There's a thread running through the Xbox presence at E3, and the platform changes Microsoft is demonstrating may be the strongest personification of them.

Earlier this week I went to an appointment demonstrating "the platform" — and it was showcasing where the Xbox One is going. The biggest day-to-day change is clearly the New Xbox One Experience, a callback to the Xbox 360's own massive UI overhaul in 2008. I was shown the updated Home screen first, which Microsoft's Richard Irving, group program manager for Xbox One, demoed with Larry "Major Nelson" Hyrb earlier in the week on Xbox's E3 livestream. Irving made it a point to zip around the UI quickly, something that is impressive on a very practical level. I don't think a single regular Xbox One user would argue that the home screen is snappy, but Irving practically zipped through the new, vertically aligned recent games list, and also showed how the right and left triggers could be used to jump from the top to the bottom of the list and vice versa instantly.

Irving also explicitly referenced the Xbox 360 in their presentation when talking about the revamped social tools, which is, once again, being referred to as the Guide. The Xbox One guide contains all friend tools, such as online status, messaging, party invites, and more, and it overlays no matter where you are in the system with a double press of the Xbox button on the Xbox One controller.

All of this was a very slick, reasonably exciting promise of the future for Xbox One owners, but when Irving went on to show the guide at work during gameplay, clicking on Fable Legends from the home screen, he admitted that this was actually bringing up a video of gameplay, rather than something in real time. 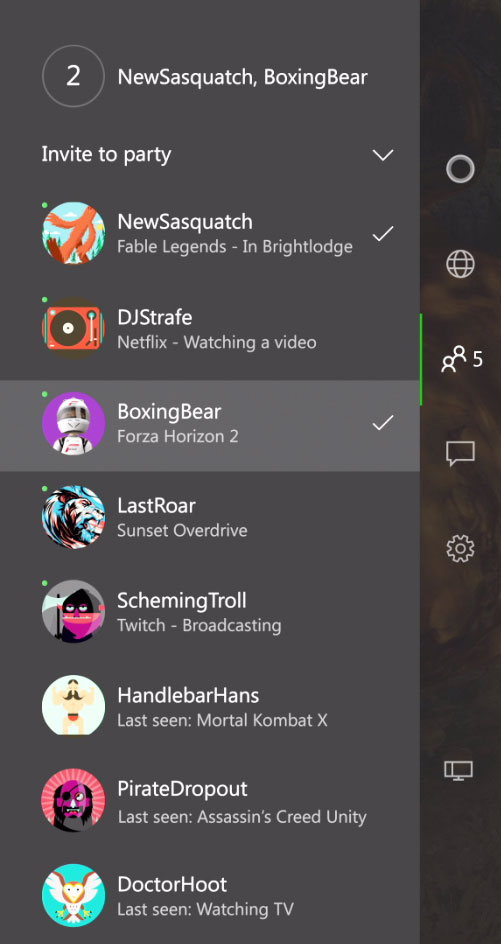 This is E3. I am aware of the compromises made to show non-final things in settings that demand a perfect showing, and that smoke and mirrors doesn't always mean a lie or bad intentions. The fact that Microsoft used a video instead of a much more system-intensive game or application doesn't mean that the promises they're making with regards to speed and responsiveness are false. I think Microsoft has taken great pains to be direct with fans and owners of the system about where it's at and where they want it to be.

All that said, I will remain optimistically skeptical that the UI we get this Fall is as fast as what we're seeing here.

I'm less skeptical about Microsoft's implementation of its Cortana personal assistant tech on Xbox One. As a Windows Phone user — there are like five of us! — I've used Cortana a lot, and her voice recognition has been excellent. Applying that contextual search and personalization to the Xbox One seems like a great means to make social interaction more hands-free on the console.

There's a different challenge here though. While every Xbox One shipped with a Kinect at launch, the landscape has changed dramatically in 19 months since. I feel comfortable in speculating that most Xbox Ones sold now do so without Kinect included. Currently, Cortana on Xbox One will only respond to audio cues via that peripheral, courtesy of speaking "Hey Cortana" while playing or otherwise using the console. Cortana does appear to support manual text entry using a controller or Smartglass connected phone, but, well, that sort of defeats the point and the inherent coolness.

To underscore my earlier skepticism about the new Xbox One UI's functional state, as the demo moves on to discuss backwards compatibility, our presenter switches inputs on the television and uses a different Xbox One console. As for the backwards compatibility, which is available now for a very small selection of games to Xbox One preview program members, well, it works. That's the plainest and yet most dramatic way of stating it. The presenter was playing Borderlands for Xbox 360 while speaking, and that in and of itself said plenty, along with the people on staff at Polygon who have turned on their Xbox Ones this week to find games like Super Meat Boy and Viva Pinata available in their Xbox One libraries. Also, for Xbox One players with Windows 10 PCs, you can stream Xbox 360 games just like you would any Xbox One game.

It was surreal watching the presenter hold the menu and back buttons to bring up the original Xbox 360 guide within Borderlands. When you play multiplayer 360 games on Xbox One, everything is handled through that guide. Everything works with those last-gen services.

Backwards compatibility does have some interesting political wrinkles, however. Microsoft has to secure permission from every publisher on a per-game basis to offer backwards compatibility for their titles, and Microsoft says publishers have been cooperative thus far, citing examples like Mass Effect — a game which has repeatedly been rumored to be in the running for the remaster treatment — and Fallout 3, which Bethesda is actually giving away to customers who buy Fallout 4 on the Xbox One. I'll be more curious to see if games like Dishonored, or, say the 2013 Tomb Raider get backwards compatibility, given the existence, right now or in a few months, of "remastered" versions of those games. Microsoft won't speculate about the games that will be added to the service over time. Also, last-generation Kinect titles will never be made backwards compatible.

Because I'm that guy, I asked late in the appointment if backwards compatibility for the Xbox is on the horizon, and — after a couple of minutes of the kind of "who's on first" confusion anyone could have predicted when Microsoft named their third Xbox console the Xbox One — I was told that it isn't currently being planned. I suppose this isn't surprising, given that the very existence of local backwards compatibility seemed like a pipe dream a month ago, and that the original Xbox is now 14 years old. But seeing Xbox 360 games run, complete with the Xbox 360 guide in place, it's hard not to let the imagination wander a little bit.

Also, I really want to play Ninja Gaiden Black again, because I have problems letting go.

There are still lots of unanswered questions. Microsoft says the update to UI is coming this Fall, but Fall is a pretty big window. Also, last year's big OS update for PS4 caused a decent-sized bit of havoc with some games, causing them to crash repeatedly and generally screw up system stability for a week or so before Sony issued a patch to fix things. With as many high profile games as Microsoft has coming to the Xbox One this fall, it's not a position they want to find themselves in. Also, there's no ETA on when a similar, needed update will hit the Xbox Store, or how deeply the UI improvements will reach beyond the home screen. This is all foundational — important, and obvious to be sure, but these are bricks being laid.

That foundation is the thread I mentioned earlier — this E3 finally feels like we're getting glimpses of the Xbox One that Phil Spencer's Xbox division would have built, if he'd been calling the shots in 2013. It's two years late, but as that vision becomes more clear, it's a lot easier to be optimistic about where the Xbox One is going.