There was a time, not terribly long ago, where Guitar Hero and Rock Band were more or less all I played. I'd head over to my buddy Nick's house, and we'd pass around the instruments or take our band — Tequila Mockingbird, if you're curious — on the road over and over. We'd play songs. We'd master them. We'd buy albums like Nirvana's Nevermind when they hit the online store. I still have a Guitar Hero/Rock Band playlist in iTunes.

I left my drums and guitars over his place. He got the pro guitar and keyboard. We played on Expert. It was, in short, the most inherently social game I’ve ever played.

And then, after a few years and what must have been several hundred hours, we just kind of … stopped. No real reason, no clear explanation. We just moved on, like the world of The Dark Tower.

I missed it from time to time, but I never really went back. My instruments, beat up and overplayed, got flaky as the hardware aged. Double strumming became unavoidable, when they strummed at all. We moved on.

And yet, when developer Harmonix Music Systems announced the game’s revival early this year, I knew I was ready. This was the excuse I’d been waiting for. After a five-year hiatus, I saw a future where plastic instruments were part of my life again.

Harmonix’s pitch for Rock Band 4 suited me just fine, too. It is vastly different from Activision’s for Guitar Hero Live. Whereas the latter decided to evolve the formula in a myriad of ways with features like full-motion video, a different on-stage perspective and a new six-button setup, Harmonix took a different approach.

Implicit in Rock Band 4’s design is the proposition that, on the whole, they mostly got it right the first time. The new game is more or less what the old games were. Or at least I thought. When I went hands-on with Rock Band 4 at E3 2015, I learned about a new and unbelievably cool new feature, proving that Harmonix may be content with the basic structure, but it isn’t above mixing things up. In Rock Band 4, you can play your own solos.

Now, having played Freestyle Guitar Solos, I’m even more excited to welcome plastic instruments back into my life.

I'm onstage, playing Fleetwood Mac's "You Make Loving Fun," and it's time for a solo. Instead of playing along with Lindsey Buckingham's perfect hammer-ons and pull-offs, I play my own, with button combinations and strum patterns that produce a seamless series of new riffs. And I kind of can't believe it's working so well.

Harmonix wanted to do this for a long time. They just couldn’t figure out how. It was only within the last year or so that the developers invented the breakthrough.

Here’s how it works: Rock Band 4 will ship with a library of solo licks, which is guitar player speak for short bursts of notes. That's all behind the scenes. They're designed for playing solos, and the game will load them on the fly, use in-game amp modeling to make them sound like part of the song and shift their pitch to mach each song's key as you play — all based on what you're doing with your fingers.

It's scored, too. Harmonix gives players general guidelines but lets them make choices within them. You might have to play high or low on the fretboard, and you might have to strum slow or fast, as directed by what's scrolling down the screen, but the rest is up to you.

See the glowing orange bar on the right side of the scrolling fretboard? That's Rock Band 4's way of telling you to play the little buttons high up on the neck of your plastic instrument.

Every button combination has its own lick, which creates dynamic solos. For example, when playing Spin Doctors' "Little Miss Can't Be Wrong," I needed to play high on the neck for a bit, and strum on the beat. Pressing the green fret button by itself would produce one sound. Pressing green and its neighbor, red, created another. Green and orange, way across the neck, played pleasing octaves. And there are even brief interludes where you can play whatever you want, wherever you want to play it. I could see myself memorizing each key combination, pulling them out as appropriate after hours of experiments.

There's a learning curve, but it's minuscule. This is about me and you jamming, with very few constraints. It changes Rock Band from consumption to creation. They're chords, really, translated into solo licks. It's not the same as picking up a real guitar, but it's a heck of a lot closer than plastic instruments have ever been.

Harmonix thinks of Rock Band 4 as "true music entertainment platform," and you should, too. It's not meant to be annualized. It's the foundation on which the developer will build the franchise's future.

The same applies to its instruments, created once again by Mad Catz, which is also co-publishing the game. To look at them is to see what you've always seen in Rock Band. You have to pick them up to notice the difference. 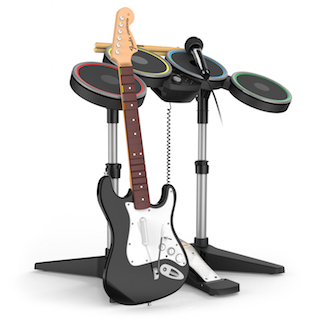 Mad Catz' global PR director, Alex Verrey, said the guitar controllers are all-new. They're more durable. They feel less like, well, cheap plastic. The buttons, once squishy, are now clicky, no matter where you press them. The neck doesn't bend so easily.

Gone is the tiny mechanical ball that used to slide inside to activate Overdrive. It would get stuck — a lot — so they replaced it with an accelerometer, just like your smartphone uses to figure out when you've rotated it. Even the strum bar is different inside. The mechanical switch is now replaced with a digital one, built to last many more strums than its predecessor. It feels the same, though, soft and flowy, unlike the clicky experience you have with Guitar Hero controllers.

The drums, though, are my favorite.

My friend Nick and I beat the ever-loving crap out of our kit. Not purposefully, just from use. At a certain point, our drum heads started to look like dented cardboard. Mad Catz seems to understand this problem, and though I didn't play the kit during my time with the game at E3, I did take time to feel it up. Like the guitar, it is noticeably more rugged. It seems like it'll take more abuse, and even the kick pedal, which we snapped in half on the old kit, has been reinforced.

Verrey is quick to point out, though, that the only way to guarantee you'll get a plastic drum set when the game launches for PlayStation 4 and Xbox One on Oct. 4 is by pre-ordering the game. He's almost apologetic. He says he knows gamers are rightly skeptical of preorder come-ons, and he understands why people would choose not to. But these instruments are costly to manufacture, and the best way for Mad Catz to figure out how many to make is to look at pre-orders.

They're pricey, though. The game, a guitar controller, a drum controller and a microphone will set you back $249.99. That's nearly as much as the consoles you'll play them on.

Rock Band 4 is an evolution, not a reinvention. As far as I can tell, it's mostly everything I liked about the franchise, plus a killer new feature and sturdier instruments. And that's a-OK with me.

On my best days, I was probably a better-than-average Rock Band player. But all it took was a trip to a local church festival to watch an 11-year-old breeze through "Green Grass and High Tides" on Expert to put me in my place.

Still, Rock Band was never really about being the best. It was about having fun and challenging myself to do better. It was about doing all of these things with friends who loved music and could play along, regardless of their skill level.

It's been a few years since Nick and I had a Rock Band party. After playing Rock Band 4, I'm ready for another.