Share All sharing options for: That time I met Tony Hawk and his enthusiastic developers but was unmoved by their game

At E3, as in skateboarding, the idea is to put your best foot forward.

In the weeks and months leading up to gaming's biggest week of the year, developers, publishers and celebrities (who are sometimes both) create the best representations possible of their products. What we see exists in various stages of completion, but it's common knowledge that whatever's on display is the result of an extraordinary amount of effort to put the best they have on display.

That generally works out well for game makers. Hands-on and hands-off demos, first looks and all manner of polished vertical slices play well. They impress. They create the interest they're designed to foster. Keep an open mind, and you can even find surprises, like Transformers: Devastation.

Generally, but not always.

At E3 2015, we spoke with the developers of Tony Hawk's Pro Skater 5 who are indescribably enthusiastic about bringing the franchise back. We met Tony Hawk, who plays an integral part in the development process and exudes gratitude to the fans who made his series' resurrection possible. And we looked at Tony Hawk's Pro Skater 5. Its developers showed us a single skate park, a playground that erases the franchise's complications and replaces them with classic, arcade-style aerobatics. This is a return to the roots. This is about skating, alone or with friends. And some of the biggest names in the sport are on board and in-game.

The excitement, the wonder, the ebullience on display from everyone involved is beyond what's normal, even for a week that's built upon hype. And every ounce of it feels genuine.

But here's the problem: For all the excitement, for all the anticipation, Tony Hawk's Pro Skater 5 looks, well, kind of lame. And that's not an adjective you want to inspire when trying to pull of a sick 900.

To be clear, I was never super into the franchise or the sport, so I am somewhat removed from the hype train. Knowing that skaters like Lizzie Armanto, Leticia Bufoni, Chris Cole and Aaron "Jaws" Homoki are in the game is interesting, but not exciting. Your mileage is bound to vary, based on name recognition and your desire for companies to fill the void left after this franchise and others departed a few years ago.

I didn't see the game alone, though, and as others wrapped their hands around the controller, they seemed pleased. I watched smiles spread across their faces as they grabbed their virtual boards, skated wherever they wanted and pulled off sick moves with little effort. The upshot was clear: This is a game designed with old fans in mind, and it won't be difficult to pick up. But it was also frankly jarring to watch.

Video games have become a kind of spectator sport over the last few years, thanks to the rise in popularity of services like Twitch and eSports juggernauts like League of Legends. Watching someone play a game sounds odd at first, but really we've been doing it for decades on couches with our friends. Controller in hand, Tony Hawk's Pro Skater 5 may feel wonderful. But watching it on TV, it looks kind of silly. 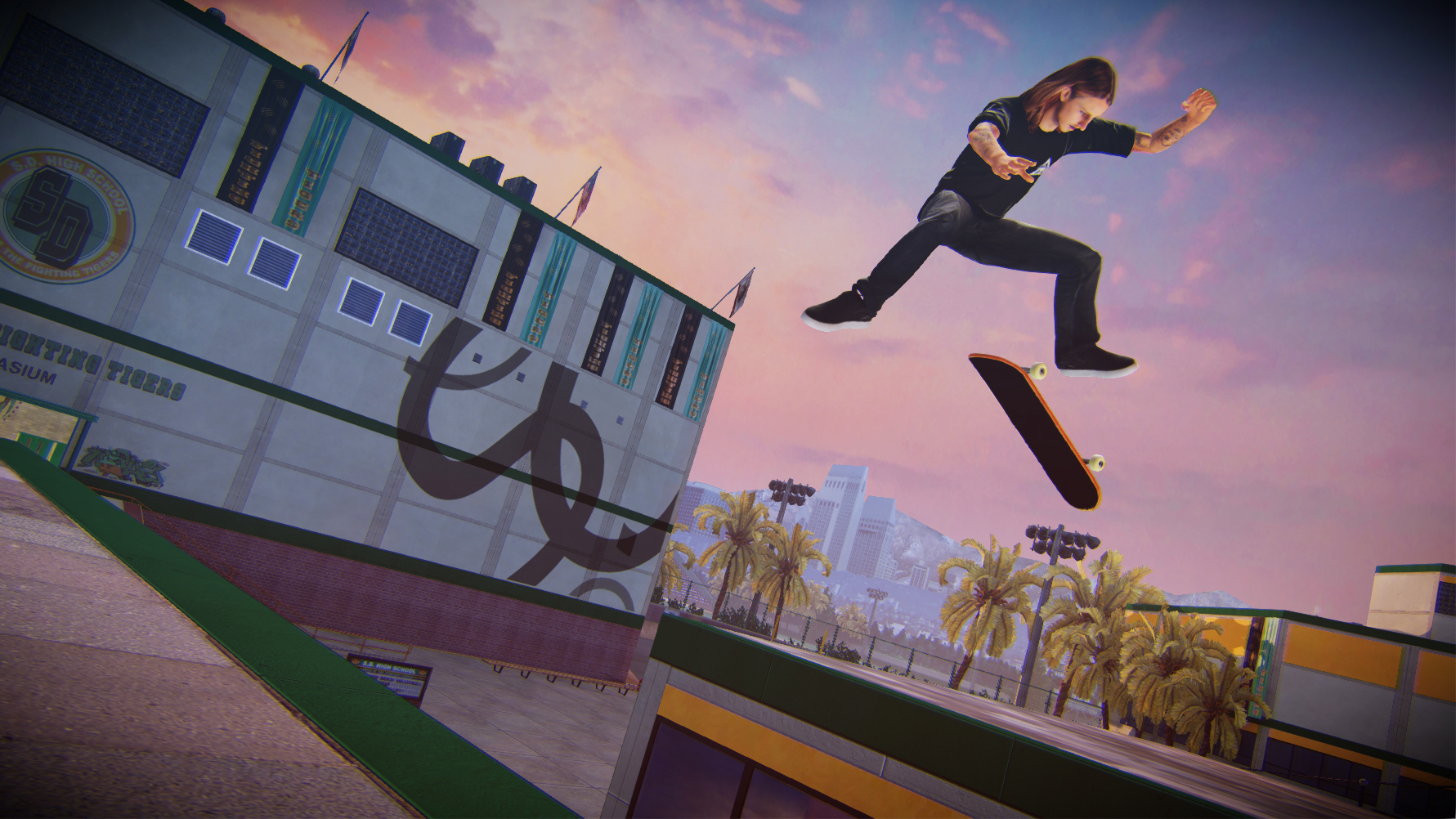 There is very little realistic in its presentation, even though it's built on a library of motion capture, much of it from previous games. This is not necessarily a problem. In fact, it's a representation of the underlying design. Tony Hawk's Pro Skater 5 is not a realistic simulator. It's not designed to be the skateboarding equivalent of Gran Turismo. It's designed to let players look like skaters as they role-play as skaters, bending and often outright ignoring real-world physics.

Of course, this is a video game, and we're used to suspending our disbelief for the sake of fun. It happens all the time. First-person shooters wouldn't be any fun if you fell to the ground clutching your gut from a single bullet wound. Instead, developers bend the rules of real life. I can't knock Tony Hawk's Pro Skater 5 for that.

It doesn't present well, in other words. It doesn't look great. Skaters seem wooden, like automaton mannequins. As I watched players bounce off walls as their in-game avatars ignored the impact, it made the game come across as somewhat underdeveloped. And they certainly don't look like they were born to shine on PlayStation 4 and Xbox One.

This is a game in development, though, and there's still time for polish before Tony Hawk's Pro Skater 5 is released on Sept. 29 and later for PlayStation 3 and Xbox 360.

I wasn't overly hyped about the franchise returning, and the demo didn't do anything to sway me in its direction. But I'm not the target demographic for Tony Hawk's Pro Skater 5. I fully acknowledge that this is a game built, in part, to satisfy longtime fans who aren't me. And the effort and enthusiasm on display from everyone involved proved to me that their hearts are in the right place. But concentrating so much on them isn't likely to wow others like me, who, somewhat confused, are likely to see the oddities. Then again, based on what I saw, even if it didn't look so great, it might be exactly the game the hardcore audience is looking for.

For the rest of us, well … maybe not so much.