Total War: Warhammer is some super nerdy fantasy that somehow won’t intimidate you

Share All sharing options for: Total War: Warhammer is some super nerdy fantasy that somehow won’t intimidate you

In 2001, during production of Peter Jackson's The Two Towers, the filmmakers ran into a problem.

The movie's climax, a massive battle at the mountainside fortress Helm's Deep, involved a cast of thousands of computer generated orc monstrosities. It would have been impractical to hand animate each digital actor, so the special effects wizards at Weta Digital wrote computer algorithms that allowed them, in effect, to think.

Armed with digital implements of destruction, the Uruk-hai marched on the fortress and, as The Battle of Hornburg began, promptly ran away.

It was a great marketing story, told as if Weta created orcs so smart that, when confronted with their own mortality, they headed for the hills — literally. But that wasn't exactly true. Instead, Jackson's special effects shop had done what any video game maker does: created a form of artificial intelligence that governed the moves of the masses. Their first attempt didn't work out. They tweaked it, and the armies of men and orcs fought for the fate of Middle-earth.

The Battle of Helm's Deep was a stunning sight to behold in 2001, a time when CG effects were just becoming photorealistic. And to pull that off, Weta needed unfathomable amounts of computing power, the likes of which were far outside the reach of video game consoles and even the best PCs.

I couldn't help but think of The Two Towers nearly 15 years later when I saw a live demo of Total War: Warhammer at E3 2015. There, behind closed doors, developer The Creative Assembly showed off a massive battle set in a high fantasy world filled with opposing armies on a massive battlefield. Only this time, it was happening in real-time, on a PC, and the developer controlled the camera. As thousands of troops went to war, their creator panned and flew and zoomed around, in a sense directing his own version of Helm's Deep.

It was as impressive as the battle was massive.

Like all things, Total War: Warhammer seems obvious in hindsight.

Total War developer The Creative Assembly, its owner Sega and Warhammer license holder Games Workshop announced their partnership way back in late 2012. They didn't say much about what would come of it, beyond that it was a multi-project agreement, the first product of which was some years away from release. 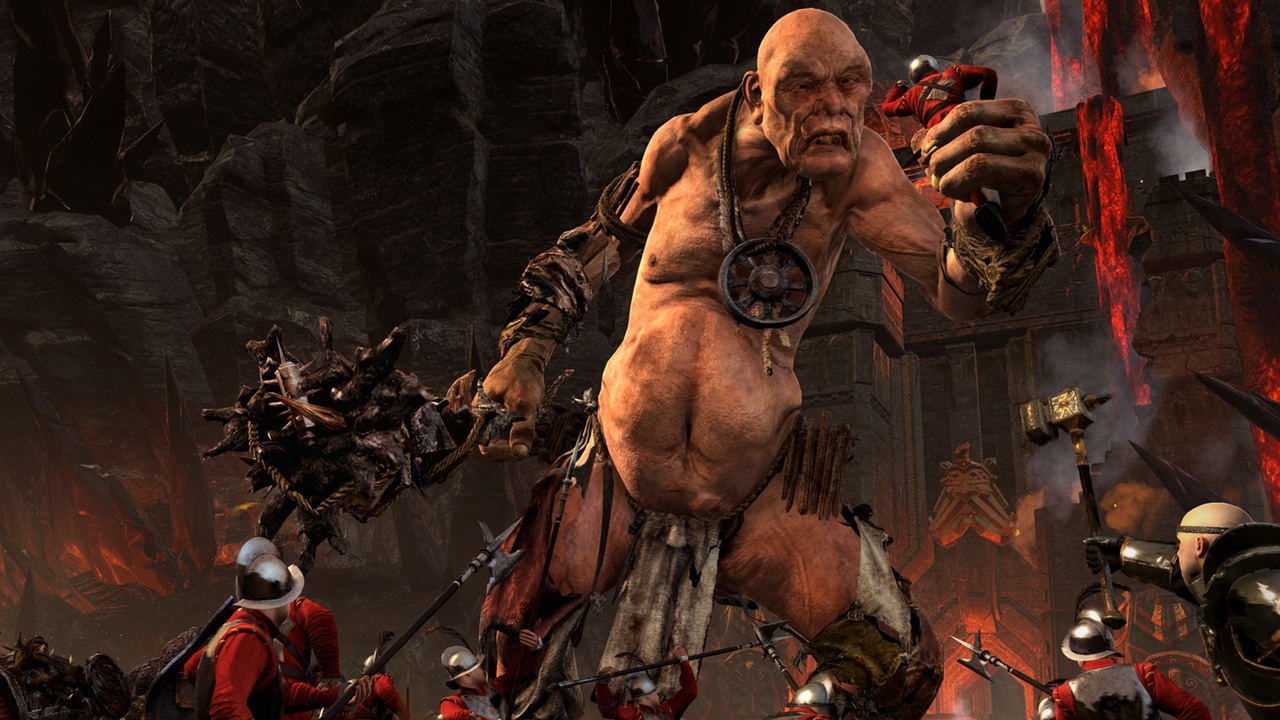 Mann appreciates the Lord of the Rings comparison, but he's understandably eager to talk about what he calls Warhammer's "archetypal fantasy" that The Creative Assembly gets to use.

"Anything you can think of from fantasy, they brought in. And they've been doing it for 30 years. They've been introducing the fantasy units [that] the Games Workshop guys get really excited about, and bringing those in the game as well. We're being given this amazing canvas that we can just take bits from and really fill out. But also, at the same time, you're also getting a full Total War game and everything you would get here."

In April 2015, when we learned the details of the first game, we could have seen it coming. The 27-year-old game maker, perhaps best-known known for its work on the Total War series of historically-based real-time strategy games, was merging its RTS prowess with the lore of the Warhammer universe, which spans tabletop, pen-and-paper and video games, to create Total War: Warhammer. Even the name seems obvious.

"Everyone said that," Simon Mann, a battle designer at The Creative Assembly, says with a giggle. "It's like, this is totally obvious."

Even if the genre and setting aren't surprising, Total War: Warhammer — an opening salvo to be followed by two expansions — still managed to impress. Like The Two Towers before it, the RTS isn't based on entirely new material, but seeing two enormous armies waging war on a PC is a sight to behold. It really is like Helm's Deep, which is among the first things we said when we speak with Mann.

Mann said that the game has been in development since about the time of the original announcement, though it only recently entered full production. A relatively small team at The Creative Assembly spent much of the last couple of years prototyping the game and becoming experts in Warhammer lore.

Armed with that knowledge, the studio gets to do something new.

In Total War: Warhammer, as in life, green skin is bad. But to The Creative Assembly, it's exciting.

When creating other Total War games, its developers are restrained by history. Napoleonic and Roman wars took place at certain times in certain places with certain weapons and certain troops. A Feudal Japanese Setting changed the series up a bit, but the tether to historical accuracy remained strong. In Total War: Warhammer, developers are freed of those constraints, setting the game in a universe where goblins ride giant spiders into battle and giants destroy their enemies with the brute force of modern-day tanks.

According to Mann, The Creative Assembly is treating Warhammer with the same kind of attention that it treats its games based on real-world history. Only this time, it's about the history of a high fantasy world.

They're making greenskins, the overarching term for Warhammer's motley collection of goblins and orcs and other evil abominations. Each was on display at the Battle of Black Fire Pass, which we watched unfold at E3. Though it pits dwarfs and humans against goblins and orcs, it is also a historical battle in the Warhammer universe. And The Creative Assembly knows its history.

"It's something people really haven't explored very much," Mann says of the deepest corners of Warhammer lore. "There have been a few great games around the franchise. No one's really gone to the depth that we're trying to go to, with the unit fidelity between the tabletop game and the video game. These units are taken straight from the tabletop game. Literally, put them side-by-side, and you wouldn't know the difference."

And the attention to detail shows. I didn't know it at the time, but what I saw was a historical creation. On Total War: Warhammer's battlefield at E3, leading an alliance of men and dwarfs was Karl Franz, astride a flying griffin, wielding his legendary Warhammer Ghal Mara.

"I think our main goal with it is authenticity"

This means something to those versed in Warhammer lore because Warhammer: Total War is being built with deep lore in mind. But the appeal, from the perspective of someone who really isn't, is still there. You don't have to be an expert in an alternate reality to appreciate what's happening. and in Total War: Warhammer, you'll be able to make the armies of men or monsters your own.

Based on what we've seen, knowledge doesn't seem to matter. The scale, the variety — even with a basic understanding of creepy fantasy characters, the upcoming strategy game grabs your attention. And that, as it happens, is exactly what The Creative Assembly was hoping for.

"I think our main goal with it is authenticity," Mann said. "For someone who maybe wants to get interested in the Warhammer franchise, we don't want to make stuff up for you. If you start playing this game and listening to the lore, this is the canon law you're learning. This is just another awesome way to get into the Warhammer universe."