Share All sharing options for: Valve's manual for the Vive virtual reality dev kit is as fun as you'd expect

Update: Here is a link to the official source.

Valve and HTC have begun shipping Vive development kits to a lucky few developers, and the hardware comes with a manual that's everything you would want from a manual designed by Valve.

Here is the full manual, with a few notes from us on what it all means. Click on each image to see it at full size.

The first page shows some happy VR enthusiasts in what appears to be a normal living room, complete with a cat, so we're already in good hands. The Vive can allow VR experiences that require up to 15 feet by 15 feet of empty space, and this seems to indicate that most people will work in a space that's a bit more normal. 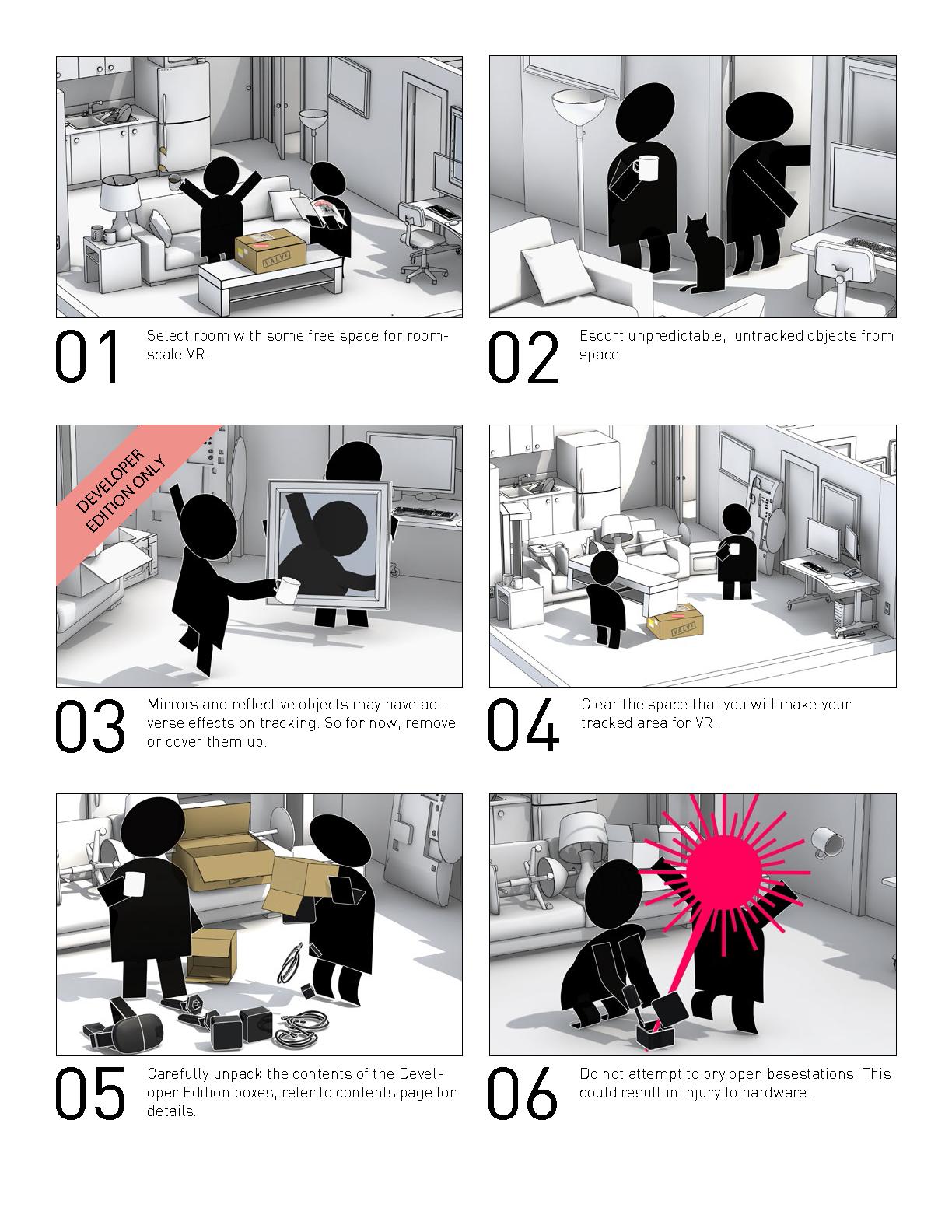 Wait, no. I spoke too soon. You're going to have to free up space to use the hardware, and it's interesting that mirrors are only going to be an issue for the development kit. I wonder how they're going to fix that for the final hardware? Also, be sure to get that cat out of there. You don't want to step on it. 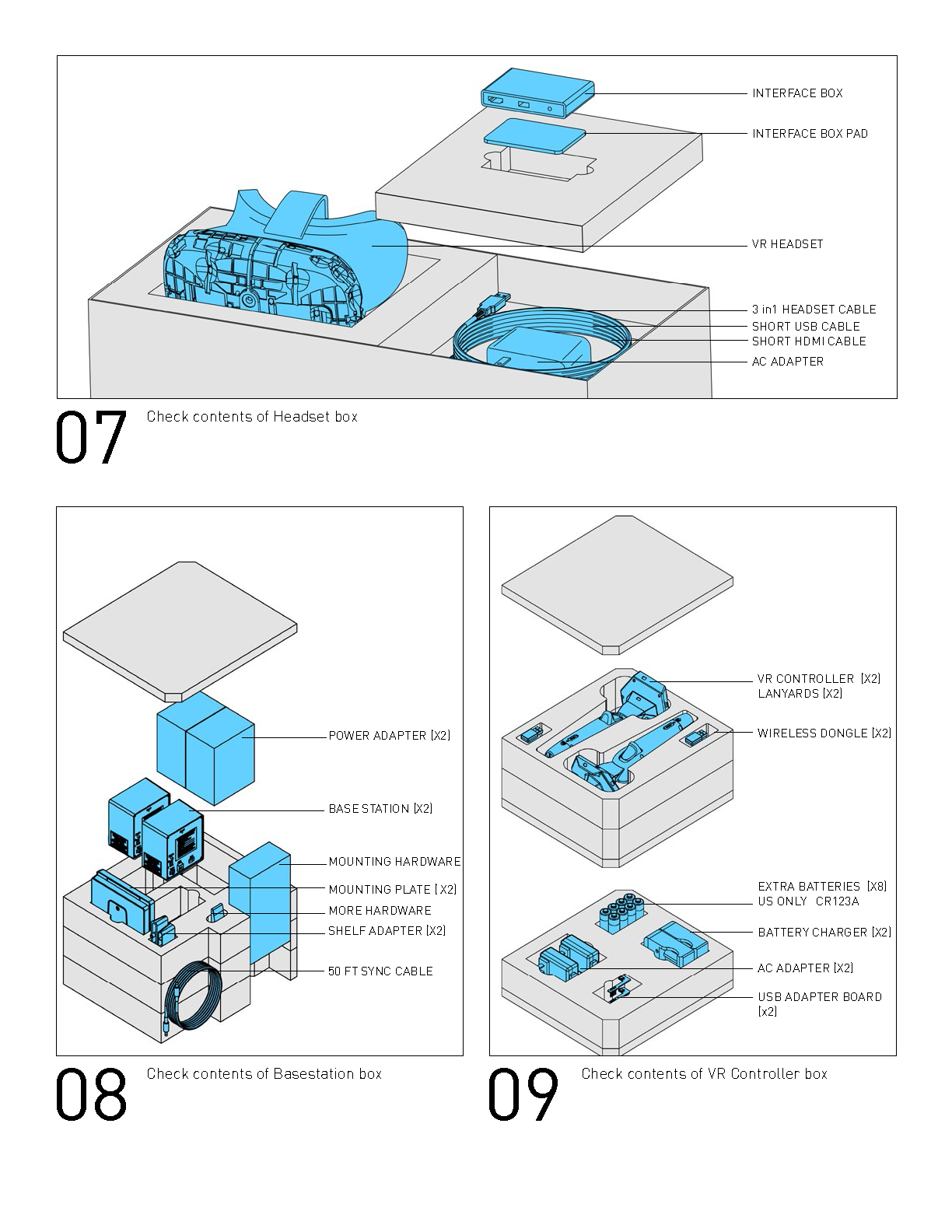 This is the hardware that comes with the package, and it's pretty extensive. It's likely that the fit and finish will be improved and a few things will be streamlined for the retail unit, but it's also likely that the final product will include most of what you see it. Those lighthouse stations will need to be installed near your ceiling, so even if you're not planning on using a lot of space, this thing will impact you environment in at least a small way. 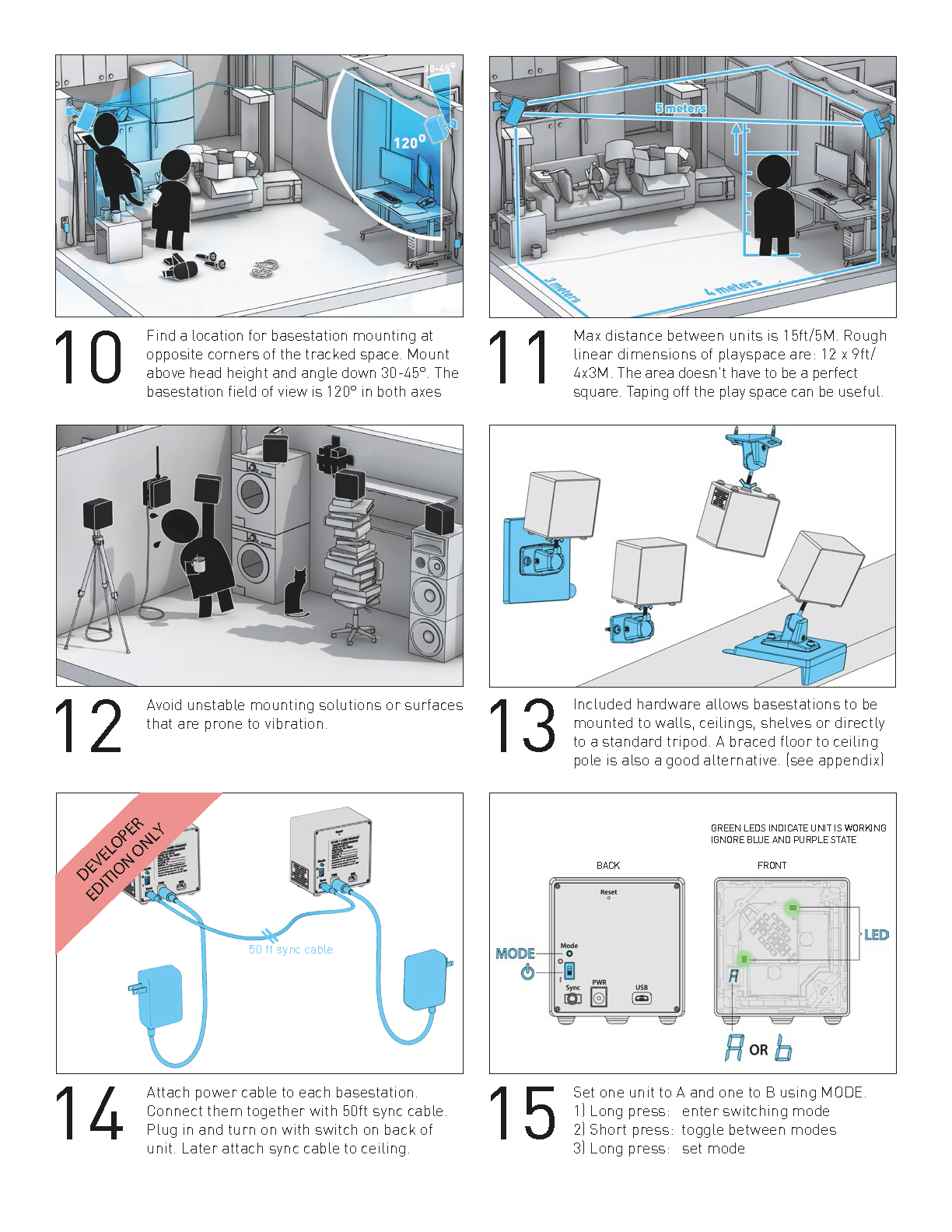 This shows you all the work you're going to have to put into your room if you want the full VR experience, but again it's likely that the retail unit will also stress that you don't need the full amount of space to enjoy most VR experiences. This is for the development kit, and for people who want to take advantage of everything the hardware can do. Still, it makes one pine for the simpler days of the Kinect, huh? 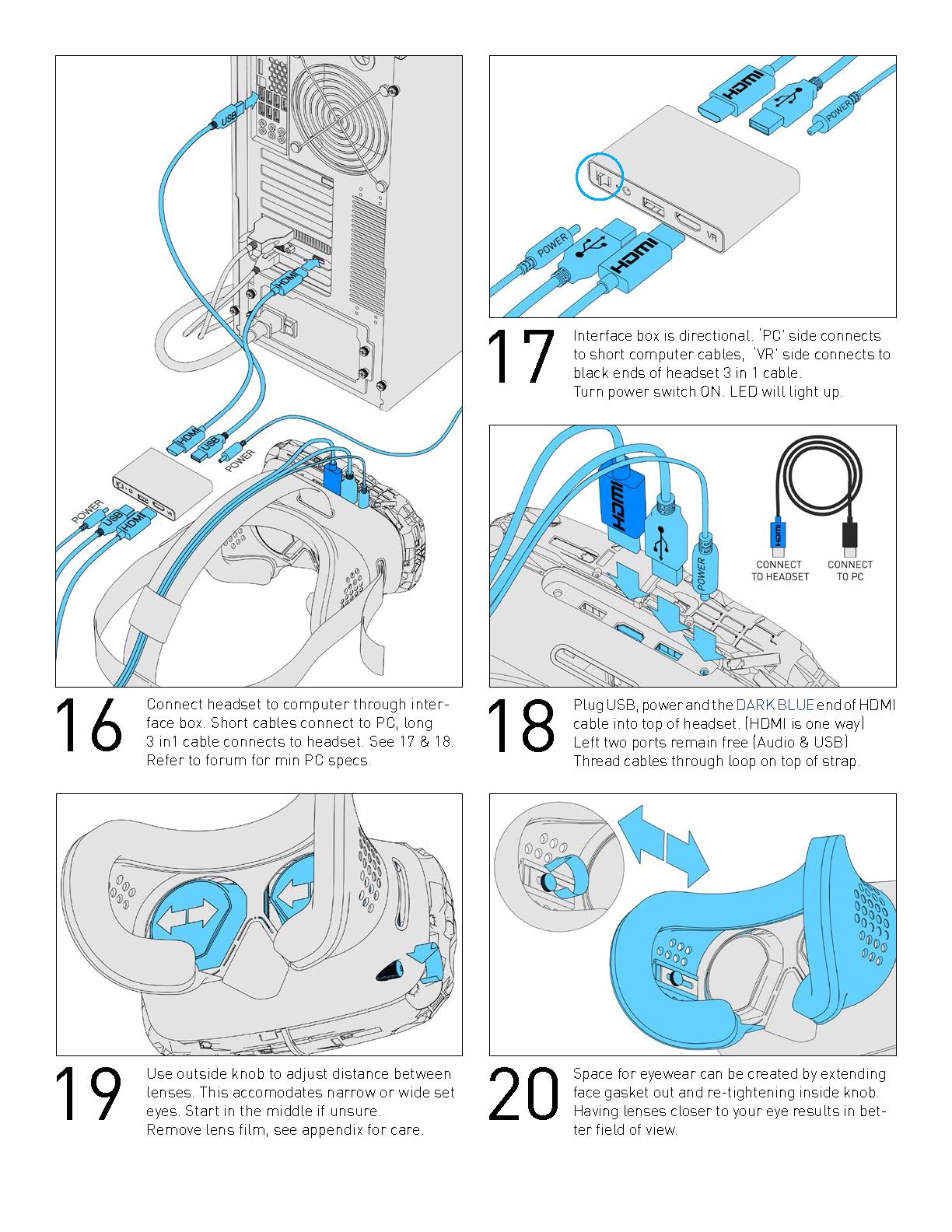 All kinds of interesting stuff here. You'll need to connect three cables to the breakout box, and you'll be able to adjust the distance between your eyes as well as create enough room for your glasses. My first demo with the Vive was played with my glasses on and it felt fine, so I can only assume that the final product will be even more comfortable.

If virtual reality is going to take off though, it has to be as simple to connect as a VCR. It may be simplified for the retail release, but would you be comfortable setting this up? Would your parents?

Some more detail on the two included controllers. These are a big part of what makes the hardware so magical; the touch pads and buttons give you plenty of options for interactivity and being able to "see" your hands in the virtual space does wonders when it comes to removing simulation sickness and locking you into the virtual world.

These controllers are going to raise the price of the Vive above many other virtual reality devices in all likelihood, but they're also going to bring huge value to the platform.

The development kit supports a battery operated mode as well as wired mode, and suggests you use the wrist lanyard so they don't fly out of your hands. There is also a USB hub that helps with reception. Again, this is very cool stuff in action, but it's also a lot of hardware to keep track of and install correctly. 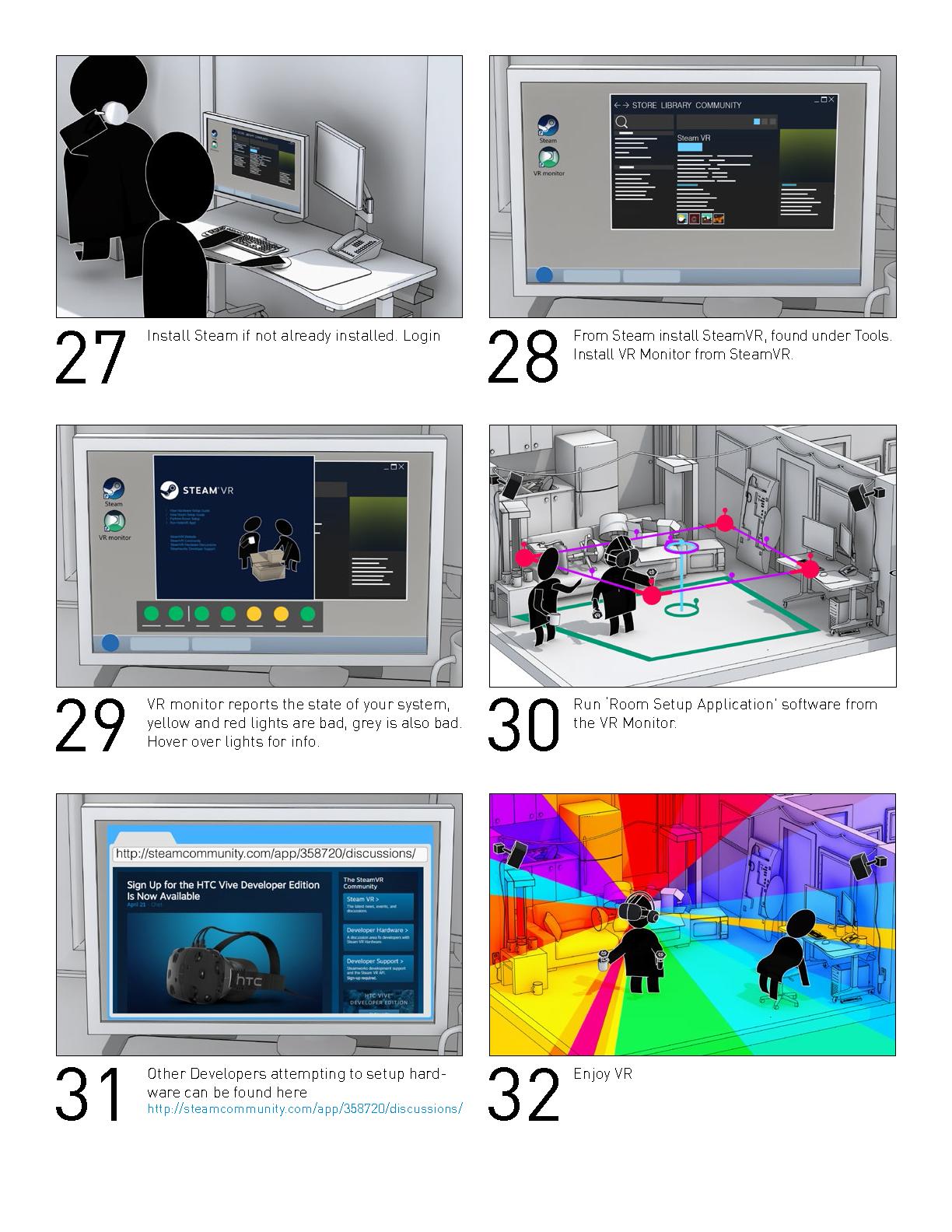 Setup and trouble-shooting seems to be simple, which may not mean much to non-developers out there but getting the Oculus Rift Development Kit 2 up and running can be something of a nightmare right now. If this is as easy as Valve is suggesting, that's a major advantage. 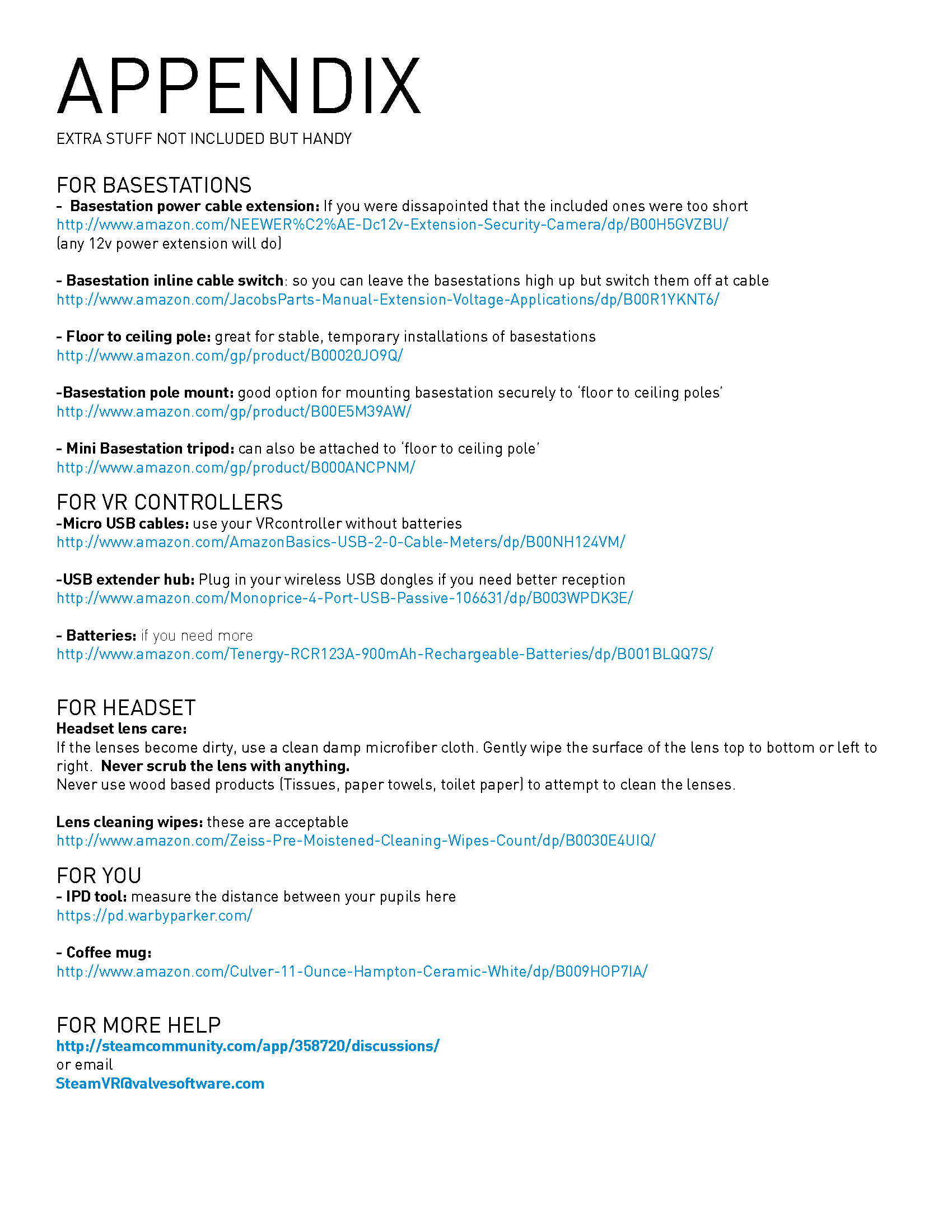 This is all the stuff the development kit doesn't come with, but could be helpful. The guide contains direct links to buy the hardware on Amazon, making it super-easy to make sure you get the right thing. Expect Steam to stock Vive accessories and replacement parts before the retail version is released.

Lord of the Rings: The Rings of Power will premiere with two episodes