Share All sharing options for: BioShock Infinite speedrun vastly more complicated than the game's own plot

You don't see many first-person shooters played by the speedrunning community, and you see even fewer make an appearance at the biannual Games Done Quick charity marathons. But early this morning, during the third day of Summer Games Done Quick, an epic run of BioShock Infinite occurred.

It was a thing of beauty, committed by FearfulFerret — the current world-record holder for the game. You've never seen Booker DeWitt move this fast before, so let's spend a little time breaking down the two strategies that made it possible.

In BioShock Infinite, just about every time Booker dies he's revived by Elizabeth. Her aquiline features are the first ones that you see as she casually reaches across time and space to resurrect you from the exact spot where you passed away.

What FearfulFerret was able to do was purposefully kill himself, often by shooting rockets at his feet, while simultaneously flinging himself against locked gates and other obstacles. As he died, his avatar's body would find its way through the obstacle and Elizabeth would be there to catch him on the other side.

By "deathwarping," as it's referred to, he was able to skip past entire acts in the game.

The ghost of Comstock's wife? Don't know who you're talking about. Comstock House itself? The bit with all the weird, pint-sized enemies in masks? Never saw them at all. FearfulFerret was simply moving too fast.

After a certain point, he had to be careful that he didn't move too quickly or in the wrong directions. If he had, he would have broken the game. Elizabeth wouldn't have followed him to certain areas, or environmental triggers would fail to occur. He moved just as fast as he could, skipping areas at a graceful clip, to avoid "soft locking" the game.

At times, the biggest obstacle to moving forwards was making sure he had killed all the enemies behind him, leading to several strategies that resembled the old Tecmo Bowl glitch. He had entire waves of enemies following him around the map like pets, only to be efficiently and effectively mowed down when the time was right.

After a while, his health bar itself was the only barrier to moving even faster.

The secret to moving at world-class speeds through the game is an obscure item called the Hill Runner's Hat. Most players will never come across it. Early in the game, there's only a three percent chance it will spawn in a specific location. But it's so necessary that runners will spend minutes going back to the same crate to find it before they move on. 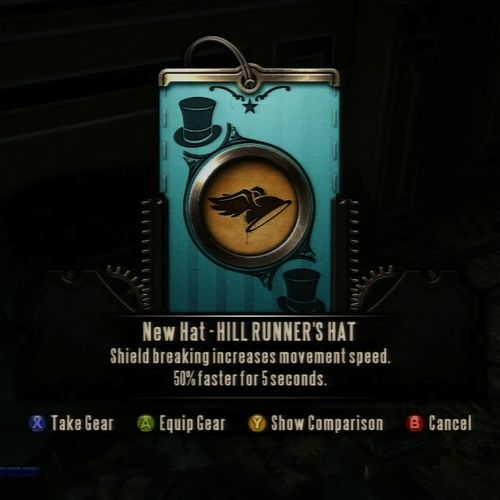 When Booker's shield breaks, the Hill Runner's Hat gives him a 50 percent speed boost for five seconds. Using that to his advantage, FearfulFerret continued to fire rockets at his feet nearly the entire game. By staying just on the edge of death at all times, he was able to speed through long sections of the game.

At times, he even outpaced Elizabeth herself which, given her preternatural ability to bend space and time, is quite a feat indeed.

Wipe away the debt

The speedrun culminated in a terrific display of gunplay. Throughout the game, FearfulFerret only used four different weapons, but during this final stretch he relied mostly on the Handcannon, Booker's iconic sidearm, to wipe away the debt of time he'd created during slower portions of the game. You can watch a selection of the video, soon to be archived on GDQ's YouTube channel, below.

In the end, FearfulFerret clocked in about 10 whole minutes shy of his own personal best, the world record time of one hour, 49 minutes and seven seconds. But it was nonetheless spectacular.

He even managed to shoehorn in one of the most complete and cogent explanations of the game's storyline I've ever heard.

Warning: This clip spoils the entire game. All of it.

FearfulFerret isn't done running this week. He is one of the participants with the most hours scheduled on camera at this year's SGDQ. You can look forward to seeing him do a speedrun of Minecraft on Saturday and, in the marathon's closing hours, a much anticipated two-players, one-controller run of Dark Souls 2.

As the runners say: Get hype.