Mad Max is the fight club I expected, but I wasn't ready for the wasteland

Share All sharing options for: Mad Max is the fight club I expected, but I wasn't ready for the wasteland

Avalanche Studios' Mad Max is the least surprising game I played at Gamescom 2015, and after a long week on the other side of the world, I was happy for a bit of interactive comfort food. The only problem was that I devoured too much too fast, and some of the sweetness soured my stomach.

I've been reading about Mad Max since Avalanche unveiled the game at Sony's E3 press conference two years ago, and I can't recall anything that's happened since putting a damper on my interest. As I read and watched more about it, I got a sense of what the final game would be, and I liked what I saw. Watching George Miller's stunning Mad Max: Fury Road this year only made me more excited. I was never huge into the franchise, but these last two years convinced me that I'd been missing out.

I wanted to play in this game's literal sandbox. My hands-on at Gamescom was a chance to see if my guesses were right.

I had reason to be hopeful. Mad Max is an open-world game from the developers behind a standout of the genre, Just Cause 2. It's being built under the auspices of Warner Bros. Interactive Entertainment, which has shepherded commercial and critical successes like the Batman Arkham series and Middle-earth: Shadow of Mordor in recent years. And it takes place in a post-apocalyptic world filled with human beings gone, well, mad, which is intriguing in video games and movies alike.

Mix that all together, and you probably have a good idea about what to expect from Mad Max, a game that trades Just Cause's sprawling islands for a desert wasteland and adopts a modified version of Batman's combat to hurl against bloodthirsty post-apocalyptic madmen.

I enjoyed careening around the desert, shooting and punching humanity's worse elements and pimping my rusty ride. I want to play more, and I almost certainly will when it's released.

But the demo also felt too new to be comfortable, and it's difficult to know whether I should blame the awkwardness on the game, myself or the situation. I'm leaning toward the latter because I think I can explain every problem I had with Max Max through the jarring feeling I got after jumping into a campaign 40 percent complete without any training. It wasn't ideal, but I'm not sure there was a better way to present it.

I began my 30 minutes with Mad Max by upgrading my car. This looked like fun, but I had maybe a dozen options to choose from, few of which made any sense. I had no context. The only one I immediately understood was the option to coat this bucket of bolts in a few different sun-washed shades of paint. I dared to be different, choosing black because everything else was a variation of red-orange. My handler made a few other suggestions — put some spikes on your tires! buy the boost! — and those seemed like good ideas to me. The next moment, I was speeding through the desert. 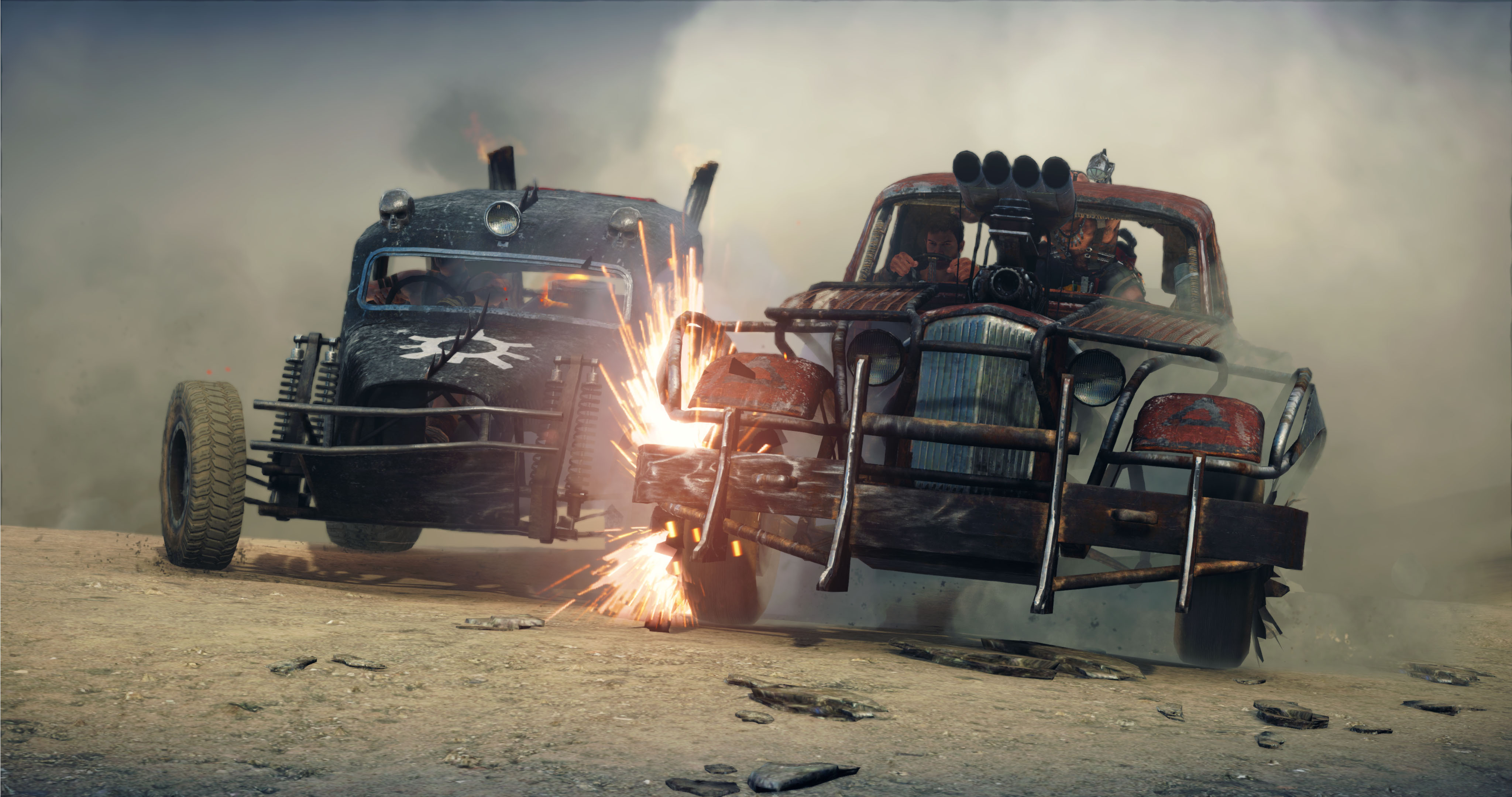 In lieu of the gradual ramp-up that players will experience, WBIE sat a helpful companion next to me. He smiled a lot, gave me suggestions and pointed out what was important as I drove through the desert with all the caution of a dog who's knocked down the trashcan. But being told how to play a game isn't ideal unless it was absolutely necessary. In this case, it was, and I had no problem taking the feedback and suggestions.

Anyone familiar with the franchise (or video games in general) won't be surprised to learn that I didn't have to drive long before encountering hostiles who wanted me dead. The first wave came in two patchwork cars. My new friend said they were really tough enemies, that I might want to — and that's where he stopped because I was already driving away. Pride, I decided, was not going to be a problem. I didn't have much time to play, and I didn't really want to spend it fighting enemies out of my league.

Just up the desert road, I found a mission that had me destroying mechanically monstrous vehicles and, later, weatherbeaten trebuchets.

Mad Max's controls are unique, and they'll take some getting used to, but I didn't have time to ease my way into anything. Here's how they work: By default, you control Max, who drives. It's the standard right trigger to accelerate and left trigger to brake and reverse. No big deal. It gets interesting because there are two characters in the car. Max has an almost slithery companion, Chumbucket, who rides standing up in the back of the car, weapons ready.

The left bumper on the Xbox One controller invoked a mode designed to use my weapon-equipped partner. Fending off an attacking car, I held down LB, and time slowed down, which made it much easier to aim at my targets. I still had to drive as Max, though, which confused the daylights out of me. There were structures all around. I ran into every one of them. I learned (only because I asked my handler friend) that the time-slowing mechanic lasts as long as you hold the bumper. I must have been easing off of the accelerator or LB without realizing it, confused as to why my car slowed to a stop or time sped up.

In my defense, though, I was being asked to drive a car, aim a gun and track enemies as we all drove through the desert at ludicrous speed, and trying to remember all the inputs for those tasks. This, I suspect, won't be the kind of battle you'll have until hours into the game, when you've come to grips with the controls. Still, I managed, destroyed and conquered, and it was good.

That wasn't the only problem with the car, though. It seems super weird that Max's car  — christened the Magnum Opus — doesn't have a way to drift. It's an essential component of video game cars that their ass end loses traction and cuts a corner, or makes a 180-degree turn, without slowing down. The Magnum Opus always went where I pointed it, but when I wanted to turn around, it took what felt like bizarrely wide circles over the sand. It begged for a handbrake. I'd have liked to see more mobility, but it's also possible that the time-shifting mechanic, once mastered, will make that unnecessary.

I more or less got the hang of driving, blew up everything in my path, harpooned some trebuchets, ran over a few marauders and, when everything was dead or blown to pieces, hopped out of the car to make my way into a building.

Inside, I spent the last few minutes of my time with Mad Max introducing shirtless wretches to my knuckles and showing them how a lead pipe functions up close. There was even a light environmental puzzle to overcome, which added a bit of flavor to what could have otherwise been a forgettable basement.

And, just as I suspected, I got to use the knowledge I gained playing as Batman and Talion to beat my way to justice as Max. I was pleasantly surprised to learn that combat isn't a straight port of its predecessors. Just like in the Arkham games, the Y button was my ticket to blocking incoming attacks. But Mad Max has its own timing, its own tuning, its own quirks that make it feel familiar and just different enough to feel like I was learning something new. I suspect that will make it more interesting and less like a descendant.

Yes, Mad Max is the game I hoped it would be.

Surrounded by a team of thugs, I punched and blocked my way to victory, solved that simple environmental puzzle and, as I was about to leave the basement, I found a giant pipe and smiled. Punching is fun, I figured, but bashing could be even better.

That's when they announced that my time was up, but my WBIE handler friend had my back. He started talking fast, telling me where to run, what buttons to hit, how to get to the closest group of enemies before I had to leave. I followed the directions, directing Max toward confrontation. And, for the last 45 seconds of the demo, Mad Max clobbered a horde of goons with the plumbing. It was rad.

Here in mid-2015, I don't have to guess anymore. I can confirm that, yes, Mad Max is the game I hoped it would be — the game I wanted it to be, at least in terms of combat. But playing Mad Max, however briefly and under whatever weird circumstances, raised some curious new questions, too, mostly about controls. And I can't speak to missions or story structure, either, so those variables remain unsolved.

I'll be happy to answer them on my own, after many hours of practice, sometime after Sept. 1, when Mad Max hits PlayStation 4, Xbox One and Windows PC.