If NBC knows what it's doing, it'll put Booster Gold in its DC Universe workplace comedy

Share All sharing options for: If NBC knows what it's doing, it'll put Booster Gold in its DC Universe workplace comedy

NBC will produce a pilot for a workplace comedy series called Powerless, set in the DC Universe, with the potential to greenlight it as a full series, reports Deadline.

That is, a normal workplace full of (ostensibly, at the least) normal people. From Deadline:

Based on characters from DC Comics, Powerless is a workplace comedy set at one of the worst insurance companies in America — with the twist being that it also takes place in the universe of DC Comics. The show is about the reality of working life for a normal, powerless person in a world of superheroes and villains ...

... The [cast] is not expected to include the biggest DC brands like Batman and Superman. The focus of the series is on the ordinary, "power-less" folk working at the insurance company who often envy the men and women outside their window who make headlines with their supernatural powers.

With three DC shows currently airing, and three more on their way, Warner Bros. evidently feels that the market is saturated enough with dramas that it's safe to start getting a little postmodern, perhaps even satirical. They'd follow Marvel Entertainment in figuring out that a fan cannot live on drama alone, leading to the huge success of Guardians of the Galaxy (and, to a lesser extent, of Ant-Man).

Now listen up, NBC, Warner Bros. and Powerless producer Ben Queen. I respect your decision to go low-powered with this (not least for financial reasons; special effects are expensive), but you know you're going to need to have at least one or two recurring if not lead characters who are actual superheroes in your superhero show. And I have two words for you: 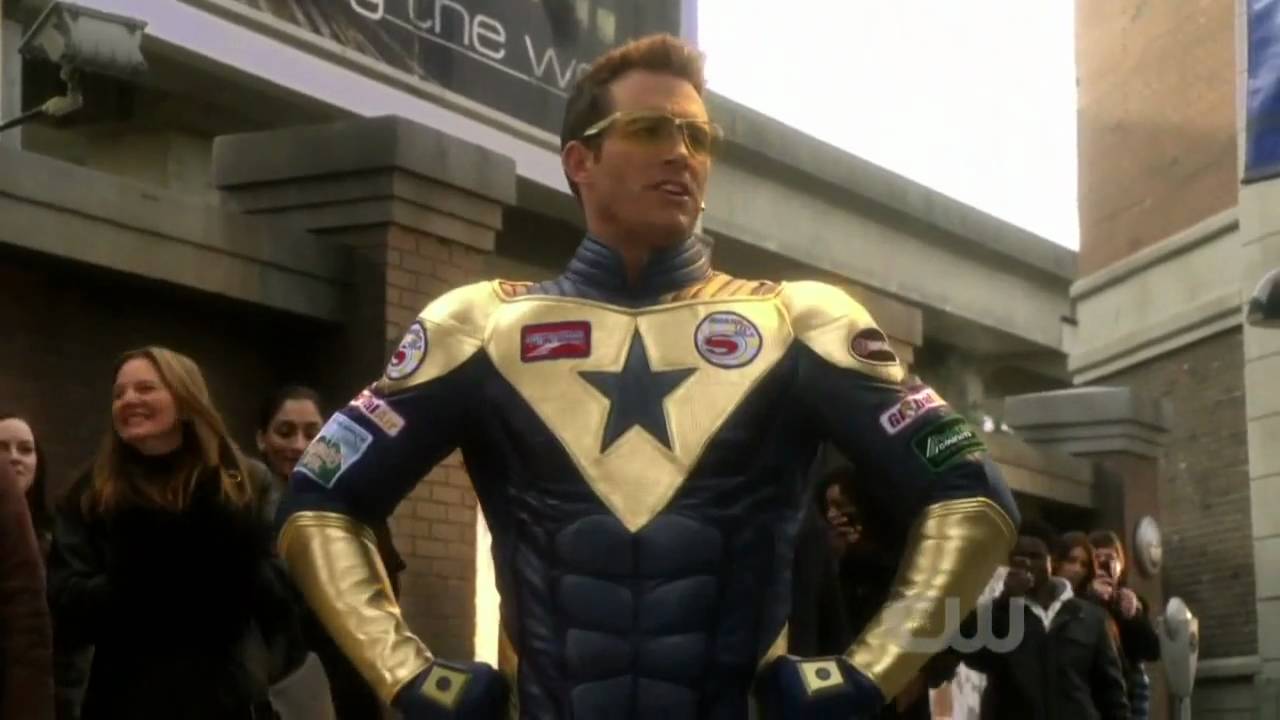 Booster Gold, a washed up high school football star from the 25th century who steals a time machine, a power suit and a docent robot from a superhero history museum and comes back to the 21st century to become rich and famous. How? By using the knowledge of his his robot, Skeets, to predict crime and stop it, and then parlay his mostly-self-created fame to gain corporate sponsorship, generally sell out to the Man and take selfies with the Justice League.

Here is a character who is begging to have a faux reality show made out of his exploits. By which I mean that this is a character who could easily be found filming his own reality show in a comic. He'd also be a great person to habitually ruin the day of some hapless insurance employee. He's a self-centered dillweed who gets so good at faking being a superhero that eventually, he actually becomes a genuinely responsible savior of space and time. The WB is already putting his son and mentor (time travel shenanigans) Rip Hunter the Time Master in Legends of Tomorrow. So do it, NBC.

Do it for Skeets. Do it for all of us. And remember: