I've heard it said that the Mad Max films are less about Max as a conquering hero and more about a passive protagonist, someone who has no real control over his own fate, someone who events happen to. In that respect, at least, the videogame version of Mad Max captures the tone of the films perfectly.

Mad Max is competent at everything that it does. It has all the elements you'd expect from a game based on the franchise — violent combat, intense vehicular chases and battles and a grim world where everything that can go wrong will. It checks all the boxes for a modern open-world game too, from a sprawling 30-hour campaign to a giant map littered with hundreds of sidequests and bonus objectives.

Yet there's a feeling that pervaded my time with Mad Max, a sense of everything in the game being ... okay. The films that developer Avalanche Studios are ostensibly drawing from are driven by ambition. They build visions of a world shaped by off-the-wall absurdity and chaos. This Mad Max, by comparison, feels safe and, frankly, boring.

Mad Max relies on a vague sense of licensed familiarity

A stand-alone story with no strong connection to any of the four films, Mad Max opens with the titular lead character jamming a chainsaw into the skull of local gang leader Scabrous Scrotus. No sooner has he accomplished this feat than his car is stolen, leaving him alone to try to survive in the harsh wasteland of a post-apocalyptic world where every major body of water has dried up.

Before long, Max meets Chumbucket, a mechanic who introduces the game's primary goal: to build a legendary car called the Magnum Opus. For Chumbucket, cars are a religion, so crafting this beast is its own reward. Max, on the other hand, just wants the Magnum Opus so that he can seek out the Plains of Silence, a fabled land that he wants to go to for ... some reason that's not very well-explained. 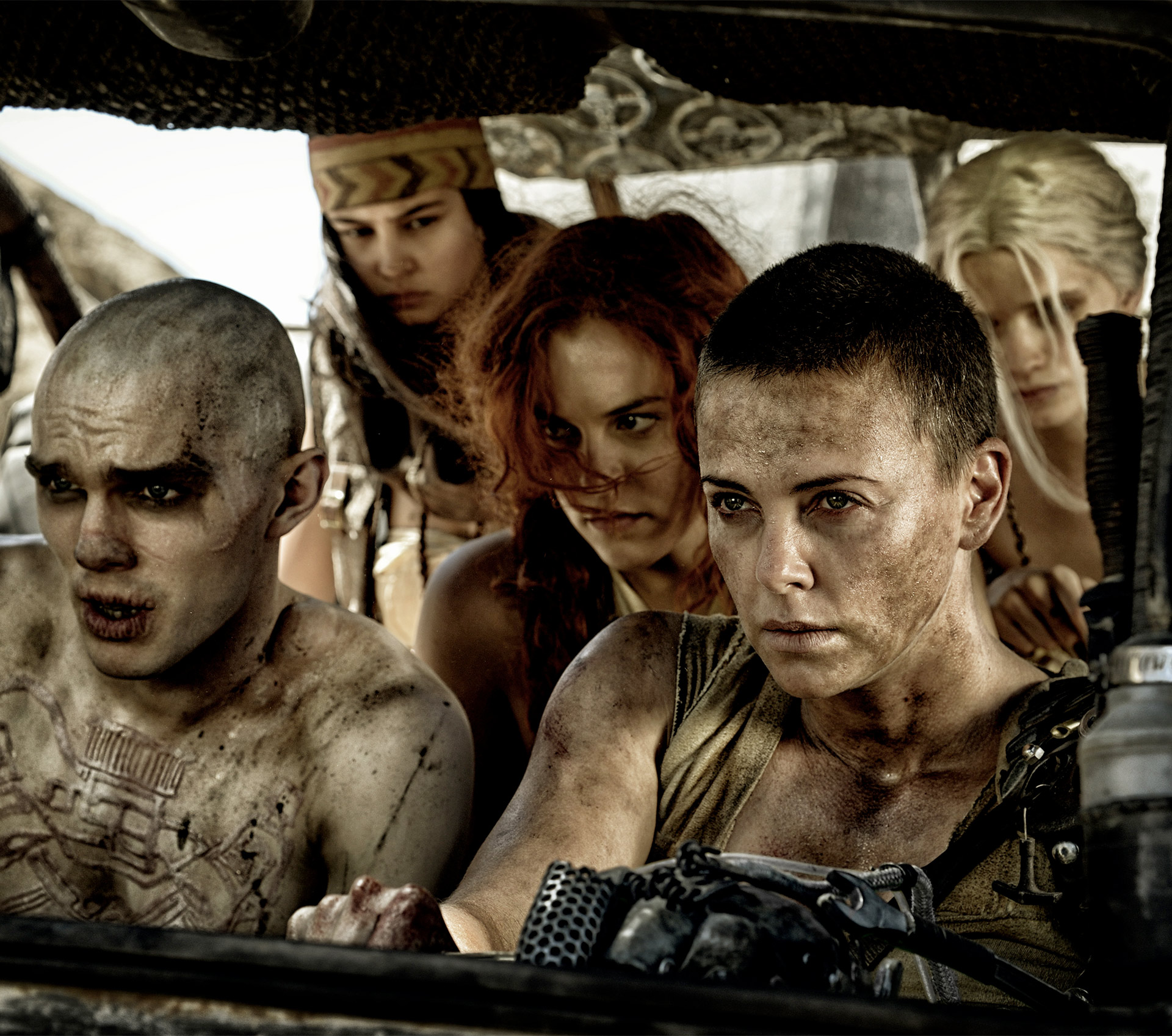 After the progressive characterization of this summer's excellent Mad Max: Fury Road, the game's treatment of its few women is especially disappointing. The closest thing Mad Max has to a female lead, a woman not coincidentally named Hope, is a concubine for the villain and a love interest for Max. Her sole purpose in the plot is to make the bad guys more evil and provide motivation for the hero to fight. She's a damsel in distress stereotype, and it's more disheartening after having seen such a great example of the opposite in theaters just a few months ago.

In true Mad Max fashion, the plot of the game is light at best. Cutscenes exist mostly to provide the vaguest bit of motivation to send Max on one fetch quest or another. The characters are all incredibly shallow, save for Max himself, whose brooding nature borders on hilarious. Chumbucket at least adds some necessary levity to the game, but he also rides along any time you're driving the Magnum Opus, so expect to hear him repeat the same exclamations dozens of times before the end of the game. Mad Max relies on premise and a vague sense of licensed familiarity to do its heavy lifting, but it has difficulty getting the job done.

As cool as driving around Mad Max's world feels, it's also where the game's technical problems become the most obvious. When revving through the desert at ridiculous speeds, graphical details would often pop into existence when I was inches away from the rock or building in question. I also ran into heavy framerate slowdown, both on foot during fights with a lot of enemies, and in the car when going at high speeds and encountering enemy vehicles. In one especially bizarre instance, certain channels of the game's sound disappeared, rendering my shotgun and friendly character dialogue completely silent until I restarted.

It should be noted that we reviewed Mad Max on a debug PlayStation 4, as did several other reviewers who we confirmed these same issues with. It's possible that the problems are tied to early code on a debug console, but this was presented to us as the final game code by Warner Bros. We will be testing Mad Max on retail PlayStation 4 code as soon as we receive it and will update this review if the issues we experienced have been fixed and if it significantly impacts our overall feelings on the game.

It's left to the gameplay to hold interest. Mad Max swaps between on-foot exploration and hand-to-hand fights, and long stretches driving across the sands in the Magnum Opus. The combat is a rhythm-based affair borrowed from publisher Warner Bros.' recent Batman games — Max smashes his fists into enemies with one button, counters attacks with the tap of another and dodges out of the way of attacks that cannot be countered. It's a tried-and-true system, and it works fine at first, although the camera can get stuck at odd angles during close quarters battles.

The biggest problem with Mad Max's combat is that it never really changes. While Max has a few tools at his disposal during fights — notably his shotgun, which can one-hit-kill many enemies — the fights become boring quickly. Avalanche introduces new enemy variants at a regular pace, but very few mix up the combat in any significant way. Mostly the game relies on throwing larger and larger groups of bad guys at Max in order to ratchet up the difficulty, but that just means fights that drag on longer and, if anything, prove less satisfying.

When he's not fighting, Max can also explore areas on foot, discovering collectibles and scrap metal. You'll need a lot of the latter to pay for upgrades as the game progresses, and the former mostly consists of postcards giving glimpses into the world that used to be. These are actually some of the most intriguing bits of writing in the game; I just wish the character and tone of these snippets could have seeped into the rest of the experience.

Even as a fan of those collectible relics, I was not terribly motivated to continue exploring every scavenging location I came across. Maybe it goes without saying in a near-dead, post-apocalyptic world, but Mad Max's wasteland is lifeless. Layouts change, but every oil refinery and gang hideout feels identical. Certain building types, like a run-down gas stop, are repeated over and over. Mad Max has a handful of memorable locales, such as an airport that's been buried beneath the sands, but they're few and far between.

That monotony is compounded by a dearth of unique objectives in these locales. You're always fighting the same groups of enemies, blowing up the same fuel tanks, tearing down the same sniper's nests with your car. The side content in Mad Max is textbook open-world bloat, providing plenty of the same things to do, over and over. It even recycles boss fights — there are two types of bosses, large/powerful and small/fast, and it reuses them multiple times with the exact same mechanics but under different boss names.

You can't even ignore these generic sidequests. At numerous points in the main campaign, the game will lock the next story mission until you've completed a certain amount of busywork. Likewise, many of the best car upgrades are locked behind certain open-world milestones.

You'll want those Magnum Opus upgrades by the end, assuming you make it that far.

Compared to other open-world action games, Mad Max is at its most capable when you're behind the wheel. There are a lot of upgrades for the Magnum Opus, and I felt a genuine sense of growing power as I went along. I hated my first few attempts at taking down a convoy. Later, I was able to expertly weave in, target gas tanks and blow up a whole squad of enemy vehicles in minutes.

How shitty, then, that Mad Max frequently resorts to taking away the car you've been upgrading all along, or forcing you to use specific parts for certain races and missions. Many of the missions using the Magnum Opus can be challenging, but I at least felt like I could push for one more upgrade to help me get through. In missions where I was forced to use a different vehicle or a set loadout, I just had to barrel through the frustration, retrying over and over until I managed to win.

Those inevitable wins felt empty, and that's really the biggest problem with Mad Max. The film franchise has always transcended the summer blockbuster genre, providing worlds and characters and scenarios that have stuck in my mind. Mad Max the game is the opposite; it's got chase scenes and big explosions and bloody fights, but nothing to remember it for. In spite of some annoying technical issues and questionable design, Mad Max is functional, but it's fluff, plain and simple.