Even a teenager isn't immune to the charms of Skylanders: Superchargers' toys.

Going on four years now, Skylanders continues to improve and impress and not just in its eclectic design of wondrous toys, the video game too seems in a race with itself to always outdo its predecessor.

This year, developer Vicarious Visions delivers a vehicle-themed sequel that brings with it a seismic shift in the way you play the game's main campaign and a host of additions meant to extend the life of the title well past completion. Cooperative online and local play, Mario-Kart-esque racing, an improved version of Skylander's in-game card game, daily adventure challenges and more help to soften the blow of the game's high price of entry.

Most importantly though, all of that content, all of the care shown in sculpting toys and crafting code, comes together to deliver an experience that is packed with surprises and never gets dull, be the player a child, a parent, or even a cantankerous teen.

The biggest change that Superchargers brings to the Skylanders franchise is the addition of vehicles. The eponymous Superchargers of the game are character toys that match up with specific cars, planes or boats. While any character, even the characters from previous games, can use any vehicle, when you match a Supercharger with their ride, the pairing gets a bonus. As with Skylanders' many character toys, the vehicles each have their own abilities and are upgradable. Though where characters have a skill tree they invest in to unlock new abilities, vehicles are upgraded by earning new parts and swapping them out to mix-and-match your way to a personal favorite.

After examining one minutely-detailed car, my son Tristan, every bit a surly 14-year-old grump, gave the little toy a nudge and watched it roll a few inches across the carpet in front of our television. 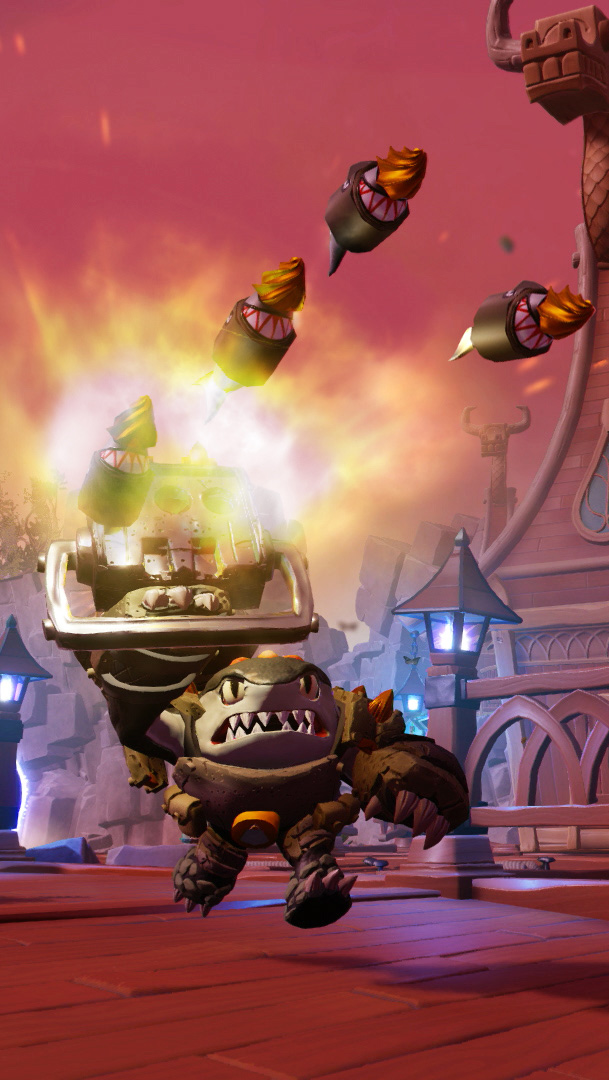 The Crypt Crusher is a coffin on three wheels. A grimacing Day of the Dead skull decorates its hood and two over-sized skeletal hands jutting out of twin exhaust pipes, hold the single over-sized rear wheel in place.

Like all of Skylanders toys, it's meant to be a real world representation of what you get in the game. But Skylanders: Superchargers' toys are the most toy-like to date. That's because they include vehicles with working wheels that can be more actively played with.

Despite Skylanders: Superchargers' heavy reliance on vehicles, the game isn't just one giant racetrack: That's part of the brilliance of Supercharger's design.

Of the 20-something vehicle missions, many play more like adventure titles, with players zipping around a landscape shooting at enemies as they wheel about them, or racing around massive arenas to peck away at lumbering bosses. The game includes traditional kart racing, but it doesn't lean on that. And those included racing tracks are brilliantly designed set pieces that both play into the game's storyline and provide the racers with a multitude of paths and ways to win.

The best part of the vehicle missions is how cooperative play works. Instead of having the two local players hop into two vehicles and then try to deal with the visual cacophony of high-speed, button-mashing, split-screen action gaming, Superchargers drops both players into one vehicle. One of the players focuses on driving while the other handles the weapons. It's an excellent pairing that made the cooperative play something to look forward to, and improved upon the basic elements of those action vehicle missions.

As much as I enjoyed playing through the game's many vehicle missions, it was the on-foot gameplay that dazzled the most.

Each setting in the game's story seemed to up the outlandishness and expectations of what the developers might drop you into next. I won't bulletpoint the specifics of everything the game delivers, because some of the joy of playing through Superchargers was in discovering just how eclectic it is. But I will say the missions seemed designed to fete the history of gaming. We'd be playing through a level that reminded me of LittleBigPlanet or Rampage or Tempest. I can't remember how many times Tristan or I would look at the other grinning and just say something like "Man, this is awesome."

The levels play with gravity, with humor, with painterly backdrops and size. There are even clever tweaks at some of gaming's tropes. Just when you think you've seen it all, you find yourself sitting back down to do something new and spectacular.

The best part is that the game never really ends.

The racing can be played and replayed either from Supercharger's Academy — the hub of the game — or from the start menu. It comes with four maps and supports online and local co-op play. While it likely won't live up to the latest Mario Kart, I found the racing to be well worth revisiting. There's also the ability to play hands of reworked collectible card game Skystones Overdrive either against the AI or in-game with online friends.

Once completed, the Academy becomes a sort of one-stop-shop for this sort of after-game play. Along with those extra games, you can pick up daily new missions in the game's levels, take on challenges and decorate the place with collectibles.

Perhaps because the game has so much content beyond the campaign, the developers have also introduced Portal Master rank. This shows what level the player is and also is used to unlock special, game-wide abilities, like a buff for gold and experience point gains, or one-use, summoning skills.

All that said, the game isn't without its faults — some of which have persisted since the series launched in 2011.

Cooperative play still leashes the two characters together, making it exceedingly annoying at times to explore. The difficulty setting seems to simply increase the damage enemies can take and dish-out. As much as I loved playing through the eclectic mix of missions, they almost all felt far too short. Some seemed to take just minutes to burn through, where even the chunkiest of levels gave you barely enough time to appreciate what you were playing.

The in-game advertising for unlockables seems much less egregious 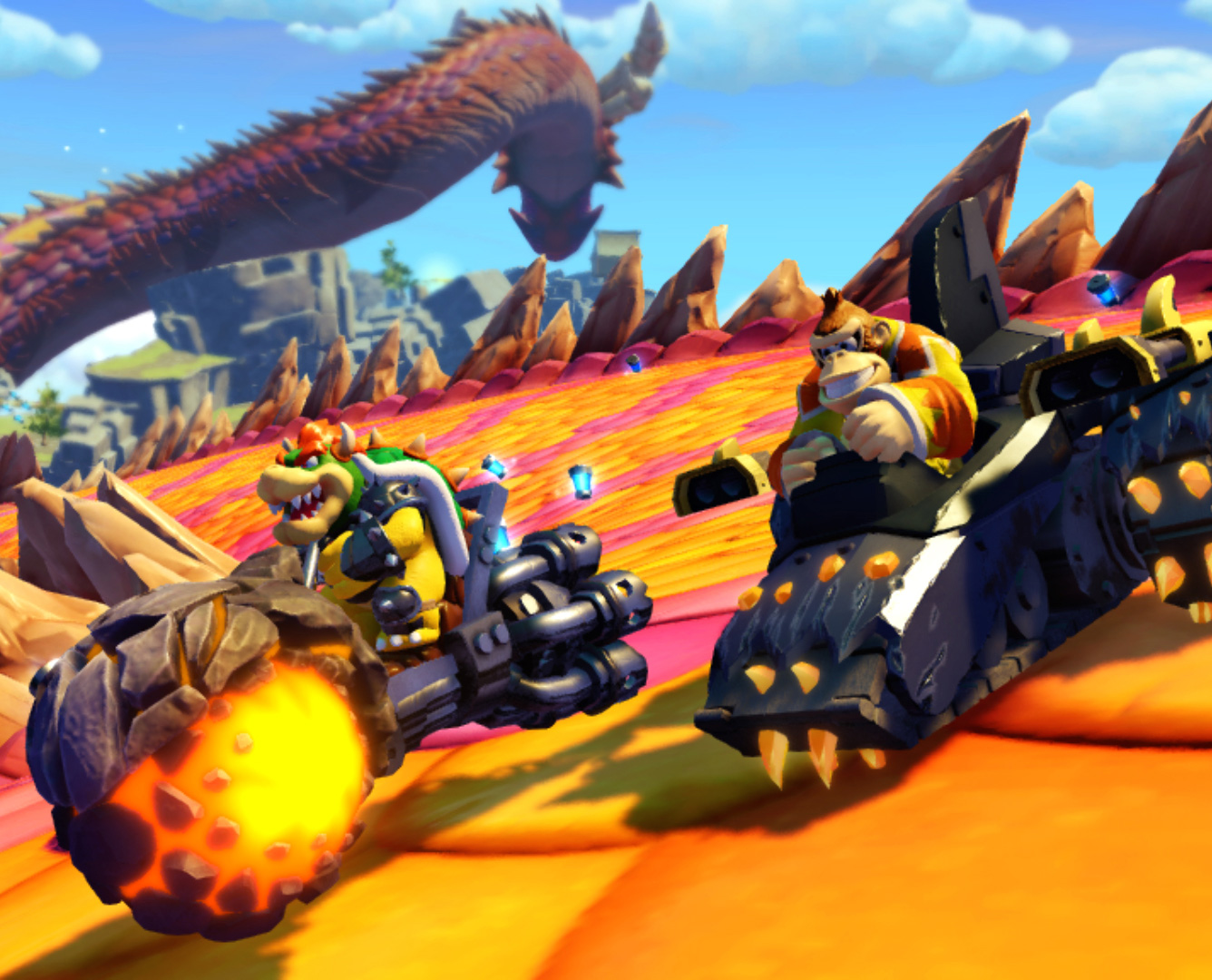 The Nintendo version of Superchargers comes with a fun surprise: A chance to play through the game as Donkey Kong with his Barrel Blaster car or Hammer Smash Bowser with his Clown Cruiser.

Not only are both toys fantastic little creations, the characters also double as amiibo for use in other Nintendo games.

I tried my hand at both characters and their vehicles for a small portion of the game on Wii U and enjoyed what I played. Both characters are colorful additions to an already colorful game and both have clever attacks and upgrades.

While using either of the Nintendo characters doesn't change the game's plot at all (your supporting cast don't even seem to notice anything's up when they chat with you), the new moves and look are a pretty neat addition.

The Wii U version doesn't look quite as nice as the PlayStation 4 and Xbox One versions, but you do gain the ability to play the game on your Gamepad, without the need for a television, if you'd like.

The bad news for those colorful charactgers is that they only come in starter packs. You get Donkey Kong, his car and Super Shot Stealth Elf in the Wii U version and the Wii and 3DS versions swap out the Nintendo folk with Bowser and his ride.

And these particular Nintendo Skylanders won't work on the PlayStation 4 nor the Xbox One ... I tried.

And of course, the game still does include optional, locked away content that can only be played with additional purchases. The side stories in the game, most of which have to be unlocked with new purchases of vehicles or characters not included in the starter pack, aren't very simple to find. Instead of giving you a place to pop in and select those missed missions, players will have to either remember which mission they were located in or play through the whole game again.

While the in-game advertising for these unlockables seems much less egregious than in previous games, it's still there and those locks do make certain elements of the game feel a bit anemic.

The game is a vehicle-centric title, not a car-centric one. But the starter pack only comes with that one type of vehicle. If you want to see what it's like to fly in the game or race on top of or underneath the waves of Skylands, you're going to need to buy the toys to do it. And as fun as those driving levels and courses are, the optional sea and air missions are incredible, and the twist those vehicles bring to racing help set it apart from other kart racers.

After beating the game, there are also ten elementally-aligned vehicle missions that can be played if you have the character with the right element.

Superchargers can feel a little hurried, but it's the best Skylanders yet

Skylanders: Superchargers is a smorgasbord of gameplay and aesthetics, a much-improved romp through the toy-fueled world of Skylands. But at times it feels too hurried to allow you to enjoy the diversity of play and aesthetic it has on offer, leaving the game bordering on staccato, almost to a fault.

That such an enjoyable ending and potentially robust offering of post-game play is marred by a bulk of the game's push for paid add-ons is disappointing. That said, Superchargers remains the best of the franchise to date, delivering players into a rich tapestry of genres peopled with colorful characters, an amusing storyline and a genuinely fun experience to share with friends and family.

Skylanders: Superchargers was reviewed using Xbox One, PS4 and Wii U retail copies and figures provided by Activision. You can find additional information about Polygon's ethics policy here.