How Destiny fixed the one thing that was keeping me away

Share All sharing options for: How Destiny fixed the one thing that was keeping me away

Destiny players have a love-hate relationship with the game, and the community tends to be both extremely vocal and extremely loyal. I've been following the game since it was released, but I quit playing the original version of Destiny once I hit level 20 or so. I wasn't alone in this behavior.

I'm like many of you in that I only have an hour, maybe two, of non-working game time every night. So I tend to play games that allow me to make some forward progress in that time. Diablo 3 was a perfect game for that rhythm, as you could play a little here and there and always gain a bit of level or some loot.

Destiny actively pushed players like me away with its endgame leveling scheme, which depended on an arcane "Light" system. You were completely reliant on random item drops to level up and, while there were certain things you could do to maximize your time, if you didn't pull any good items in your evening of playing, you were sunk. The time was all but meaningless.

It felt like a grind that ended with a slot machine that would determine whether or not you wasted your time. It sucked, and it sucked hard.

That shit is over, thank god.

How Destiny fixed itself

Bungie has demoted Light to a stat that's still useful, but doesn't determine your level. "Light is an average of the attack and defense values across your weapons and armor," our post yesterday stated. "That value determines the difficulty of a particular activity, and thus, your survivability: If you're at 180 Light, you won't do much damage to enemies in a 240 Light activity, and they'll kill you very quickly."

So Light is still helpful, but you don't have to obsess over your item drops. Instead, experience points are actually a real thing again. You can run bounties, complete quests or even just play Crucible matches to level up.

Instead of my 90 minutes of evening gaming being all but meaningless if I don't get the right items, I can now make actual forward progress in that time, no matter how I want to play. There are some hardcore players who will likely miss the idiosyncratic nature of the original Destiny, but the fact that now you know what you need to do to level up and can achieve it is huge.

The UI supports this no-bullshit approach

Destiny, for me, is about using cool guns to kill interesting-looking enemies. I want to gain levels, earn more loot, meet interesting aliens and kill them. Everything else feels like work, and Destiny 2.0 makes it much easier to get more of the fun stuff down while keeping track of what you're trying to achieve.

You can not only carry more bounties, but you can assign up to four quests and bounties to a tracking screen that comes up in navigation mode. It may sound simple, but the impact on play is huge. This is how it looks in action: 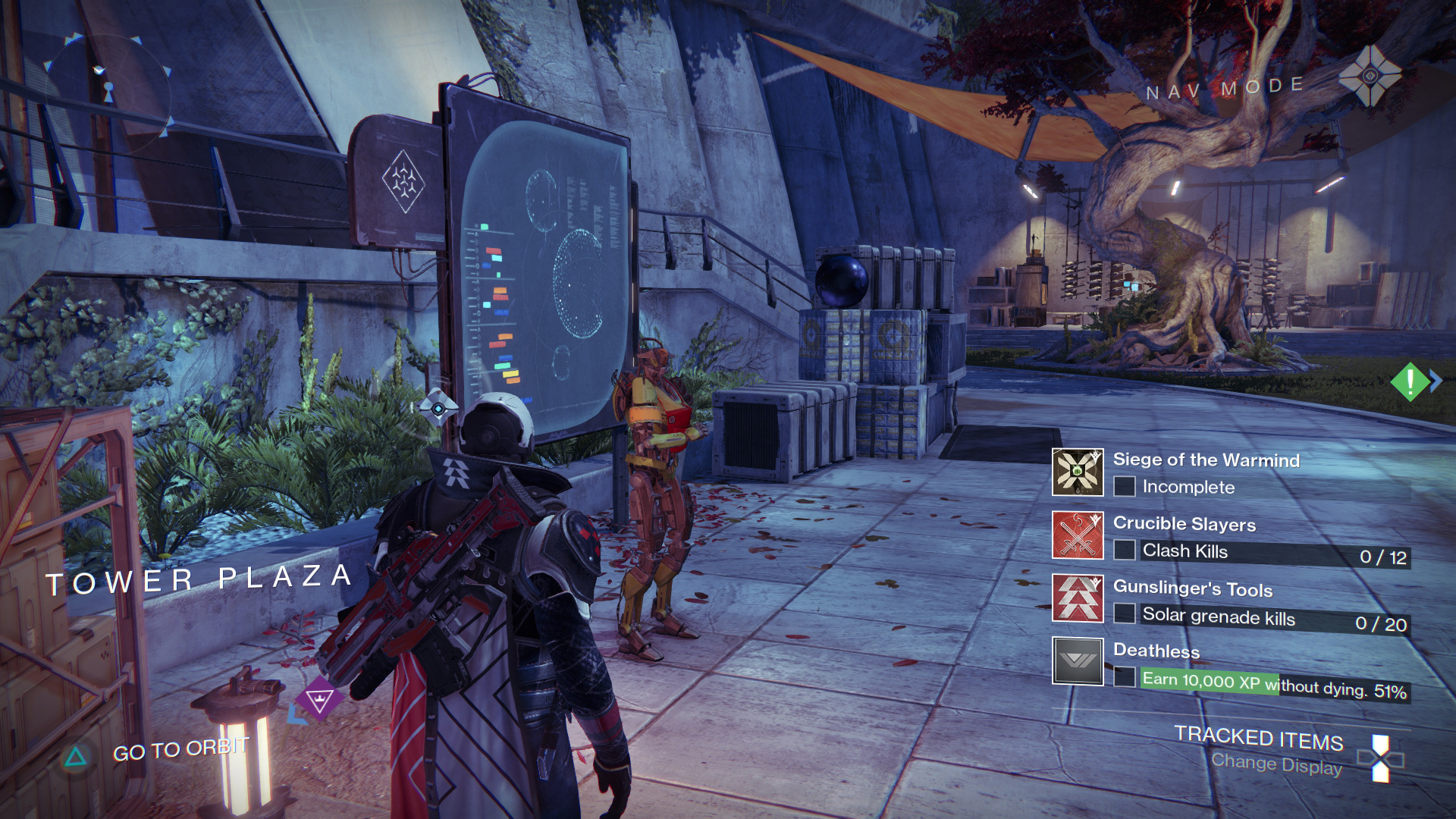 It's now much easier to look at your tracking screen and see how far along you are on each bounty or quest. There's very little confusion about what you should be doing, or how close you are to finishing up. The quest system and the way it tracks progression has improved dramatically; with the new UI, I can sit down with my cup of tea and an hour, take a look at what's in front of my character, and pick one or two things I can achieve in the time I have set aside to play.

The actual content of vanilla Destiny has changed very little, outside of some voice acting, but the way everything is organized and communicated to the player is much clearer and easier to understand. You know when you're tackling something big or involved, versus a quick mission. You're given a pretty good idea of what you'll earn for each action, and forward progress isn't gated by random drops.

That means that your hour of game time can now be put to use doing exactly what you'd like to do while avoiding the things you don't care about. The ability to turn in bounties remotely is a huge time saver, as is the ability to hold more at once while tracking your progress in real time.

Destiny has me back, and that's kind of a scary idea. Bungie made a better, more welcoming game by making progress understandable and transparent. I couldn't be happier.