D&D's Ravenloft returns with the help of its original creators

Share All sharing options for: D&D's Ravenloft returns with the help of its original creators

The classic Ravenloft adventure, originally published by TSR in 1983, is being recreated by Wizards of the Coast for modern Dungeons & Dragons players. Today WoTC announced that the story of the vampire Strahd von Zarovich has been updated for D&D's 5th edition. Instead of reinventing the wheel, principle designer Chris Perkins brought in the module's original writers — the husband and wife team of Tracy and Laura Hickman — to create the very best version of the famous module yet.

"Prior to the release of this adventure," Perkins told Polygon, "D&D adventures kind of followed a format where they were basically location-driven dungeons that you went into in search of treasure. ... Ravenloft changed that. It expanded your mind in terms of what a D&D adventure could be [when] driven by the machinations of a truly, truly horrible villain.

"We wanted to talk to its creators — Tracy and Laura Hickman — bring them in creatively and have them help us retell this story. The original adventure was only 32 pages long — which wasn’t a lot of room to go beyond the castle itself — so what are some things that you wish you could have put into the adventure?"

As it turns out, Tracy and Laura have been hosting nearly annual sessions of the original Ravenloft at their home, for friends and family, over the course of decades. When Perkins asked for their input, they flew out to meet with the team. The result was a torrent of ideas for new locations, characters and encounters.

"We wanted to talk to its creators and bring them in creatively to help us retell this story."

"We actually wrote Ravenloft in the '70s as a Halloween adventure for our friends," Tracy Hickman told Polygon. "Then, subsequently, we actually played it every year for about five or six years. And that’s how the original adventure developed."

"In the years that followed, Tracy kept running the games," Perkins said, "But he would always sort of mix things up a bit. And so I asked him what are some of the things that he added, and what were some of the ideas that he’d had since 1983 when he wrote the original that he thought would make good editions to the story. And out of those conversations came piles and piles of ideas for the new campaign book. Not only specific locations that Tracey had dreamt up, but just more information about the vampire himself.

"It was my wife who first introduced me to D&D," Tracy said. "She bought me what we call now the blue basic set back in ’78. And I immediately regretted it because I was suddenly off into new worlds and making up new adventures almost immediately."

"I became a dungeon widow right away," Laura Hickman said with a laugh.

So how did Tracy and Laura come to create what many consider the first story-based D&D campaign? It's all thanks to one awkward roll of the dice in 1978.

"Early on I was in one of my very first games with a friend of ours and he was running the dungeon and we turned a corner and there was a vampire. And it made absolutely no sense to me that there should be a vampire here. It was like he was like Random Encounter Number 42. I thought, well what an ignominious thing for a vampire to just show up in a dungeon like this. 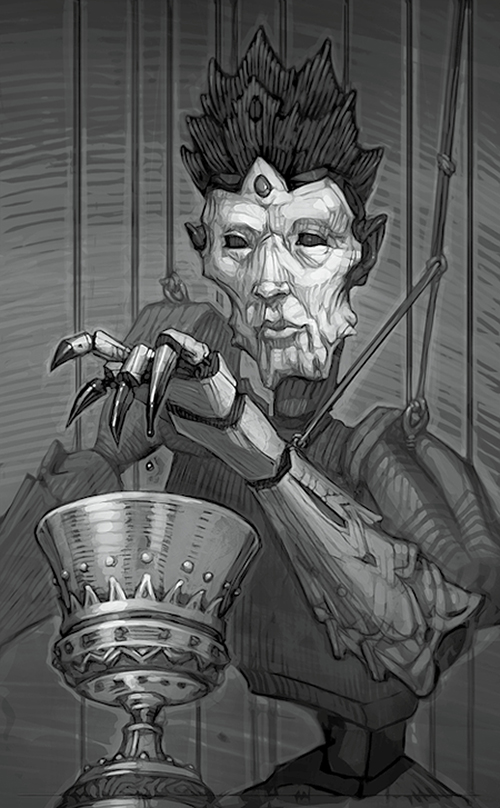 A tarot card inspired deck of "tarokka cards" will be available from Gale Force 9 to add variety to campaigns.

"'Why am I not starring in this particular adventure?'" Tracy said, doing his best Dracula impression. "So, it occurred to me that there was much more to the vampire than just being a random encounter. And that got Laura and I to talking about it."

"Tracy read me Bram Stoker’s Dracula aloud," Laura recalls. "It was a terrifying experience. It was really good though, and it got us thinking about vampires."

Ravenloft went on to become one of TSR's best-selling adventure modules. It's been the subject of several revivals already, for multiple editions of D&D. It was also the source material for a popular board game.

"If you were to ask 10,000 D&D players," Perkins said, "to give you their top 10 lists of adventures, I can pretty much guarantee it would be on the top three for everybody’s list. Which is high praise for that adventure. It’s sort of a seminal experience for a lot of us old timers. If you didn’t play that adventure you’re not a true D&D fan."

This new version of the story will be more than 250 pages long, and include everything Dungeon Masters will need to get their players situated in the kingdom of Barovia. The centerpiece will be Strahd's castle, Ravenloft, but Perkins says the entire play area is roughly the size of half of Rhode Island and contains many new locations and characters.

Every time the campaign is run, things will play out differently thanks to the use of "tarokka cards," being published by Gale Force Nine. DMs will actually deal from the tarot-like deck live at the table, reading a kind of fortune for players during the game. But on the other side of the DMs screen the tarokka deck will be giving them specific instructions on how to lay out Barovia's secrets.

With luck that wrinkle will help give this new version of the classic campaign all the same nuance that Tracy and Laura's annual homebrew games have benefitted from over the years.

"I think my favorite story in all of that was playing the game with one friend of ours who came to really understand the tragic story of Strahd," Tracy said. "So much so that he he was prepared for the final encounter with the vampire, but he had such sympathy for his story that when at last he found him in the dungeon — in the crypt in this particular game — draped over the tomb of his lover he just couldn’t bring himself to do it. He felt so badly for the monster.

"The rest of the party, however, had no such compunction and fell on him like a pack of wolves."

Curse of Strahd and the tarokka deck will be available at your friendly local game store, and online, by March 19.