If The Witness is about anything — aside from, well, doing lots of puzzles — it's about spirituality and science, their parallels, their differences. It's fitting, then, that I've never been more aware of a game's creator than I was while solving my way through Jonathan Blow's island getaway.

During the big breakthroughs — the "how could I not have seen that?" moments, the times when light seemed to emanate from my monitor to bathe the face of Justin, the perfect puzzle-solving genius — Blow was a beloved companion. He was a proud papa who knew I would find the answer if I only persevered.

During the minutes (OK, sometimes hours) leading up to those breakthroughs, he was a cruel, cackling gremlin keeping me prisoner on an island of impossible puzzles. He was a vengeful tormenting spirit that I, if granted the opportunity, would have delighted in shoving into a well.

Speaking broadly, I would consider both of these reactions a "success" artistically. I had an emotional reaction to a line puzzle — no small feat. I don't mind being tormented by a developer if it serves a purpose. The problem with The Witness, and where I suspect its spell may be undone for some, is when it feels like Blow had left the room.

The question I've gotten most frequently from co-workers when they find out I'm reviewing The Witness is if I've gotten to "the hook" or "the twist" yet. The assumption is that a simple sequence of hundreds of maze puzzles can't be the next project from the creator of Braid, a game in which narrative was so essential that it was inextricable from the mechanics. Surely it can't be that simple.

Oh, don't mistake me: There's a beautiful, defiantly colorful world to explore, and plenty of little hints of how it came to be. The Witness is loaded with "plotmosphere," a useful if pat bit of neologism that would probably make Blow cringe. But, mechanically speaking: The Witness is maze puzzles. Full stop.

That's also a highly reductionist take. It's like saying that a book is "just words." What makes The Witness interesting is not solely the solving of puzzles; it's the way in which the player must discover what I've come to think of as "the puzzle vocabulary." Every puzzle is a maze, but most mazes have multiple paths, and to find the correct one, you must understand what the symbols scattered throughout the mazes mean.

To use one of the earliest examples: Some mazes are populated by black and white dots. The rule — which you are taught via a sequence of puzzles that unpack this knowledge like a Matryoshka doll — is that whatever line you draw from the entrance to the exit must segment the map off in such a way that black and white dots are never in the same section.

This is a constant. Once a rule like this is established, it is unchanging throughout The Witness. That rule, however, is combined with and even subverted by other rules to create something of a rudimentary language. Learning that language is half the fun of the game. No, more than half.

When I asked co-workers for help with solving a couple of late puzzles (sorry, I was weak), it took just as much time for me to explain the rules of what I was doing as it did for them to solve it. My analogy of a "puzzle vocabulary" was more apt than I initially realized. The information I held in my head about puzzles in The Witness was literally better expressed via signs and symbols and experience than it was via English. It's all done without a single written word of instruction.

That's an astounding achievement in pure game mechanic design and should be applauded. Locking in on a piece of the puzzle vocabulary, especially after plenty of struggle, is more satisfying and impactful than finding the Master Sword in the Lost Woods or most any other game achievement I can recall. But after the revelations, there were still the actual solutions to find — and thus the first hints of tedium started to bog things down.

In the world of The Witness, solving puzzles is its own reward. While finding a solution will very rarely make a small change in the environment that allows the player to proceed, it will far more commonly just activate the next puzzle to be solved, with zero fanfare.

That's not a problem the first time you solve a certain type of puzzle with no instruction and feel like Queen or King Genius of Brilliant Mountain. Those are the revelations. But the sixth, eighth, 12th time you bash your head against a puzzle for 30 minutes, find a solution and only have the low buzz of the next puzzle screen activating to show for it? That's brutal.

The Witness doesn't care if you win and it doesn't care if you're stuck. That's nothing short of a revelation in 2016. I imagine it will also send some players running to GameFAQs looking for solutions. Once they've done that — and I'm not being hyperbolic here — they might as well uninstall the game.

The danger is that in cheating their way to even one solution, players will have robbed themselves of a crucial part of the puzzle vocabulary and, in doing so, made the next puzzle even harder for themselves. That will naturally lead to more cheating. It will snowball.

The Witness has plenty of cool aesthetic choices and an intriguing if opaque central story, but still: Solving puzzles is the whole game, so using a walkthrough will turn it into a meaningless experience.

That being said: I would have 100 percent, absolutely, no question used a walkthrough had one been available to me. I was stuck for five days on a single puzzle. I have no idea how people who have solutions a click away are going to avoid that temptation but, more damningly, The Witness doesn't seem to know, either.

The game makes no concessions to the fact that it's being released in 2016, an era in which a full list of all the solutions will be available within 24 hours of release. It simply trusts the player not to cheat. That trust would be a lot less tempting to violate if The Witness weren't such a mean piece of shit from time to time. 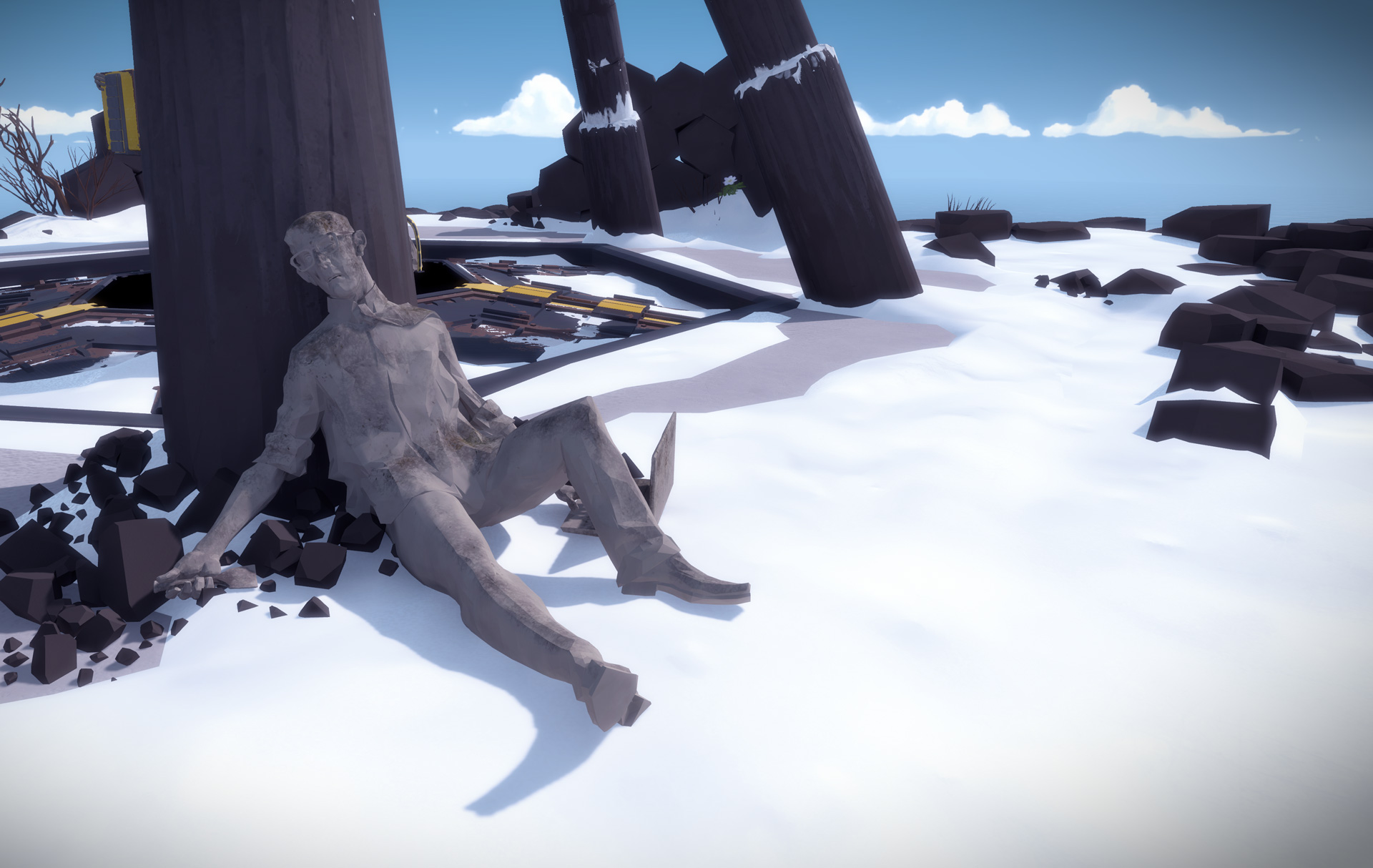 There are plenty of secrets hidden within The Witness; I imagine players may need a few days or weeks before they've all been unearthed. I've been asked not to spoil any of them specifically here (not that I've found many to begin with).

To the puzzle-obsessed for whom finding a solution is all the reward required, finding every secret of The Witness may well provide the 80 to 100 hours of game time Blow has estimated.

Though the secrets that I've unearthed have not deviated much from the game's central thesis, at least one had a really cool payoff, and I look forward to seeing what else is uncovered in the coming weeks. Regardless, I believe that my thoughts on the central game will remain unchanged.

I'm not suggesting a hint system, which would feel out of place. But The Witness throws endless puzzles at the player while almost never recognizing their accomplishments, which creates something of an antagonistic relationship between player and creator. I fear that will send players running to walkthroughs faster than they would have in a more rewarding environment.

There has been a lot of hubbub made lately about the cost and length of The Witness. If I were to estimate, I would guess I spent 15-20 hours making my way to something I would consider an ending. There is more to discover in the world, I'm certain of it, but I was pretty happy with what I was able to uncover in my playthrough.

The Witness is uplifting and frustrating

That said, I doubt I'll be heading back in for a completionist run. It's a beautiful game and knowing that I finished it with minimal help actually does make me feel smarter. It also contains some subtle messages about human potential that I found surprisingly uplifting (when I wasn't pulling my hair out). Despite feeling deeply satisfied by the experience, it's hard for me to ignore how much time I spent frustrated and bored and angry. Maybe contrasting those two ends of the emotional spectrum is essential to the experience of playing The Witness, but in an era in which they can skip the frustration, I'm not convinced most players will have the patience to obtain it.

The Witness was reviewed using a pre-release Steam key provided by Thekla Inc. You can find additional information about Polygon's ethics policy here.