I’ve played more Battlefield 1 than I can talk about until next week. And I’m close to being able to review it, even if I’m not quite there yet.

This is the nature of the modern video game press cycle and the onslaught of fall game releases. Last week, I traveled to Battlefield developer EA DICE’s Los Angeles office to play more than 16 hours — 10-11 hours on day one, and five to six on day two — of Battlefield 1, spanning every map and mode of multiplayer plus three of the game’s six campaign chapters. In addition to providing access and multiplayer time in advance of the game’s release for review purposes, publisher Electronic Arts is allowing Polygon and other outlets to run advance impressions of the game.

As of today, the only parts I can talk about are the parts of the game that EA Access and Origin Access members will gain, well, access to on Xbox One and Windows PC this week, which accounts for five maps — Fao Fortress, Suez, St. Quentin Scar, Amiens and Sinai Desert — and four modes: Conquest, Domination, Rush and Battlefield 1’s new marquee offering, Operations. I can also talk about the campaign’s first two chapters — the prologue and the first proper mission, "Mud and Blood."

That’s not enough to review the game, exactly, but it is enough to have a pretty good idea of Battlefield 1’s core. As such, this isn’t a review, but it’s a prelude to one. And some of what you read here will likely end up in our review of the game next week on Oct. 17 at 3 a.m. PT.

With that in mind, Battlefield 1 is shaping up to be the best, most complete Battlefield package since 2010.

Millions of people played Battlefield 1’s multiplayer beta this summer, but the campaign has been a bigger question mark. While my concerns haven’t been completely allayed after playing a pretty big chunk of it, I’m optimistic, to say the least.

Despite some fairly common Battlefield issues — namely, brain-dead enemy AI, and allies who, among other things, crashed their vehicles into me — Battlefield 1 feels ... smart. It brilliantly avoids the war shooter conceit of One Man’s Long Campaign. Hell, it avoids the single protagonist/storyline problem altogether, sidestepping the narrative difficulties of trying to stretch a story across six to eight hours. Instead, DICE has created a WWI anthology, telling largely unconnected stories about various men (and women) throughout the theaters of the Great War. 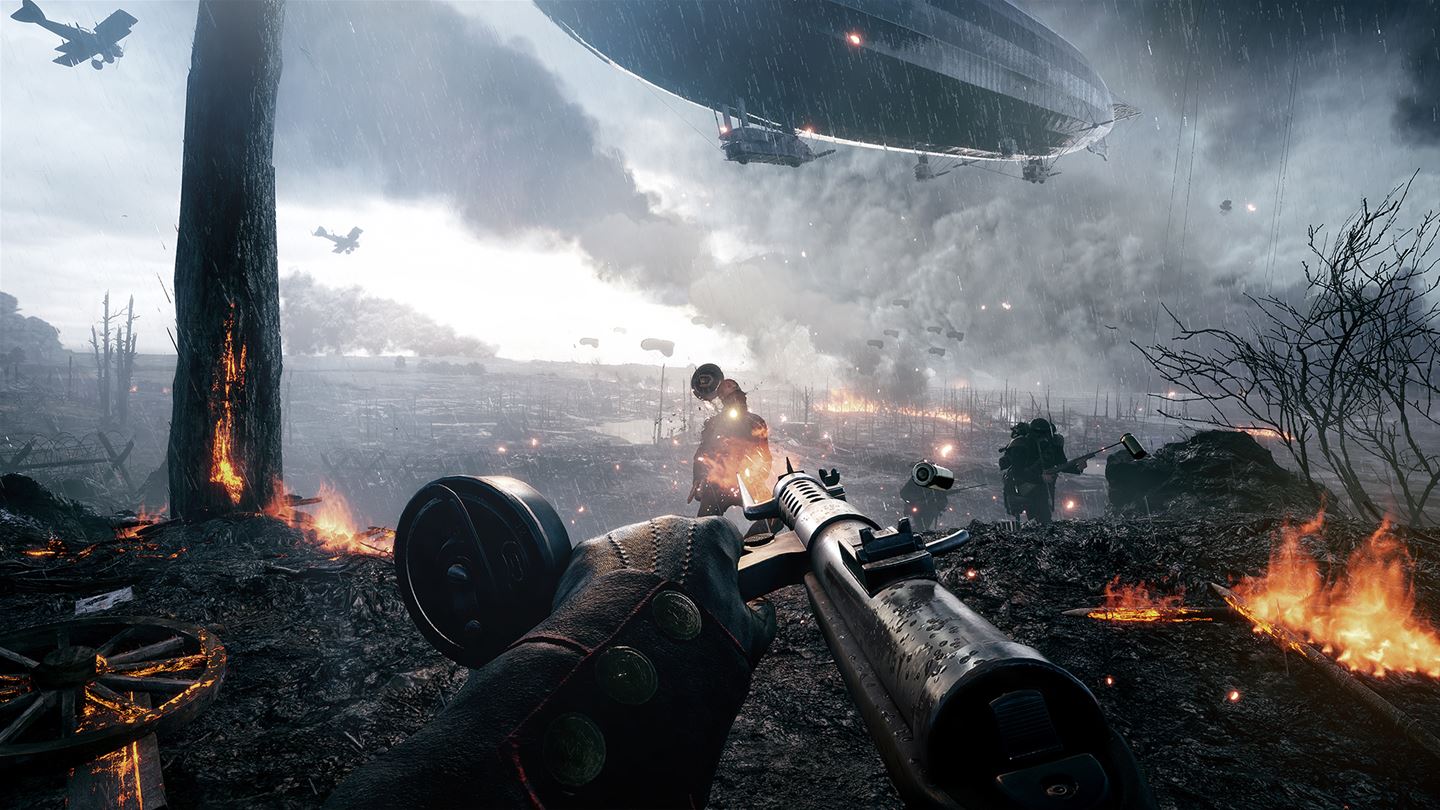 Thus far, Battlefield 1 navigates the tonal challenges of the awful human cost of WWI well, in part by not ignoring them. There’s a consistent acknowledgment of the abject terror and hopelessness that sat atop the people involved in the conflict on all sides, in part thanks to a grimly effective prologue. So far, there has also been less explicit demonization of the "enemy" — something that feels like a real relief in the military shooter space, which seems hell-bent on giving players something they can feel good about shooting at.

This is a point worth making. Battlefield 1 feels like a move away from military shooter doctrine in plenty of ways. But the most interesting way it marks a departure from that kind of game may be in how little shooting there can be in what I’ve played so far, at least compared to the game’s contemporaries. The first real chapter, "Mud and Blood," is often as much an exercise in stealth and avoidance as it is a combat shooter, if not more so — assuming you choose to play it that way. And Battlefield 1 clearly wants you to play it that way, with a presentation that emphasizes how overwhelmingly outnumbered you are as a tank driver guiding his crew through a pea-soup fog in a shell-blasted swamp.

Sneaking in Battlefield 1 doesn’t feel like a bolted-on idea or concept. Instead, it’s a clearly developed set of mechanics that feels lifted directly from 2015’s Battlefield Hardline. So far, it really works. Battlefield 1’s campaign could drop the ball later on — though I’m not really worried it will, based on what I’ve played so far — so we’ll have to wait just a bit longer to see if it can deliver on the promises it seems to be making.

There are fewer questions remaining with Battlefield 1’s multiplayer.

Battlefield 1 feels like a drawing back from the direct competition with Call of Duty that DICE and EA have seemed unhealthily fixated on since Battlefield 3 in 2011, and that’s to the game’s benefit. Weapon dynamics aren’t as much of a throwback as the setting might suggest, with plenty of automatic options in addition to the semi-automatic and bolt-action weapons that seem appropriate for WWI. Battlefield 1 may or may not be historically accurate, but it feels internally consistent, at least.

Some Battlefield series issues remain. Since Battlefield 3 (and arguably even Battlefield: Bad Company 2), sniper weapons routinely get out of hand in Battlefield, and Battlefield 1 isn’t really any different in that regard. There are entirely too many unobstructed fields of fire in Battlefield 1’s enormous levels, and little apparent penalty to damage or efficacy from absolutely absurd distances. Battlefield is one of the few shooter franchises to implement bullet drop, but that factor hasn’t discouraged plenty of players from compensating without issue. And Battlefield’s uniquely effective pistols mean snipers are only at a disadvantage from medium range.

Those snipers can take over larger maps when vehicles aren’t available, which calls to mind Battlefield 1’s size conundrum. As in Battlefield 4, Battlefield 1’s larger Conquest maps are huge, which makes for a nice, big playground ... until, that is, you need to run your ass across it to get to where things are happening. This is mitigated by vehicles, but they’re often in short supply, something I lamented as I spent what felt like ages — in reality, probably 30-40 seconds — running to combat from a spawn point that wasn’t a squadmate.

Battlefield 1 also makes yet more changes to the class system, primarily in the balance of power between infantry and vehicles. Now, medics get the medium-range weapons engineers used to have and, in addition to reviving downed teammates and healing injured players, they’re also responsible for vehicle repair. However, they have no offensive solutions for enemy vehicles; those have instead moved to the assault class. The assault class, meanwhile, doesn’t get ammo refills — that’s gone to the support class, which, I guess has replaced engineers, sort of — but it has the anti-vehicle weapons.

I’m not sure why DICE felt the need to rearrange its classes, but in practice, it’s mostly fine. Ground-based vehicles can present a real problem to deal with in a way that they haven’t in previous Battlefield games, but they can be dealt with.

More importantly, Battlefield 1 is the most fun I’ve had with a Battlefield game since Bad Company 2, my personal favorite in the franchise. The move away from "modern" combat has freed Battlefield 1 to feel different from previous games, to create a new ecosystem of weapon interactions and the balance of power. It’s all working extremely well, and what’s more, the level of destruction has been ramped back up to where it was years ago.

Battlefield 1 shines in Conquest as usual, but Operations may prove to have legs. The mode takes actual campaigns from WWI and strings them across multiple maps. One team plays the part of defender, whereas the attacker is given multiple chances to take a series of objectives, being reinforced when one attempt fails. The historical context given to each of these missions is particularly interesting, adding a narrative hook to matches that Battlefield has only alluded to with Rush mode previously.

Functionally, Operations feels like a cross between Conquest and Rush. Attackers must secure objectives to move the battle forward, and when they do, the defending team must fall back. In Operations, however, the objectives follow Conquest rules, leading to a much more aggressive back-and-forth between teams. It fixes many of my issues with Rush mode, which has increasingly felt at odds with the larger maps and player counts of Battlefield games after the mode was introduced in Bad Company 2, and it may even supplant Conquest as Battlefield 1’s flagship mode.

As with everything multiplayer-related, only time will tell, of course. However, EA and DICE are making one particularly obvious misstep, in my opinion — continuing their aggressive, user base-fragmenting DLC plan. The studio has a lengthy schedule of new paid maps for the game, which will inevitably split players into camps of haves and have-nots.

Regardless, for now, Battlefield 1 impressed me, based on what I’ve been able to play, and, somehow, grabbed me hard with a campaign that has some genuinely great ideas. But you’ll have to check back next week to know whether the game can cash the checks it’s writing.

Battlefield 1 will be available Oct. 21 on PlayStation 4, Windows PC and Xbox One, and on Oct. 18 for purchasers of the Early Enlister Deluxe Edition.