Share All sharing options for: Pokémon Sun and Moon review

After 20 years, it was time for Pokémon to shake things up.

That's not to say there's anything wrong with the previous six sets of handheld RPGs. But Pokémon Sun and Moon, the pair that move the series into its seventh generation, serve as not just a refinement, but a reinvention of what the series has gotten right and wrong over the past two decades.

Older games have previously altered the series in big ways, adding online multiplayer and convenient shortcuts over the years. Sun and Moon go even further, introducing much-needed adjustments to item management, traveling and battling. The games also buck core elements of the Pokémon formula, like gyms and badges, to create a unique experience. These are risky moves to make for a franchise with so much nostalgia behind it, but they all lead to what is the most memorable Pokémon journey in years.

That's evident from the very beginning, which establishes these games as more serious about their story than their predecessors. The classic narrative of collecting 'em all on the way to becoming regional Pokémon League champion is tweaked: The 11-year-old protagonist, who's just moved in from the original games' land of Kanto, must first complete several trials of skill to prove their worth to the region's strongest trainers. To do so, they must travel across their new home's four isles and become better acquainted with Alola, its people, its Pokémon and its priorities.

I was surprised by how taken I was with the story. Pokémon is rarely a series that prioritizes plot, but Alola is a fascinating new world. Thanks to a small cast, the games encourage you to become close to each character, and relationships with the humans of Alola are meaningful, just like those forged with its Pokémon. I loved building out my own Pokémon team as per usual, but I cared just as much about the fate of my new friends and fellow aspiring Pokémon masters as I followed them closely from town to town, island to island.

Pokémon Sun and Moon's revision of the classic "visit a town, beat its gym, move to the next town" set-up is just as striking as their storyline. The island trials that replace traditional gym battles feel like a more personal experience, with each presiding captain getting to know and care about the player and their particular skills. Although there's still a face off against a leader with a type-based team, the path there is diverse and unpredictable, especially for a Pokémon veteran.

I found these challenges to be a disorienting change of pace at first. How could I gauge my progress when each island has a different number of captains, and each trial has unique conditions? What does taking photos of Pokémon have to do with becoming the very best trainer that ever was? But the trials play a large part in how Sun and Moon reconstructs the Pokémon formula. Their impact on the story is direct, and the diverse gameplay worked in tandem with that story.

This isn't to suggest that Sun and Moon ignore the most important part of any Pokémon game, however. There are plenty of battles to be fought, whether in the wild or the new Battle Royal feature, against friends and seasoned Alolan champs. This is an excellent thing, because I've never loved fighting Pokémon more than I do this generation.

Part of that is because of Sun and Moon’s fantastic presentation: These are beautiful games, some framerate dips during more spectacular battles aside. But the most affecting change made to the series here is a great quality of life improvement. A type effectiveness indicator bakes into the gameplay what I've had to regularly look up on my own since I first played Pokémon Red in 2000. After facing off against a Pokémon once, the game automatically charts whether a move will be effective or not. This is fantastic for newcomers, but it's also a relief for people like me who have had to juggle the specifics of an increasing number of Pokémon types over the year.

The effectiveness indicator is joined by a "call for help" mechanic, where wild Pokémon under duress will cry out for an assist from another Pokémon with varying success. These additions make the sometimes tedious random battles way less so. I used to be someone who avoided tall grass unless I was hunting for a certain Pokémon, because battles could often become a grind. In Sun and Moon, it's much easier to develop a battle strategy on the fly. That means that a one-on-one fight turning into two-on-one at a moment's notice is a welcome challenge, not a point of anxiety.

The Alola region's diverse ecosystem makes random battles even more exciting. It also is a boon for collectors. The importance of crafting a strong Pokémon crew to take to victory in battle isn't lost on Sun and Moon, and that's apparent in the story, too: The main prize of the island trials is no longer badges, but a set of high-powered gems called Z-Crystals. They're a way more useful reward, as any Pokémon can use the Z-Crystal that corresponds to the type of one of its moves. Unlike the more limited selection of overpowered Mega stones in the previous generation games Pokémon X and Y, anyone can use a Z-Crystal and is encouraged to do so. They're flashy and they're fun to use, even if the benefit isn't as great as it's made out to be.

The multiplayer offerings in Sun and Moon are mostly carried over from X and Y and Omega Ruby and Alpha Sapphire. Wonder Trade and the Global Trade System return for some easy Pokémon swapping, and there's also various battle options. The new Festival Plaza feature that houses all of the online options feels a little congested — it's both a hub for battles and trades and a place to get in some single-player competitive training. Expect international strangers to stop by at random, although there's not a ton to do with them beyond hoping they accept a multiplayer request.

As for squaring off against friends, Sun and Moon are not exempt from Nintendo's archaic online friends list system. It's probably less stressful and tedious to set up a multiplayer session in person than one that's silently beholden to an internet connection, where my fellow player and I were hit with weird errors and lag.

New features include the Battle Royal mode, which is basically just a multiplayer free-for-all, and global missions, which are a fairly dull set of timed activities where you can earn points while doing laps around the Festival Plaza. Pokémon veterans already know what their needs are when it comes to online, but those stopping in for the first time won't find these options that exciting.

Flashy and fun is Pokémon Sun and Moon's modus operandi, and I found it to be an impressive, successful combo. But much of the spectacle is derived from the very linear storyline, which doesn't bode well for the games' longevity after the plot comes to a close. Sun and Moon trades expanded content for a straight, if well-told, adventure, marking yet another deviation from the Pokémon series formula. I found myself even more disappointed by this exchange than I otherwise would be, largely due to fond memories of robust side quests in previous generation games.

The sparseness of the Alola region reflects this change in priorities. Beautiful as the setting may be, there's not a whole lot to do on these islands beyond completing the trials and finding Pokémon. There are ways to keep busy outside of besting the island captains and collecting all 800-plus Pokémon, but they're few and farther between. There's even a marker on the map that tells you exactly where to go in Alola at all times, a new element that points to just how straightforward Sun and Moon are compared to previous entries. Where older games encouraged exploration, the games just wanted me to keep moving forward and not look back.

In my travels, I found little to unearth in Alola outside of where the story was pointing me toward, and that's a disappointing change. There are few side quests to get lost in, both during or outside of the storyline. Dedicated completionists and battle pros will discover a lot to love from the new fights that open up after the story's done, but I'm left wanting more ways to just hang out with my Pokémon, both during and after the main game.

Pokémon Sun and Moon makes big changes, for the better

Pokémon's 20th anniversary year has been all about celebrating what's great about the series, but the newest pair of games prove that the series is ready and able to make big changes without sacrificing that original spirit. Without the heaps of content of series-defining entries like Red, Silver and X, Sun and Moon don't quite stand as endlessly replayable classics, but they're a wonderful testament to why Pokémon is still so special all these years later.

Pokémon Sun and Moon were reviewed using a pre-release retail copy of the game provided by Nintendo. You can find additional information about Polygon's ethics policy here.

Our review of Pokémon Sun/Pokémon Moon 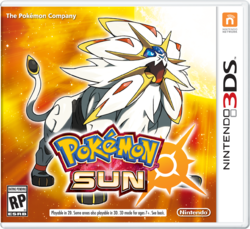