Final Fantasy 15 is bombastic, strange, surprising and, often, brilliant. It is voluminous; it is cacophonous.

It's the only type of result that would feel fitting for a game with such a lengthy and tumultuous history.

Originally announced a whopping 10 years ago under the name Final Fantasy Versus 13, FF15 was intended to be a spinoff featuring the same world and lore as Final Fantasy 13. In the decade since then, the game has seen switch-ups in its scale, its platforms, most of its development team and its very core design philosophy. It's hard to imagine a project coming out of all these changes, all this time passed, unscathed. And sure enough, Final Fantasy 15 wears some warts.

And yet, it's also dazzling. Square Enix has created a spectacle of the sort that Final Fantasy stopped being well over a decade ago — an incredible journey that's ambitious in ways most games never try, even if it's not always successful in that ambition.

Final Fantasy 15 is ambitious in ways most games never try

Final Fantasy 15 places you into its world with little fanfare or prologue. You take on the role of Noctis, the prince of a kingdom called Lucis. At the game's outset, Noctis is sent from his home city to take part in a political marriage that's meant to bring peace between the warring factions of Lucis and the Niflheim Empire. He's accompanied by three of his best friends from childhood — four warriors on a journey of world-changing significance, just like the old days.

Noctis' friends act as the beating heart of Final Fantasy 15. From Prompto's awkwardness and bad jokes to Ignis' calm knowledgeability to Gladio's strength and straightforwardness, the group is a believable band of buddies who care about each other and enjoy the time they spend together. Though their quest has huge stakes, they often treat it as a road trip slash bachelor party, a last chance for the group to be together as guys before Noctis is married.

Final Fantasy 15's strongest moments are found in these more mundane elements, the bits that are about just hanging out. As they drive across the countryside, Noctis and crew share charming, everyday banter that's all about building up their friendship rather than relaying plot beats. Prompto takes dozens of pictures documenting the trip. When they turn in for the night, the group sets up camp, and Ignis cooks. Each in-game day's end is punctuated by the friends gathered around a fire, eating, enjoying each other's company.

These slower elements transformed each of these characters from forgettable anime prettyboys into the virtual equivalent of best friends whom I felt like I'd known all my life. By the end, Noctis' gang are three of the most well-drawn, fully-developed characters in Final Fantasy history, because the game lets you just spend time with them, as much in the boring moments as the epic ones.

These bits of character building tie into mechanics in some clever ways as well. Part of what makes the end-of-day camping sequences possible, for example, is that you don't level up until you rest. That also smartly gives you an opportunity to cook meals, which gives you stat buffs for the day ahead. In a nod to some more recent hit franchises like the Monster Hunter games and The Witcher series, cooking the proper meals is all but necessary preparation for taking on some of the harder enemies in the game. Those stat buffs, in turn, provide a concrete reason for combing the game's massive open-world map for vegetables, fruit and other cooking ingredients. All of these side systems connect and interlock in a way that feels clever and satisfying.

Each of the side systems is supported by a real-time combat system. Final Fantasy 15 finds a medium between the strategic turn-based combat the series was raised on and a faster, action-game style that has become more popular in modern RPGs. Players only control Noctis, but unlike his allies, he can swap between any of the game's half-dozen or so weapon types. The core of combat is simple: You can hold a single button to continue a series of attacks on your target, modifying the angle and style of each swing by holding the left stick in different directions. Another button blocks and dodges, and another allows you to stylishly throw your weapon and warp toward an enemy, or warp out of battle if things get tough.

While combat in Final Fantasy 15 doesn't provide the same level of control as in a full-fledged action title, it's approachable, and it's also flashy as hell. There's depth there, and I felt more comfortable and better able to fend off harder enemies the more time I spent with the system. But it's also set up in such a way that if you're not good at fast-paced games, you shouldn't have any trouble getting through at least the main story. 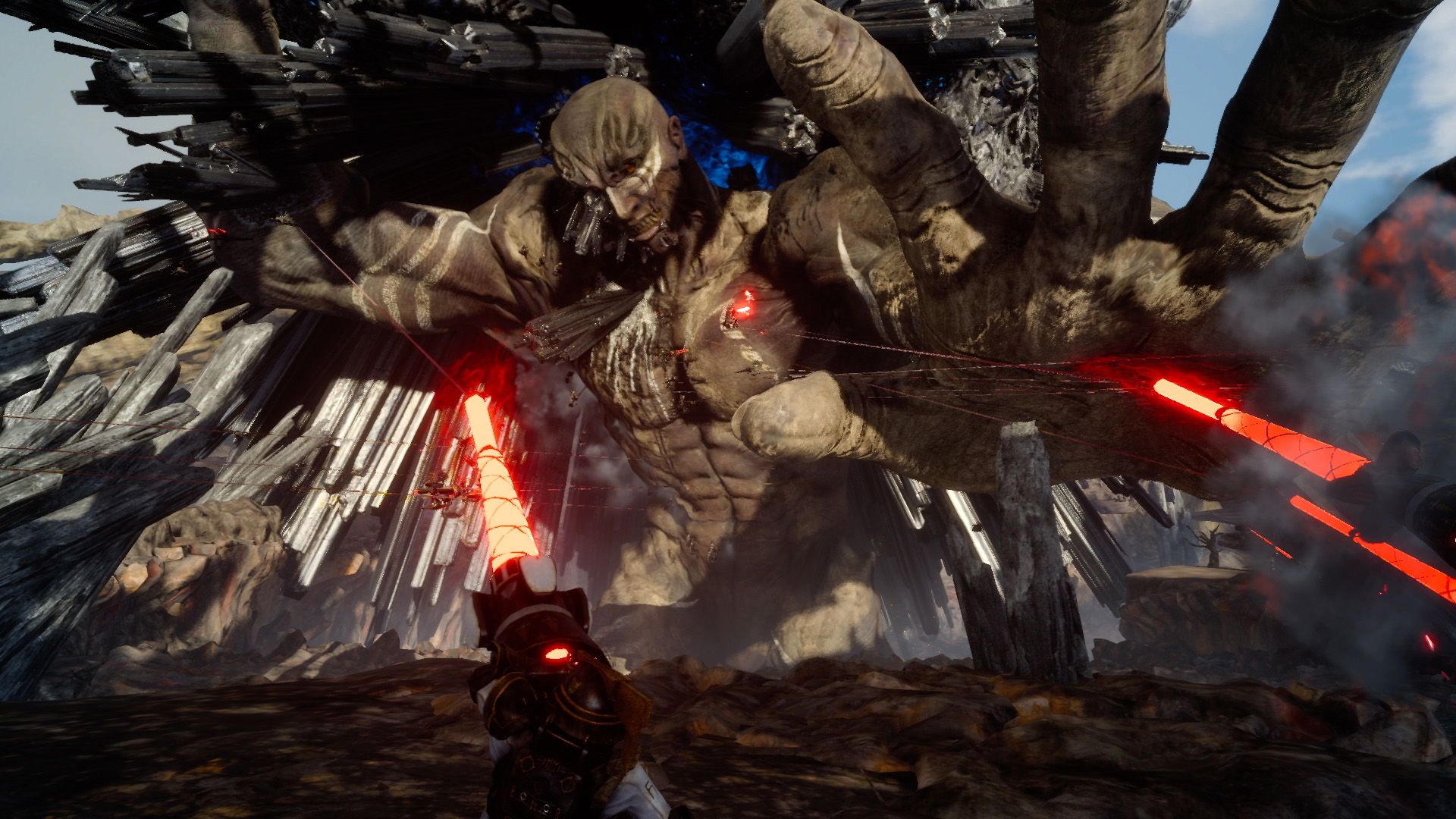 The only problem I ran into with Final Fantasy 15's combat is the game's terrible camera. In wider spaces — like the desert plains where you begin the game — everything works fine, but when you're fighting in enclosed hallways or tree-filled forests, the camera invariably flies around trying to find a good angle. More often than not, it settled behind a box or a tree, making it impossible for me to see what was going on. The main quest was easy enough that I wasn't held back by camera problems, but they became a much bigger issue when I tried to tackle harder side content.

Side content is a major part of Final Fantasy 15. The first half of the game is structured like many other open-world RPGs of the past 10 years: You have a main quest you can pursue, but you're also given dozens upon dozens of side quests that send you to all corners of the map. These tasks vary widely in how interesting they are — many objectives are as simple as "go here and find this item/kill these enemies." But the world of Lucis is so interesting, so detailed and begging to be explored, that I welcomed more excuses to travel to its farthest reaches. I spent tens of hours ignoring the main story for these bonus activities, simply to spend more time getting to know this world's nooks and crannies.

Some of the side quests extend beyond the less interesting goals, too. Lucis has a whole bunch of completely optional dungeons, dangerous places that are fleshed out, full of unique enemies and giant setpieces despite never being featured in the main story. These alone are reason enough to stick with grinding through the side content, as well as compelling arguments for returning to the game after you've completed the main story, whereupon even more challenging postgame content opens up.

That main story, by the way, is the source of Final Fantasy 15's most surprising and least consistent events. As was revealed this summer, Final Fantasy 15 gets considerably more linear about halfway through the game, when the party leaves Lucis. The game's developers spun this as embracing a feeling more like a "conventional Final Fantasy." If anything, the last 12 to 15 hours of FF15 are the least like a traditional Final Fantasy, the most willing to take chances and try weird stuff, for better and worse.

It's hard to discuss the latter half of the game without spoiling anything, but I'll simply say that plot events carry Noctis and friends out of Lucis and on a whistle-stop tour of the wider world of Final Fantasy 15. These new, highly linear locations include strange experiments at shifting genres. Some of these are more successful than others. When Final Fantasy 15 embraces Uncharted-esque setpieces or partakes in an over-the-top anime-style boss battle, it's fun, if slightly unpolished. When it slips into more startling switch-ups, like ill-advised stealth sections or a bizarre trip into jump-scare horror, things get a little more frustrating.

The first half of Final Fantasy 15 sprawls, urging players to take it at their own pace and enjoy themselves. The second half feels out of breath in its pacing, moving past whole nations and plot beats far faster than they can be resolved. Numerous side characters and story elements that are slowly developed in the first half are dropped entirely or given disappointingly weak conclusions as a result. This seems impossible to say for a game that's been in development for 10 years, but it feels there were much bigger plans for the second half, as if the developers had to scale back the size of the open world and the scope of the game's plot, and squeeze everything into half the time intended.

It borders on nonsense, saying that this 60-plus-hour game doesn't have all the time it needs to get things done. But that's what it feels like, at least when it comes to the side characters and pacing.

However — and again, I'm trying to be careful not to spoil anything here — Final Fantasy 15 at least provides a rewarding and emotionally fulfilling finale for Noctis and his friends. The world as a whole and some of the smaller plot beats aren't as well-developed as I'd hoped, but the game has a clear and logical goal for Noctis, and every part of where it leads and where he ends up feels right. For as much trouble as most games have with endings, FF15 nails it.

Final Fantasy 15's own opening text describes it as "a Final Fantasy for fans and newcomers alike." The game contains pieces sure to disappoint players in both camps, but it also provides a refreshingly human take on the classic RPG journey that I hope will inspire future games in the franchise. Final Fantasy 15 can be baffling in some of its questionable choices, but across the board, it hits more than it misses. It hums with an energy and compassion that I loved, a sense of camaraderie, friendship and adventure that fills an old and struggling formula with new relevance.