Have you ever played a Mario game and wished there weren't so many buttons to press? Good news! Super Mario Run is upon us, and it's going to take over the world for a little while. In this guide, we'll teach you all about Nintendo's biggest foray into mobile gaming.

What is Super Mario Run?

Mario's mobile adventure is an auto-running side-scroller that harkens back to his origin on the NES (and the sequels on every Nintendo console and handheld since).

How can I play Super Mario Run? And where do I get it?

Since Super Mario Run is launching as a timed exclusive on iOS, you'll need an iPhone, iPod Touch or an iPad to play, at least for now. Which iDevices are compatible remains a mystery at the moment, though. Super Maro Run's App Store page is silent on the minimum hardware requirements, as is the game's official site. We'll update this guide as soon as we learn more.

What's this I hear about Super Mario Run requiring an internet connection?

"Online connectivity allows us to offer a variety of features and services that enhance the play experience. Super Mario Run is not a static experience, but rather one that players can continue to return to again and again to enjoy something new and unexpected. For example, online connectivity can offer the following:

How much does Super Mario Run cost?

You can play the first three levels as a free demo, but unlocking everything will require a one-time purchase of $9.99.

Super Mario Run will launch with 24 courses over six worlds. That's just the World Tour mode. There's more to do in Toad Rally and Kingdom Builder, and this seems like the perfect time to start talking about those.

Yeah. Good point. What can I do in Super Mario Run (if I have an internet connection lol)?

There are three ways (or modes, to use Miyamoto's word) to play Super Mario Run: World Tour, Toad Rally and Kingdom Builder. Let's talk about each of them.

World Tour is probably where you're going to spend most of your time — this is the core of Super Mario Run.

In most levels of World Tour, your goal is to get from the start of the level at the left to the end of the level on the right, where you'll find the iconic flagpole. You'll jump over obstacles, enemies and gaps and collect coins along the way.

Sorry to interrupt, but I was just wondering if there might be any reason or incentive for me to play the levels more than once?

Cool, thanks. Carry on.

No problem. Just one more thing: Completing these levels also earns you Rally Tickets that you can cash in to play the Toad Rally mode.

Toad Rally is where you go to compete against other players in an asynchronous race — you're not racing at the same time, you're racing against a ghost version of your opponent, replaying their fastest time.

The race isn't solely about the fastest time, though. Pulling off cool jumps will earn you a crowd of toad fans, the number of which factors in to your final score. These style points also go toward filling a star meter that will unlock a Coin Rush, filling your path with a ton of coins to collect.

In Kingdom Builder, you create your own little corner of the Mushroom Kingdom. You spend the coins you collect in the World Tour and Toad Rally levels to buy buildings and decorations. Some of these are just for appearances, while others unlock the other playable characters or bonus games.

How do I play Super Mario Run? I have 10 fingers — five on each hand, actually. Is that enough fingers and hands, or will I need more?

As Mario's creator, Shigeru Miyamoto, said in a video introducing the game, Super Mario Run is a Mario game that you can play with only one hand.

It may look like a Mario game, but developing a side-scrolling platformer for touch-based devices like smartphones and tablets means that some things have changed. In fact, let's talk about that right now.

Well, that's different. Hey, so how do I control a Mario game with, like, only one hand?

The controls in Super Mario Run could not be simpler. That doesn't mean you're without options, though. Let's run through the basics.

When Mario jumps onto a wall, you can tap to jump again and reverse direction. You can string wall jumps together to climb. This is also a good way to change direction and backtrack a little if you missed something nearby.

Landing on a slope will trigger Mario to slide down on his butt. Sliding automatically kills enemies, earning you extra coins — and it gives you a bit of a speed boost, helping you reach otherwise unreachable areas.

Hey, I've been playing Mario games for my whole life, so I know what to expect. (I'm kind of a big deal.) Are there any special blocks or power-ups?

First of all, thanks for reading Big Deal. It means a lot to us.

In Super Mario Run, you're not limited to the basic brick blocks and question mark blocks. There are some fun toys that add some twists to your game — everything from the standard Mario power-ups to new mechanics just for this auto-runner.

The dashed-outline blocks with arrows in them spawn a few coins in the direction of the arrow. There are also arrow blocks on the ground that change the direction of your jump if you jump on them.

You collect bubbles throughout the levels — usually from question mark boxes. Using a bubble floats you backward in the level a little bit, letting you redo sections (and saving you from the horror of falling to your slow and agonizing death as you descend into an endless, bottomless hole).

The red blocks with the pause icon do exactly what they say on the tin. When you stand on a pause block, Mario stops automatically running, giving you a second to think and decide how to proceed.

The standard Super Mushroom acts just like you'd expect. You get bigger — Mario's Super form — and can break brick blocks.

The stars in Super Mario Run grant the same invulnerability as always, but also add in a vacuum effect that collects coins from a greater distance.

Look: I like Mario just fine, but what if I want to be Toad? Is there more than one playable character?

Mario is almost never alone on his adventures. and that's no different this time. You start out with Mario, but playing Super Mario Run will allow you to unlock three more friends to do some running in his place.

What friends? Good question! Here's what we know:

When you first start playing Super Mario Run, you've got Mario and Mario to play with. But the character select screen teases the pals to come. You can check that their tantalizing silhouettes below. 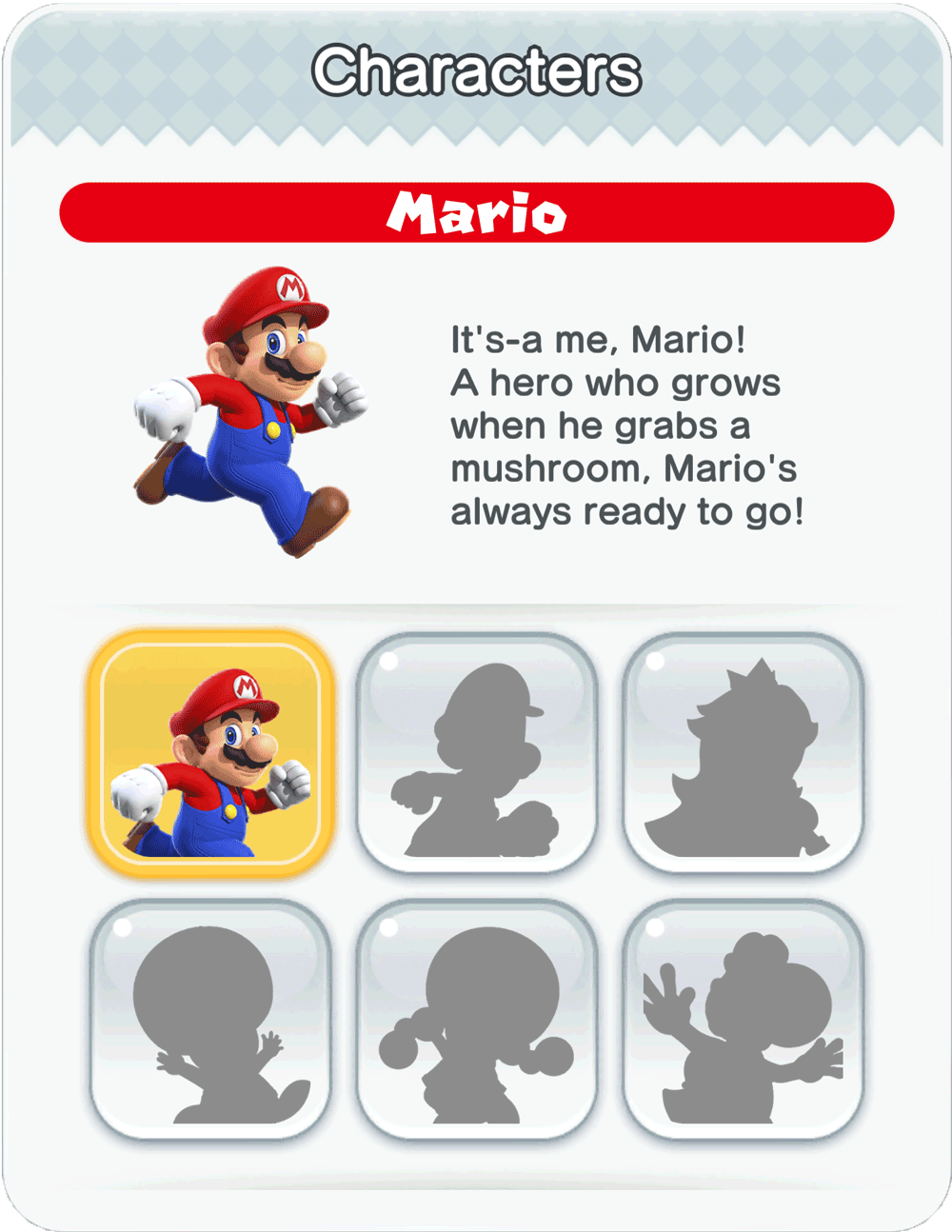 What is Mario's last name?

If you acknowledge the existence of the 1993 Super Mario Bros. movie (and you shouldn't — even the director can't look back fondly), Mario and Luigi's last name is Mario. Really. Mario Mario. Miyamoto, however, says Mario is a mononym like Madonna or Sting (or, if you aren't old enough to have serious concerns about arthritis, Sia or Drake). This question actually started a brief e-fistfight (with lots of name-calling) among the guide staff. Please ask easier frequent questions.

Is Yoshi a boy or a girl?

Look. We'd love to go down this rabbit hole with you, but we don't have the time and our crazywall is still covered in Westworld theories. Yoshi is a member of a species of dinosaur called yoshi (weird!), and he sometimes lays eggs. We don't understand how it works, either. Don't you have any questions about the game?

Coins are just scattered all over the ground and in the air in the Mushroom Kingdom. Shouldn't this raise some pretty serious questions about inflation and Princess Peach's economic policies?

In most Mario games, collecting enough coins will earn you an extra life. Is this a metaphor for the rich attempting to buy immortality?