It's been a long time since the gaming world has had a classic stealth game.

I don't mean "stealth" as a broad concept — obviously we have plenty of recent releases, such as Dishonored 2 and Hitman, in that category. In these games, you often get a choice in how you take out enemies, and sometimes stealth just happens to comes into play. New stealth is all about making the decision of how to approach for yourself. In old-school stealth games, you didn't have a choice between covert and aggressive. It was mandatory to stay in the shadows. Likewise, in Shadow Tactics: Blades of the Shogun, stealth isn't just a way of playing. It's essential.

Shadow Tactics is born from the style of Commandos or Desperados: Wanted Dead or Alive: real-time strategy, top-down, isometric stealth games where the enemies stick to complicated patterns and always pose a deadly threat but are easily distracted by shiny objects and booze. There can be multiple ways to complete a level, but in the end, you have to take enemies out one by one and hide them, or sneak around so nobody notices you. Evidence of your existence is a death sentence.

stealth isn't just a way of playing; it's essential 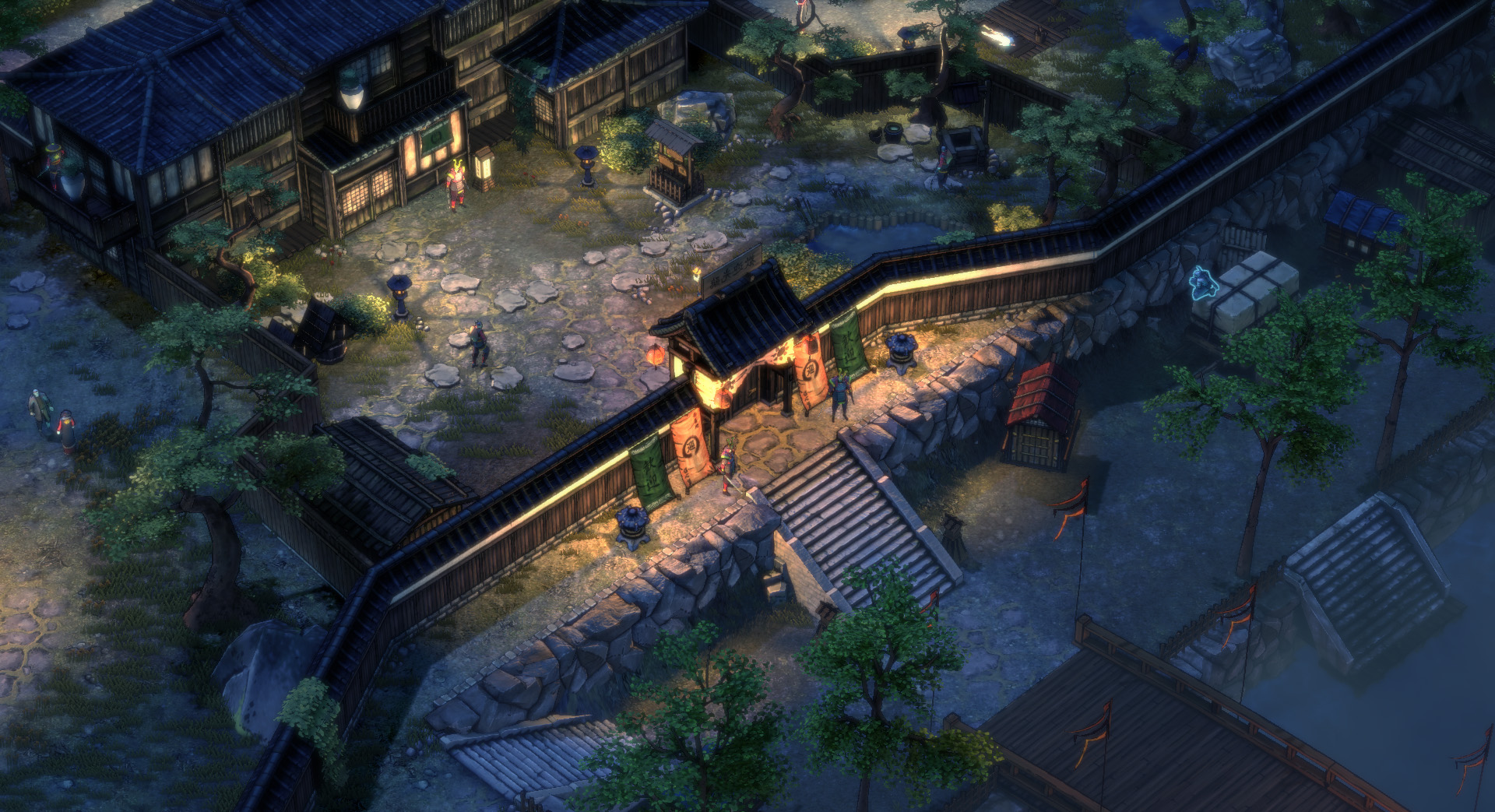 When I say that stealth is essential, I mean that it's impossible to finish a level of Shadow Tactics without conducting an appropriate level of covert operations. You can alert enemies to a degree (in fact, sometimes it helps to make one suspicious in order to lure them into a trap), but you have little health and few aggressive options to play around with in the event of an encounter. It's either stab an enemy in the back with the correct amount of time to get away, or die trying.

But when you can pull off a kill, Shadow Tactics makes it extremely satisfying. In early levels, the guards are spaced out in such a way that I settled into a groove easily, but that never lasted long. Each level has a number of obstacles, optional goals and steps, so they're never straightforward. Strategies picked up in one level can be erased by the demands and situational changes of the next.

Each level also swaps which characters you can control, and they end up as one of Shadow Tactics' most surprising strengths. In a game that's less about narrative and more about level design and gameplay, these characters are still given a lot of attention. Each of the five playable fighters are unique in their fighting styles, with different abilities to mess around with. They also have their own personalities and backstories that add color to their actions, providing smaller, meaningful details.

The character that I found most endearing was Yuki, a young street urchin who learned to defend herself with a mix of ingenious traps and lures. Her small size makes her quick when dashing from bush to bush, and she's light enough on her feet that she can use a grappling hook to hop onto rooftops. However, she's small, so dragging dead bodies is a challenge. One sequence early on in the game has her trying to hide a body in front of Hayato, a professional shinobi who looks on as she struggles. She's determined to move it, despite the obvious physical challenges.

Each character in Shadow Tactics earns sympathy in their own way, and each subsequent level adds a bit more to their personalities and stories. Hayato starts off as an arrogant, aloof man, but you learn over time that he isn't as money-obsessed as he appears. He's also fiercely loyal, despite his tendency to work alone. It took a lot of time and effort to endear Hayato to me, but it worked.

This attention to detail outside of the stealth and gameplay itself ensures that Shadow Tactics can appeal to players who don't typically engage with the genre., but it excels in other areas, such as art. The menu is especially eye-catching and introduces the art style that permeates the rest of the game. It always opens on the same animation: the five playable characters drawn in what looks like pencil, staring off into the distance. Their hair and clothes sway gently to an imaginary breeze, splattered with crimson blood that stands out sharply against the grayscale designs. It's reminiscent of pastoral Japanese art and calligraphy, but it's modern in the sheer amount of detail you can see in the clothing and hair.

You can see all of this in the game itself, although it's tough to appreciate the character designs, since the top-down orientation gives you a far-off perspective. But the game's attention to detail is visible everywhere. The environments, for instance, are vivid and alive. The trees sway, and the river water runs. You can see marks on walls and buildings, the color and shape of individual flowers and the paths beaten into the ground from footsteps. It gave me plenty to admire as I waited for enemies to walk to the proper position, or when I was trying to figure out where to go next.

Shadow Tactics was inspired by other stealth games, but it streamlines the genre

Developer Mimimi Productions was clearly inspired by other stealth games, but it has streamlined the genre through the addition of features that make missions more enjoyable. The ability to move the camera angle a full 360 degrees is especially helpful if you need to peer around a corner. It's clunky to use at first, but considering the slow pacing of the game, it doesn't become a problem. Shadow Mode, which allows the player to coordinate simultaneous actions between characters, is essential to solving many puzzles in the game (even if it's not a huge help outside of those specific instances).

Shadow Tactics implements one other huge improvement to balance the impeccable timing, multiple deaths and dozens of quickloads required to take enemies down: a save reminder. At the top of the screen, a flashing banner tells you the last time you saved down to the seconds. The longer you wait to save, the redder the banner gets. This is one of my favorite features in any recent game. I realize that quick-saving is just a button press away, but it was nice to have a game screaming a reminder to save my progress.

Shadow Tactics fills a hole in modern gaming by harkening back to a forgotten genre and style. It enhances its smart, challenging gameplay with likeable characters, beautiful art and clever new features. It's a style of game that I haven't seen done properly in more than a decade, and while it's handled differently than classics like Commandos, Shadow Tactics packs in a wonderful team of varied characters and tons of ways to experiment with your strategy. It's not just that Shadow Tactics is a decent throwback; it's an exceedingly well-done, satisfying return to a genre's roots.