Dishonored 2 walkthrough level 7: A Crack in the Slab

Share All sharing options for: Dishonored 2 walkthrough level 7: A Crack in the Slab

This is a relatively quick level to play, even while playing stealthily. There are, however, a lot of collectibles in this level that we're not going to touch on in this guide — mostly because getting them takes you on a tour of a guard-filled mansion. We'll point out the obvious and convenient ones, but, as always, the full list is in the collectibles guide. If you're going for them while remaining unseen and not murder-y, remember to save often and take your time.

When the level starts, you'll notice that you no longer have any magic so we'll sadly not be using Domino at any point. There's nothing to do outside, so after admiring the three manta ray statues (this guy really likes that manta ray statue), head inside Stilton's manor through the front door. The place has clearly seen better days. Once inside, you'll be able to see Stilton off to your right, but you can't get to him. You have to go the long way around. Head up the stairs.

There's an easy to find rune in the room in front of you at the top of the stairs. Turn left from the stairs and go down the hallway to find the room over Stilton. The floor is rotted out and you can drop in to chat with him. 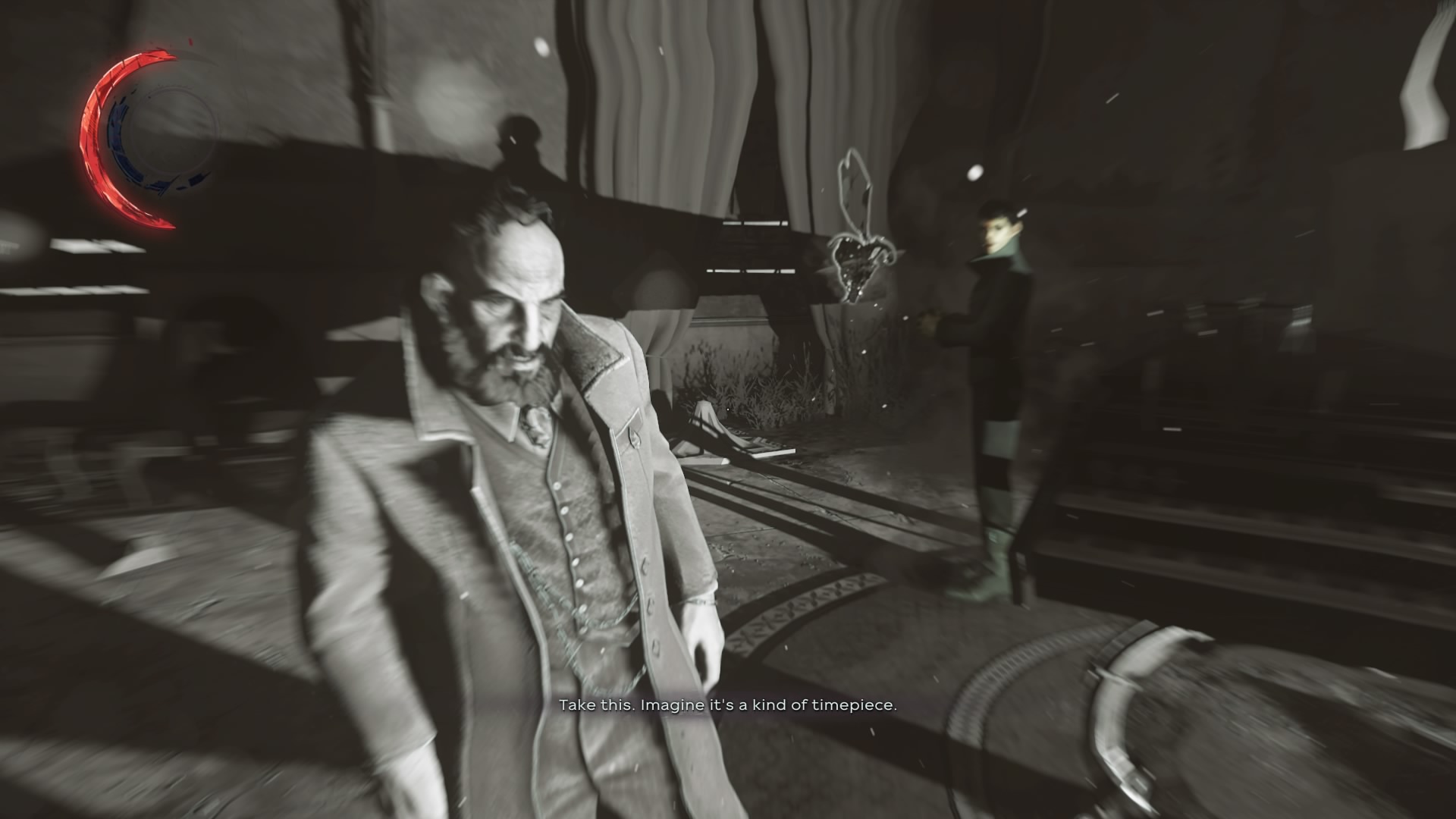 The Outsider will appear and give you the Timepiece. This level is amazing. The Timepiece links you to the night three years ago when the Duke's plan started. It has two functions. You can use the lens to view, in real time, what is happening in the past. Or you can just straight-up travel to that night — though nothing you're carrying (like a body or a bottle) comes with you. 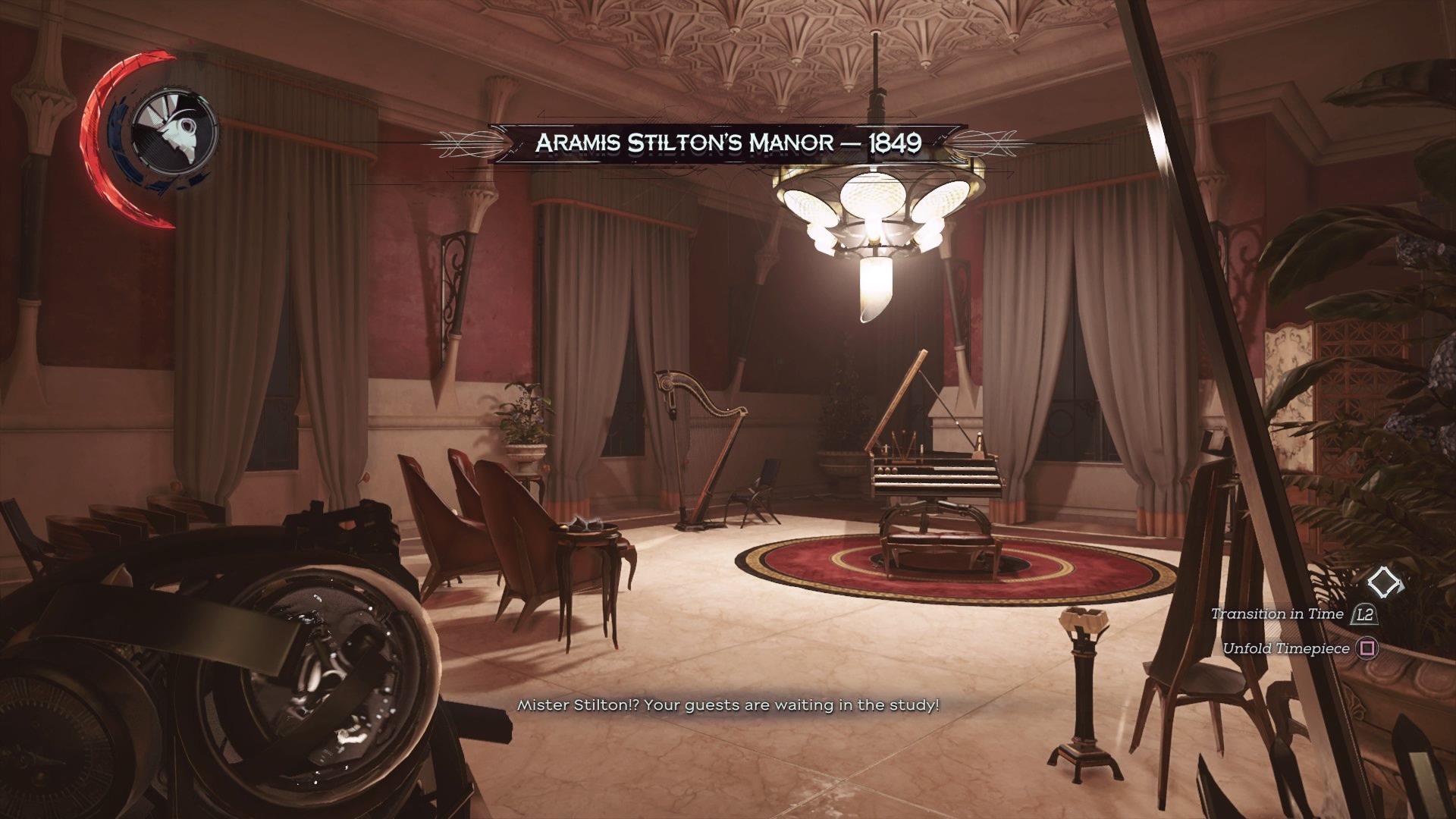 Try out the Timepiece inside Stilton's room. You're going to be stuck in here, but you need to hear the guards talking outside. Peek through the keyhole or just listen at the door and the guards outside will tell you what you need to do in this mission — get the study door combination from Stilton, who is out back. When their conversation is over, they'll leave. Travel to the present, walk up to the gate, then back to the past where you've just passed through the locked door. Now you're thinking fourth dimensionally (this will be the only Back to the Future reference we make, we promise).

Check the note on the door to the room you just escaped from for some more context, then head toward the planter-thing you can see in the next room. Use it for cover, since there are a couple guards not too far away. At the planter, turn right and go into the kitchen.

There are two civilians inside, but they probably won't make much fuss. Turn right and climb up onto the cabinets. Keep climbing up to the ledge. Follow that around to the closet where you'll find a closed window. Travel back to the present to find that the window is open. Drop through into the closet. 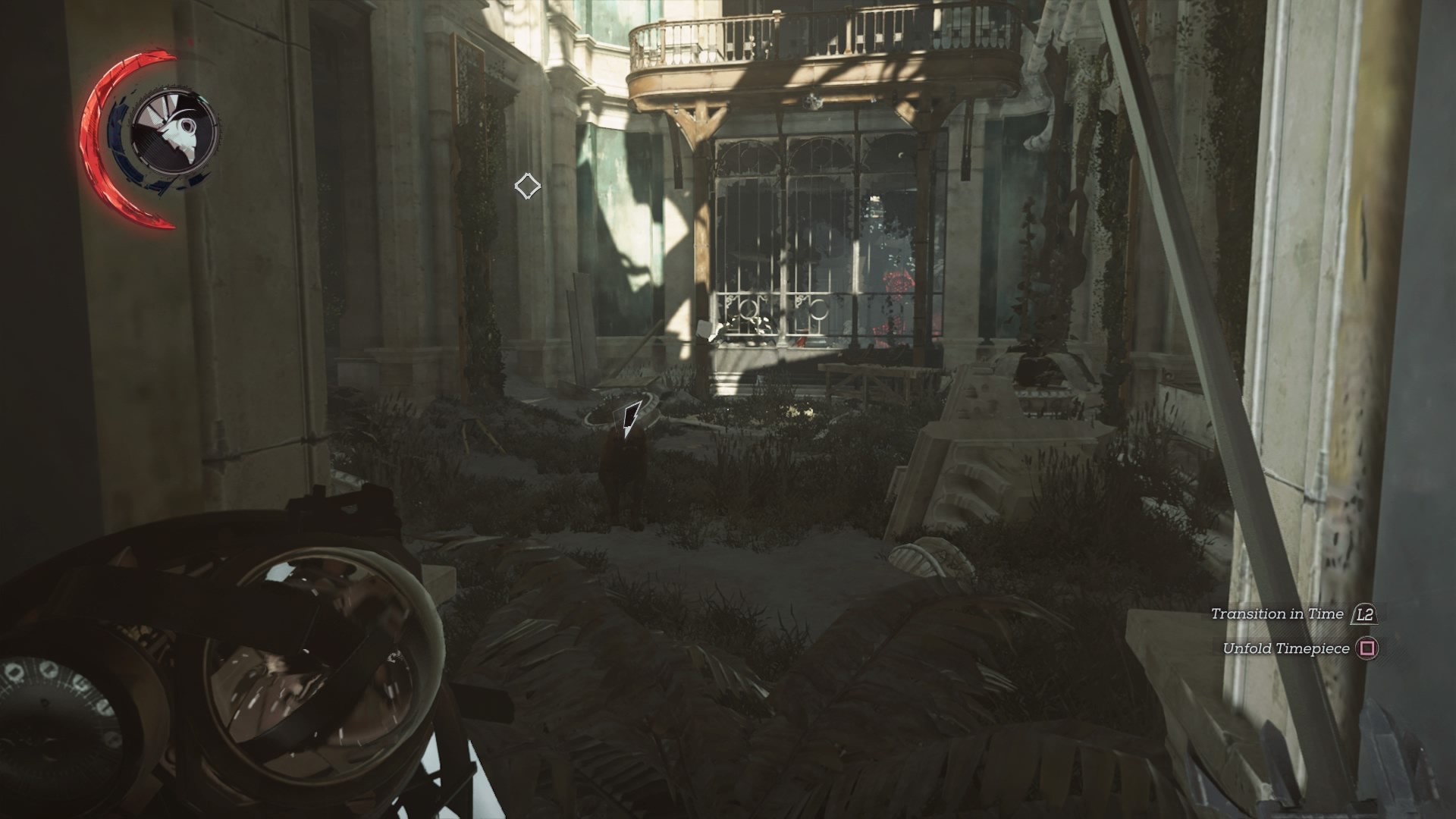 Stay low and out of sight because there's a wolfhound patrolling the courtyard outside. Wolfhounds do not count as kills, and unless you've got the bonecharm that keeps them from attacking, you're probably going to have to take it out. Stick with the regular crossbow bolts for a silent kill from a distance.

Turn left inside the courtyard to find an open door into another hall. Turn to your right and climb up the dust pile to the second floor (if you look through the lens at the past, you'll see a set of stairs here). Handle the bloodflies — we recommend a well-placed grenade — but watch out for a nest master that approaches from your right. (If you want to explore the rest of this floor, there are several more bloodfly nests to handle and one more nest master pretty much directly behind you.)

Climb onto the bloodfly nest you just destroyed and get as close to the door as you can. Open the Timepiece's lens and look at the past. There's an elite guard guarding the door and a couple more patrolling. Make sure you're crouching, then watch until the elite is more or less alone. Travel to the past and exit through the door to the Back Courtyard. 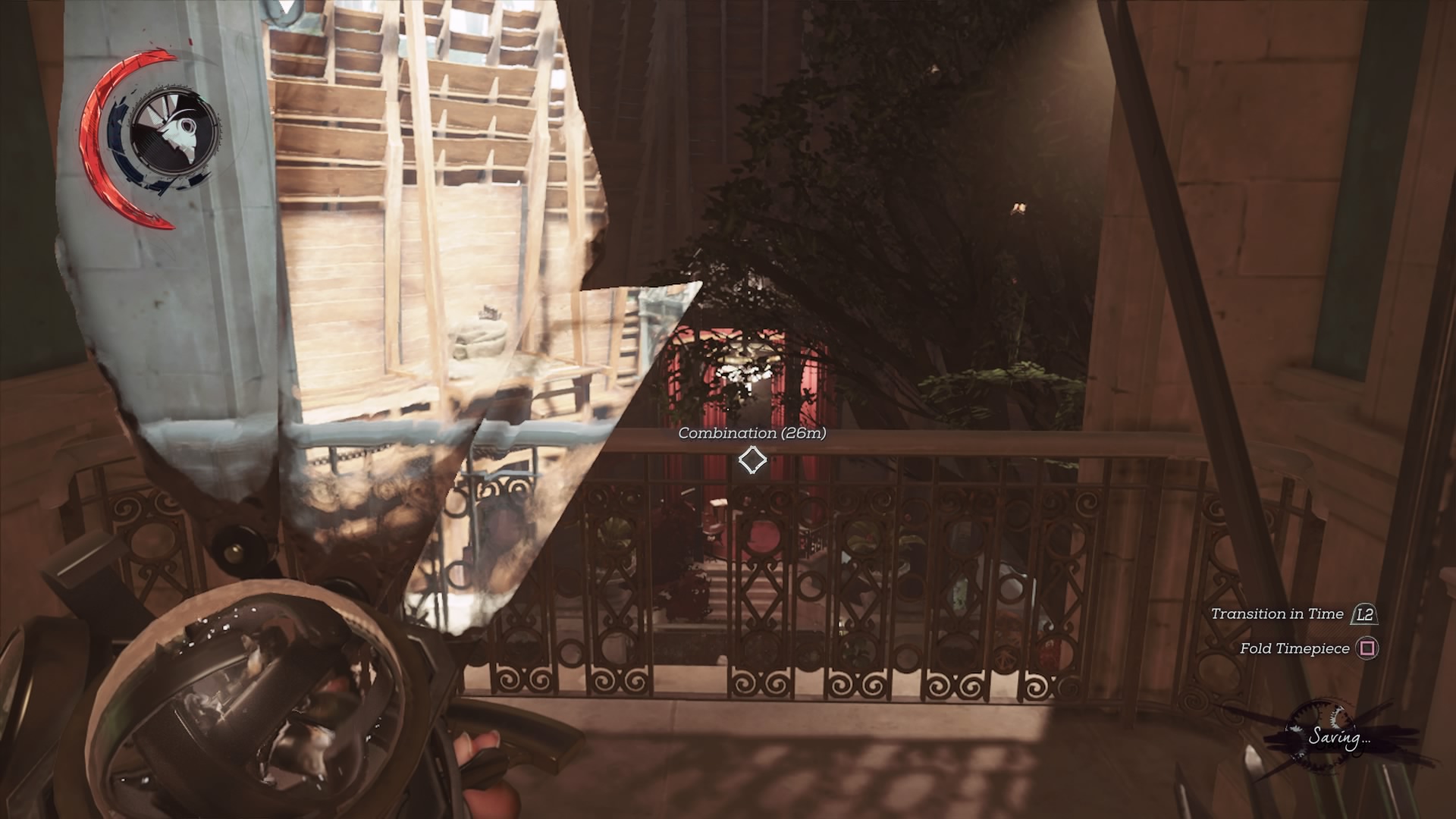 For ease of movement, travel back to the present. You'll probably land in or next to a bloodfly nest, so just be prepared. In the present, Stilton's back courtyard is just as deserted as the manor. There are three wolfhounds on the ground and several bloodfly nests around. Clear them all out so you can maneuver without concern. 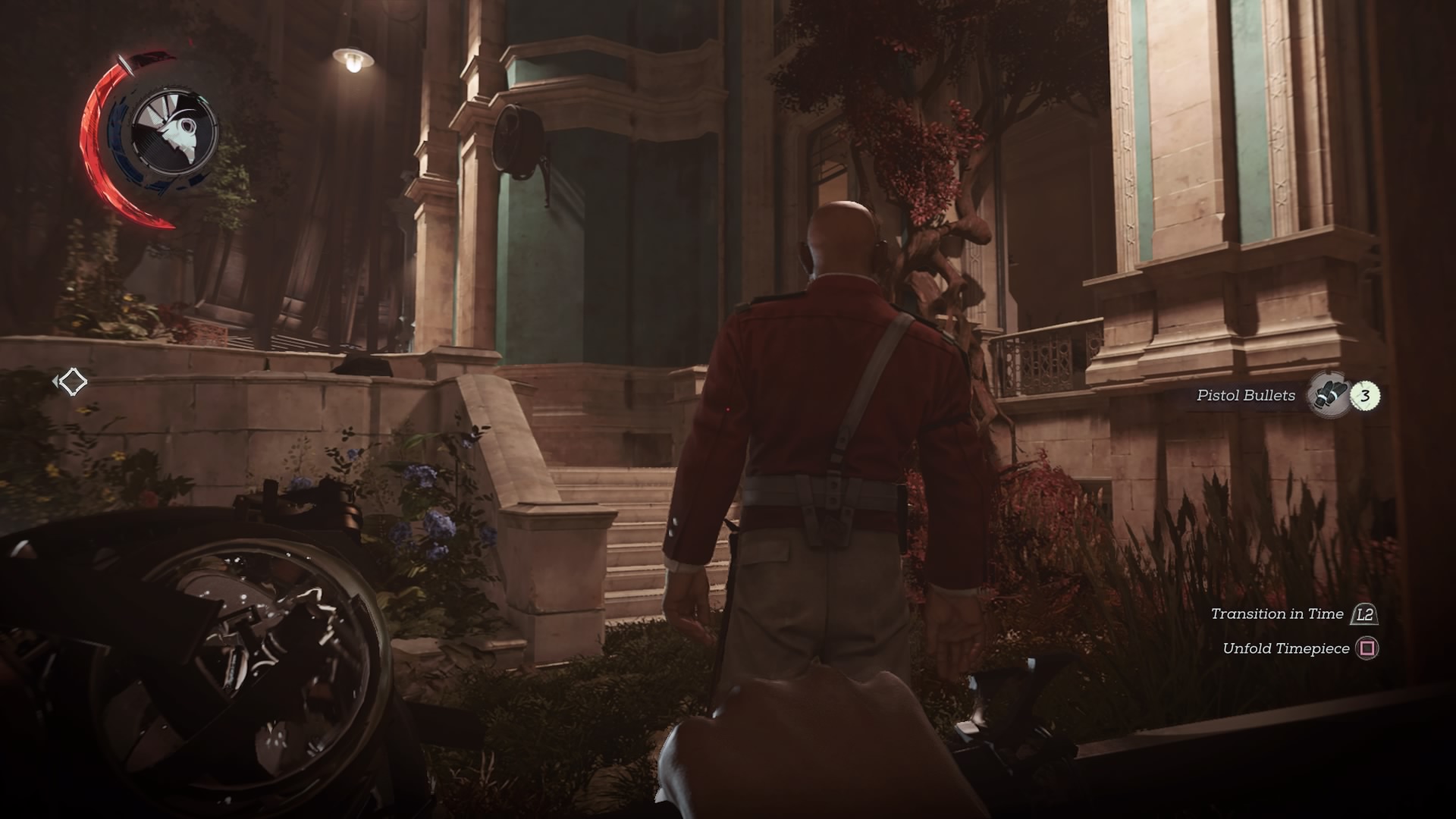 Once all of the pests are handled, turn your attention to the past. There are a total of three guards in the courtyard with Stilton. We have to knock out two before we can confront him. Starting near the house on the ground on the left side, there's an elite that doesn't move. Knock him out and stash him out of sight. Just watch for the blue-shirt guard that's patrolling the patio in front of him. 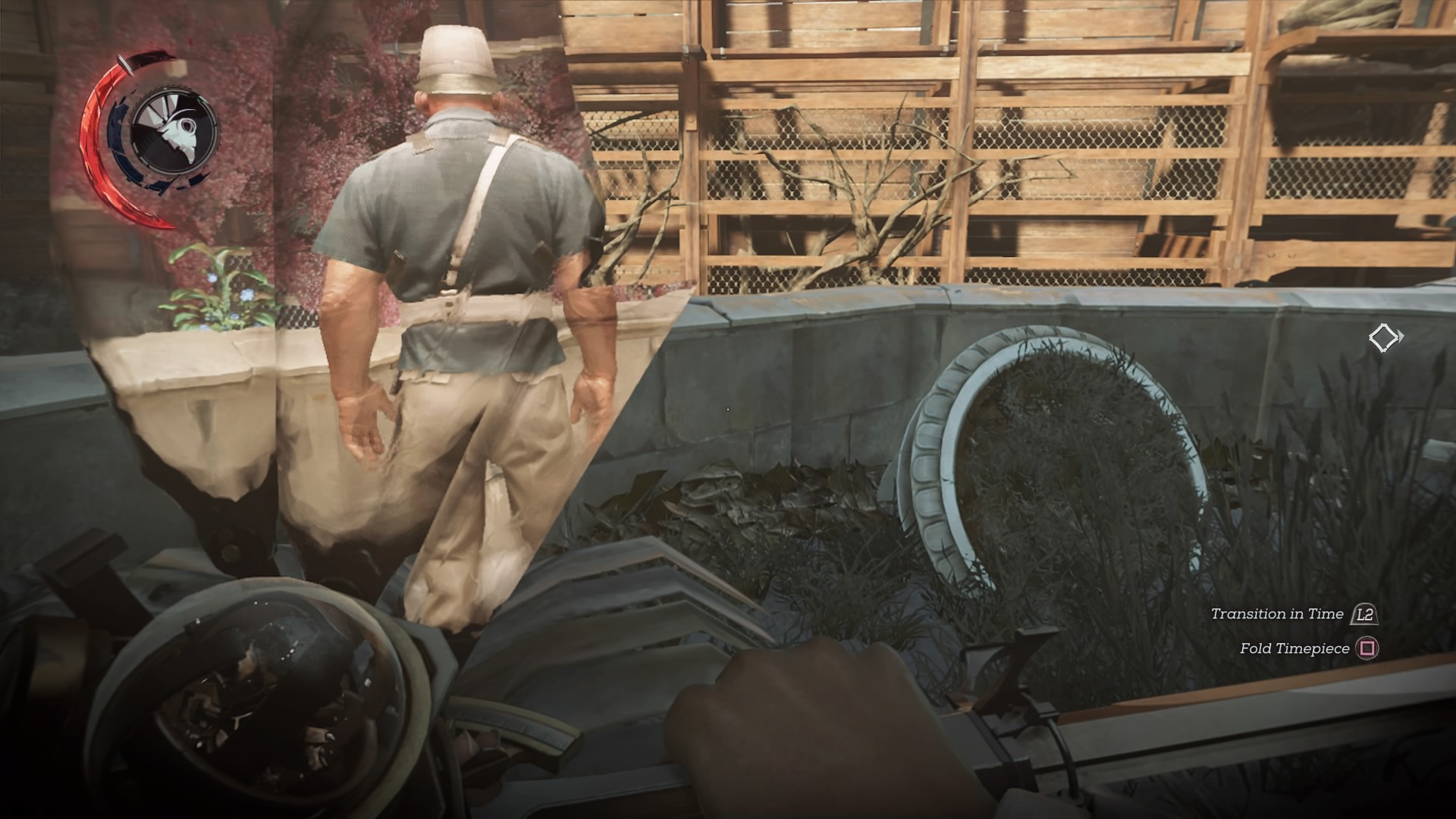 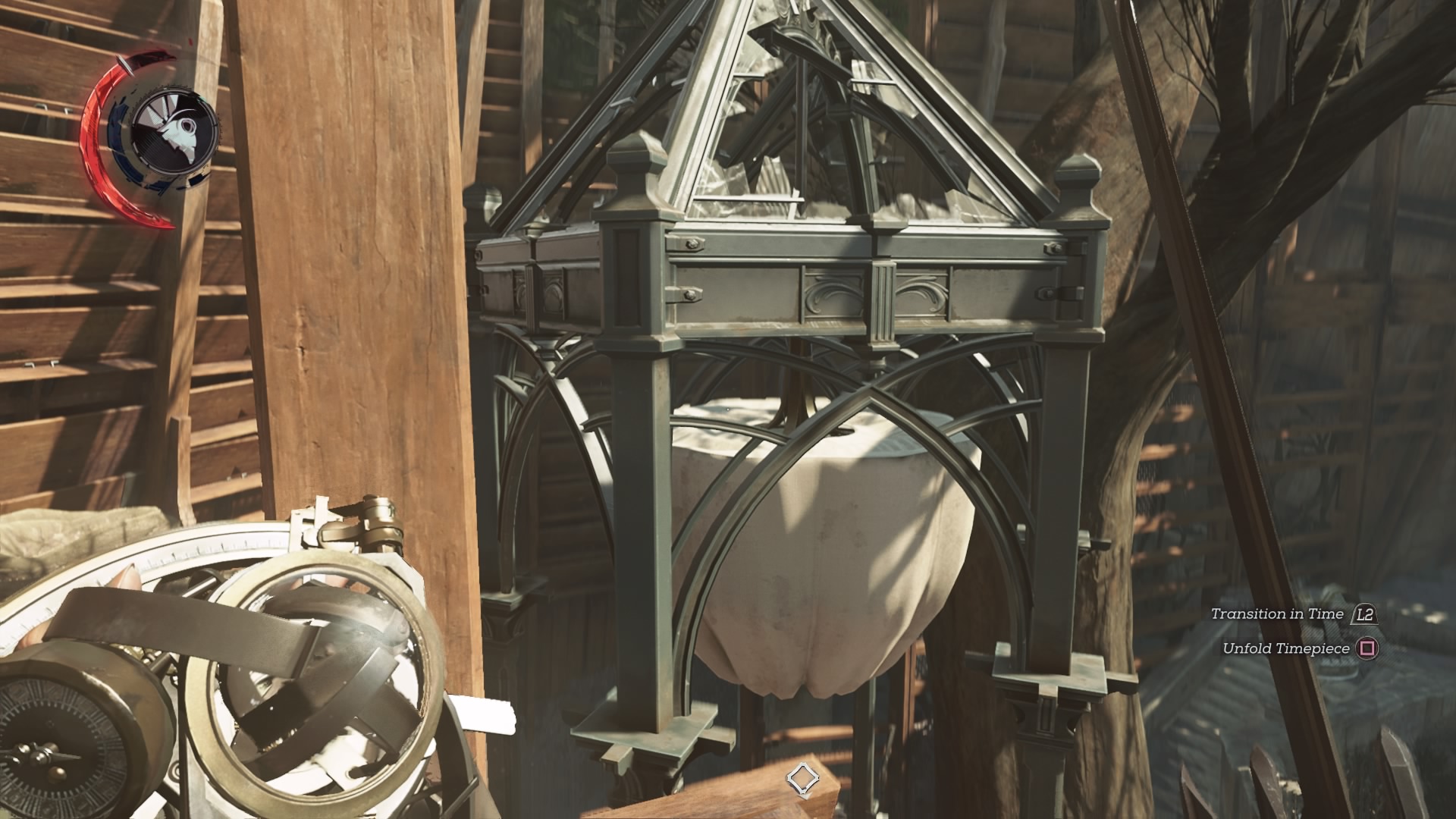 From where you knocked out the blue-shirt guard, head back to the manor. Turn right and go to the windbreak wall. There's a walkway there you can climb to. Follow it out until you can climb on top of Stilton's gazebo. Drop through the broken roof onto the chandelier. Then travel to the past. 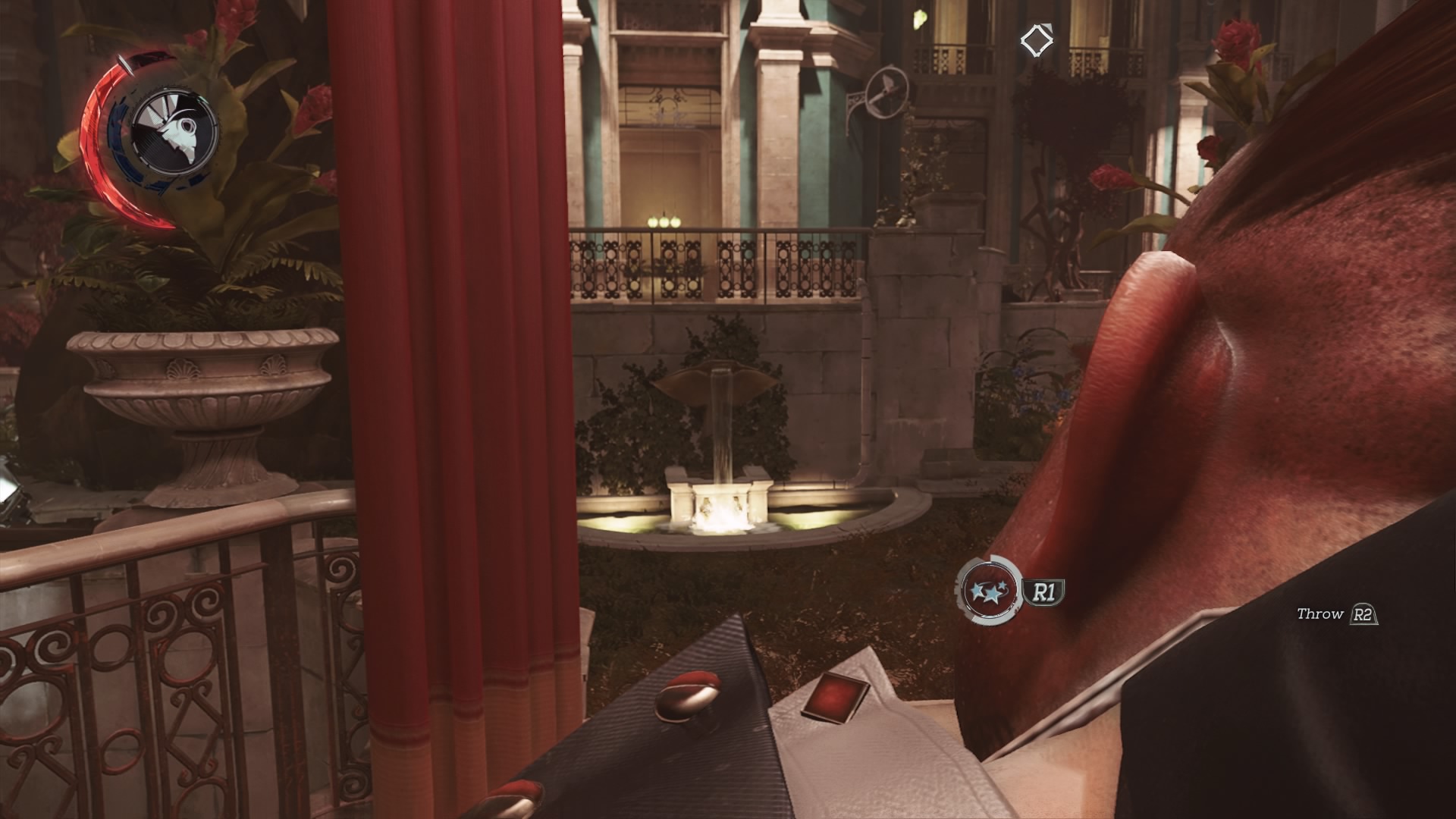 There's not a lot of room to maneuver up here, but luckily we don't have to go far. Watch as Stilton paces and wait for him to face away from the couch. There's just enough room between the chandelier and the wall for you to drop down onto that couch. Do so and grab Stilton. 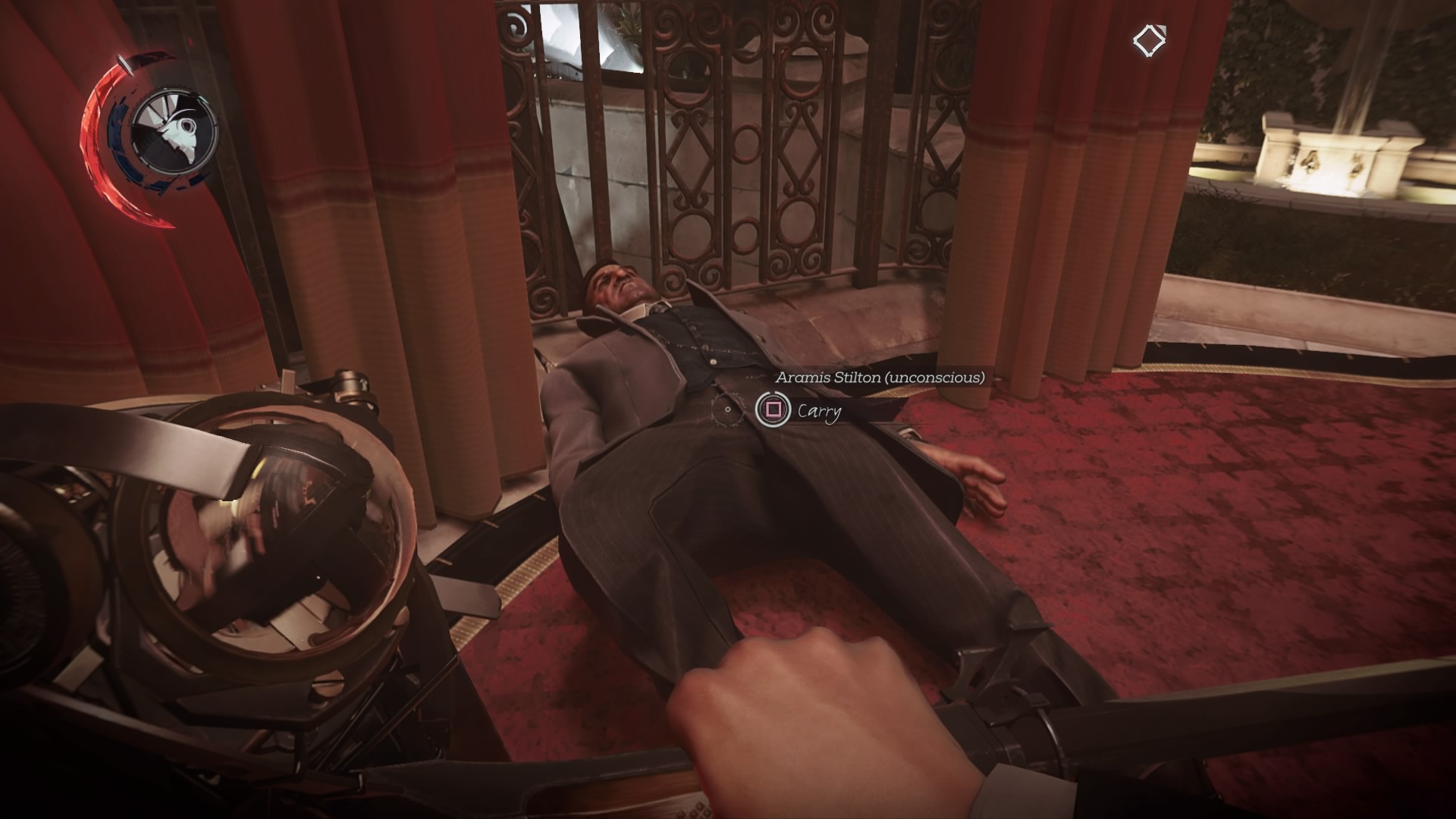 You technically have three choices here: You can kill Stilton, knock him out, or leave him alone. Killing him is obviously not ideal for a low chaos outcome. Leaving him alone doesn't change anything. Knocking him out, however, means that he's not conscious to participate in Delilah's ritual. He doesn't see whatever he sees that drove him crazy. You'll see why we recommend knocking him out in a minute. 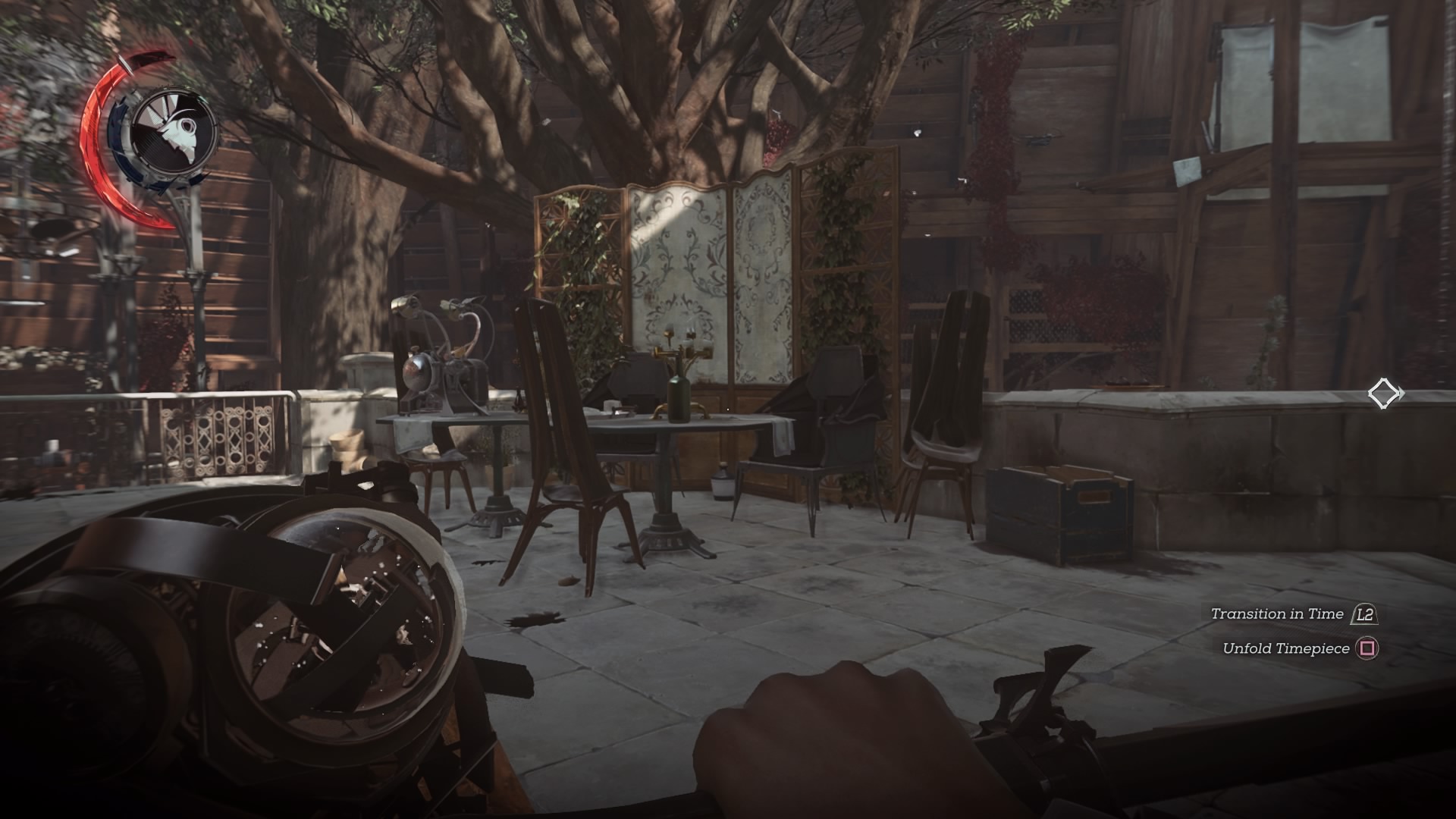 The book in the gazebo has the code for the lock on Stilton's study, but we don't actually need it any more. Travel back to the present and you'll notice that things are much different. The manor is restored to its former glory and there are servants wandering around.

From the gazebo, face the manor and turn left. Get to the lowest path and follow it around toward the manor. You'll come to a worker standing next to a chain. The worker doesn't take kindly to you wandering around, so you're going to have to knock him out. After he's handled, climb the chain to the second level.

Follow the walkway back to the house, then jump to the balcony. Use the door to enter the manor. Inside, there's a servant that will also not like you being there. Knock her out as well. 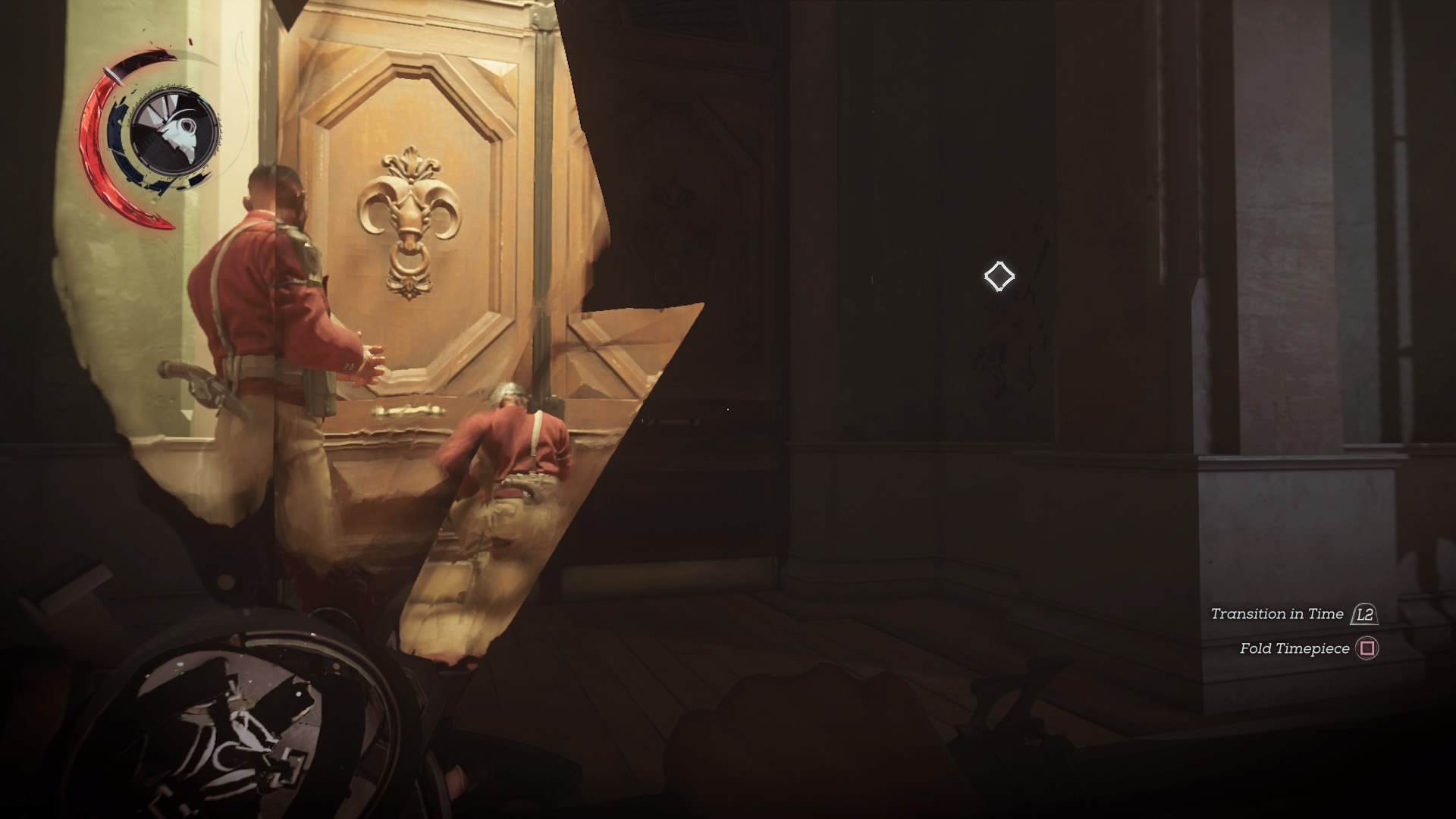 When you walk over to the door to Stilton's study, you'll notice that lock is no longer malfunctioning, it's been removed. And in the past, those two elite guards are still eavesdropping, so you can't get in then either. If you look closer, though, the only thing blocking your progress in the present is a couple of planks. Destroy the planks and enter the study. 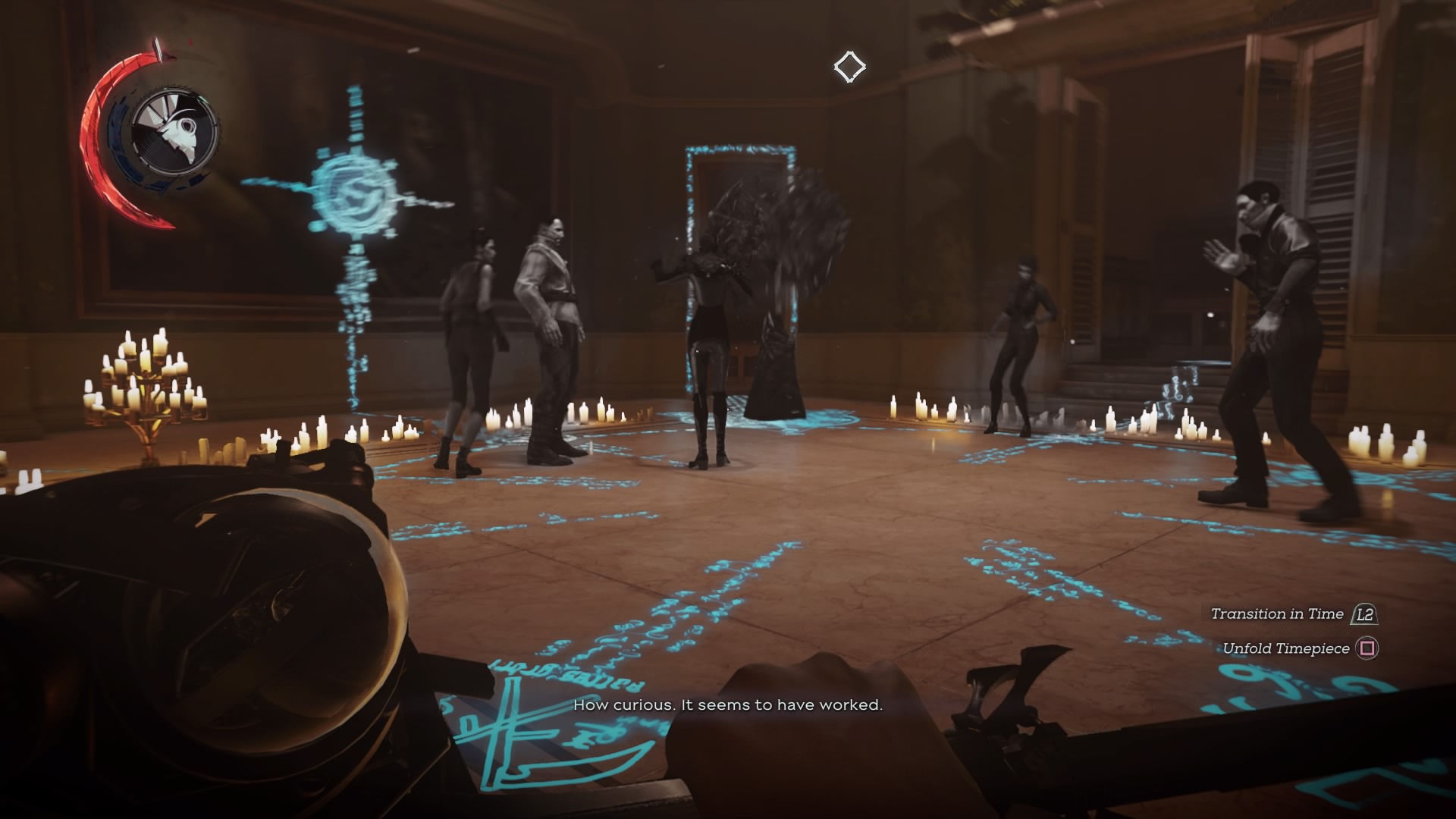 Watch the ritual that started all of this and you'll learn that Delilah can't be killed because she's got a horcrux. This scene will just play on repeat. 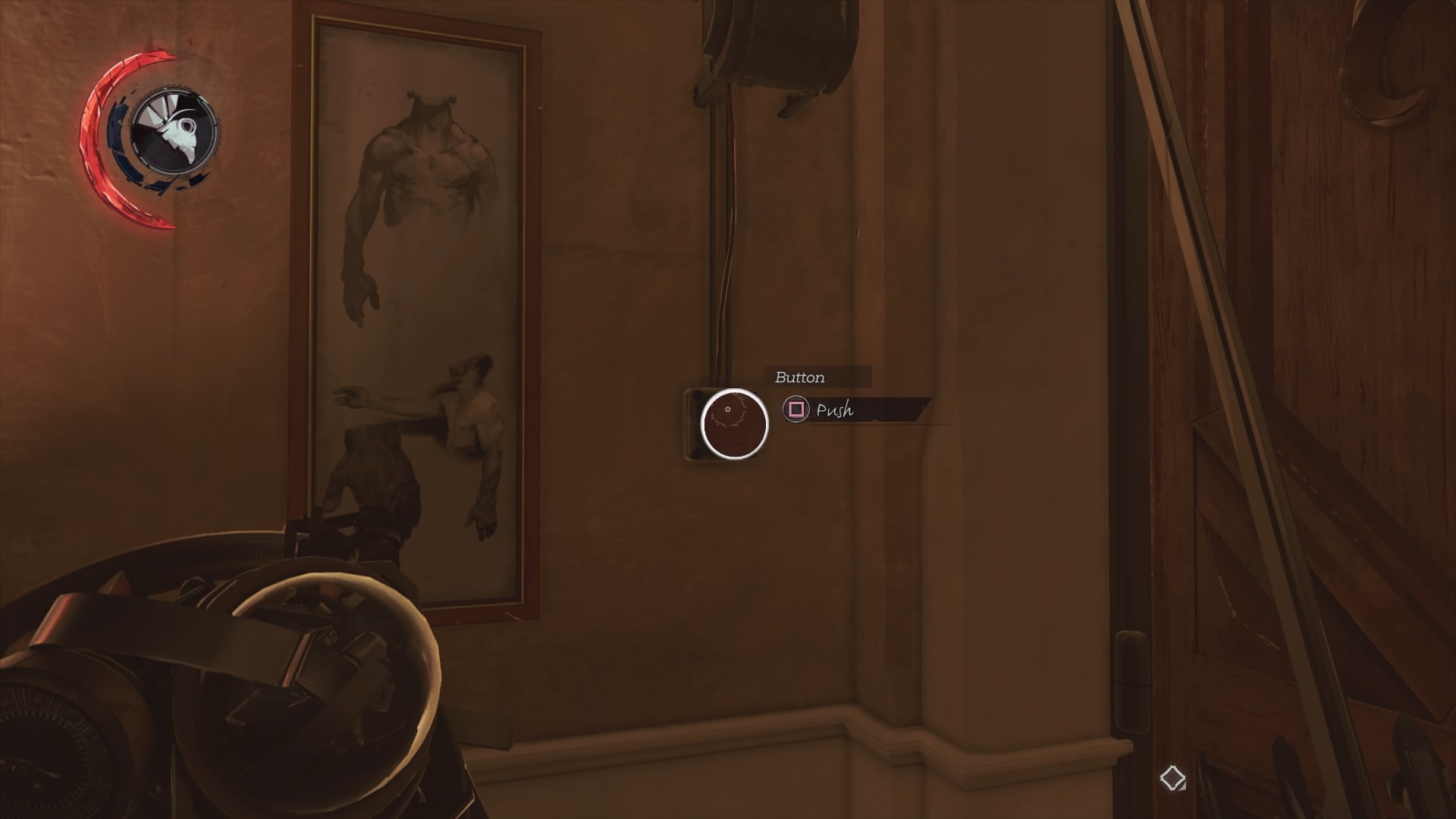 When you're ready to leave, use the button next to the door. (We got stuck here for an embarrassingly long time because we didn't see the button.) 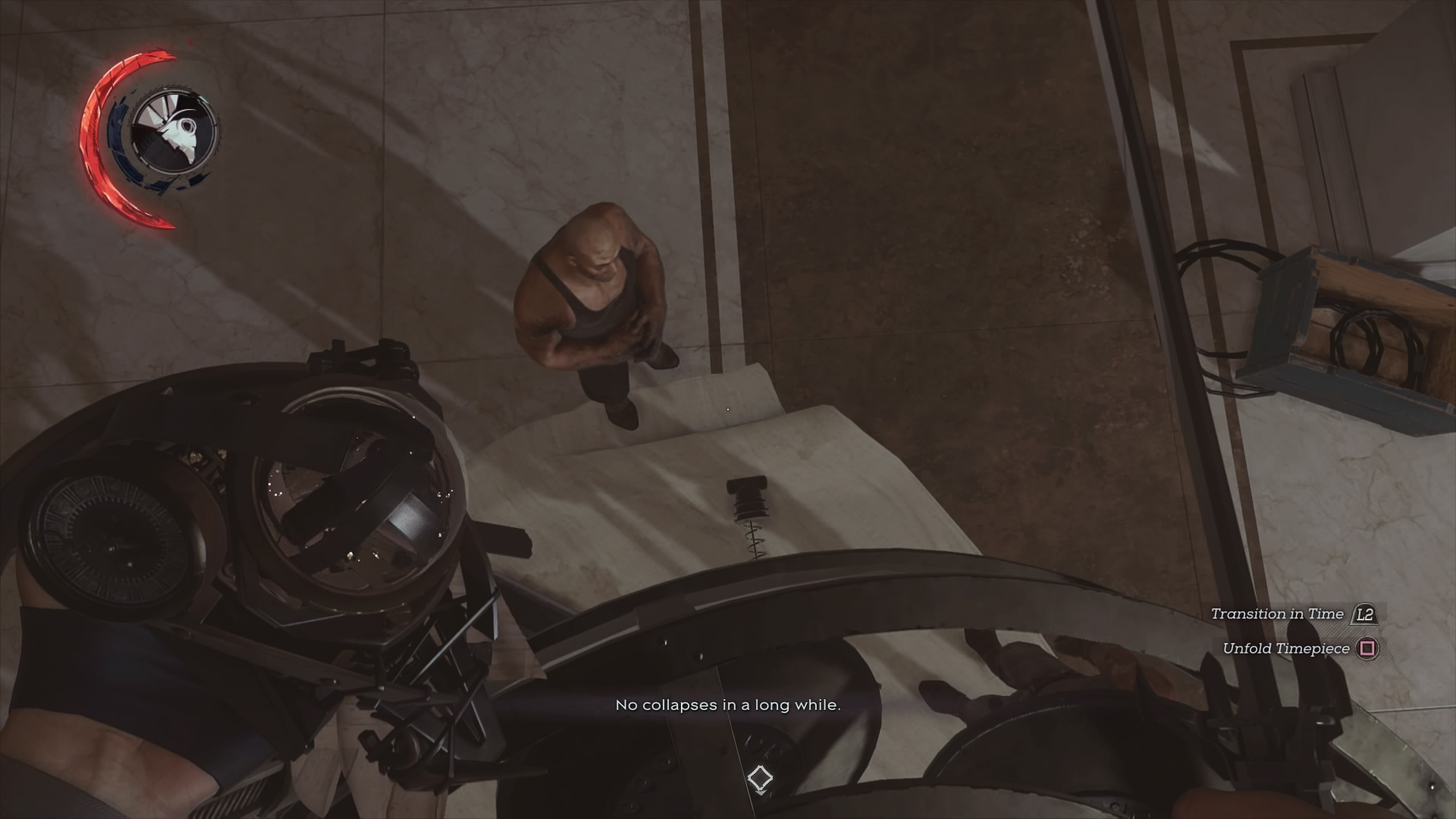 Work your way back through the house to the front door staying out of sight as much as you can — you're not supposed to be in here and the staff knows it, but they'll warn you first before freaking out. As you go, you'll overhear the staff and workers talking about how great Stilton is. This is why we recommended knocking him out - he's one of the good guys.

Keep heading away from the manor and back into the Dust District. Before you get there, you'll take a quick trip to the Void and have a one-sided conversation with the Outsider.