No Man’s Sky’s Foundation Update is promising, yet frustrating

The more things change, the more they stay the same

Share All sharing options for: No Man’s Sky’s Foundation Update is promising, yet frustrating

Last week, Hello Games finally broke nearly three months of self-imposed silence about No Man’s Sky and released version 1.1 of the game into the world. Known as the Foundation Update, it brings in some significant changes to the way No Man’s Sky works, as well as plenty of tweaks that make life better for players.

The Foundation Update will be too little, too late for plenty of people. Yet as someone who played No Man’s Sky for hours upon hours during its launch week in early August, but quickly soured on the experience — until last Monday, my most recent save file was dated Aug. 27 — I thought I’d hop back in and check out the much-ballyhooed patch. The game I returned to was alternately delightful and frustrating, tugging at the curious explorer in me while stifling my progress with poorly explained obstructions.

Hello Games has repeatedly described No Man’s Sky as a “chill game,” saying it was designed as an experience that can be whatever you want it to be. Of course, one person’s “open-ended” is another person’s “aimless,” and for my tastes, the original game had too few worthwhile objectives to achieve and too many arbitrary roadblocks along the way. The Foundation Update is definitely a step in the right direction, but it’s not transformative.

The infinite beauty of the universe

As colorful and unique as the planets of No Man’s Sky could be, they weren’t all that different when you got down to exploring each one. If you started hopping from planet to planet, they began to run together in a haze of barren deserts and underground mineral deposits, and the cookie-cutter man-made structures on each one certainly didn’t help.

The structures haven’t changed, exactly — more on that in a bit — but the Foundation Update undeniably introduces a greater level of variety throughout No Man’s Sky. In the update’s patch notes, Hello Games listed dozens of tweaks to the algorithms for generating worlds and the flora and fauna on them, and it shows; the combined effect is a palpable improvement in the diversity of the universe, on multiple levels. 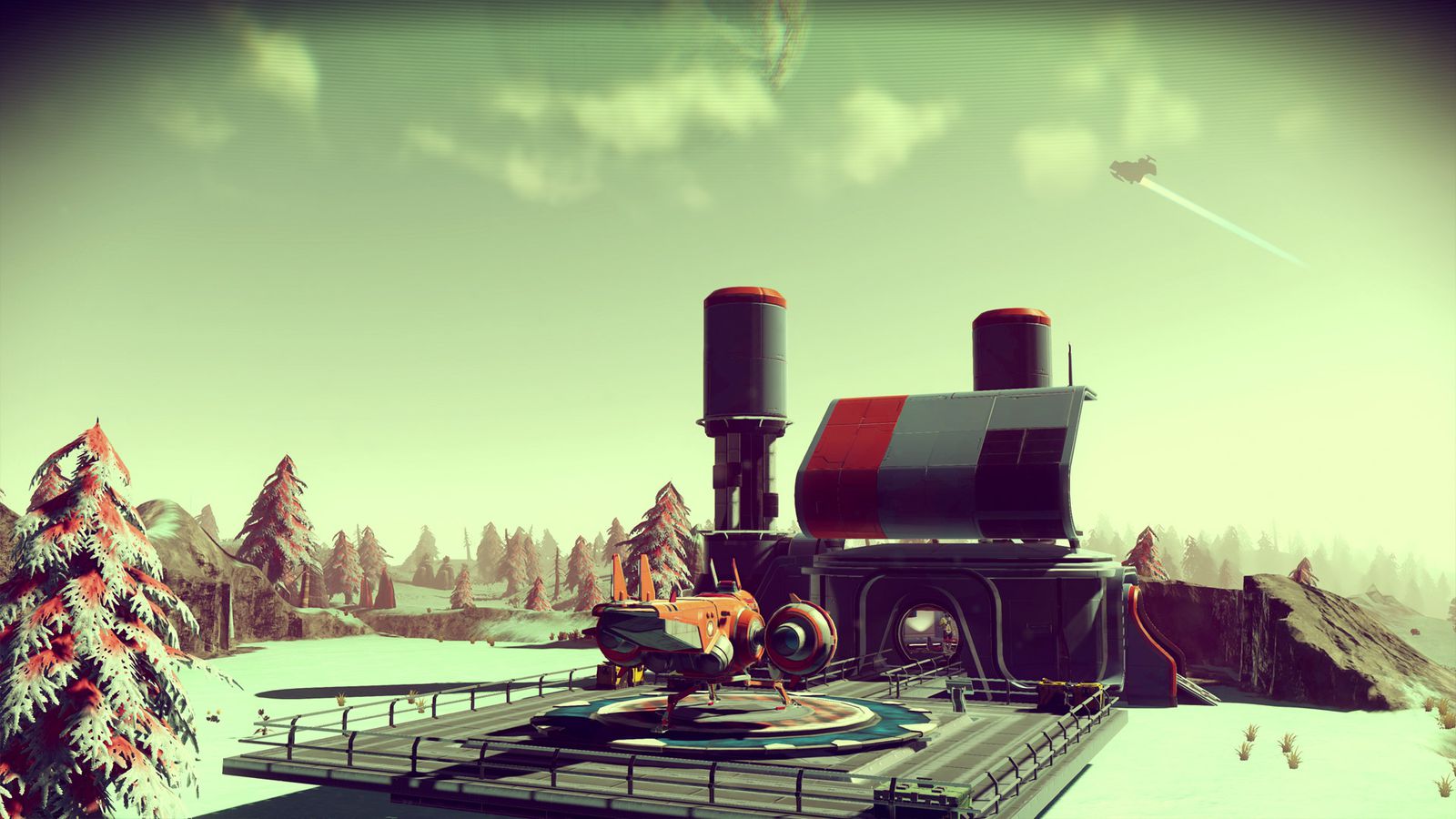 Planetary topography is more varied, with bodies of water now including rivers, not just lakes, as well as tall rock formations that you could properly call mountains. There are wide-open plains dotted with groups of plants, and not just on featureless, boring worlds.

Everything is more colorful; in fact, the patch notes specifically mentioned that Hello Games reduced the amount of brown-colored terrain. It seems like there are fewer animals that look like abominations against nature, and many plants now grow in clusters of foliage rather than in seemingly random spots.

This increased diversity applies after you take off into the sky, too. You’ll see thicker clusters of asteroids, and they’ll sometimes differ in size and shape from galaxy to galaxy. Groups of freighters hovering near planets are veritable fleets now, with a large capital ship leading many smaller vessels.

In essence, what you see in No Man’s Sky is finally approaching the gorgeous screenshots and trailers that Hello Games used to promote the game.

If you wanted a more structured, goal-oriented experience out of No Man’s Sky — and I certainly did — then you will be at least somewhat satisfied by the Foundation Update.

Its most significant new feature is the ability to plant your flag on a planet by building a base. This process begins at a new building type, a “habitable base,” which will show up on some planets but not all of them. The nice thing is that if you start somewhere but later find a more hospitable world — or just a prettier one — you can pull up stakes and set up shop on the new planet, and you’ll get back all the resources you put into your original base.

The initial base consists of a single round anteroom from which you build outward. Thankfully, the anteroom includes a portal, so you’ll always be able to teleport back to your home base from wherever you are in the cosmos. Constructing the facility is simple, even with a controller; it’s perhaps the most user-friendly activity in a game that is notoriously, annoyingly obtuse. You’ll want to build at least four of the round rooms, since you can only put one specialist in a single room.

You may be wondering what a “specialist” is. Well, in addition to constructing a base, you can fill it with other people by hiring alien comrades — a builder, scientist, armorer and farmer — from space stations. This is the meat of the base-building part of the Foundation Update: a lengthy chain of quests in which you staff up your facility and expand its capabilities.

Farming is perhaps the best reason to build a base. Resources are great for surviving in No Man’s Sky, but you’re usually better off selling rare minerals like emeril for a tidy profit. The Foundation Update adds more than 10 new resources to the game, and it’s possible to farm many of the exotic ones by growing plants in your facility’s lab — along with valuable items like Gravitino Balls and Albumen Pearls.

This should help you get rich more quickly, which is necessary to take advantage of another major addition in the Foundation Update: freighters. The first freighters, which have around 13 inventory slots, cost more than 7 million units.

Thirteen slots may sound like a ripoff for that much cash, but a freighter’s storage bays can hold twice as many resources as your spaceship: 1,000 in a single slot instead of 500. What’s more, you can use the base-building interface inside your freighter to build more cargo holds, and can also hire specialists — as you would at your home base — for activities like onboard farming.

So far, I haven’t gotten close to being able to afford a freighter; my bank account is sitting somewhere north of 1.5 million units. Then again, I haven’t kicked my farming operation into full gear yet, so I’m hopeful that I’ll soon be rolling in the dough.

If you don’t want to worry about constraints, though, you can check out Creative mode, one of two new ways to play No Man’s Sky. You have unlimited health and resources in Creative mode, and while the game still says that you have to spend materials to build parts of your base, doing so actually costs no resources. The other option is the polar opposite: Survival mode, where resources are much more limited and using your jetpack, or even running, severely depletes your life support system.

Much of the Foundation Update is focused on delivering quality-of-life improvements to No Man’s Sky. Additions include the sound of raindrops hitting your spaceship, groups of multiple aliens inside space stations, and the ability to scan planets from space to see which resources they hold, and they all go a long way toward making the game more fun to play.

Many of the new features also demonstrate that Hello Games has been listening to No Man’s Sky players. There’s still no in-game map for any planet you’re exploring, but now it’s possible to mark locations for future reference with color-coded waypoints. The drudgery of mining by hand remains a major part of the game, but you can now craft a tool that automatically extracts ore from large mineral deposits. People complained about inventory management, so Hello Games made it possible to stack items in slots everywhere except in your exosuit, and added a quick access menu.

I rarely engaged in pirate battles before the Foundation Update, so it’s hard for me to confirm this, but space dogfighting feels more dynamic now. I’m seeing pirate vessels fly in formation as they attack me and other ships, and shooting them down is challenging because of smarter AI rather than poor controls. (To be clear, there’s still no lock-on targeting, which means the combat is more difficult than it could be.) Plus, if you rescue a freighter from a pirate attack, you now get rewards from the ship’s commander.

... but it’s not meaningfully different

As I eased myself back into No Man’s Sky last Monday and played more on Tuesday, I noticed I was starting to enjoy myself. I kept finding increasingly beautiful planets and coming across stunning vistas in outer space. I hovered in place, taking in the sight of a gigantic freighter and its accompanying fleet before landing in one of the vessel’s docking bays.

I thanked my lucky stars for the new quick access menu when I needed to recharge my shields while fending off pirates. And after collecting my rewards for defending a freighter from those evildoers, I flew to the star system’s space station and teleported back to my base on Kodosia, the planet I call home. (Don’t blame me for this election, America; I voted for Kodos.)

But then I began running into the frustrating issues and constraints that still exist in No Man’s Sky. I needed to recruit a scientist, and science specialists are always of the Korvax race of aliens. It turns out that you can only find a scientist in a Korvax star system, and there’s no indication on the universe map of which race calls a particular system home. I warped to four or five different star systems before I encountered one inhabited by Korvax aliens, expending plenty of materials to craft Warp Cells along the way.

The Foundation Update appears to have greatly limited the abundance of certain resources. Some of them are as vital as plutonium, which is the only thing that will recharge your ship’s launch thrusters. Other naturally occurring resources, like chrysonite and titanium, can no longer be harvested from the environment without a couple of equipment upgrades.

You unlock those upgrades by filling out your base’s staff of specialists and completing tasks for them. But those exercises amount to little more than a series of fetch quests: They’re all about hunting down resources to unlock crafting recipes, which allow you to ... pick up more resources and recipes. I’ve also received as “rewards” plenty of recipes that I already have.

the same question has plagued No Man’s Sky all along: What’s the point?

All of this eventually falls victim to the same question that has plagued No Man’s Sky all along: What’s the point?

I suppose a freighter (and the large bankroll necessary to purchase one) is something to strive for. But unlike with spaceships, you won’t come across crashed freighters that you can salvage. That means that you’ll soon be spending tens of millions of units for each incremental upgrade — a couple of slots, maybe — to freighter storage.

And ... that’s it, at least at this stage. Neither bases nor freighters currently serve any purposes beyond farming and storage, although you can certainly build some incredible facilities and buy some awesome-looking vessels.

To be clear, the Foundation Update — which, as far as we know, was developed in just three months — does include all kinds of changes and improvements that have a noticeable positive impact on No Man’s Sky. And in fairness to Hello Games, the studio said that the v1.1 patch is named thus because it is “a foundation for things to come,” and will be “the first of many free updates” to the game.

For now, the Foundation Update definitely makes No Man’s Sky a better game — just not a different one, at heart. But after spending a couple of days with it, I’m once again excited about No Man’s Sky’s future prospects.

No Man's Sky Foundation Update: We're building our own base with Charlie and Samit!