Dead Rising 4 is a game with very specific, holiday-focused timing.

It’s not that the fourth proper Dead Rising game — and the third from Capcom Vancouver, which took over for the Japanese publisher with the second installment — is the only game this year to take place in a holiday setting. Ubisoft’s The Division launched in March with a similar premise: a viral disaster that began during the pre-Christmas Black Friday shopping rush. But where The Division’s tone is a generally serious, disquieting look at society held together by a frayed string, Dead Rising 4’s is ... not.

In fact, the smashed-together combination of gore, slapstick and Christmas is the kind of mashup rarely seen in video games. Dead Rising 4 isn’t without issues — some of which chip away at the series’ defining characteristics in ways that will surely prove divisive. But right at this moment, the return of Frank West feels like a much-needed catharsis for big-budget open-world games.

Dead Rising 4 sees the reluctant hero who started the series return, as Frank West once again finds himself stuck in a mess he’s surprisingly capable of navigating, given the fact that he’s kind of a dipshit. Frank is largely doing the same things this time around. He’s still got his camera, which has been modified to allow for a kind of investigation minigame at various points, one very familiar from countless other titles at this point. You’re still fusing various tools and household items — or, occasionally, vehicles — into bizarre and deadly new combo weapons.

My favorite is the Gandelf, which is made from a spear and a holiday garden elf. Which shoots exploding elves, and can be slammed down on the ground like … well, you get it.

The setting this time around is also familiar: the fictional Colorado town of Willamette, the scene of the original zombie outbreak in the original Dead Rising. Willamette was rebuilt in the 20 years following those events, but the city held more secrets. A fugitive Frank is forced to once again face his shambling demons, this time surrounded by snow and Christmas decorations. And Christmas presents. And Christmas songs.

Did I mention that Dead Rising 4 takes place around Christmas?

This is probably my favorite thing about Dead Rising 4. Zombie games aren’t unique anymore. Even open-world zombie games are fairly commonplace. This is, for example, the fourth Dead Rising game. Christmas, on the other hand, adds a unifying theme to Dead Rising 4 that glues everything together, and gives minor points of exploration for some of the series’ old staples, like Maniacs, several of whom are holiday-themed.

But compared to previous Dead Rising games, the Maniacs — themed boss characters who were previously referred to as Psychopaths, rebranded in what appears to be a not entirely successful attempt to make them less offensive with a new name — have been considerably de-emphasized.

There are still boss battles, but they’re generally against much more pedestrian enemies, like soldiers in power armor or particularly strong zombies. Meanwhile, Maniacs are side quests, easily skippable if you’d rather not get involved, with little of the drama or presentation seen in previous games.

This is a consistent thing in Dead Rising 4. Stuff that was a Big Deal before has been considerably mitigated.

For example, you can still save non-infected humans from zombies for a small reward. Before, you had to babysit survivors on their way back to a safehouse, or give them weapons and hope for the best, but here, once they’re saved, they’re good. They go right back on their way. It’s one less point of failure for the player, and Dead Rising 4 has fewer of them than any game in the series.

The most game-changing shift, however, has to do with scarcity — or the lack (no pun intended) thereof.

Inventory space used to be at a premium, with limited room for food and weapons. But now Frank has separate collections of slots for grenades, melee weapons, ranged weapons and healing items, each of which can be upgraded. By the end of Dead Rising 4 I had about eight slots for weapons and four for healing items, meaning I was carrying around a sleigh’s worth of murder toys at any given moment.

This has the side effect of making Dead Rising 4 the easiest of the series by far. The capricious save system seen in previous Dead Rising games is replaced by a generous checkpoint-and-autosave system here, but that didn’t really matter to me, because I never died in my 20-hour playthrough of the game. I’m OK at games like Dead Rising, but I’m not amazing, and by the end I was pretty surprised to have walked away from the game figuratively unscathed.

That change — the absence of real threat — makes Dead Rising 4 feel a lot different, even if it plays largely the same. And if scarcity and tension are what you were always coming to Dead Rising to experience, I think you’ll be disappointed.

However, this results in an open-world game almost entirely dedicated to screwing around, and causing as much carnage against dozens or hundreds of enemies at a time as possible. Without the risk of previous games, I got sidetracked annihilating zombies more often — just sort of spacing out behind the wheel of a pickup truck and seeing how high I could rack up the combo meter in the game. It was ... relaxing.

Throughout my time with Dead Rising 4, I never hit a showstopping bug that halted my progress in the game, but I did see some occasional weirdness. At one point a Maniac side mission wouldn’t complete, and character models occasionally got stuck on vehicles or other geometry. A number of reviewers at other sites also reported more serious issues with the game, including severe glitches and freezing in the final "case." I didn’t encounter the problem, but it warrants caution, and I’ll be checking forums and other venues to see if this is a persistent thing or a limited event. With that in mind, consider this review provisional until we can determine more about the launch state of the game.

It’s extremely weird to call a Dead Rising game relaxing, and there are a few moments where I thought I might almost get Frank killed, but they were rare. And this makes Dead Rising 4 feel more like an exploration playground than it has before. I didn’t really care if a weapon was effective if it was funny, for example. I also spent more time taking photos in Dead Rising 4 than I did when the mechanic was originally in place in Dead Rising, even though the material benefit is basically nonexistent, shy of some experience rewards.

But once again, I didn’t care. It was something I did because it was fun to do, and the in-game scoring was meaningless but oddly motivating. Dead Rising 4 is a collection of exactly this kind of stuff, and I found myself drawn in.

This is sometimes helped and sometimes not by the in-game story, which starts with a fairly interesting new conspiracy hook for the series’ fiction. Which the game just ... sort of drops after an hour or two, for something more predictable and less interesting. There are fewer friendships for Frank to navigate than Dead Rising 3 hero Nick Ramos had, but the relationship between Frank and his student Vick adds new depth to the protagonist.

For players who are more invested in Dead Rising’s survival roots, there is one potential lifeline in Dead Rising 4’s multiplayer component. While cooperative play is bizarrely omitted from the main game — despite some vehicles seeming specifically designed for it — the separate online mode places up to four players in a series of escalating scenarios with a more traditional inventory system and much less resilient characters. Survival there is far less assured, and you can run it alone, if you want to.

Our review of Dead Rising 4 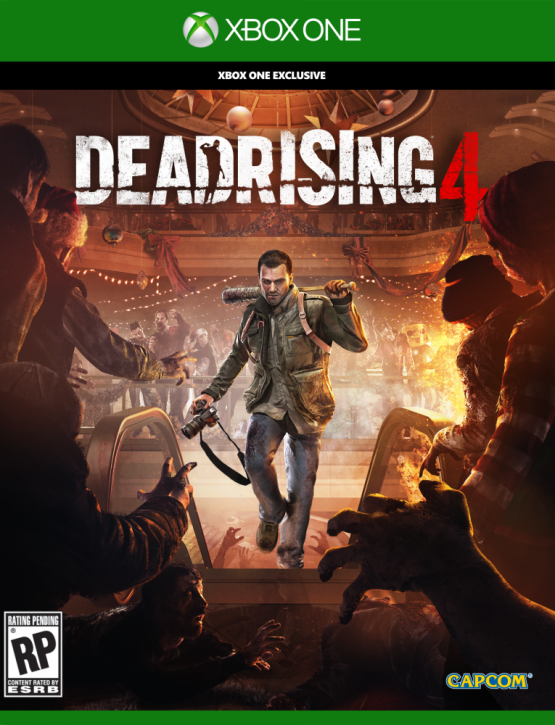 Dead Rising 4 has thousands of zombies to kill, with an omnipresent Christmas theme that’s bizarre, unifying and, strangely, soothing. Right now, as we all wind our way toward the end of a very confusing, often sad and traumatic year, I found myself enjoying the opportunity to get lost in it without having to think about it very much. Dead Rising 4 may not be smart, but I was never bored.

Dead Rising 4 was reviewed using a pre-release "retail" downloadable copy provided by Microsoft Studios, and was played on an Xbox One S console. You can find additional information about Polygon's ethics policy here.