Share All sharing options for: The Flash wraps up most of its loose ends in midseason finale

One week after the gigantic crossover event, we have a mid-season finale that needs to tie up a lot of loose ends and promise the viewers that it gets better. It's too much to do in a Christmas episode (of all things) and shockingly The Flash gets 85 percent of it done. Which is a relief after the season the show has been having.

We're returned to a post-alien invasion city that seems shockingly unchanged. Some people are buried under paperwork, but like, Arrival hasn't happened. (This is a reference to a movie you should've seen by now.) It's just another example of a city that seems annoyingly good at moving past extinction-level events.

We're also shown a flashback to four years ago, when Julian Albert was working as a dumb Indiana Jones rip-off in India and accidentally Necronomicon'd himself with a weird evil God. Finally, we know where Savitar comes from and it is stupid. Fine. There's a Philosopher's Stone and Doc Alc doesn't super remember any of the time he spends being an evil super-villain. Fine. We don't have time for this, because it is Christmas! 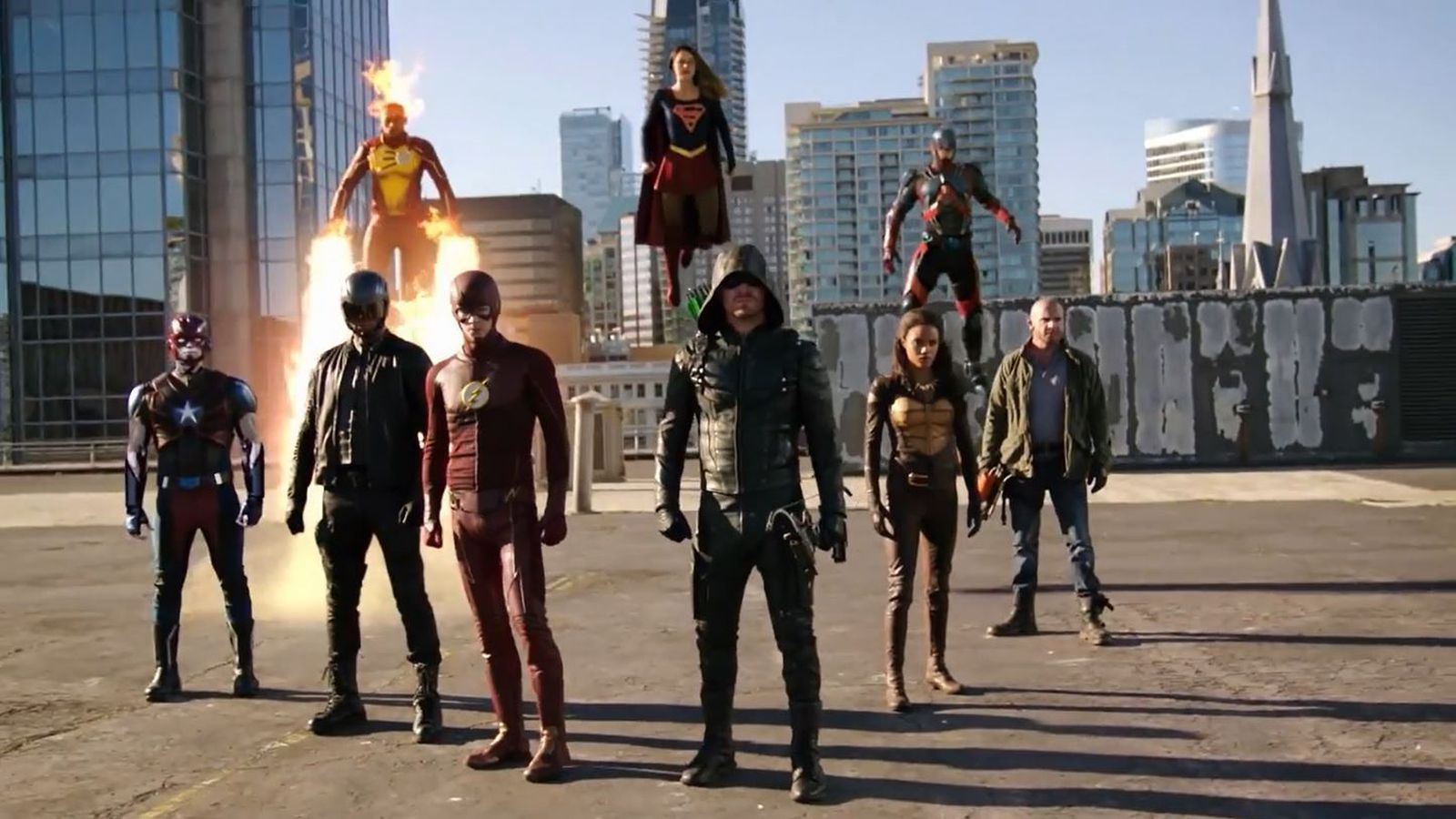 The crossover event is here!

Barry hops over to Earth 3 to grab Jay Garrick for some Savitar help. In the process he runs into Mark Hamill's Trickster trying to murder some folks. On Earth 3, the Trickster is a real Jared Leto Hot Topic nightmare version, played by the actor who has been our best Joker actor. This is the best joke that The Flash has ever done and no one appreciates it but me. I am alone in my delight and that is how I prefer it.

Garrick just happens to have all the background information on Savitar, who is The First Meta Speedster and ... then there is more talking but you already know this song and dance. Speedster doesn't like Flash because Flash is fast and wants to race/kill him. Neat. But simultaneously, HR is training said newly minted speedster Wally, who it turns out is already faster than Flash? Okay. Why aren't the weird speed gods from the future all trying to kill Kid Flash then?

Maybe Flashpoint shouldn’t have taken place over a single episode?

Anyway, HR warns Wally to not reveal his speed because "You do not trifle with the West household" — which should be the intro audio clip for Watch The Throne 2, should those nice boys ever become friends again. So yet again, we're hiding our strongest superhero on this show.

Following a battle with Doctor Alchemy and Savitar, Barry takes Julian Albert prisoner, and immediately reveals his secret identity, because Barry is bad at thoughts and ideas. The befuddled Albert, who had written a paper on Savitar that apparently didn't turn up on Google until today, agrees to help the team solve their Savitar problem by getting possessed by the angry speedster god. Science!

Cisco betrays the team when a magic box makes him think his brother is alive again, and then closes the box and saves everyone because Cisco is the only character on this show who is never overwhelmingly dumb for Plot Reasons. A few minutes later, they let Savitar into Julian's body so he can threaten everyone. Also, like most other Big Bads, it turns out he's mad at Barry for things future Barry has done.

Maybe Flashpoint shouldn’t have taken place over a single episode?

Look, it doesn't matter which time period of Barry you hate, I think we can just all agree that he’s not the best. This is the line of diplomacy that every episode should begin with.

Following an accidental trip into the future, Barry returns with the knowledge that the midseason finale of this season of The Flash involves Savitar stabbing Iris West through the heart — a thing that seems to happen to all the women in Barry's life. He isn't sure what to do with this information, so he doesn't really do anything. Probably the right call.

Then the episode just trails off into a delightful sequence of Christmas celebrations shared by the entire Team Flash and cleverly using powers and problems and love. The episode lets us just enjoy some time with these characters, do some delightful Christmas nonsense, and then ends without feeling the need to pile on extra threats or stakes. It's a perfect use of restraint in an episode that really needed it, and this mid-season point leaves us wanting more without having to breathlessly plow through more TV — which is a great call after the gigantic cross-over.

There's some changes to the team dynamic and maybe we can just be done with Julian now? Then everyone has a nice party and gets drunk. It's literally all I wanted from a Flash episode and it never got lost on its way to that target. Truly, a Christmas gift for all of us.