Stand down, Terror from the Deep. Sleep softly, Apocalypse. Requiescat in pace, Freedom Ridge. Your watch has ended. Firaxis, XCOM's newest steward, is here to relieve you.

XCOM 2 is bigger, stronger and more capable than XCOM: Enemy Unknown in every way. And in spite of a few lingering technical issues, it may be the best XCOM game ever made — and a fitting tribute to those that came before.

"XCOM's last remaining soldiers, scientists and engineers wage a guerrilla-style war without an end in sight."

XCOM 2 takes place after the first game's alien invasion and the governments of the world's attempts to stop it. 20 years later, humanity has fallen to the alien invasion, Earth's militaries are routed and the original XCOM project overrun. The aliens, who now call themselves Advent, have taken control of the planet's last remaining urban centers and remodeled them in their image. It is a police state, where order is ruthlessly maintained by heavily armed hybrid soldiers. Outside these futuristic urban centers mankind ekes by without running water, power or security of any kind.

What remains of the XCOM project has retreated inside of the hulk of an advanced alien UFO, constantly moving around the world to avoid detection. From this mobile base XCOM's last remaining soldiers, scientists and engineers wage a guerrilla-style war without an end in sight.

What XCOM 2's premise provides are opportunities to build characters, not the least of which is you — the Commander — who are dramatically welcomed into the narrative during the game's tutorial mission. There's Central Officer Bradford, your Jiminy Cricket from the original Firaxis game now hardened by 20 years of struggle. There's An-Yi Shen, the daughter of your head of engineering in the 2012 game as well as Dr. Richard Tygan, who spent years as a slave before escaping the aliens and joining XCOM. They all give evocative digital performances and provide the game with its heart.

Traditionally the meat of any XCOM title are the turn-based, isometric battles. As in Firaxis' first outing, in XCOM 2 they are fantasies about the kind of perfect, real-time information that allows remote commanders to order individual troops to pull their triggers from a comfortable distance. In practice players watch over their soldiers' shoulders, march them into the dark parts of the map, push back the fog of war to activate hidden aliens and put a bullet in their brains.

XCOM 2 features a peer-to-peer multiplayer mode, allowing for head-to-head battles between squads composed of mixed Advent and XCOM forces. Using a points-based system, players purchase units and then select the game type and the kind of terrain they'll fight on. It features public and private games, ranked matches and options for playing over a local area network.

Unfortunately, we weren't able to get enough experience with the mode before 2K's embargo lifted. We'll update this review with impressions of XCOM 2's multiplayer mode in the next few days.

In that way, XCOM 2 plays like every other game in the franchise that's come before. Except for the times when it doesn't.

Much of the time it's your troops that are hidden and lurking in the shadows, and it's the aliens who are drawing aggro from you.

XCOM 2 is about the art of the ambush. A clever concealment mechanic means that during many missions your soldiers will be able to sneak up on the enemy without alerting them. This one change breathes new life into the formula. Suddenly there were twice as many tactical options, and twice as many different kinds of missions as there were before.

Firaxis has also added mission objectives to the mix. In addition to simple extermination, most have a thematic timer counting down. Not a can of "meld" sitting in plain sight but a piece of intel rigged to explode, or an off-map assault craft closing in to shoot down your ride home. XCOM 2 has search and destroy missions, rescue missions, covert sabotage missions, asset retrieval missions and good old-fashioned heavily armed assaults.

The incredible scenario variety, and the procedurally generated maps themselves, gives the gameplay an organic, deliberate kind of pacing. The progression from offense to defense, from reconnaissance to assault kept my attention. As importantly, where other XCOM games were a slog from start to finish — lengthy bug hunts bracketed by total party kills — XCOM 2 uses its different mission types to create a narrative arc that simply hasn't existed in the series before.

The strategic layer of the game has also been completely overhauled. What was essentially a resource-optimization game, a race to unlock the next scientific advance, is now something on par with a finely tuned worker placement board game. You'll assign engineers to specific tasks by hand, carefully pushing your mobile base to its limits. The Avenger itself will need to go on errands here and there, all while avoiding detection. You'll travel to one corner of the world to launch a daring raid behind enemy lines, and the next moment you'll swoop in to defend a resistance cell at their hidden base.

It's as if the same kind of tension found in XCOM's tactical layer has finally trickled up to the strategic layer, and XCOM 2 is all the better for it.

When the administrative work is done and missions are unveiled, they're not rushing you from location to location to put out random fires. Instead, the game regularly feeds you goals and objectives that focus on supporting your civilian allies in the resistance and striking strategic blows against Advent military installations. It teases at plot points, it foreshadows climactic battles and provides solid feedback — in the form of in-game currency and loot, but also cinematic cutscenes — that make the effort worthwhile. In motion, XCOM 2 makes the original reboot from 2012 and its DLC expansion look amateurish by comparison.

Unfortunately, XCOM 2 suffers in overall fit and finish. For instance, placing grenades and rockets precisely where you want them will still devolve at times into a hunt for the perfect pixel. The game's bullet-time effects are gorgeous, except for the times when there's a wall in the way that completely obscures the action. More than a few times messages popped up over units without any text inside, and the game has a nasty habit of grinding to a standstill while the AI considers its next move, while someone fires a gun or merely takes a step forward.

The most irritating thing I discovered in XCOM 2 was the ghost of an annoying save game bug found in the Enemy Unknown. If you have too many save files it jumbles them up and gets their timestamps wrong. While I never lost a save as a result of the bug, it was challenging to find where I left off from day to day. The only solution was to selectively delete saves every so often to keep them at a minimum, but in this day and age that shouldn't be something I have to worry about. 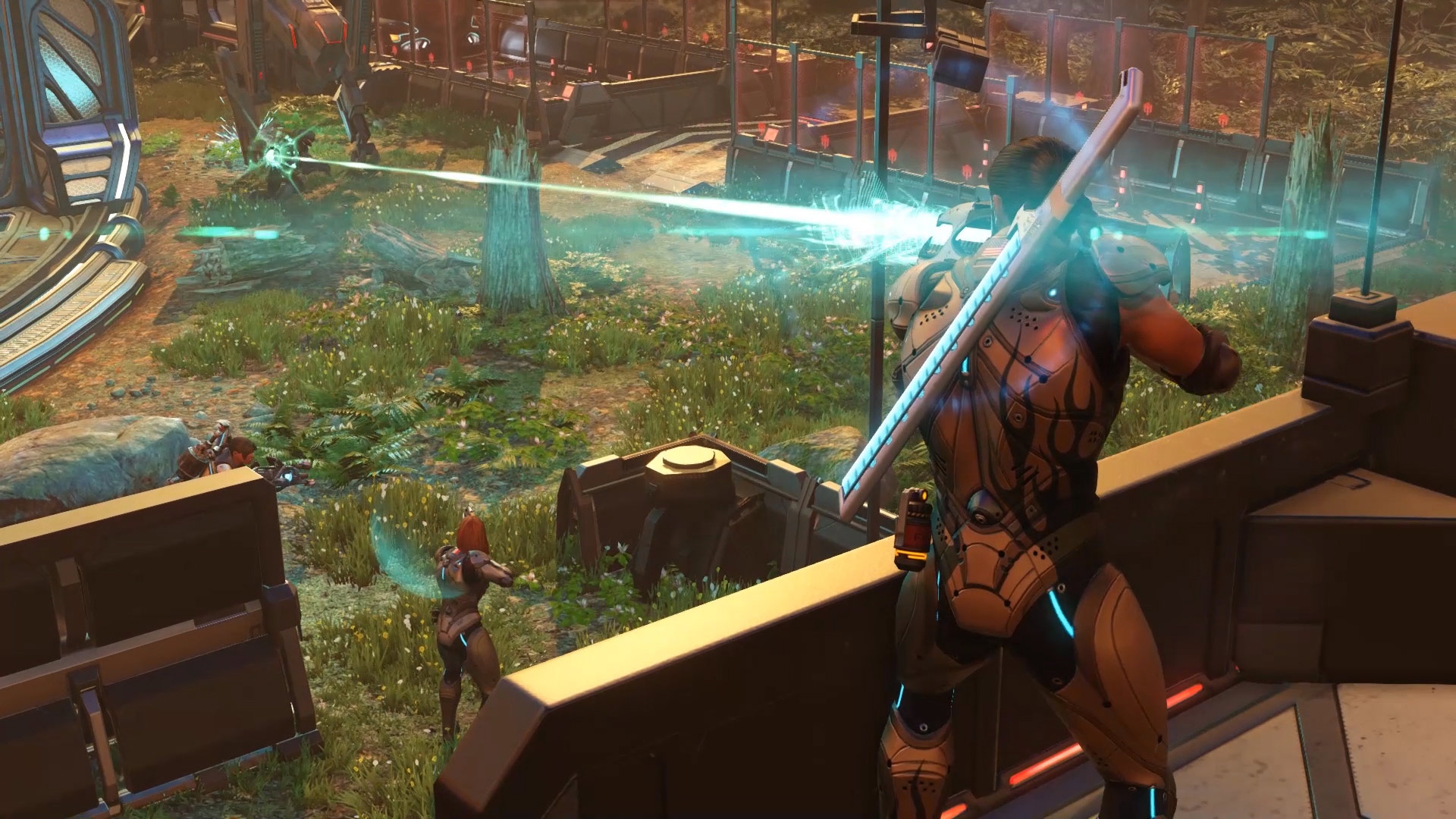 The environments in XCOM 2 are richly detailed and much more diverse than those found in Enemy Unknown. That's in part because they're procedurally generated to be different every single time. But they also benefit from an exceptional amount of set decoration. The spots I enjoyed the most were the ruined suburban spaces, because they told the story of what's happened to humanity over two decades of alien rule. Makeshift wood gas fuel cells power broken-down SUVs. Burned out buildings sulk below sunken roofs. Rain barrels huddle next to salvaged solar panels.

Every once in awhile I would catch a glimpse of tattered XCOM posters pinned to bedroom walls or a bit of inspirational graffiti. By keeping my Avenger flying I was giving the people of Earth hope for a better future, and the game world reflected it.

Despite a rough finish, XCOM 2 is the series at its best

In spite of a few glaring technical issues, XCOM 2 represents a high-water mark for the entire franchise. Firaxis successfully tells an evocative story. It treats players with respect and includes so many small quality of life improvements over the original they are simply too numerous to mention. It is challenging enough at its basic difficulty level to feel like a complete experience. Despite the bugs, it's still the best-looking, most exciting turn-based tactical game I've ever played.