Plants vs. Zombies: Garden Warfare 2 is a sequel to a game I didn't expect to like in the first place.

When it was announced back in 2013, the original Garden Warfare seemed like a monstrosity, taking the accessible, goofy charm of casual-friendly developer PopCap's overhead strategy game Plants vs. Zombies and shooter-ing it up. How crass, I thought. How unnecessary. But it turned out that PopCap was on to something, and what resulted married excellent mechanics with all of the bonkers design decisions of a real, honest-to-goodness Plants vs. Zombies game. It was even funny, and a rare example of a sophisticated shooter that didn't rely on graphic, bloody violence. It was also a game with surprising legs, racking up millions of users despite its complete focus on multiplayer.

Now, almost exactly two years later, the Plants and the Zombies are back in a game that aims to make up for some of the original Garden Warfare's limitations. In many respects, PopCap has gone the extra mile — and then some — to build something more than a budget experiment in mixing casual, cartoon aesthetics with a hardcore, team-based multiplayer shooter, but there are certain returning design issues that Garden Warfare 2 doesn't quite shake.

When it comes to controls, responsiveness, weapon handling and team mechanics, PopCap is not fucking around

Plants vs. Zombies: Garden Warfare 2's greater ambitions are obvious right away. Where Garden Warfare started at a basic menu, asking if you wanted to play the cooperative Garden Ops mode or competitive multiplayer, Garden Warfare 2 drops you into a war — or rather, a completely ridiculous demilitarized zone. Backyard Battleground is the container for everything in Garden Warfare 2, taking place in a town split into three parts: one section in the sunlight occupied by the Plants and their benefactor, Crazy Dave; one end controlled by Dr. Zomboss and the rest of his super-advanced Zombie army; and in the middle, a no-plants-or-zombies land where chaos rules.

It's a really bizarre conceit, but it works, adding a sense of narrative only hinted at in previous PvZ games. There's a context for just about everything happening in Garden Warfare 2, which is a nice change of pace from the bare-bones presentation of the original. But, more importantly, it adds a framework from which PopCap hangs a frankly ridiculous number of things to do. Each side's base contains missions, bounty boards, multiplayer portals and more, but the world at large is also full of its own secrets and hidden missions and challenges. You can also party up with friends and wander the world — which is called Zomburbia, because PopCap — and annihilate enemies wandering around before accepting missions or queuing into multiplayer together.

Everything you do in Garden Warfare 2 contributes to your overall character and player progression, no matter where you do it. Wayward zombies or plants are worth experience in Zomburbia as well as in the cooperative Garden Ops mode, and you can level up anywhere. It provides a level of persistence and involvement that very few shooters or action games manage, especially with a multiplayer component, and bigger, higher-profile titles have tried and failed to do what PopCap is pulling off.

There's so much stuff to do here that it's honestly a little intimidating. After about a dozen hours, I don't feel like I've chipped the surface of Zomburbia. I've unlocked almost no hidden areas, and haven't raised the Flag of Power — I'll let you find out what that is yourself — once in the final version of the game. There's almost too much to do, but this strikes me as a good problem. While Garden Warfare was a bit of a hit-or-miss value proposition hinging entirely on your desire to play with other people, you can kill plenty of time solo in Garden Warfare 2, in addition to playing every part of the game together as a group. It's one of the most seamless cooperative experiences I've ever played.

Then there's adversarial multiplayer, which has seen its own expansion. There three new classes on each side, bringing Plants and Zombies to seven each. Garden Warfare 2 brings back one of the original game's best features: the Welcome Mat playlist, which limits players to base classes on each side and also provides bonuses to struggling players to level the playing field a bit. Garden Warfare 2 also brings the same objective game types back, albeit with plenty of new quirks and maps that feel significantly larger than the last game.

It looks like a dumb, weird game full of mutant potted plants and non-threatening undead, but when it comes to controls, responsiveness, weapon handling and team mechanics, if you'll pardon my language, PopCap is not fucking around. There are no compromises made in deference to Garden Warfare 2's roots. It sits comfortably next to the Battlefield games as a great-playing shooter, thanks largely to its shared technical lineage with DICE's shooters.

The only real problem I have with Garden Warfare 2 was also present in Garden Warfare — the dichotomy of its asymmetric design. This is a long-winded way of saying that, well, playing as the brain-craving Zombies just isn't quite as fun as the Plants. Worse, it still feels like there are particular, vital areas where the Zombies just aren't as effective.

It's not that the Zombies are boring, exactly. In fact, PopCap has experimented the most with the undead, introducing the Imp class, whose tiny size and smaller health pool is complemented by a manic combat style and the ability to call down a powerful robotic suit reminiscent of 2014's Titanfall. The Zombies also receive a new melee-specific character called Super Brainz, to complement the giant zombie-eating counterparts on the other side of the conflict.

There's no shortage of inventiveness or goofy charm, and in a vacuum, every character has their own quirks and caveats that make them feel surprisingly distinct, given that there are 14 base classes. There are also around a hundred more variant classes, some of which radically change the basic abilities of the root character — my favorite being the Plant's Vampire Sunflower, which reduces the Plant medic's base health pool but gives it a life-stealing attack to compensate. 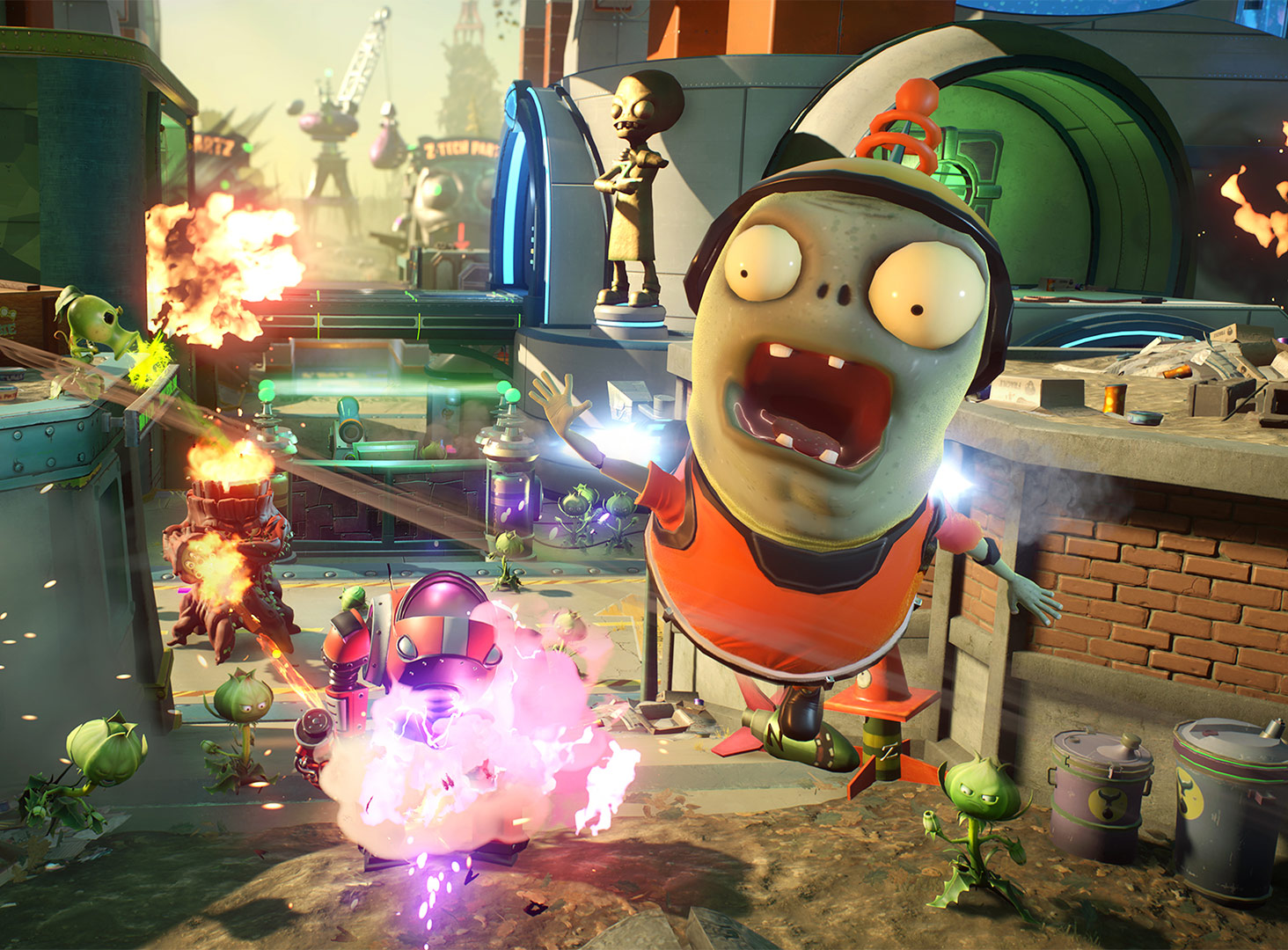 Like Garden Warfare, Garden Warfare 2 features a leveling system similar to many other shooters in addition to ... well, stickers. Like, '90s Trapper Keeper-style stickers, which you collect in order to unlock new character variants. Stickers can also be used to summon potted plants or low-level zombie underlings in Zomburbia or in competitive multiplayer. You buy stickers in packs using coins earned by finishing quests and killing certain more powerful zombies, but playing multiplayer matches is the fastest possible means of acquisition. Stickers come in packs, and the best stuff is most likely to be found in the most expensive packs.

If this sounds like it's geared toward an aggressive monetization scheme based on in-app purchases, I understand. While Garden Warfare 2 is generous with the coins — especially if you've played Garden Warfare, as Garden Warfare 2 gives lots of bonus goodies to returning players — the system is there to sell coins if EA were to flip a switch, just like it was in Garden Warfare.

Here's the thing: That never happened in Garden Warfare. In fact, there was never any for-pay downloadable content for Garden Warfare at all, though EA released several free additional maps. I can't say if lightning will strike twice, but PopCap's track record with the series is currently pretty good.

I found myself racking up kills and heals as the Vampire Sunflower, enough that it sometimes just didn't seem fair, and that's the problem. The Zombie healer, the Scientist, along with every variant I've tried so far, is nowhere near as useful. From a healing perspective, the Sunflower has a heal beam and can drop a potted sunflower that throws out healing balls of sunlight, which allows it to heal itself as well as providing additional healing to plant teammates. The Scientist's first two healing options — I have yet to unlock another — are either a healing sprinkler or a version of the Sunflower's beam (which the game cheekily acknowledges). The sprinkler can heal any zombie that sits within its area of effect, including the scientist himself, but it suffers from a long cooldown period. Meanwhile, the Zombie healing beam is always available, but seems to heal much more slowly than its Plant counterpart.

It's not that the Zombies aren't fun to use. There's plenty of variety and their brute-force approach can be deeply satisfying. But I felt like I was often running uphill in comparison to my games on the other side. And for whatever reason, during my review sessions for Garden Warfare 2, my time spent undead was often accompanied by strange lopsided matches where the foliage severely outnumbered us player-wise. I was annoyed that the game didn't do something, anything to balance matches like this — I played through the general matchmaking system with a retail Xbox One copy of the game. But I also wondered more than once if some players were just switching sides whenever they ended up playing as a Zombie.

If there's a saving grace here, it's that Garden Warfare 2 works to take the sting out of losing. There's a podium recognizing particularly effective players at the end of each match, and it acknowledges success regardless of the winning team. There's also a medal system in each game that goes out of its way to let you know when you did the most of a particular thing, and the progression rewards are generous as well, win or lose.

If Garden Warfare was an attempt to make a multiplayer-only shooter that just about anyone could enjoy, Garden Warfare 2 takes that a step further by removing the original's budget-priced compromises. Making the original PopCap concept into a shooter isn't novel anymore, and I hope that the developers pay attention to the game's potential balance challenges over time to make sure that "asymmetric" doesn't become "lopsided." But Garden Warfare 2 stands strong on its own, and with friends.

Plants vs. Zombies: Garden Warfare 2 was reviewed using final, retail Xbox One download codes provided by EA, involving time spent in multiplayer sessions on retail servers arranged by EA. Time spent with Garden Warfare 2 at an advance event in December was also considered. You can find additional information about Polygon's ethics policy here. Note: this review originally stated that there were two new classes per side. There are three. It also referred to the overworld as Backyard Ops. The mode is called Backyard Battleground.