For all the ways in which it's undeniably familiar, Superhot is quite unlike anything else I've played.

Some of its uniqueness is owed to its strange path to release. Superhot was birthed from a game jam — the 7 Day FPS challenge, in which developers created a first-person shooter in a week. The short project proved so popular that the team took it to Kickstarter, hoping to expand it into a full game. While its original concept drew plenty of crowdfunding support, I wondered then if the small development team could successfully expand on the original short tech demo.

Rechristened as "Superhot Team," it turns out it could, and did. Superhot is packed full of big ideas, but it also demonstrates a tremendous amount of restraint. That smart eye for holding back elevates the game above a simple one-hit wonder.

Told through a slick meta-interface that looks like what would have happened if DOS evolved as the primary input mechanism for computing, Superhot provides a minimal but intriguing plot. The main character is told about and then sent a cracked version of an exciting new game. That game is Superhot, which you then get to play.

I won't spoil where Superhot goes from there, but I will say that it toys with themes of control and freedom within games. It's well-trod ground; however, this story is covered in a cyberpunk sheen that prevents it from feeling like a total rehash of plots I've played through time and time again.

Superhot deserves special praise for its inventive visual language. The world is a stark, non-detailed white and gray; enemies and their bullet trails are bright red; guns and other items that can be picked up and wielded as weapons are a metallic blue. What may initially seem like a stylistic choice to make the game stand out or feel artsy reveals itself as a brilliant means of communicating everything the player needs to know when they enter a new level, without the need for long tutorials or text tips or even spoken dialogue.

The plot is also helped along considerably by Superhot's gameplay conceit, which drew so much praise from the original demo. Superhot is a first-person shooter, but time in the game crawls forward. Each second is stretched out, giving you freedom to think about your next move carefully — right up until the exact moments when you move or act, at which point things speed up until you're no longer moving. In between those movements, you can dodge bullets, carefully position yourself and determine perfect lines through each level to maximize your killing potential.

I struggled to wrap my head around this for the first level or two, but things clicked into place soon after. Superhot felt great once I developed a sense of how to approach situations in the game. Since a single bullet or punch from an enemy kills your character, I died a lot in my playthrough. But the levels are so short, and getting a run right is so satisfying, that I don't recall a single moment of frustration.

Had I been momentarily annoyed, Superhot finds a strong means of distraction in the way it constantly switches things up in each of its 30-some levels. Some start you with a pistol, some with a katana, some in an elevator full of bad guys with guns pointed at your head and all you have is your fists. Each situation is special, and they only get more wild as the game progresses and slowly unwraps a handful of surprising new abilities. 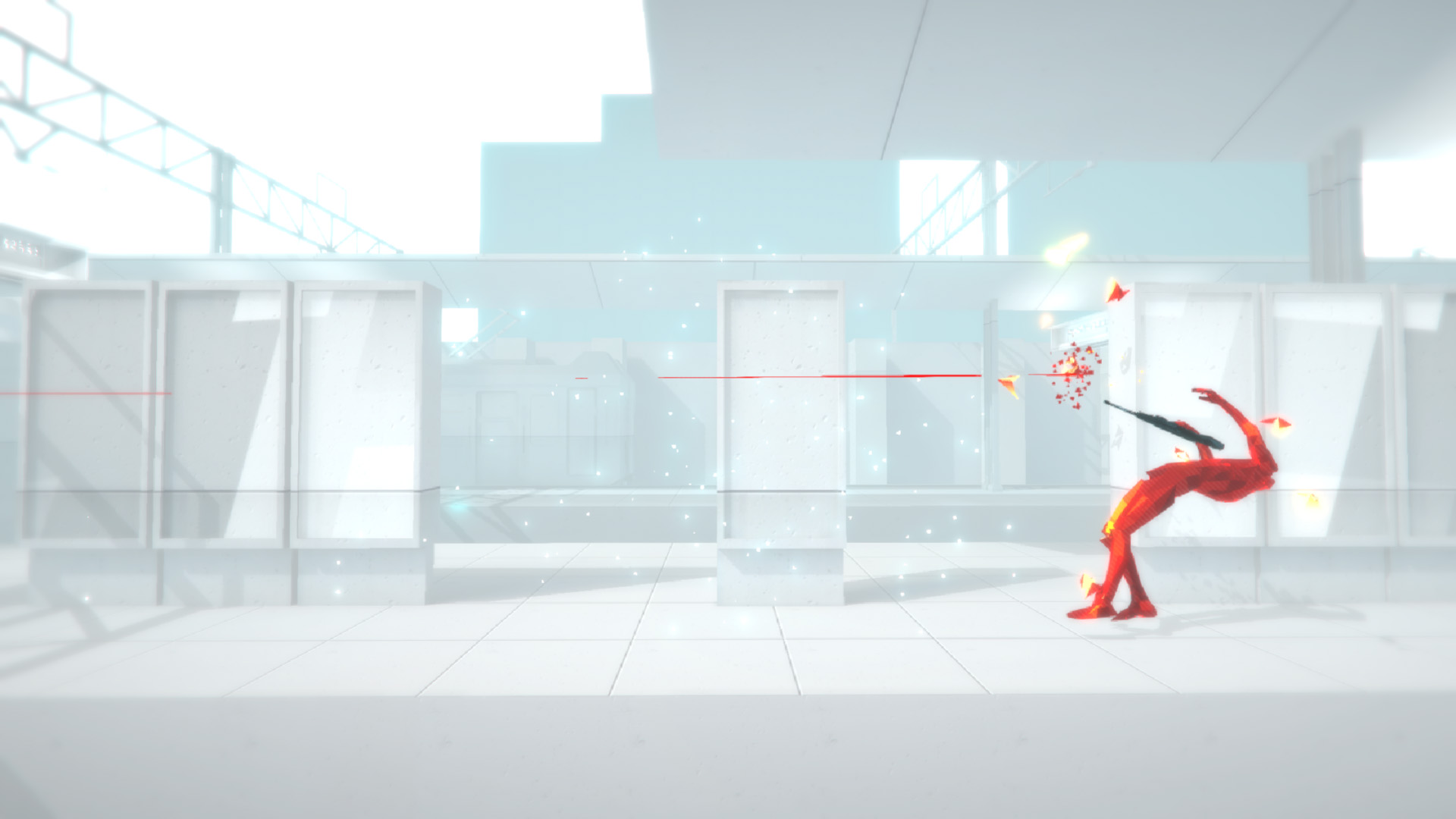 Not sure if Superhot is a game you're interested in? While the original version of the game from the 7 Day FPS game jam differs from the final release in many ways, it still presents a good taste of the tone of the game, not to mention a chance to mess around with its strange time-bending mechanics.

The original prototype is still playable for free in your browser on the Superhot website. Note that you'll need to run it in Internet Explorer, Firefox or Opera for it to work.

When the credits finally rolled on Superhot, what I felt most keenly was appreciation for the game's incredible discipline. It lacks bloat to a degree that's nearly unheard of in modern gaming, at least outside of more outrightly narrative-centric, gameplay-light titles. Superhot only took me two or three hours to finish, but that's not due to it being light on content. Rather, it demonstrates a wonderful sense of moderation, of giving the player precisely as much as is needed for a great, satisfying experience. It never feels the need to repeat itself, whether to drive a point home or just to increase the total playtime.

Notably, Superhot also recognizes how fun its core concept is and, upon completion, unlocks a few bonus modes that allow for more experimentation. Challenge mode lets you play through the core campaign's levels with some fun new restrictions, and endless mode (featured in the video at the top of this review) lets you chase for the highest number of kills possible in arenas with endlessly respawning enemies. They're simple enough but a fun way of extending the enjoyment of the core Superhot experience without getting in the way of the brisk main campaign.

From its looks to its clever-but-one-note concept, Superhot screamed style over substance the first time I saw it. In its final iteration, though, it perfectly blends style and substance. Its appearance is original, memorable and loud, but its ego never overtakes the bold design principles at the heart of the game.