This is how you make an NES cartridge in 2016

Inside the Kickstarter campaign to make hundreds of carts by hand

Share All sharing options for: This is how you make an NES cartridge in 2016

New York-based electrical engineer Andrew Reitano is sitting on a hot hand, so he's decided to go for broke. Just a few days ago he launched a project on Kickstarter to bring his game Super Russian Roulette to life as a real product for the now 33-year old Nintendo Entertainment System.

I immediately had two questions. How, in this day and age, does one go about manufacturing NES carts for fun and profit? And how did competitive suicide end up getting turned into a fun party game?

A long day at the factory

Reitano says the story began a few years back when he cobbled together a reprogrammable NES cartridge. Instead of having to make a custom-built board for every single game like the original NES carts, Reitano came up with a universal device that fits inside a standard cartridge shell.

So far, his campaign has raised over $30,000. That means he's on the hook to produce more than 400 Super Russian Roulette carts by November.

And, even though he's developed that universal board, Reitano says that most of the work will still need to be done by hand.

"I've actually been working on refining the process over the past few years," Reitano said in an email. "A bulk of the cartridges were made for a friend's game called Star Versus. In that time I was able to train up two tireless technicians who got making them down to a science by board 300. Right now I have a garage that is basically set up with workspaces for production of these boards.

"The typical process for me is to design and order a prototype printed circuit board domestically, prove out the circuit, then order a large quantity of blank PCBs overseas. The PCBs for the NES are an uncommon thickness and I pay a little extra for electroless nickel immersion gold (ENIG) to prevent corrosion on the edge connector."

Reitano said he can get the rest of the parts, like integrated circuits and capacitors and whatnot, from online distributors. Then they're soldered into place using a template. The paste-like material is squeegeed through the template, onto the board and the various components are placed by hand using tweezers.

Then, he puts a batch of boards into a toaster oven for just long enough for the solder to melt into all the right places.

From there, the whole thing gets glued into a custom-made NES case fabricated by Paul Malloy and shipped off to backers.

"It's exhausting," he said, "but really rewarding to see the project through from software to hardware to product."

A crazy game of poker

Aside from the Power Glove, the Zapper light gun is probably the most recognizable peripheral for the classic NES console and Reitano says it was always a goal of his to build a game around it.

In Super Russian Roulette players, and their television, sit gathered around a table taking turns pulling the trigger with the light gun pressed to their heads. An animated cowboy keeps the action moving, taunting players as the tension builds. 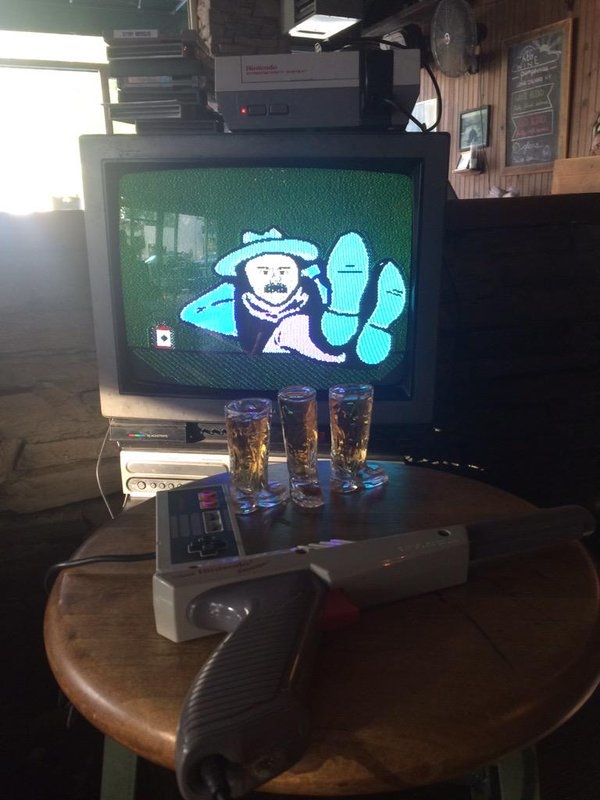 It's a bit of a departure from the family-friendly fare found in many Nintendo games. That's part of the gag, and one of the reasons the game won the Audience Choice Award at last year's Fantastic Arcade in Austin, Texas.

"The game was always centered around the idea of a high-risk game of chance that could only take place in the excessive machismo of a spaghetti western saloon," Reitano said. "It’s a virtual representation of an extreme thrill-seekers parlor game."

But tongue-in-cheek as it might be, it's still a game about players shooting themselves in the head. And, unlike the Persona series, the in-fiction result is player death.

"The game is meant to use the Zapper in a bizarre, subversive way, but new players at the table bond under the weirdness of having the gun they grew up with pointed the other direction for the first time. SRR is about beating the odds and cheating death with friends. Death is a consequence, and a cartoonish one in the context of playing. It’s not the goal.

"I never intended to associate the game with the real life horror and desperation of taking one's own life. It’s a dark game of chance, but it’s never played alone and always played voluntarily. I would never want to upset anyone."

Reitano's campaign, which has already met its goal, runs through March 22.