Firewatch is a story of a lonely man in a big country, presented as a series of prettily frescoed spaces, strung together for the player to explore in exacting chronology.

The player strolls along narrative paths in the first person, gazing at passing tableaux of gorgeous nature, while investigating a mystery parceled out in discrete, bite-sized chapters of the authors' devising.

Inside its confining corridors of cottonwoods and aspens, boulders and ravines, Firewatch delivers a deft story about loneliness and paranoia in a world of deceptively far horizons and dreamy vistas. It's a pace-y series of scripted scenes that amount to a graceful and entirely beguiling illusion of agency.

The story remains gripping for almost the entirety of its five hours. It's only in the final sequence that the illusion begins to blur and disintegrate as the drama's converging arcs fail to entirely yoke together.

Firewatch delivers a deft story about loneliness and paranoia

Set in the rugged outdoors of Wyoming, Firewatch is a game of exploration, both in the physical sense and intellectual sense. It's the story of Henry, who takes a job on a forest watch station in the late 1980s. Via a walkie-talkie, he communicates with his supervisor Delilah, who literally oversees him from her distant mountaintop destination.

As Henry, the player's job is to follow Delilah's instructions. She sends him out to investigate a column of smoke, or some kids letting off fireworks. He hikes. He jumps over felled trees. He climbs rocky inclines. He picks up stuff. On those very rare occasions when he encounters other people, he follows limited dialogue options. Mostly, he reports what he finds back to Delilah, via more complex dialogue trees.

In the course of these quests, Henry finds himself encountering unwelcome conflicts that propel the tasks beyond mere fetch chores into the realm of engrossing missions. He and Delilah come to believe they are being monitored. People go missing. It's possible that Henry is being set up for committing a serious crime.

Firewatch presents us with the illusion of a wide-open world, but the game takes place entirely within the confines of paths and occasional clearings. The player can wander along these at will, but their true function is to lead the player from one chapter of this story to the next, creating an ever-expanding roster of destinations, many of which are only ever used once.

As a challenge, Firewatch asks nothing especially demanding of the player, while always offering plenty of stuff to do. Traversal usually takes some measure of puzzle-solving, reading a map, consulting a compass and exploring the environment for hidden exits. There are plenty of physical barriers, such as rocks to climb, ensuring that the player is constantly engaged and feels like progression is more than a conveyor belt.

There's also stuff for the player to use, either on cue or by fancy, such as an axe, a flashlight and a camera. These are objects that must be sought and found.

It all adds up to a game that offers few tough challenges, but many moments of intense concentration. There is one moment, near the end, when the game lets go of the player's hand, and asks perhaps a tiny bit too much lateral thinking and intense exploration, a sharp upward curve in difficulty.

Firewatch brings to mind first-person storytelling vehicles like 2013's Gone Home. But instead of a series of rooms within a mansion, we traverse various outdoor destinations within a map. While Gone Home told its story through the use of props, Firewatch spins its yarn around dialogue between Henry and Delilah.

Firewatch asks nothing especially demanding of the player 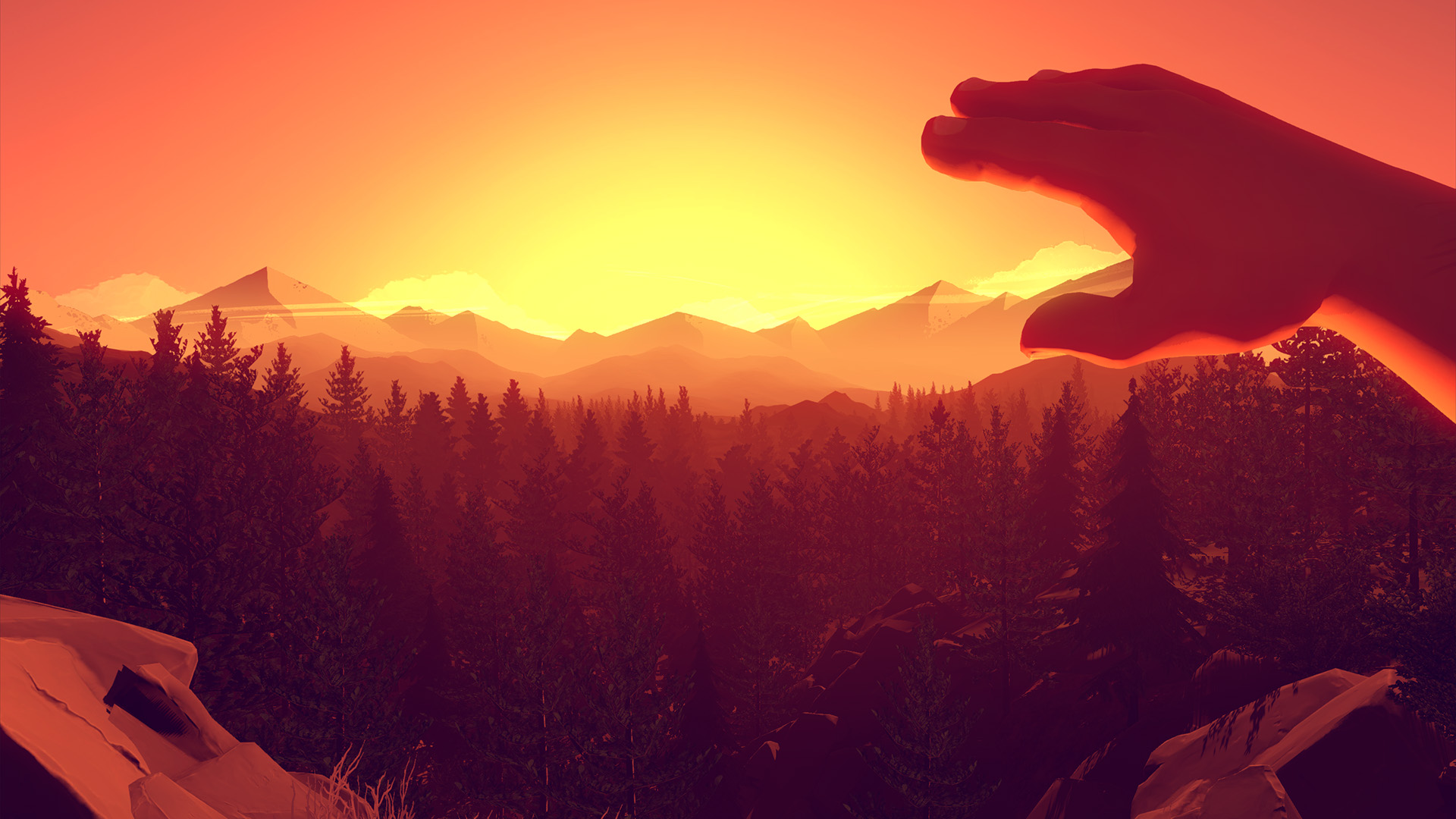 On the whole, Firewatch's missions serve the story, not the other way around. Its cascading quests are obviously designed to open up the map and unlock new gadgets, but there is usually a sense that they are intimately entwined with the unfolding drama. Game designers have spent years trying to splice together the starkly different materials of player agency and authorial story. Firewatch mostly succeeds in convincing the player that they are one and the same.

Cleverly, developer Campo Santo makes sure the player is heavily invested in Henry's character and personality right from the start of the game, demanding a few personal choices on his behalf that transform him from ordinary everyman into someone special.

Many games ask that you personalize by choosing a hair color or shoe size. But Firewatch requests that you choose a pet and name it, or that you pick from optional ways to interact with Henry's unwell wife during the early backstory. These mini-choices demonstrate a sense of humor, while creating empathy. Firewatch is a subtle story told with economy and verve.

Delilah is the central enigma. She's smart and conscientious, but she makes mistakes. She likes to drink and to flirt. Sometimes she is self-centered, but she can present as caring. She has moments when she shows a need for companionship, and others when she is wary and aloof. From the start, she seems likable, but not entirely trustworthy.

She is, of course, a device to give quests and to make sure the player is paying attention to important narrative events. But she is also is the central storyteller, revealing secrets about herself while teasing depth and contrast out of Henry's character.

Delilah and Henry represent an emerging trend in games, of paired characters who are individually and collectively simpatico but who struggle with their own anxieties and with one another's perceived shortcomings. Their relationship has form and shape, though it shimmers and shifts as the story progresses.

These two characters are written with a conviction and authenticity rarely seen in video games. Neither of them is idealized, not even for a second. Their self-doubts and flaws are carved into the script and into the optional responses. Their ordinariness is what makes them so appealing.

All good mystery novels play tricks on their readers, offering up red herrings and plot feints. Firewatch does this too, embedding its riddles within dialogue and environment. The player is always in a disturbed state, and so in that regard, the game succeeds.

Delilah and Henry are written with conviction and authenticity

Some of those red herrings are likely to be the subject of post-release thinkpieces, seeking answers that are not satisfactorily explained in the denouement. But this review is not the place to investigate the difference between smart misdirection and ideas that seem like broken narrative threads. It's enough to say that Firewatch is a game that people will want to argue about.

But the story is more than just a tale of backwater seclusion in the 1980s. It's also about us and the world we inhabit today. Henry and Delilah are freaked out by the possibility that their relatively harmless banter might be the focus of a third party's interest. For them, the notion of being monitored is extremely creepy. 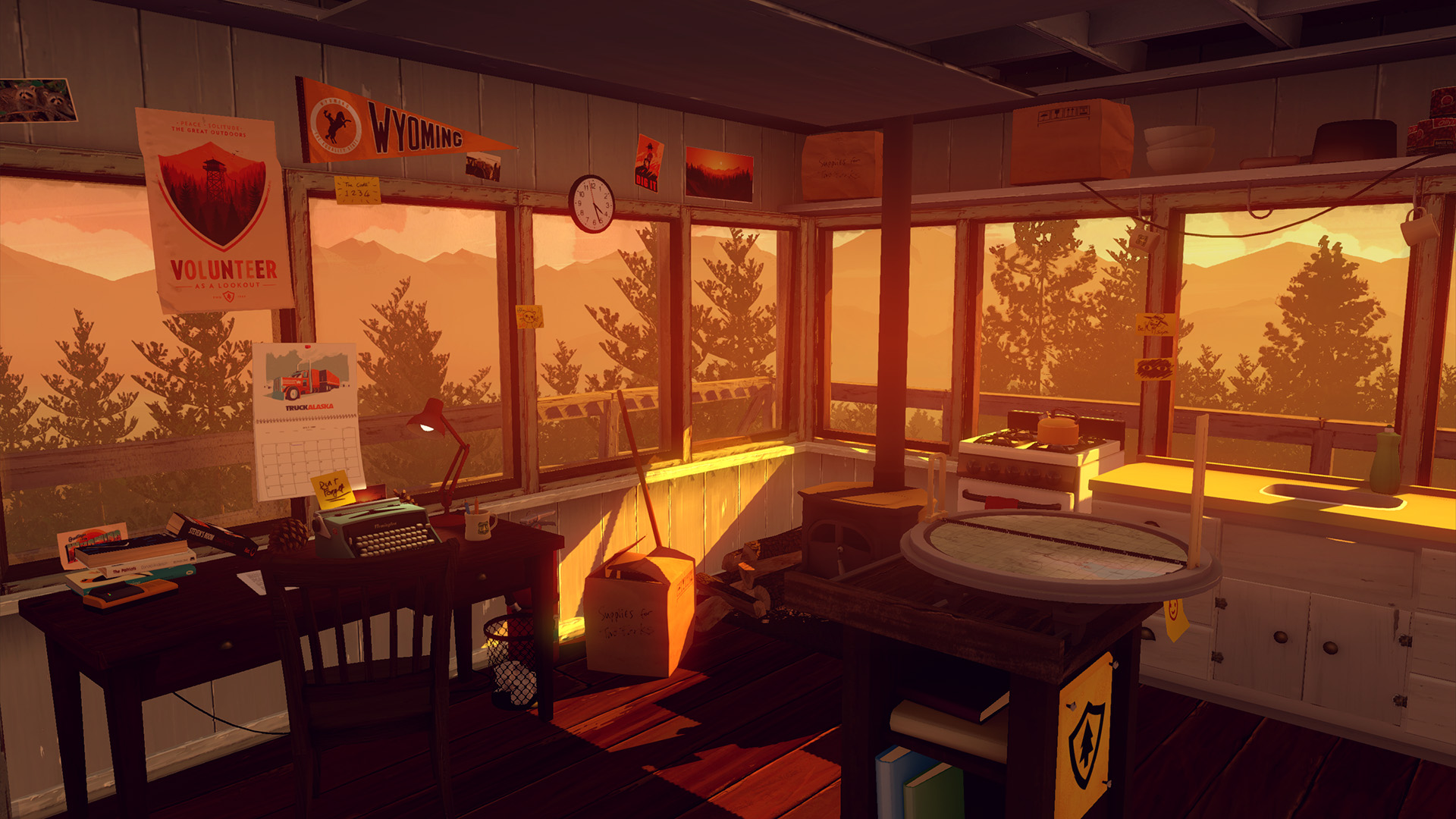 Firewatch takes us to a time and a place in which people expected that they might be left alone. It reminds us that invasion of privacy is a stark and frightening violation, even when we leave ourselves open to such abuse.

Campo Santo has crafted an elegant and satisfying story that demands the player's avid attention. It's a compelling tale that forms the gratifying shape of more traditional narrative, right up to a late-game point when it starts to fall apart, failing to live up to its earlier promise. The last 20 percent of this game is likely to attract a good deal of debate and disagreement. A sense of an unpeeling, a gentle deterioration in the concoction, occurs toward the end, when the various strands of the story are being tightened toward resolution, not entirely successfully.

Firewatch is the video game equivalent of a page-turner

Even so, these slightly off-key resolutions do not ruin what is otherwise an entertaining and original experience. If there can be such a thing as a page-turner in video games, this is one. For anyone who enjoys narratives within games, Firewatch is certainly worth playing. Player agency is woven into the game's characters and plot, unmasking mysteries as they curve toward their conclusion. In the end, it feels like it's about the emotions and cares of real people, not the animations of puppets.