Shadwen is an unapologetic stealth mashup that shouldn't be so cool

Share All sharing options for: Shadwen is an unapologetic stealth mashup that shouldn't be so cool

The first game that gobsmacked me as an adult was Metal Gear Solid, because it turned the basic idea of video games — confront and kill every enemy — on its head.

It's a rare occurrence, that tectonic shift in worldview. Still, every once in a great while, a game comes along that forces you to rethink assumptions that had been obvious moments ago. Metal Gear Solid was that game for me.

But here's the thing: That's no problem at all. Shadwen's discordant mix of borrowed mechanics hails from some of the best and most innovative games in recent memory. Despite my hunch that this should work about as well as mixing orange juice and toothpaste, Frozenbyte has created something really intriguing — something that, despite itself, feels new.

GAMES WITHIN A GAME

The beginning of Shadwen follows two women — a ruthless assassin and a frightened little girl — through the underbelly and streets of a Victorian-era city.

You play as the woman, leaping, grabbing, stabbing or using your ever-present rope to murder or subdue the royal guards spread across the city like a virus. Then you hide their bodies in foliage, behind walls or maybe in haystacks. Get spotted, and it's an instant game over. Murder, and the child, Lilly, will judge you. Succeed in your clandestine mission, clear the streets, and Lily will follow you, whether she likes you or not.

If this sounds something like Assassin's Creed or Dishonored or Thief or BioShock Infinite, then you're picturing the right games.

The setting, the constant companion, the narrative split at the heart of every decision are all appropriations, but Shadwen isn't done. 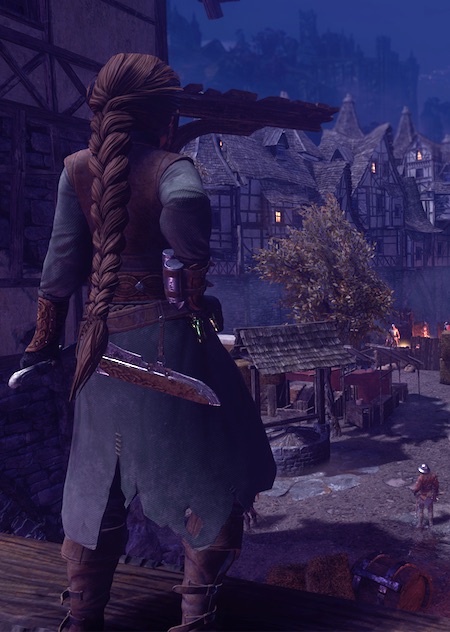 First, time's passage is almost entirely dependent on your movement. Stand in one place, and the game world freezes around you like a diorama. Though you can press a button to make time move forward without your bodily movement, that's that aberration, not the norm.

In Shadwen, the normal course of events is more like ascending a Victorian house with a rope, leaping into the air over a courtyard, pausing time, whipping your rope at a wooden support beam while in suspended animation, swinging like Tarzan until you let go, and landing on top of your enemy as you bury your dagger in his neck. Then the whole world pauses again as you swing the camera around, looking for a place to hide the evidence.

If this sounds like Superhot, go to the head of the class.

Shadwen's next big departure is the real game-changer: You have a built-in ability to control time in reverse. At the press of a button, you can rewind time. Say a trap you laid didn't work out. Say a move you made aroused suspicion. Say your rope didn't connect with the beam, and you leapt to your death from your perch high atop the city streets. No problem. Rewind for up to two minutes and try again.

If this sounds like Prince of Persia: The Sands of Time or Super Meat Boy, give yourself a gold star.

Think of the possibilities, my fellow stealth game dorks! We dream of the perfect unseen route through a level, where everything goes according to plan and our enemies fall only vaguely aware that something went wrong. But before that can happen, there's almost always a pause, a reload, a journey back to a checkpoint. We try again and again until we get it right. Shadwen renders checkpoints obsolete. And it doesn't just make experimentation possible. It encourages it by mitigating the risk of failure.

So, no, Shadwen is not original. In fact, you might say that it's deliberately unoriginal. But that's precisely what makes it so interesting.

By mixing and matching so many ideas — as small as haystacks and as large as Victorian landscapes — from so many other games, it creates something unique. It creates the video game equipment of a mashup.

Shadwen wears its influences on its heroine's threadbare sleeves, but a patchwork quilt can keep you warm just as well as one made of whole cloth. 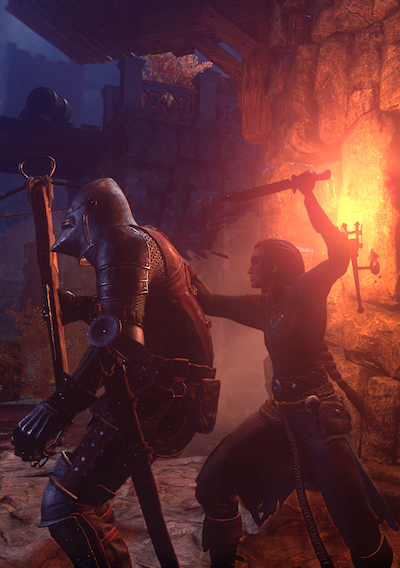 At first — and, sure, maybe second or third glance — this could be mistaken for something silly. I'd seen all of what Shadwen has to offer before, elsewhere, sometimes in wholly unrelated games. That seemed strange at first, but as I saw and played it at GDC 2016, I couldn't deny that it congealed into something I couldn't dismiss.

Then again, I wasn't any good at the game when I played it. I saw possibilities, but I couldn't execute on them, so I asked a developer to play for me. He was happy to oblige.

I watched as a spiked bomb attached to a steampunk decoy ball with a rat inside of it rolled across the street and tweaked an armed guard. It exploded, and the force sent a gigantic wooden box directly at the heroine's face, killing her along along with her target.

A second or two and a button press later, she was back in the action, trying again to get the perfect kill.

This is weird. But it might just be the kind of weird that I could really get into when Shadwen launches for Linux, Mac and Windows PC sometime in the next few months.

By the end of my time with the game, I was still thinking of Metal Gear, but from a different perspective. Shadwen most closely resembles Metal Gear Solid 4: Guns of the Patriots, which borrowed from its predecessors and contemporaries to create a game that was at once familiar and new. You could play it in third-person or first-person modes. You could control the distance from you and the camera. You could make it feel like Halo or Gears of War or Uncharted. There, as in Shadwen, it's your sandbox, and you can build whatever castle you like.

GDC 2016: All the news from game development's biggest gathering