It could use more zazz

It was the summer of 2014, and after many years and many iterations, Bungie was only a few months away from shipping Destiny.

At that point, David Candland had been at the studio for more than a decade, working on titles as far back as the original Halo: Combat Evolved before it was an Xbox game. By summer 2014, he was UI design lead on Destiny, responsible for defining the look and feel of the user interface, where players would interact with the game set to define Bungie's next, post-Halo act. 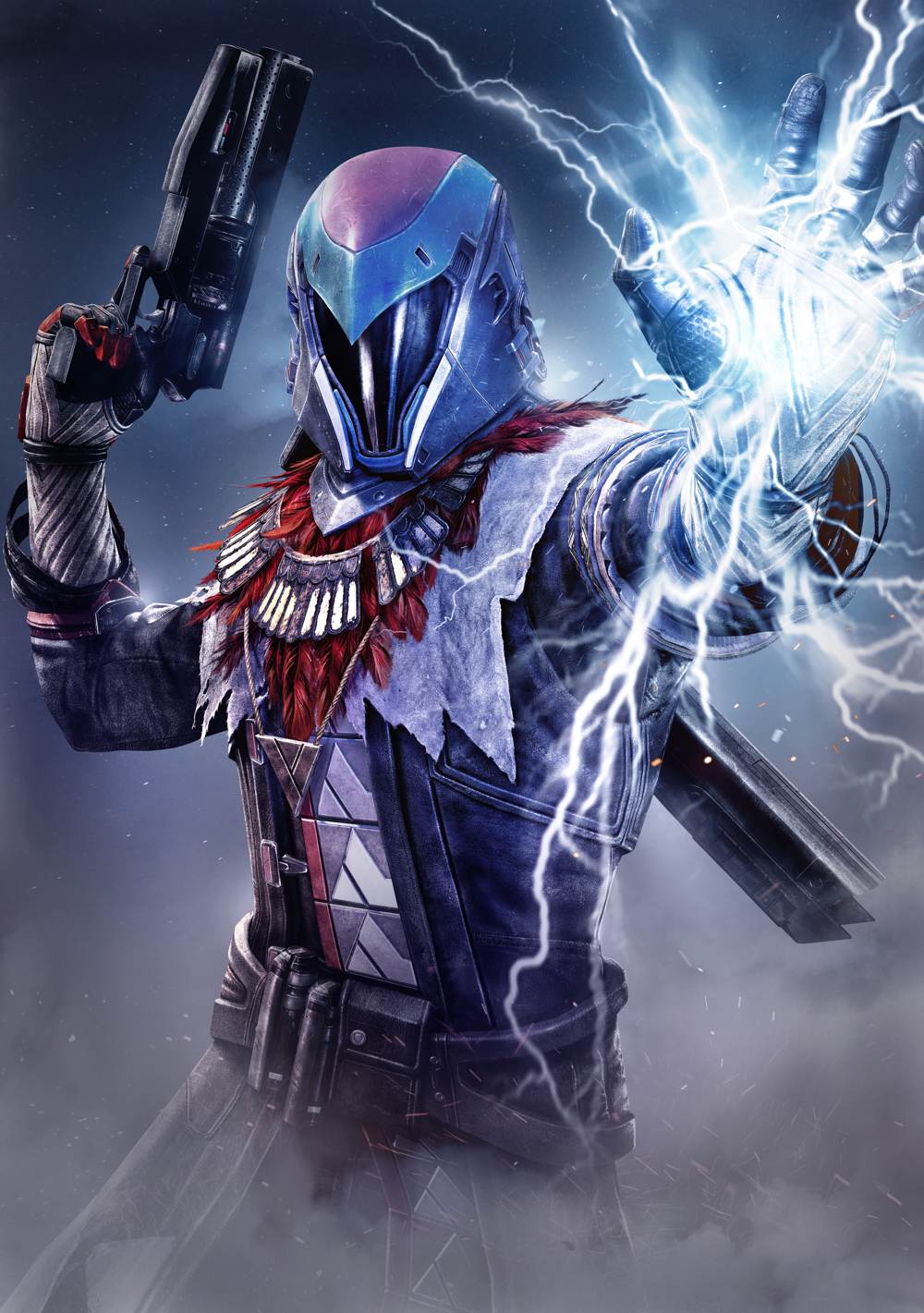 Candland and his team had been tinkering, prototyping, designing and redesigning Destiny's user interface for years. The mission-critical component of the game needed to communicate information — in words and in symbols — as well as empower players to access information and change their game not only at will, but easily.

A few months away from Destiny's release date, the UI team believed it had the best incarnation yet, honed from years of theories, experiments and testing, successes and failures. "Sometimes, it becomes a learning opportunity," Candland recently said of the latter. Those learning opportunities congealed into a slick, minimalist interface designed around a paradigm more closely associated with PCs than gaming consoles. In short, Destiny's UI behaved well.

There was only one problem: It was also more or less a lifeless bore.

Bungie co-founder Jason Jones knew it, and he sent the UI team in a new direction when there was little time to spare.

At a GDC 2016 talk this week, Candland chronicled the UI team's experimental design over several years, telling the story of its evolution and the improbable tale of how swaths of the interface Destiny players have known since the day the game launched didn't exist until the game was nearly on store shelves.

SPREADSHEET MENUS AND THE FREE CURSOR

Destiny was released to somewhat less than universal acclaim. Those critiques tended to center on the game's progression system and lack of content, not its bold and innovative UI.

Like Halo before it, Destiny is a first-person shooter. Yet when you think about an FPS, you probably don't think of the UI, even though it's a huge part of the game.

Destiny is a sprawling, connected FPS, and its helmet-cam combat is only one part of the overall experience. Of course, it's an enormous part. But Destiny is also about collecting loot and upgrading gear and equipping better armor and fine-tuning your perks and swapping weapons and continuing on a never-ending quest to create the perfect future soldier.

There's a lot more than fighting in Destiny, and much of what the game has to offer when your guns aren't drawn is delivered through the UI, the layer of abstraction that joins gamer and Guardian. 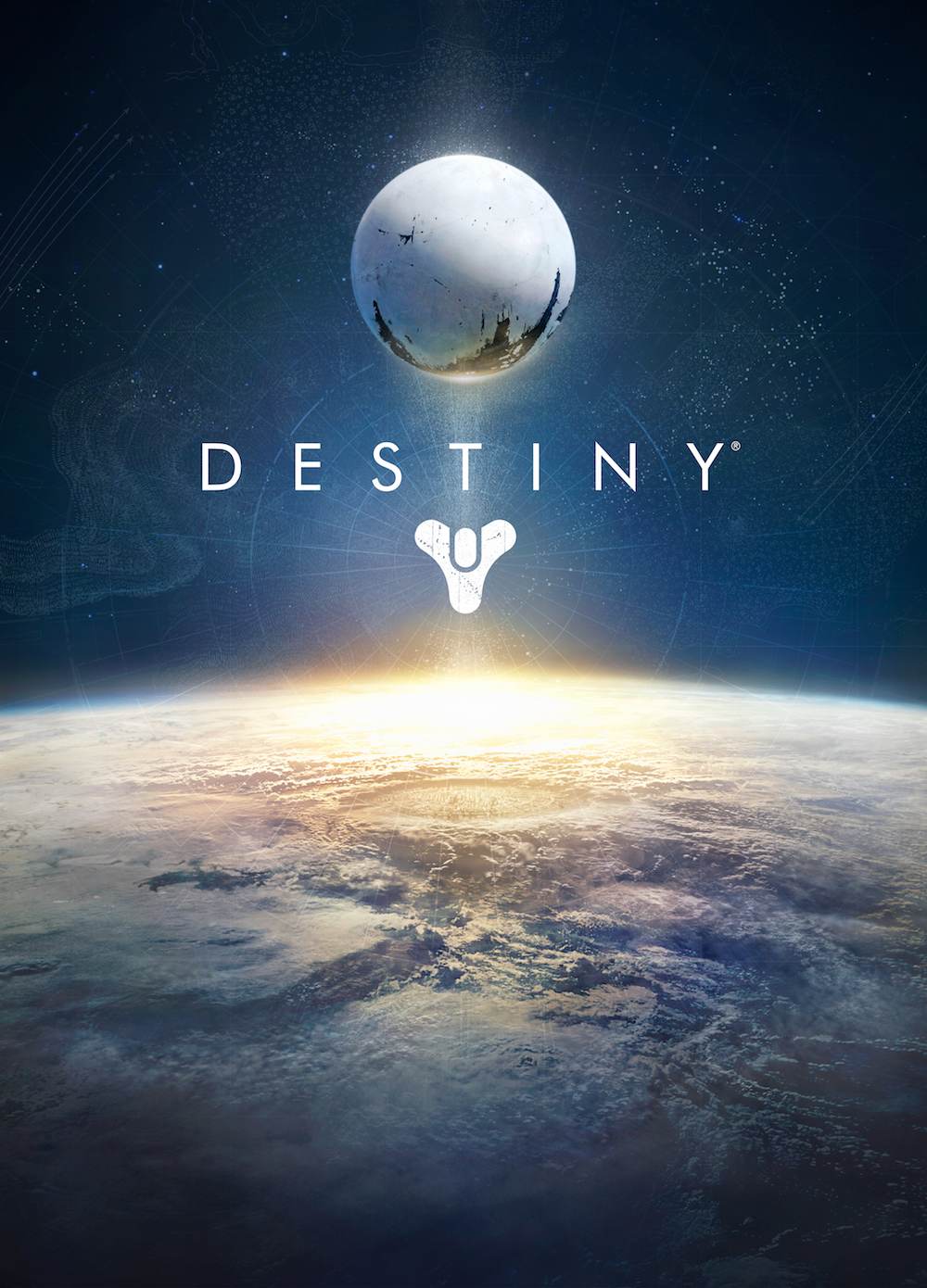 And lots to do means lots of menus. As a result, Bungie created a UI that eschews traditional menu systems bound to directional button pushes and boxes that players navigate through one by one. Designing a system like that could be excruciating for Destiny players. They needed a way to float through menus without feeling like they were navigating an Excel spreadsheet on their TV using only arrow keys.

Enter the free cursor, Bungie's antidote to the navigational tedium of spreadsheet menus.

As its name implies, the free cursor has more in common with the PC and mouse paradigm than a typical console interface. Instead of boxes to navigate in sequence, Bungie put an unobtrusive white circle on the screen and let players move it with a controller's analog stick. Bungie settled on this basic design early because it believed the system was "saving you time and a lot of tedious effort," Candland said.

Bungie co-founder Jason Jones gave Candland and his team the mandate to create the unconventional menu systems, but part of that mandate was to take "auto-aim time" to get it feeling right.

Candland was referring to the days after Microsoft purchased Bungie and the developer was transitioning Halo: Combat Evolved from a PC game to a console game. Bungie knew that analog sticks aren't as precise as the mouse that Halo was originally designed for. At a certain point, the studio created the auto-aim system, which subtly assists players aiming around the game world.

Applied to Destiny's UI, Jones was telling Candland and his team that they should take "weeks and weeks and weeks of time," if need be, to get it feeling and working correctly. That, according to Candland, is exactly what the UI team did, experimenting with buttons that sucked the cursor in or slowed it down before settling on what shipped with the game.

Then the question became one of implementation and details. The developers had the free cursor interface paradigm, but questions still remained.

Even its earliest incarnation, which Candland showed on stage, Destiny's menu had a bit of whimsy. In the macro, it zoomed out to show a rudimentary version of our solar system. With the click of a button, the camera flew in like a rocket, revealing planets and areas of interest in each.

That visual metaphor will seem familiar to Destiny players, because the game that shipped employs something very similar. But it almost wasn't so. For what seems like a long time, the UI team solved challenges inherent in the free cursor interface by simplifying layout.

The parent menus in Destiny's interface have long included children. Click on an icon that represents a piece of armor, for example, and a submenu will appear showing your inventory of, say, helmets. Hovering the free cursor over them will show a bit more information about them. Clicking on any of these will equip it.

But what's the correct behavior of a menu, in the context of a free cursor that introduces complexity that would be absent if your selection was bound to a single box at a time? If a player entered a menu and then decided to leave for another, they have total freedom of movement with the cursor, and there's little chance they'll exit with a straight line and turn perpendicular to find the next menu. Instead, they'll take the path of least resistance diagonally to wherever they wish to go next. 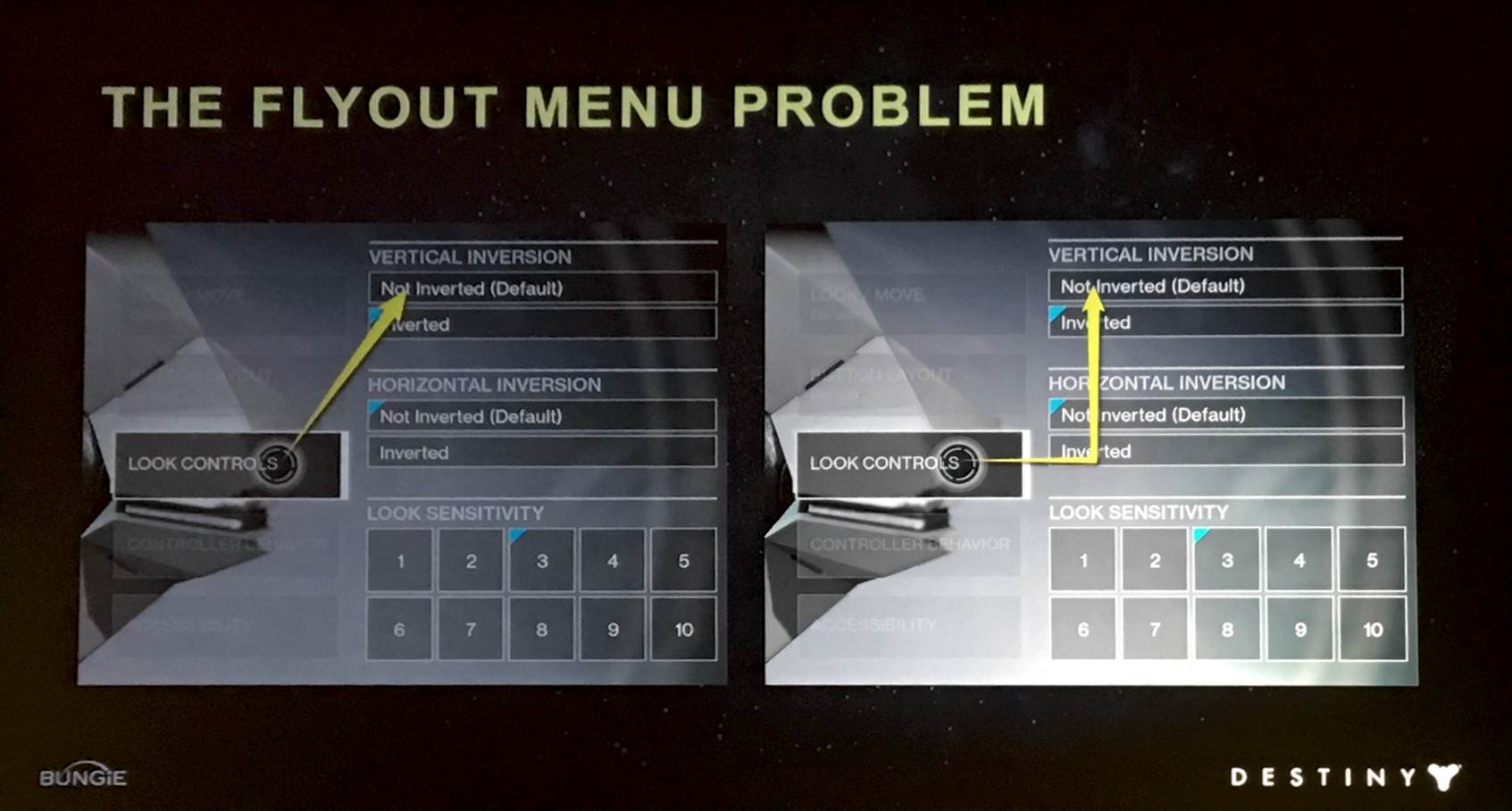 Bungie tested and tweaked menu behavior to account for human behavior, entering and exiting menus based on invisible algorithmic calculations happening behind the scenes as the user moved the cursor. The studying paid off, and the team put its theories and tests to work.

A few months before the game shipped, the UI team had arrived at what it believed to be the perfect, streamlined UI, easy to understand and navigate with the free cursor. Gone was the whimsy, replaced in the Bounties section of the menu, as an example, by a clean, orderly grid arranged into three rows of four green, rectangular menu buttons each.

It behaved much the same on Destiny's top menu, with a stack of six rectangular boxes with labels like Social, Story, Patrol, Strike and Raid.

It worked splendidly, but it had no soul. With only months before the game arrived in online marketplaces and retail outlets, Jason Jones stepped in again to change course.

Menus should provide a sense of place, Jones said. They should show your past and future, offering players nearly subliminal incentives to keep playing and unlock currently inaccessible areas on, say, the moon and Mars.

And they needed to do this at the 11th hour, before Destiny shipped in September. 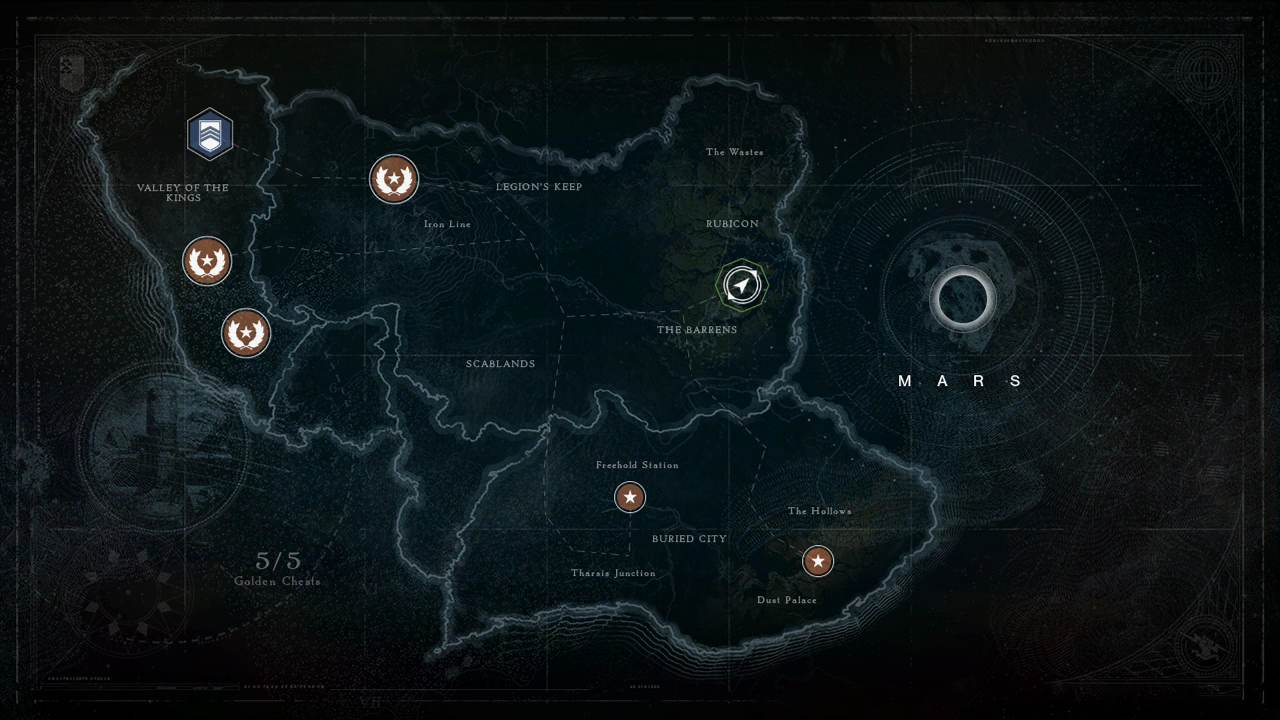 The UI team took what it learned from years of development and created a menu that expanded and scrolled with the cursor's movement, popping out submenus and subtly rearranging the UI for ideal, on-the-fly layouts. It zoomed in on character models as players contemplated switching armor. It popped up information-filled dialogue boxes as players hovered over their gear. And it did so with style.

The UI redesign wasn't limited to gear selection, though. It carried over into solar system navigation. The look of Destiny's interplanetary travel system, where each planet and satellite appears on screen as a kind of futuristic cartography, offering current mission selection and teasing what's to come, was born here, in the final few months of Destiny's creation.

And so Destiny arrived on four consoles spanning two generations of hardware in September 2014 with iconic menu designs and a UI paradigm designed from its inception to make players' lives easier. It was the result, as its UI design lead chronicled at GDC 2016, of several years of mistakes, successes, tests, visions and decisions. And it pretty darn near wound up being unremarkable.

But according to David Candland, Jason Jones' insight, years of iteration and the UI team's crunch-time hustle culminated in a user interface every bit as bold as it was always supposed to be. It just took a while to get there. And if you've been following Destiny's continuing development since the fall of 2014, that's not at all unusual for the game maker that bet its future on the proposition that Destiny is an object in perpetual motion — and that, like the sun at the center of our solar system, Bungie is the irreplaceable well of gravity that keeps everything in orbit and in motion.

GDC 2016: All the news from game development's biggest gathering