Adrift tells the story of an astronaut who's been marooned in space after her space station is torn to shreds by disaster. But "adrift" is also a fine descriptor for the game itself, which hovers between the narrative-centric style of Gone Home and Firewatch and a more mechanically dense and demanding experience those other games eschew.

If they sound like two incompatible ideas, I'm sorry to say that you're not far off: Adrift's mechanics often obscure or even actively detract from the story it attempts to tell. That often feels like the intent — Adrift is thematically chock full of this kind of discord: hope and horror, dazzle and dread. The end result is an unshakable experience — but one that never congeals into an excellent game.

Adrift opens on what's almost certainly the most precarious moment in Commander Alex Oshima's life. Her station is in ruin, her protective suit is compromised and the status of her crew is unknown. Equipped with malfunctioning thrusters and a leaky oxygen tank, Oshima begins the long, arduous task of repairing her EVA suit and replacing the vital components she needs in the Northstar IV station to activate an escape pod back to Earth.

There's no gravity on the station (it being in space and all) and the player has a complete, 360-degree range of movement. This is disorienting at first, as you might suspect, but I pretty much had the hang of it after a brief, effective tutorial section. The smartest inclusion is Oshima's ability to reorient to whatever environment she's in — done by pressing the left stick in — which is helpful when the several dozen chunks of your space station are all floating at completely disparate angles.

The joy of sailing through space is undercut ever so slightly by one unfortunate spacesuit design choice: Oshima uses her suit's oxygen supply for propulsion as well as ... you know, breathing. Fly too far in any one direction without picking up the oxygen containers scattered generously through the station (and not-so-generously in open space) and it's "game over."

This choice is the number one way that Adrift maintains tension and the only real mechanism for creating difficulty. It's also another seeming incongruity: Float lazily through space all you want, but if you accidentally cruise too far from the O2 station, well, you just became a very squishy asteroid. 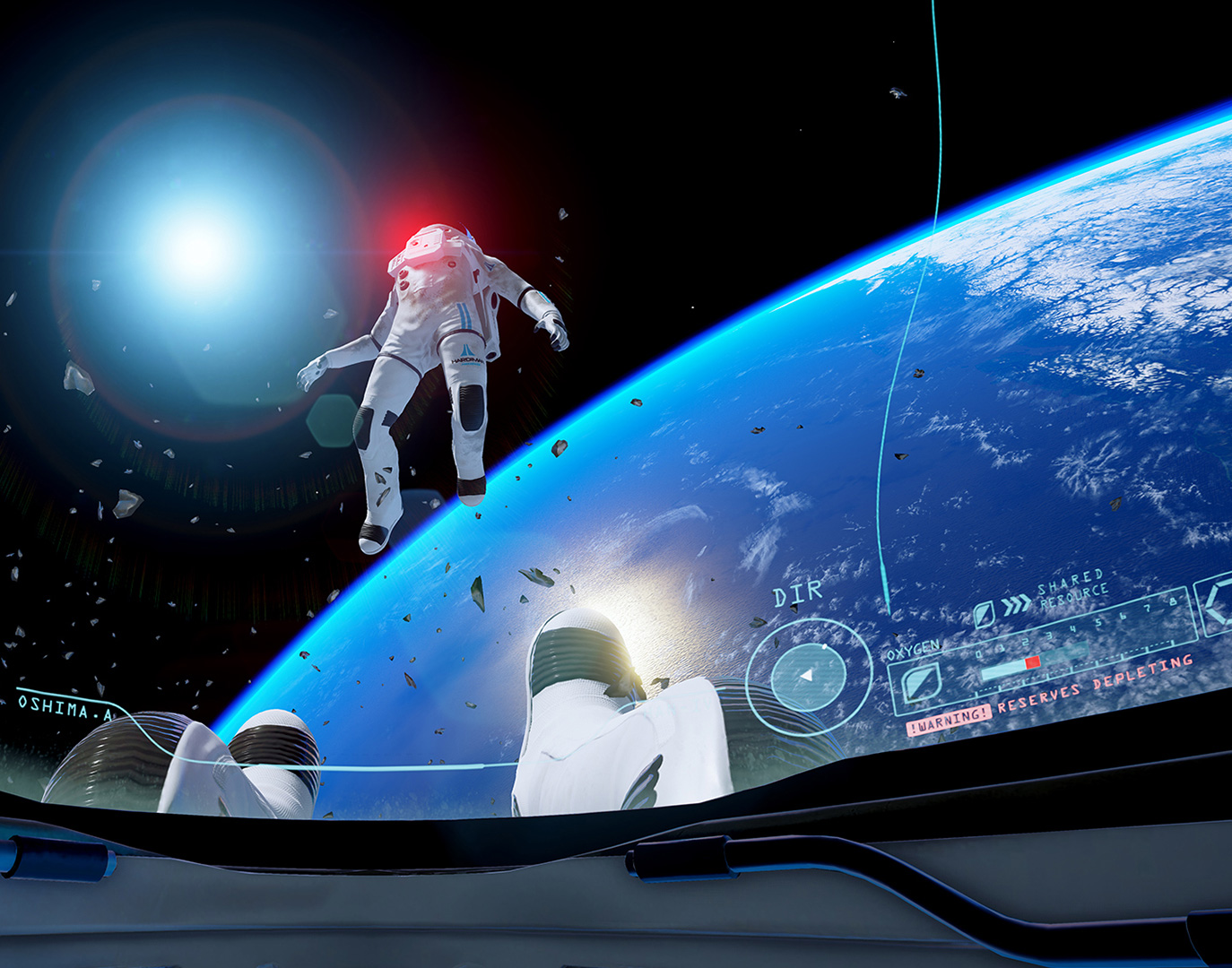 The view through the Oculus Rift

Adrift is also playable using the just-launched Oculus Rift, albeit with currently locked graphical settings. It can be an overwhelming experience to play Adrift on a standard monitor, but suffocating due to not reaching that air canister in time when you feel like you're inside the game is much more intense.

While this method of playing the game can be hard on your stomach if you don't have your VR sea legs, you can take the headset off at any time to take a break and play in a windowed version of the game on your monitor before continuing in VR. There's also a visual comfort aid that blocks much of the view outside of your visor if you hit the B button.

A jarring "jump" effect moves the glass of your space suit a few inches away from your face if you try to lean forward too far and touch the virtual glass. It's an odd concession to the immersion breaking act of clipping through your space suit, but it can definitely feel odd. I quickly learned to avoid moving my head in that manner. But for players with a strong stomach and a sense of adventure — not to mention large wallets — though, this is likely the best way to play the game.

As odd as it may sound on paper, the oxygen-management system — along with the starkly beautiful visuals — creates one of the most immersive game experiences I can recall. I have been in virtual space plenty before, but I've never felt something quite as intense as using the last bit of my O2 flinging myself at a floating container, just hoping I got the trajectory right. It requires constant mindfulness, and that keeps your focus completely within Adrift's world.

The ship's center is a hub of sorts, and Oshima must travel to the end of four different spokes to obtain one of four components needed to launch the escape pod. The stations that fabricate those components also repair the suit's systems, giving it a larger O2 tank or better thrusting capabilities.

While upgrades like that are pretty explicitly "video game-y," they're a welcome addition to Adrift and a good reminder of why games have been using variations of them for 30 years: They're fun. It's fun to get more powerful, as trite as it may be to say.

Adrift also makes excellent use of audio and email logs, both of which are frequently employed so poorly as a storytelling device in other titles. Smartly, each spoke of the Northstar IV is focused on the stories of one or two individual crewmembers, which makes it so much easier to form a connection to their emotional life. The few emails you'll unearth are exclusively major plot points or real human drama, none of the boring, jargon-laden screeds that litter terminals in most games.

Unfortunately, tracking down these story fragments ... or pretty much anything in Adrift is often an exercise in frustration, due in large part to how much freedom of movement it affords the player.

Adrift provides an on-screen compass with an indicator of where the player should travel to uncover the next Northstar component they need to progress (as well as O2 refills) but because it's a two-dimensional indicator for a three-dimensional world, it's maddening trying to figure out where, exactly, you should be headed. There's a pulse that can temporarily display nearby O2 and key items on the HUD, but it's equally futile thanks to odd choices like doors and email terminals being indicated by the same icon. In other games, this would be annoying. In a game where going the wrong direction can be fatal, it's infuriating.

The result of this cartographical debacle was that I was really hesitant to hunt down anything that wasn't on the critical path, because I was so fearful of not finding my way back. It didn't help that there were some items (like collectible SSDs and "filtrum terminals") whose utility I still didn't understand when the credits rolled.

Also: There's no indication of how many audio logs, etc. you're missing, or which ones you've already heard. If it didn't seem so at odds with the rest of the game, I would describe many of these decisions as "willfully antagonistic."

The most damaging effect of these failings is that there are likely plenty of story fragments still hidden from me within the Northstar IV that I never encountered. Due, I assume, in part to these missing story chunks the overall narrative left me cold, even though individual threads were fairly moving.

As a simulation of being marooned in space, Adrift is peerless. The sense of weightlessness, the sense of scale, just being in the world are all astonishing. But it's impossible to divorce the immersion from its mechanical failures, which sours what otherwise could have been a new high bar for narrative-centric games.