This tomb is filled with bobby traps and even some lethal boulders made out of skeletons. If you know your Indiana Jones, you might know how to access a key secret area. You just need to know where to cut. 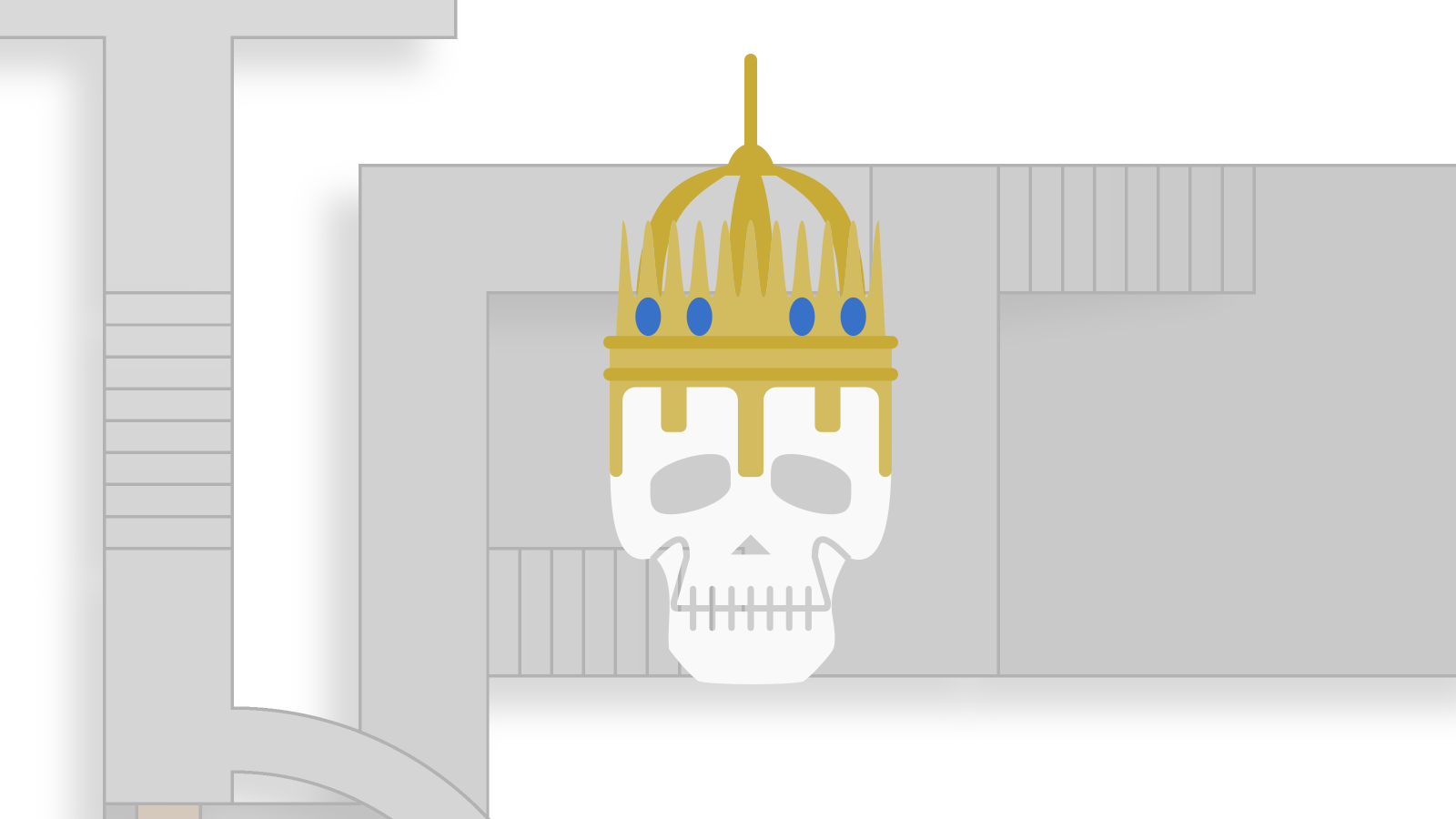 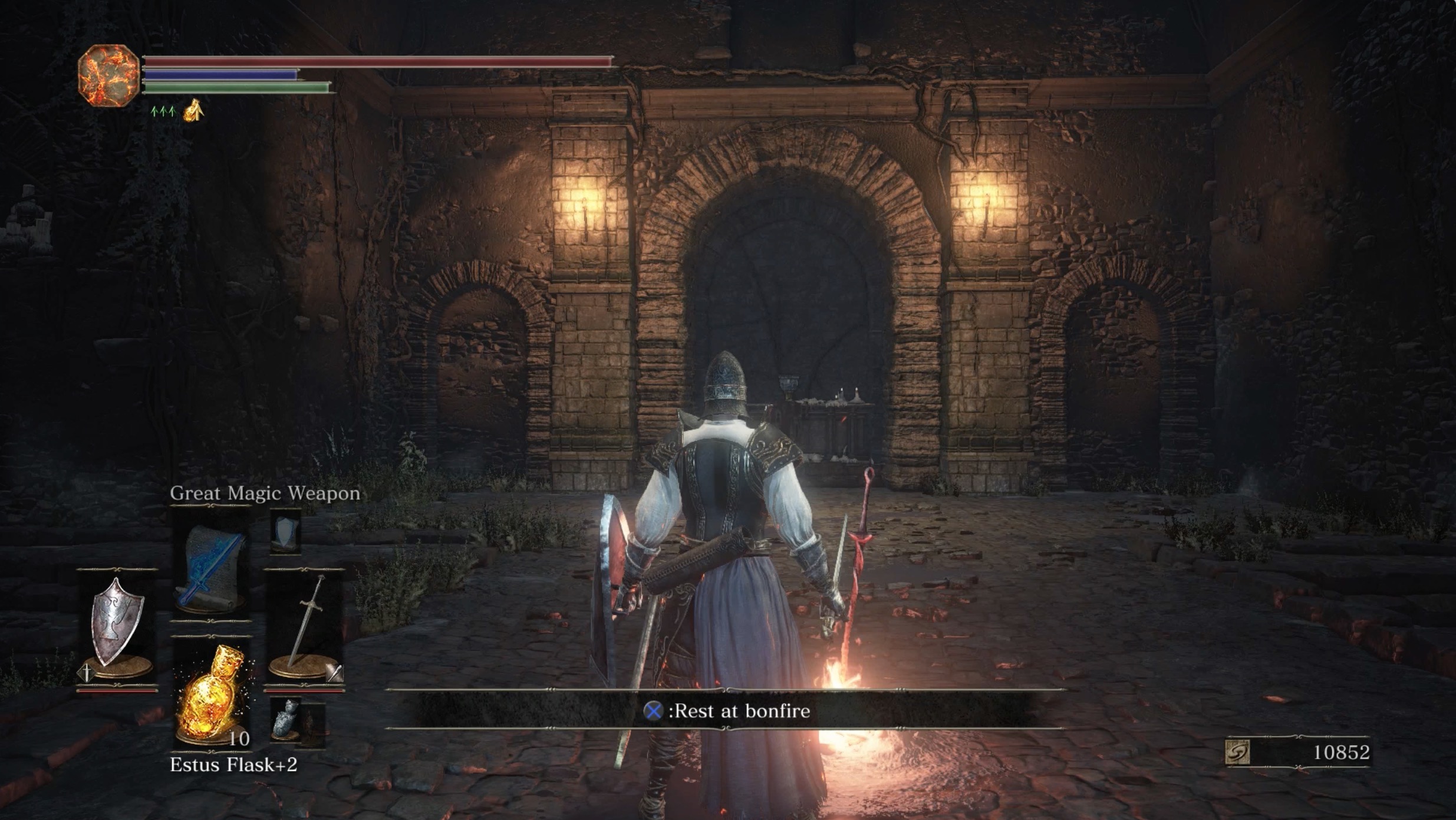 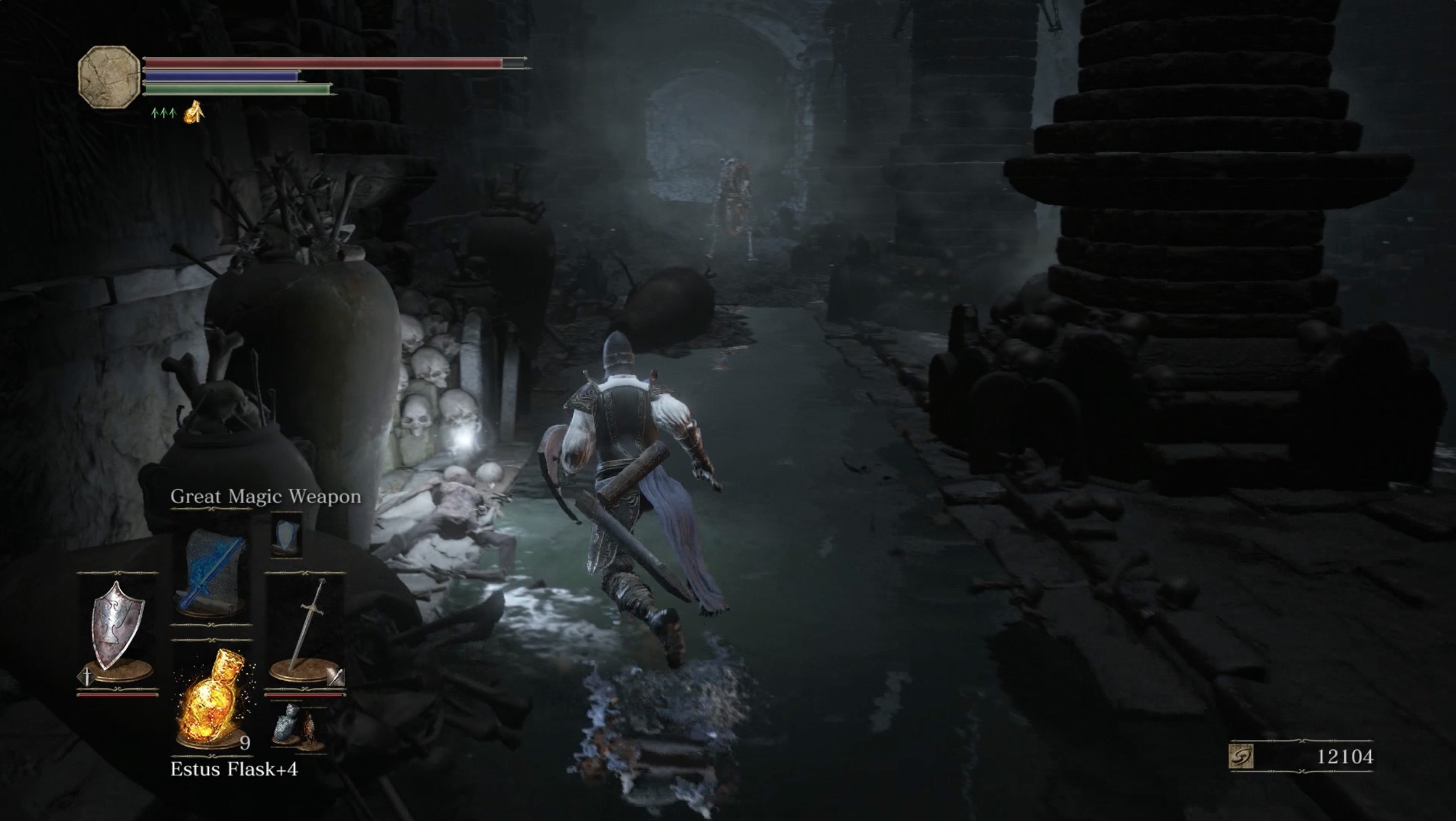 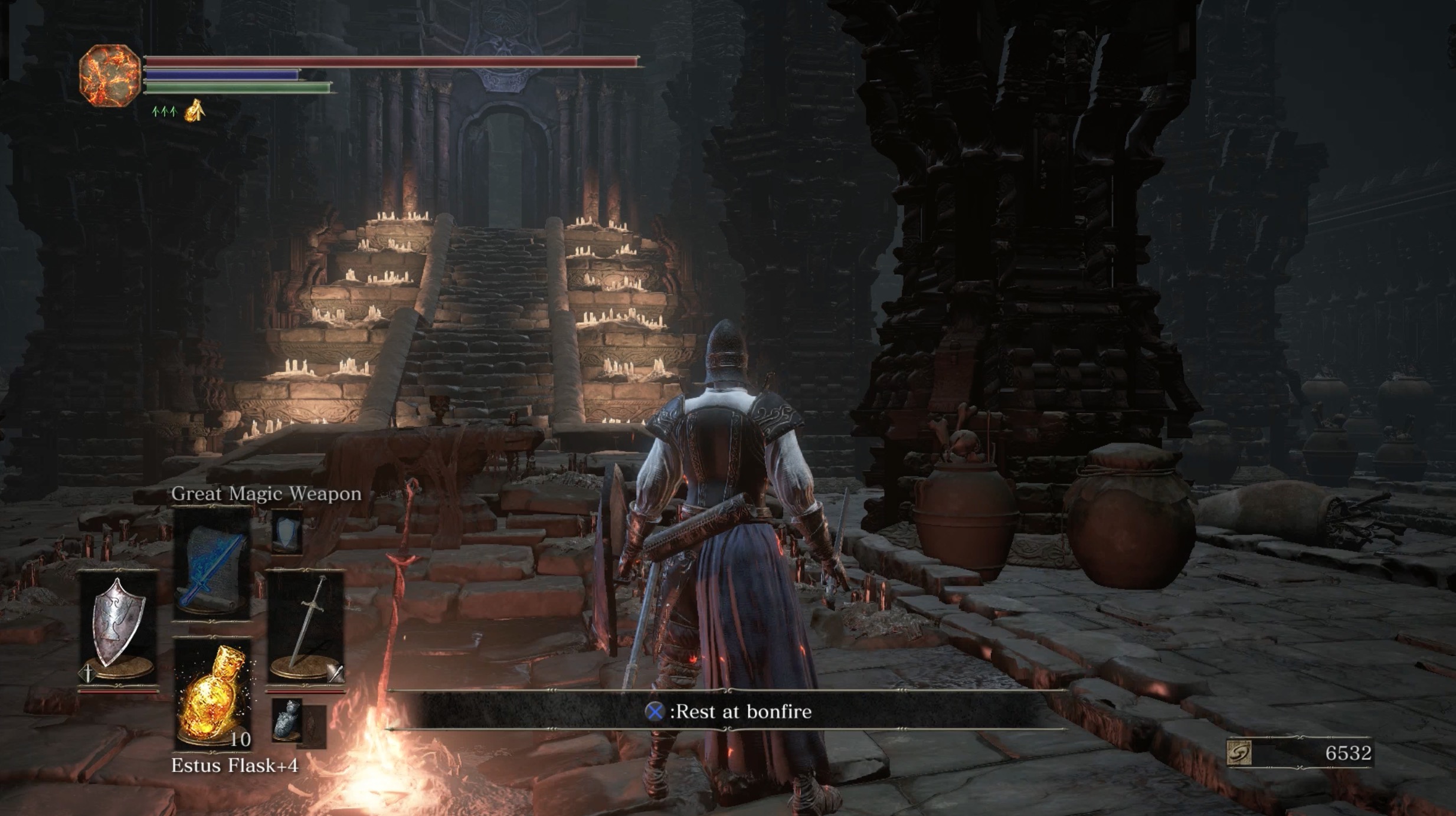 Access the catacombs by going back to the Abyss Watchers bonfire. Head to the altar to open the passage to the catacombs. 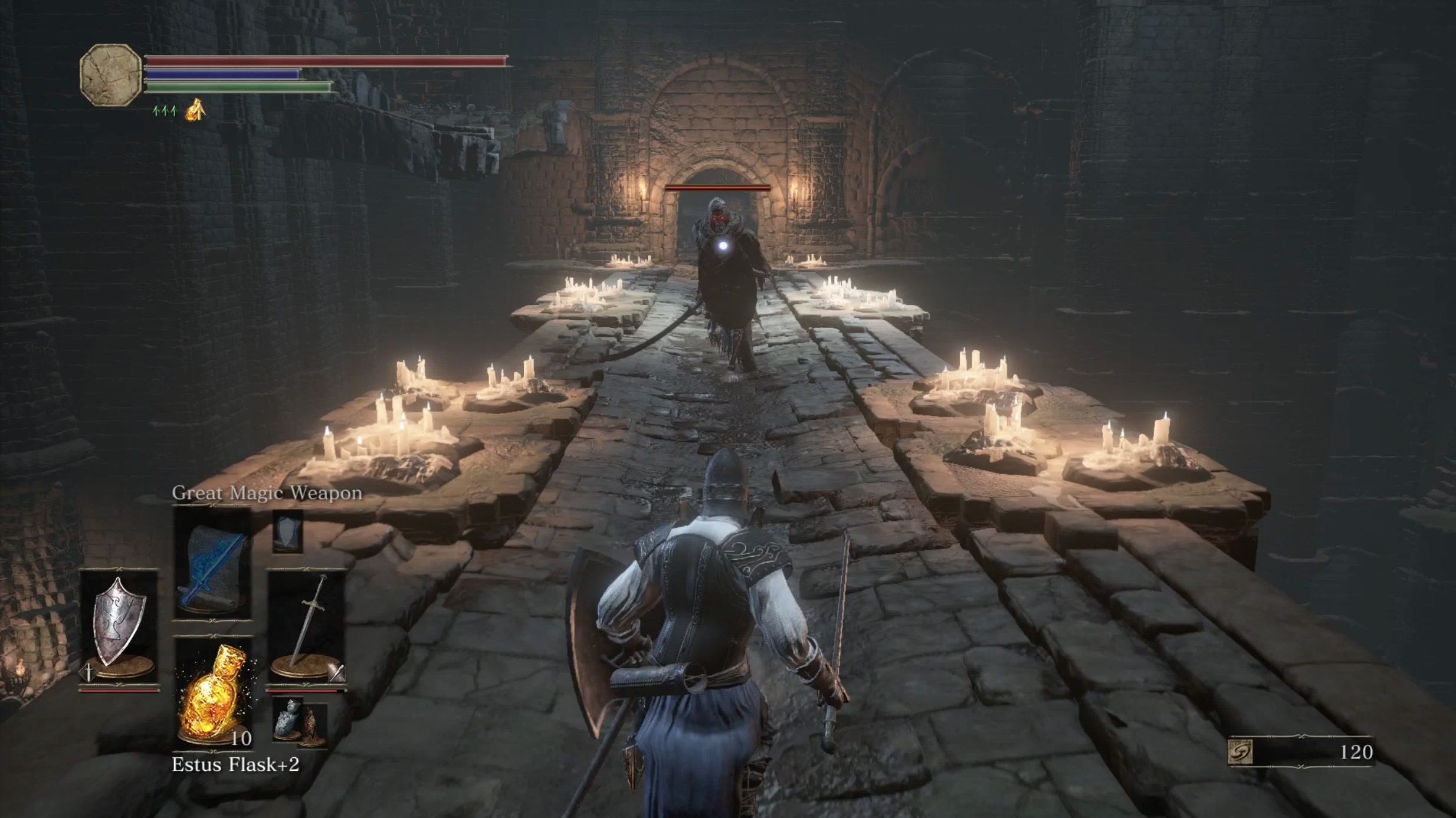 Note that many, but not all of the Skeletons will need to be killed twice before they're considered truly dead. Once inside the catacombs, make a left, grab the Carthus Rouge, then cross the bridge on the right. If the Skeleton Swordsman on the bridge is giving you trouble, you can lure it to the open area at the beginning of the catacombs for a more open combat area. 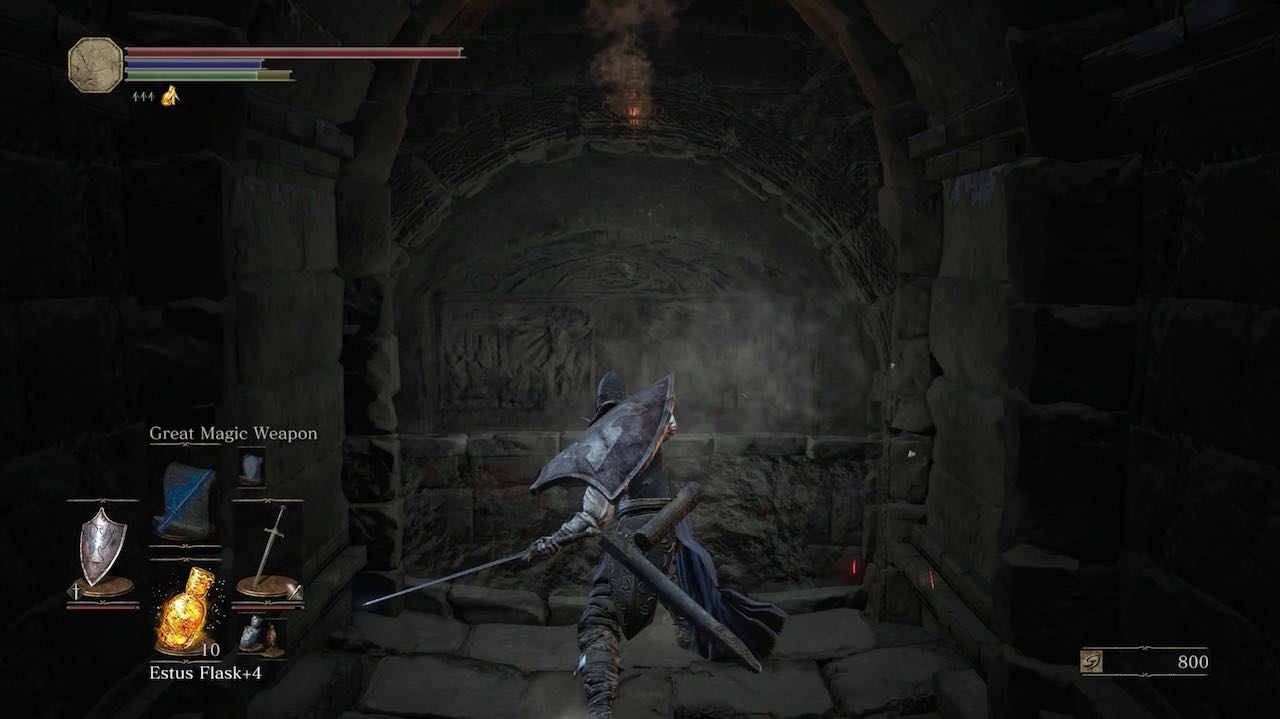 When you're inside the room with the multiple pillars, make a left and go up the stairs. At this T-intersection, make a right, kill the skeletons and grab a Soul of a Nameless Soldier. Return to the T-intersection, pass the stairs, head to the end of the hallway and go down the ladder. Grab the Soul of a Nameless Soldier at the bottom. Go down the path, take on the knife-throwing Skeleton Swordsman and grab the Sharp Gem. Attack the arched illusionary wall nearby. It's the only arched wall in the area. Go down the passage and grab the Carthus Pyromancy Tome. Go back to the arched doorway and make a right. When you exit the hallway, you'll be in the lower tier of the previous room with the multiple pillars.

To continue on the critical path, go right. Note the Skeleton Swordsman blocking the doorway. Defeat that him and his buddy nearby. 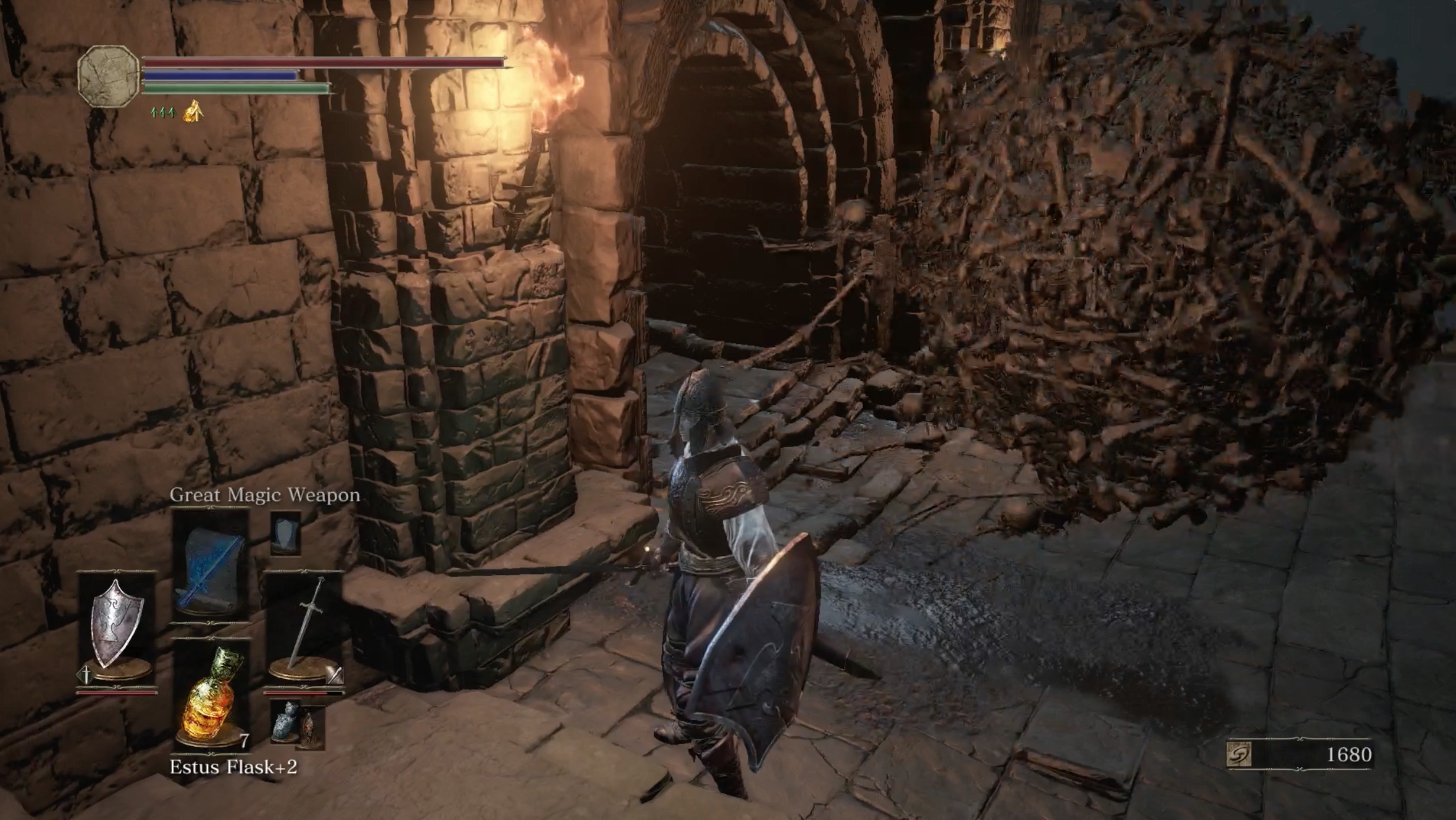 Head back to the doorway previously blocked by the Swordsman. When you're about one third the way down the long set of stairs, run; there's a boulder right behind you. You can recover stamina by stepping left or right of the boulder's path at the bottom of the steps. If you're particularly efficient with your stamina or can withstand the impact of the boulder, you can spend a couple extra seconds grabbing the Soul on the stairs. 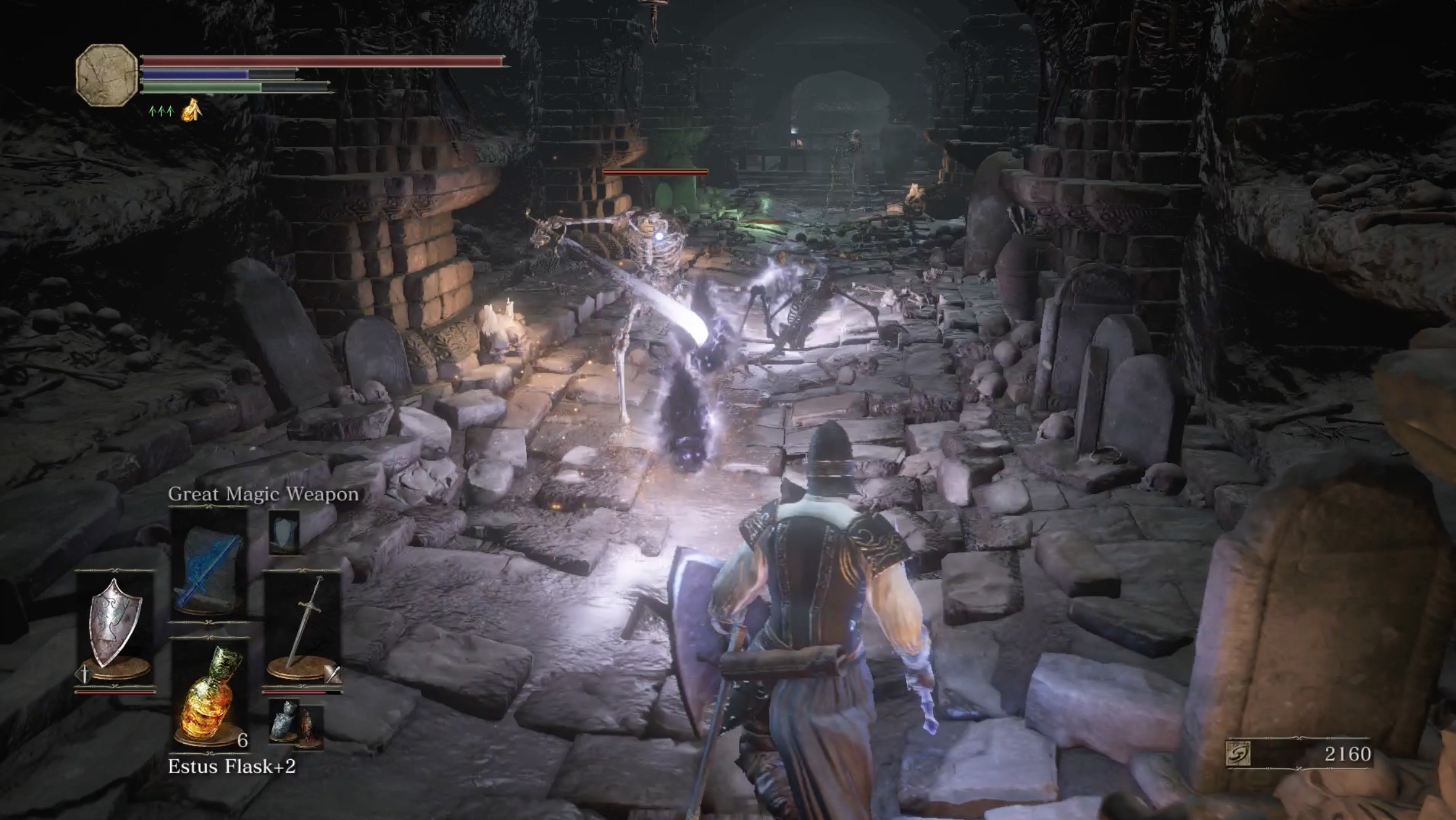 Continue down the passage while being mindful of the traps on the main path. Look for slightly elevated tiles; these are actually the buttons that trigger the traps. Some of the Skeletons on this path are also using dark spells with homing capabilities. 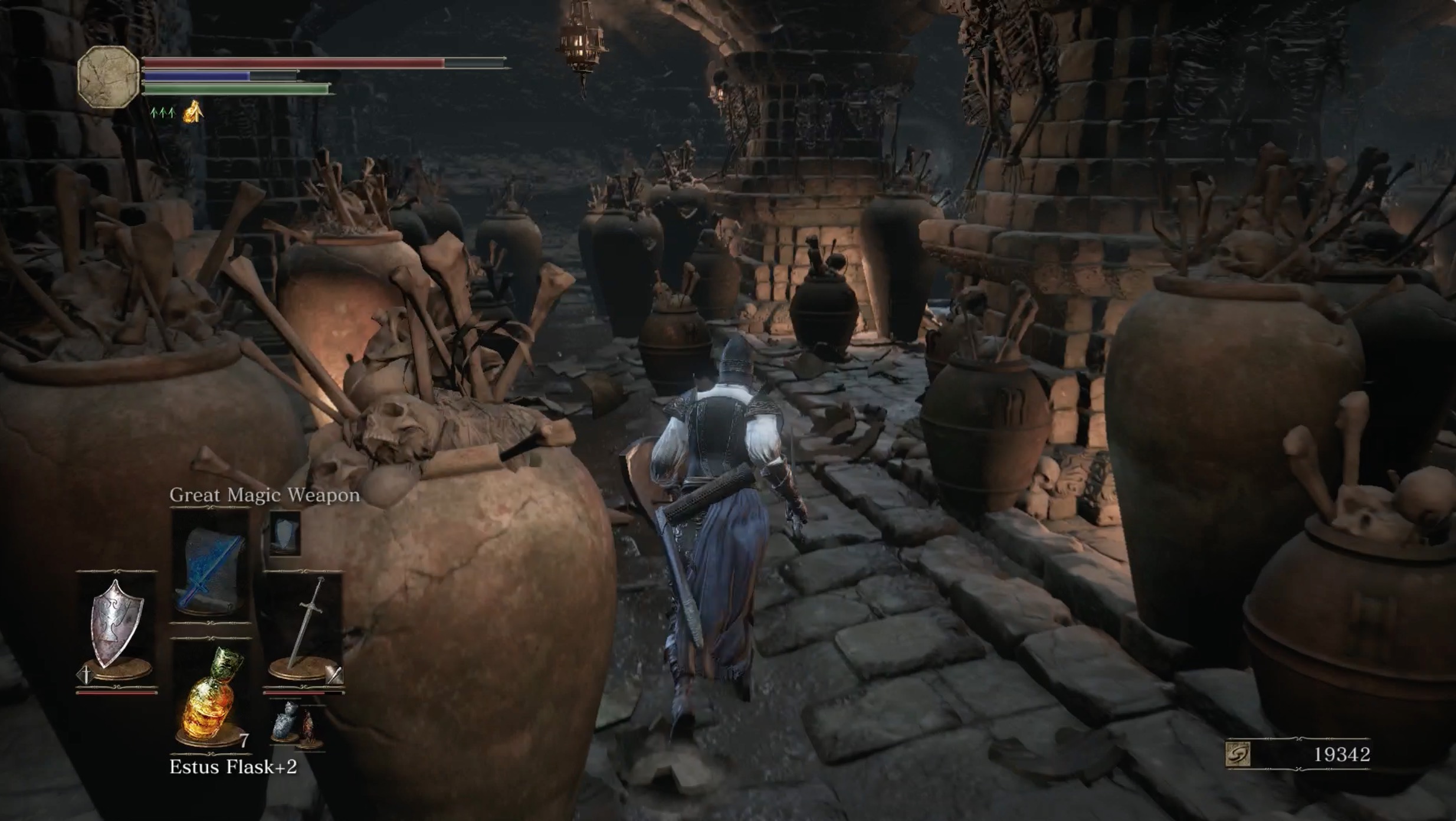 After making the first right down the hallway, look for a section to your right that's packed with bones in jars. About a third of those jars contain homing dark spells, so defend yourself accordingly. If you make you way to the back of this section, you'll find a Carthus Milkring. 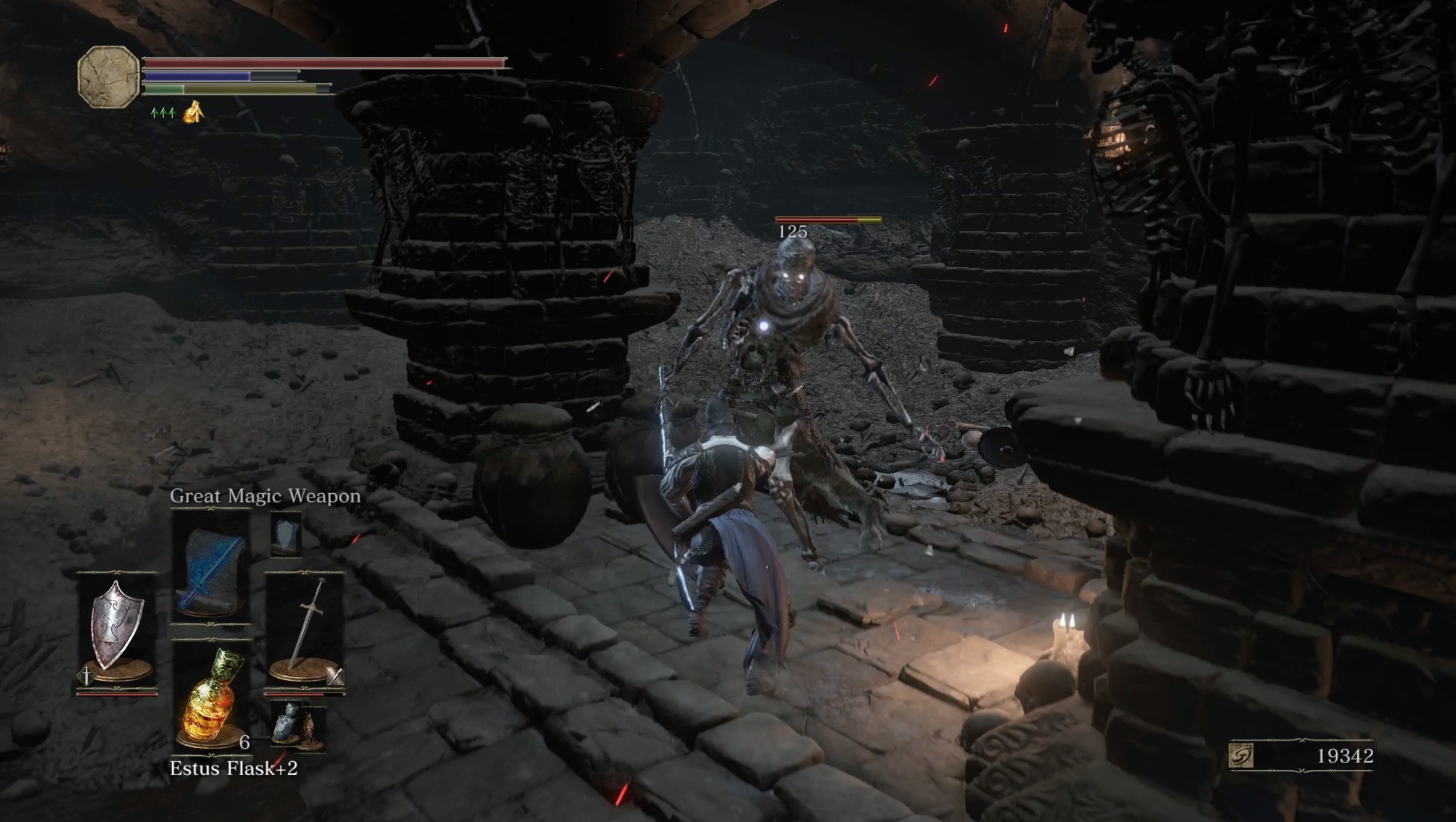 When you see another Skeleton Swordsman, veer right. You'll immediately encounter two more Swordsmen, a Soul and another trap button. Instead of falling through the hole in the floor at the end of the hall, make a right. Note that there is an Ember at the back of the hole. 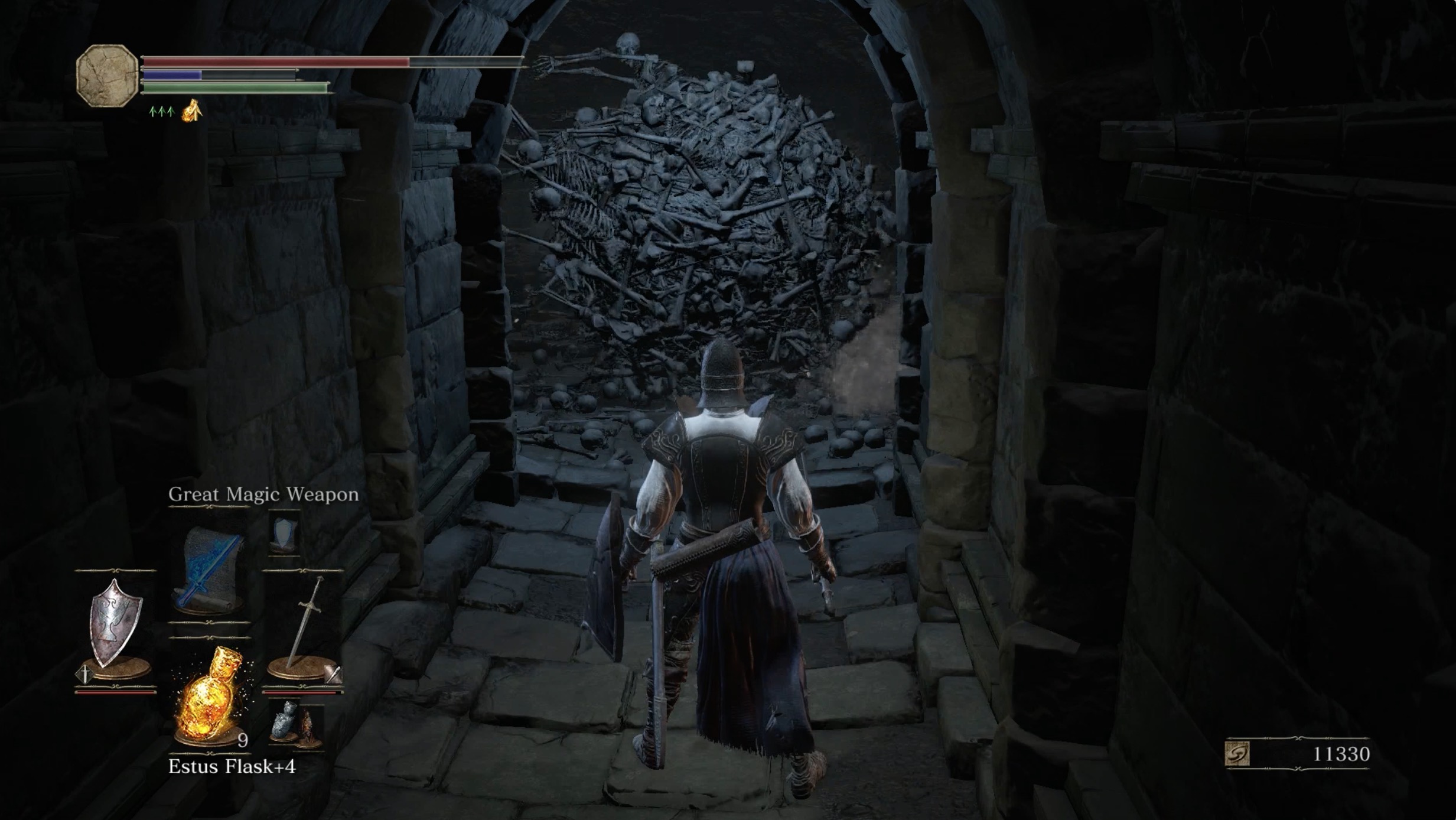 Note the skeleton boulder that's rolling back and forth through the next hall. When it passes right, go left to grab the Soul and return to the hallway from where you came from. Once again, wait for the boulder to pass right. Follow it, then make a left, leading you to the next bonfire.

Return back to the intersection with the boulder in the hallway. When the boulder goes right, make a left and run down the stairs. Jump left or right to avoid the boulder. At the end of the boulder's path is a Dark Gem. Going right of the boulder's path will lead you to a T-intersection. The passage on the left will lead you to a Knight Slayer's Ring, an Ember and a My Thanks! gesture. The wider passage on the right will lead you to variety of enemies including a Lesser Crab, Writhing Rotten Flesh and a Skeleton Wheel. The Skeleton Wheel relies on direct rolls toward you. Simply dodge sideways to avoid their charges. Attack them while they skid to a stop. Halfway up the passage is a Titanite Shard. At the end of the passage is a Carthus Bloodring. 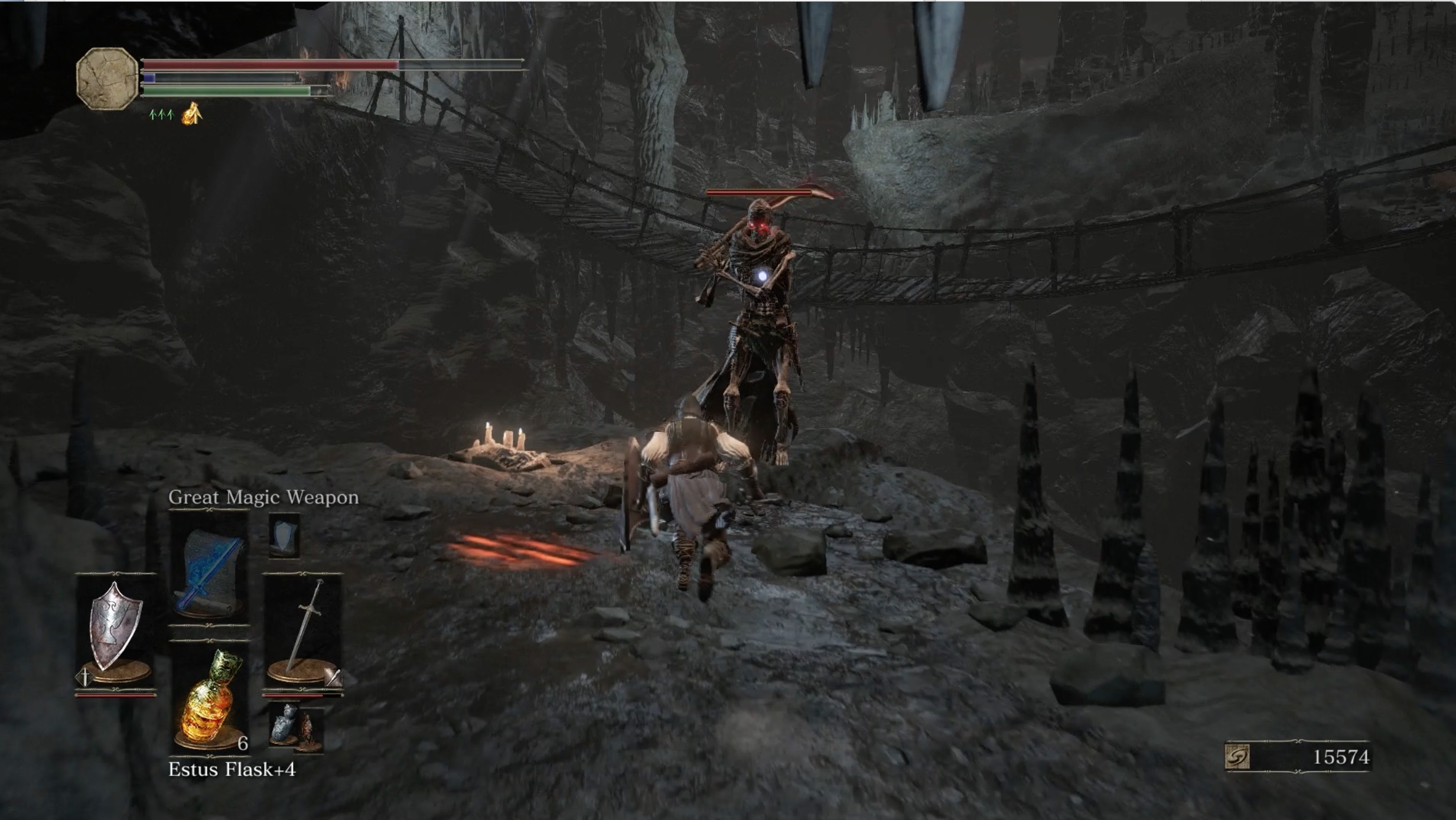 Now go left from the boulder's path. Grab the two Titanite Shards and take on the Skeleton Swordsman. Taking either of the two closest passages will take you up to the same area. This is patrolled by a couple Skeleton Swordsmen. Grab the Grave Warden's Ashes and the Carthus Rouge before going back down. When you're back at the lower level, take the rightmost passage, which will lead you into a cave. Halfway down, take out the Crystal Lizard, which will drop a Dark Gem. When you reach the other end of the cave, grab the three Yellow Bug Pellets and a Large Soul of a Nameless Soldier, and take out the Skeleton Swordsman. 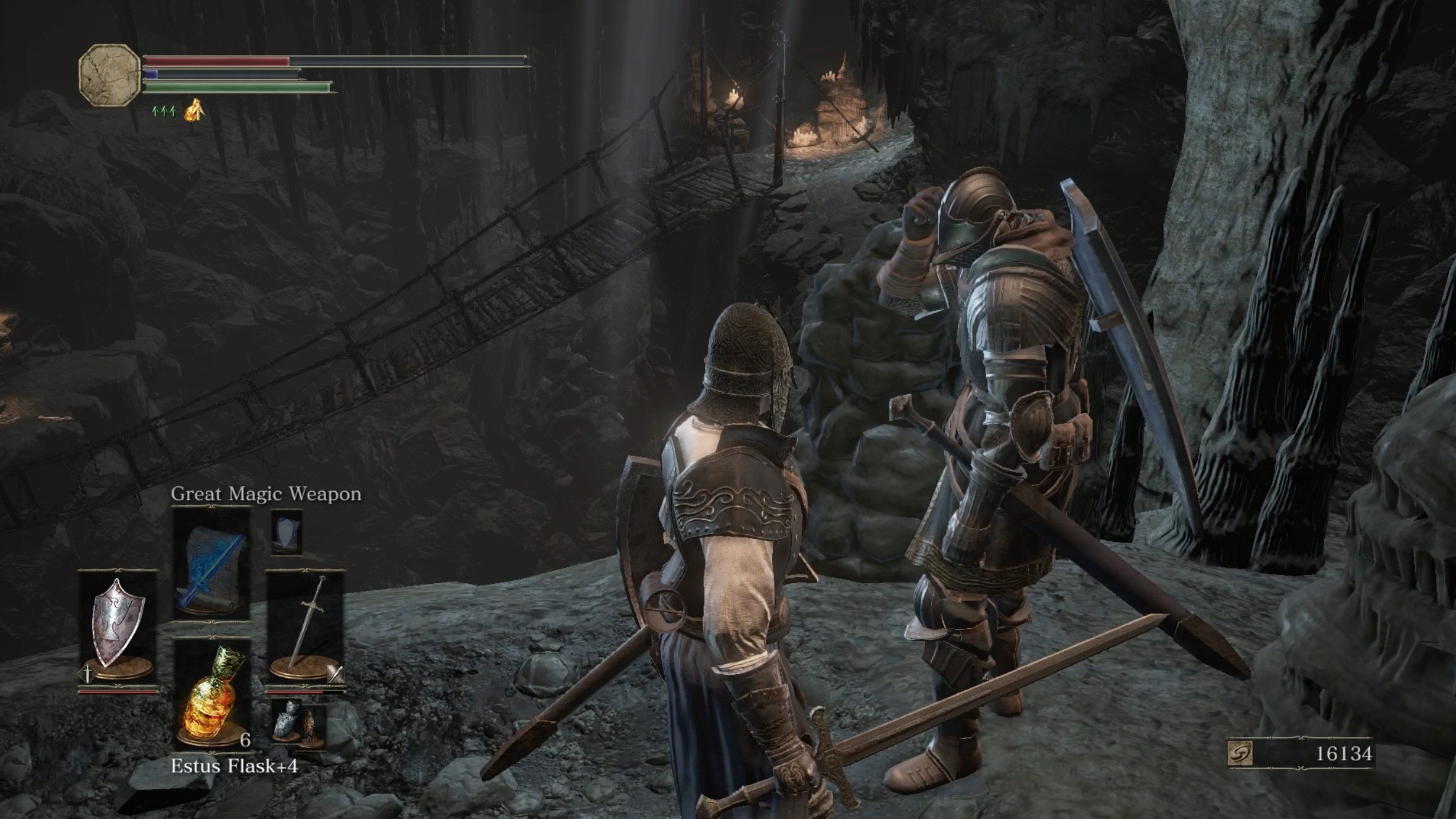 Then make a hard right, grab two more Souls, then make a hard left. You should be facing a suspension bridge. Make a right up to meet up with Anri again. After your conversation, cross the bridge and go up the path to reach the next boss fight. 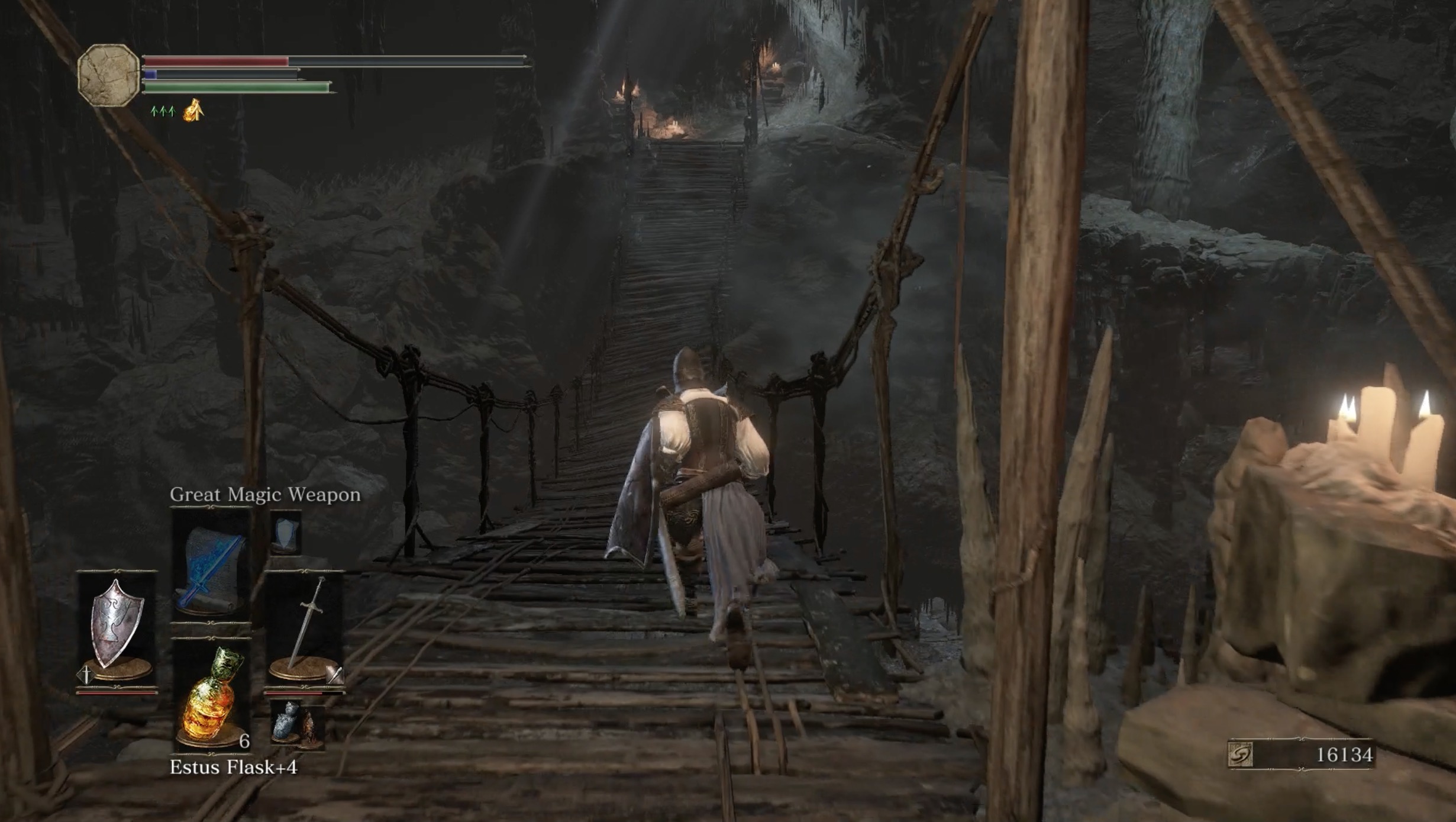 This is the darkest setting for a boss fight in Dark Souls 3 but it is also one of the easiest battles. Head for the glowing item to start. Ignore the center of Wolnir, so shift the lock-on from the boss' chest or head to one of its hands. Also, ignore the harmless dark mists that appear after each attack. While focusing on its hands, watch out for sweeping arm motions and slam attacks from its palms and fists. It's motions are slow so you should have enough time to dodge. To be efficient, alternate your attacks to one hand as you're dodging the other. The second phase will trigger when you've eliminated the bracelets from one of its wrists.

Wolnir won't change its repertoire much but you will have to contend with distracting skeletons. Take care of them first if they're crowding you. Otherwise, focus on the remaining hand since Wolnir's attacks will also damage the skeletons in the process. Its most dangerous attack is a downward stab with its sword. As long as you have full health, you'll be able to withstand the effect area of the stab. Focus on the remaining bracelets to finish the fight.

Advancing beyond the doors that open after the boss fight will lead you to the next area, Irithyll of the Boreal Valley. Alternatively, you can turn around to access a large optional area called Smouldering Lake.