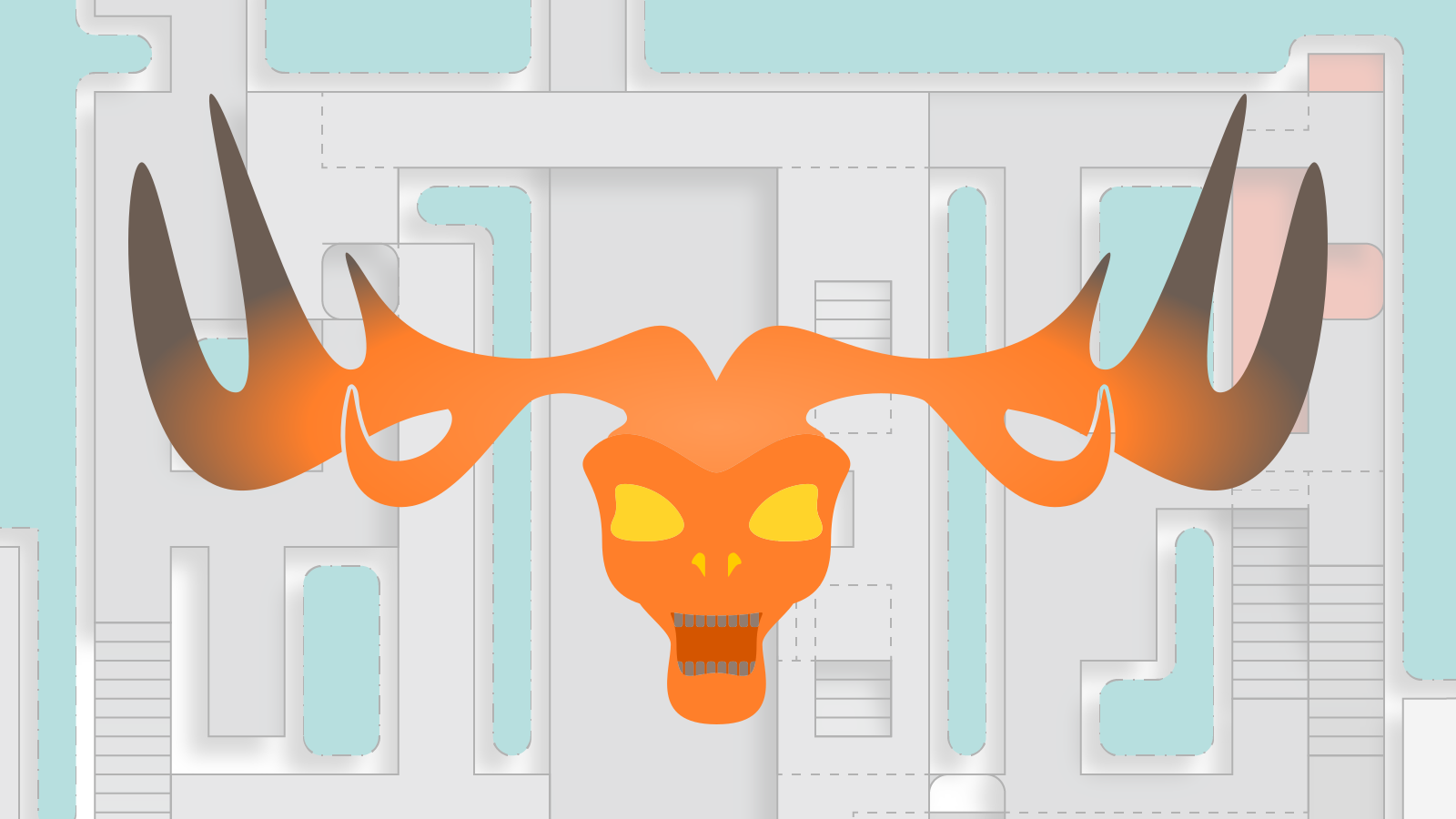 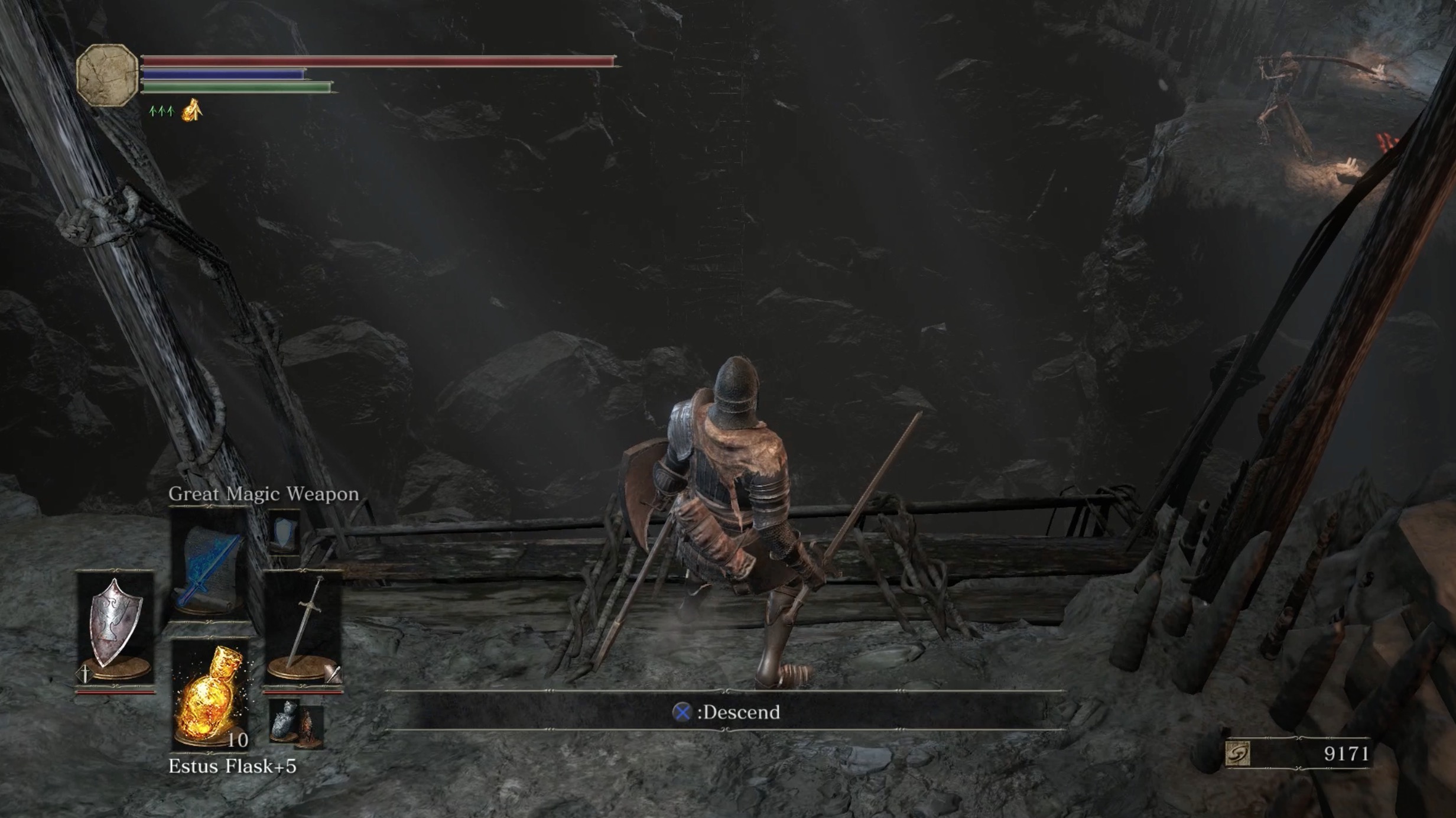 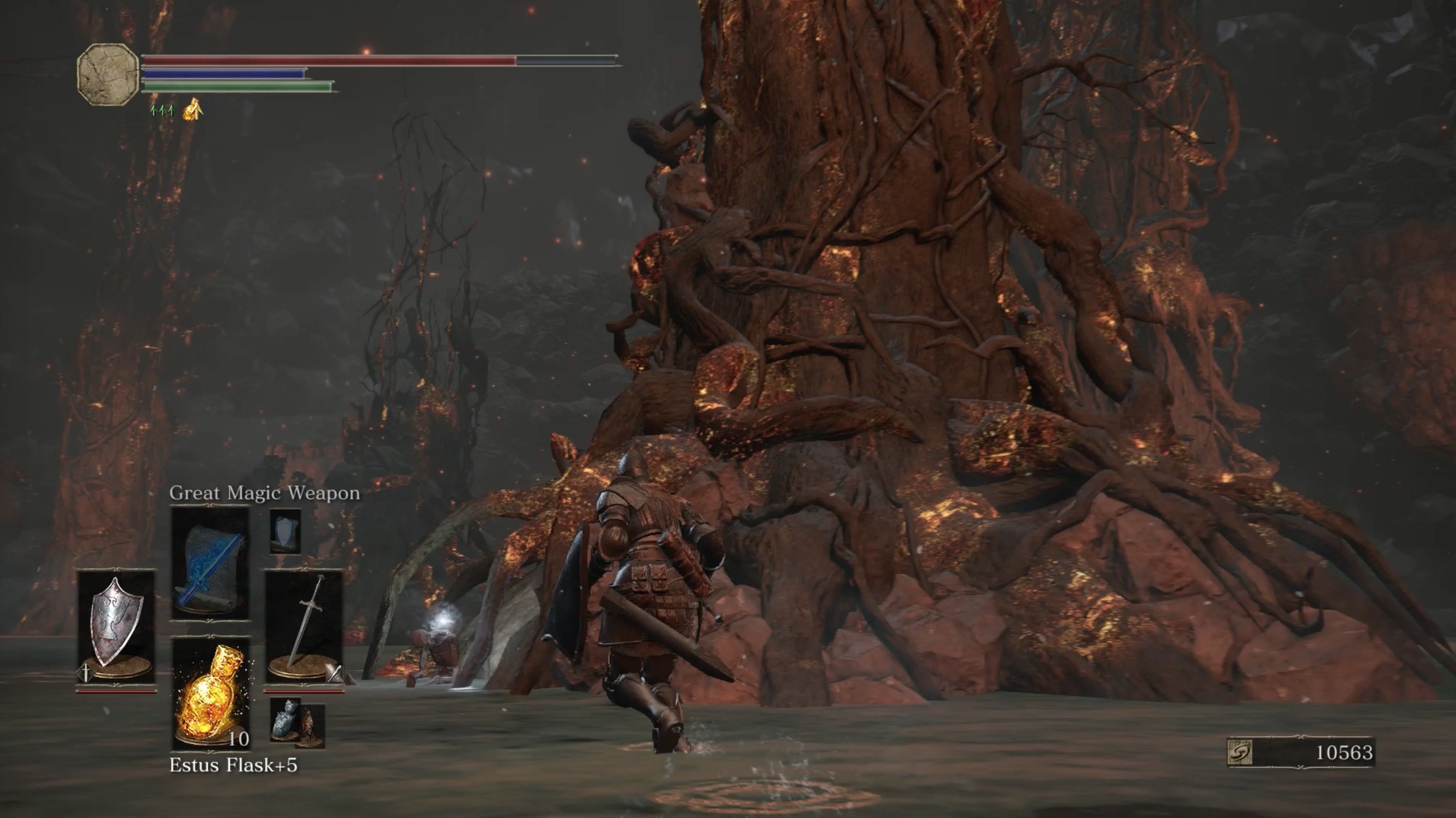 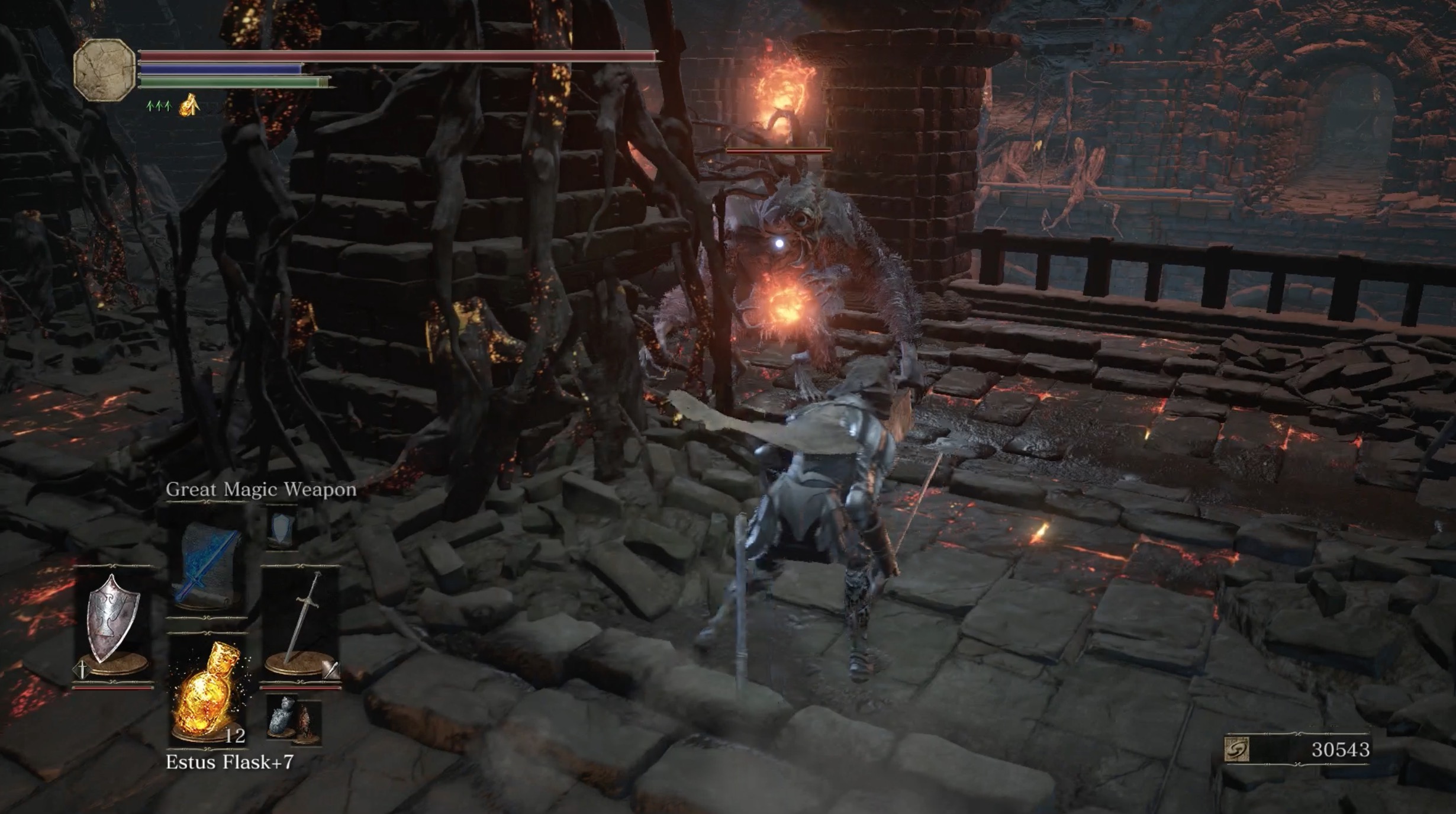 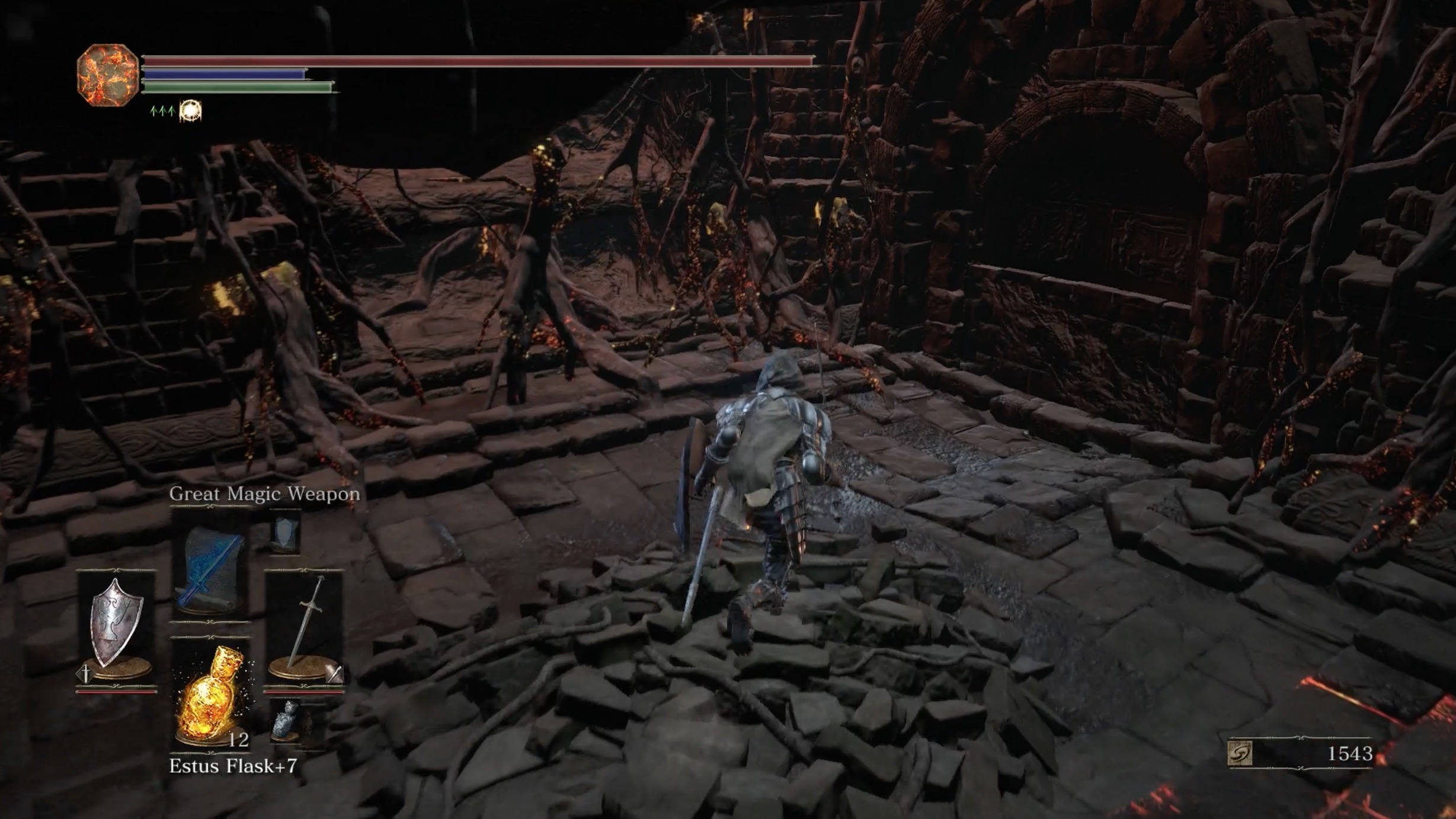 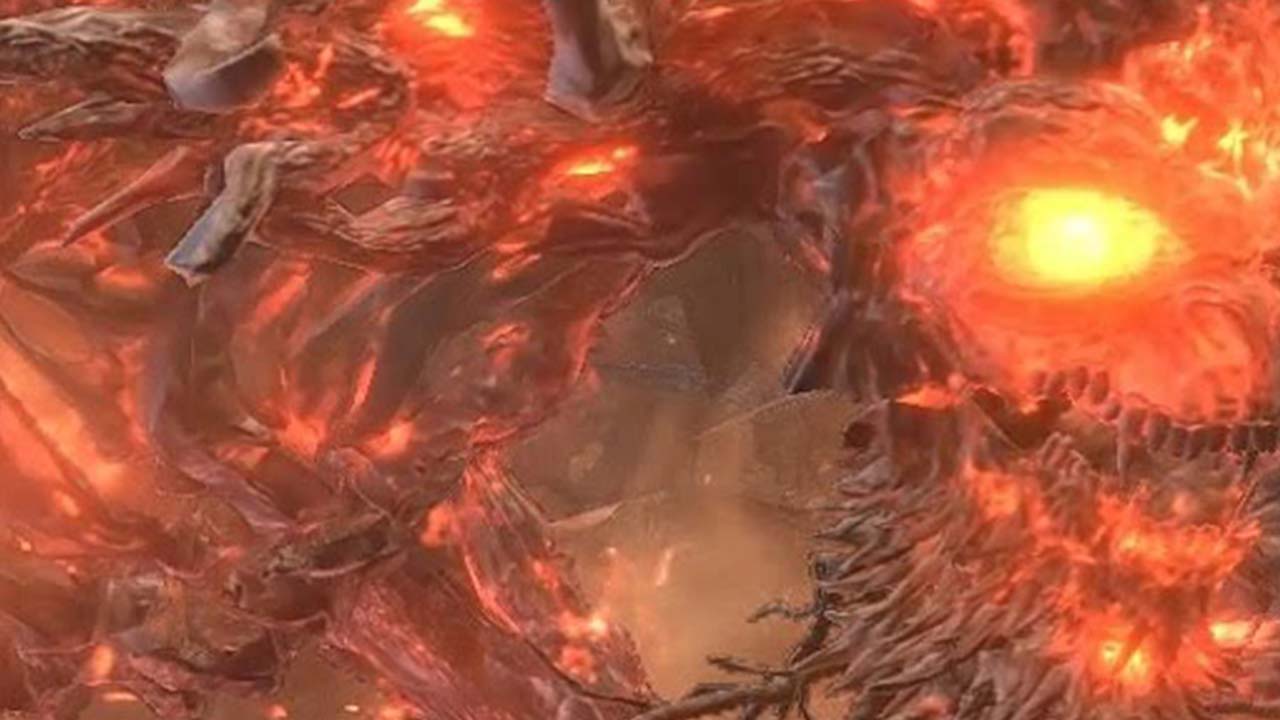 To access a nearby optional area, head back to the suspension bridge from the High Lord Wolnir bonfire, but do not cross the bridge. Instead, cut the bridge ropes on your side (one swing will do it). This will make the bridge collapse, creating a ladder you can descend, leading you to another area of the catacombs. 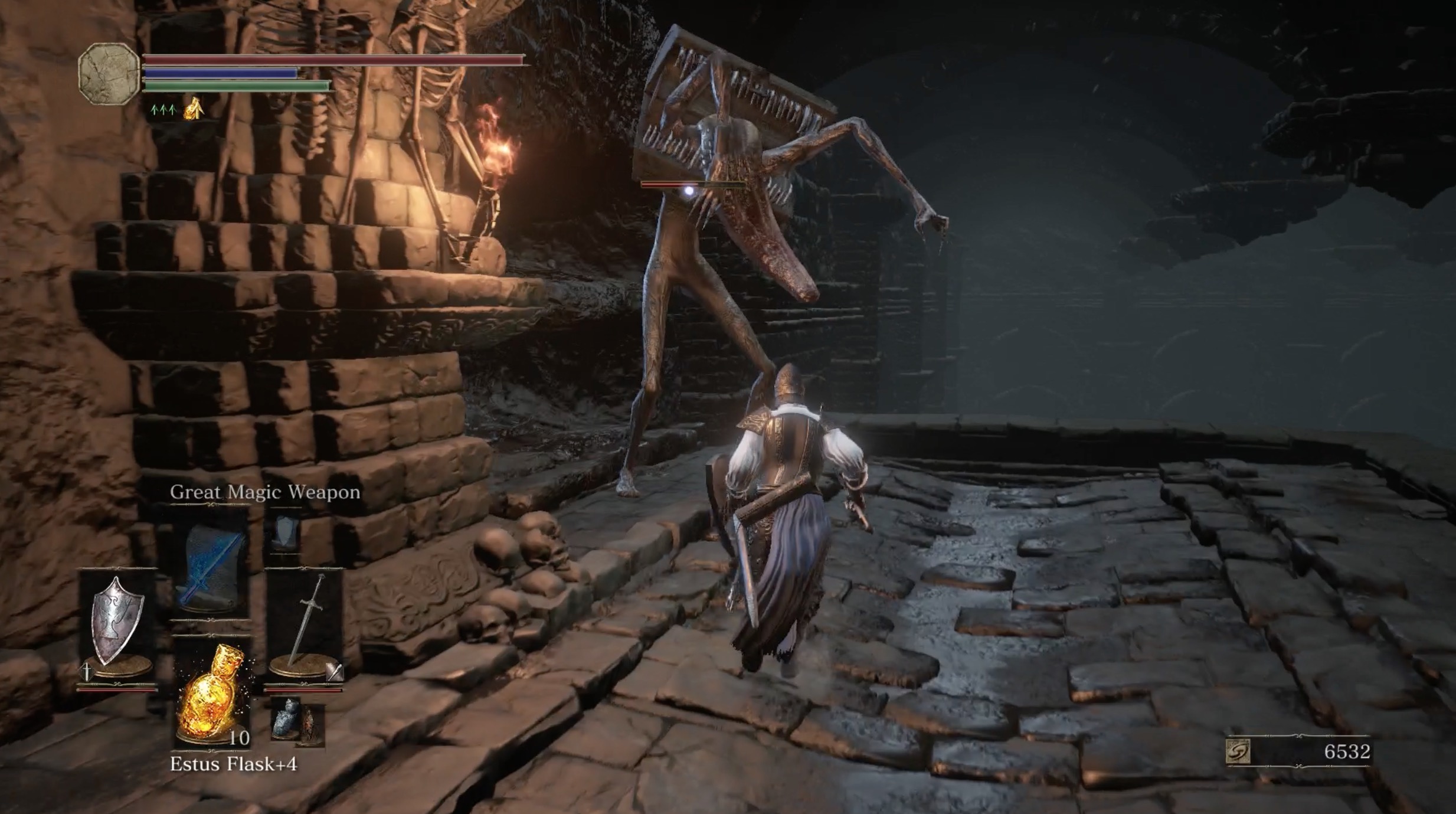 When you've reached the bottom, head down the path and into the large three-tiered room with the Demon and several skeletons. The other side of the top tier includes a Mimic, which will drop a Black Blade when you kill it or when you bait it to run into the Demon’s flames. Head through the doorway at the bottom tier and take the next right to reach the next bonfire.

Head past the bonfire to reach the Smouldering Lake. Grab three Large Titanite Shards around the center of the lake. 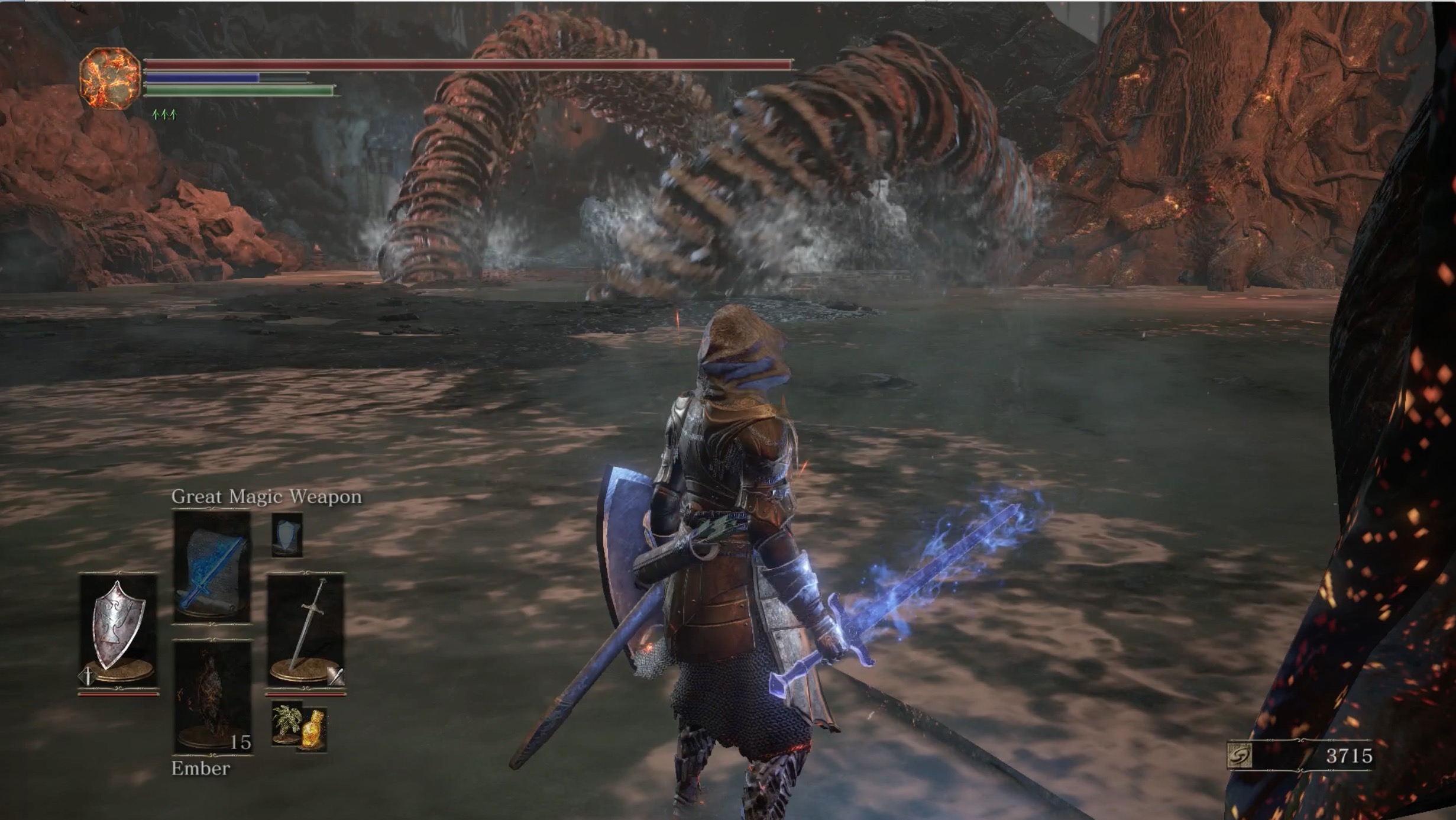 Veer to the left of the lake, while being mindful of the massive ballista attacks aiming at you. You will also come across a large Carthus Sandworm. It’s burrowing ability makes it a tough opponent if you’re using melee attacks. You should either rely on ranged attacks or come back to it later when your levels are high. Killing it will give you a Lightning Strike and an Undead Bone Shard. You should see another foggy doorway leading to another boss in the distance. Grab the Shield of Want along the way. You can choose to take on the boss, Old Demon King, or you can make a right near the doorway and go up the path. This will lead to you to another bonfire, which is a more convenient respawn point for the boss fight.

There's another passage on the other side of this room with the bonfire. When you emerge from the passage, you’ll face off against a couple Demon Clerics. Their frequent use of fireballs pose a challenge because some function as satellite fireballs that shoot their own fireballs. In other words, the quicker you deal with them, the better. The first Demon Cleric will be on your left when you emerge from the passage. Grab the Soul behind it. 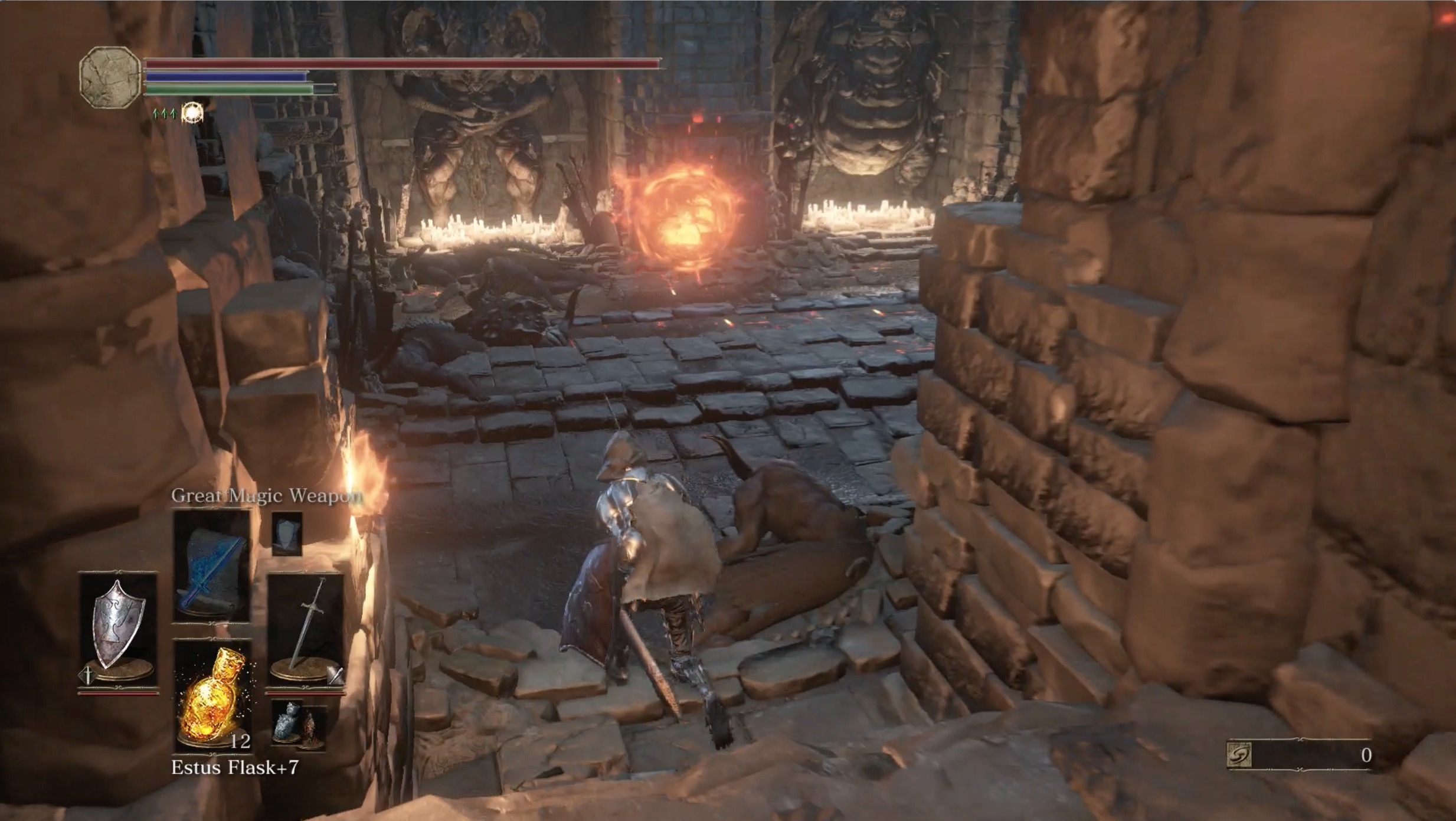 Head down the stairs that’s right of the Demon Cleric, then make a right at the lower area, which happens to feature another Demon Cleric. Make the next right, taking on the Hound-rat along the way. Make another right and deal with yet another set of Hound-rats. Hit the wall opposite the doorway you came out of. The wall will disappear, revealing an L-shaped path to a Quelana Pyromancy Tome. Return back to the room with the Hound-rats and make a right. 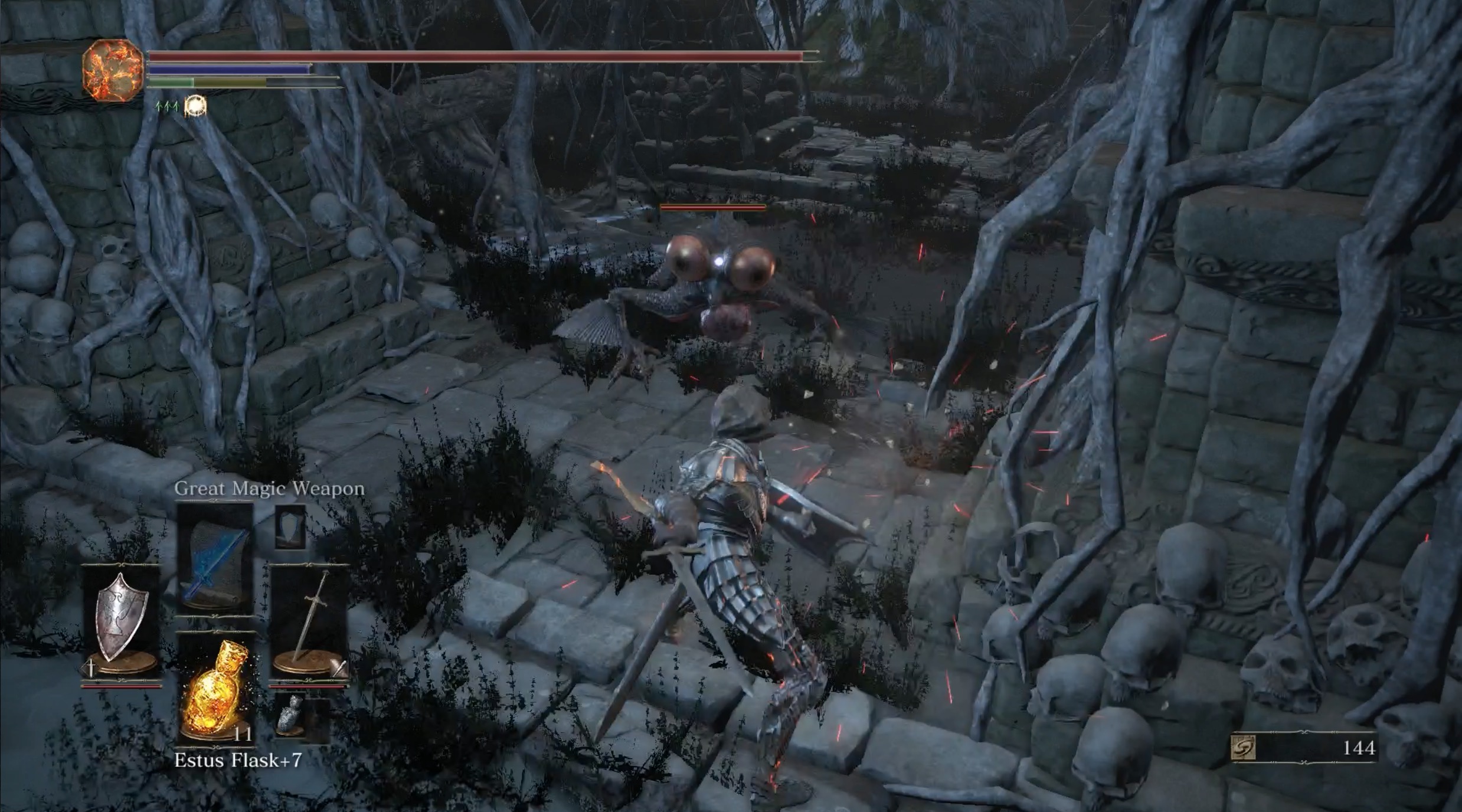 Go down the hallway and make a right. Be ready to take on four Basilisks and their curse mist. Three of them are huddled around a Titanite Shard. To the right of the Basilisks is an Izalith Staff. After picking up those items, make a left from the Basilisk huddle. 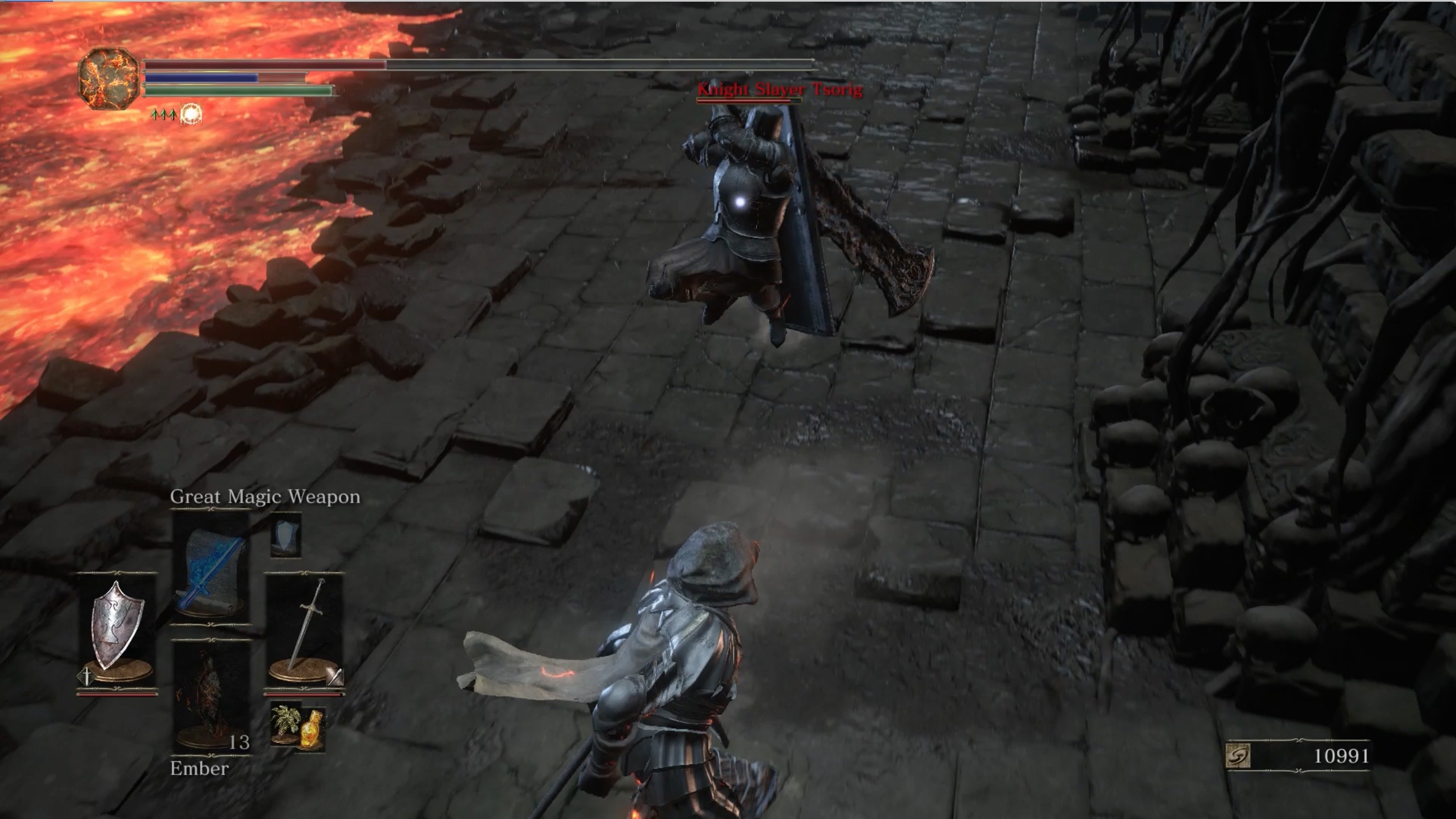 Take the next left, then down the stairs. Be ready for a tough duel against Knight Slayer Tsorig. He’s skilled with a Greatsword so try to avoid its wide arching frontal attacks. Rather than fight him on the stairs, go down to the lava level. There’s more room to move around and you can potentially lure him into the lava, if you don’t mind using it as a cheap tactic. Tsorig will drop a Fume Ultra Greatsword and a Black Iron Greatshield. There are items in the lava as well: a Sacred Flame and a Soul. If you are equipped in flame-resistant gear or if you don’t mind killing yourself in the lava, these items are worth the pick up. 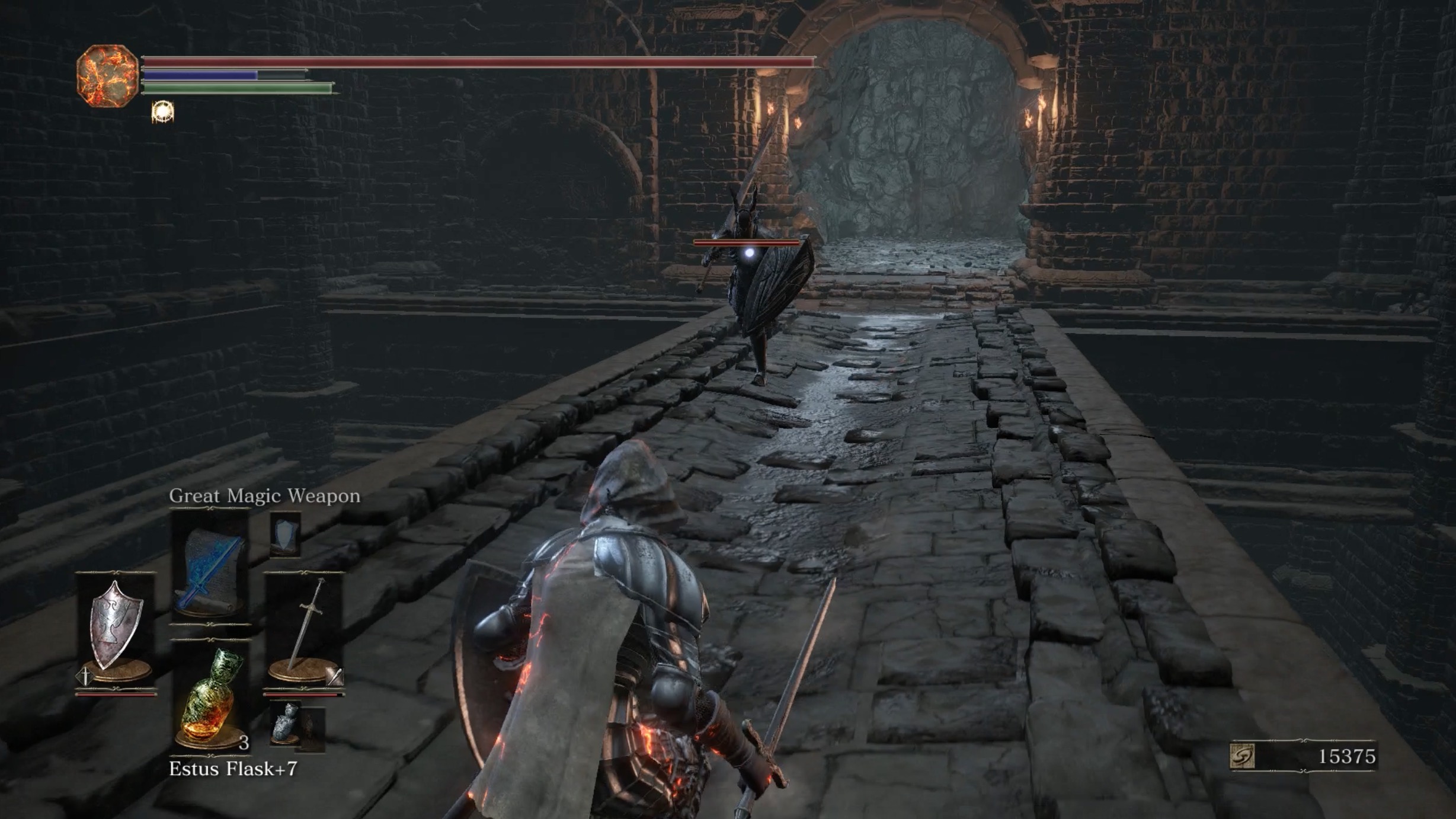 Return to the hallway, which leads to the Basilisks on the right. Make a left instead and up the stairs, then make a right. This will put you on a bridge above the lava area you just visited. A Black Knight will approach you from the other end of the bridge. The knight behaves like most other swordsmen and if you’re adept with your sidesteps, you can bait the knight into falling off the bridge and into the lava. Before leaving the area, grab the Soul on the right. 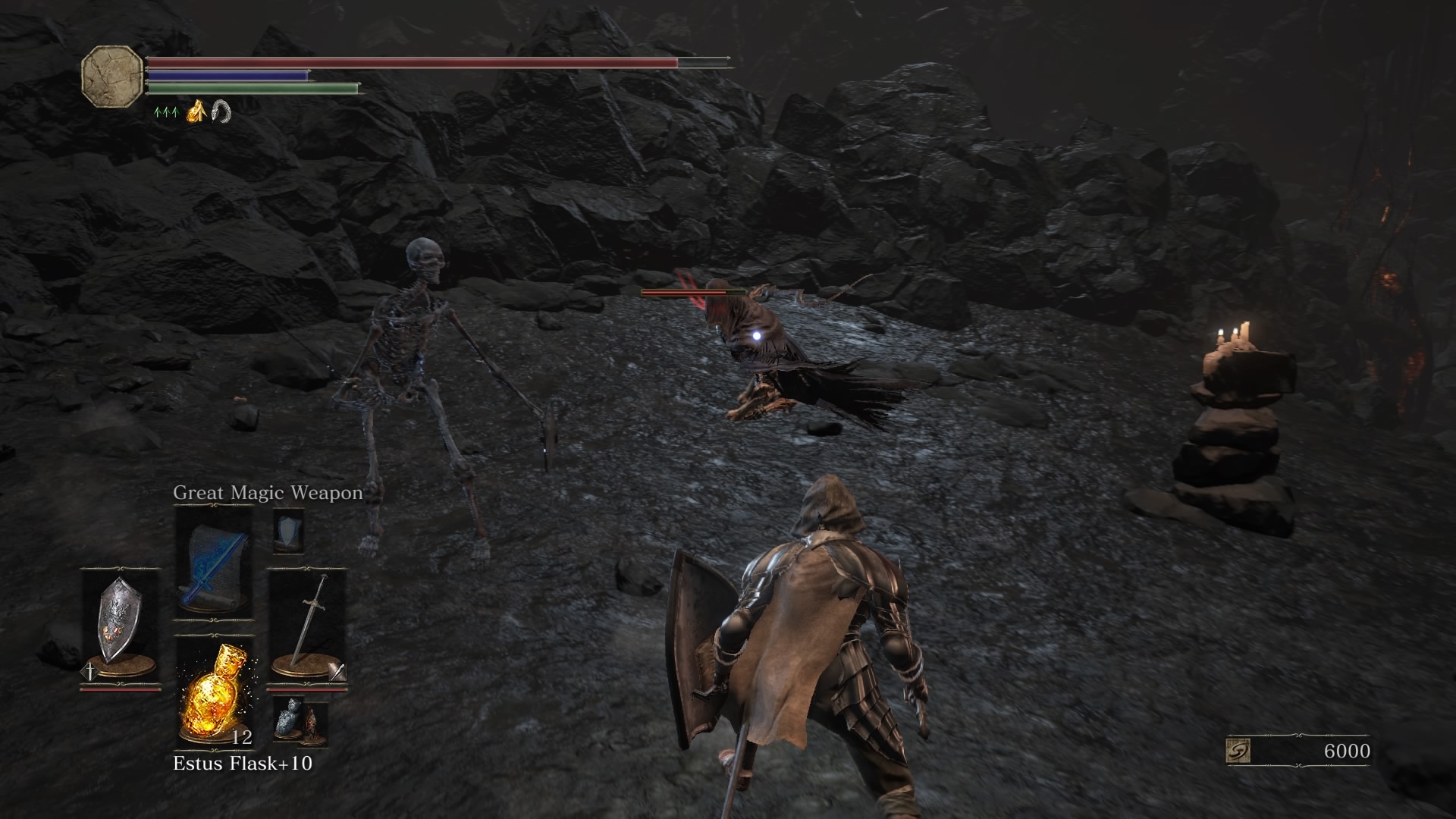 This path will lead to the upper section of the lake with the ballista. Take your time dealing with the Skeleton Wheels, Skeletons and Skeleton Swordsmen. When you reach the ballista, use the crank to deactivate it. Use a Homeward Bone to fast travel back to either the Demon Ruins bonfire or the Abandoned Tomb bonfire if you wish to explore the Smouldering Lake further. 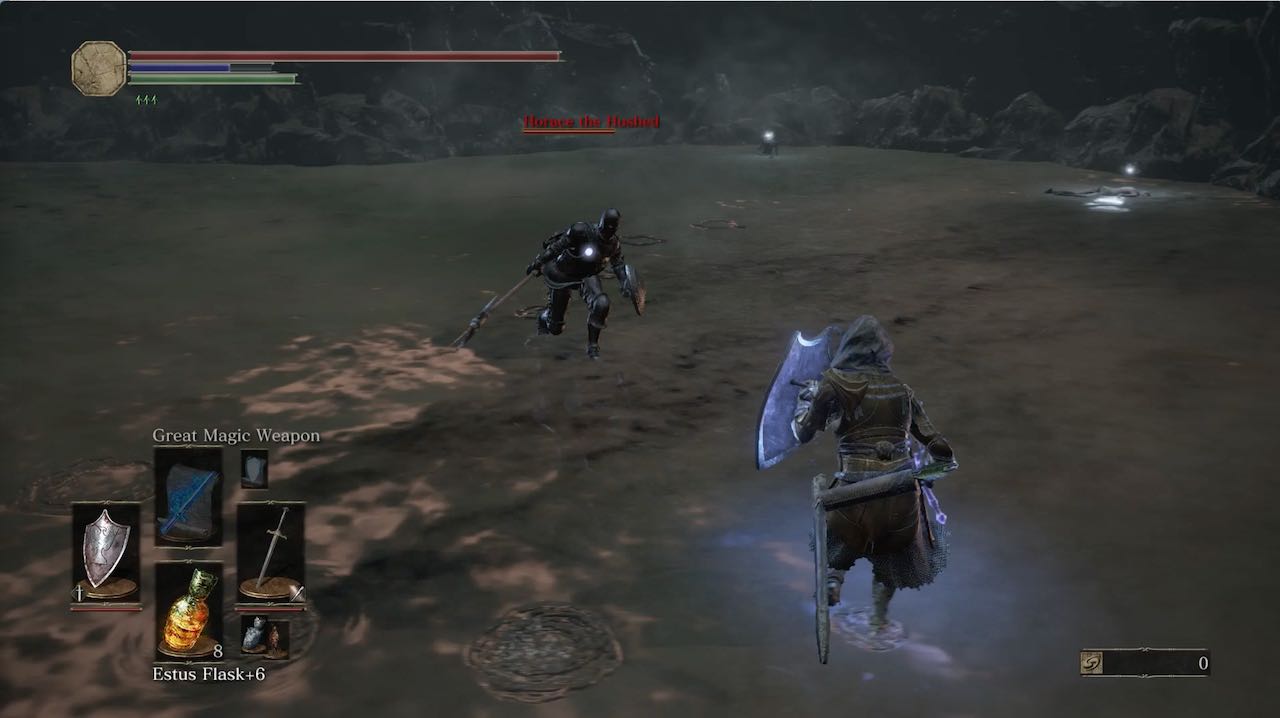 To reach another bonfire, travel back to the Abandoned Tomb bonfire. Go toward the Smouldering Lake and explore the right side of the lake. Grab the Chaos Gem in the open area patrolled by the Great Crabs. There is also a cave nearby with two Crystal Lizards and (depending on your prior interactions with NPC) Horace the Hushed, who will drop the Llewellyn Shield. This cave also includes two Large Titanite Shards and two Yellow Pug Pellets. 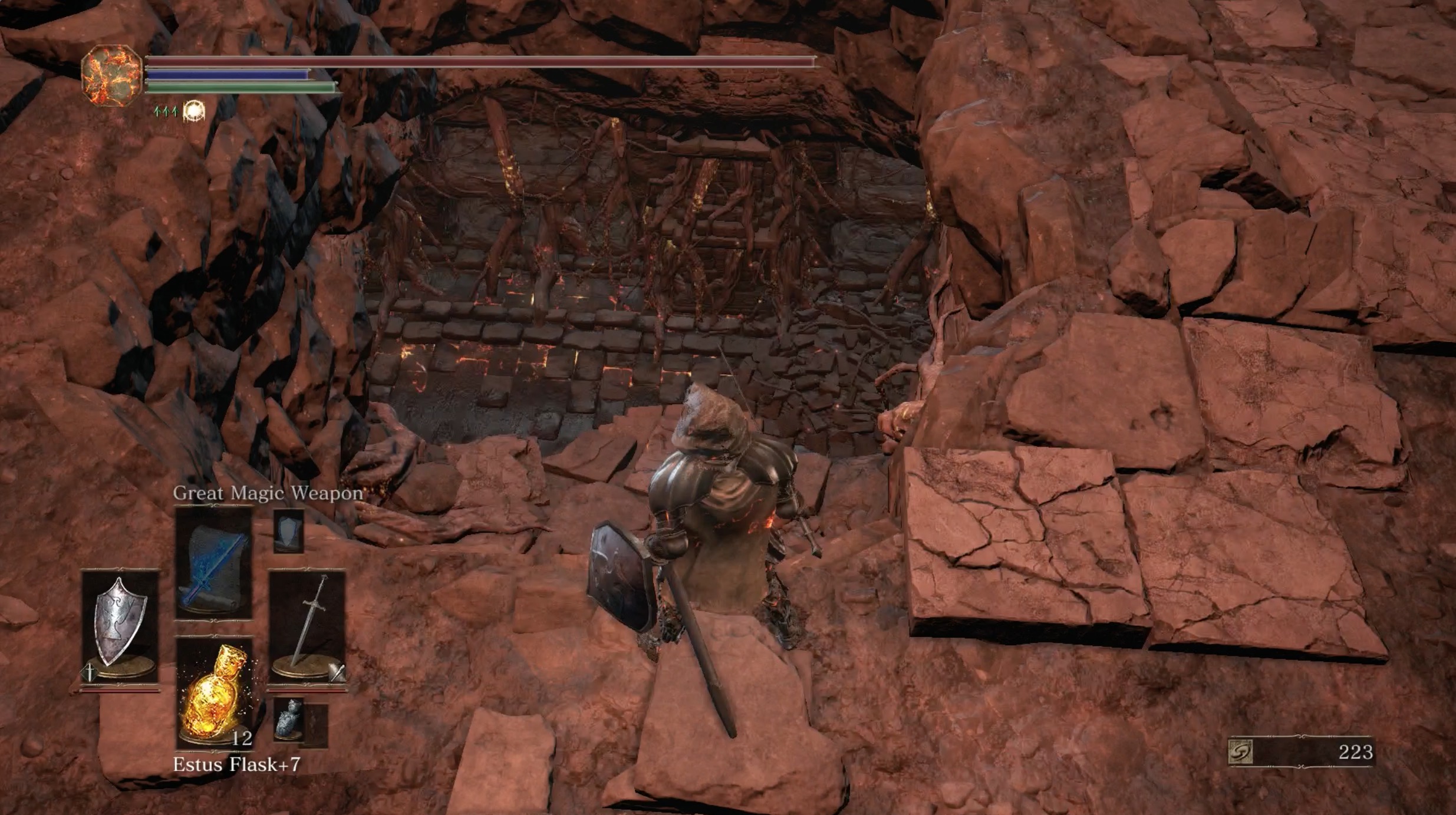 While exploring this right side of the lake, you should eventually come across a hole in the ground (created by the ballista). Drop the down the hole after you've explored this section of the lake thoroughly. While dropping from the middle ledge, make a left and head down the passage, make another left and take out the Crystal Lizard. Return to the intersection below the hole you dropped from and continue down the opposite end of the hallway. Take on the Demon Cleric and make another right.

To reach another bonfire, travel back to the Abandoned Tomb bonfire. Go toward the Smouldering Lake and take a slight right into the lake. You should come across a hole in the ground. Drop the down the hole. While dropping from the middle ledge, make a right. Take on the Demon Cleric and make another right. 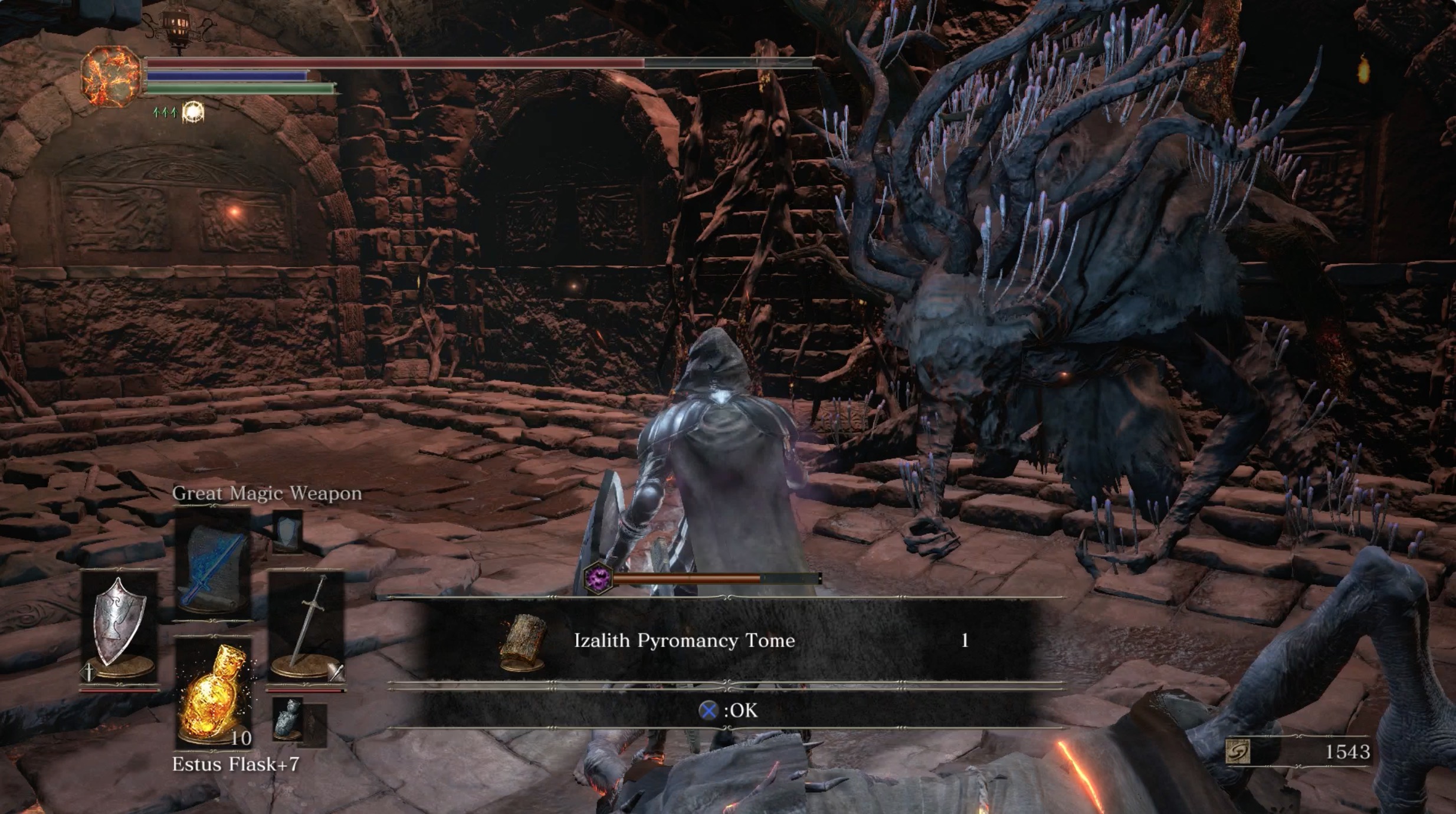 You’ll have to face three Smouldering Ghru’s in this room. They’re not much different from the regular Ghru’s except that they can deal poison and toxic damage. After the battle, grab the Izalith Pyromancy Tome from the back of the room. 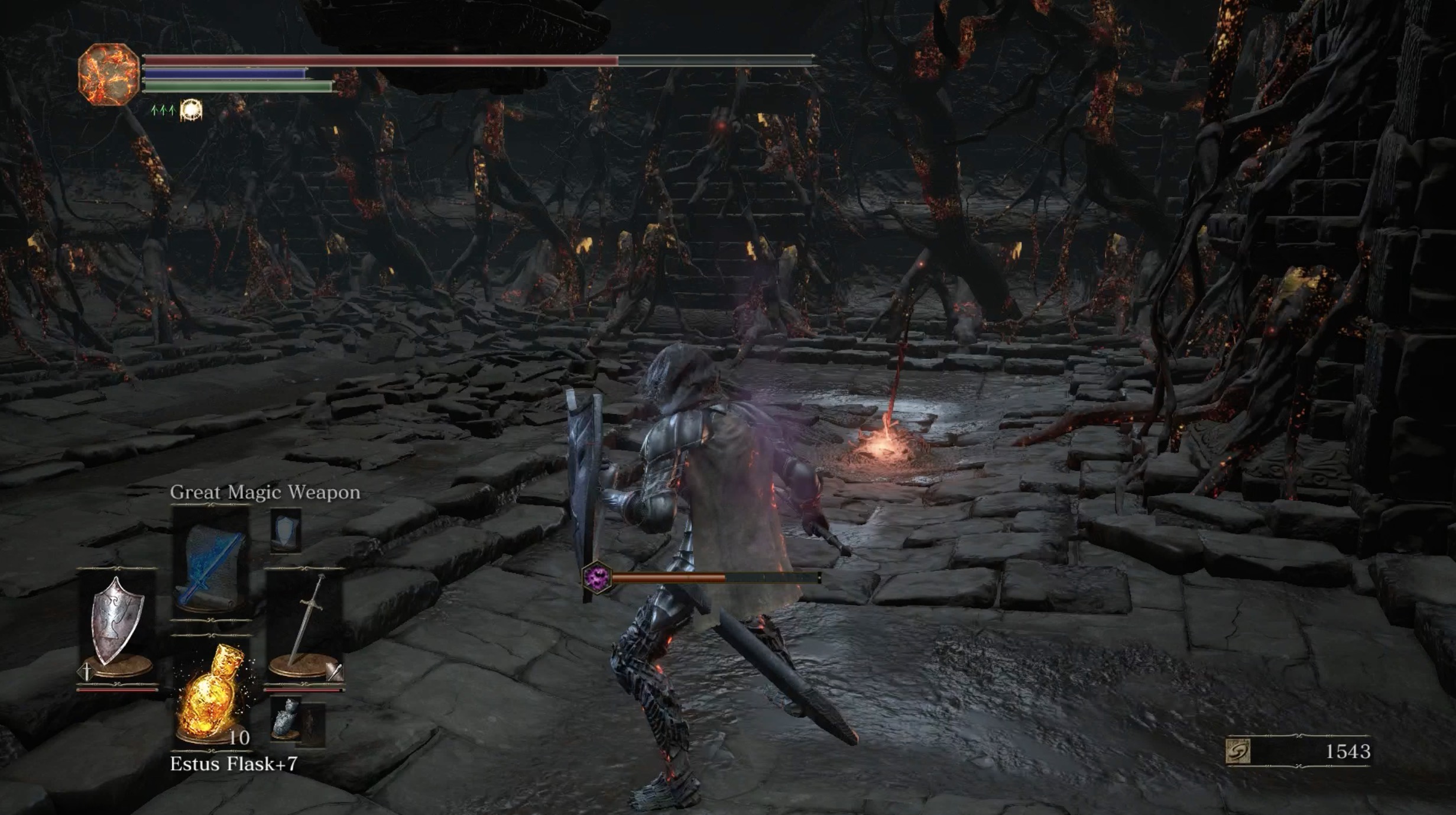 Leave the room and head straight. When you enter the next room, look right for the bonfire.

Look for a wall with an arch at the opposite corner of the bonfire room. Hit the wall to make it disappear. Explore this new passage by making the next left, where you'll find an Estus Shard at the end of the hall. Return to the bonfire and take the passage down the stairs. Take the immediate right and make another right into the dead end. Kill the Ghru behind you and grab the Ember. After leaving the dead end hallway, make a right, then a left into the open area. Defeat any Ghrus who might be lingering. Take the short passage on the right into another room with two Ghrus and two Demon Statues. 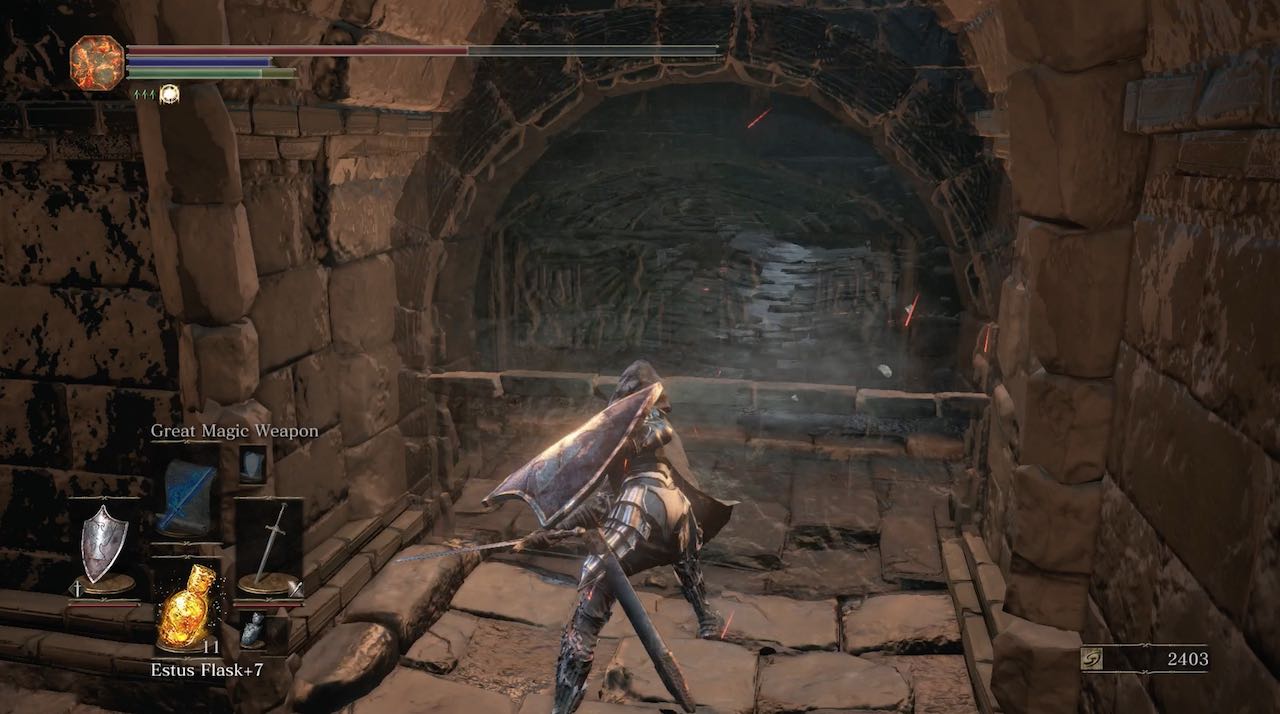 Get behind the demon.

As with many of bosses in Dark Souls 3, the Old Demon King's weakness is its back. You can also try to get under it, but its club attacks can harm you from all distances, even up close. For mages and ranged attacks, the boss is smart in tracking your movements when it uses its long-reaching fire breath, so some zig-zagging helps. Of the boss' two sides, its right side is most vulnerable, especially since its wide arch attack with its club mostly encompasses its left side. The Old Demon King also uses a 360-degree fire vomit attack but it's easily avoidable since the fire spreads out in individual lines, creating safety gaps in between the lines as the fire spreads outward. Lastly, if you find yourself pulling off a four-hit combo with no resistance, that means it's about to unleash a shockwave, so either roll back or have your shield up.

Speed with combos is recommended during this phase as the Old Demon King’s attacks are all the more enhanced with pyromancy. Engaging in a war of attrition is a valid tactic provided you have enough healing items to compensate for the boss’ potent flame attacks. 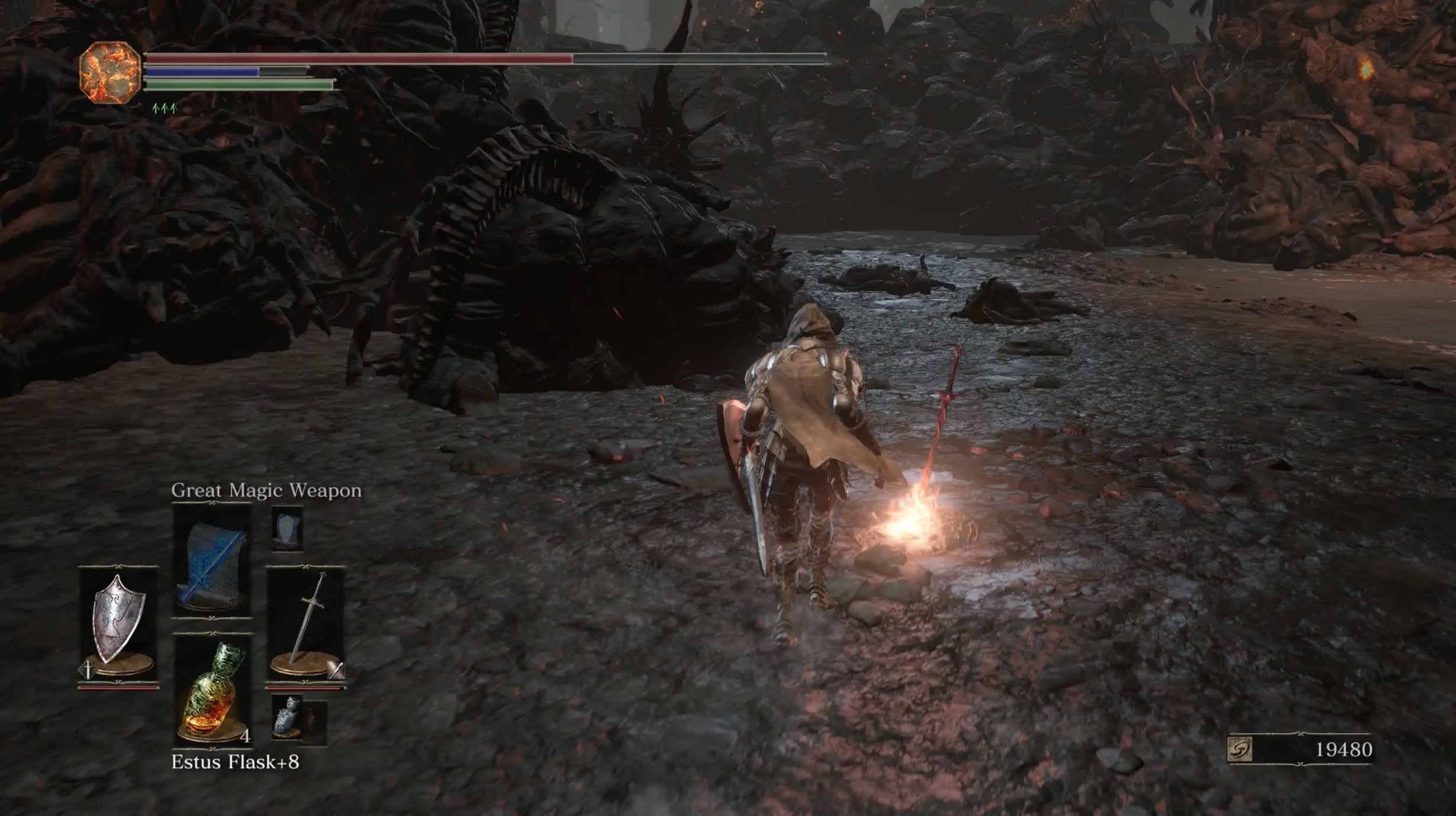 This area is a dead end but you can continue to the explore the Smouldering Lake or resume following the critical path by returning to the High Lord Wolnir bonfire.