The cramped cells and hallways of this dungeon make close quarters combat tight and tense. The only things more horrific than the disturbing character designs of some of these prisoners are the Jailers' potent attacks that temporarily decrease your health. Make it through the cells, and you'll be rewarded with more spacious — but equally challenging — sewers. 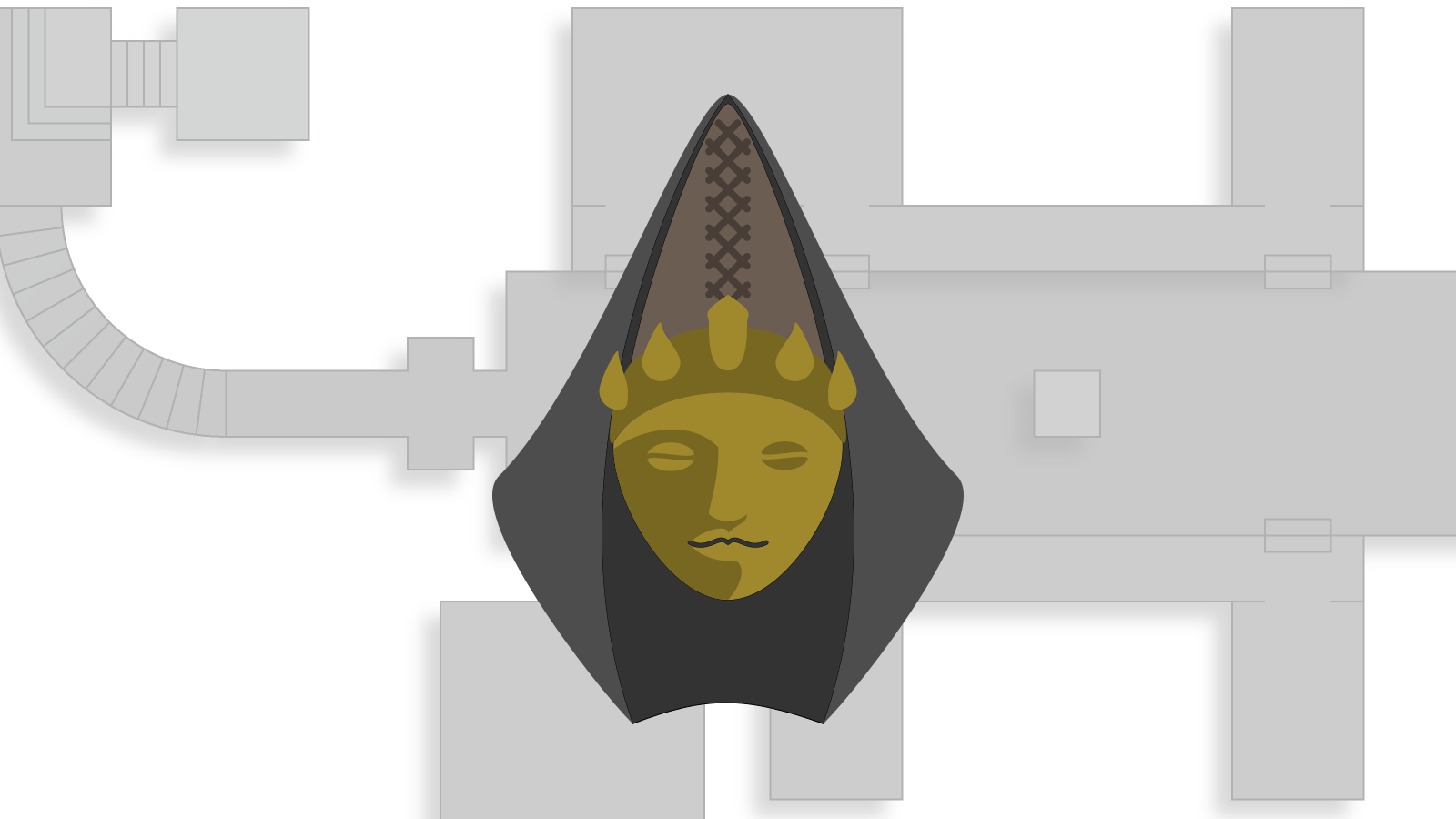 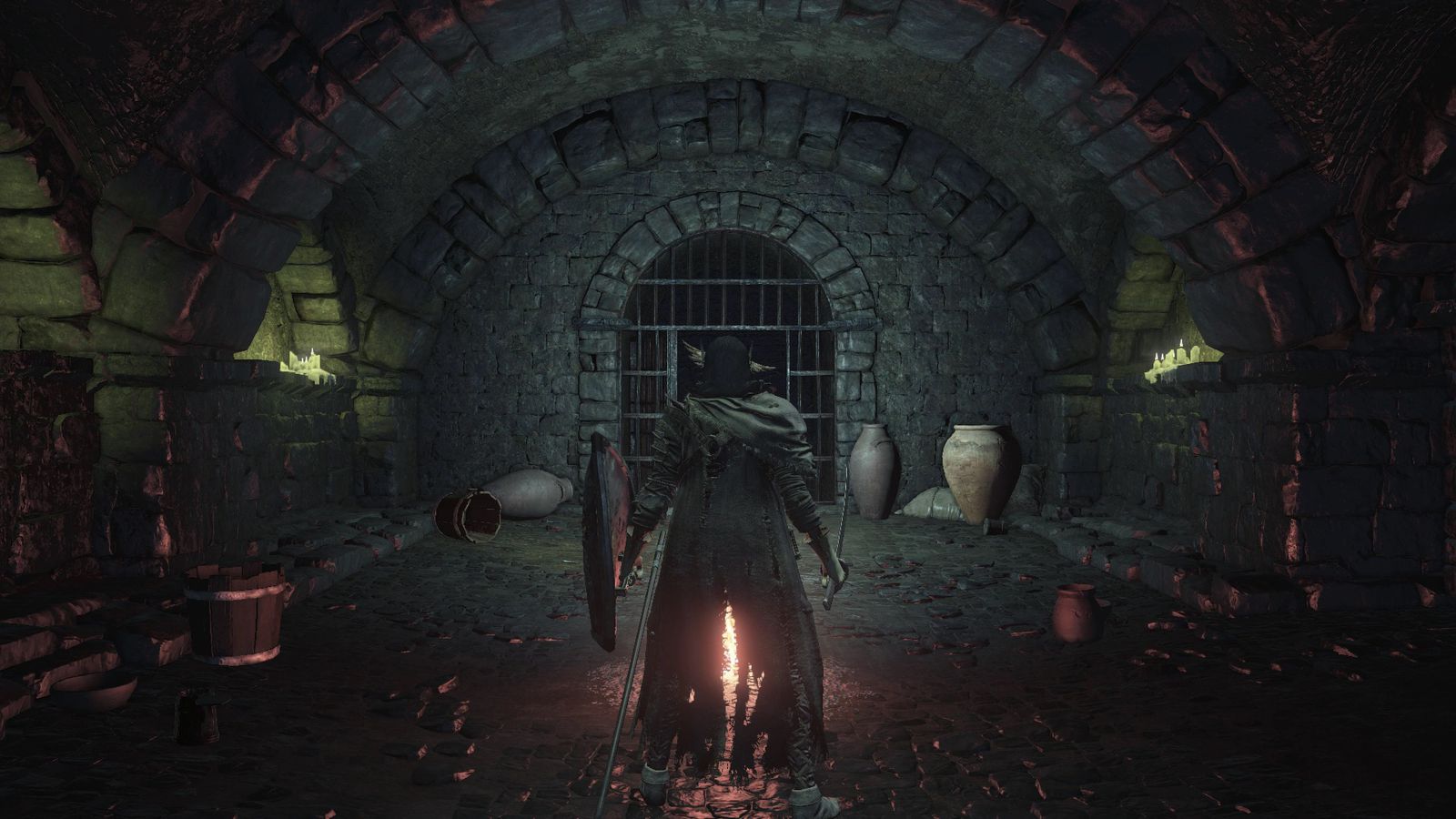 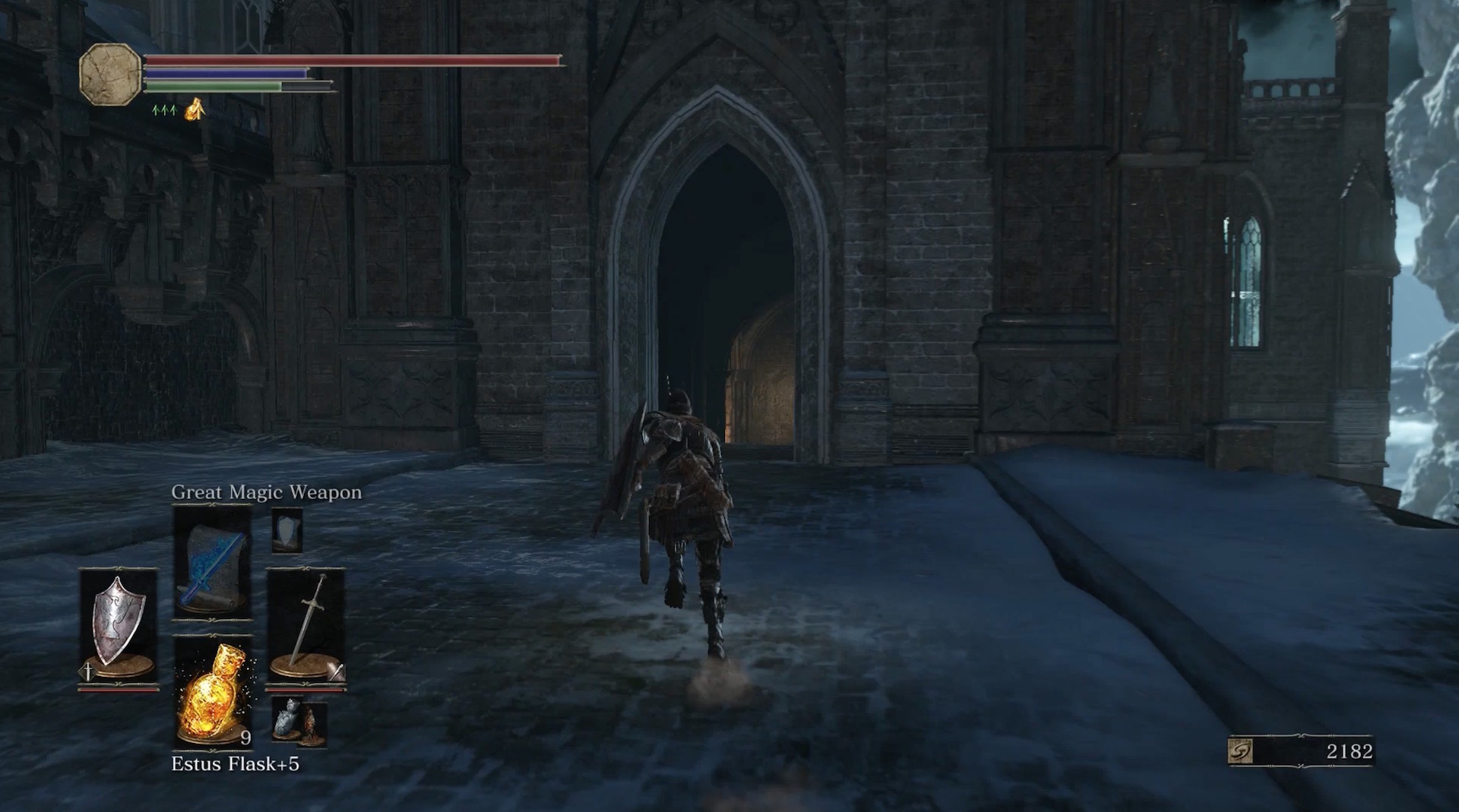 From the Church of Yorshka bonfire 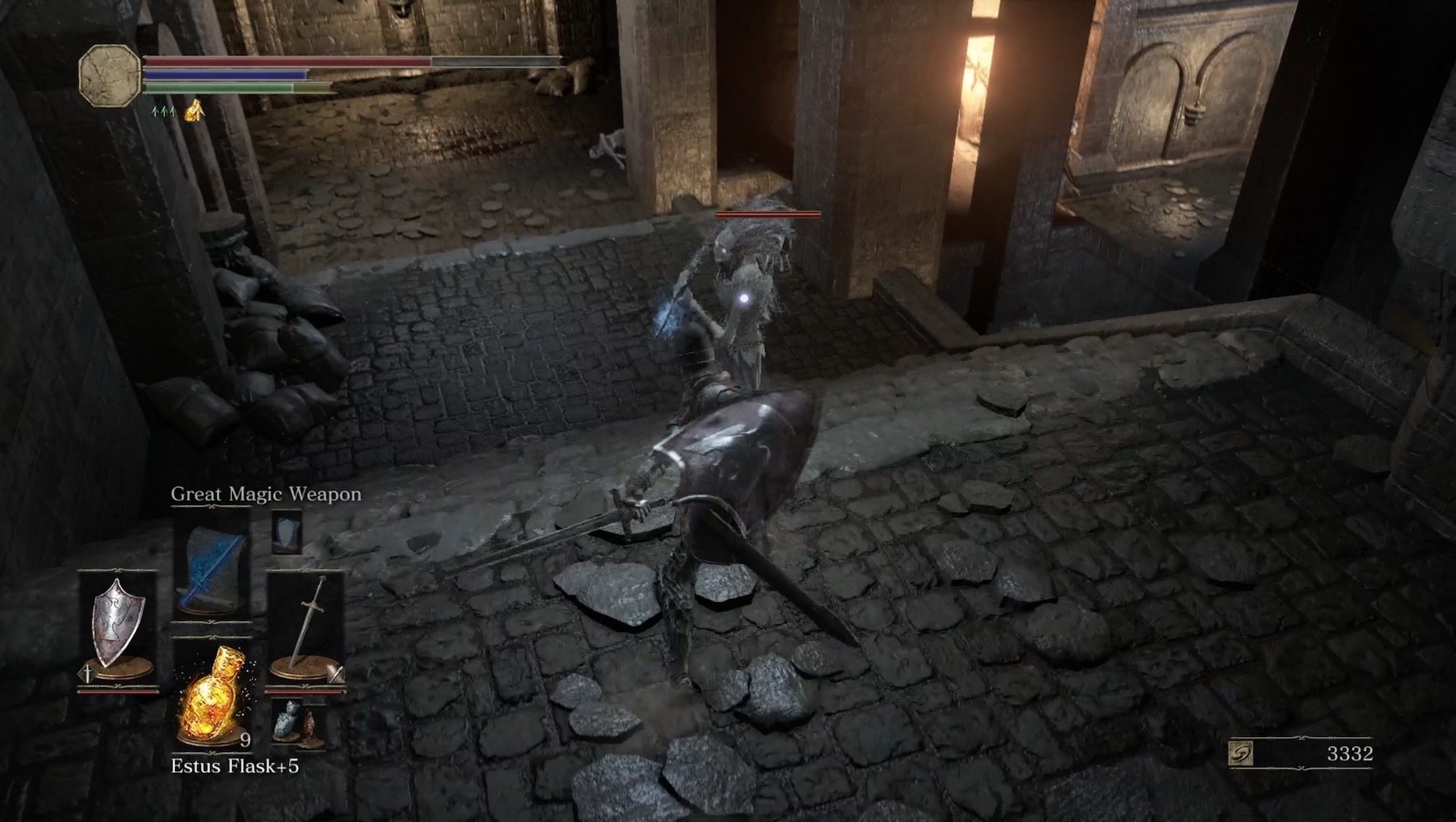 From the Distant Manor bonfire 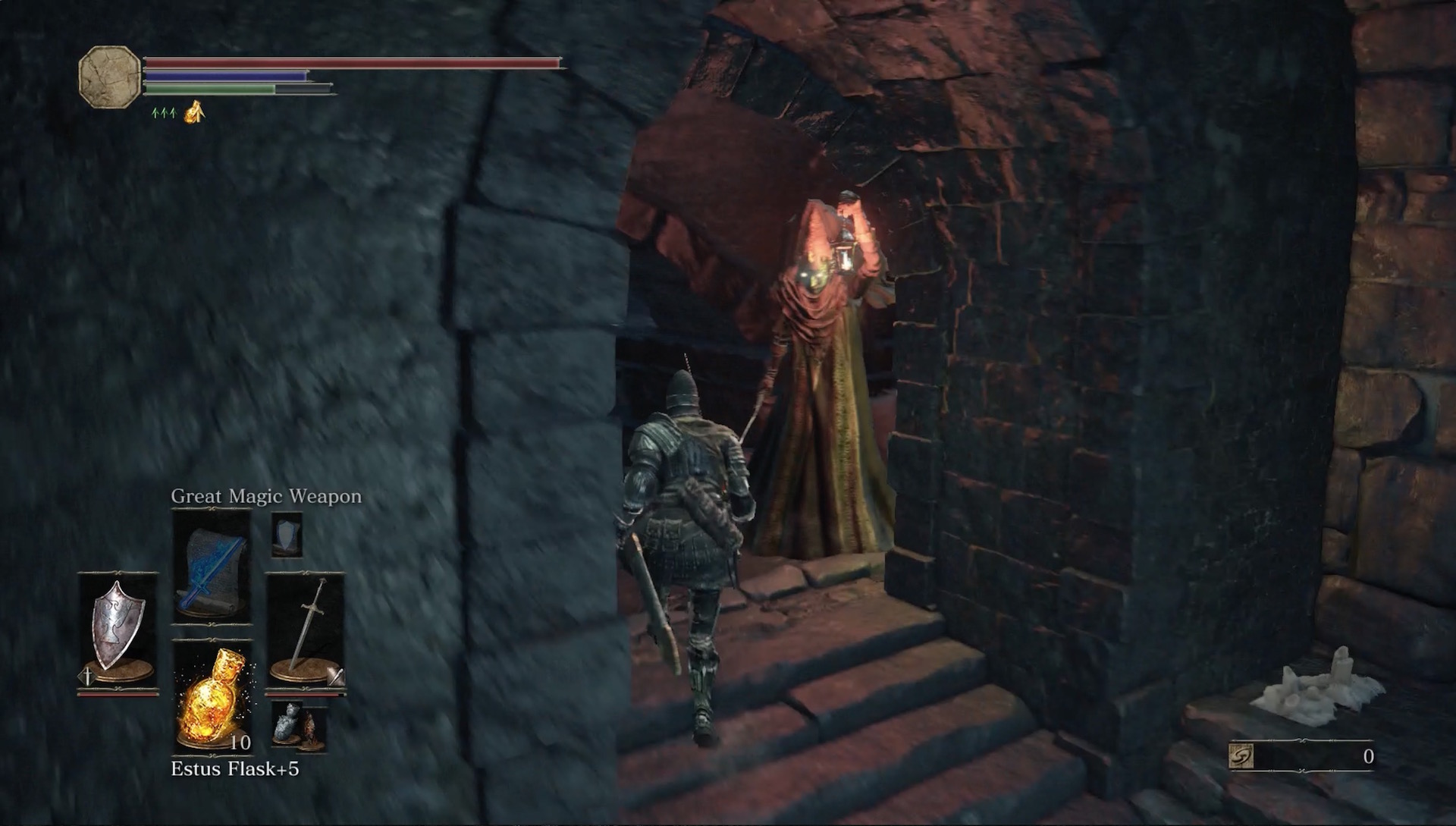 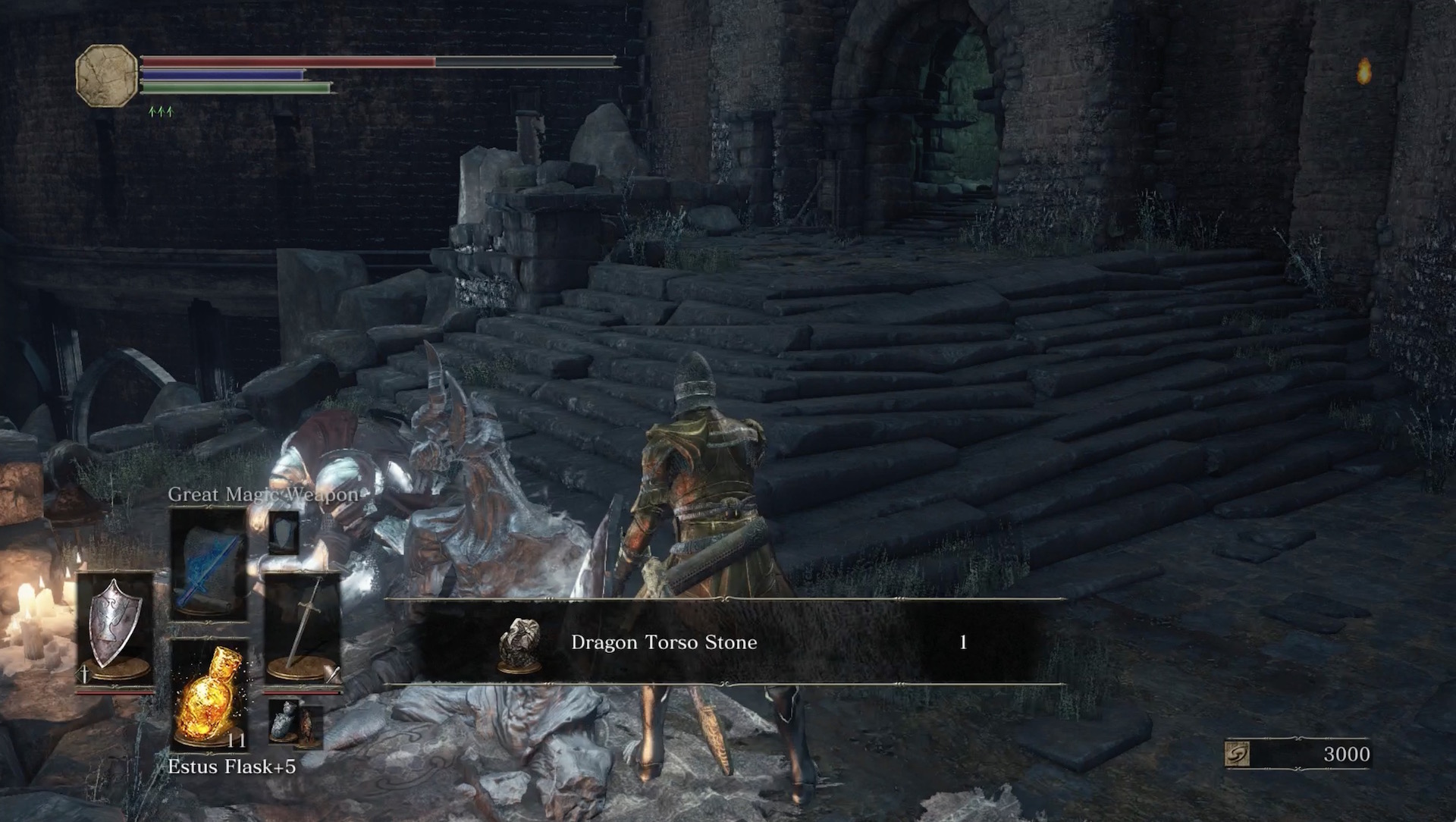 To the Profaned Capital

From the Church of Yorshka bonfire

If you haven’t reached the Distant Manor bonfire yet, fast travel back to the Church of Yorshka bonfire in Irithyll of the Boreal Valley. Head back down into the small graveyard and turn left through the alley and down another set of stairs. Veer right and head into the very large and dark storage room. Descend to the room's lower level and head to the opening along the left wall. Then head down the stairs on the left. Walk into the water and go left, passing under the bridge. As before, Sulyvahn’s Beast will reappear, unless you've killed it before. Move along the left side of the shallow lake. Instead of entering the low arch like you did to get to Pontiff Sulyvahn, keep going straight instead, through the pointed arch. Go down the stairs to reach the Distant Manor bonfire.

From the Distant Manor bonfire

Head down the stairs on the left and as you emerge into the next room, veer left to the descending stairs. Don't chase the Irithyllian Slaves since they're trying to bait you. When they turn right, turn left and take out the Pontiff Knight. Now you can take care of the Slaves as well as another Burning Stake Witch. Go through the doorway at the bottom of the room, go down the stairs and make a left at the next doorway. This will lead you to the next bonfire and the dungeon proper.

Head down the first hallway of jail cells. Grab the Large Titanite Shard in the middle cell on the left. Before you exit the hallway, take note of the locked cell on the right. Getting inside requires the Jailer’s Key Ring — we’ll be picking that up later in this area so you’ll have to come back to open it. Exit the hallway. This will bring you to the main section of the dungeon. Turn right. There's a Jailer waiting for you as you make the turn. It's best to take it out as soon as possible since it emits a mist that temporarily reduces your maximum health. Then look out for the prisoner in the open cell on your right. It will try to push you over the edge while you’re distracted in picking up the Soul on the ledge. 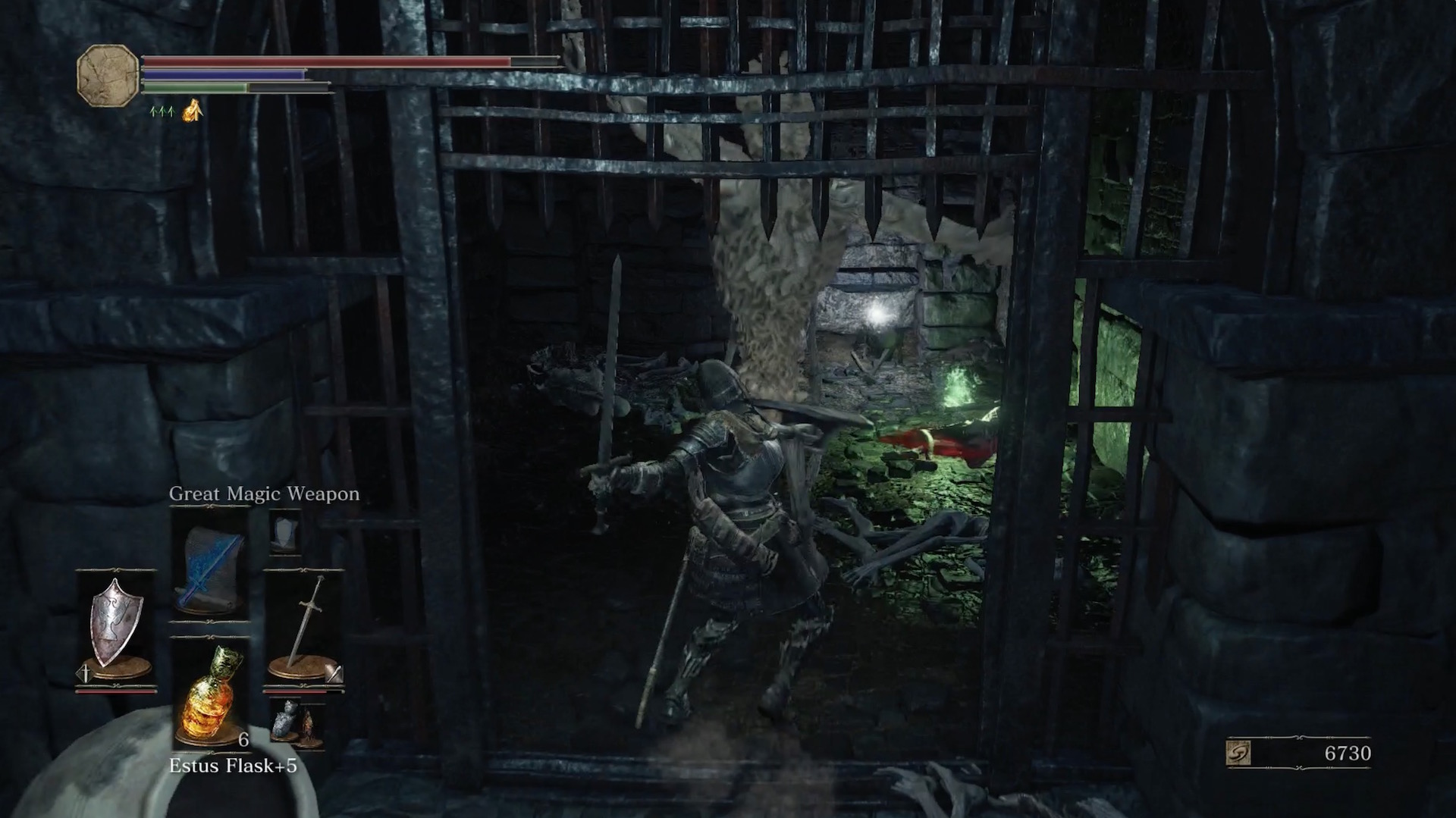 If you are pushed over, take on the Infested Corpses in the cell behind you. Then grab the Old Sorcerer’s Gear in the cell. When leaving the cell, make a right. At the end of the hallway is a Soul. There’s another Infested Corpse waiting to ambush you. When you turn around, make the next left, leading to the stairs. There are four Cage Spiders and a Jailer waiting for you. When you’re back on the upper level, make a right and grab the Large Titanite Shard at the end of the hallway. 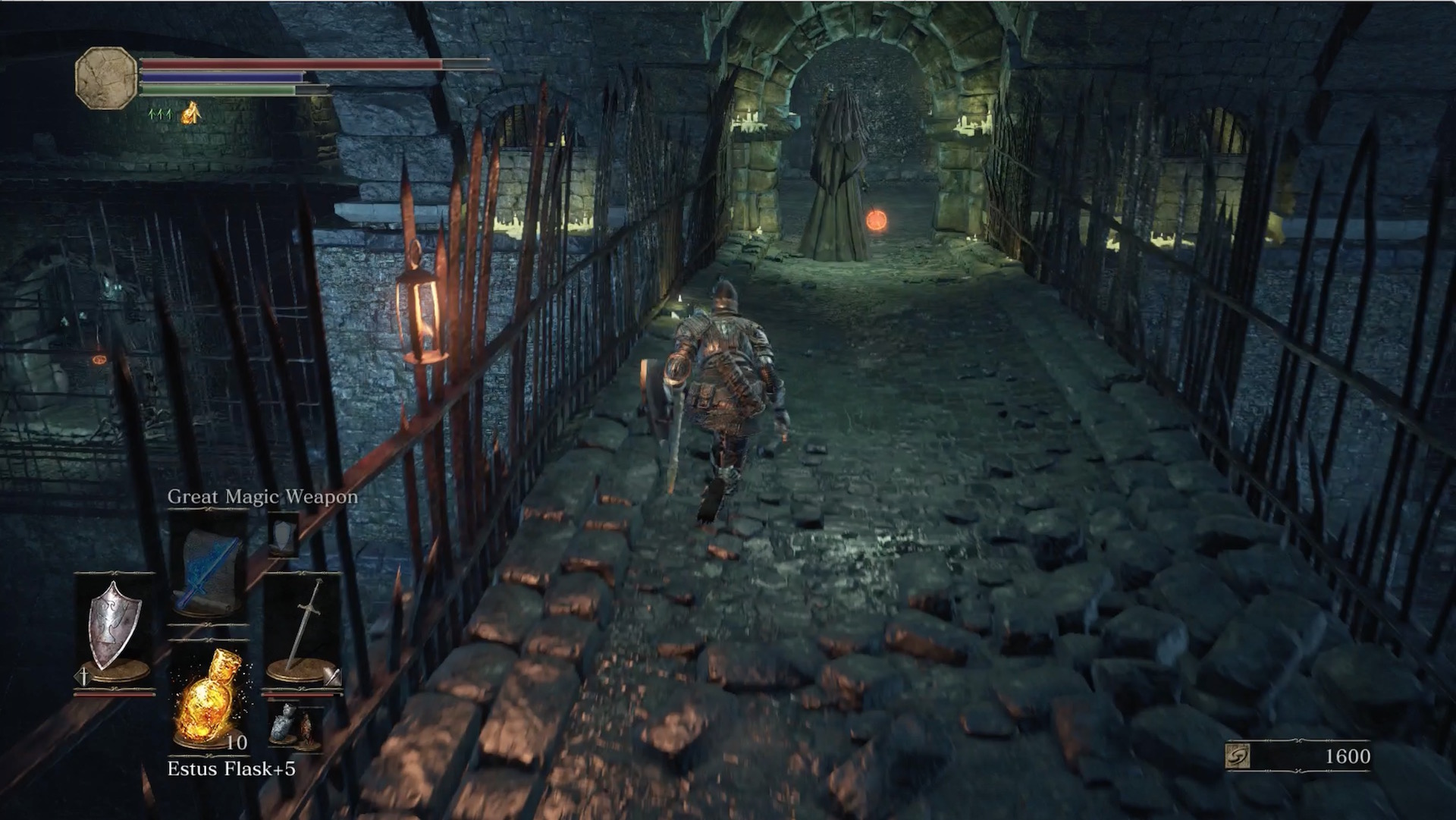 Turn around and head for the T-intersection at the middle of the hallway. Deal with the two Jailers along the way as you make a right. You'll reach another T-intersection after crossing the bridge. Make a right at the intersection and grab the Large Titanite Shard in the furthest cell while also taking care of the Reanimated Corpses and the Jailer nearby. The adjacent cell has an hole in the wall you can pass through. Grab the two Pale Pine Resins at the hole, then open the neighboring cell gate from the inside. 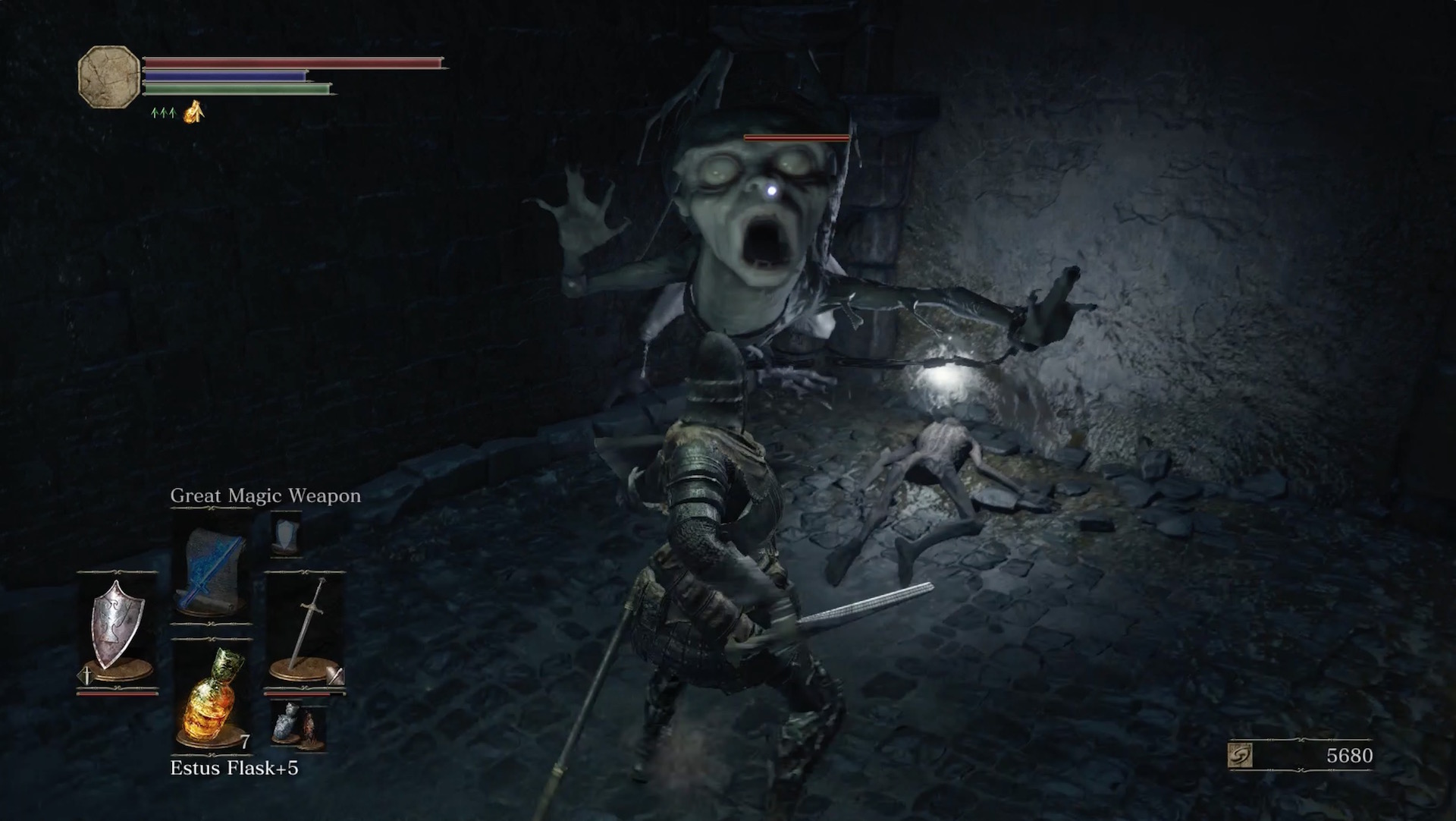 Open the gate on the left. Make a right and head to the cell that will be on your right. Grab the Jailbreaker’s Key inside. Leave the cell, make two lefts, which will lead you to the lower level, which is guarded by three Jailers and two Cage Spiders. Make the immediate left into a cell with a baby-faced Wretch inside. These creatures mostly rely on forward lunges so attacking after the lunge or flanking them are sound strategies. Grab the Simple Gem in the room. 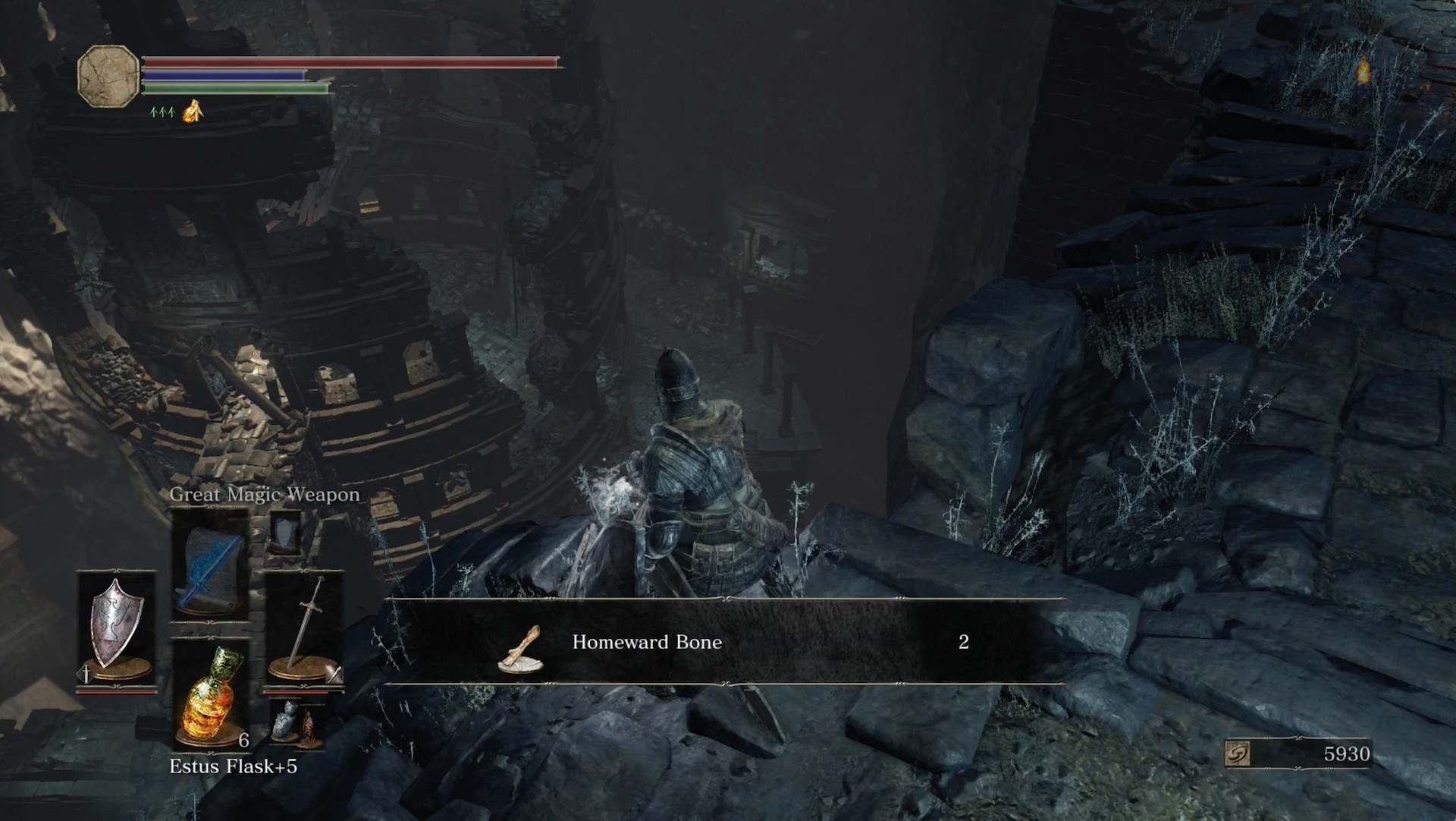 At the T-intersection, make a left and chase down the Crystal Lizard, who will drop a Titanite Scale. Watch out for the two Wretches in the cells on the left. The lizard should have led you out of the prison. Grab the two Homeward Bones at the corpse that overlooks the hollow tower in the distance. 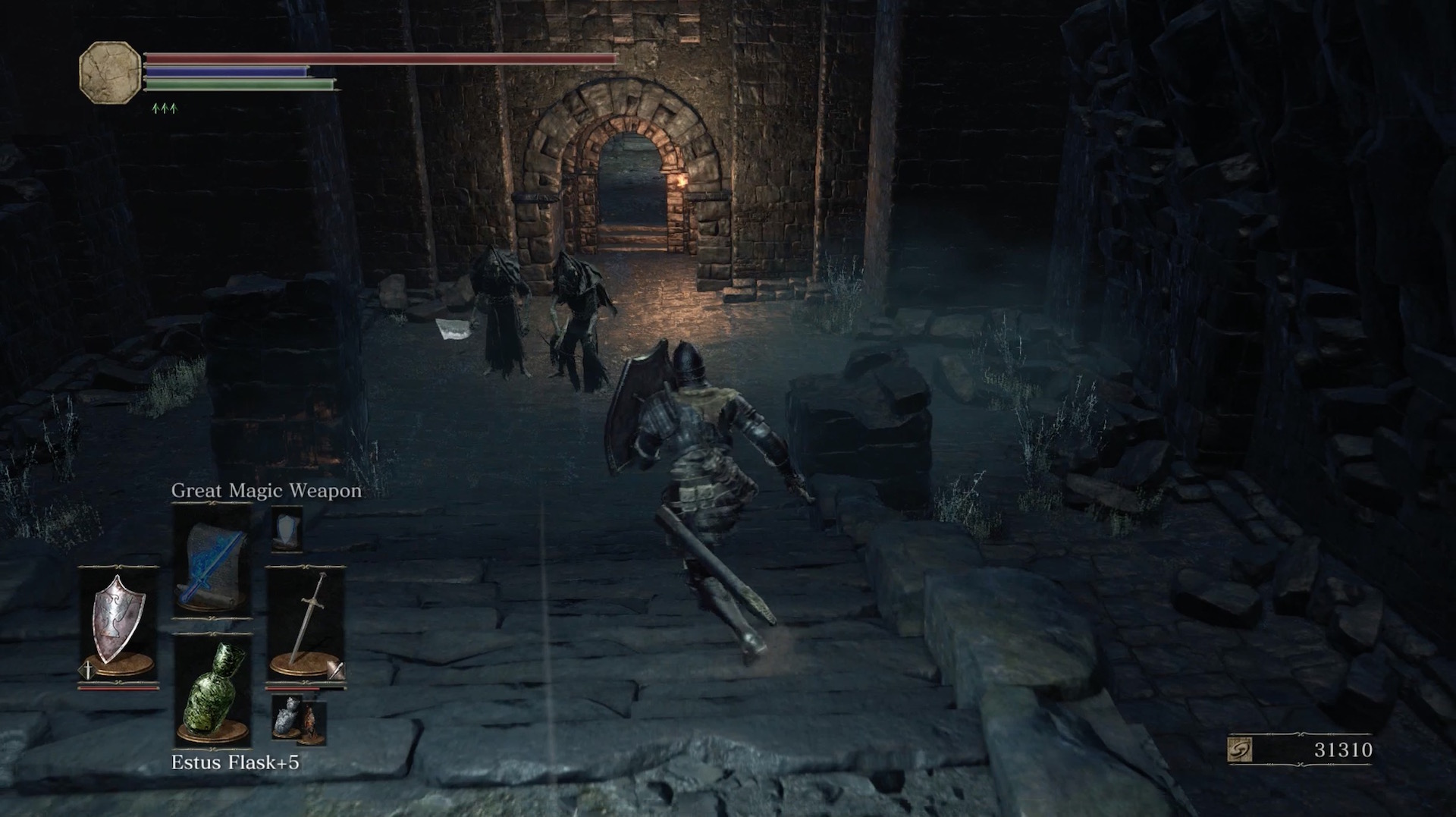 Head down the stone-tiled path. Note the glowing item, known as the Bellowing Dragoncrest Ring on the overhanging ledge above. To reach it, go back to the first hallway you reached in the dungeon, head to where the soul was at the end of the hallway and use the Jailbreaker's Key you just got.

To resume your journey on the critical path, take on the three Peasant Hollows on the stone-tiled path you were just on. Pass through the arch and attack the chest on the right to trigger a fight with the Mimic. It will drop an Estus Shard. When you go to the next room, you will be greeted by eight more Peasant Hollows. If you move down the hallway slowly, lure them toward you two or three at a time to make them more manageable. 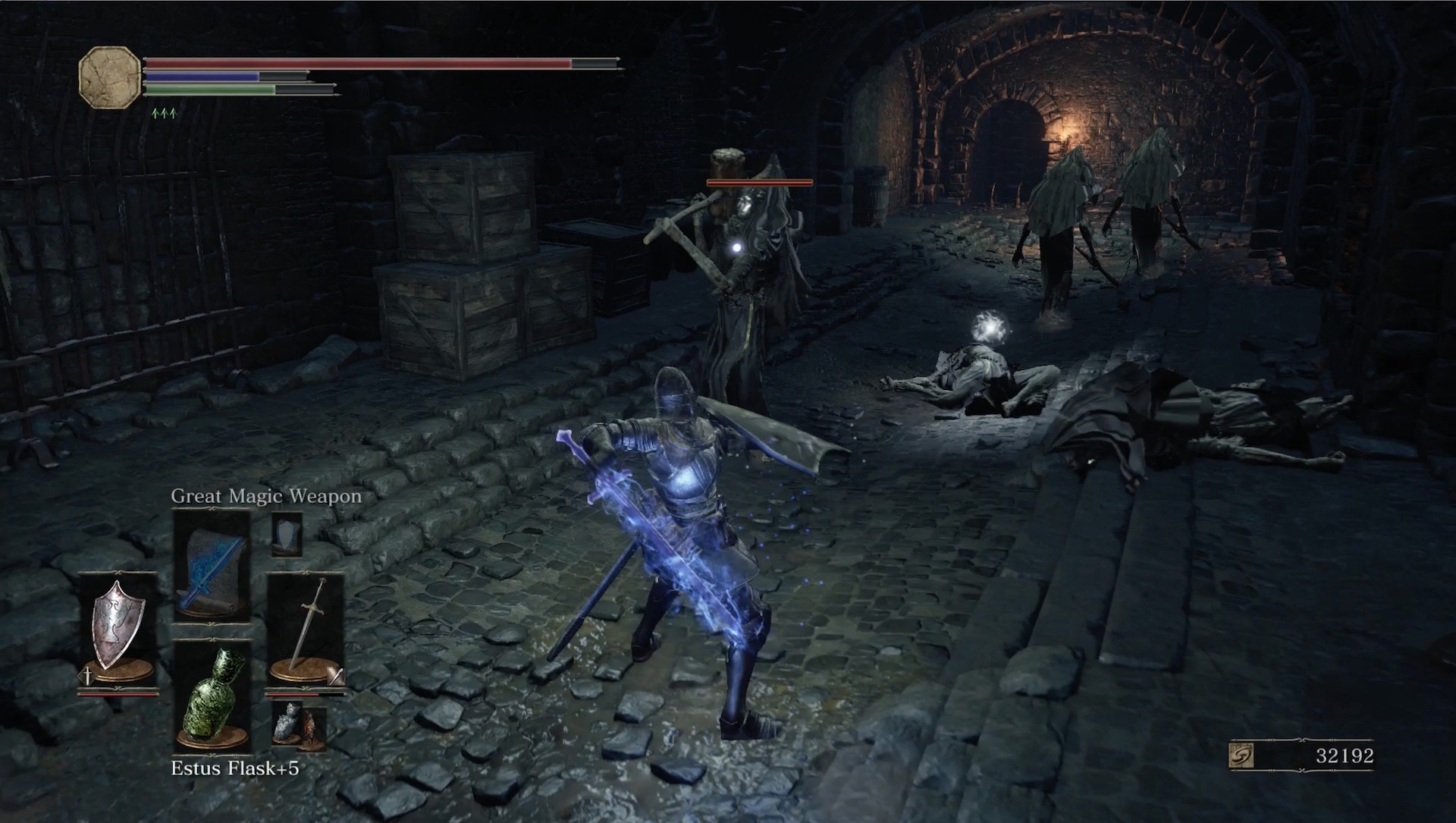 After taking care of them, head to the very end of the L-shaped hallway and drop down the hole. Head down the rocky path while being mindful of the giant on your right. Head into the sewer and take out the rats and grab the Pickaxe before the giant spots you. There are rewards to if choose to confront the giant. It will drop a Titanite Chunk and four Dung Pies, and there's also a Profaned Flame and two Large Titanite Shards at the giant's feet. While you're down here, go through the tunnel nearby and grab the ten Dragonslayer Lightning Arrows. There is also a Crystal Lizard and a Soul on the ledge at the giant's eye level. 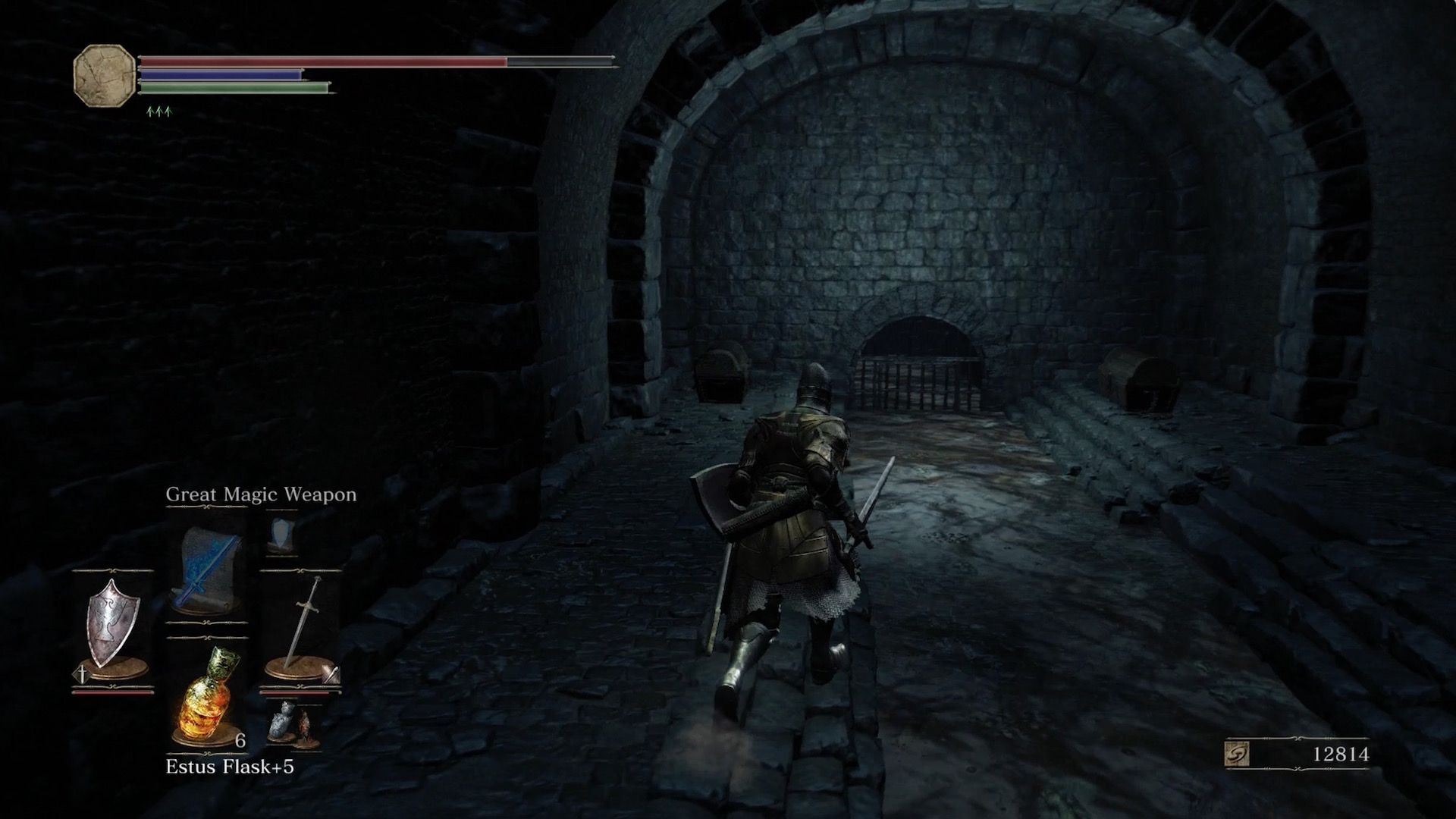 Head to the very end of the sewer, dealing with a few Hound-rats along the way. Open the chest on the right for an Old Cell Key, which you’ll be using in a few minutes in the Profaned Capital area. Opening the chest will summon five Basilisks. Dispatch them, then head back to the chests. The other chest is a Mimic that will drop a Dark Clutch Ring. Backtrack through the sewer and make the next left into the tunnel where the Hound-rats came from. You'll encounter two larger rats in the room connected to the tunnel. Grab the Dung Pie in the middle of the room. 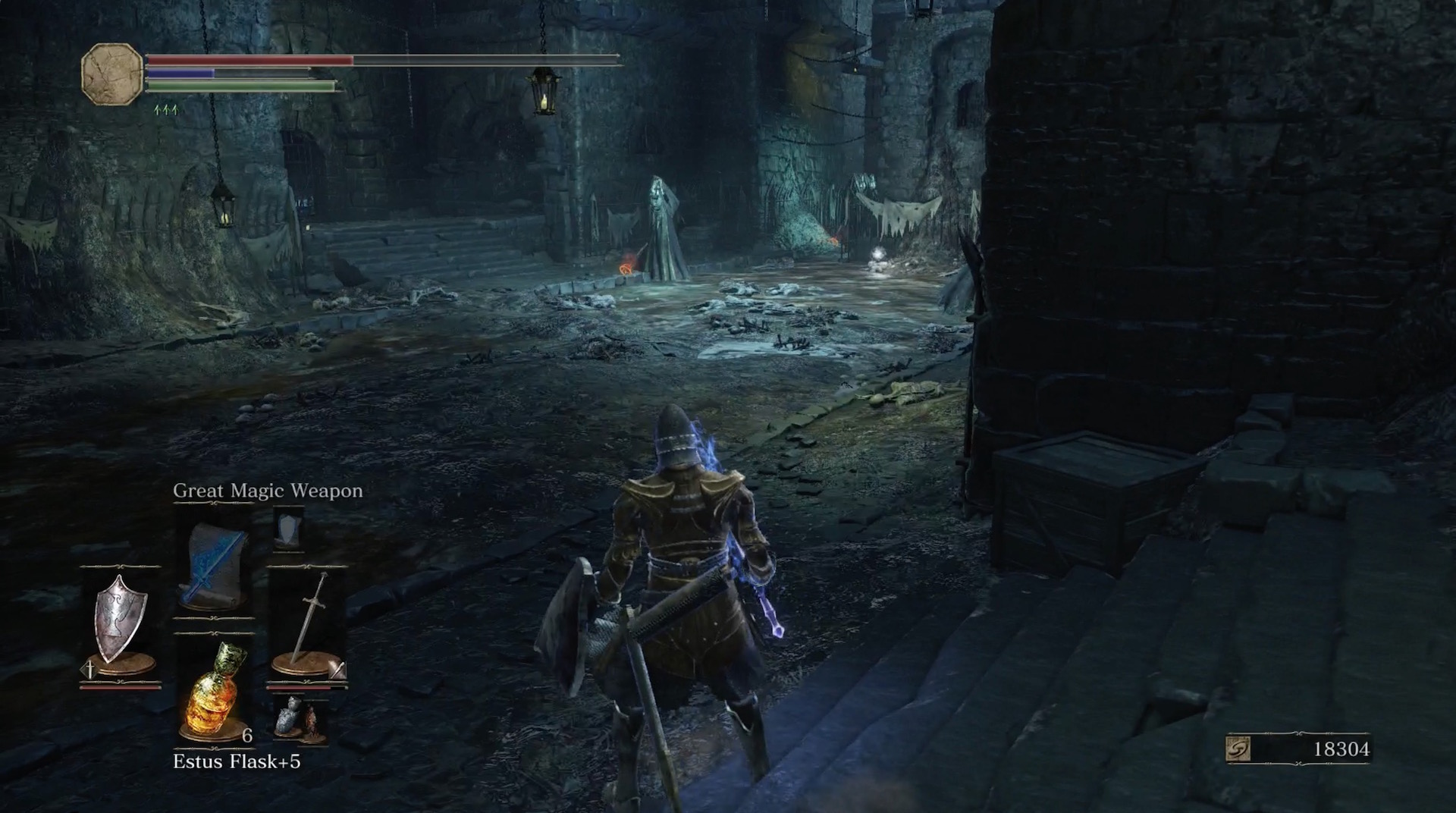 Exit the room out into the large lower dungeon area featuring several Jailers. They approach in two waves. Grab the Large Titanite Shard on the left, the Alva Armor Set to the right and the Ember in the center of the room. Retreat into the room where you just fought the two giant rats if you need to catch your breath while fighting the Jailers. You can also keep the large pillar in the middle of the room between you for cover — it’ll also let you sneak behind for backstabs if you’re careful. There’s another Ember further down the dungeon on the right. Raise the gate at the large cell to the left. Inside, grab the Xanthous Ashes and the Dusk Crown Ring. The cell at the opposite side has a Lycanthrope. The cell opposite the doorway from where you entered the room has multiple Wretches. Grab the Profaned Coal in that cell. To the right of that cell is a hallway with a Mimic, which will drop two Titanite Scales.

In the room across from where you first entered, there are five Wretches. Clear them out and pick up the Profaned Coal to give to Andre back in Firelink Shrine. Back outside, continue along that wall to find a Mimic that will drop two Titanite Scales. Open the gate into the cell at the end to pick up the Xanthous Ashes and the Dusk Crown Ring. Across the main floor, there’s another cell containing a Lycanthrope — there’s nothing in the cell with him, so opening his cell and fighting him is optional. To the right of that cell door is another hallway. There’s a Jailer to waiting for you in the hallway. Behind it is one more locked cell. You can’t open this one, though, so just note its location for later — you need the same Jailer’s Key Ring we mentioned above.

To the Profaned Capital

From the lower dungeon entrance (connected to the room with the two large rats), make a temporary detour left. You'll emerge to an open area with a small dragon statue sitting upright. Grab the Dragon Torso Stone. Make note of this location for later when you're planning to visit one of the hidden areas, Archdragon Peak. 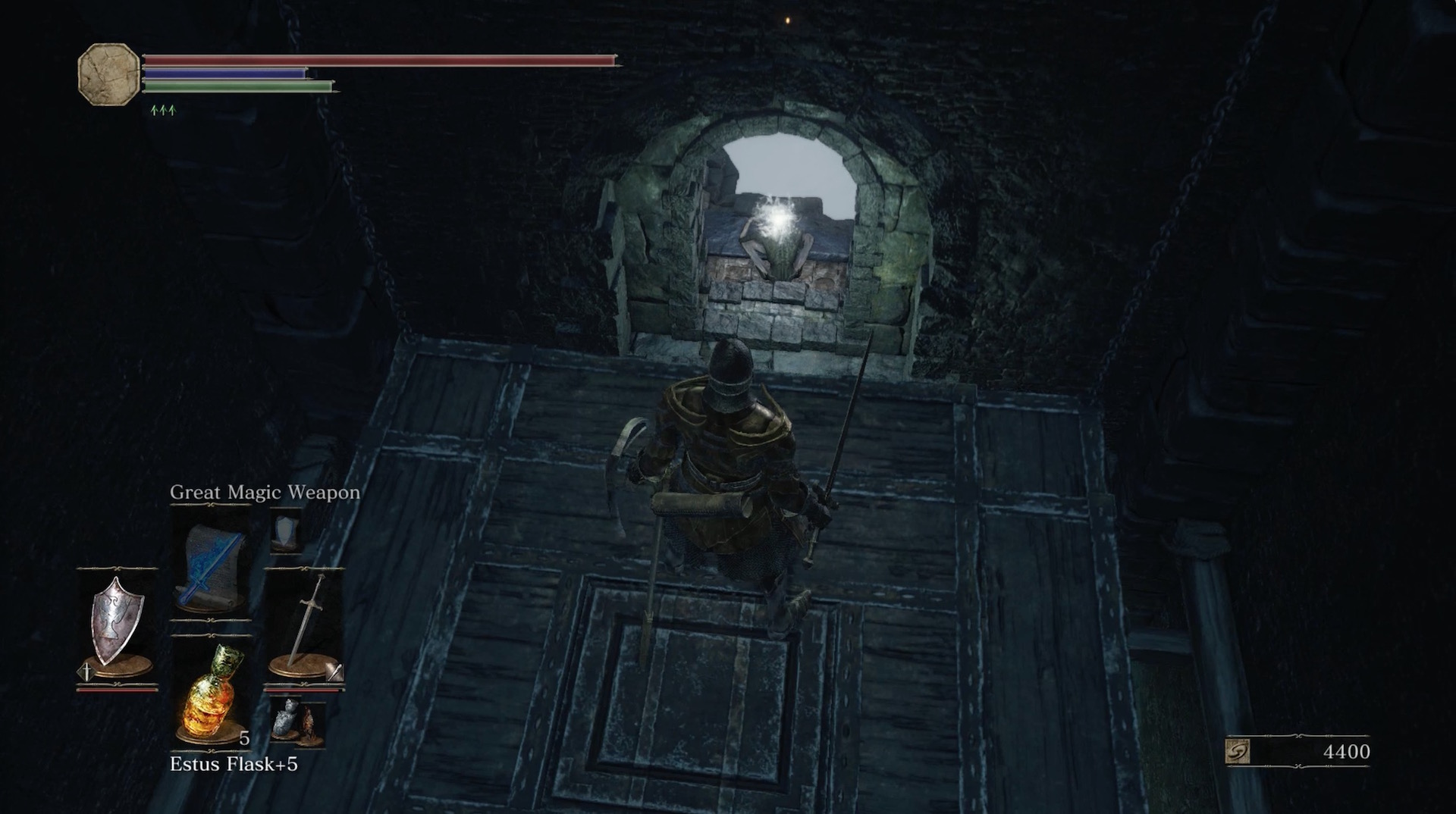 While you're here, take the elevator up to create a shortcut back to the main section of the dungeon. There is also a Lightning Blade on the middle ledge of the elevator shaft. 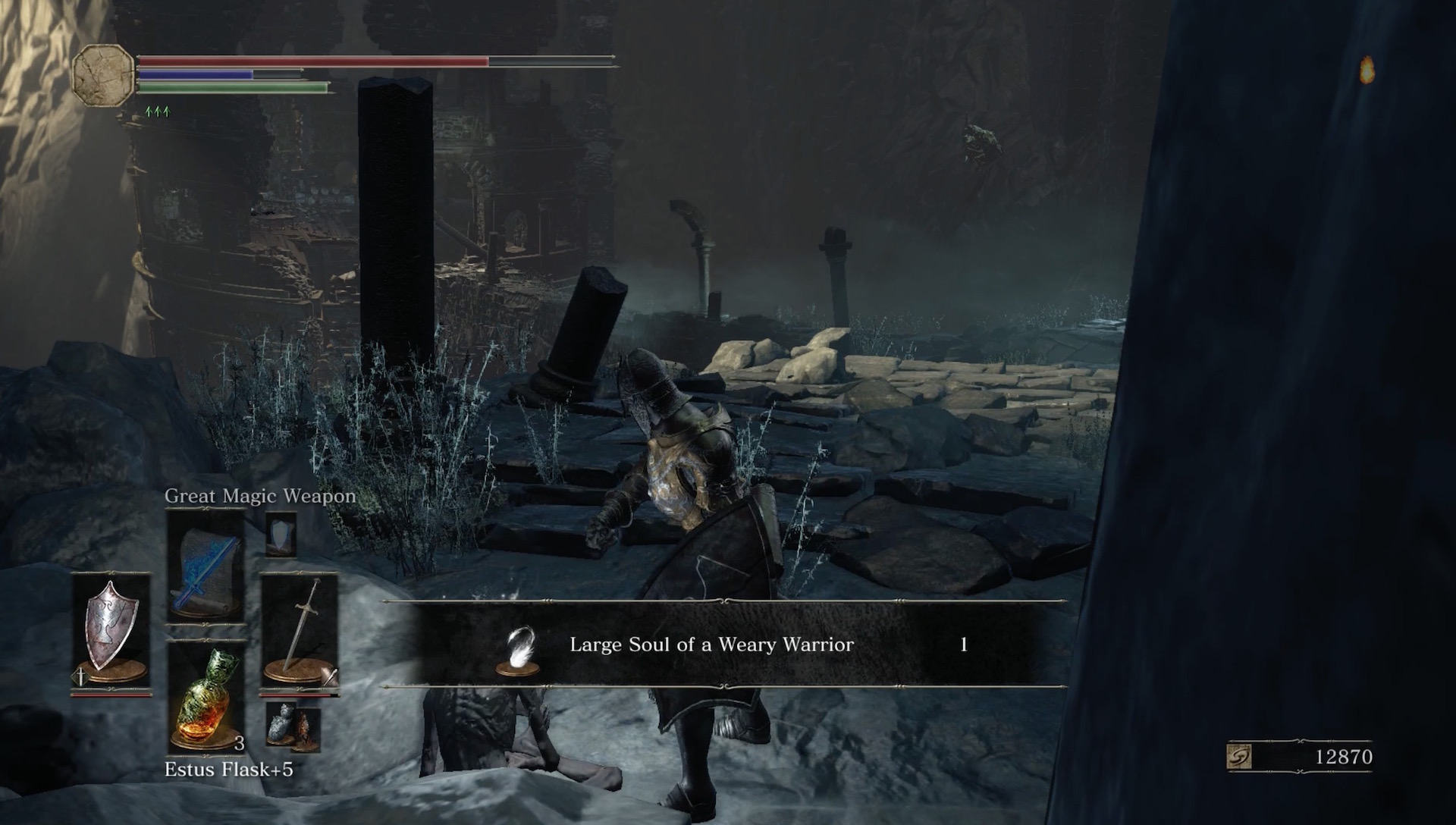 Return to the lower dungeon when you're ready to go back on the critical path. Go past the column the Jailers were congregating around and go through the arch into the next open area, named the Profaned Capital. Left of the bridge is a Soul. 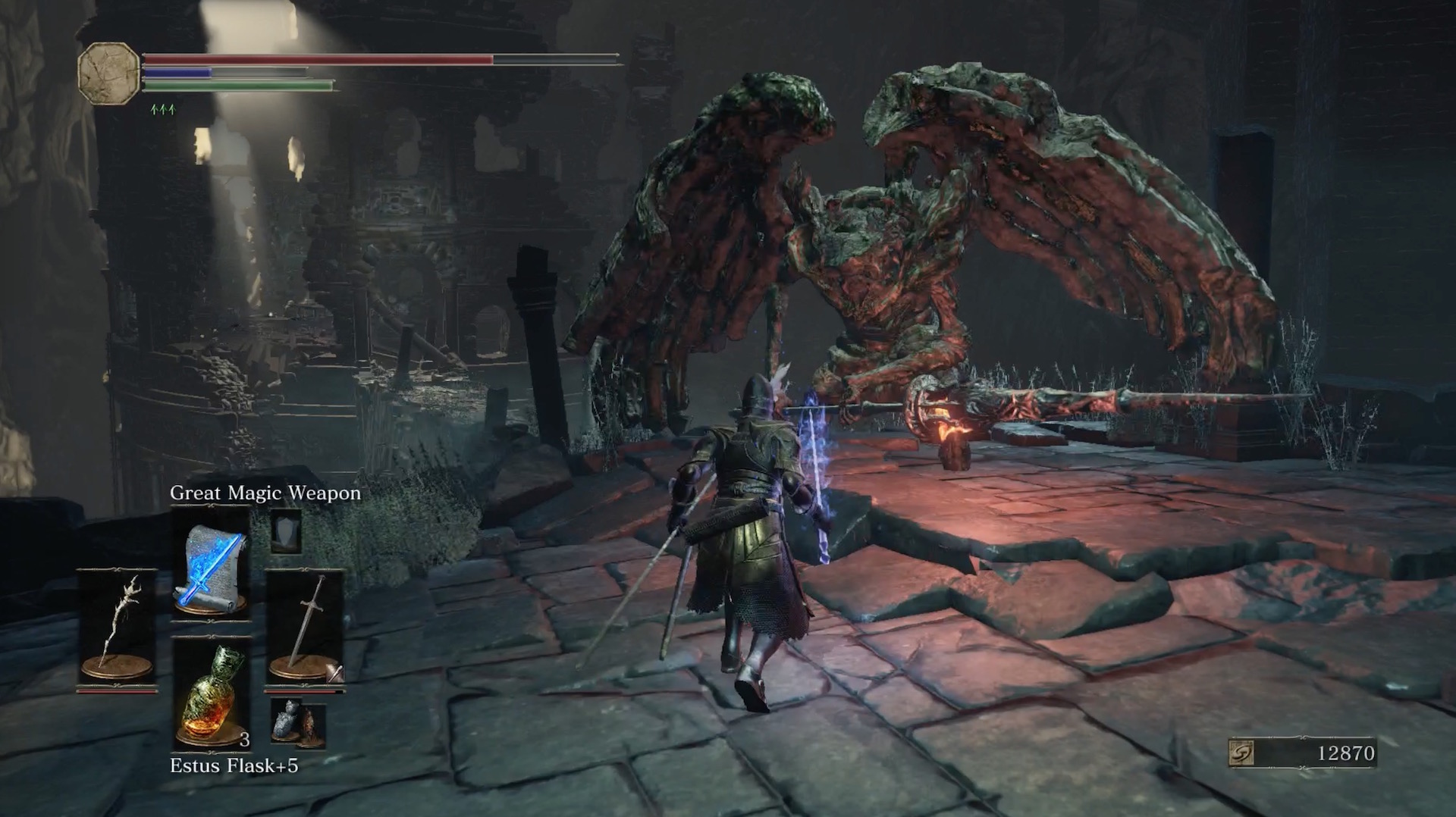 As you make your way to the round tower, a Headless Gargoyle will attack you at the bridge. Feel free to retreat off the bridge to have better room to work with while fighting the gargoyle. Use the lock-on to keep it in your sights as it tries to attack you from above. Also, save your stamina if it's using its wings as a shield. 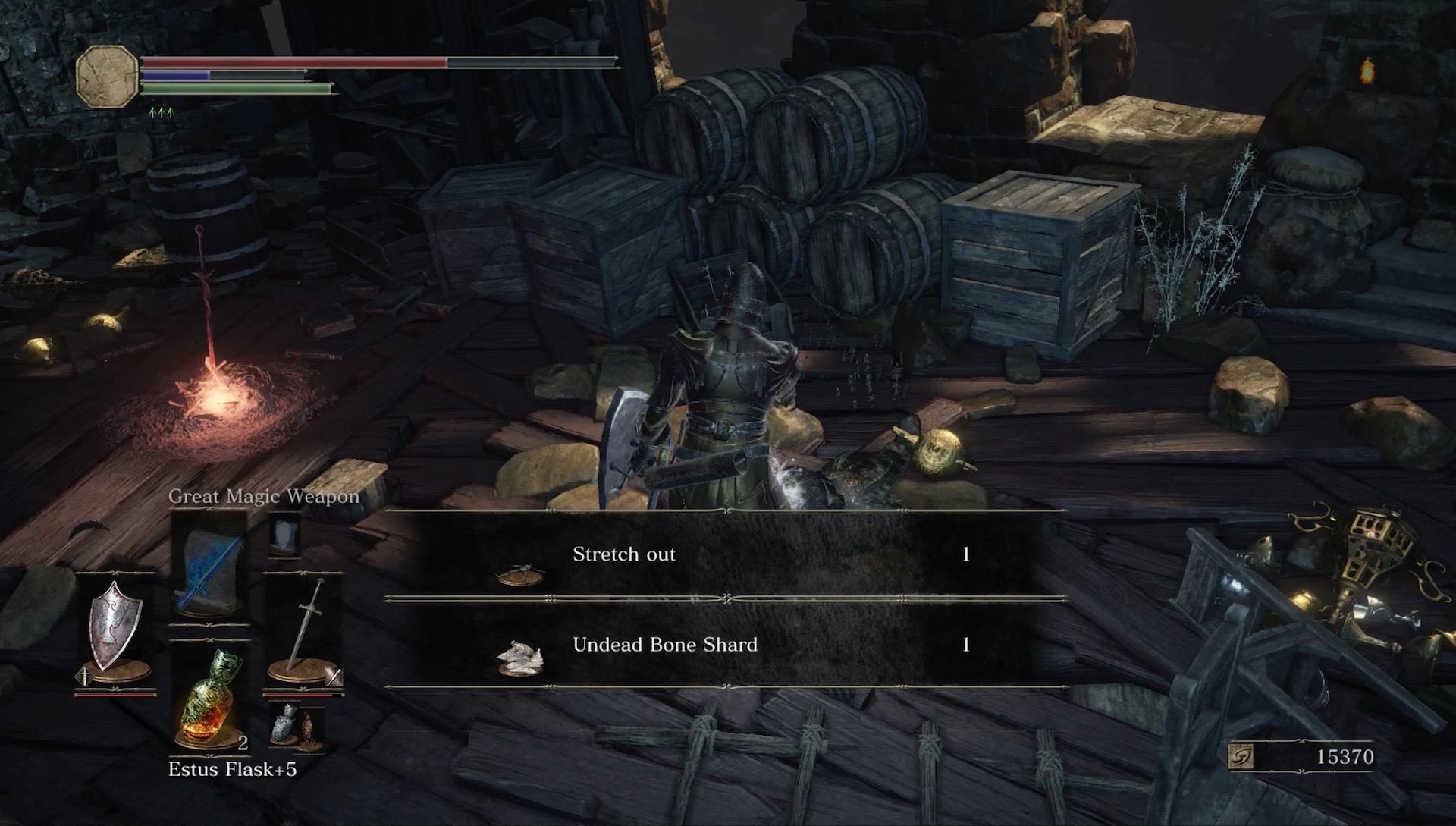