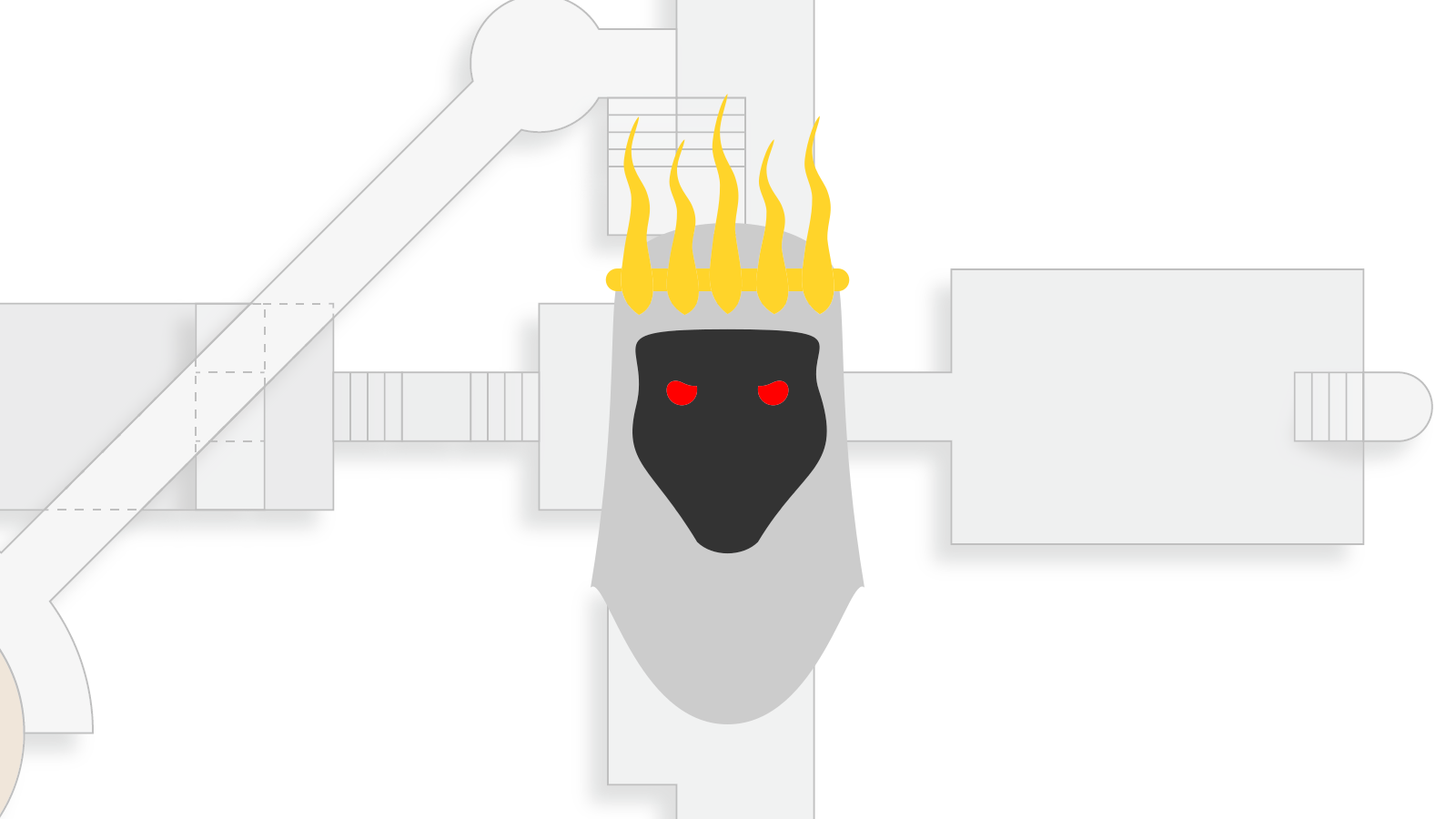 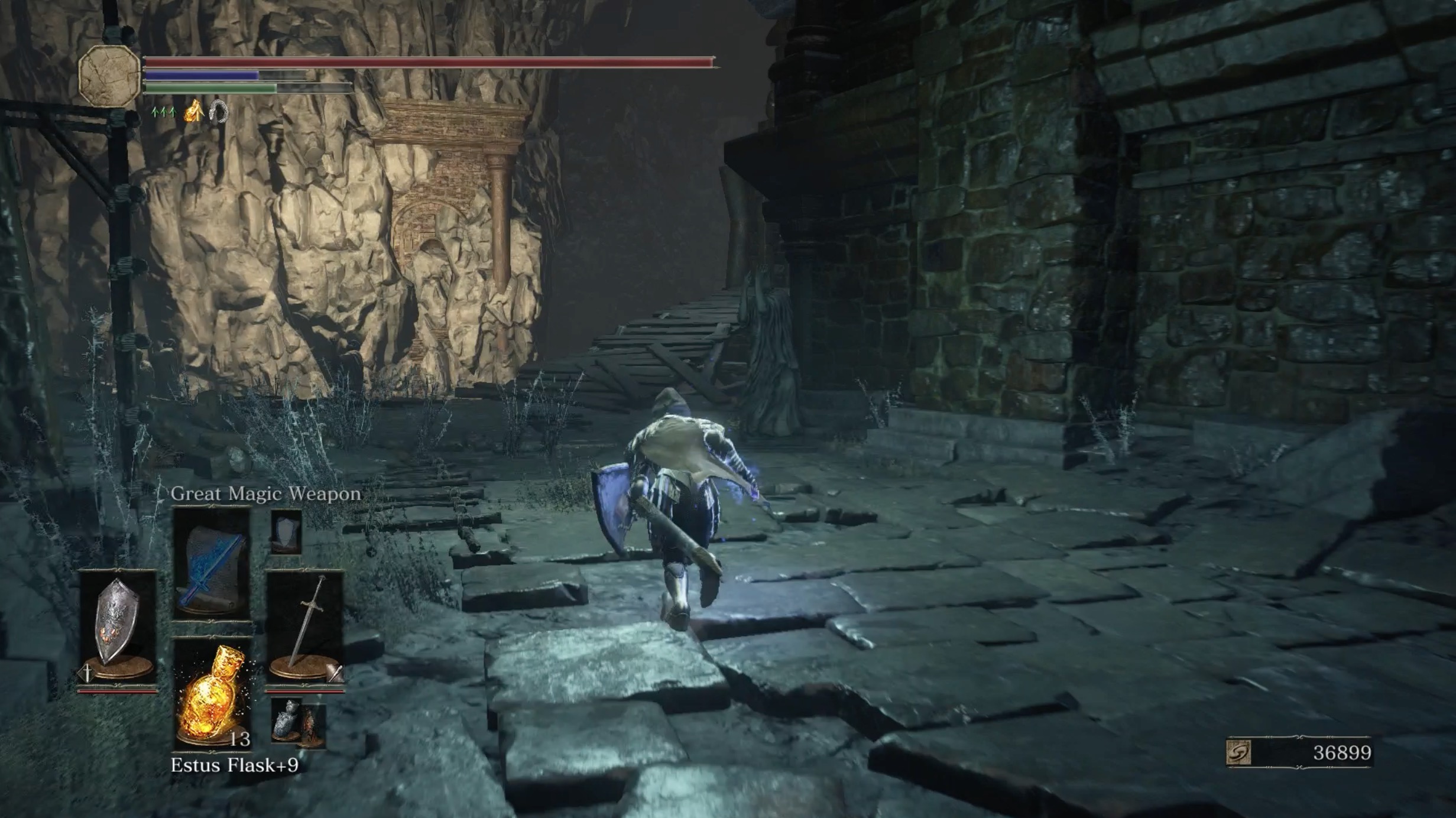 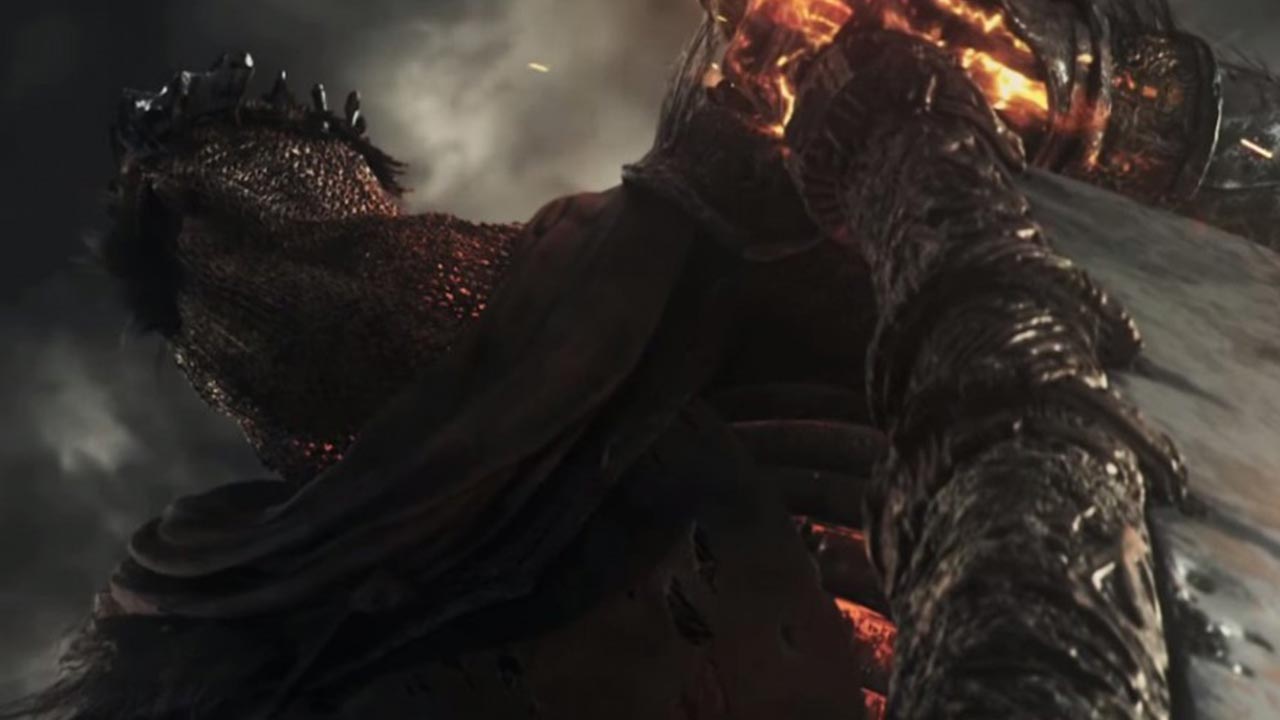 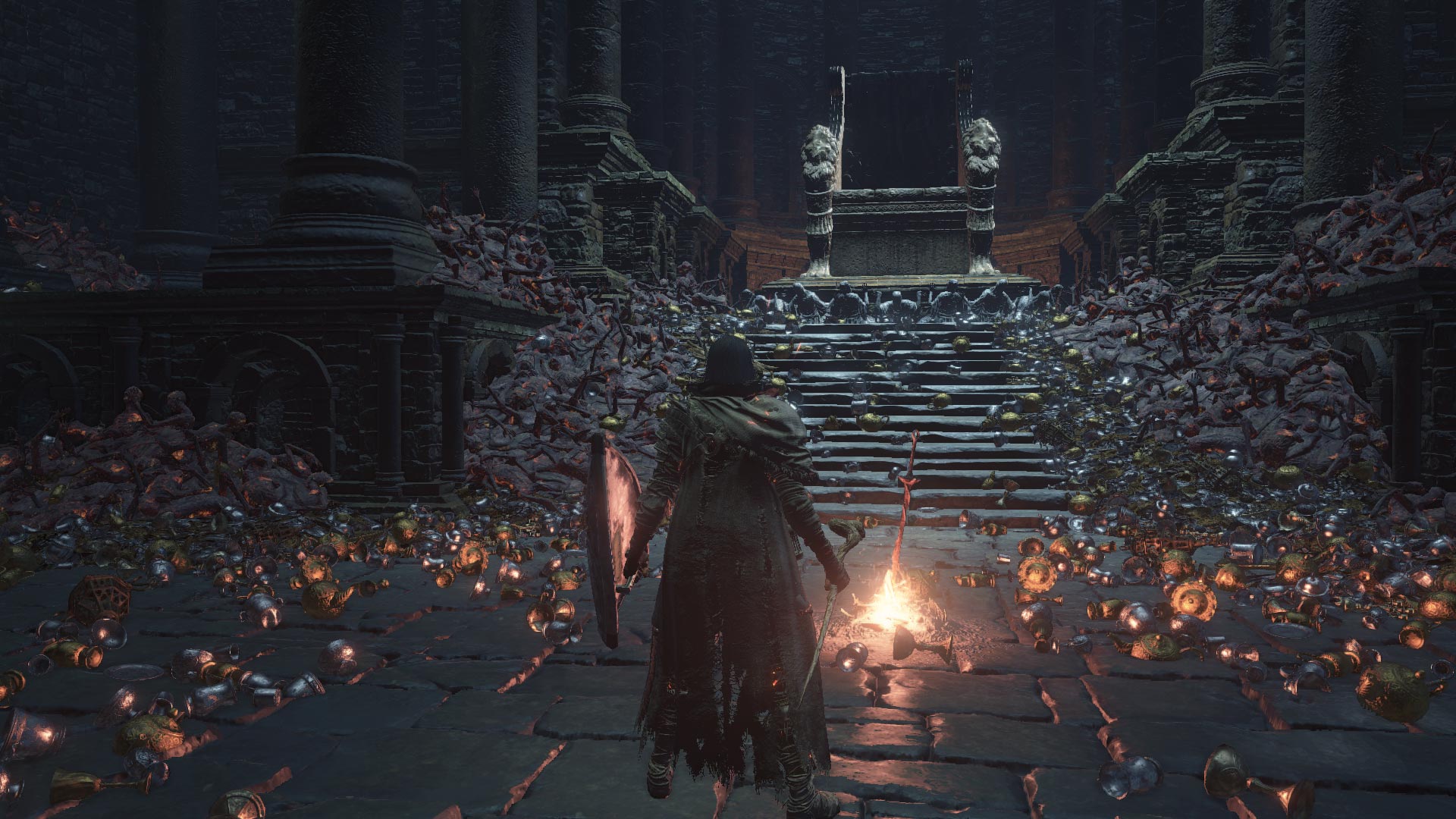 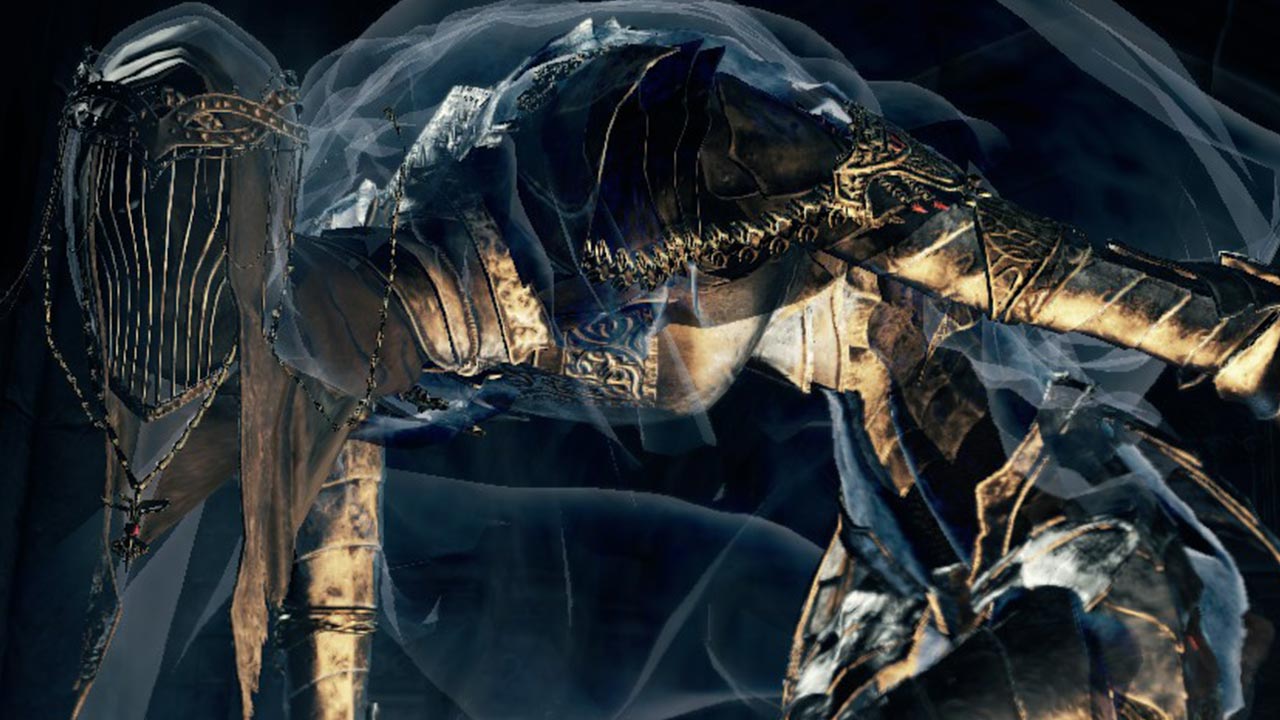 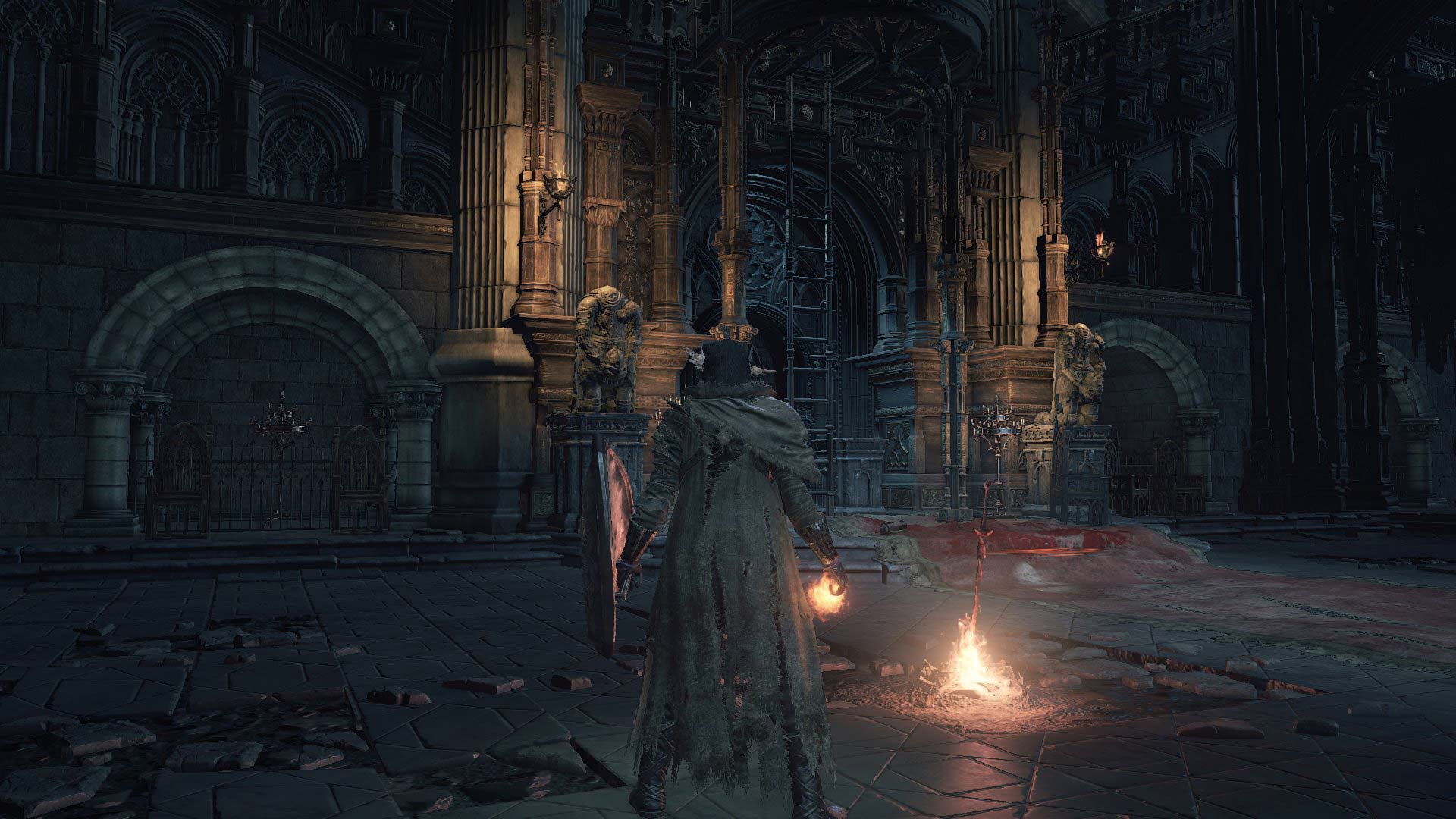 Dancer of the Boreal Valley bonfire

Head back down the same ladder you just climbed. Look for a hole in the wall and go through it. Go around the exterior of the round tower and climb up the ladder. Grab the two Rusted Coins. Go down the ladder and then head up the wood ramp into a small temple. When inside, take the first left, then the next right, take out the Crystal Lizard, then take the next right after that, take out another Crystal Lizard, then take one more left, then one more right to the wooden platform at the temple exit. If you make a left instead of the last right, there's a Rusted Gold Coin you can grab. This route will let you avoid the holes in the floor. Dropping through the holes isn't fatal though it's easier to manage the enemies below if you use the wooden platform. 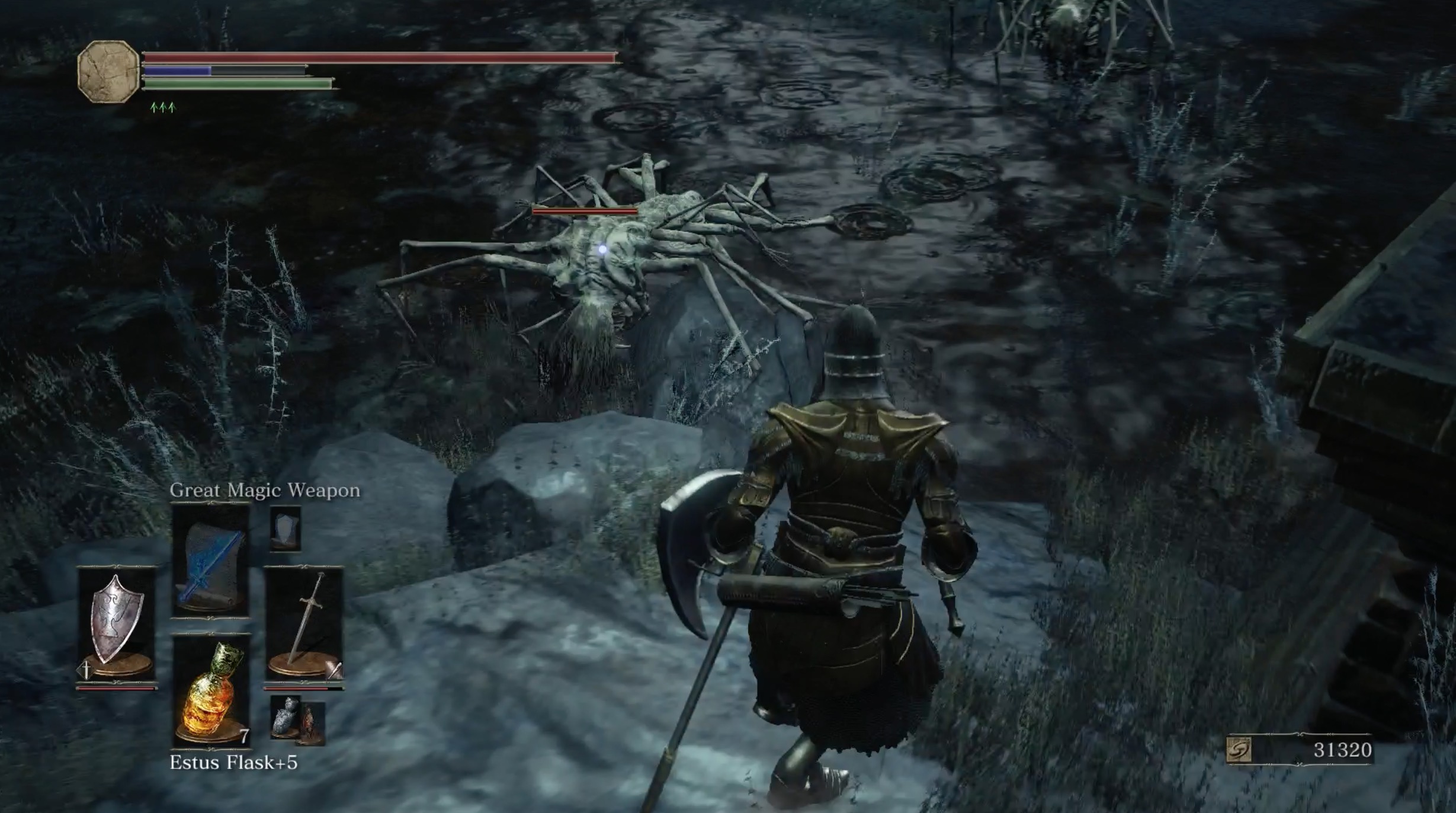 Jump off the platform and take on the Sewer Centipedes at the pool below. Grab the Purging Stone while you're here. The centipedes are spread out evenly enough that you should be able to fight them one by one. By making a U-turn to the right, you'll find a cave with more Sewer Centipedes. Grab the Cursebite Ring and the Poison Gem while inside. 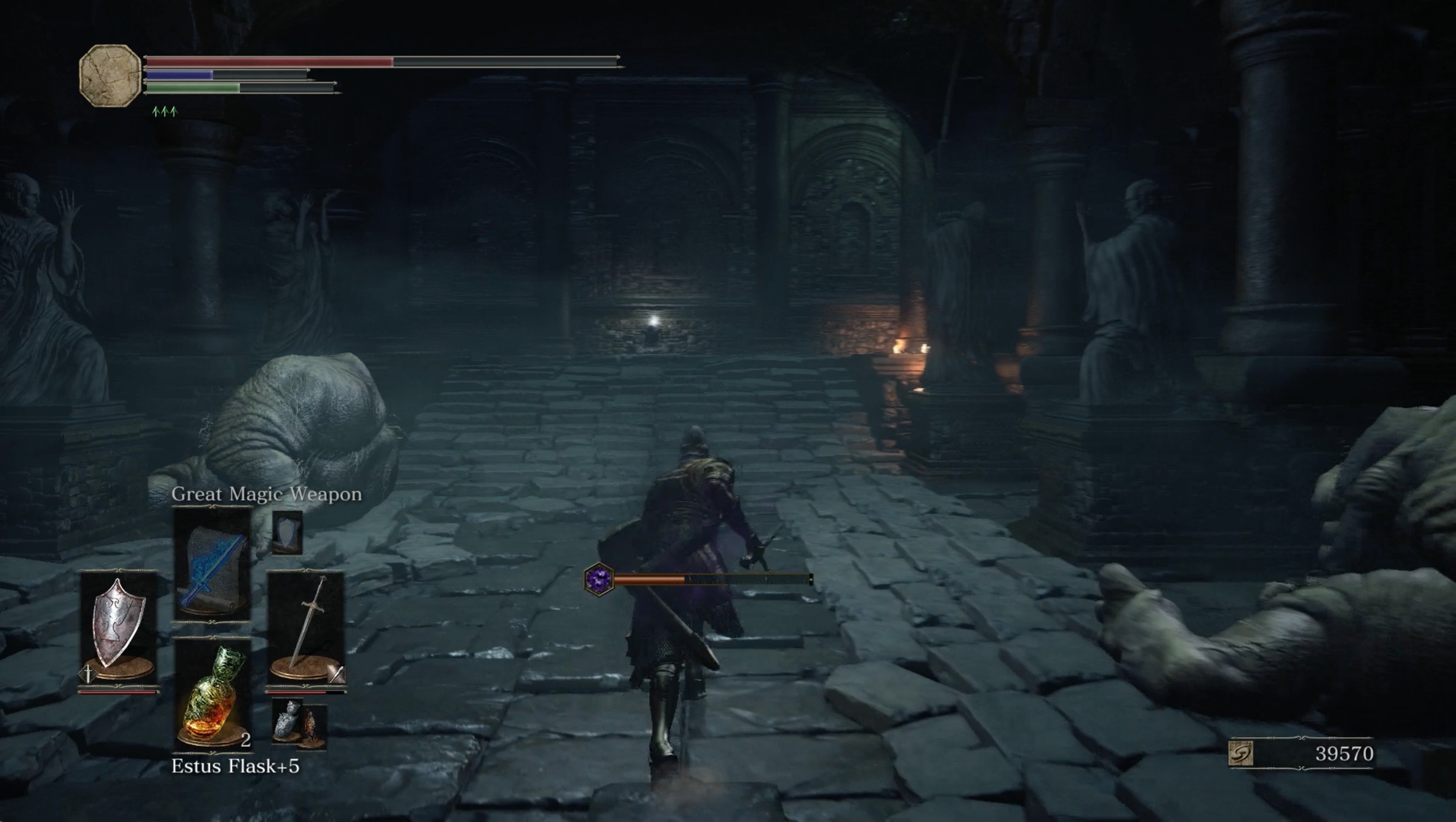 Leave the cave and head straight and to the left. You should reach a room at the bottom of the temple. There are three Monstrosities of Sin inside plus three Purging Stones at the other end of the room. The Monstrosities can be lethal if you’re not careful. If they stand upright, run away as fast as you can. They can take off over half your health with their grip-and-munch attack. If you can avoid that attack, they’ll plop on the ground, giving you an opening to pull off at least half a combo. You can try to flank them but they’ll most likely roll toward you, which can cause considerable damage. They’re vulnerable when they sit upright. All three Monstrosities will drop two Dung Pies each, while killing all of them will give you the Eleonora axe. 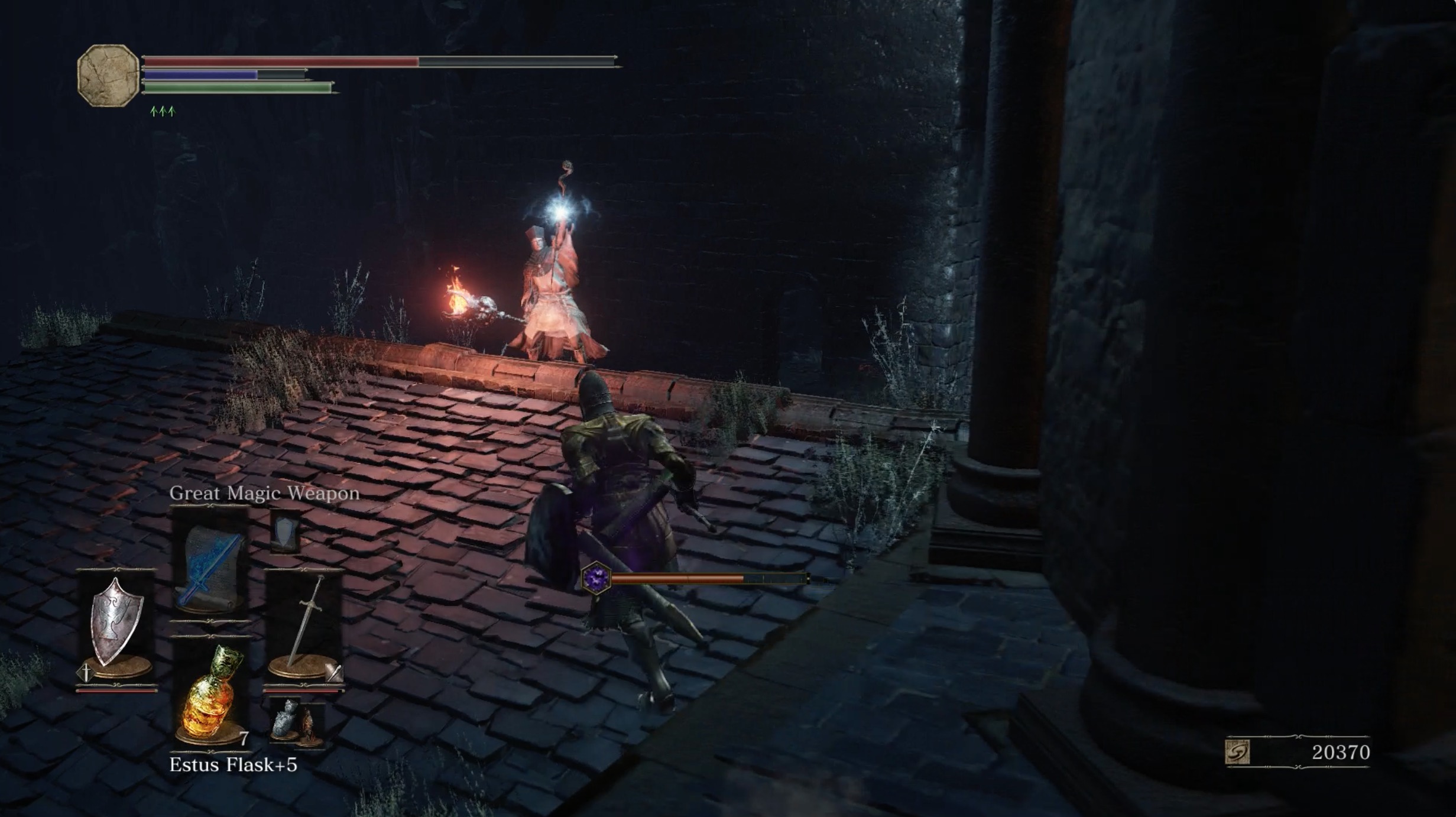 When you’re finished with that room, head for the ladder at the temple exterior and make your way to the roof. There are some Poison Arrows at a corpse nearby as well as an Unkindled worth fighting. This mage is skilled at both ranged spells and melee attacks with its staff. Getting up close will negate his spells; you just need to be able to keep up with his roll dodges. If you kill him, he’ll drop a Logan’s Scroll. 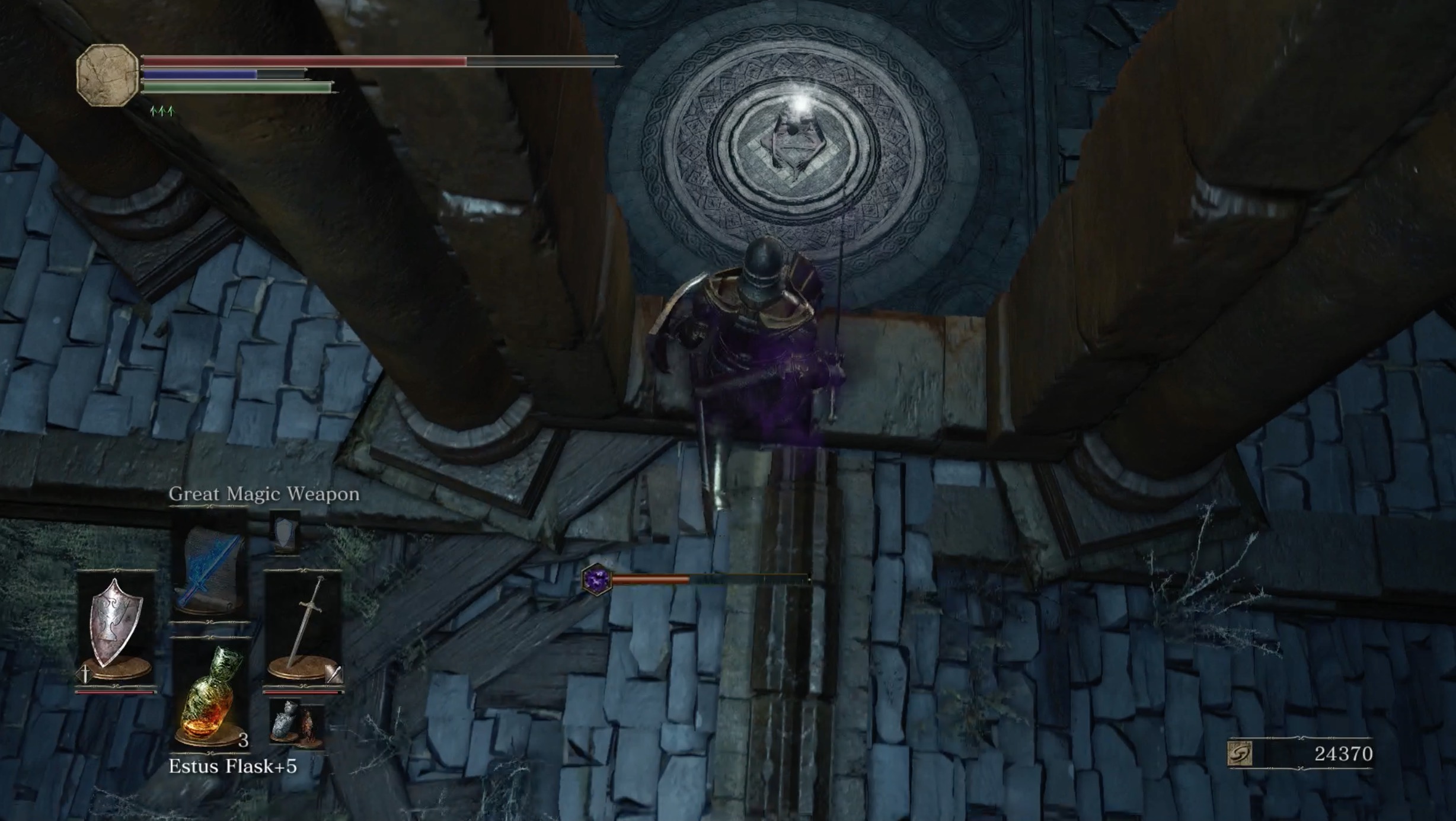 The top of the temple features a hole in the middle where you can drop into the temple’s interior. The landing platform has a Wrath of the Gods and a Monstrosity of Sin resting nearby. After killing it, it will drop two Dung Pies. Grab the Court Sorcerer Gear, at the base of the landing platform, the Court Sorcerer's Staff from the Mimic behind the platform and the Rubbish by going downstairs. Before we continue on the critical path, it’s time to visit an old friend and finally get the Jailer’s Key Ring we mentioned during the Irithyll Dungeon walkthrough.

Head back up to the roof of the temple. On the left side — the side closest to the stairs — look at the wall in front of you. You will see an open window. Run and jump off the edge of the roof and you will land inside the room there. Continue up the stairs to the closed gate.

Use the Old Cell Key you picked up in Irithyll Dungeon to unlock it. Inside, you’ll find your old friend Siegward of Catarina and the Covetous Gold Serpent Ring, which increases item discovery.

Retrace your steps to the roof of the temple. Drop onto the stairs you just jumped over and take them up. At the top of the stairs, there are two invisible Jailers waiting for you to pass. Attack the air to draw them out.

When they’re handled, continue following the path to the left. Take it all the way to the end to find the Jailer’s Key Ring.

From here, you can drop into the area of Irithyll Dungeon with all the rats where you fought the Giant earlier. While this is technically optional, we’re going to go this way to pick up some items previously unreachable and to free an NPC. If you’re not interested, work your way back to the Profaned Capital bonfire and we’ll meet you there in a minute.

Clear out the rats — either with ranged attacks or by dropping in and getting your hands dirty — and then exit through the tunnel on your left. Take the elevator you find there up to the Irithyll Dungeon bonfire.

Start retracing your steps through the Irithyll Dungeon. The first door you can open now is right in the first hallway. The cell on right-hand side on the end will unlock with the Jailer’s Key Ring, getting you a Rusted Coin.

Turn right at the end of the hall and continue along to the staircase on the right. At the bottom of the stairs, you’ll find another locked door on your left. Use the Jailer’s Key Ring again to get inside and pick up the Prisoner Chief’s Ashes which will unlock a few new items with the Shrine Handmaid, including Karla’s Armor Set — a lightweight set with good curse protection.

Continue the rest of the way down to the bottom floor of the dungeon. Head to the lycanthrope’s cell, then turn right. Unlock the cell you find on your left to free Karla. After you talk to her and she heads to Firelink Shrine, you can talk to her there to learn Pyromancies, Sorceries and Miracles.

Now you can return to the Profaned Capital bonfire and pick up the critical path.

While standing on the large wood platform with the bonfire, look at the leftmost hole in the wall; there's a ladder at that hole. Go down the ladder and cross the bridge close by. There's another Headless Gargoyle as well as Jailer Handmaids launching fireballs from a distance. Whether you choose to confront the demon or not, your next destination is the other end of the bridge. Grab the Onislayer Greatarrow on the bridge and the Soul at the other end of the bridge. 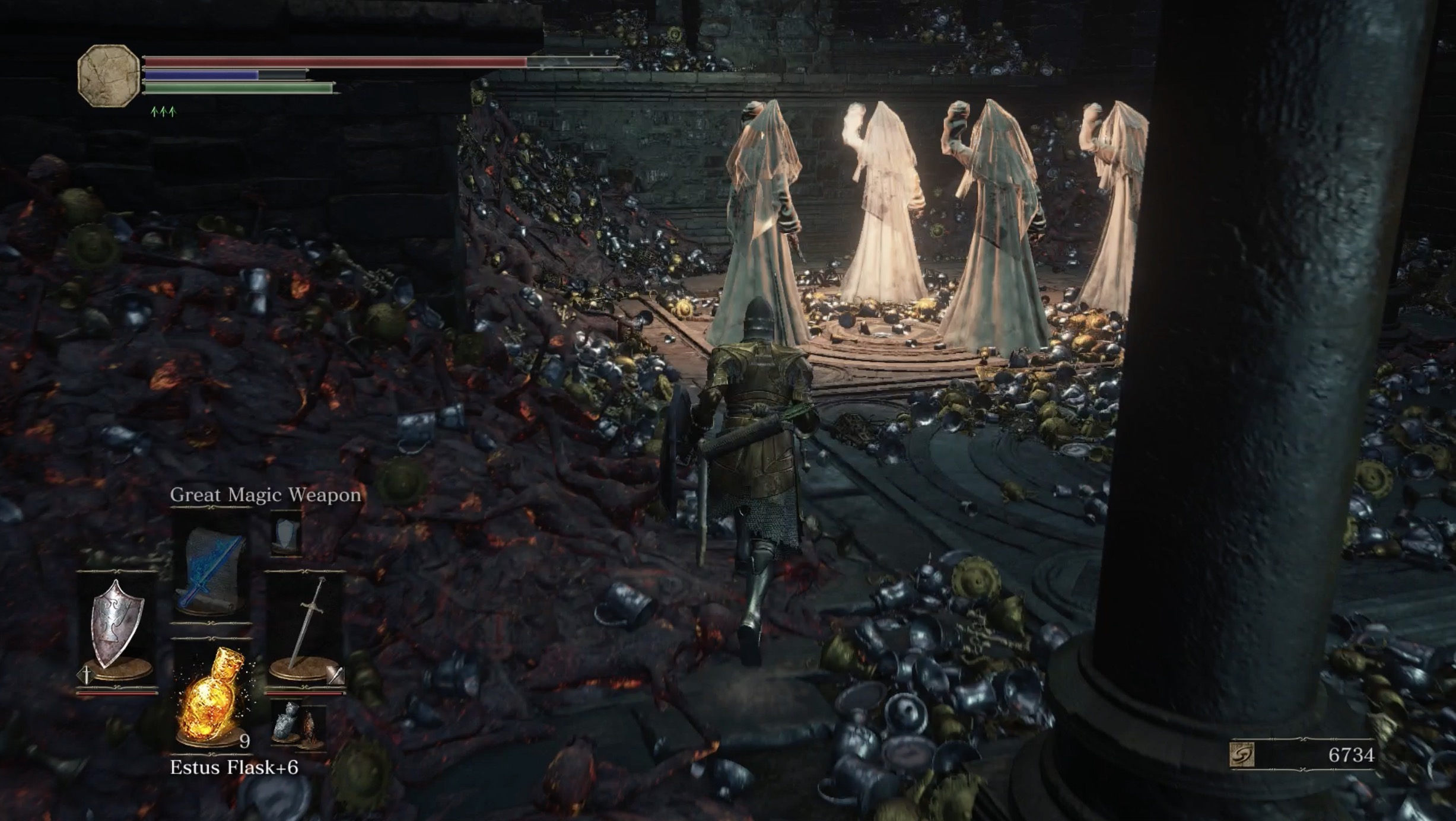 When inside, take care of the four Handmaids on your left, then another Headless Gargoyle as you go down the hallway. Though the Handmaids look like Jailers, they’re much much easier to deal with, provided you don’t let them crowd you. They’re particularly slow with their dagger stabs. 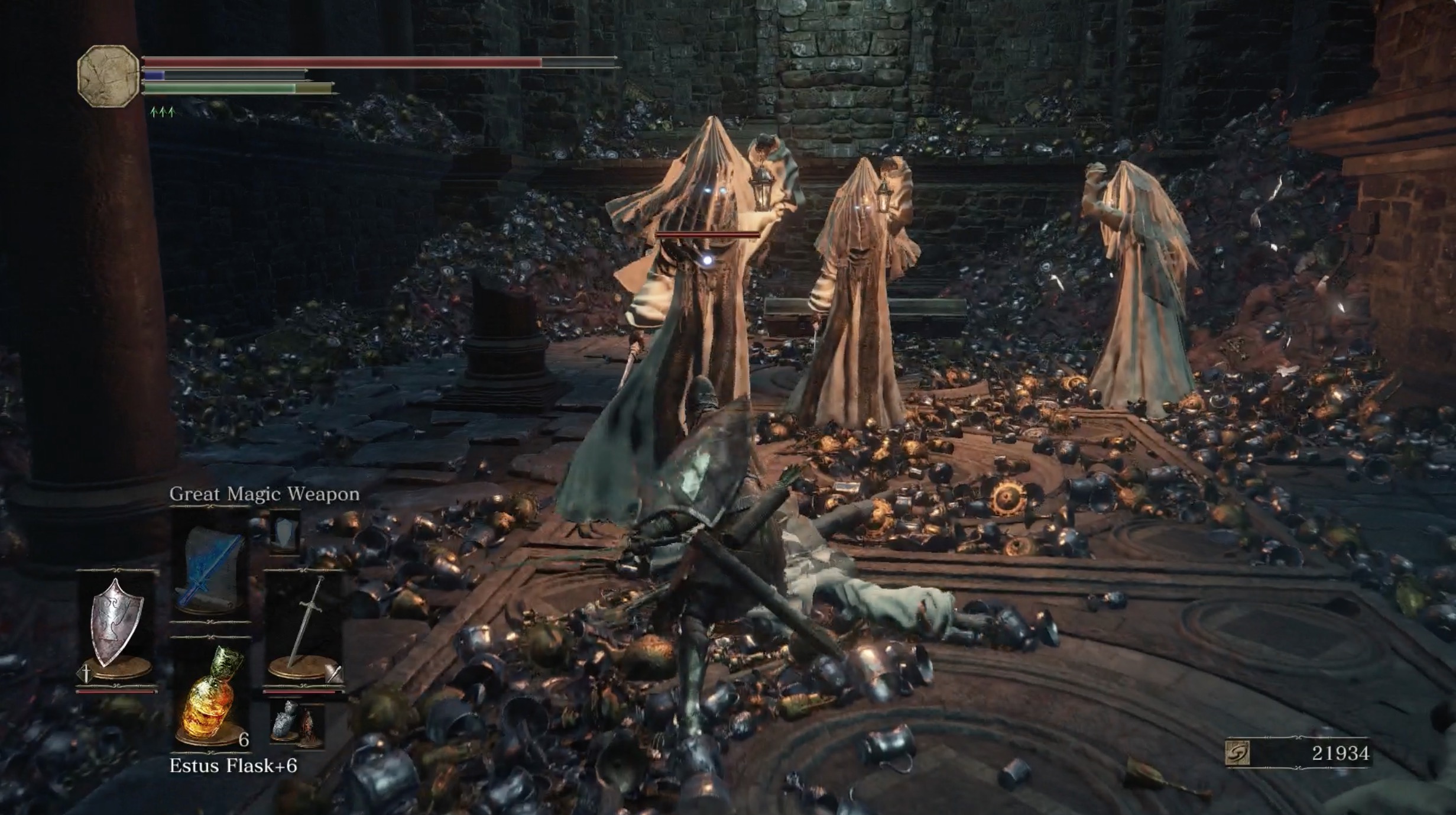 At the four way intersection, you have more Handmaids and another Headless Gargoyle at the far end. When you’re there, grab the Ember from the chest and take out the Mimic, who will drop a Rusted Gold Coin. Right of the intersection are four Handmaids by the flaming fountain. After taking out the Handmaids, check the bridge beyond the fountain for two Rusted Coins. 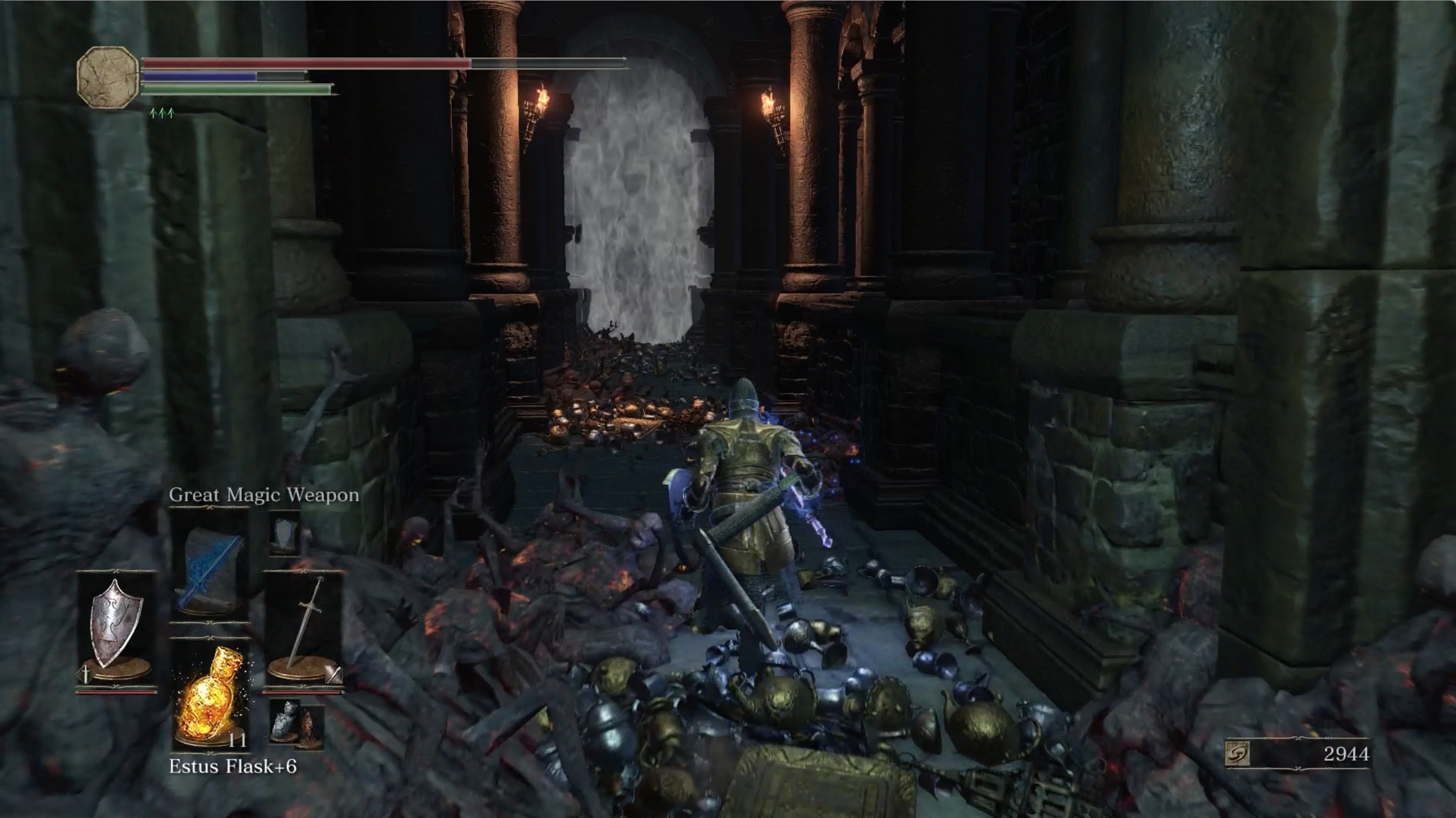 Your final destination in this area is to your left at the intersection, an encounter with the next boss, Yhorm the Giant.

Tactics (first phase): Technically, Yhorm can be defeat by using whatever weapon you've relied on up to this point, but to make this fight significantly easier, run to the right side of Yhorm's throne and grab a new weapon, the Storm Ruler. Distance yourself from Yhorm so you can equip the Storm Ruler.

Hold the weapon with two hands and activate the Storm Ruler's weapon skill. The skill has two intensity settings, so you can deal more damage if you can charge the weapon for a couple seconds more. Use the giant's slow movements to create openings for these Storm Ruler attacks, which should involve getting behind Yhorm by going between its legs. With its back toward you, charge and unleash the Storm Ruler's skill attack.

Yhorm uses its blade not unlike the two-handed saw wielder in the Undead Settlement. That means you should look out for single-handed downward strikes, often in a diagonal path and two-handed chops where Yhorm is holding its blade lengthwise. In other words, there's little value being in front of Yhorm. The exception is during its single-handed downward strike, which can be avoided if you're directly in front of him, to the extent that you're practically under Yhorm.

Tactics (second phase): Yhorm will become inflamed after its health is down to 50%. Its attacks remain the same except that they're executed faster this time. Yhorm also uses a circle-shaped flaming knockback attack. You don't have to be especially vigilant in anticipating this move as it takes off little to no health. Continue using the Storm Ruler's skill attack until you've defeated the boss.

Defeating Yhorm the Giant will automatically fast travel you back to the church at the bottom of High Wall of Lothric. This is also assuming you’ve already defeated Aldrich. Talk to Emma again. She will dissolve and you will be given the Basin of Vows. Placing the basin at the statue in front of you will trigger the next boss battle, so be sure to visit the Firelink Shrine first if you need to level up. 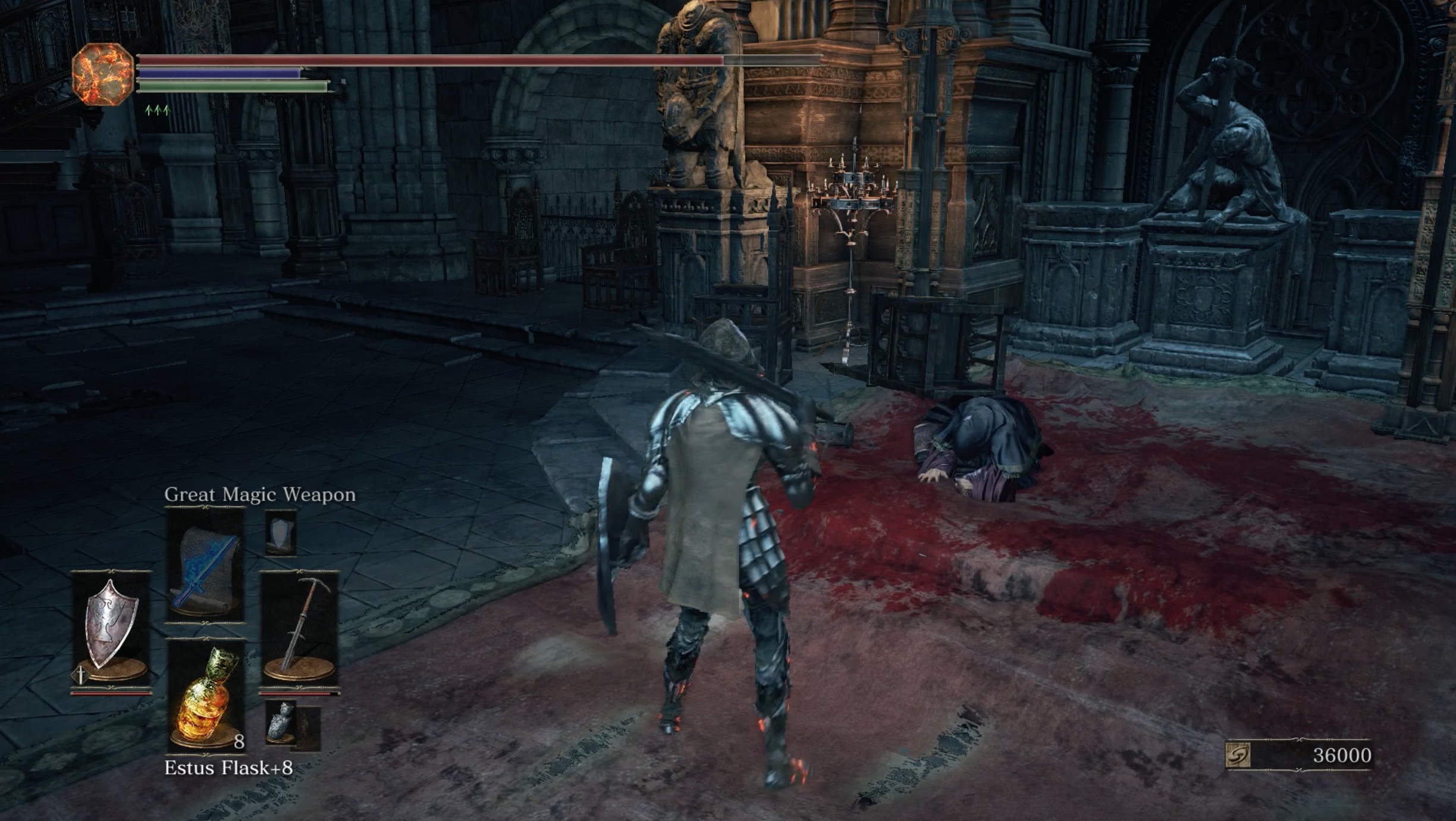 Avoid the Dancer's right side, then prepare for the spin attack.

Be prepared to move sideways almost constantly to keep up with The Dancer's persistent strafing motions, especially since you should prioritize the Dancer's rear as a weakpoint. Also take advantage of the column with the spiral staircase as a temporary barrier if you need time to reenhance weapons or heal.

Don't be fooled by its free right hand. Avoid it at all times since its grab-and-stab attack is one of the Dancer's more powerful moves. Blocking is a slightly more effective defense than rolling when it comes to the Dancer's various sweeping blade attacks. Also watch out for circular flame attacks, both in the forms of shockwaves and brief firewalls created by the Dancer's sword.

When you've gotten the Dancer's health down to about 60 percent it will conjure a second blade from the ground. The good news is that the grab-and stab attack is no longer in play. The bad news is that the Dancer now has a lethal spin attack that features up to eight deadly rotations. This attack is mostly blockable; the alternative is to run to the end of the map opposite the Dancer to avoid the move entirely. Dancer is vulnerable for two to three hits if it is dipping its second sword into the ground, creating a dark smoke. Just be ready for a damaging shockwave at the end of this move. Again keep away from its front; one of the Dancer's most painful attack involves an underhand strike with both blades.

Dancer of the Boreal Valley bonfire

Attempt to place the Basin of Vows the second time to bring down the ladder in front of you. This will give you access to the next area along the critical path, Lothric Castle.

You don't have to take the critical path, though. You can head to Anor Londo first.