You might have noticed the ladder above Emma during your first visit to High Wall of Lothric. With some Lords of Cinder defeated, you can now go beyond the ladder to Lothric Castle. Along with the castle, you can go off the main path to two optional areas, Consumed King's Garden and Untended Graves. Doing so will present you with a key item that will give you access to Archdragon Peak. 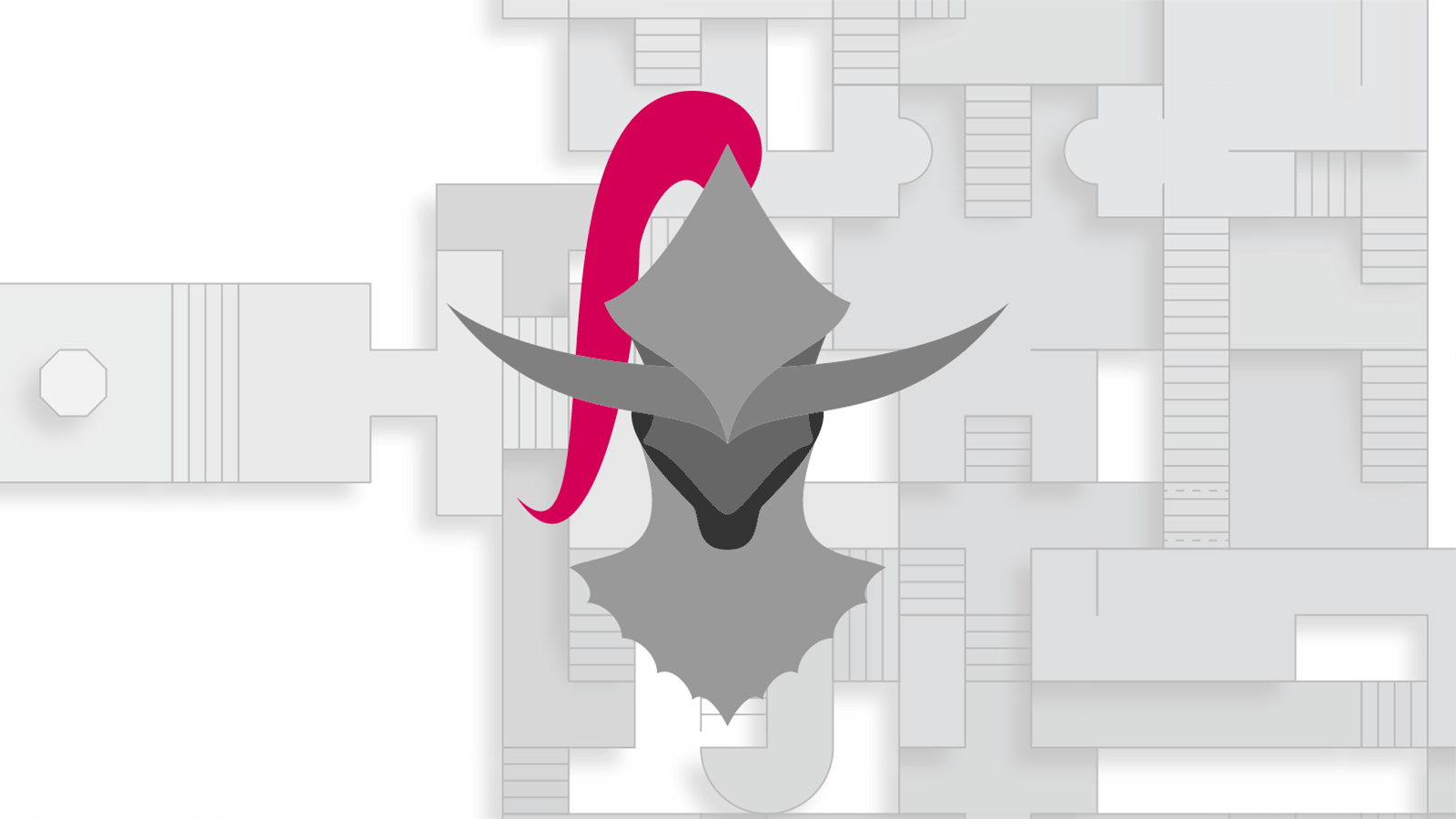 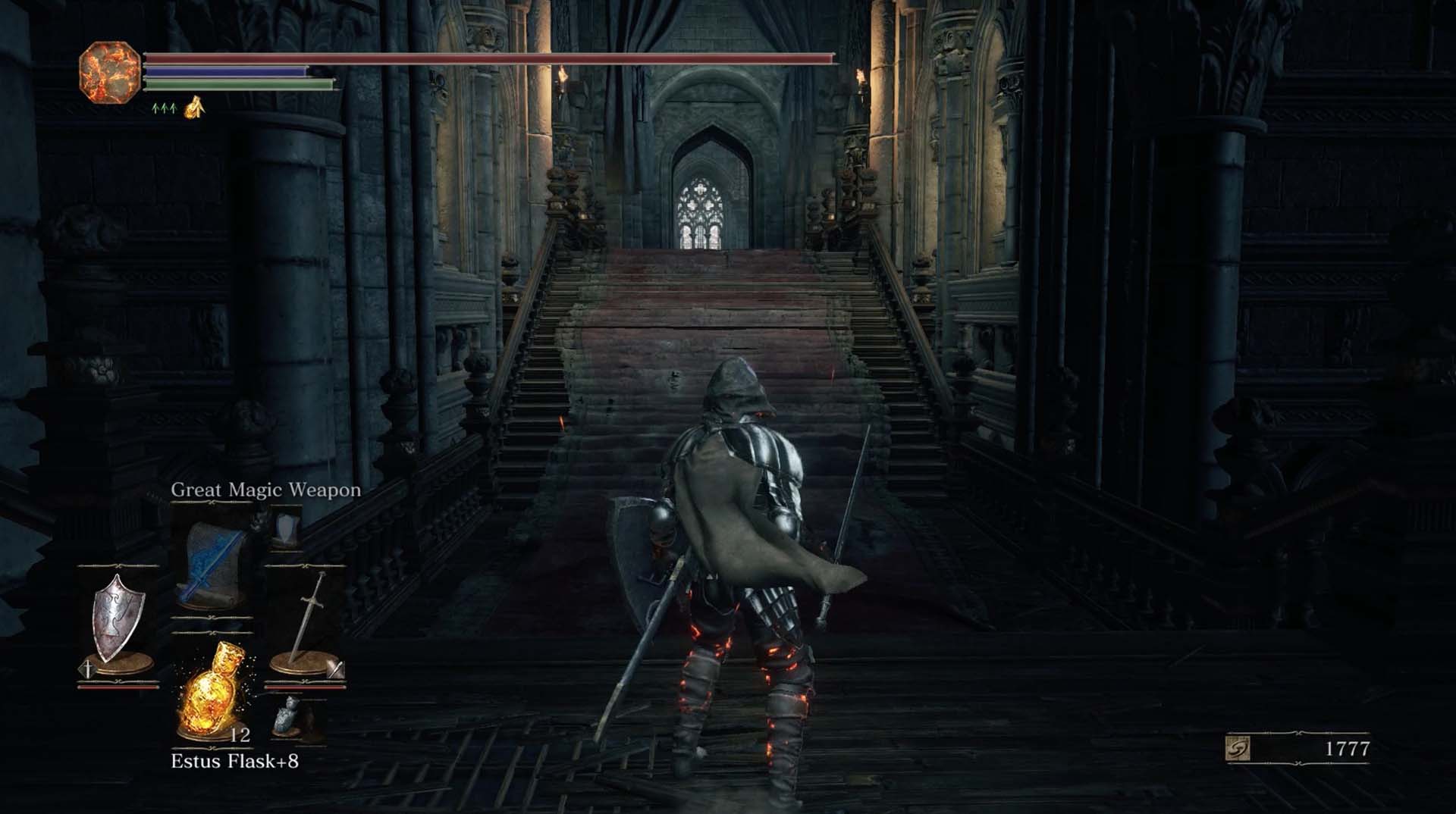 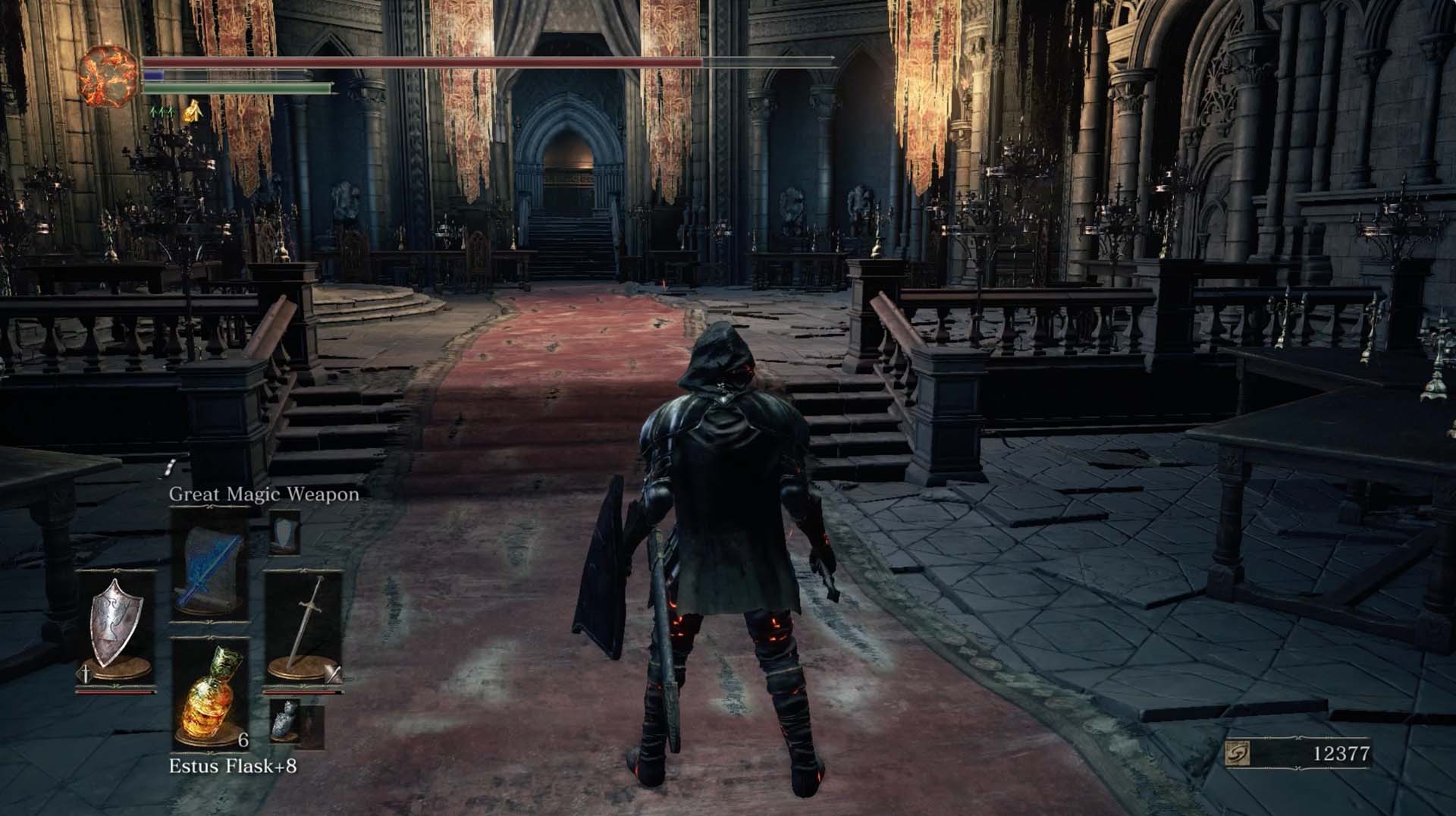 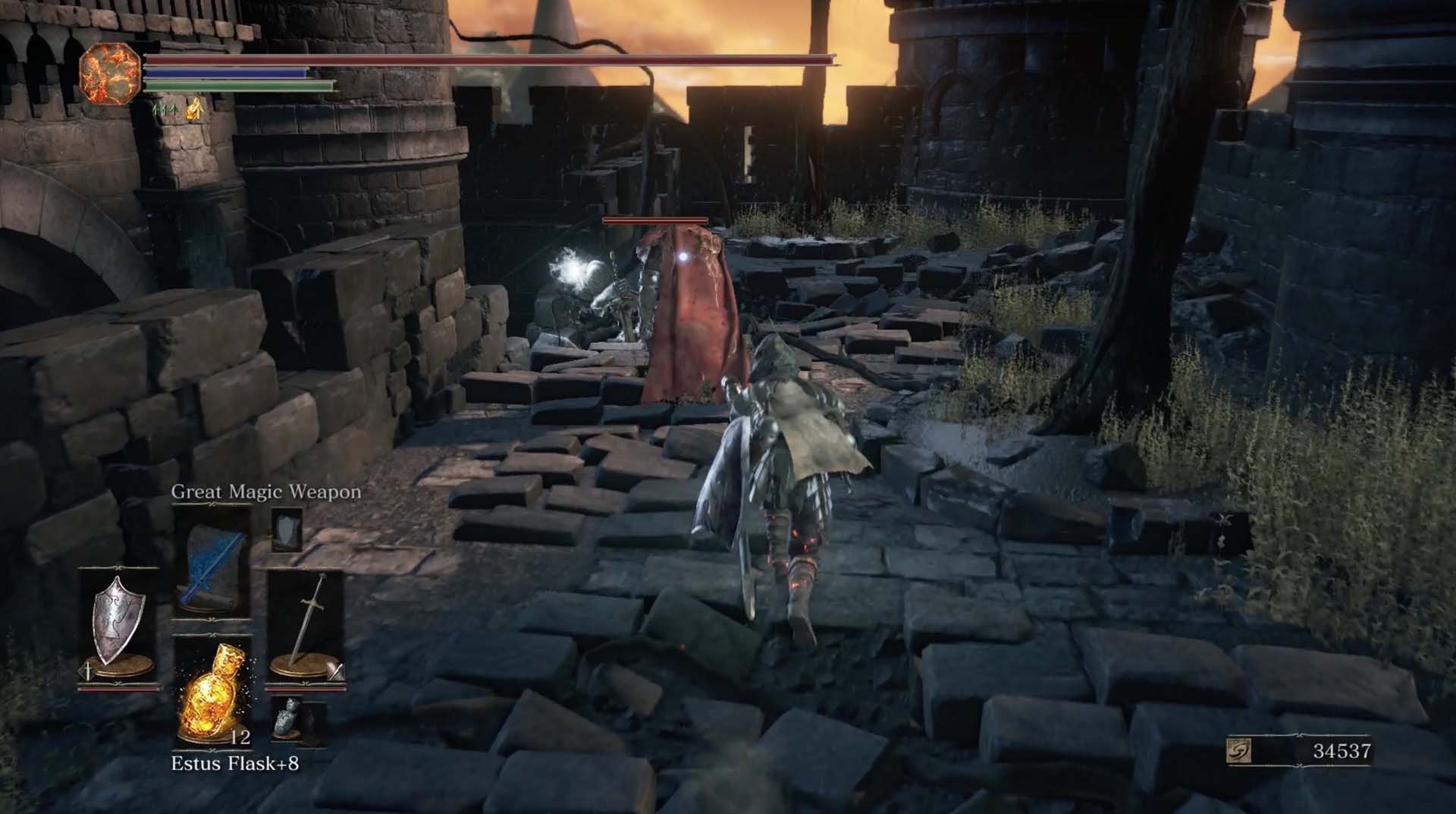 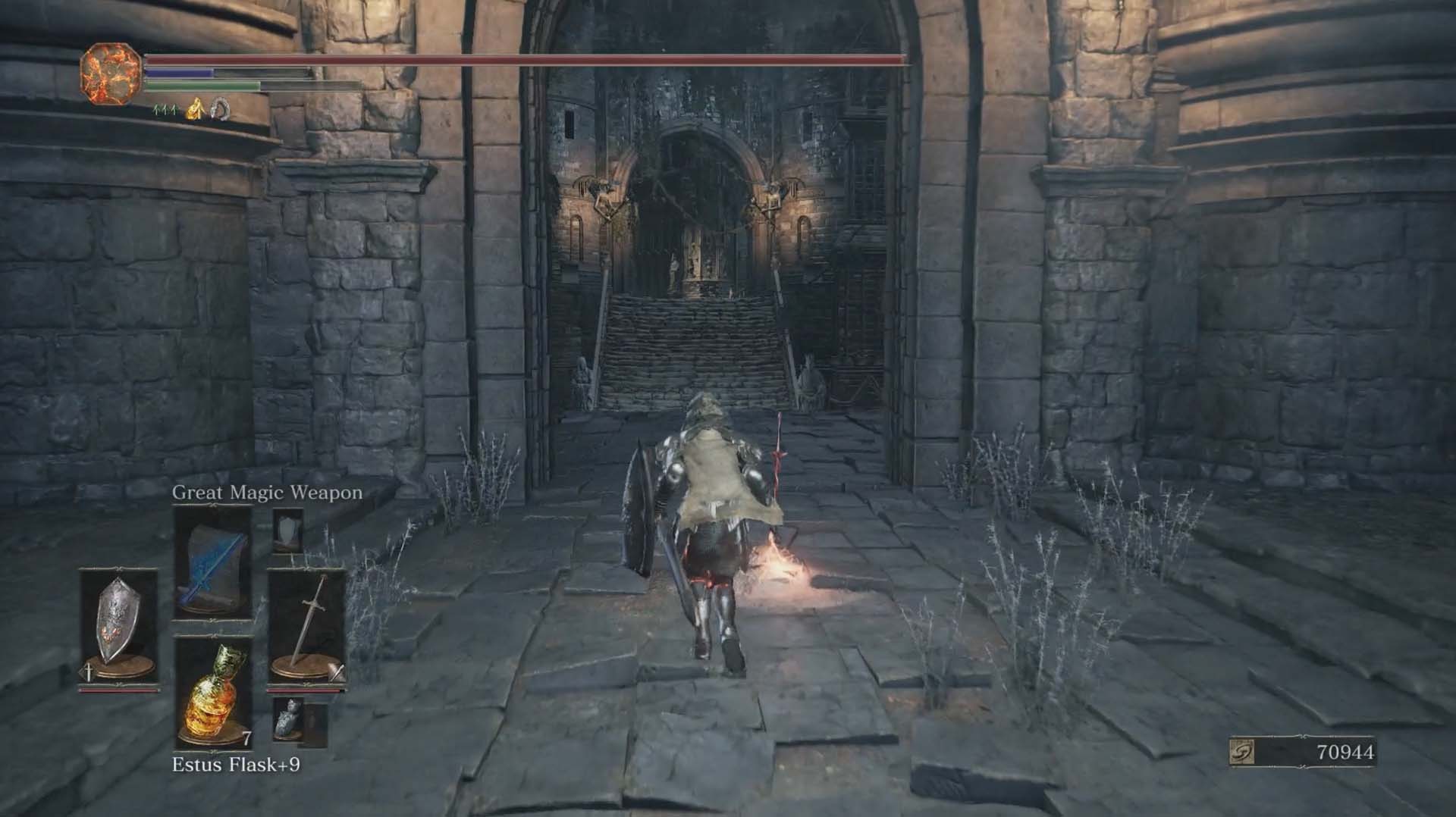 After defeating the Dancer of the Boreal Valley, use the Basin of Vows. Then climb up the ladder that unfurls.

At the intersection at the top of the ladder, go forward, up the steps into the castle. Make a left if you wish to go on the path to go to the Consumed King's Garden and, in turn, the Untended Graves.

When you've reach the top of the steps, both a Lothric Knight and a Devout of the Deep will come for you. The Devout will prioritize buffing the knight, making the mage extremely vulnerable, so target him first. After you've dealt with them, grab the Soul at the altar. Make a right at the altar and go up the steps guarded by two more Lothric Knights. You can catch a breather in the next area as it includes a bonfire.

From this bonfire room, you have two paths to choose from. Using the doorway opposite the doorway you came in will lead you further along the critical path. Making a right will lead you back to the intersection at the start of this area.

Staying on the critical path will lead you to a room with a fireplace straight ahead and a balcony on the left. A Titanite Chunk is at the corpse on the balcony, while an Armor of Prayer set is at the right side of the room. 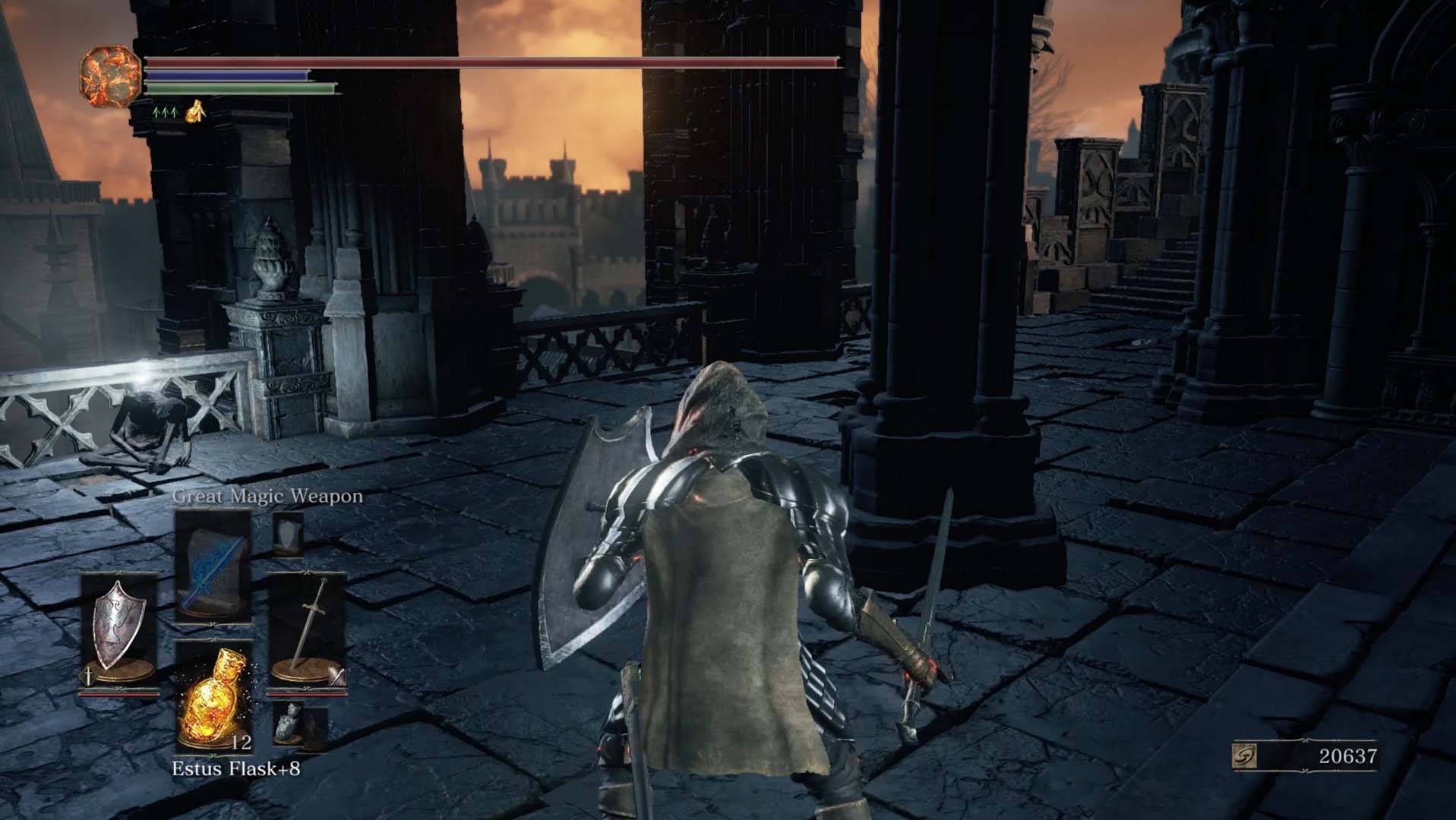 While facing the balcony, look right to find the next path and a squad of Hollow Soldiers. These include archers and soldiers who will throw potions to temporarily disable your estus flasks. Go up the various ascending sets of stairs. 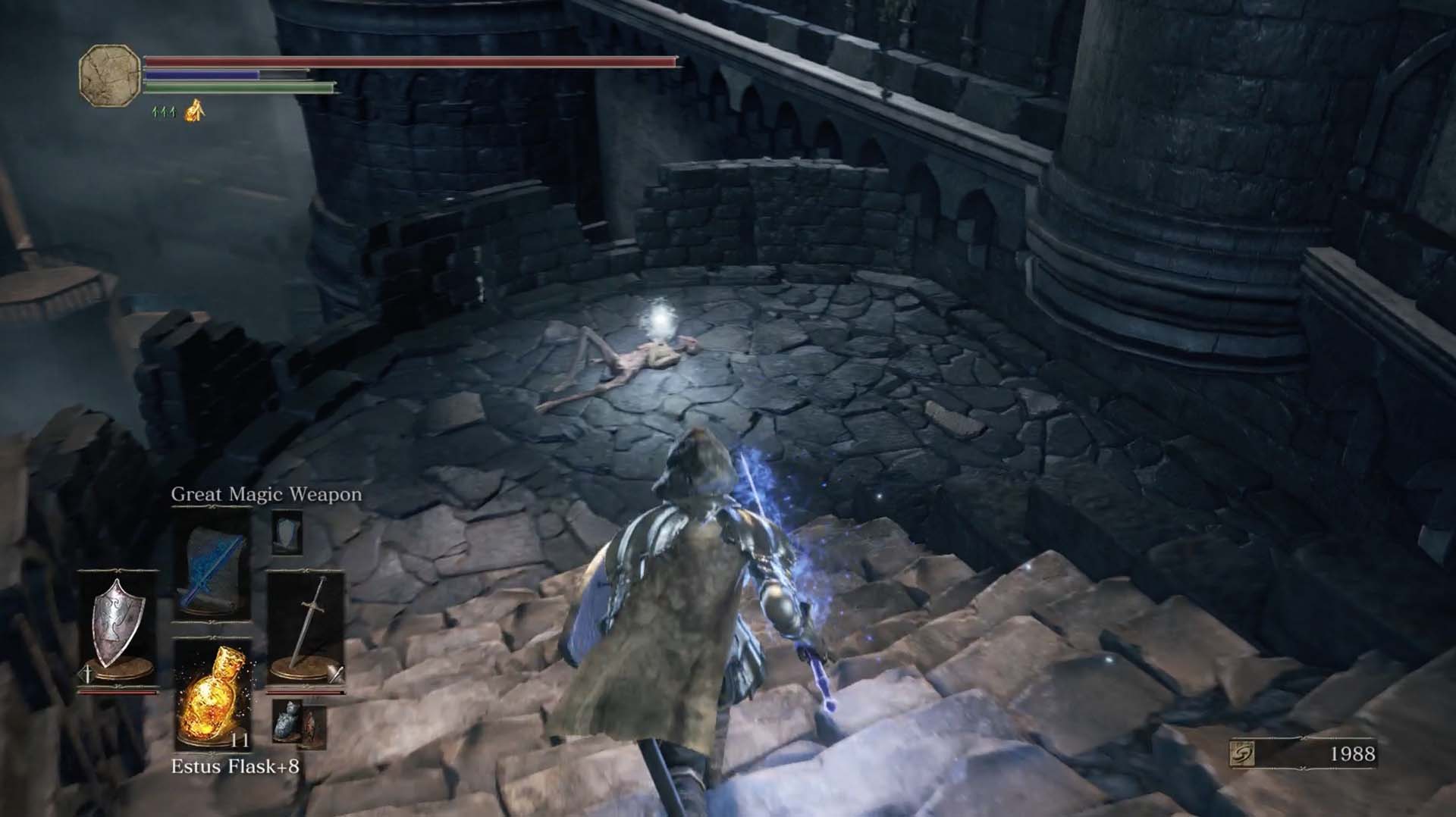 Look around the three small circular sections of this part of the castle exterior for three Titanite Chunks and a Soul. 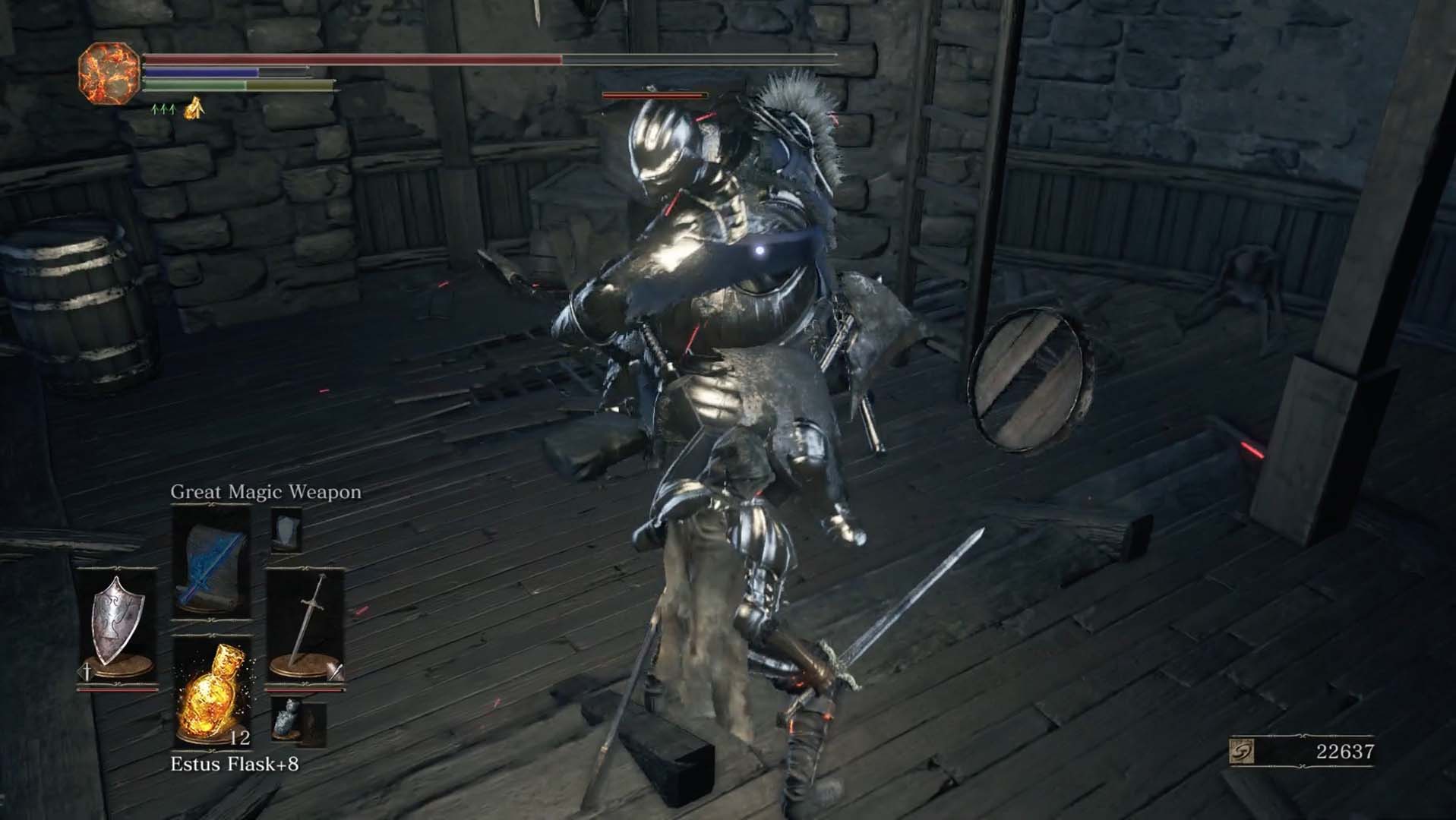 There’s also a room to your right after going up the first set of stairs. Inside is a Twinkling Titanite and an ambush by a Winged Knight from above. This knight is particularly fast and brutal with its combos, but if you toggle on the lock-on, his aggressiveness will allow you to swing around him for attacks at the rear. 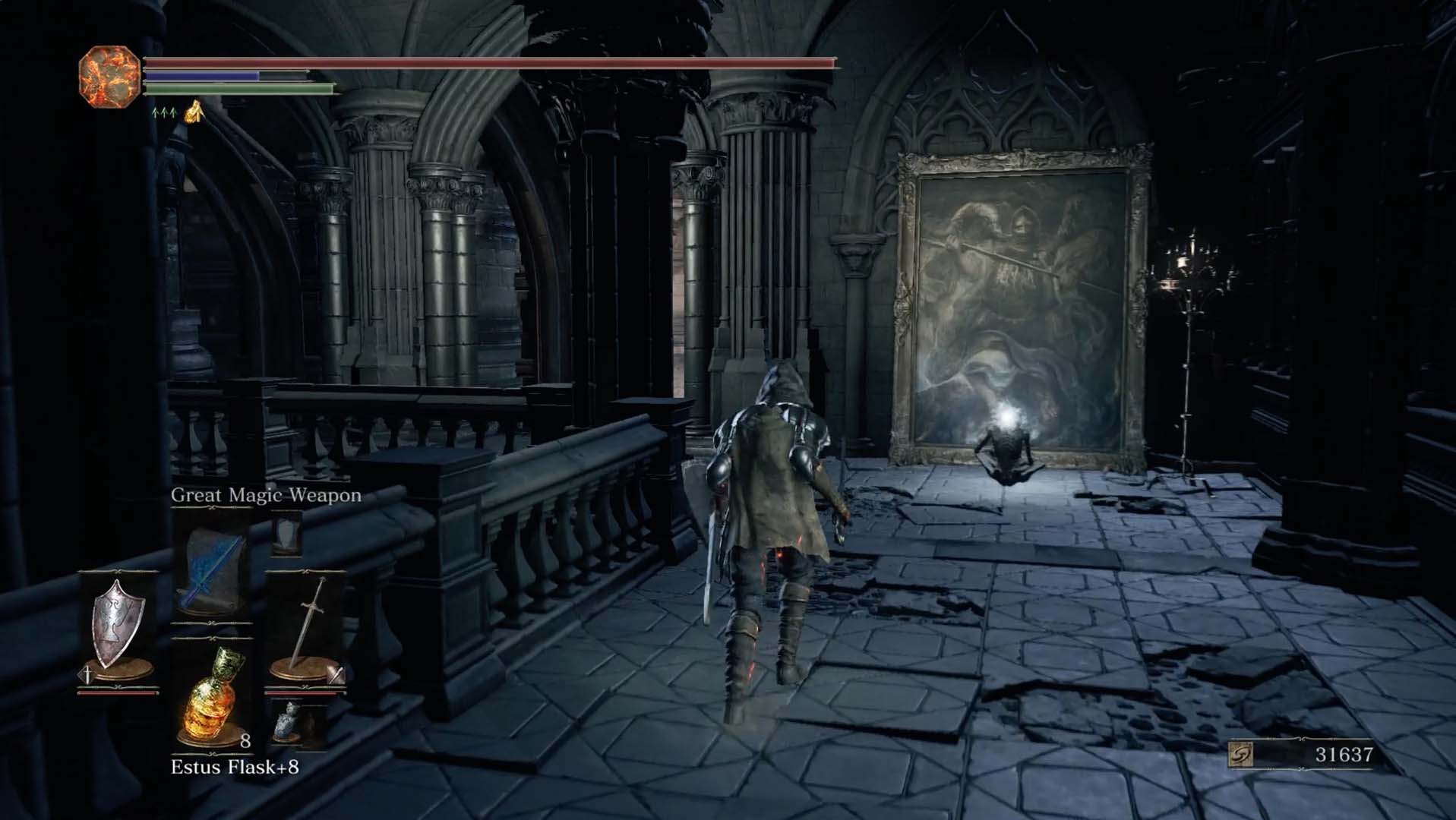 After defeating it, climb up the ladder in the room. Hit the far left wall to access a secret area. Grab the Winged Knight Gear and Sacred Bloom Shield. 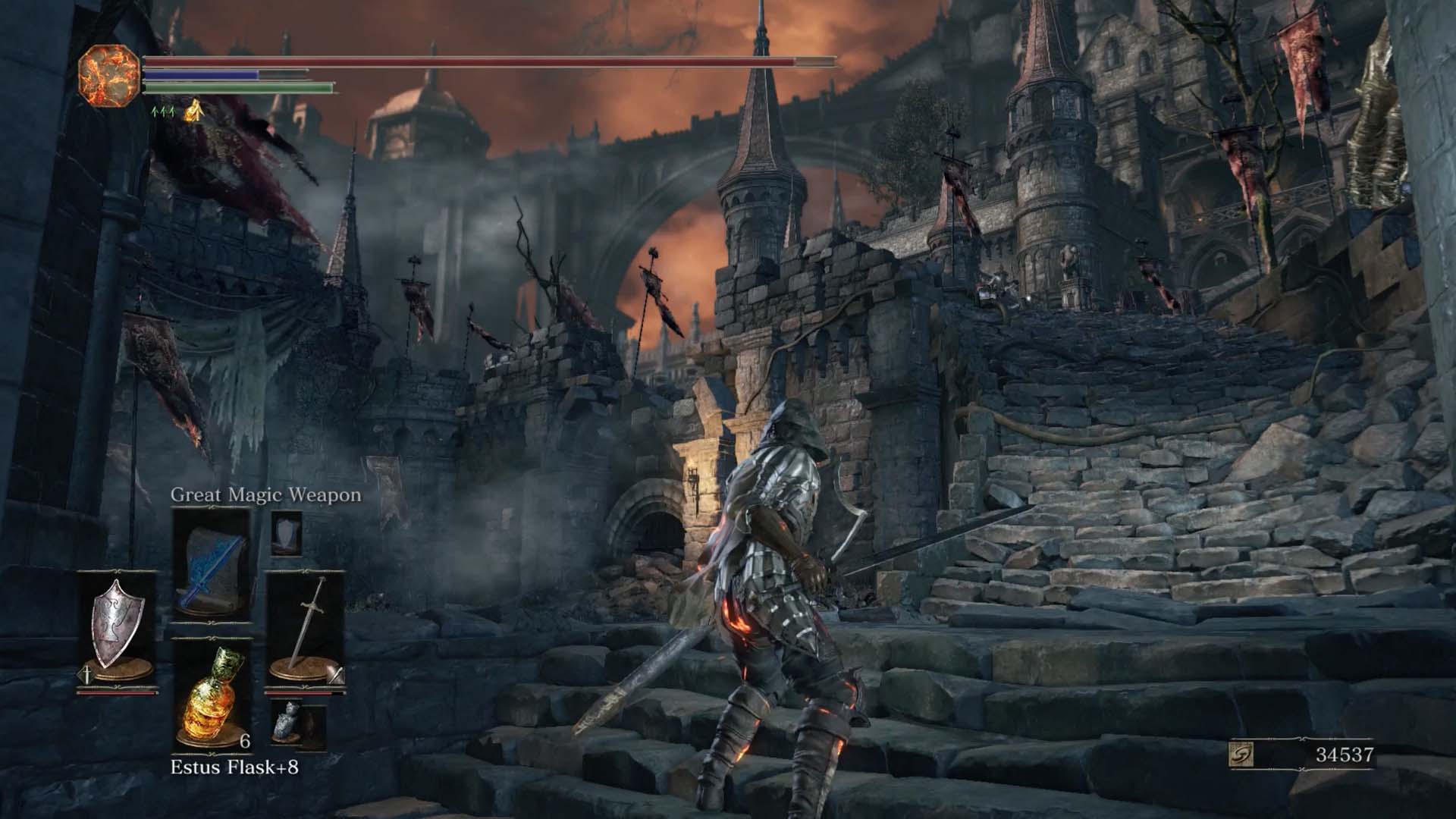 Head back to the main path, where the stairs continue to ascend and more Hollow Soldiers come after you. This path will curve right. After you pass the second arch, look to the left for the next bonfire. As you approach the bonfire, there will be an Ember to your left.

Go through the arch next to bonfire and go up the stairs on the right. Make a U-turn to the left to a ledge overlooking the bonfire. Grab the Greatlance after defeating the Lothric Knight guarding it. 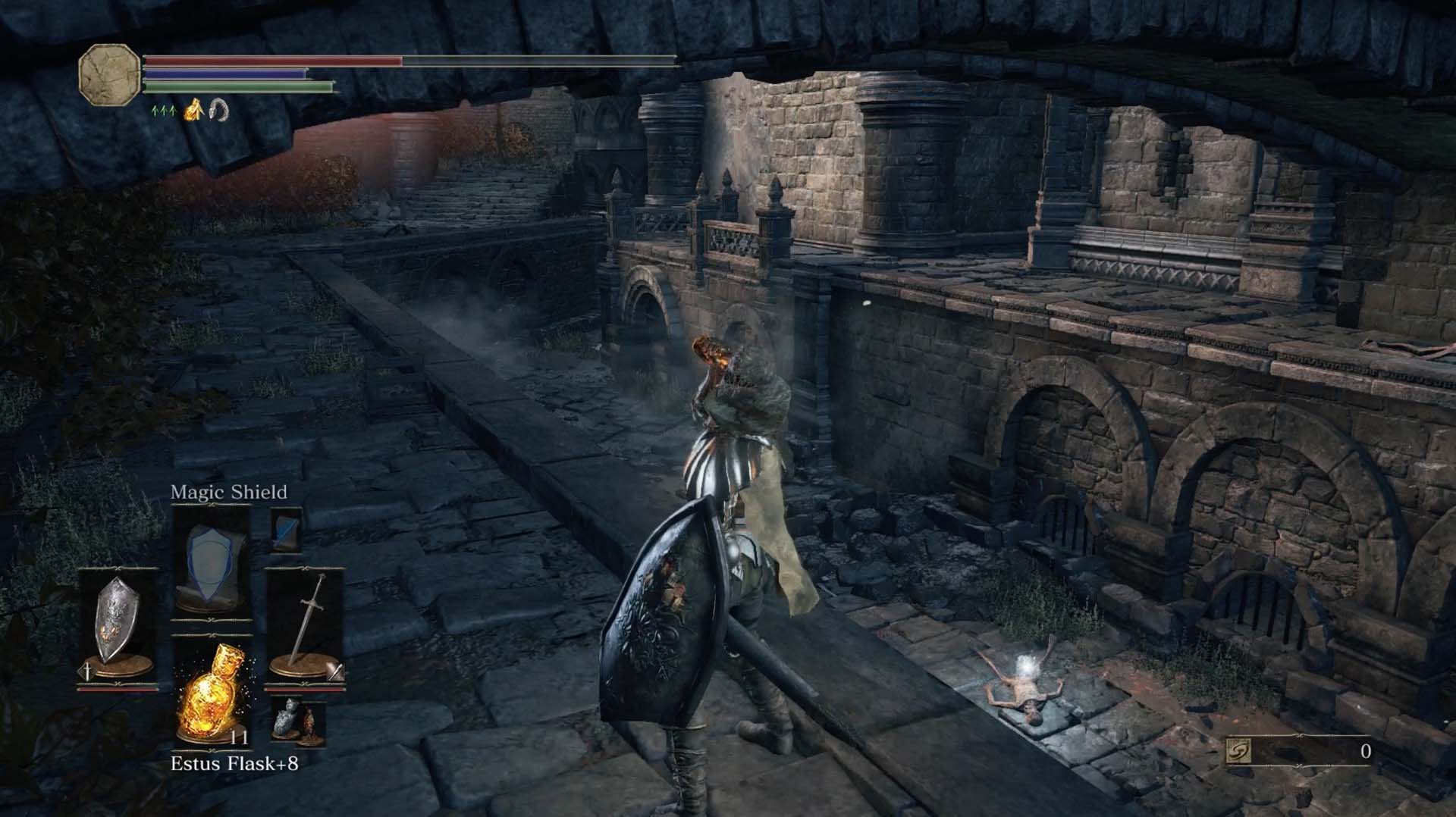 Turn around and approach the bridge on the right. As the second Lothric Wyvern flies in to join the other Wyvern, jump off the bridge to the upper level of the two-tiered area under the bridge, specifically on side of the bridge furthest from the Wyverns. Grab the Titanite Chunk on the ledge before dropping down. Note that there is also an Undead Bone Shard at the upper ledge on the opposite side. 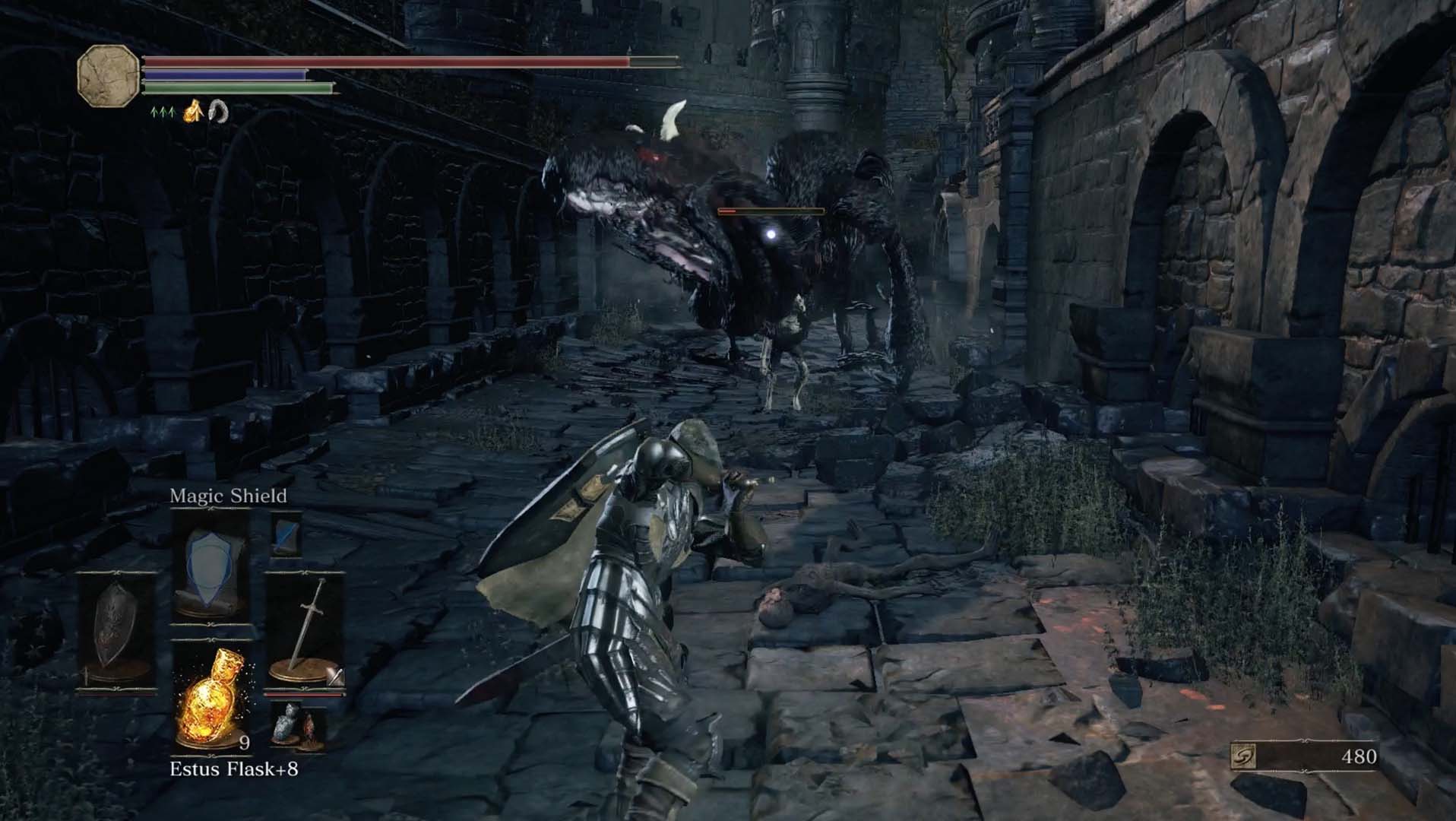 This area has two Pus of Men, some Hollow Soldiers and a Winged Knight. Grab the two Titanite Chunks at the bottom level underneath the bridge. While facing in the direction of the dragon, turn left and take on a Pus of Men. Around the corner are two Twinkling Titanites. Then head to the opposite side of this narrow section and go through the doorway. In the next room, look for the glowing light behind the boxes. Break the boxes and grab the three Lightning Urns. 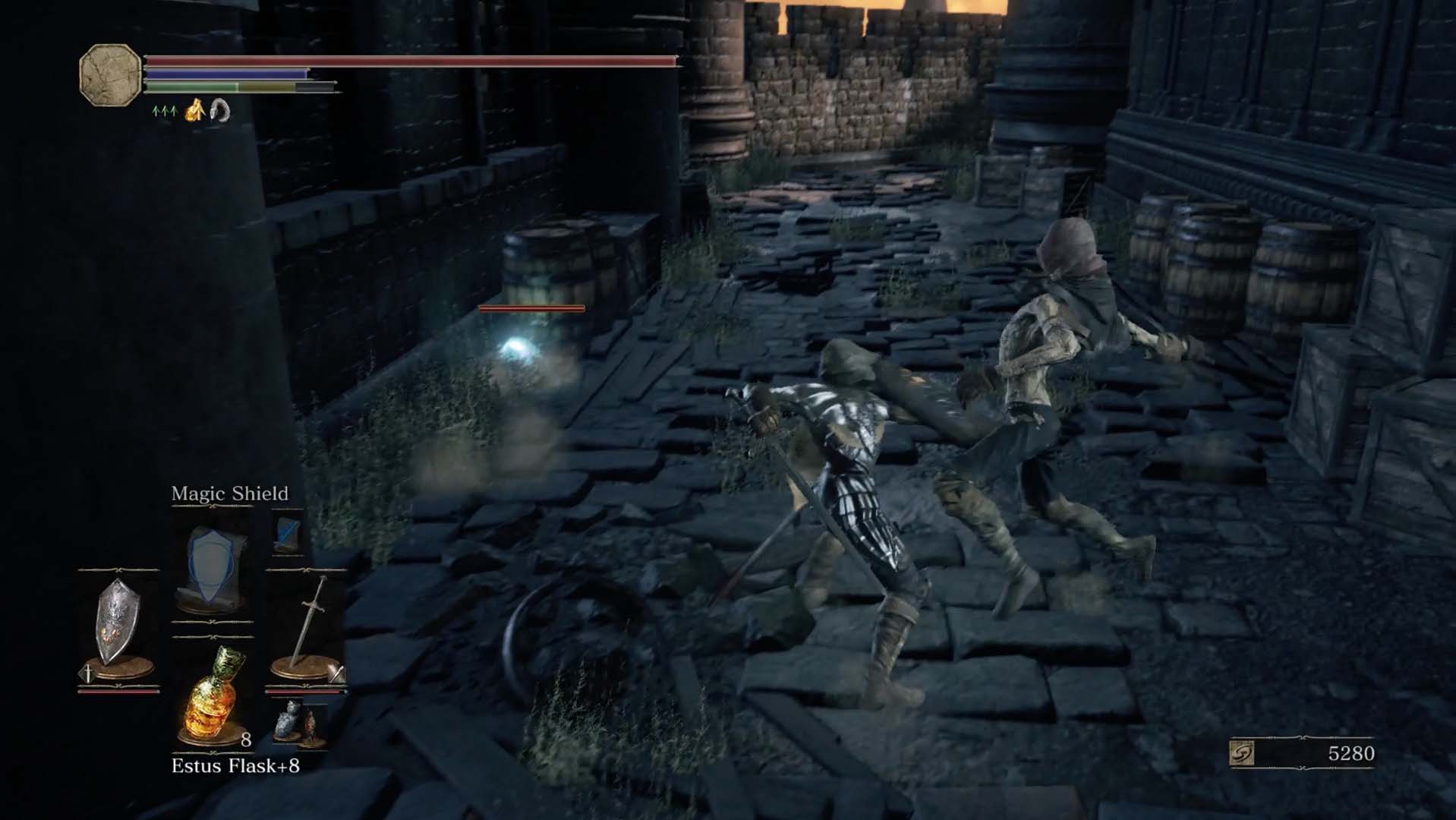 Go through the next doorway, make a right and chase down the Crystal Lizard for two Twinkling Titanites. Prepare for an ambush by a couple Hollow Assassins. Three more assassins will appear as you continue along this path. There’s also a Soul on the ledge overlooking the Dragon Barracks bonfire in the distance. 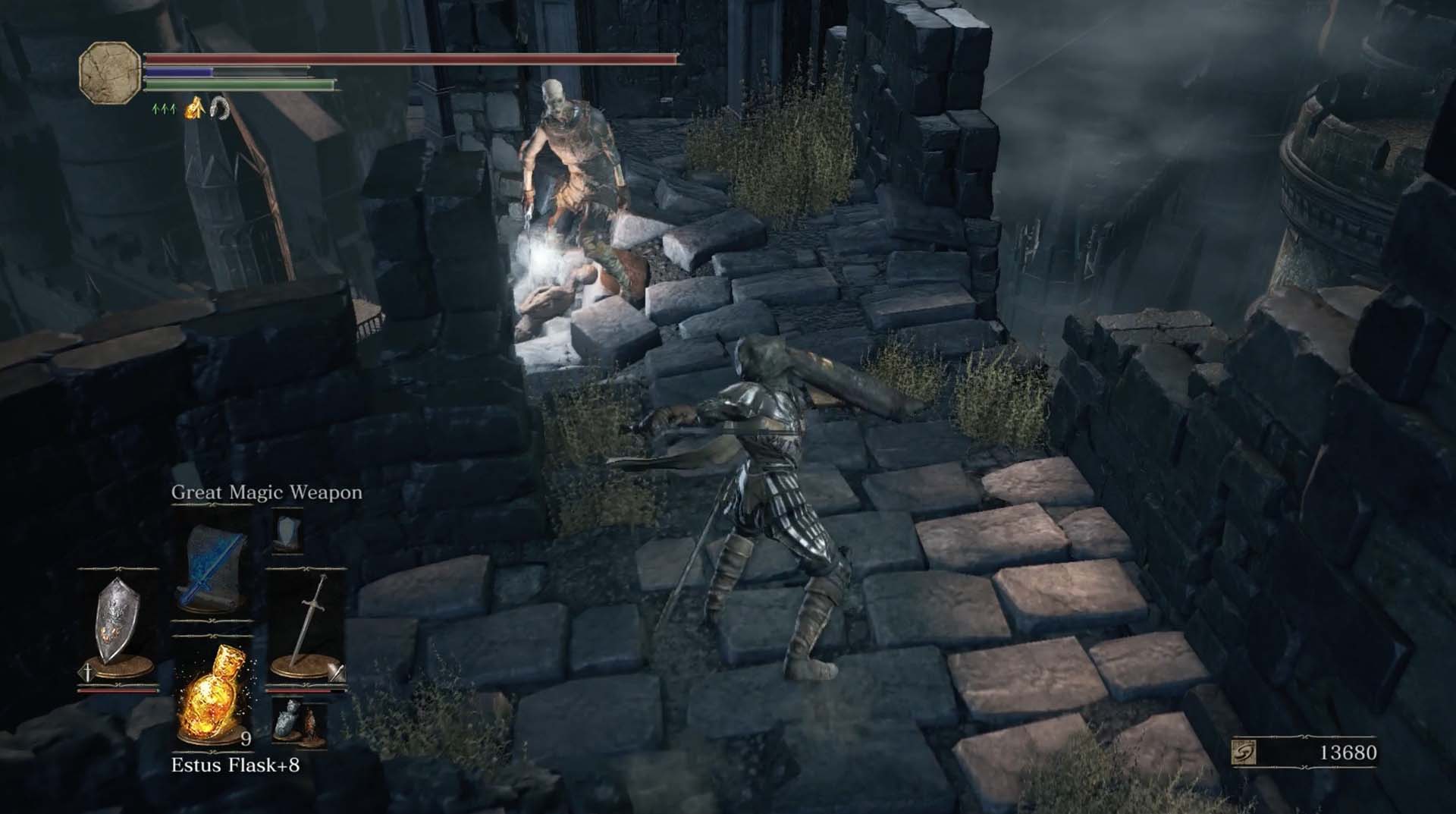 Going up the stairs will lead you to a Winged Knight. Go along the path where the Winged Knight came from and grab the Sniper Crossbow and Sniper Bolts. 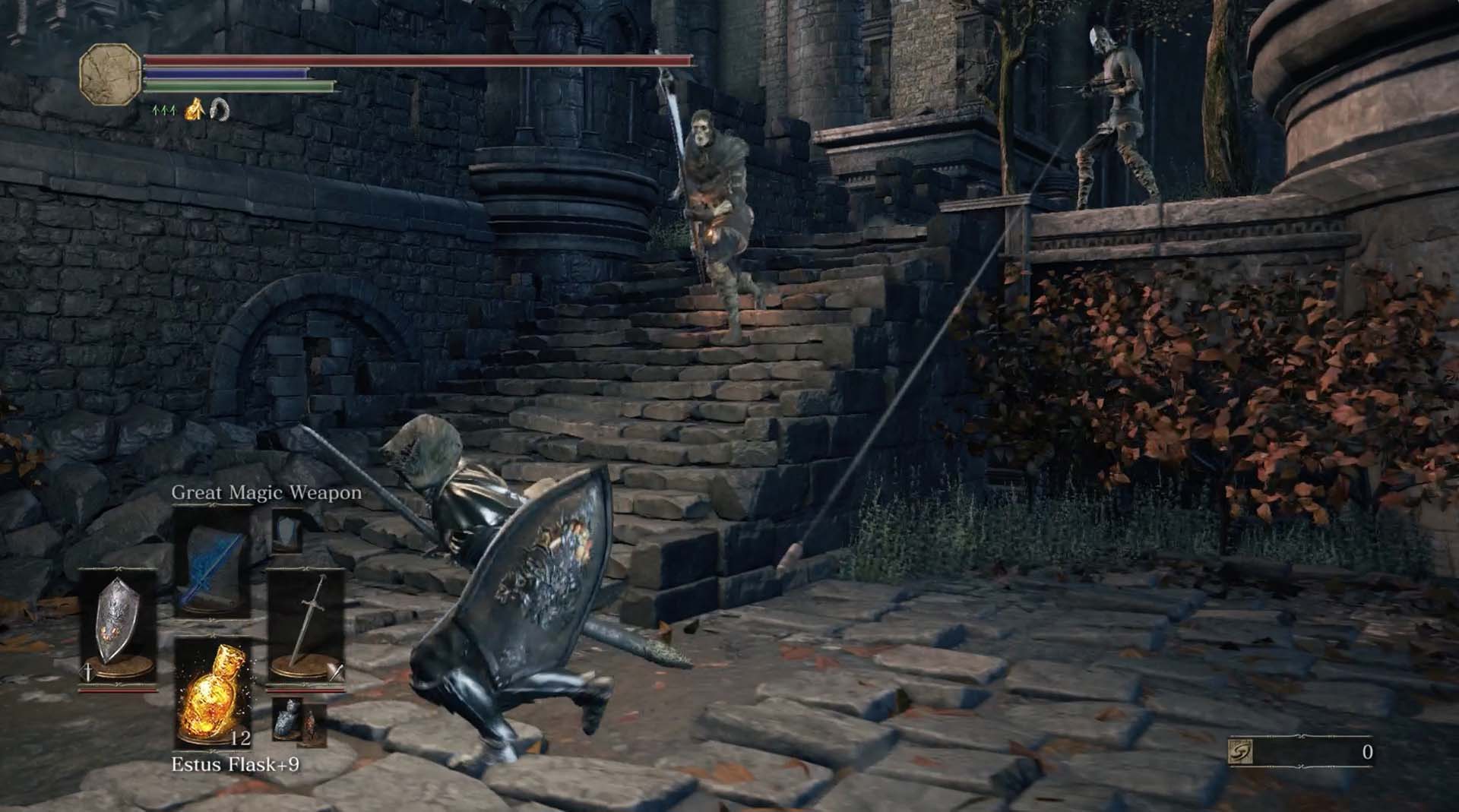 To get back on the critical path, drop down again to the first ledge below the bridge. Head left, where you'll find four Hollow Soldiers. Make the first available right turn through the doorway and up one more flight of steps. Grab the Soul by the skinny column and a Raw Gem to the right. 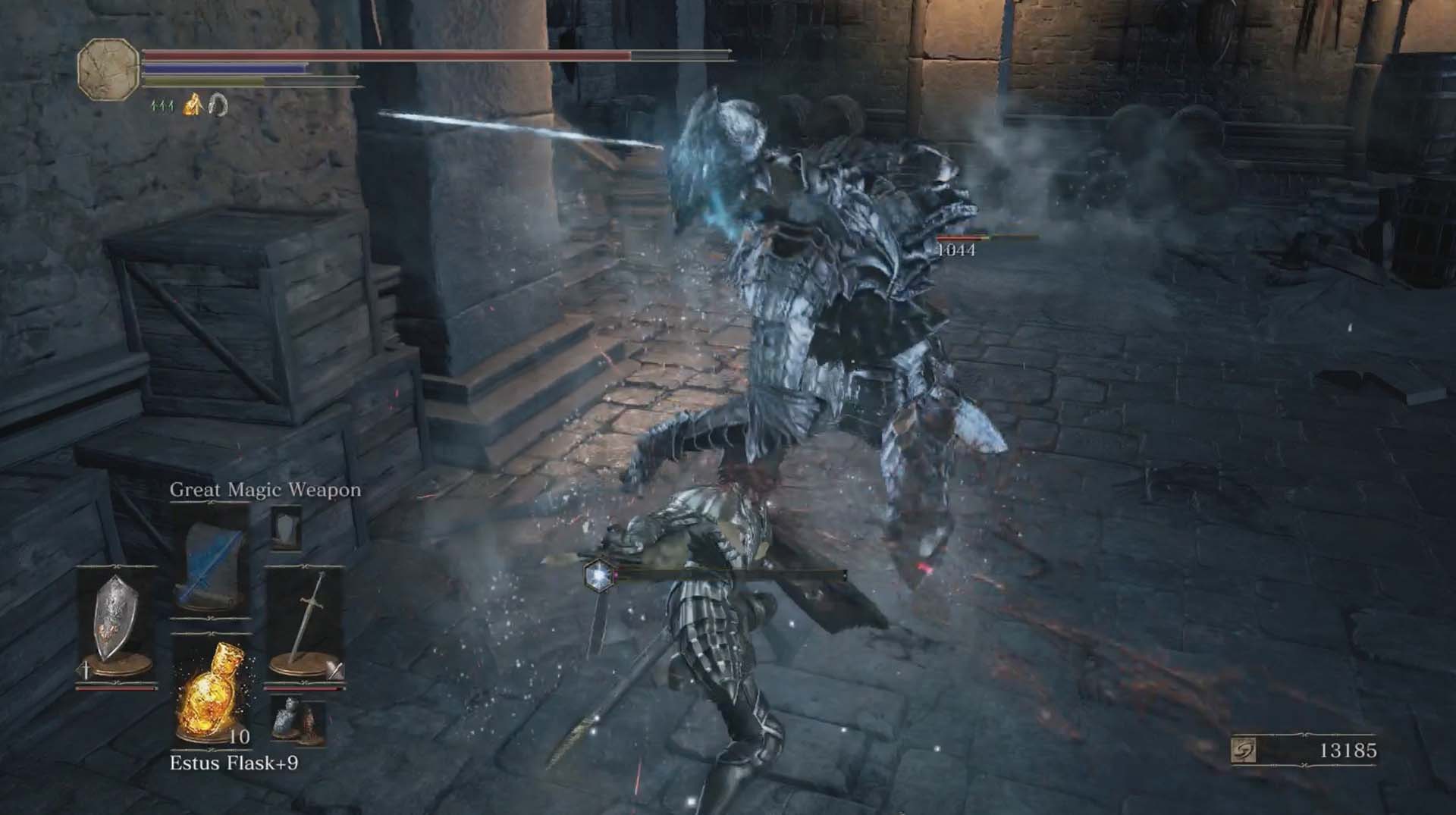 The downward stairs to the right of the doorway you just passed through leads to a Boreal Outrider Knight. It moves on fours like Vordt of the Boreal Valley and is very agile. Rely on your lock-on to get behind the knight. When defeated, grab the Spirit Tree Crest Shield, three Titanite Scales and the Twinkling Titanite in the room. 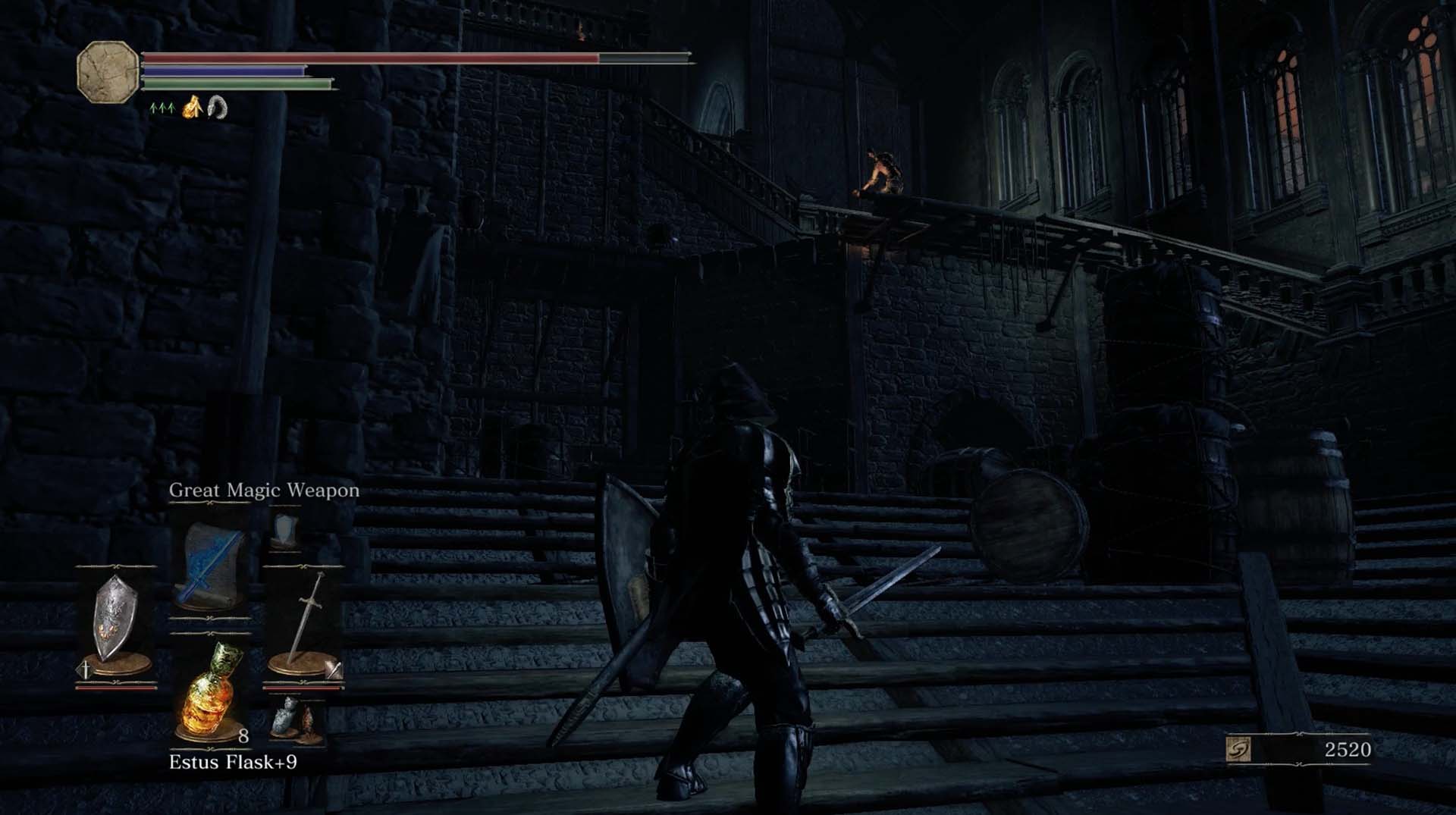 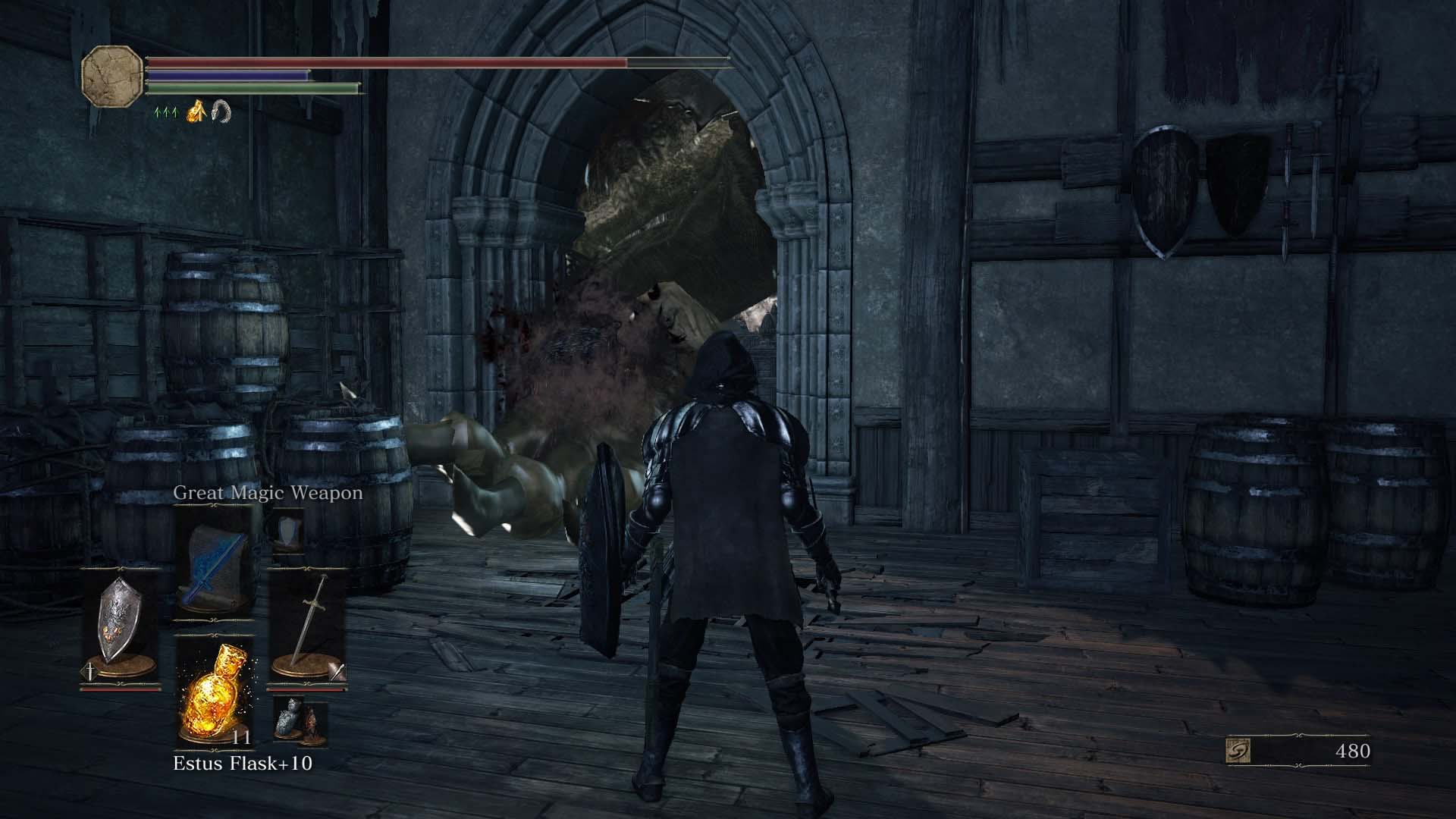 Go back into the large three-tier room and attack the Wyvern claw jammed through the doorway. After a few hits, the claw will turn into a large black pus. Use distance attacks like arrows and firebombs to kill it. This will kill both Wyverns in the process. Grab the two Titanite Chunks, the two Embers and the Large Titanite Shards. Now you can explore the wide pathway that the Wyverns were protecting with their fire attacks. There you’ll find an Ember, a Refined Gem, a Titanite Scale, and six Lightning Urns. Then return to the large three-tier room. 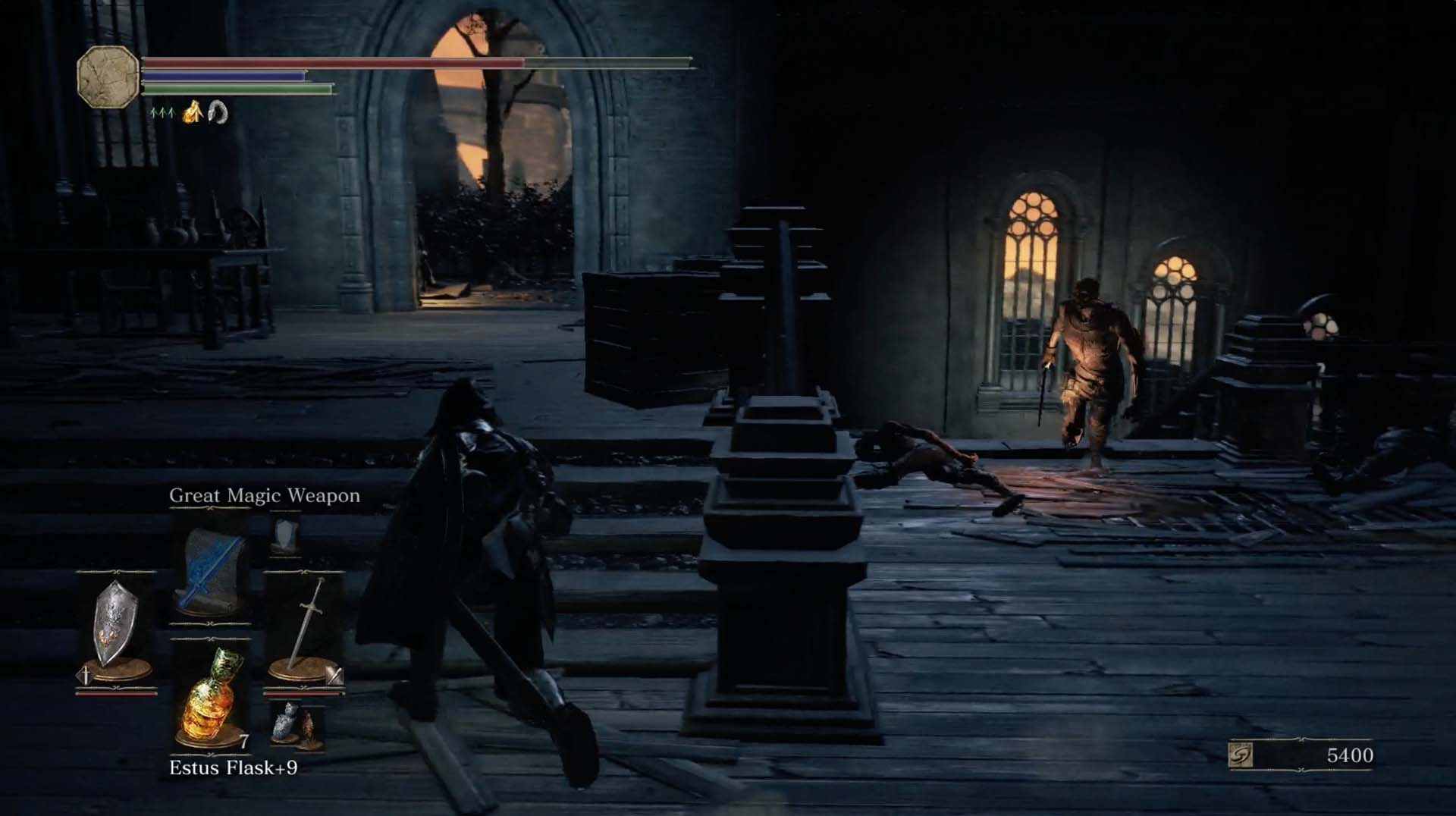 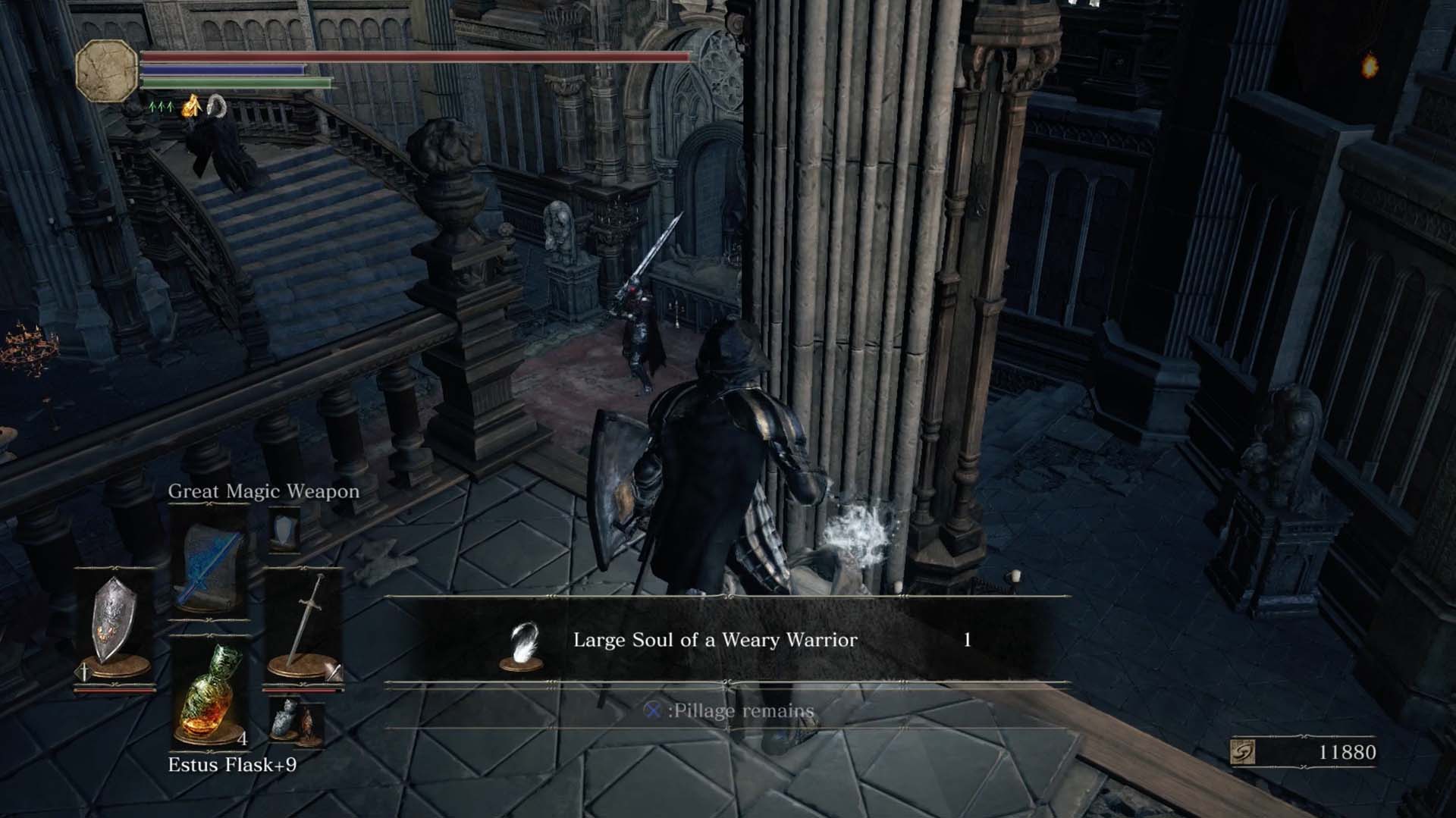 Go through the doorway opposite the doorway leading to the courtyard. You are now in the inner castle foyer. Walk forward and activate the switch. This will open the entrance to make all future visits easier. Turn right, grab the Soul and make a U-shaped path around the foyer, dealing with the Lothric Knight and Lothric Mage along the way. 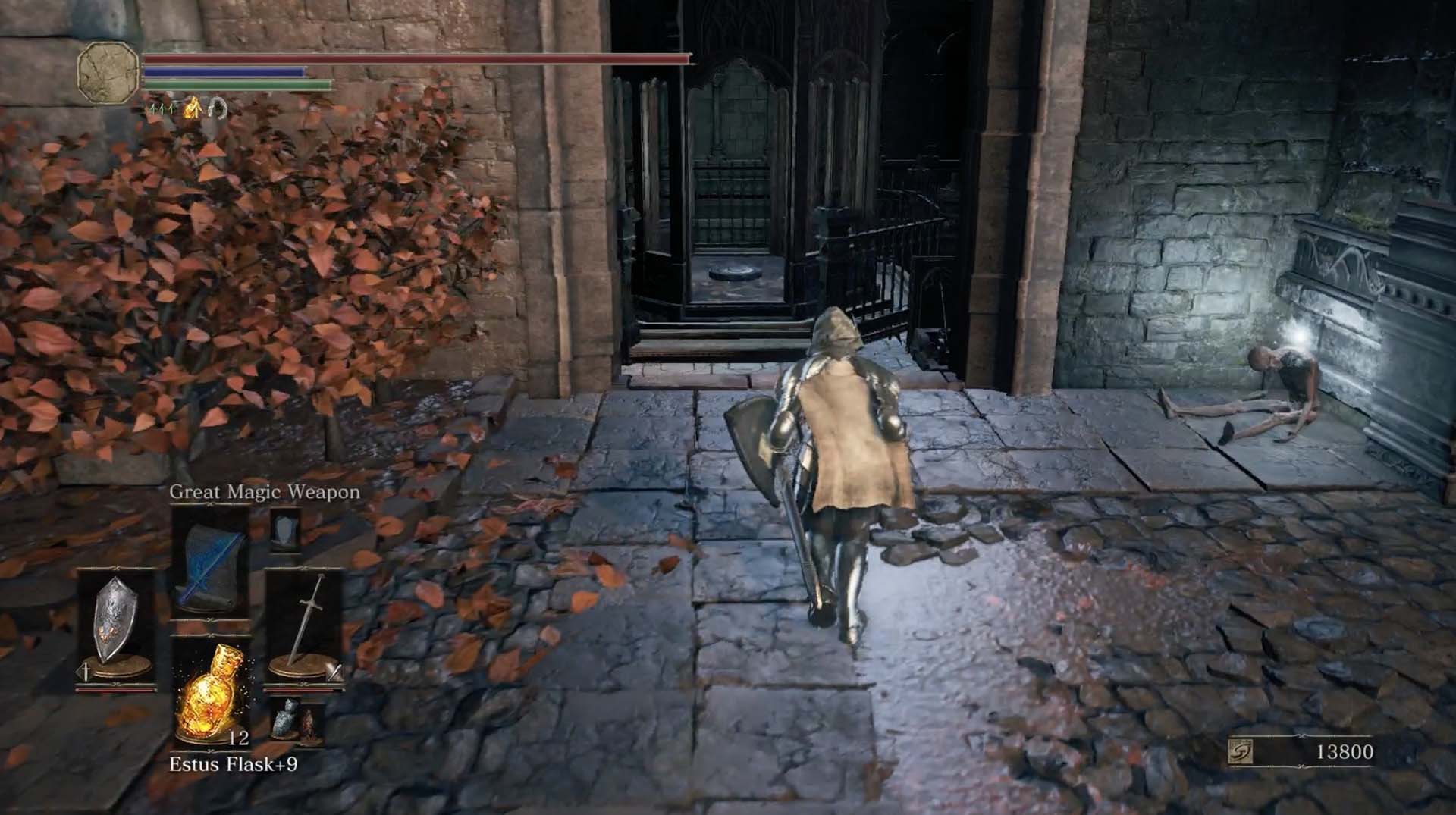 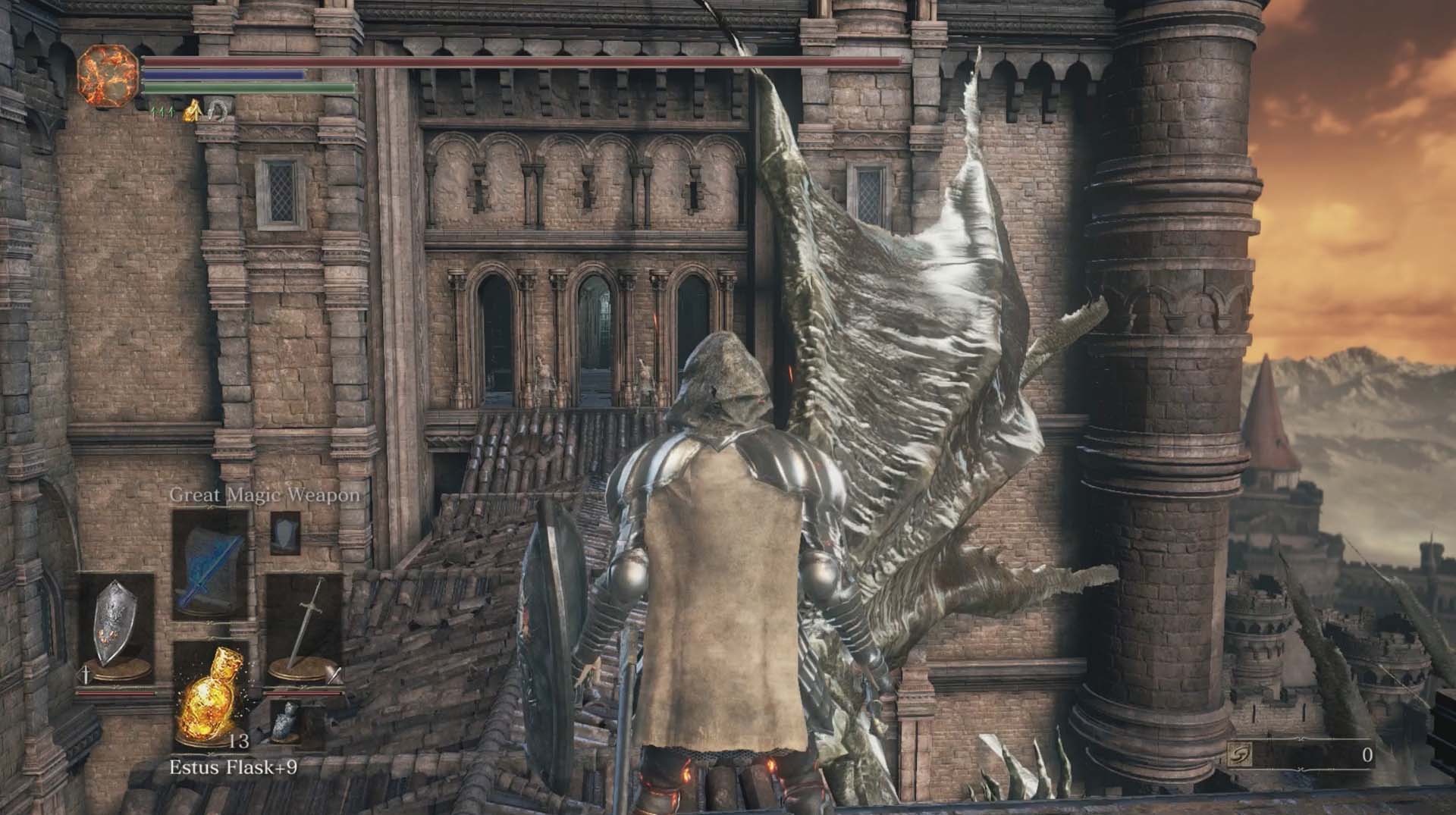 Climb up the ladder. Grab the Titanite Chunk at one of the corners of the rooftop. Cross the narrow connecting rooftop and take on the Hollow Soldiers. Go into the library and take the ladder down. Grab the Knight’s Ring in the library and head down the walkway guarded by the Lothric Knight. 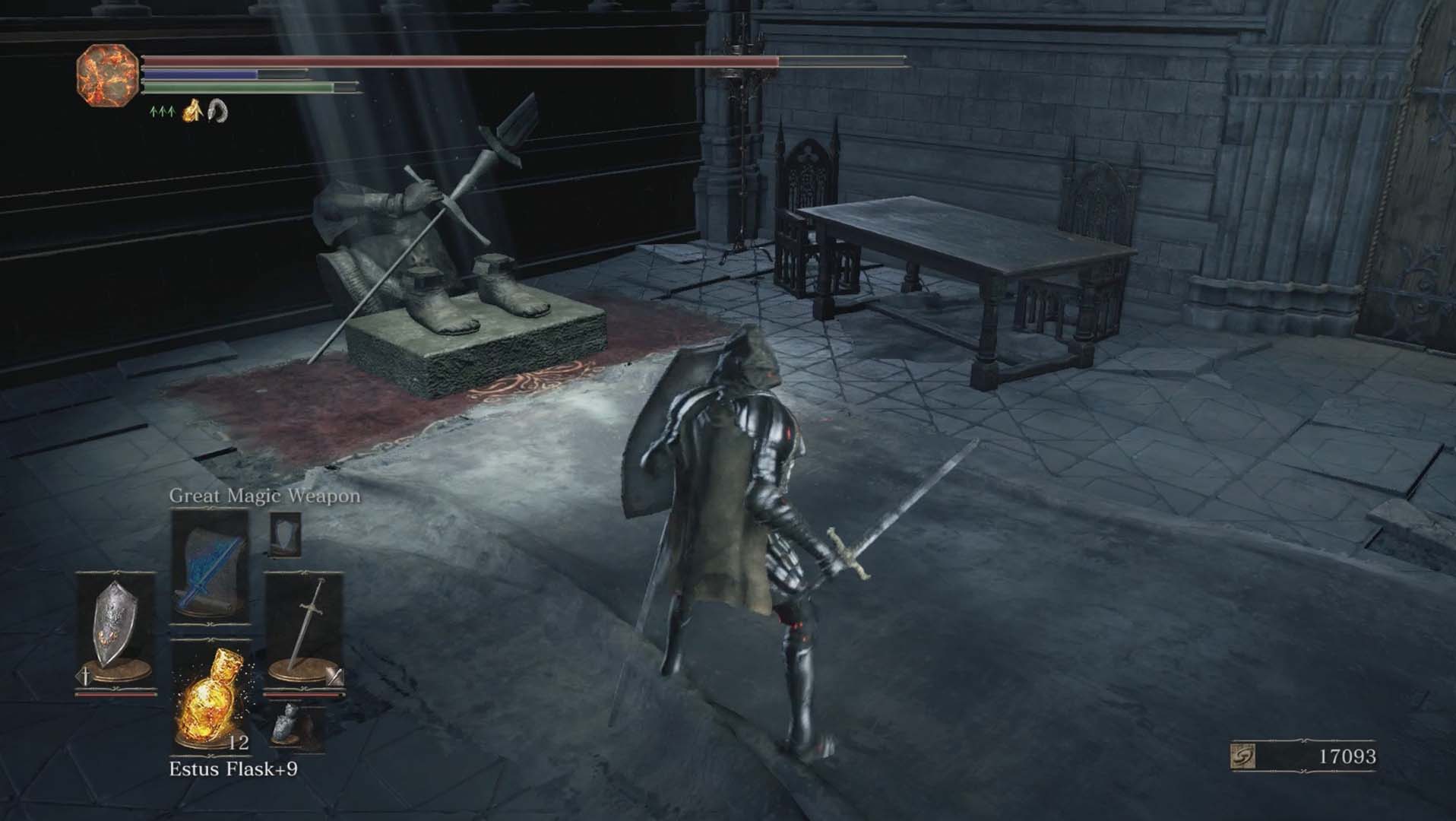 Enter the next room and grab the Praise The Sun pose by the Altar of Sunlight and the three Titanite Scales in the chest. By offering Sunlight Medals to the Altar, you can improve your current covenant faction. Opening the doors ahead will bring you back to the area with the elevator. 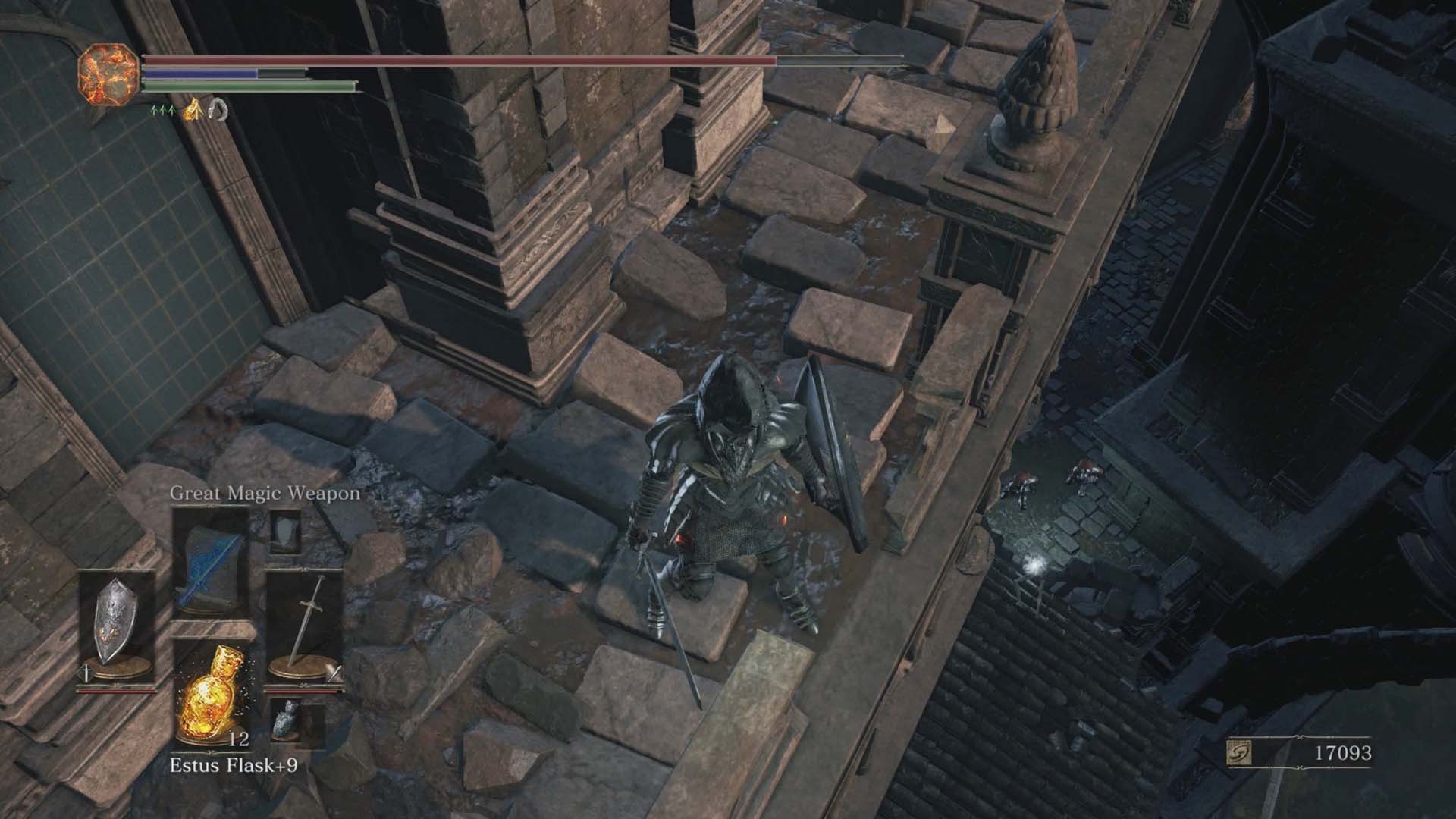 Before going through the foggy gate to the next boss fight, enter the doorway to the right. Go to the second level, grab the Titanite Scale in the chest on the right and exit left to the narrow ledge. Make a right and grab the Red Tearstone Ring. Go left and drop from the break in the ledge. Drop down to a lower rooftop and grab the Caitha's Charm. Drop down again and take on two Lothric Knights. Go down the path and make two lefts. This will bring you back to the foyer. Go up the steps, make a left, then a right to return to the area right before the foggy door.

Tactics (first phase): This boss is all about brute force. Its shield makes its left side practically invincible so its only frontal opening is on its right. There's just a matter of defending yourself against its aggressive blade strikes. Its most common attack is a three-hit combo that starts with two wide sweeps and then a downward blow. It also uses backhanded combos with its shield. It is likely that its various attacks will destroy the stone barriers on both sides of the map. Be mindful of this as you might get knocked off.

Tactics (second phase): You know the Dragonslayer Armour is in its second phase when it briefly falls to its knees. You can get a couple swings in before it gets up. The boss is not electrified, making its first phase combos all the more powerful. If you're bold, you can roll through its new, long reaching, wide arch attack or you can just keep your distance. Be sure to get out of the boss' way when it holds its blade straight up. It's about to deal a massive downward blow. Another attack that is easy to anticipate is the dragging uppercut, since the Dragonslayer Armour needs a running start. If you need a breather, make a brief retreat to the fountain in the middle of the map. You can buy yourself a couple seconds to recover if you're on the opposite side of the fountain in relation to the boss. Lastly, watch out for the red ghost skulls raining from the red dragon skeletons.