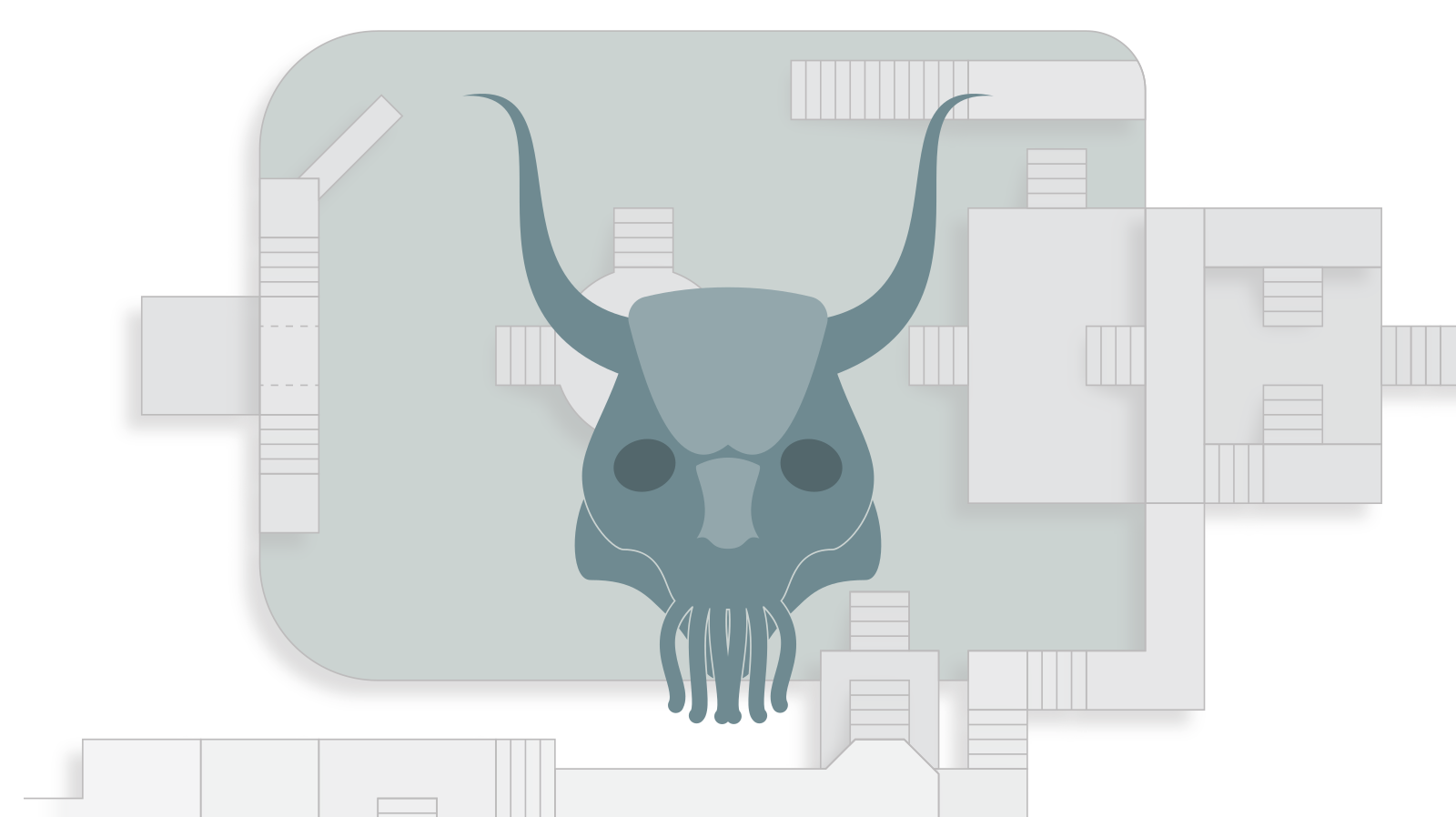 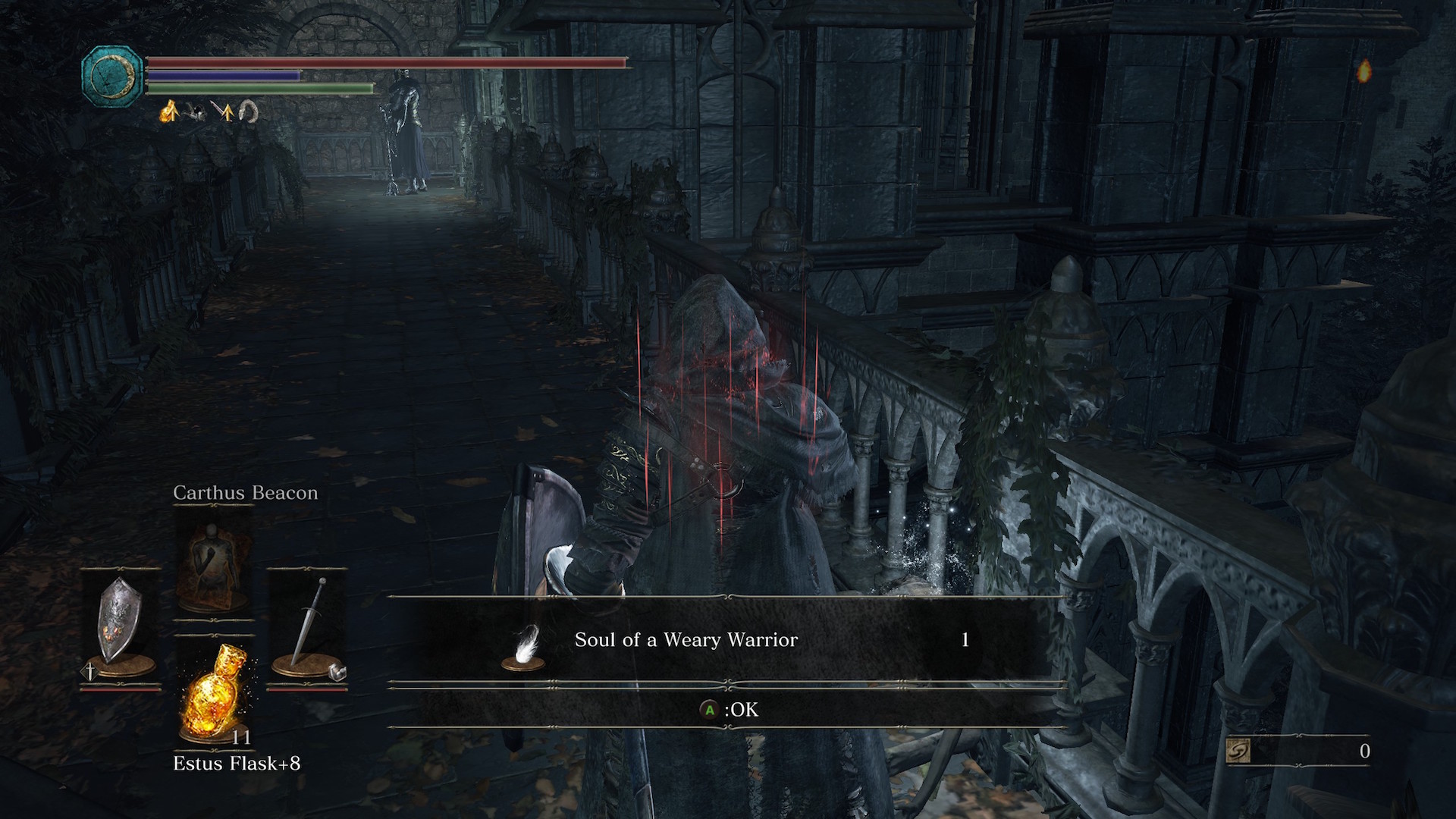 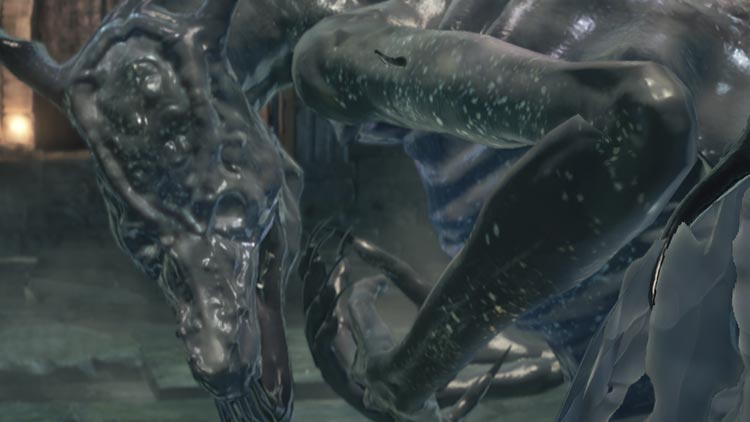 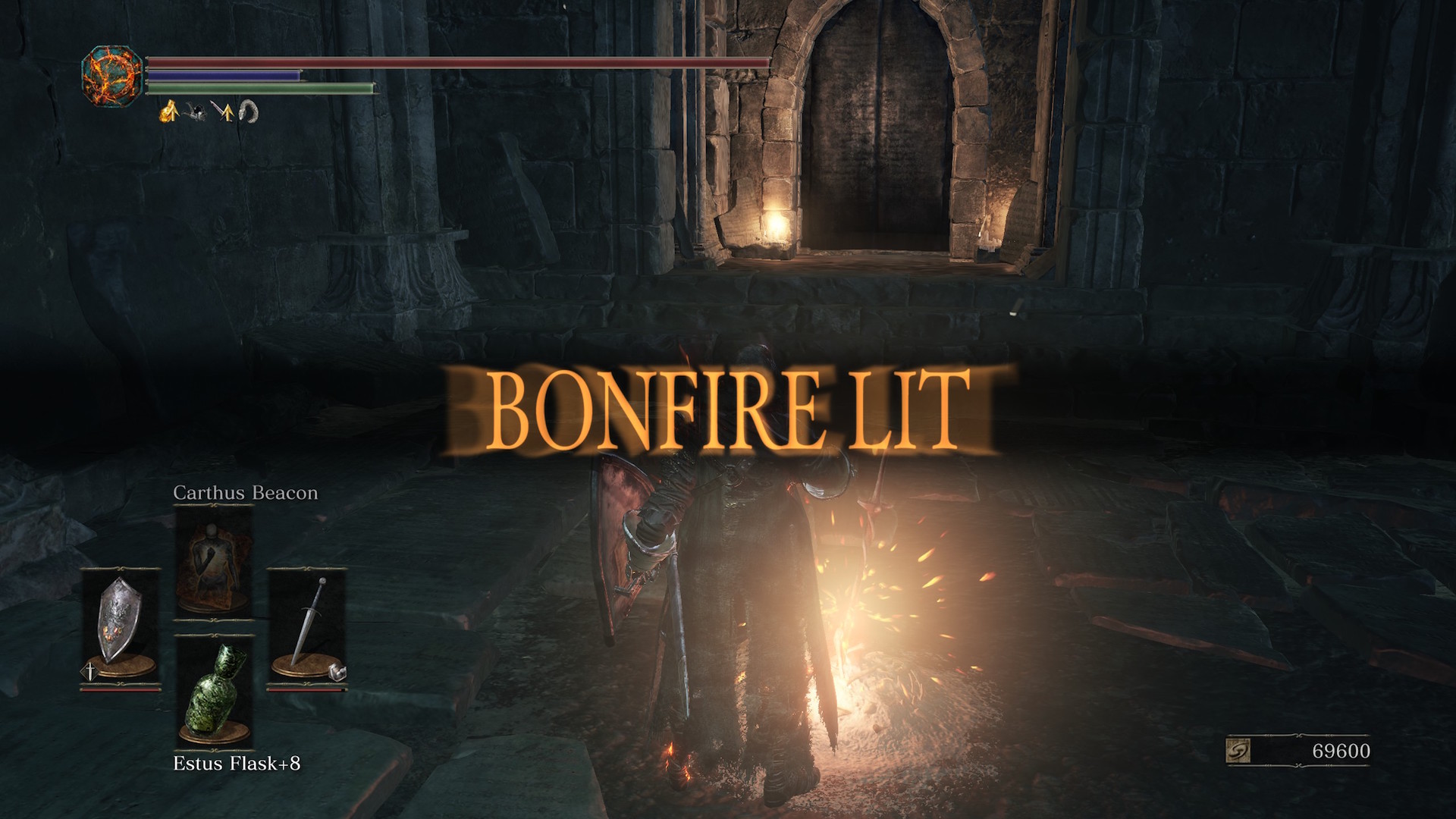 Start your journey to the garden right at the Dancer of the Boreal Valley bonfire. Go up the ladder and immediately turn left — it's easy to miss, but this is the start of a brand new, optional area and a path that eventually leads to three bosses.

Grab the Soul of the Weary Warrior without aggroing (getting the attention of) the knight enemy. Feel free to slip past him immediately as he isn't blocking the door, and run onto the elevator to trigger it.

Note that you can use the elevator trick here: Walk back onto the contraption to send it back up, then run forward into the new zone — the Consumed King's Garden. This is beneficial because if you die, you can simply run back from the bonfire and immediately grab the elevator again without having to wait for it, avoiding the knight entirely on repeated runs.

Alternatively, you can also roll off the front while the elevator is descending onto the ledge in front of you and get the Dragonscale Ring. Proceed to the ground level, but beware of the toxic ground below you. This status effect is crippling and can overcome you in seconds. To avoid it, tread lightly and run to the nearest area of solid ground, then wait for the debuff meter to run out. Don't bother equipping or wasting items to get rid of it. The bonfire is so close to the boss that you'd be going in crippled anyway, having used any healing items.

If you want to heal toxic, you can use the Blooming Purple Moss Clump and Divine Blessing items or the Caressing Tears miracle. 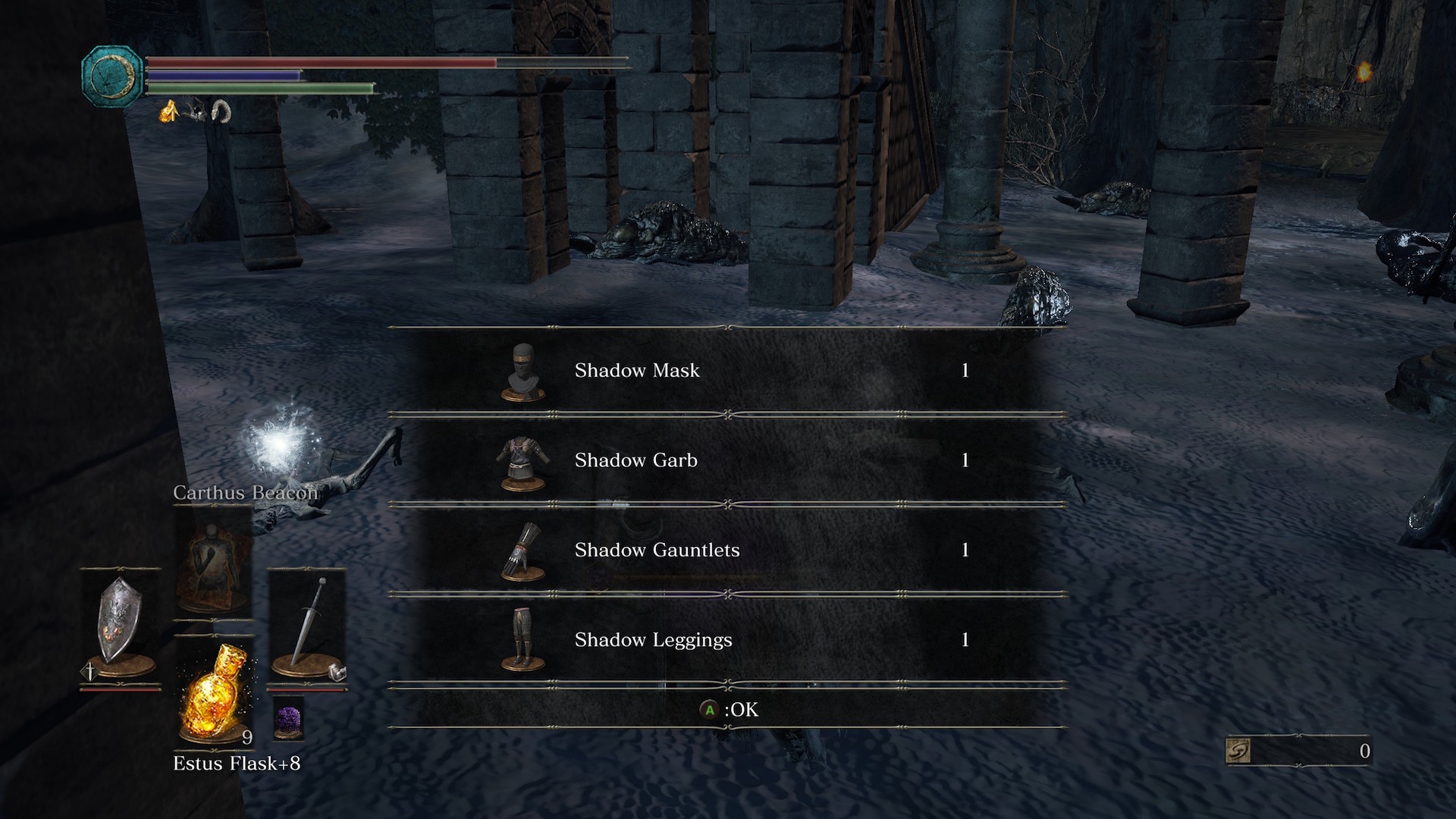 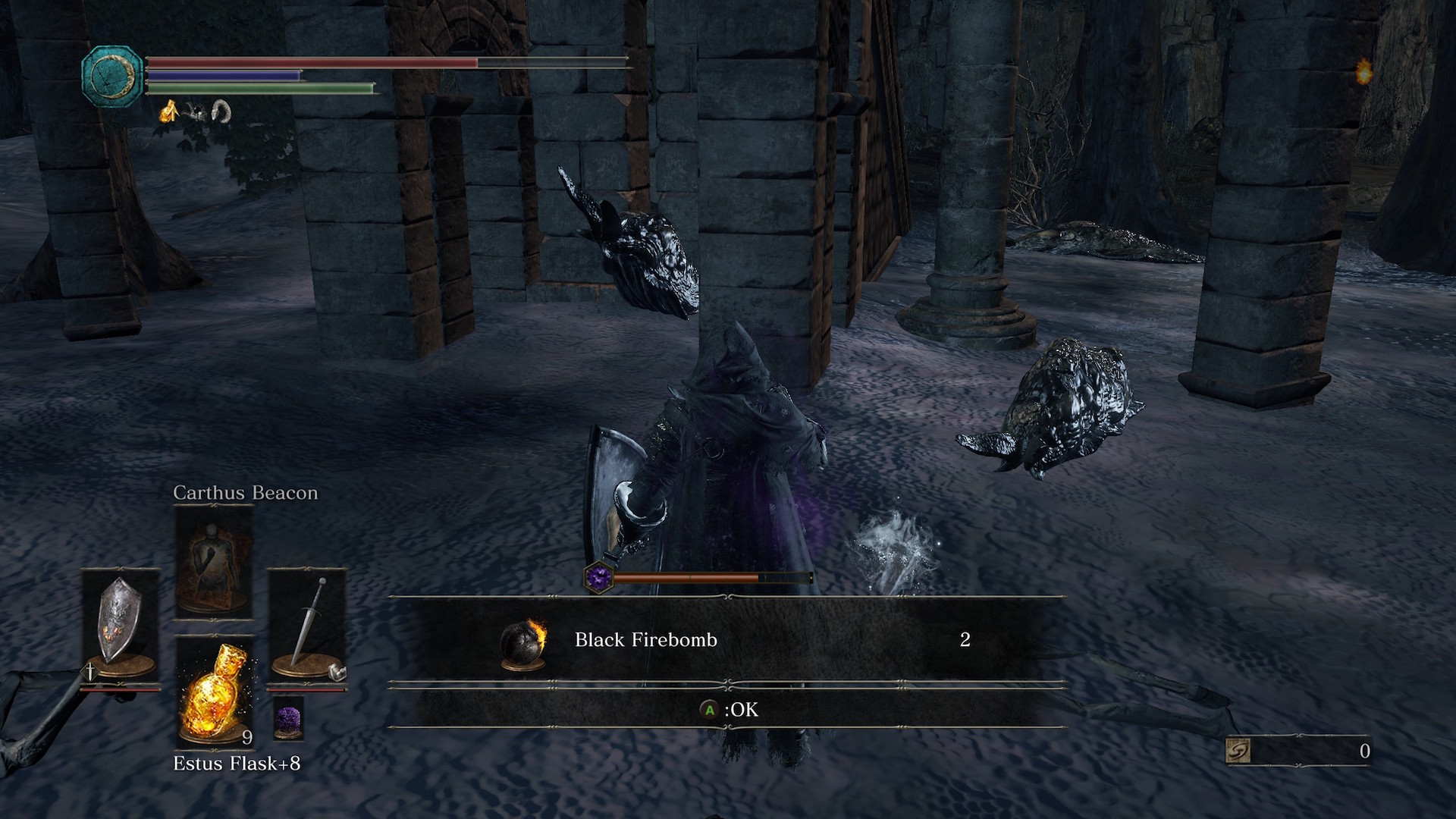 Run underneath the temple-like area right in front of you to grab a Shadow Mask, Shadow Garb, Shadow Gauntlets and Shadow Leggings armor set, as well as a Black Firebomb and a Claw. Note that enemies in this zone do a ton of damage even to endgame characters. These hulking monstrosities patrol back and forth and have a small aggro range, so waiting for them to pass and then booking it is the best option if you want to avoid a fight. If your choose to fight them, though, pyromancies and fire-infused weapons inflict maximum damage.

If you're interested in sheer progress, this area is deceptively brief, so heading directly opposite of the elevator shaft and down the stairwell will lead you to a fog door housing the boss — Oceiros, the Consumed King.

Short version: Try to constantly get behind him and slash his legs.

Tactics (first phase): Oceiros is a very chatty boss, so it's easy to get sidetracked. Turn off subtitles if you prefer. You also don't really need to stress, as he follows the same basic patterns as a lot of the larger enemies in the Souls series, in that he's bulky and hits hard — but not often. A major thing to note is that those who rely on shields will have a far easier time here, as he doesn't hit so hard that it breaks through most guards. Hold your shield up, move behind him and between his legs to avoid many of his attacks. Just keep an eye out for when he raises his hands.

That's your signal to roll out of the telegraphed zone, which will clearly highlight blighted ground in a circular pattern. Merely maintain a medium distance (about four characters worth or length) and wait for the attack to dissipate. Then roll or run back under his legs. Going too far out will ensure that he charges you for multiple hits, however.

Tactics (second phase): When he changes his animation, he is entering the next phase, which should be rather brief. At this point, his tail attack should deter you from going anywhere near him, so side attacks are best. Repeat this process until he goes down.

Alternatively, you can also summon an NPC on the staircase before the boss and use a lightning-based weapon to inflict more damage. Oceiros is a magic-based boss and as such is resistant to magic damage.

Head to the end of the hall, light the bonfire, then open the double doors to the next zone. It's a tunnel that leads to an open room, with a lone bandaged enemy patrolling it. You took down the Consumed King, so you should have no trouble dispatching this plain foe.

Grab the Path of the Dragon gesture as a reward (you'll use this later to get into Archdragon Peak), and the two chests (one to the left, the other at the top of the stairs), both of which provide you with Titanite Scales. Slice the wall behind the latter chest to open up an entrance to a brand new cave area.

Welcome to the Untended Graves.