Archdragon Peak is kind of off the beaten path, so it's best to only go there once you've gotten a grasp on the layout of Irithyll Dungeon. 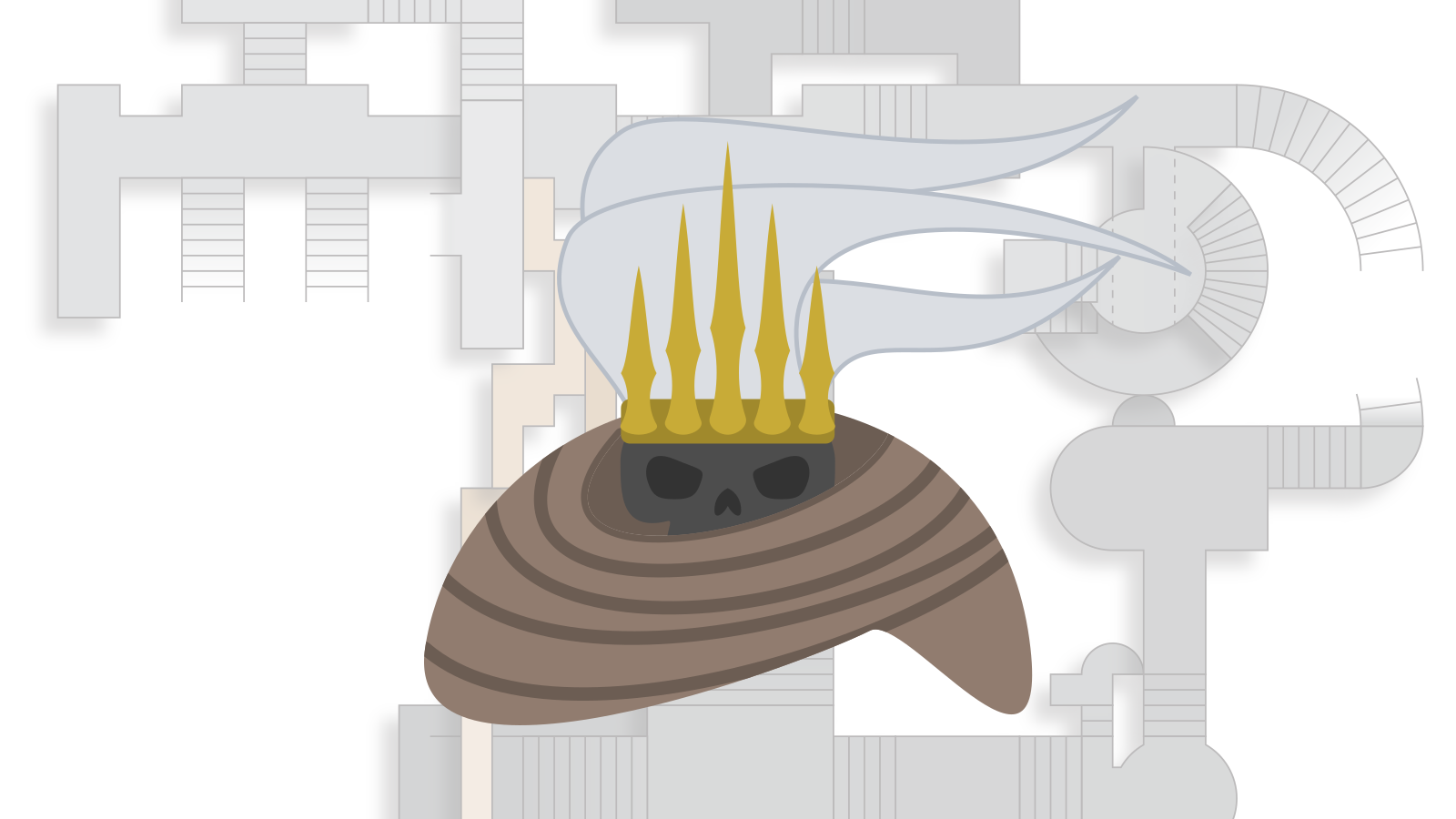 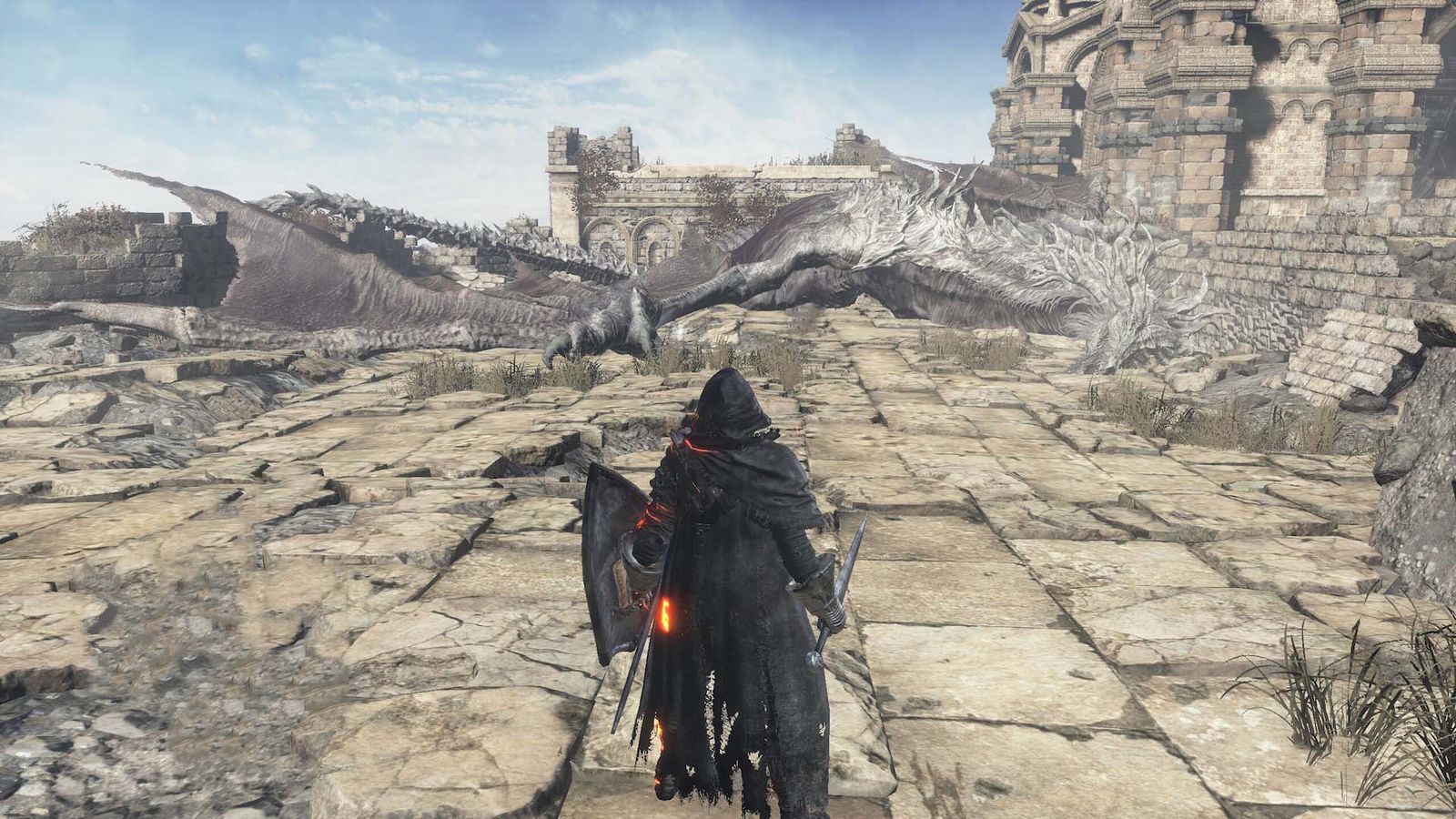 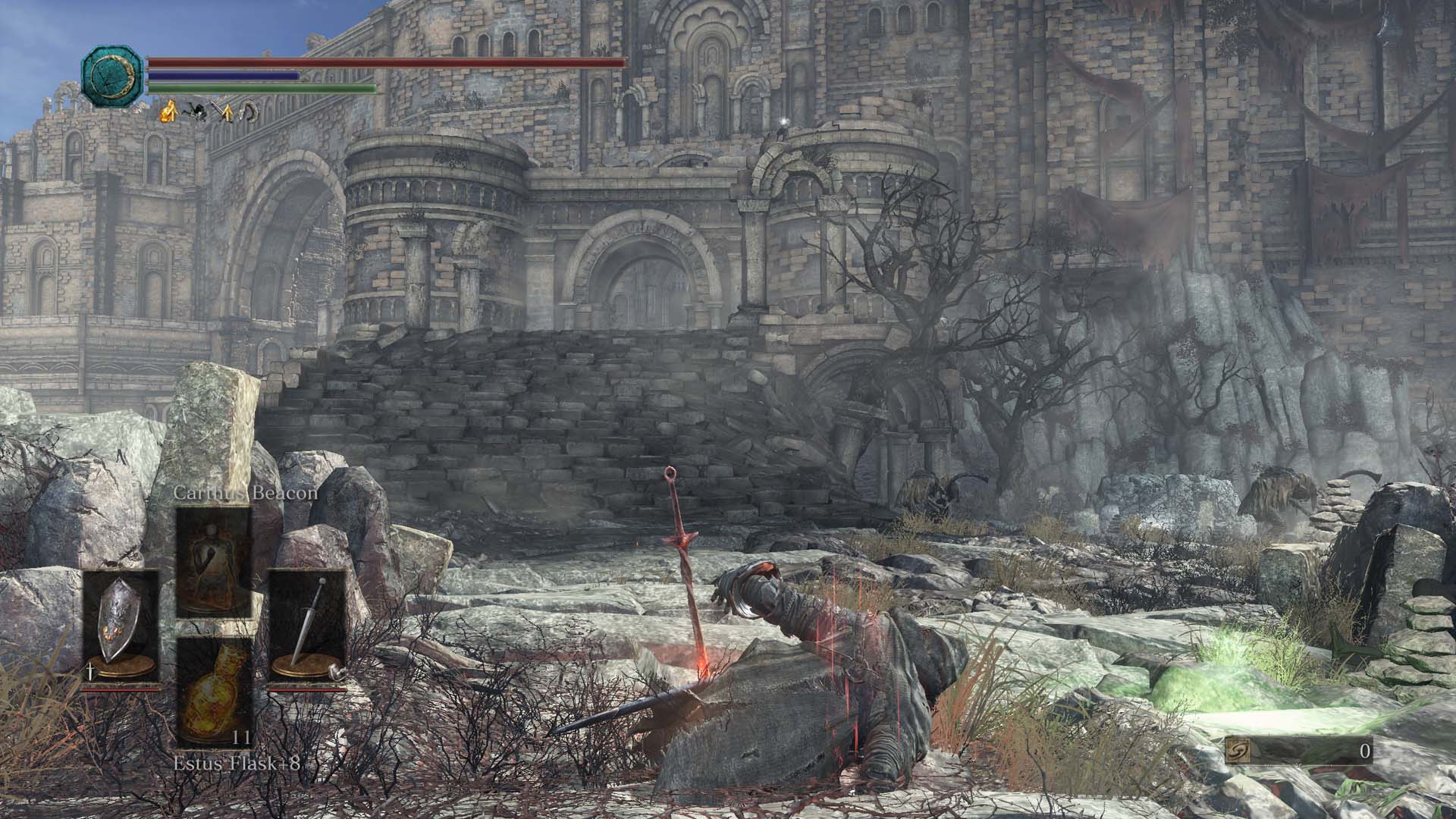 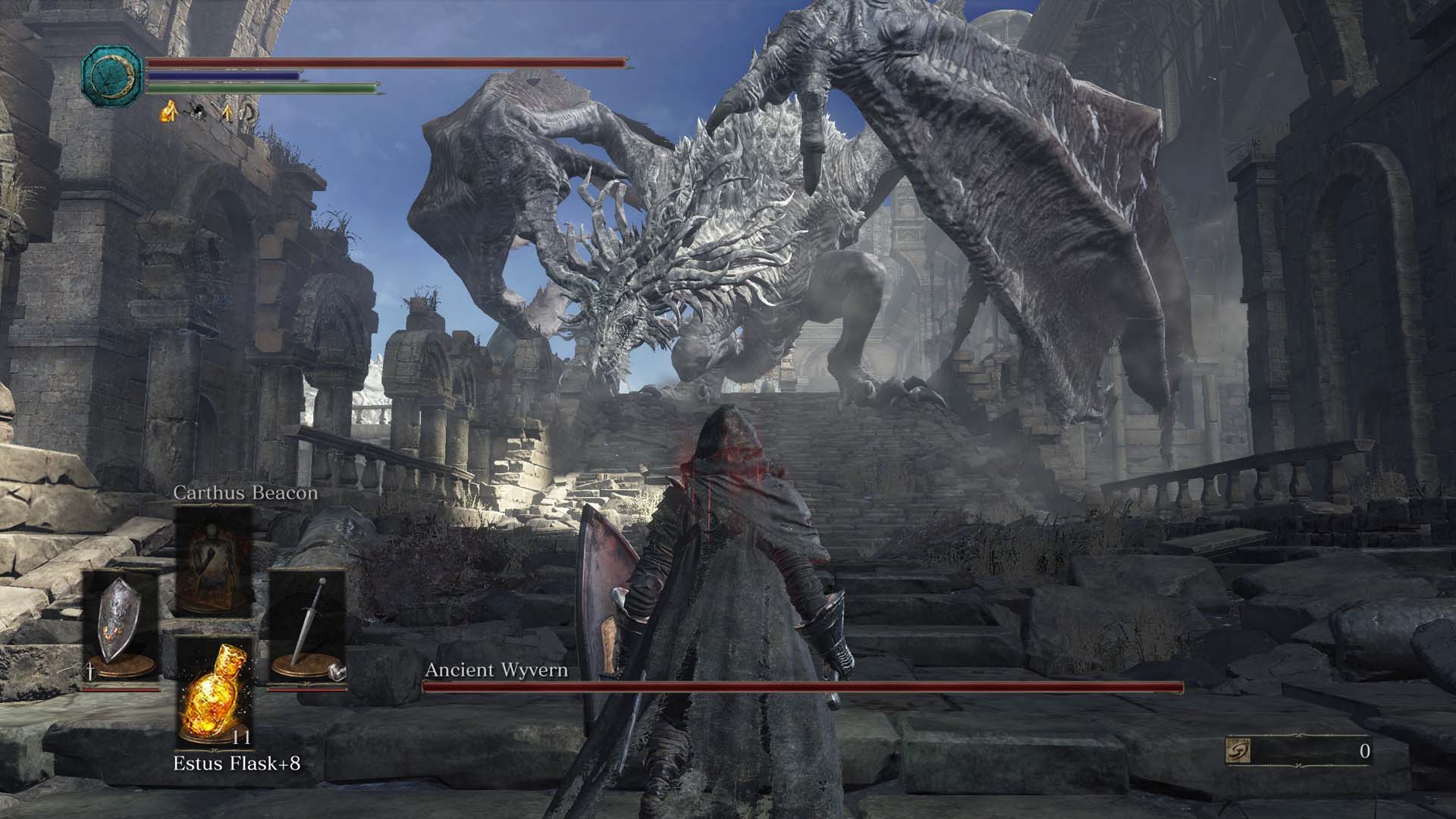 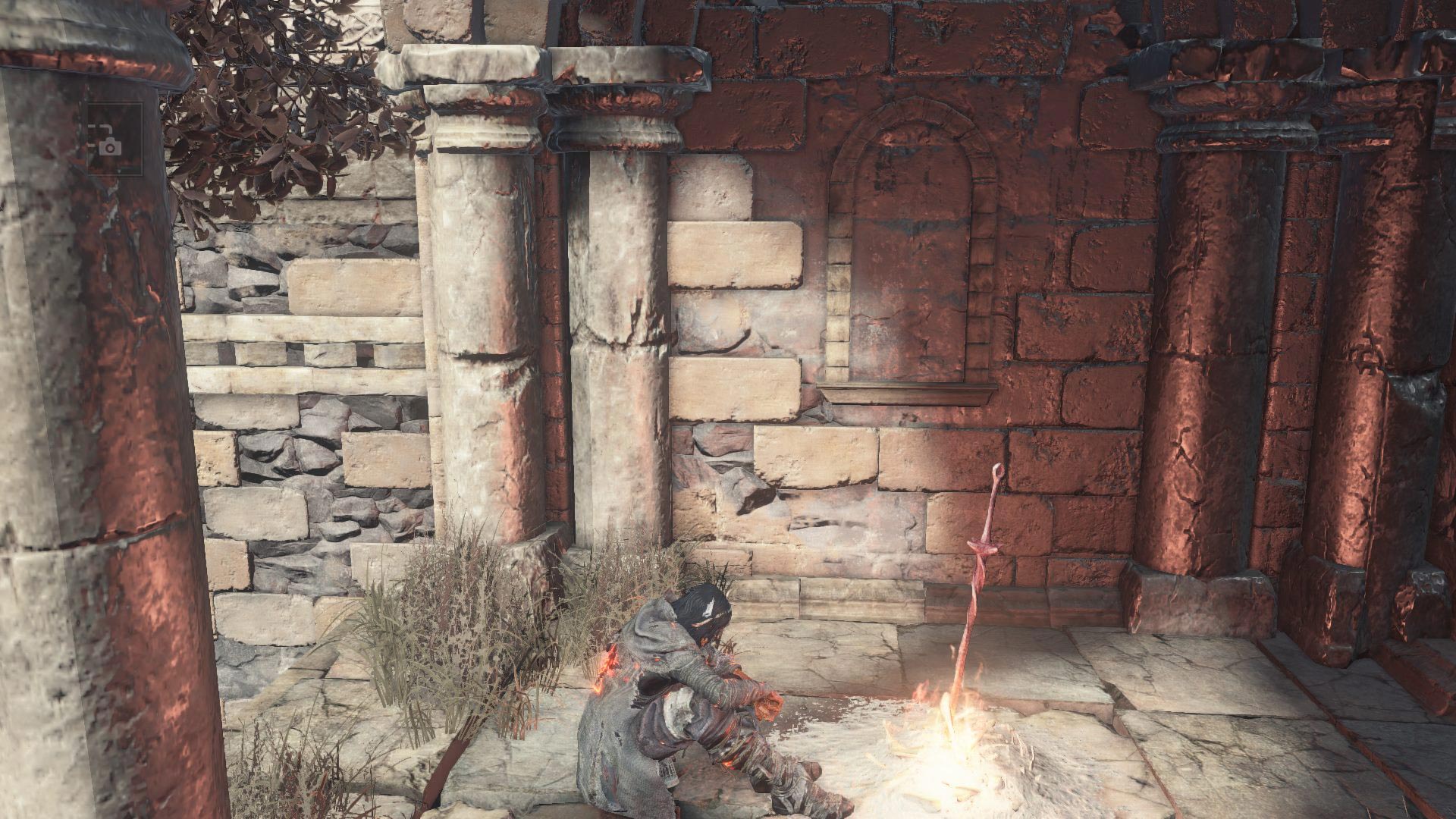 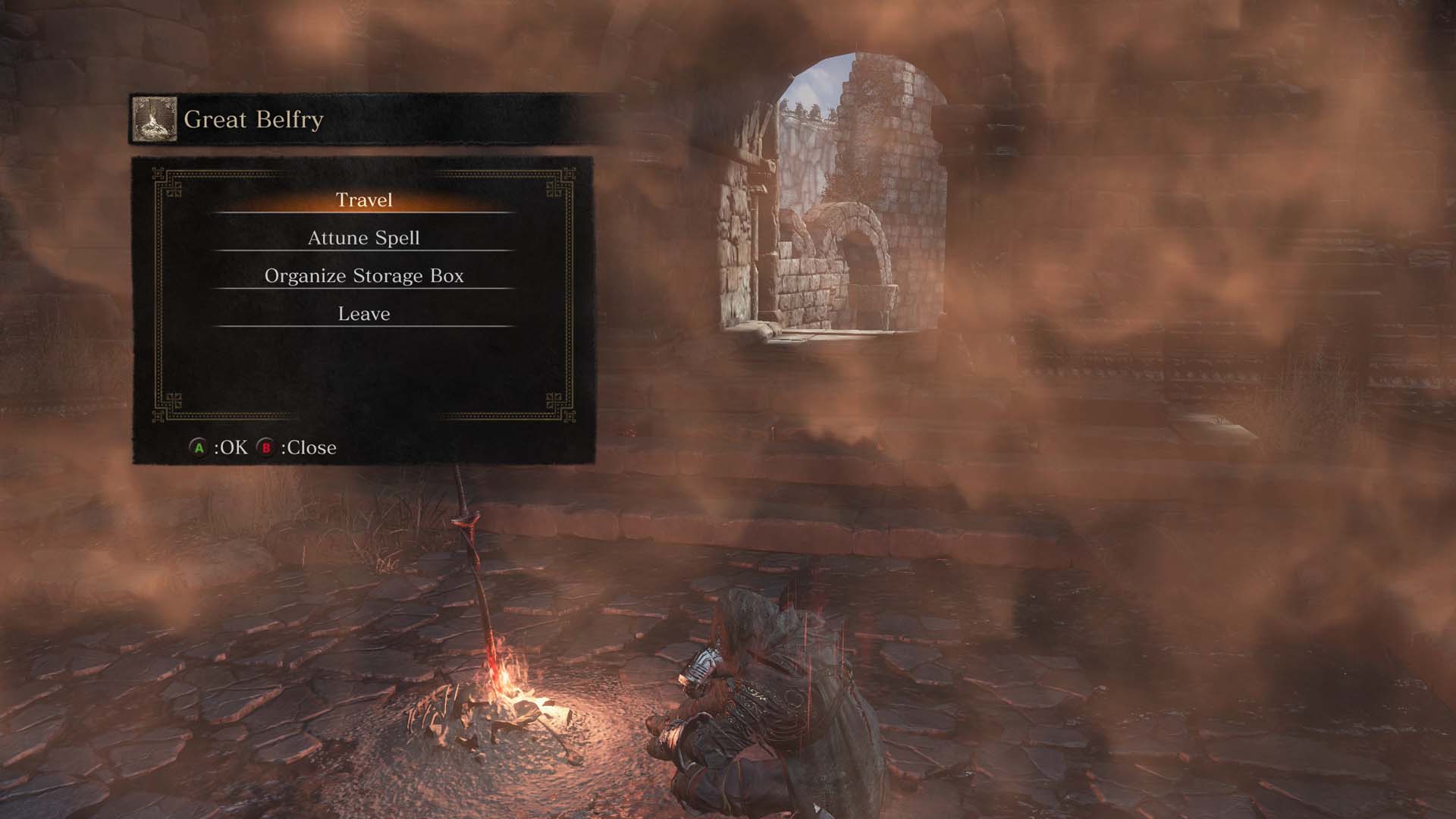 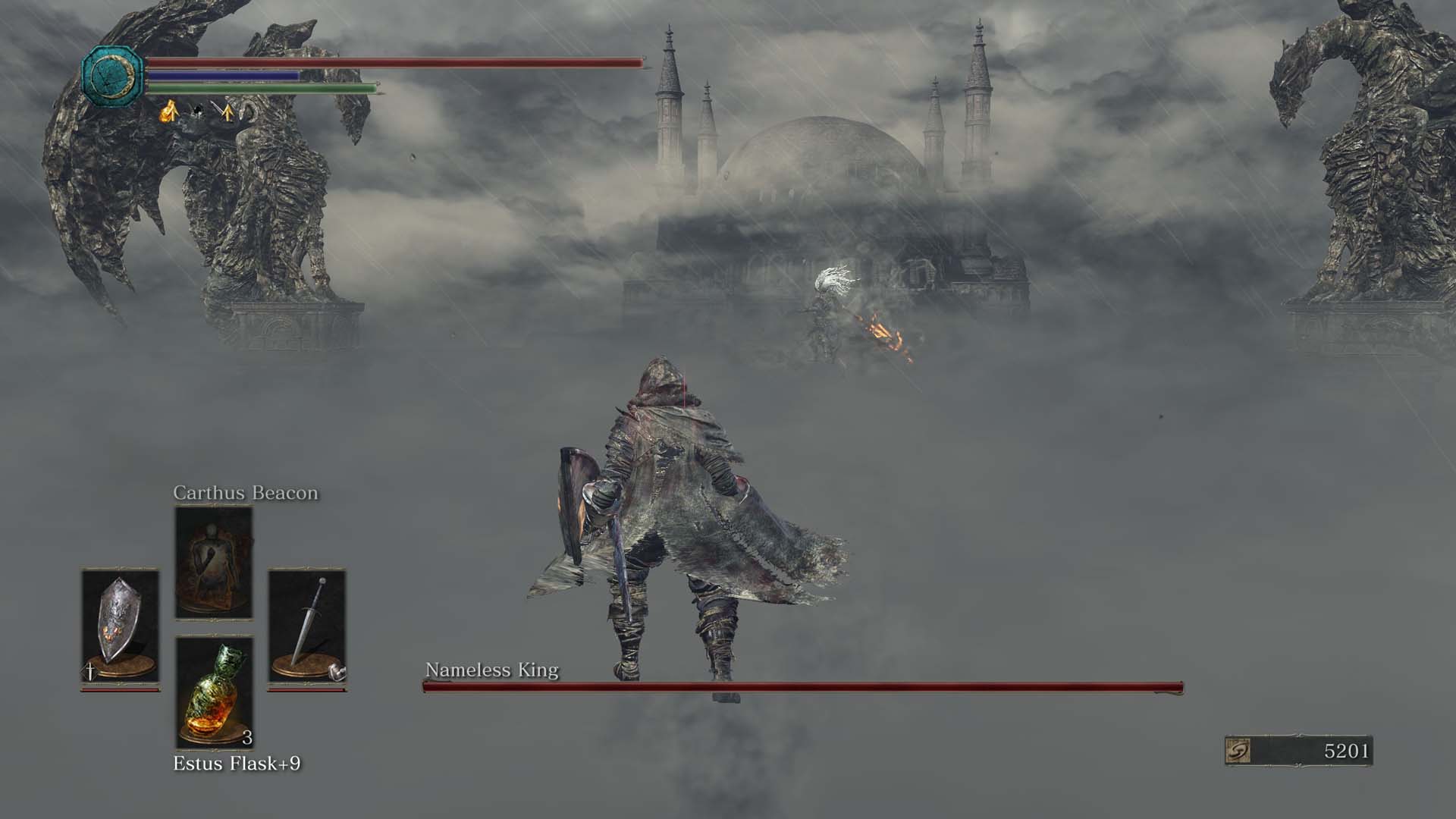 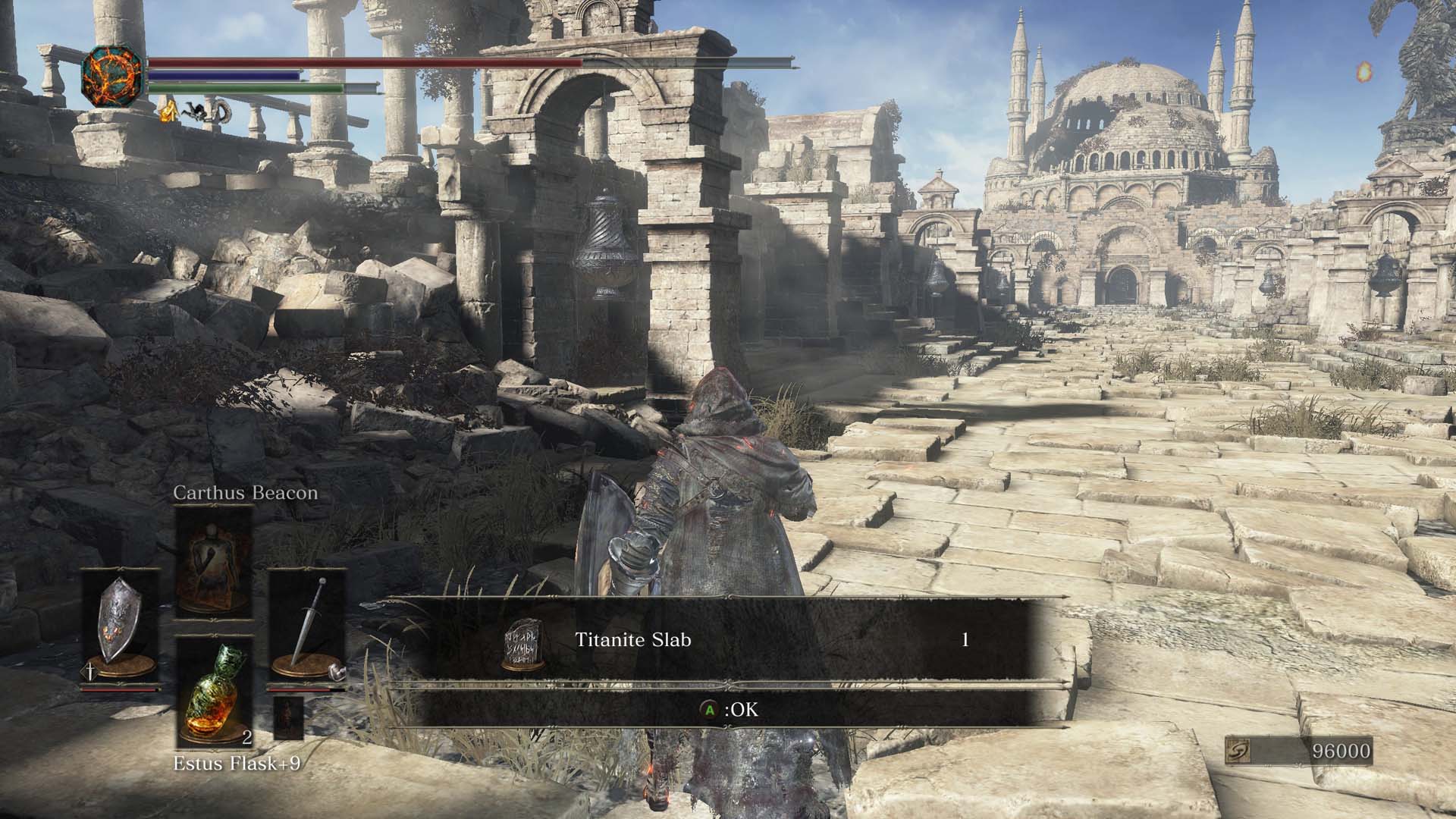 For those of you who have been there before, just head to the Irithyll Dungeon bonfire warp, go straight out the door, hang left across the gap, then hang another left, proceeding down the stairs and to the right. That elevator will lead you to Archdragon Peak, but you'll need to do a bit of legwork first in Consumed King's Garden.

Once you've acquired the item past the Oceiros the Consumed King boss fight in the Consumed King's Garden, press the button to switch any of your gestures to the Path of the Dragon. Sit down next to the stone dragon at the base of the elevator on the other patch of carpet. Use the emote. A cutscene will play, and you'll enter a new zone.

The path is very linear from here. Walk straight to pick up a Soul of a Weary Warrior, then up the hill to the right for a Lightning Gem. Turn around and veer right for two Homeward Bones, then go up the next hill and turn left to find a nice bonfire.

It's a straight shot from here to the boss, but if you like, you can take a slight detour for a Titanite Chunk. Otherwise, go into the castle and into the fog door to trigger a relatively easy boss fight.

Short version: Chip at him with ranged attacks or use the gimmick.

Tactics: Like Yhorm the Giant what seems like a daunting affair is primarily a gimmick-based boss. If you're so inclined, the Wyvern is weak to lightning, is prone to arrow fire, and can be chipped at by a melee weapon at his feet — but you will do so little chip damage that the encounter will take a long while to best.

Instead, immediately run forward after entering the room and veer left — you should have time to get there while he's making his grand dramatic entrance. Ignore all of the bandaged enemies as they're just fodder, and keep making your way upwards in the closest tower. Look straight ahead at the ladder on the far side of the fortifications with two bandage foes at it — that's your destination.

Climb the ladder, then veer left right above the Wyvern's head. Equip a melee weapon and use a plunge attack (mashing the attack button or holding it works, just make sure you give the game half a second after falling to recognize it) — the dragon is dead! Just ensure that his head is lowered before you jump, ideally after one of its fire breath attacks.

After the fight you will be instantly transported to the next area, with a bonfire right in front of you.

Walk up the stairs to the left and grab the two Titanite Scales. From there you've reached the top floor — you can pick up the Dragonslayer Spear from behind the gate. Continue on down the stairs, and note that the hallway has no items in it, so there's no need to stop. Cross the bridge and go directly into the room in front of you — a Titanite Scale and a Crystal Lizard await you.

Turn around from the non-mimic chest, go outside and hang left, going up the stairs and picking up a Soul of a Weary Warrior along the way. You'll really want to book it on this route as a dragon will plop down next to you, and you don't need to deal with him yet.

The next room features an NPC that grants you Ricard's Rapier when killed, and a ranged caster. Run up the stairs and kill the latter before taking on the former. Both have a very low health pool so don't be intimidated. Ignore the lever on the left and head straight to find the Great Belfry bonfire.

The next outdoor area features multiple bandaged fiends, so bait them one by one into your clutches rather than fight them all at once. A Large Soul of a Crestfallen Knight awaits you in the middle. Three Twinkling Titanites are located in a non-mimic chest in the tower. Walk up the ladder to face against an NPC, which grants you a Dragon Tooth and Havel's Greatshield as a reward, as well as a Titanite Slab on the ground.

Return down the ladder and proceed all the way up the mountain — notice the dragon statue? Perform the Path of the Dragon emote again in front of the altar to snag a Twinkling Dragon Torso Stone. The big bandaged enemies with axes can be daunting, but they do have a major weakness. Simply wait until they breathe fire, then run in and sneak in four to five attacks. They are also prone to staggering.

Go back to the previous bonfire, pull the lever, then walk across the clouds to initiate another boss fight.

The Split Tree Crest Shield is a great choice for blocking lightning damage. You can find it inside of a treasure chest in a room beyond the Dragon Barracks bonfire in Lothric Castle. 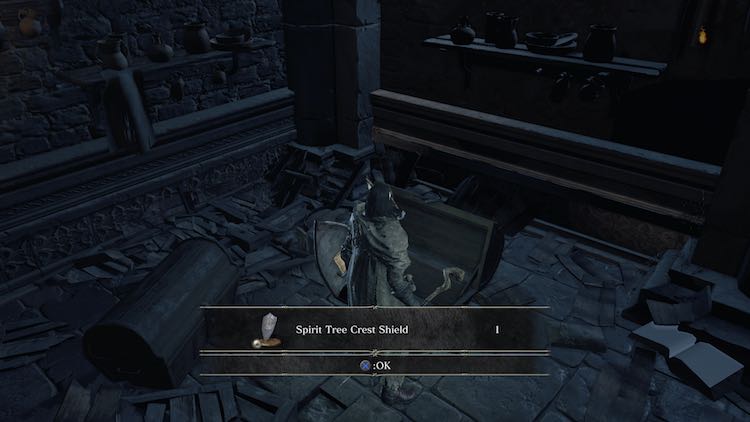 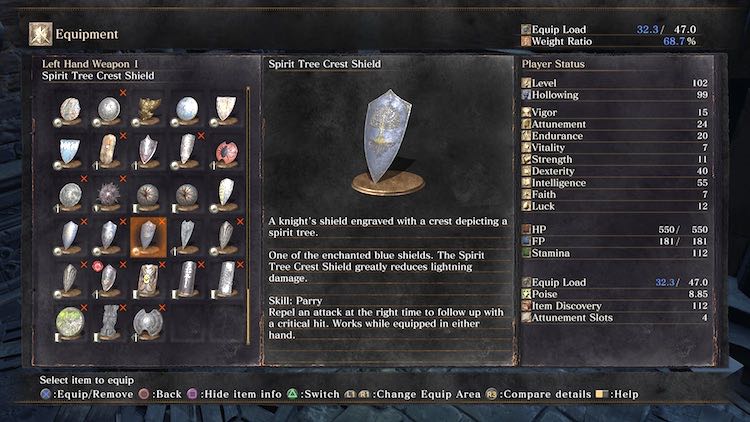 Slash the dragon's head, waiting patiently for an opening.

To be clear, this battle features two phases that are quite different from most of the others in that they are entirely separated from one another, complete with a cutscene. Failure to complete both rounds will result in a complete do over. Phase one deals with the dragon.

Perception is a massive issue in this fight, mostly because the ground and the arena is obscured, but you have to be on your toes the entire time. At the very start run immediately towards the boss, forcing it to re-adjust rather than launch an initial strike. From there, the boss will use a wide variety of abilities to inflict a massive amount of damage, and only a few them leave the dragon open.

The most common attack is two forms of fire breath. The first is done while the dragon is on the ground, and is its most vulnerable state. Watch for its head to rear back and for the flaring nostrils, then run in against the next and start slashing — with some luck, you may even stagger the beast, opening it up to a special attack. He also uses a very similar attack that will result in a lightning spear strike — it looks very similar in that the dragon rears its head in the same way, but there will be a flash of lighting instead. Dodge the spear right before the strike and attack the head after. Once the fire is done, get your shield up and get ready to roll. When the dragon flies up in the air he's going to hail down a firestorm that can stunlock you to death. Having fire resistant gear for the first phase is advised, as is running away (dodging will have mixed results). You can also generally avoid this by sticking close to the boss.

Occasionally the Nameless King will poke at you with his spear. Lightning resist can help here, especially in phase two, but it's not required as most shields can block his strikes. It's the dragon you need to worry about, specifically the fire blasts. Try to stay in front of the boss, just under the head, as any other part of the body will take significantly less damage. Using the lock-on feature is not recommended as it may focus on the King, but if you keep a good lock on the dragon's head this shouldn't be a major issue — though when he does take flight in a lateral manner, locking onto the King can help you keep track of when exactly he's going to throw his spear at you. With or without locking on, make sure you keep an eye on both the dragon and the King throughout the fight. After depleting the dragon's lifebar, it's on to the King himself.

The Nameless King will hop off and fight you directly. Given that you're probably winded from phase one, he's going to be one of the toughest encounters in the game. If needed, pop an Ember item to regain your full health bar and heal from phase one.

It is possible to outrange the King, and as a general rule, his ranged attacks follow straight line patterns, making them very easy to dodge (and you can also block them). If you're going up close, a lightning-resistant shield with a 100 percent damage resistance rating will work wonders for blocking most of his attacks.

He's a fast opponent, zipping around to and fro at will, so be prepared for constant dodging. One specific roll that comes in handy is a forward dodge into his spear when he prepares to lunge at you. This should place you directly at his side for multiple strikes. Keep in mind that doing enough damage rapidly can result in staggering him for a special stab-attack from the front. When he reaches half health and starts doing his lightning slam move, be prepared for the aftershock effect several seconds later. Repeat the above strategy until he goes down.

After the boss fight a cutscene will occur, placing you in front of a bonfire and a long hallway that filters back into the main Dragon-Kin Mausoleum area. You'll find a Dragonslayer Set, as well as a Titanite Slab in front of the post-boss bonfire. That's all she wrote for Archdragon Peak!