This June,Tokyo Mirage Sessions #FE hits Wii U and Kirby Planet Robobot arrives on Nintendo 3DS. We went hands-on with both at PAX East 2016, and found two games perfect for Nintendo systems and fans.

Announced in 2013 as Genei Ibun Roku #FE, developer Atlus' Tokyo Mirage Sessions ♯FE (pronounced "sharp FE," in case you're wondering) has always been a mashup of two popular Japanese role-playing game series: Fire Emblem and Shin Megami Tensei. It wraps those two franchises in a story that frames its heroes as Japanese pop stars, a decision that has a profound effect on the game's aesthetic.

Tokyo Mirage Sessions ♯FE takes place in modern-day Tokyo, where an evil force has crossed dimensions to invade. Your characters -- a few at first and then many later -- will fight back against the Mirages with magic and J-pop style.

The sections that we played focused on combat. Before we could fight , we walked around a small section of Tokyo until we found a portal to the Idolasphere, a parallel dimension full of evil. We walked to to a glowing fissure in a building and into what amounts to an RPG-style dungeon.

Every dungeon has a theme, like the theme of fashion photography and paparazzi that we entered first. Its path was mostly linear, though the flashy art style surrounding it belied the dungeon moniker. We had to avoid getting our pictures snapped by enormous robots scattered through the level. When we saw an enemy, it was time for combat. We could swing our weapon in real-time to begin the battle with the privilege of place and gain the first attack.

The turn-based battles will be familiar to veterans of either series, and the menus have the distinctive styling of a Shin Megami Tensei game like Persona 4 Golden.

In combat, the crossover becomes undeniable. Like in Shin Megami Tensei games, our main characters could summon heroes to fight. All of those heroes come from the Fire Emblem series. The first that we summoned was Chrom, one of the Fire Emblem franchise's main protagonists.

Combat draws on the two series, too, and we used the skill attacks from the Shin Megami Tense series to win several battles. No matter where or who we fought, the game never lost touch with the underlying J-pop theme. Battles take place in arenas ringed by spectators. Before executing powerful moves, our characters signed their autographs in mid-air.

This is the stuff of Tokyo Mirage Sessions ♯FE , a game made of fan service, for Nintendo fans and Japanophiles alike. It hits Wii U June 24 with Japanese voice acting and English subtitles.

Kirby's next adventure brings him to the 3DS wrapped in a mech suit. 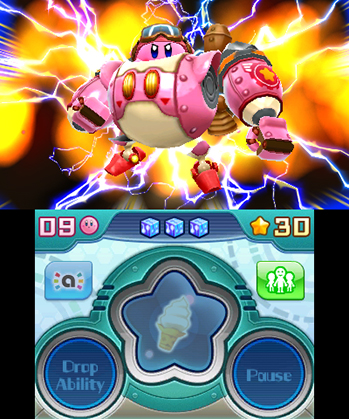 The puffball's core abilities remain intact, and as usual Kirby will be able to inhale his enemies and copy their abilities. It was cute, pink business as usual during our first few minutes on the 3DS.

Planet Robobot departs from other Kirby games with an ability outside of its main character. When inside the mech suit, Kirby smashed through obstacles and punched enemies into oblivion. Though we didn't get a chance to see this, Kirby's mech suits can also behave like he can, morphing to embrace enemy characteristics.

Alongside Kirby: Planet Robobot, Nintendo will release new amiibo: Kirby, King Dedede, Meta Knight and Waddle Dee. With a tap on the screen, they imbue the game with their own unique powers.

No matter your form, developer HAL Laboratories has created a platformer that takes advantage of its hardware. The board we played emphasized Kirby's leaping transition between the background and foreground, and the glasses-free 3D effect only heightened our sense of place.