Share All sharing options for: Dead by Daylight is a horror movie where you're the victim (or the killer)

The masked killer walks through his forest looking like a bear with a machete.

He has four goals, and they are in constant motion.  So is he, stalking through the darkness at the behest of an unnamed, unknown malevolent entity. The killer hears a loud, mechanical crack, turns and sees the source of the sound. To the man with murder in his soul, the source looks like daylight. He runs toward a building in the distance.

In the building a hundred yards away, another man curses his clumsiness. He's dressed in slacks, a white button-down shirt and glasses with black plastic frames, and he's cowering behind a generator. Any other day, he might be a computer programmer. Tonight, he's bait.

He'd crept into the building and found the generator a minute ago. He pulled the ripcord. It's one of four that he has to start, one at a time. Do that, then the doors open and he can escape. Those are the rules, and he had a plan. He pulled the ripcord, and it grumbled to life. It was going slowly, but it was going, and that was enough. Then the damn thing backfired and popped and flashed and now the killer knows he's here. He might as well have sent up a flare. 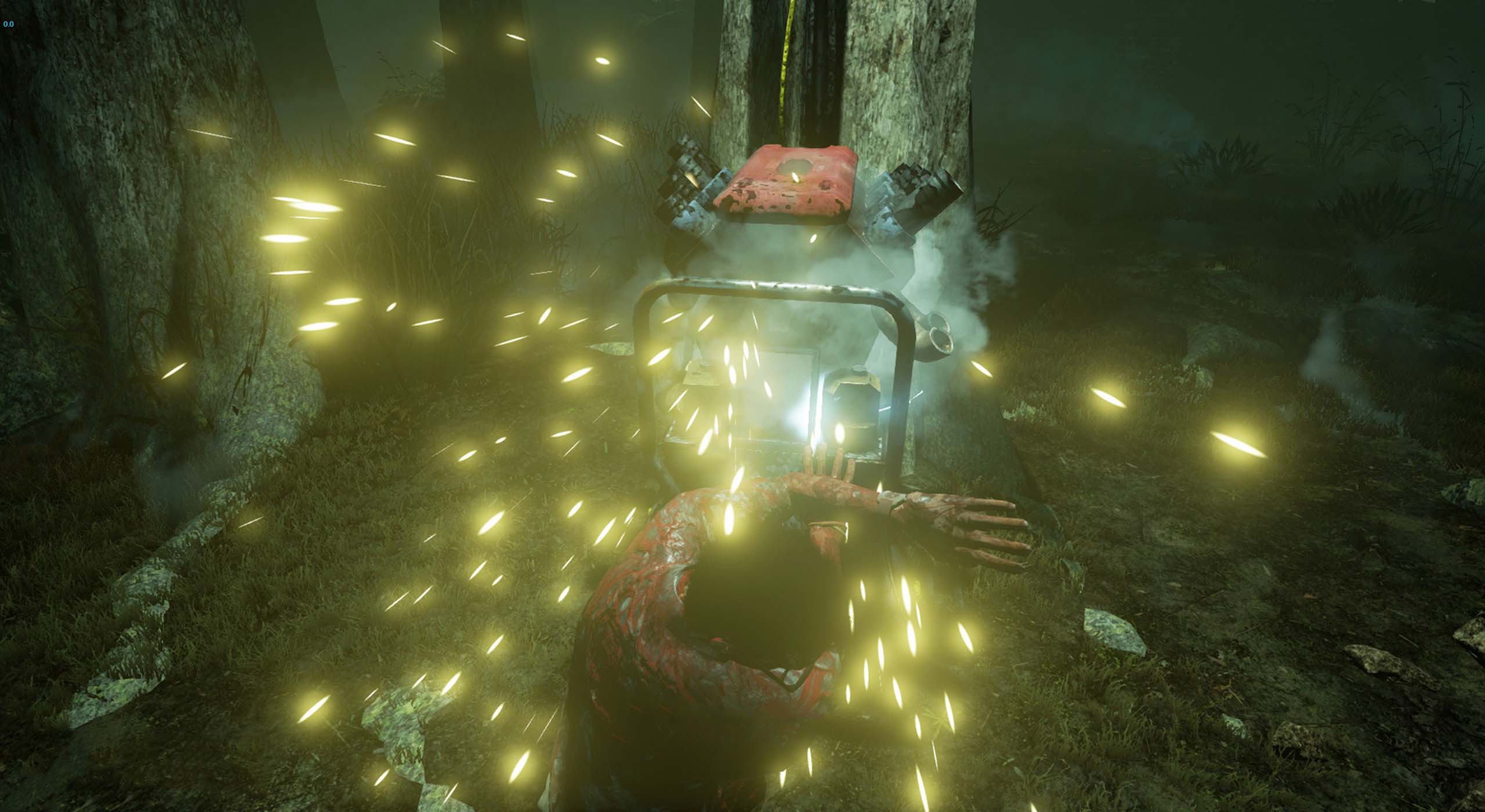 The man in black glasses has time to react to the noise and its implications, but he doesn't have time to think. That's when he makes the classic blunder, though he won't realize it for a few minutes.

He turns around and runs through the first door he sees. It leads to a basement, lit just enough to show the bloodstains that line the floor like carpeting and the walls like wallpaper. There's got to be a place to hide, he figures. He finds a flashlight in a far corner, but no hiding place. Flashlight in hand, he runs back upstairs, past the generator up the staircase to the second level.

In the rooms upstairs, hiding spots are laughably limited.

The killer enters the building, stomps around the first floor perimeter, sees nothing. Back by the front door, he turns his head to look into the darkness outside. "No," he thinks and heads upstairs.

His prey is in the first room he checks, cowering behind a box, as if that would hide him to anyone with sight. He approaches, machete at the ready.

A minute later, they exit the building together. The man in glasses, beaten, bloodied and helpless, is slung over the killer's left shoulder, struggling to be set free. It doesn't work.

The killer carries the man in black glasses to a contraption. It looks like a collection of meat hooks suspended from parts unknown. He takes the man off his shoulders, impales him and walks away. Out there in the darkness, there are three more potential victims.

The man in glasses struggles. He wears himself out trying to pull his body off of the hook. It does him no good.

Just as he's about to die, a woman shows up and begins to pull him off of the device. It works. He falls to the ground, conscious just enough to realize that he has a second chance thanks to this stranger.

The killer reappears and beats both bloody. He puts the man in glasses back on the contraption. A minute later, half a dozen more tendrils descend, and the machine closes in around him. The man in glasses stops struggling as the machine lifts him up through the treetops.

He waits this time and impales the woman next. She ascends, an offering to the unknown.

This is Dead by Daylight, and come June 14, you can be the hunter or the hunted.

What you read above is the story of my first experience with the multiplayer game. I was the guy in the glasses, stumbling upon a generator and failing to anticipate the quicktime events that happen when you're trying to restart a generator. My failures caught up to me and everyone else, and the killer won that round.

I haven't a clue who the other PAX East 2016 attendees were who tried to rescue and murder me. Odds are, you won't have a clue who will help or hurt you when the game arrives on Steam in a few months. I do know that we all operated under the same constraints. The killer, for example, has to play the game in first-person view, which gives a weird kind of visceral advantage but also limits the player's field of view. I know that the four hunted play from a third-person perspective, which lets them see more of the battlefield.

I know, because producer Mathieu Cote told me, that Dead by Daylight will have more than one killer, and they won't all seem so much like Friday the 13th's Jason Voorhees. Cote declined to get specific, but he was happy to talk about the advantages not being tied to a franchise gave the creators. There's nothing to prevent them, for example, from creating killers with supernatural abilities.

I know from experience that victims can't attack the monster. I know that players will earn perks and be able to bring items like medkits into the game.

I know that it's built to be so gory and horrific that Cote made sure that developers were OK working on this game. It looks quite good, but there's nothing pretty about it. I know that it didn't make me uncomfortable, but it made me wonder if I should have been more uncomfortable.

What I don't know is how many people will play a Windows PC-only multiplayer game like this, even at a budget price. If it does well, Cote told me, they'd love to bring it to consoles. Still, Dead by Daylight will have to prove itself on PC first.

What I also don't know is what would have happened if I'd have gone outside instead of up those damn stairs.