How to defeat enemies, master the controls and find secrets

Although Nintendo has a reputation for developing simple, easily digestible experiences, every so often it can throw a curveball our way. Enter Star Fox Zero, which not only has some really tough encounters but a brand new set of controls.

This guide will teach you how to adjust to the new GamePad-centric control scheme while maintaining the ace pilot skills you've had since the Super Nintendo.

If you're the type of person who immediately flocks to the options menu of a Nintendo 3DS or Wii U game to turn off gyroscope movement, you're going to have a tougher time acclimating to Star Fox Zero. But it's not impossible to adjust, especially if you follow these tips.

For the most part, the Arwing is going to be controlled in a traditional manner. Sure, the GamePad shows a cockpit view that can be great for precision aiming, but the tried and true third-person controls work like a charm. Pressing ZL will start a tracking mode, which will show where a key enemy is located on the TV, and focus in more on playing on the GamePad. This is actually a great way to locate bosses (especially the smaller Star Wolf squadron) if you throttle it quickly, then immediately move back to the traditional TV view. Even if you loathe the idea of the GamePad, tapping ZL occasionally is a great tactic to remember. 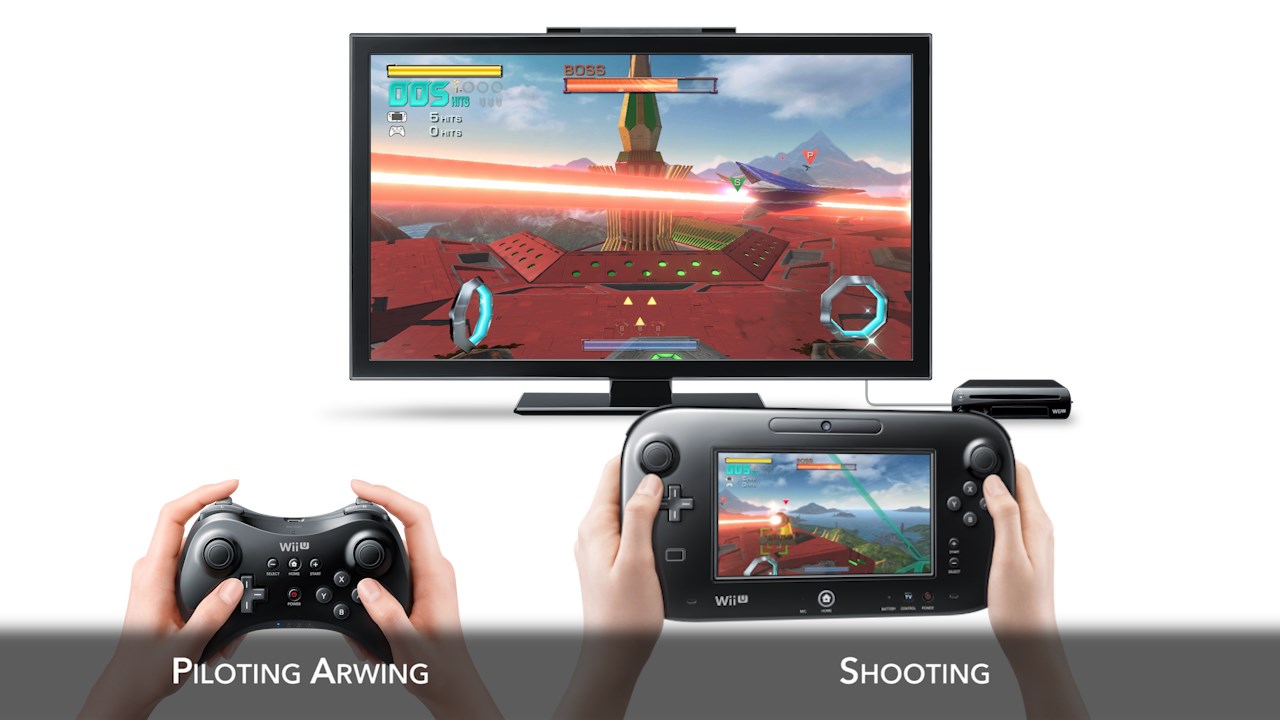 There's another useful GamePad function to keep in mind: Clicking the right stick will deploy a smart bomb, which is far more useful than juggling with the R button. Once you start acquiring other vehicles, it gets even trickier.

If you see a gold ring, always go for it — even if you're at full health. After acquiring three of them, and you'll net a continue, which is extremely useful for some of the harder stages — especially the late game boss fights. Note that in Star Fox Zero, dying without continues in any phase (yes, even the last boss where the initial areas are very lengthy) will force you back to the start. 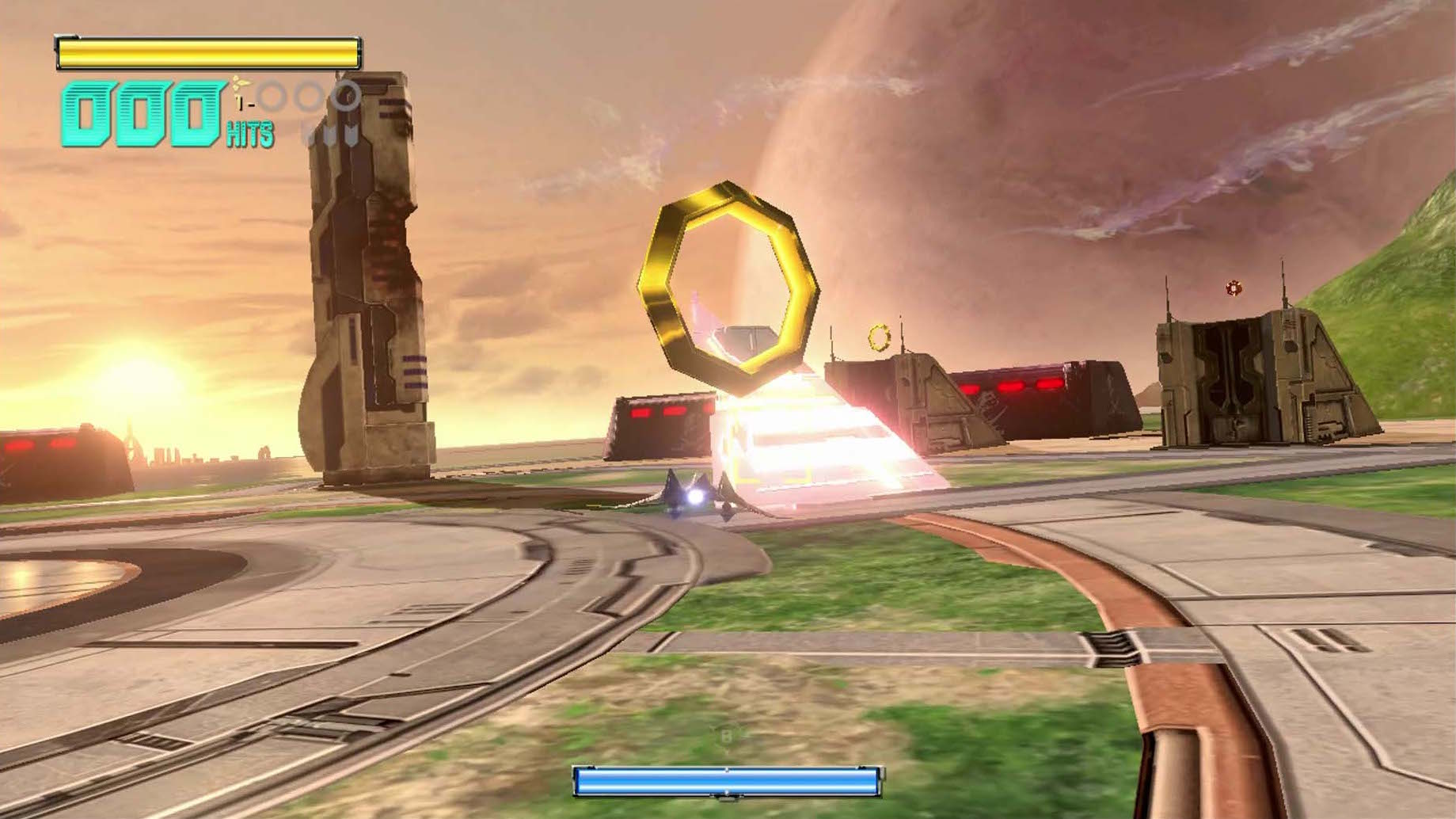 So, if you're far along and your health is in the red, search conspicuous areas and kill enemy fodder to look for rings of any kind. Gold is obviously best, as it results in a bigger health increase and can contribute to your continue count.

If you die before a checkpoint — even once — just restart the entire mission. There's no point in wasting a continue, because once you get to the boss, you'll have one less shot to beat it. If you fail, it's back to the beginning anyway. Build it into your muscle memory, or you're going to have a lot more failures.

Adapt to your vehicle 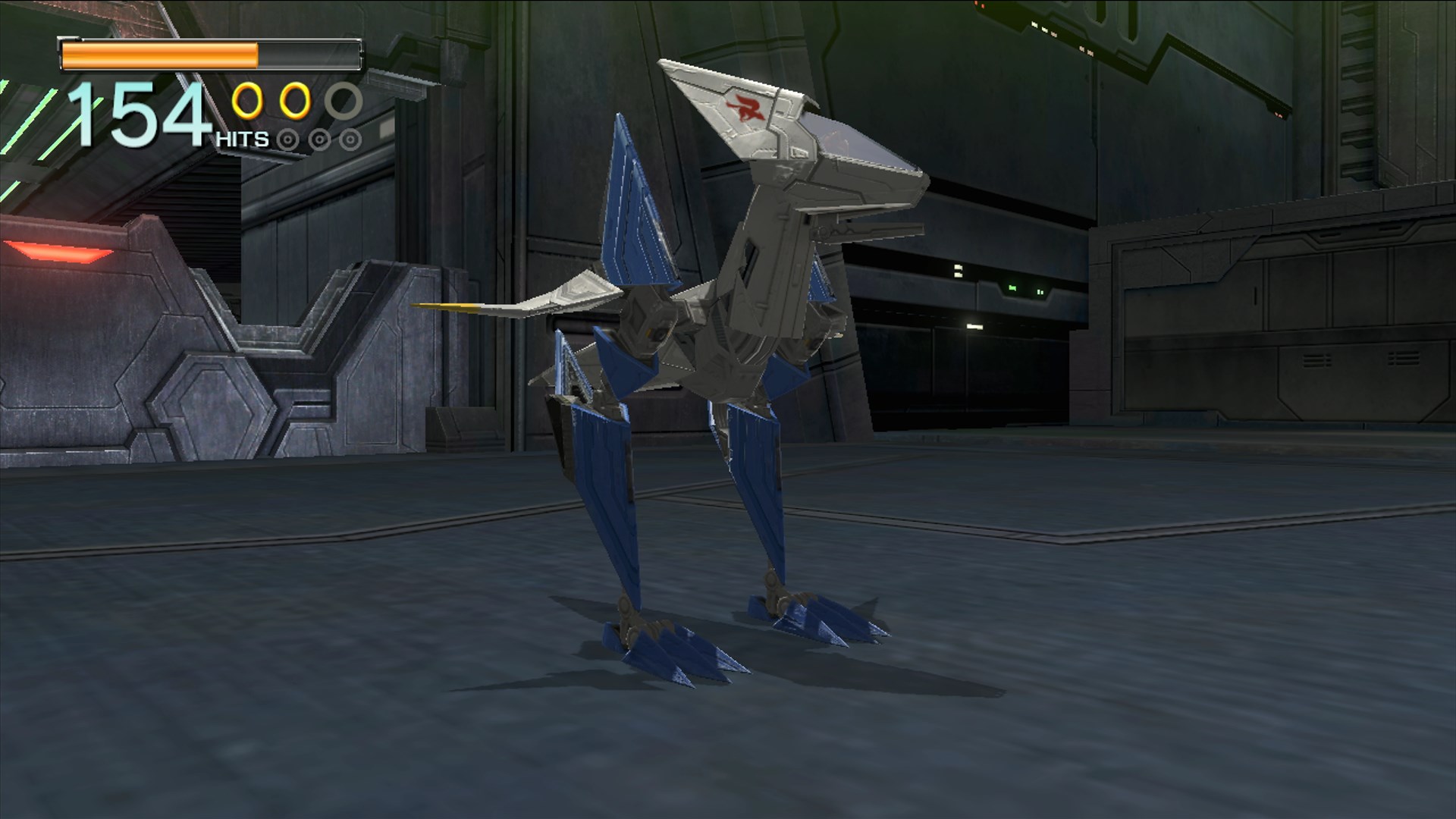 First up is the Walker, which you'll unlock in Sector Alpha. Initially you can only use it in certain areas, but eventually you'll unlock the power to transform into it at will with the A button. Do not underestimate this mechanic.

It's very easy to overlook its usefulness, especially since it essentially amounts to a tiny chicken mech, but it's incredibly powerful in "all range mode" arenas (read: boss fights) due to the sheer amount of control you have over it. Instead of the constantly moving Arwing, you can use the Walker to focus in on enemy weak points and other targets. Even if you're in space, look for a place to touch down and at least give it a try if you're having problems with a boss. 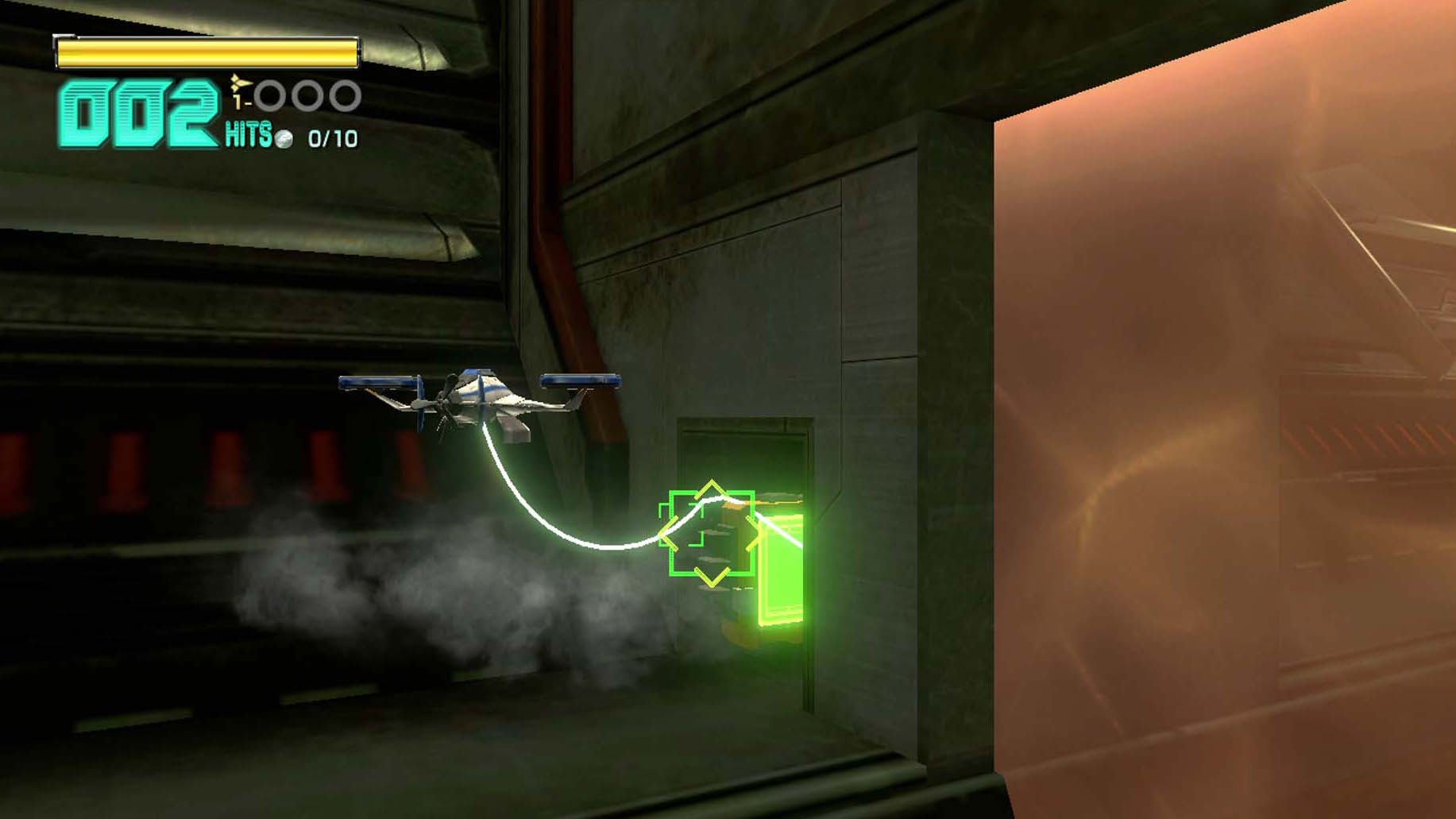 Hacking with the Gyrowing and Direct-i robot can also be a pain at first, especially if you don't understand where the dead zones where an ability does not work are. When hacking, make sure you bump up all the way against a node before you tap the screen. It's weird, but moving slightly to the left or right of it or even in front of the node without actually touching it can lead to an event where your hacking bot gets dragged away from the area or your vehicle is attacked. Fill your entire GamePad screen with the node and then touch it on the GamePad firmly. 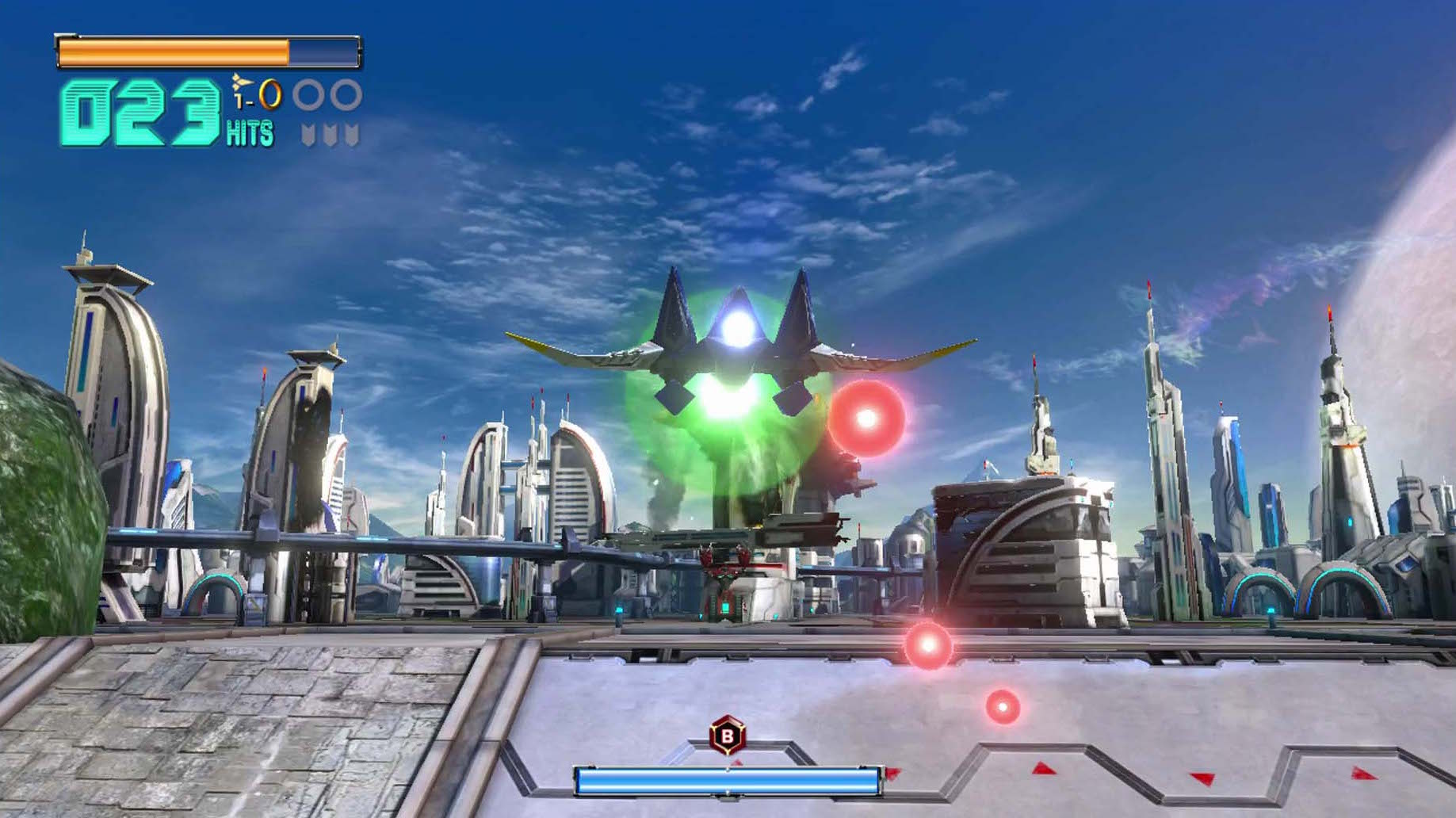 Remember that charged shots and standard blasters are situational. The general rule is,"If it's bigger, go with the charged shot." Practice this concept in the first stage of Corneria. Take a look at the big red robots that throw pillars. You can destroy those with one charge shot.

Alternatively, you should take down the smaller wingmen that flit through the air with a standard laser.

Using these two philosophies in tandem will increase your efficiency and cut down on useless shots that don't result in confirmed kills. Get used to throttling the attack button to switch between focus fire and charged shots on a dime. Bosses throw a wrench in this rule at some points, which are addressed in a below section.

Soon enough, you'll up your end of level score and even trigger some extra health or weapon power-ups for taking out specific enemies.

How to find secret paths and unlockables

Just like past Star Fox games, you can enter new levels through hidden paths. 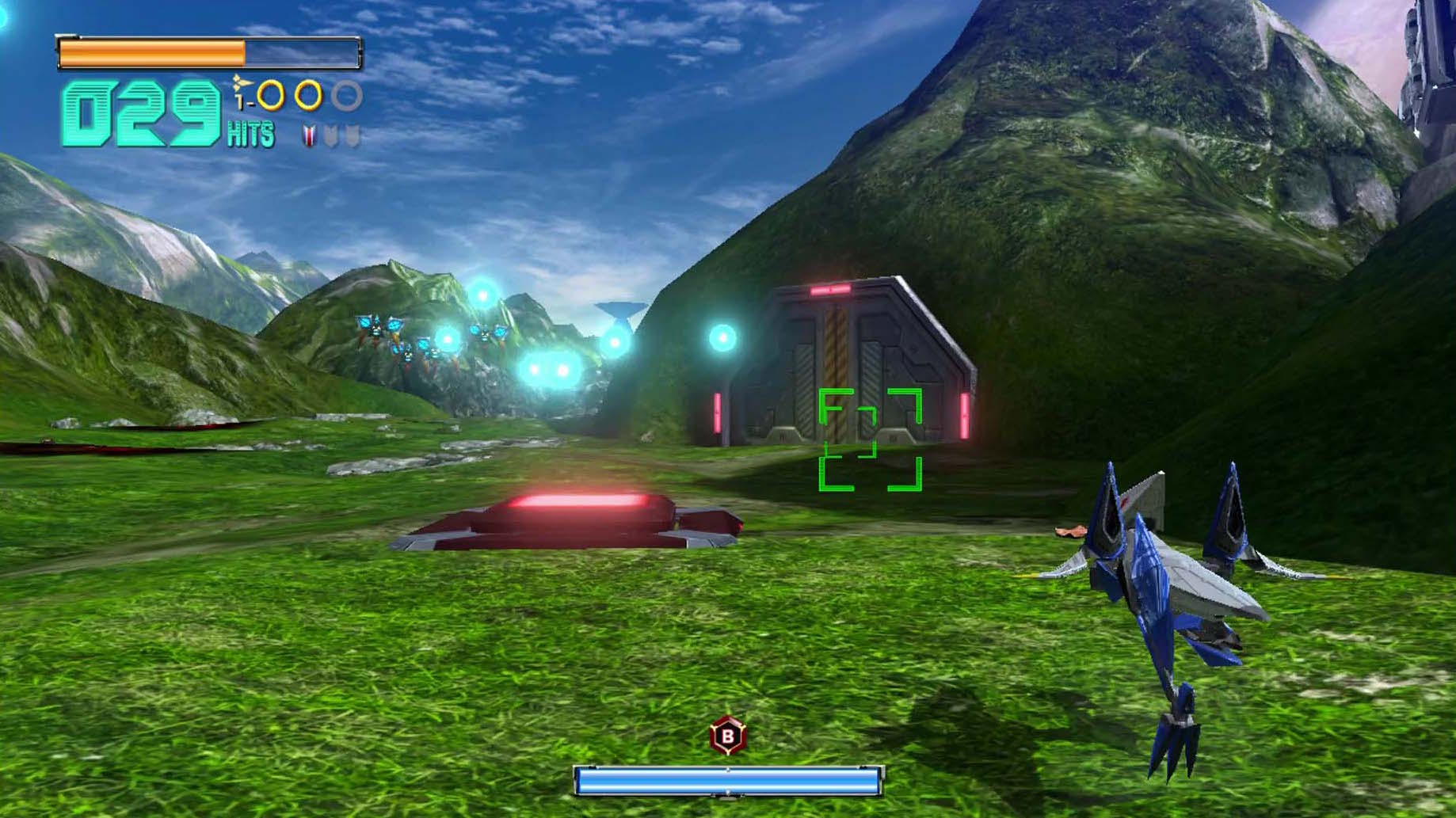 You'll find the first one in the initial stage, Corneria, though you'll need to return after you've acquired the Walker transformation upgrade in Sector Beta. Once you've done that, look for the red button on the ground after the tunnel area directly following the waterfall ravine run, step on it, and head through the giant doors to the right.

In Sector Beta, the branching path will fork depending on how quickly you defeat Star Wolf. Most first-timers will take the easier route of Titania, but Fortuna awaits if you can take him down faster.

After completing Titania once, you can return to take a portal near the end of the stage (it's in the canyon area where Slippy says, "Oh, what a relief!" Trigger flight mode for your Landmaster and move towards it to start a cutscene.

Using the Fox McCloud amiibo will unlock a retro Super Nintendo Arwing costume, but using it in Corneria will trigger a new set of sound effects. After you earn 70 medals, you can use both the Fox and Falco amiibo unlocks without actually owning the figures.

Tough boss getting you down? Here's some help 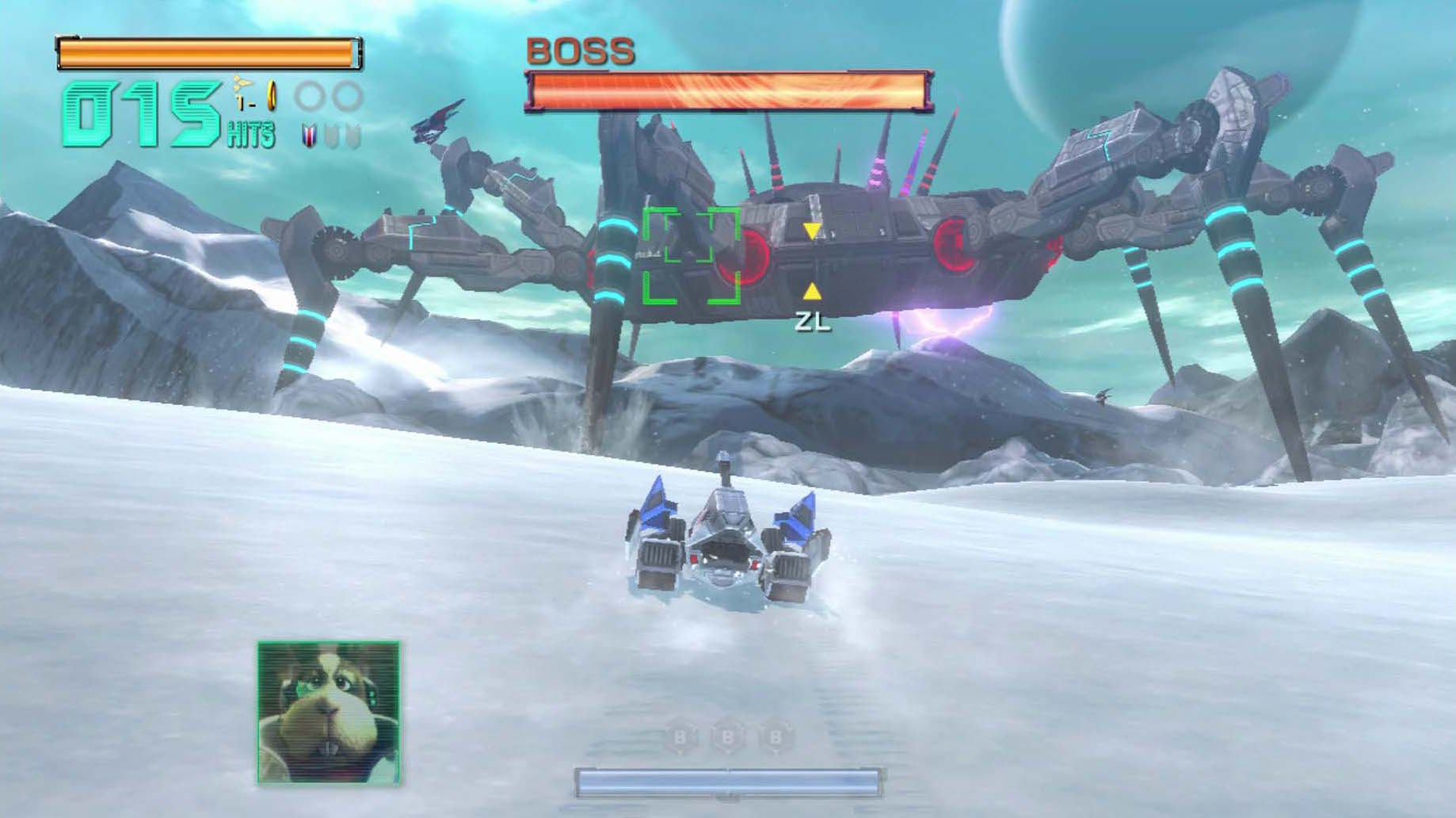 This fight can be a pain because it's probably the least obvious in the game. Sure, Mother Strider has pulsing red weak points, but after destroying a number of them, it's not very clear how you're actually supposed to take it down.

It took us a few tries to realize this, but Mother Strider's legs actually correspond to the nodes above on it brain. You need to adjust your route or fly around to another part of its circular body to take down a specific leg that's attached to that core brain node.

After you've taken down several nodes, play it safe. Go in and destroy them one by one, then U-turn right away after it's hit and boost to avoid its body slam attack.

Using the Landmaster to tag the legs and the Arwing to attack the brain (and subsequently escape) is the best way to approach. If you're consistently getting hit by the rolling flame logs, ignore the rest of the enemies on the battlefield, and stick to the sky for the entire battle. 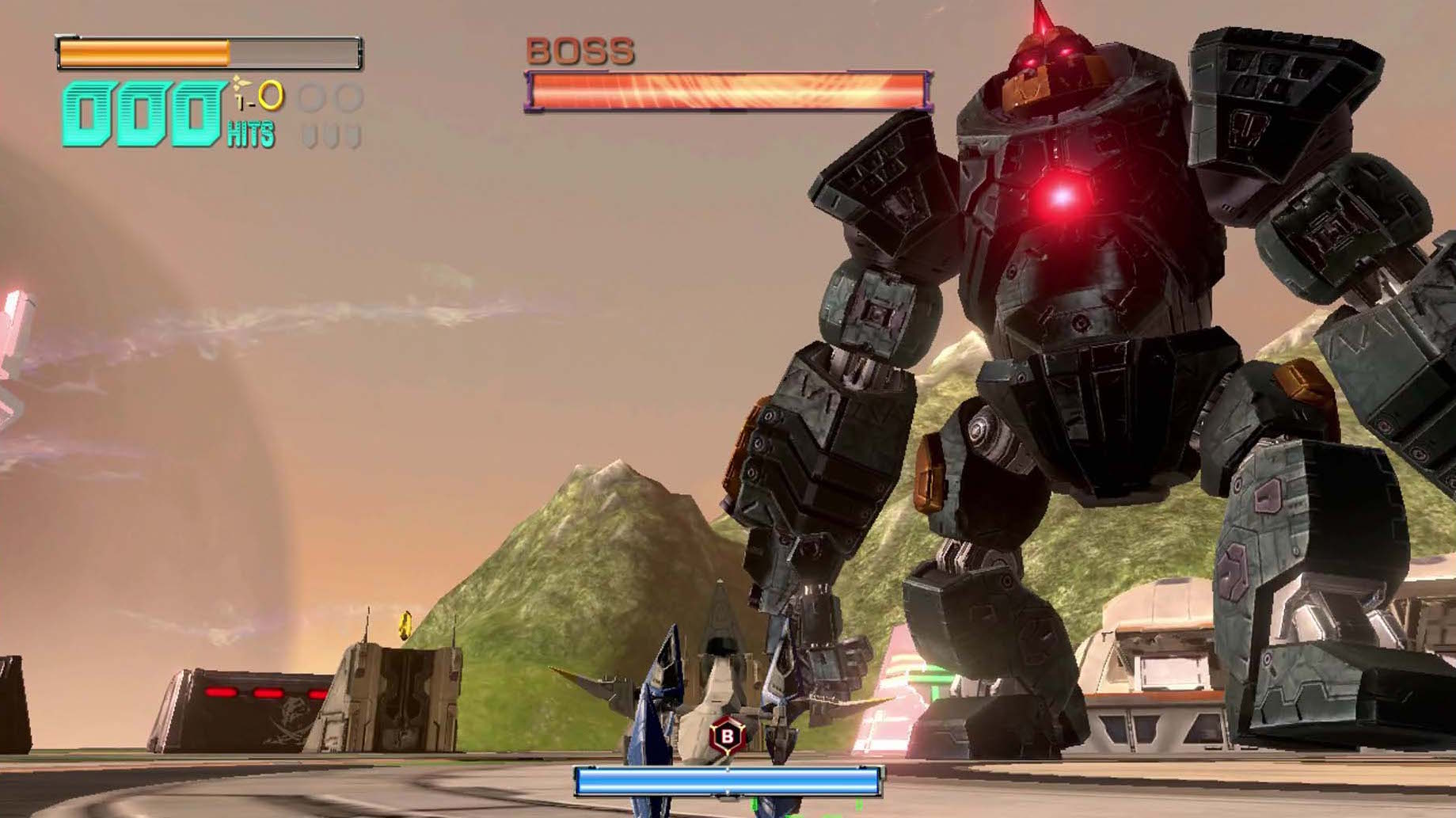 This is yet another boss that has telegraphs its weak points. It's very easy to overthink this fight, mostly because the front of Gigarella's body seems so obvious. Even though its hands seem like the right target — they're not. Start the battle by taking down Gigarella's chest gem, then transform into the Walker immediately.

Run under Gigarella's legs, make a U-turn, then blast the X on its behind. You can keep blasting this target until he's down for good.

As soon as the Gigarella even remotely telegraphs movement, boost under his legs, rinse and repeat. Don't even use the Arwing once for this fight outside of collecting health rings if you need them. It's an easy mistake to make and will only prolong the encounter. As we wrote above, making frequent use of the Walker can make or break some boss fights. 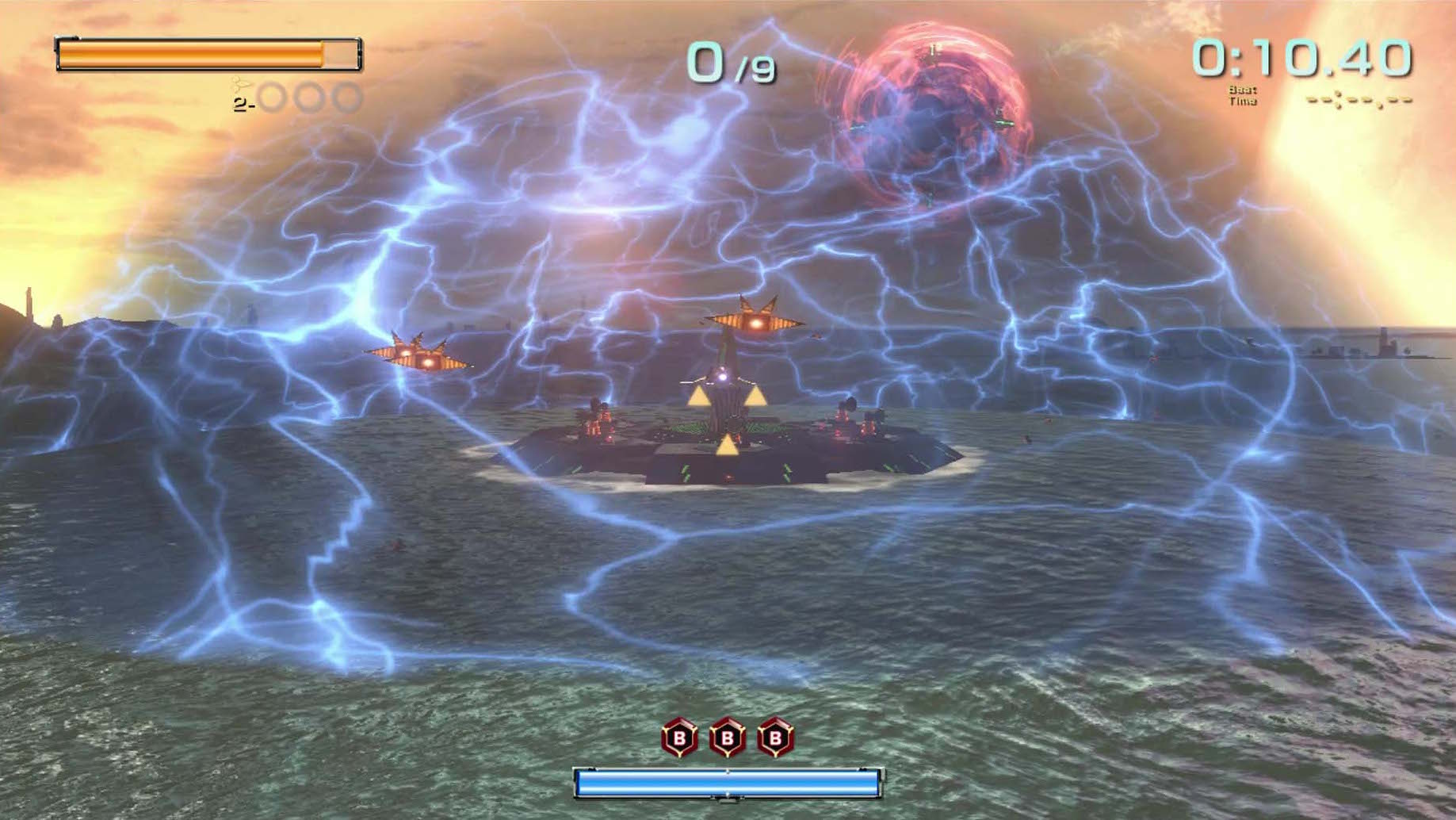 Taking the form of a gigantic sea base, this another tough battle. Here, the main gimmick involves a pulsing defensive electricity dome that periodically pushes out from its core. Avoid the temptation to take down multiple nodes, and use caution here. Target nodes that are close together, destroy two at maximum, then use the U-turn ability and boost immediately away.

It's really easy to get caught in the blast, so try to pay more attention to the TV than the GamePad, so you can see The Floating Fortress telegraph its pulse. If you see it flash at all, stop what you're doing and U-turn immediately. Getting hit by the pulse even once can fatigue you for the rest of the fight, so save your boost for escapes.

Andross can really wear you down, despite all of the life rings littered about the arena. The key strategy to taking Andross down is to phase push. Get him to transition to a new part of the fight as fast as you can, or you'll have so little health that you won't be able to take his later attacks.

First, look at the GamePad, and you'll notice that certain parts of the cylinder that Andross is housed in are colored differently. Fly into one of those areas and transform into the Walker.

Although the weak points on his hands are obvious, how you approach him can drastically alter the course of the battle. In short, do not play it safe. Go all out on his mitts. The clap attack is a godsend, as you can sit there and blast away at one of his hands until he's stunned and relents.

When Andross uses his overhand, one-handed slam, look up, mash your lasers, and barrell roll in one direction constantly. You'll swoop out of harm's way and still blast him in the process. Use the GamePad during this phase and mash away at the attack button to get the maximum amount of hits in. Trying to avoid all of his attacks only prolongs the fight, so keep blasting.

Once a hand is destroyed, switch to the Arwing, boost out of the arena, then come back in after Andross throws his hissy fit. When you return, fly to the top of the cylinder, which has the least number of lasers.

The last phase is either the easiest or the toughest, depending on how aggressive you are. Lock onto Andross using the Walker, and constantly blast his mouth. Do not stop moving, ever, even for one second. Just circle strafe around the arena, blasting at his mouth during every one of his attacks. Save your bombs until the end. When his weak point is exposed, dash over to behind his head, mash away with the attack button, and click the right stick until you expend all of your bombs. With any luck, you'll destroy him in one go without having to repeat the last phase.