What Hitman Go and Dungeon Master taught me about VR

So good, so expensive

Share All sharing options for: What Hitman Go and Dungeon Master taught me about VR

At any large gathering of developers, you're always just a few steps away from a game that requires a headset. Sometimes, like with Fated: The Silent Oath, these are experiences designed from their inception for the emerging technology. But it seems just as often, developers small and large are taking games created before VR was a consumer product and reimagining them in a virtual world.

Two of the most interesting games I saw at PAX East 2016 were of the latter variety. I played Robot Loves Kitty's Legend of Dungeon and Square Enix Montreal's Hitman Go differently than I ever had before, the first with an Oculus Rift and the second with an HTC Vive.

Neither game is new, but both taught me that I should think of VR as I've long thought about graphics: Graphics and VR can't make a bad game good, but they can make a good game better.

Calvin "Robot" Goble and Alix "Kitty" Stolze were standing in their PAX East 2016 booth, and they couldn't decide what to tell me about their game. I was watching, trying not to make it awkward, when I suddenly understood how the couple behind the wildest video game concept I've ever heard works.

I met the founders of game maker Robot Loves Kitty two years ago at PAX East 2014. We sat at an enormous round table just outside the show floor. They weren't officially at the show, and they didn't have a game, really. instead they had an idea and a rough demo for Upsilon Circuit, a game with a narrator called Ron Raygun, who looks like Ronald Reagan as imagined by Max Headroom. It's game whose premise postulates that, at some point in the 1980s, New York City disappeared.

Goble ran a choppy demo on a laptop. The isometric, procedurally generated dungeons looked interesting, if not entirely compelling. It wasn't until they told me that Upsilon Circuit is game you can play only once that I understood how strange this project was — and how unique its creators were. 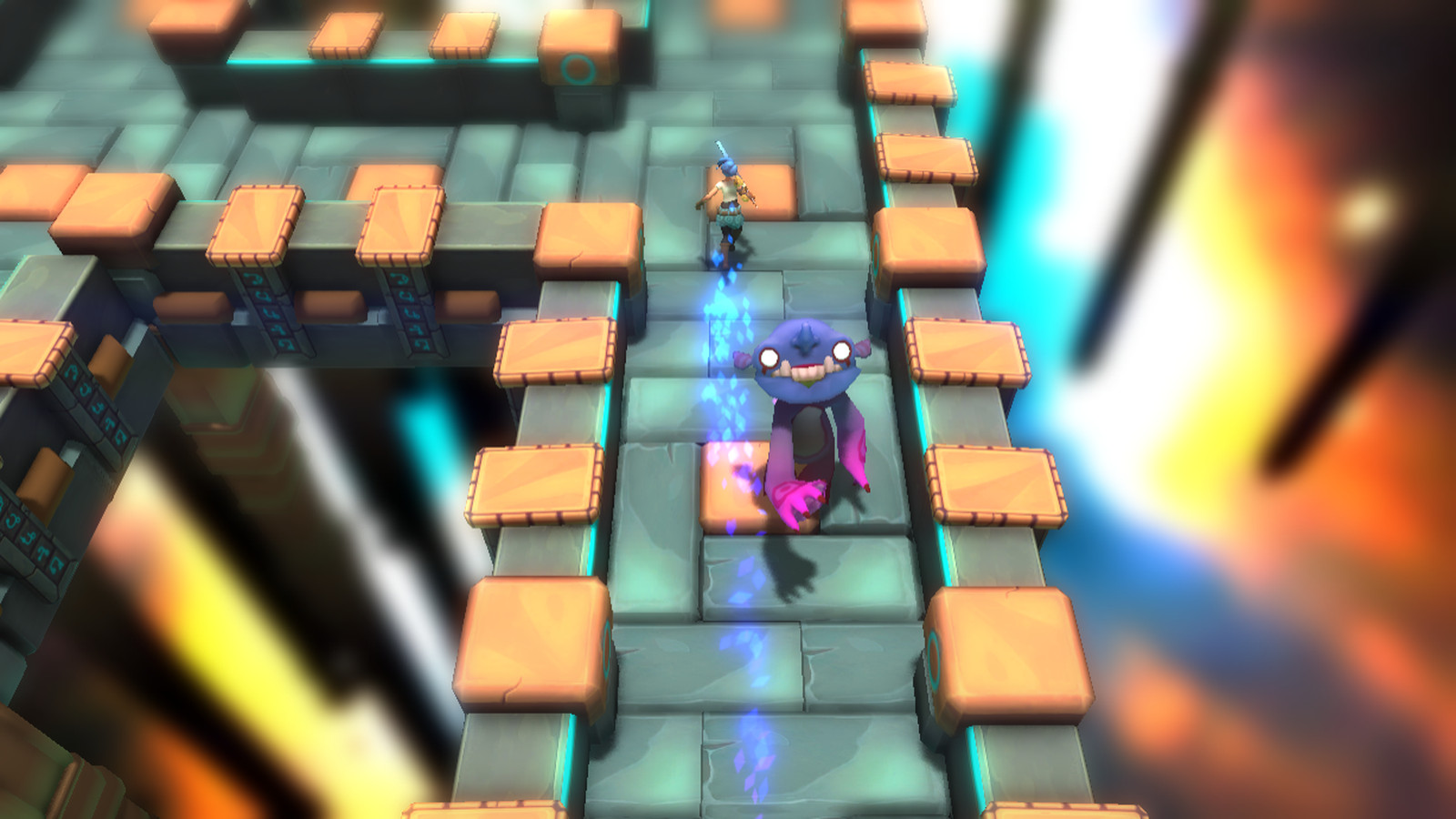 Upsilon Circuit is a game you can play only once, and when it ends, it's gone forever

I hadn't seen the co-founders of Robot Loves Kitty for a couple of years, but we met again at PAX East this year, where they had a booth and an official presence on the show floor. They weren't showing Upsilon Circuit, even though about a month ago they secured funding that will help them finish the game. Instead, the couple that once lived in a treehouse came to Boston with an HTC Vive and their game Legend of Dungeon reimagined for VR.

Legend of Dungeon, a co-op dungeon crawler rendered with playful hybrid 2D/3D pixel art, has been on Steam since 2013. In one sense, what I played at PAX East is the same game that I could play right now on a PC with a traditional monitor, no VR required. But after about 10 seconds under the hood of a VR headset, I decided that this was the best way to play Legend of Dungeon.

I stood in Robot Loves Kitty's booth with a controller in my hand, but instead of an isometric dungeon maybe a foot wide on a monitor, I saw an isometric dungeon eight feet wide floating four feet off the ground in front of me. I looked down to find a subtle red arrow hidden just below my field of view. It pointed to my character's location, and I took a few steps to my right and used the controller to walk my character out of a door and toward me.

I made my way through a couple of levels, swinging at pixelated snakes and other monsters. I walked back and forth through the dungeon, both in the real and the virtual world. When the coast was clear, I got down on my knees and looked at the underside of the dungeon. I stuck my face in the middle of a virtual waterfall just because I could. I grinned like a dope as I dreamed up new, silly things to do.

These are entirely inessential parts of the experience, but they are all still deeply impressive — and, though the term is overused, immersive. When I took off the Vive to talk to Calvin again, it was disorienting. Something in my brain fully expected to see the level in front of me, but of course it vanished with my headset.

He told me that it wasn't much work to transform Legend of Dungeon into a VR experience. Thanks to Unity, it sounds trivial. Legend of Dungeon's VR experience is available now if you opt to the beta build on Steam, but the team at Robot Loves Kitty isn't done. Wouldn't it be cool, he asked me, if there were a version where you could resize the game? Maybe you don't want to stand and play. Maybe you want to sit cross-legged on the floor. Legend of Dungeon could be a foot or two wide and sit in front of you on the floor like a Lego model of a video game. Wouldn't it be cool? Of course, I said yes.

Square Enix Montreal was founded to create a new Hitman game, but that plan went to pot. Sort of.

Instead, Agent 47 returned to Denmark and its longtime developer Io Interactive for its next console and PC game, while the Canadian studio found a way to reinterpret the franchise. Hitman Go does a remarkable job of retaining the series' core principles — assassinations, planning, optional objectives and stealth, just to name a few — and distill Hitman into something like a digital board game. 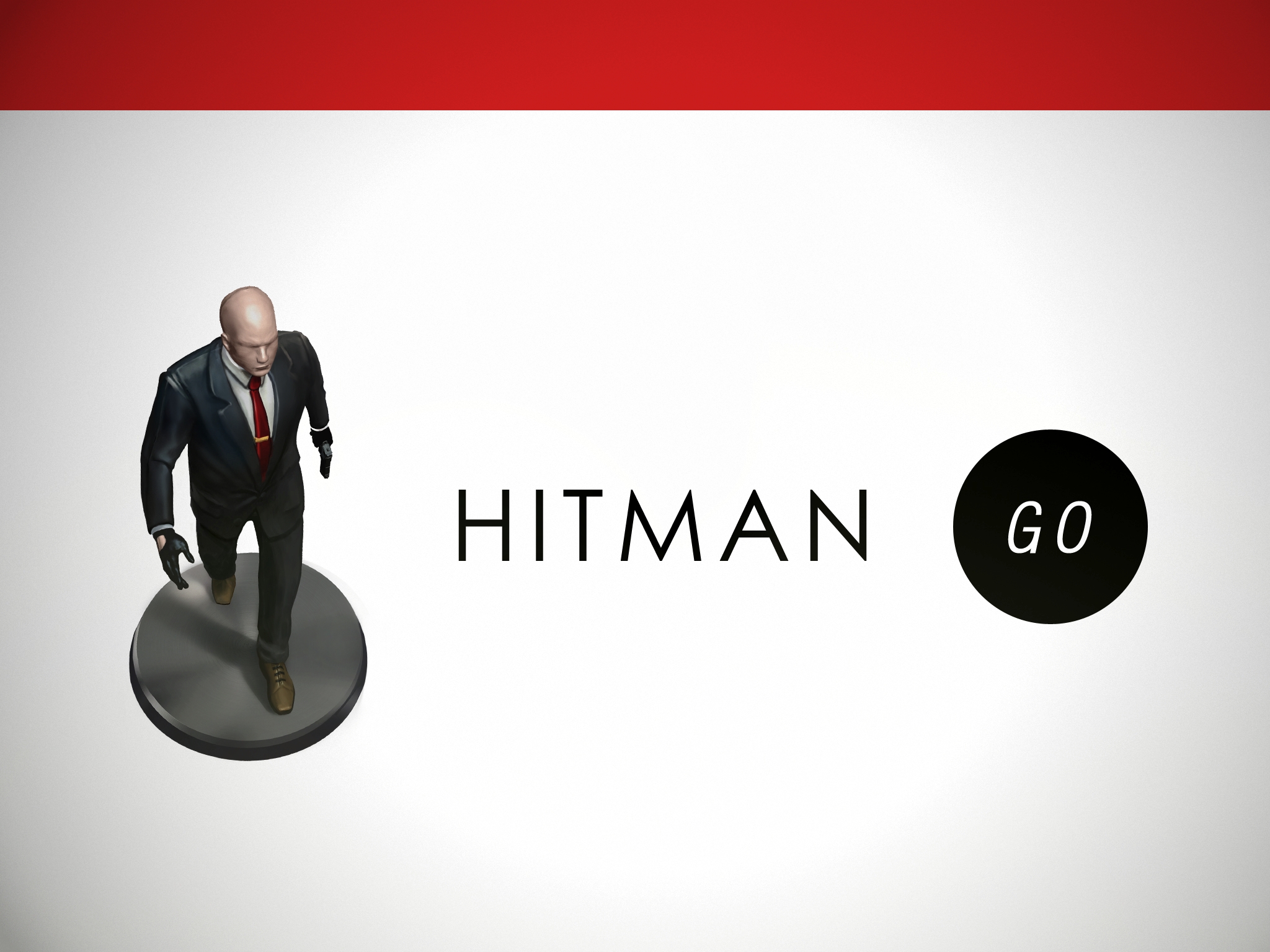 I've played a bunch of Hitman Go in several different places. I've also played a lot of is Tomb Raider spinoff, Lara Croft Go. I've told anyone who's asked (and plenty who haven't) that these games are way better than you might think if I described them as mobile versions of Hitman and Tomb Raider. We don't review many mobile games at Polygon, but we reviewed Hitman Go and called it "a great game."

Since its initial release in 2014, Hitman Go has moved from iOS to Android, PlayStation Windows PC — basically, anywhere that anyone might want to play it. Its migration continues. This May, Hitman Go will enter virtual reality. At PAX East 2016, I put on an Oculus Rift and played the game once again. And just like Legend of Dungeon, it didn't take more than a few moments for me to conclude that I'd rather play it in VR than anywhere else.

In part, that's because it's not exactly the same game I've played elsewhere. Hitman Go's minimalist aesthetic always made me want to reach in and touch the delicately crafted chess pieces in the board. Of course, I can't do that in VR any more than I can do that on an iOS device or a PC, but I could get closer and more personal with the game than I can on any other platform. 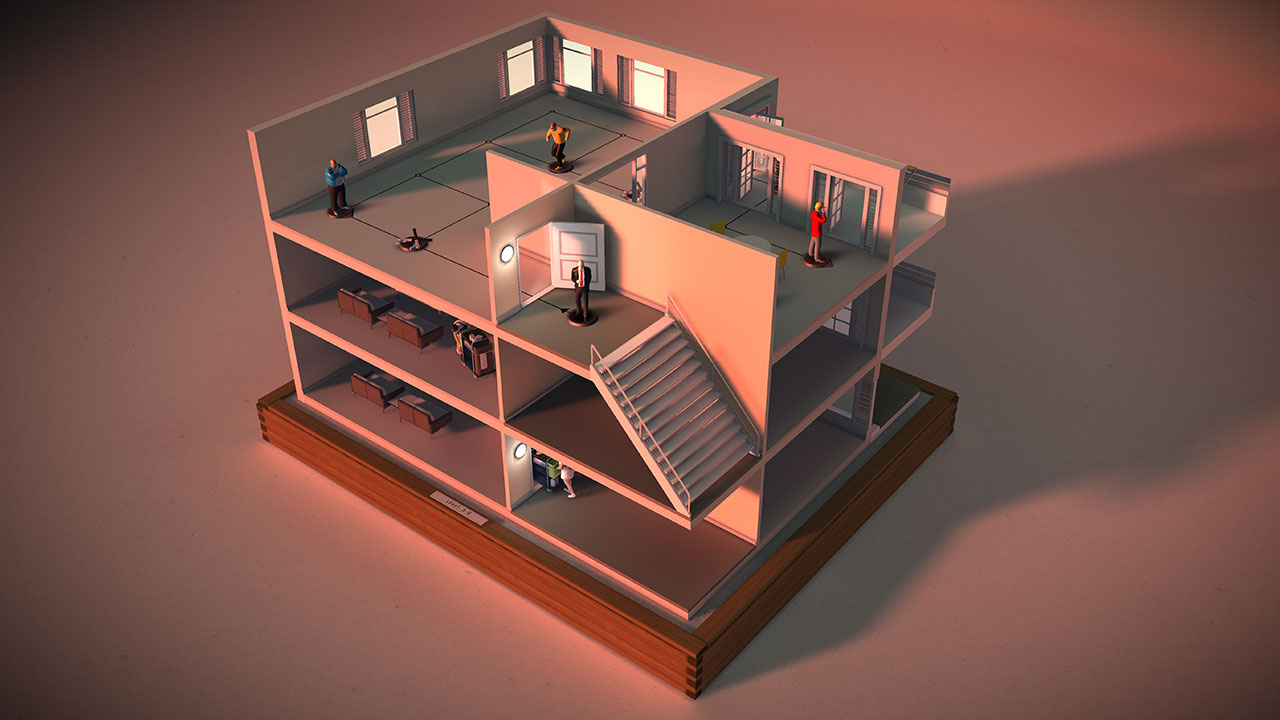 I could lean in and get closer to the board, and that actually made me feel like a better player, as the simple act of moving around the board gave me more ideas about strategy. As the game progresses, the levels get more intricate, and VR let me get closer looks than ever before. That has nothing to do with gameplay, but it has everything to do with my longstanding desire to look at the pretty world just a little closer.

And that world is better in VR than it ever was on other platforms. Players inside that virtual world have more freedom of movement than ever before, and Square Enix Montreal embraced that. Rather than restrict how much rotation a player could impose on any board, it created parts of each that didn't exist before. In VR, Hitman Go players will want to look around to the back of a board. They can, and when they do, they'll see everything — including things that didn't exist before Hitman went virtual.

Writing about these games makes me want to play them again. I'm certain that I will, but I'm also certain that I'll be just a little bit bummed out that I'm not in VR. (Don't worry. I will probably survive this tragedy.)

Both are also proof that VR has applications beyond the games designed solely for the medium. Buy a headset, and it could be that games you already own get a new lease on life.

Dungeon Master and Hitman Go are just the latest products reminding me how lucky I am to cover emerging technologies like VR … and also how much money I'm going to spend buying so many new toys. (Also a tragedy that I will likely survive.) 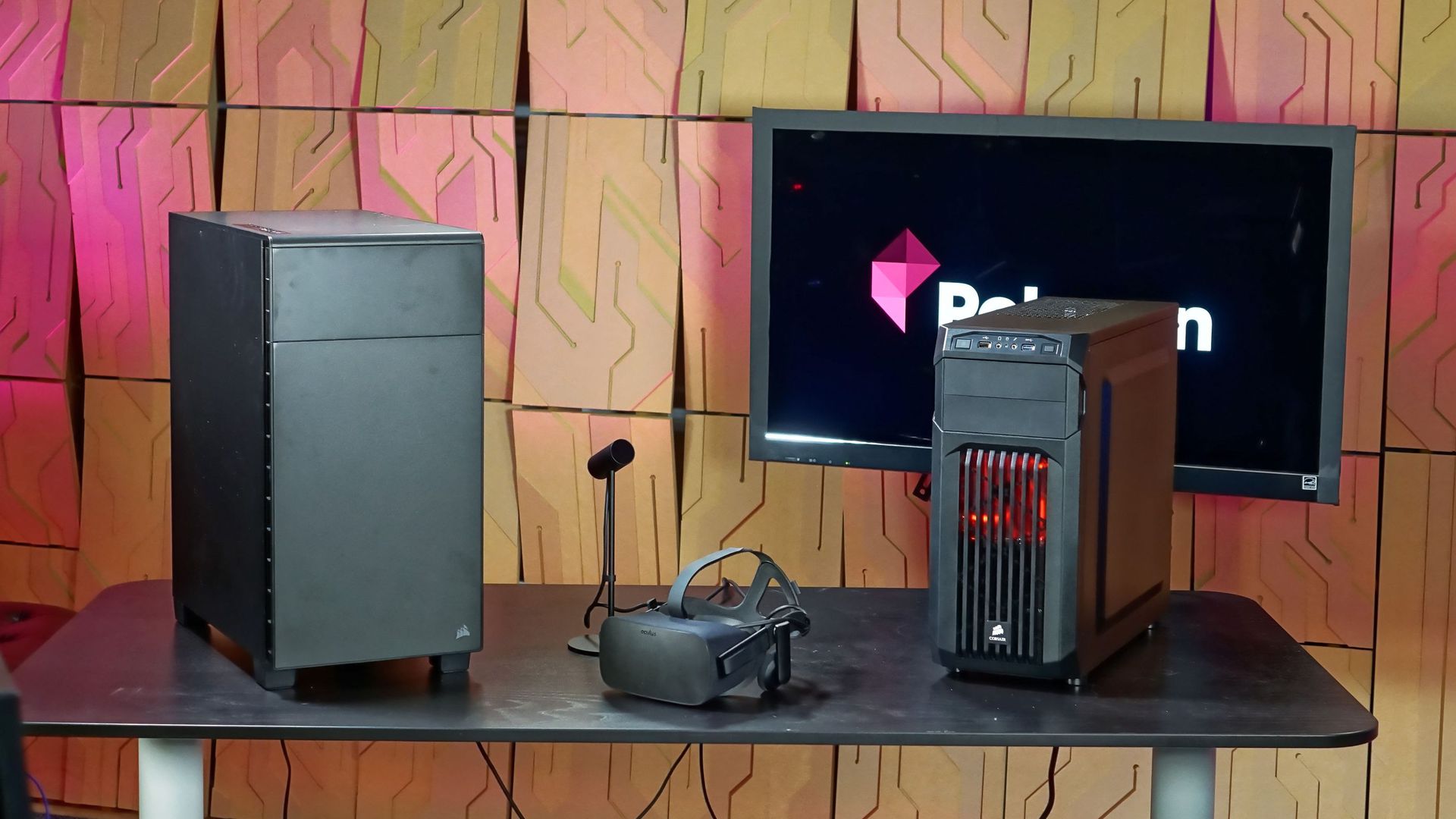 The guide to building a PC for virtual reality

They're also reminders that virtual reality's potential is difficult to understand without strapping a device over your face and playing something really cool. I certainly didn't grok it until I nearly fell over peering at the earth outside of a spaceship.

To get dizzy or play a couple of games I already own in neat new ways requires a substantial investment in hardware. Even as much as I enjoy these games and what they've done, I have hard time imagining that the one-two punch of Dungeon Master and Hitman Go are going to convince anyone — including me — to spend hundreds of dollars to have that at home. VR needs more than two punches, which is where the designed-for-VR games come in. That combo is much more appealing.

Ultimately, the very things that makes Dungeon Master and Hitman Go so impressive exist outside of the medium on which you play them. Crappy games in VR will still be crappy games. But good games can be even better.

Now if you'll excuse me, I'm going to play some Hitman Go. On my iPad. Like an animal.