Can FromSoftware pull off an incredible, deep RPG experience for the third year in a row?

Dark Souls 3 may be the first crack in the armor — the first sign that FromSoftware cannot quite keep up with the breathless pace it has set for itself.

Following 2014's Dark Souls 2 and 2015's Bloodborne, From has released a full game in its signature action role-playing style every spring — not to mention a full redesign of Dark Souls 2 as well. It's a release schedule that seems harsh when it comes to shooters like Call of Duty; for 50-plus-hour RPG epics, it's downright unfathomable.

For the third year in a row, the studio has pulled it off, and Dark Souls 3 remains a deep, complicated, fascinating experience. But it's also one with some big flaws, weaknesses that are more visible and harder to ignore than they've ever been. Dark Souls 3 isn't a failure, but it's also a long shot from the well-honed RPG experience I've come to expect from the series.

Dark Souls 3 remains a fascinating experience, but its weaknesses are more visible

As with the previous Souls games, Dark Souls 3 tells an intriguing — if submerged — story: You take on the role of one of several "Unkindled," an undead hero cursed to wander the land of Lothric. The world is on the verge of an apocalyptic, unending darkness, and the only hope is to "link the fire" by hunting down and killing all the heroes who have linked the fire previously.

It's a familiar setup, but it gets you to what really matters in the Souls formula: exploring a giant, interesting world and fighting really challenging enemies within it. For the latter point, FromSoftware clearly took criticisms of Dark Souls 2's relatively mundane enemy lineup to heart. The third game in the series is full of the most unusual and inhuman opponents in its history. And when it does settle for human-shaped enemies, they're smarter and more demanding in combat than they've ever been.

Dark Souls is a series known for its challenge, and Dark Souls 3's combat easily tops the series in that regard. Several of the game's bosses are far and away the hardest I've ever faced, encounters that I found intimidating and mechanically demanding. The game's final pair of boss fights, in particular, had me tearing my hair out. Even the most difficult enemies follow recognizable patterns, however; memorizing and overcoming these incredibly difficult opponents left me exhausted and weary but smiling.

FromSoftware has also added some new tools to deal with the increasing challenge. Most notably, each weapon in Dark Souls 3 features a "weapon skill," a new special move that can take the form of an ultra-powerful attack with a long windup, or a unique buff to your strength, or even a spell, like tossing a fireball. These new options add another layer to the combat scenarios, facilitated by the introduction of focus points.

Focus points operate similarly to magic points in other RPGs, and in fact they're also used for casting spells now. Moment to moment, this means players have another resource they need to manage between the game's bonfire checkpoints, another wrinkle to Dark Souls 3's already complex base combat. I never felt absolutely forced to use these new tools — outside of one or two gimmicky fights — but I enjoyed the added depth they provided, and they're likely to make the intense player-versus-player encounters even more ridiculous. I especially appreciated the strategic choice between a focus on traditional healing or restoring my focus points, a dilemma the series has never presented before.

Dark Souls 3 has also learned some lessons from its more action-oriented horror spinoff, Bloodborne. While players can once more cower behind a shield as desired — something I welcomed, as turtling up is my preferred play style — both enemies and characters move faster than in either Dark Souls or Dark Souls 2. Dodges and parries feel more necessary, and invincibility frames — that is, the time during which your character cannot be hurt after dodging — are more pronounced. This all adds up to a more dynamic combat system that remains as demanding and challenging as ever. 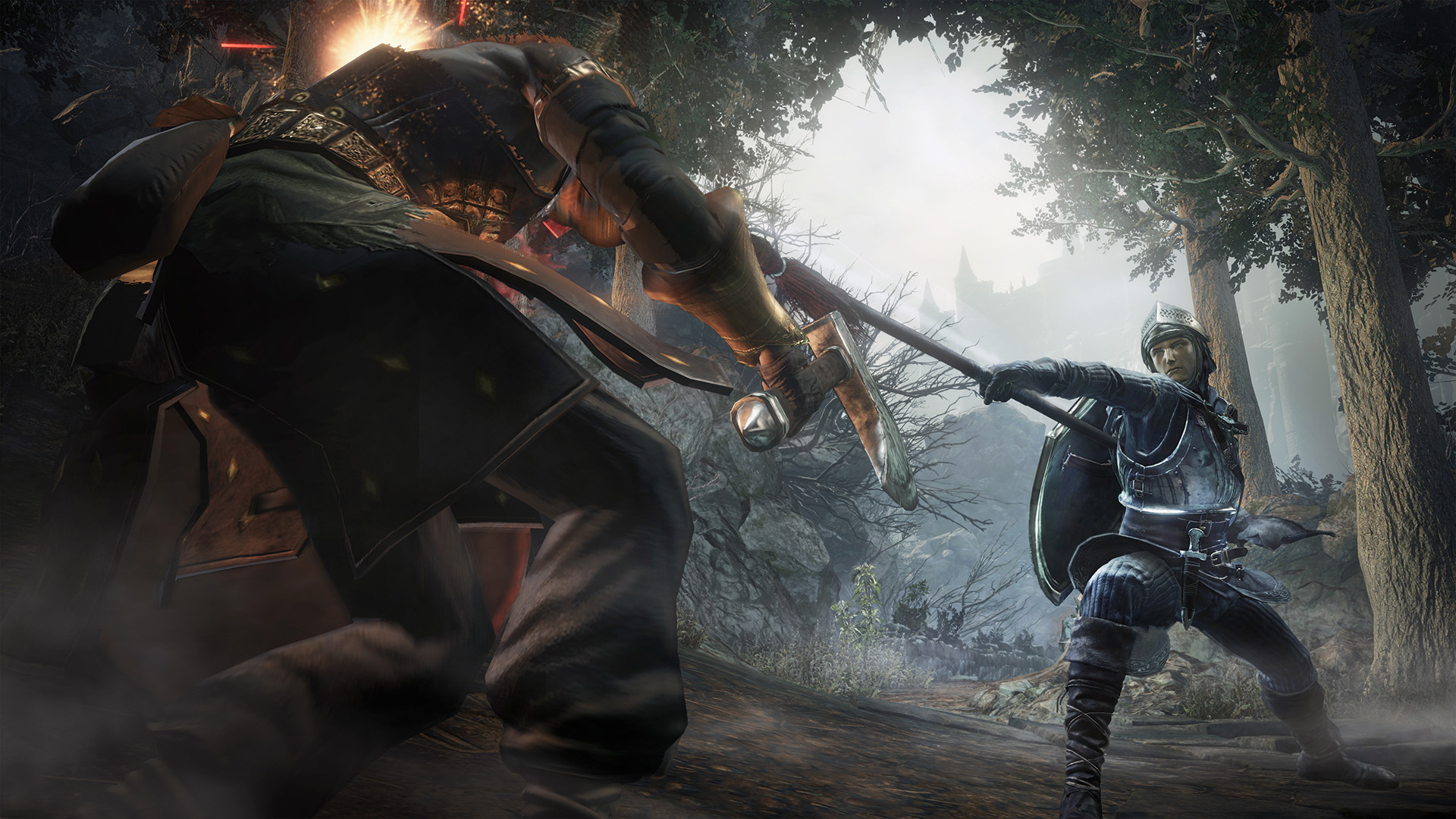 Perhaps the most disappointing part of Dark Souls 3 is that it is a complete technical mess — at least in the debug PlayStation 4 version that we played. We were playing a final build with the day-one patch applied, but the game still consistently ran terribly, with the frame rate stuttering and frequently dipping into or near the single digits across a variety of areas. We've also received a report of at least one repeatable crashing bug that Bandai Namco says will be patched soon after release.

While Dark Souls 3 has vastly improved on the lengthy loading times that plagued Bloodborne, it's hard to feel like it was worth this trade-off. And while we weren't able to test the game on Xbox One or Windows PC, the former of those two platforms reportedly has issues of its own. The frame rate problems never detracted from my overall enjoyment of the game, but it was discouraging to see such a beautiful game made to run like sludge.

We'll continue testing the game on new platforms and as patches are applied, and will update the review if these technical issues are improved.

If only that dynamism were matched in Dark Souls 3's world. Dark Souls 2 proved somewhat divisive in how its world leapt from area to area in ways that didn't make logical, geographical sense. In some ways, Dark Souls 3's world design seems like an extreme counter for these complaints, and not always for the better. It's logical to a fault — that fault being that it never really goes anywhere particularly interesting. The vast majority of your time in Dark Souls 3 will be spent in castles or the stone walkways of villages built beneath those castles. There's a swamp. There are some catacombs. It's all stuff we've seen before, and while I wouldn't expect a game with no repeated themes, I was disappointed at how few surprises Dark Souls 3 had waiting.

Some of that lack of surprise also rests on the game's frustratingly linear design. Both Dark Souls and Dark Souls 2 (as well as Bloodborne) followed a formula of starting in a contained space that slowly blossoms into ever more complex patterns. You begin with one direction to go in; you end up with many choices, exploring each and whittling them down one by one. In Dark Souls 3, I only had one or maybe two paths to explore the whole time. Most of the side paths that I left behind and then returned to were extremely short, ending virtual feet from where they began. I never felt lost or overwhelmed by this massive world; in previous games, those emotions played a vital role in Dark Souls' captivating sense of exploration.

Dark Souls 3's level design feels less ... intentional, in a way that extends well beyond the size or complexity of the world. At a Souls game's best, finding a bonfire to rest at or unlocking a new shortcut brings an intense wave of relief, a sense of exhilaration at having survived the latest challenge. Here, I was left saying 'huh?' or shrugging my shoulders just as often as I felt positive. So many of the shortcuts are spaced poorly, presented at moments where they don't really make a significant impact.

In one particularly noteworthy instance near the end of the game, I defeated a tough boss, which places a bonfire in the boss room. I rested up and left the room to explore the next area and, less than a minute's walk from the boss room, still in sight of that bonfire, I found ... another bonfire. Just beyond this, I stumbled onto a locked door. Where the series would normally tuck the keys away into some obscure corner, requiring exploration or maybe taking out a difficult miniboss, here they were on a corpse directly in front of the door. Hard to feel accomplished about that discovery.

It's not that Dark Souls 3 doesn't have secrets. It has plenty that I found and, I'm sure, lots that I haven't discovered yet. But after years of being groomed to expect confusion and aimless wandering, I couldn't help but be disappointed in the boring, straightforward main path.

At this point, most Souls players know what they're looking for in a new entry. Your personal expectations for the series will play a key part in your enjoyment of Dark Souls 3. If you play these games for the intense, controller-clenching combat and the excitement of invading other players' worlds, then there's a lot here to keep you busy and happy. But in so many important ways — its world design, its pacing, the technology powering it — Dark Souls 3 falls short of the mark. Do you play for the joy and stress of exploring dangerous, intricately crafted places full of hidden elements and endless side paths? Then I suspect you'll join me in being a little let down with the direction this sequel has gone in.

Dark Souls 3 was reviewed using a final version of the game running on debug PlayStation 4 hardware, with the day-one patch installed, provided by Bandai Namco. You can find additional information about Polygon's ethics policy here.