Hands-on with Shiny, the nonviolent platformer

Maybe robots are nicer than people?

Share All sharing options for: Hands-on with Shiny, the nonviolent platformer

The second-best thing about Shiny is what you don't do. But the best things about Shiny are all of the things you can see behind it.

Shiny is the product of Garage 227 Studios, a game maker based in Sao Paulo, Brazil, which is about as far away from the mainstream metropolises of development as you can imagine. And yet, the tiny team there is on the verge of releasing Shiny on Steam, thanks to community support from Steam Greenlight, and Xbox One, thanks to Microsoft's self-publishing for independent developers, ID@XBOX.

Garage 227 is a, well, shining example of the democratization of the enormous changes distribution and publishing that have emerged in the last few years. Gone are the days of teaming up with publishers and console platform owners granting tokens to publishers. Today, even the smallest, most remote developers can reach a worldwide audience and see their games appear on the PlayStation Store, Steam and the Xbox Marketplace.

That's not the only sea change making Shiny possible. Garage 227 is building the side-scrolling platformer in Unreal Engine 4. Just about a year ago, that popular game engine's creator, Epic Games, made the game completely free for anyone to use.

"The state of Unreal is strong, and we've realized that as we take away barriers, more people are able to fulfill their creative visions and shape the future of the medium we love," Epic founder and CEO Tim Sweeney wrote alongside the announcement. "That's why we're taking away the last barrier to entry, and going free."

A few years ago, in other words, much of what Garage 227 is doing wouldn't have been possible. Then again, a few years ago, the studio's founders were still in college.

Daniel Monastero said he was nervous, but I wouldn't have known that if he didn't come clean. Still, I got it. This was a big week for him.

The co-founder and I had just met on the PAX East 2016 show floor, where Garage 227 was handing Xbox One controllers to anyone who wanted to play the first publicly playable version of Shiny on Microsoft's latest console, including me. 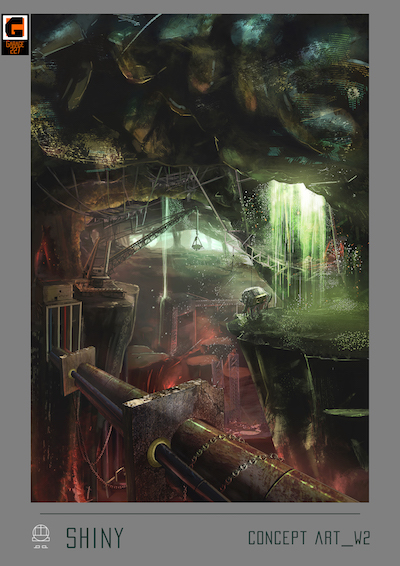 As I played, I could hear the enthusiasm in his voice as he talked about the game, the studio's partnerships with Microsoft and Epic and traveling across continents to show it to video game fans.

At first, Shiny looked like a standard 2.5-D Unreal Engine-based platformer. And in some sense it is, with its brownish world, high contrast lighting and levels that use perspective to fade into detailed, living backgrounds that you can't explore from your limited plane of movement. Like Shadow Complex years ago, Shiny seemed like the logical evolution of the platformers of 8- and 16-bit-era consoles. That's conceit tugs on the heartstrings of a guy like me who cut his teeth on the NES and SNES.

It took me a few minutes to realize what sets Shiny apart from its contemporaries and the side-scrolling platformers I played as a kid. And at first, I misinterpreted what was happening. As I ran around the inside of a dank industrial facility hopping from platform to platform, avoiding falling obstacles and more than once falling into pits, it didn't feel like I had much to do beyond running and jumping. And in some sense, that's true. But it's true with a point: Shiny is, in a sense, a nonviolent platformer.

You play as Kramer 227, an instantly lovable robot with a metal ball for a body, two big illuminated orange eyes and comparatively spindly arms and legs. In the distant future, humanity landed on the planet Aurora and began to mine it for its resources, using robots like Kramer to help.

Then, one day, humanity left. It didn't bother to take the robots with it.

Kramer realizes he's alone — and that things aren't just bad. They're getting worse. Aurora is on a collision course with the sun. The only hope for the robots left behind is Kramer 227, who players will take on a tour of 20 levels in Shiny.

As platformer veterans might expect, you'll gain power-ups along the way. Monastero skipped me ahead a few levels, and I found a jetpack strapped to Kramer's back, which was an enormously welcome addition. Shiny is difficult. Or at least it was for me.

It's hard to tell whether I just hadn't gotten the hang of Garage 227's particular flavor of non-floaty platforming or if the game could use some tuning. I died over and over in one area, and when I mentioned that I just didn't quite have the feel of jumping down, Monastero acknowledged that it's different than other games. It's deliberate, too. Kramer is a big metal robot, and jumping in Shiny acknowledges that with physics.

It's even more challenging, though. The levels I played were peppered with checkpoints, and I used the heck out of them. Sometimes that was because I mistimed my jump. Other times, that was because I forgot that everything I do — every move I made — sapped my robot energy. Move too much for too long, and you'll run out of energy, die and restart at the last checkpoint.

Of course, there are batteries and power stations to find and refill your energy, and finding them makes a minor accomplishment feel major. Shiny will reward those who get the hang of the game, too, with greater energy rewards.

Without these conceits, Shiny might've been forgettable. With them, Shiny feels unique. Perhaps not great, but certainly a unique and interesting take on a well-trodden genre.

Also, I have no doubt that I'm going to need those energy rewards when Shiny leaves Brazil once more and arrives on Steam and Xbox One this spring.