Hands-on with This War of Mine: The Board Game

Indie hit comes to Kickstarter for a tabletop version

Share All sharing options for: Hands-on with This War of Mine: The Board Game

Indie hit This War of Mine was both a critical and a commercial success for developer 11 bit studios when it was released in 2014. Now the game about the civilian side of modern, urban warfare is in the final weeks of a Kickstarter campaign for a tabletop version. Polygon received an early prototype in the mail last week, and I was finally able to put it through its paces over weekend. So how does it play?

A quick note about this prototype before we get into first impressions. The game arrived on my doorstep in an unfinished state, complete with a long list of assets and the like that are still on the drawing board. However, the major systems and mechanics of the game appear to be locked in. The final product may look a little different, but it should play the same way. 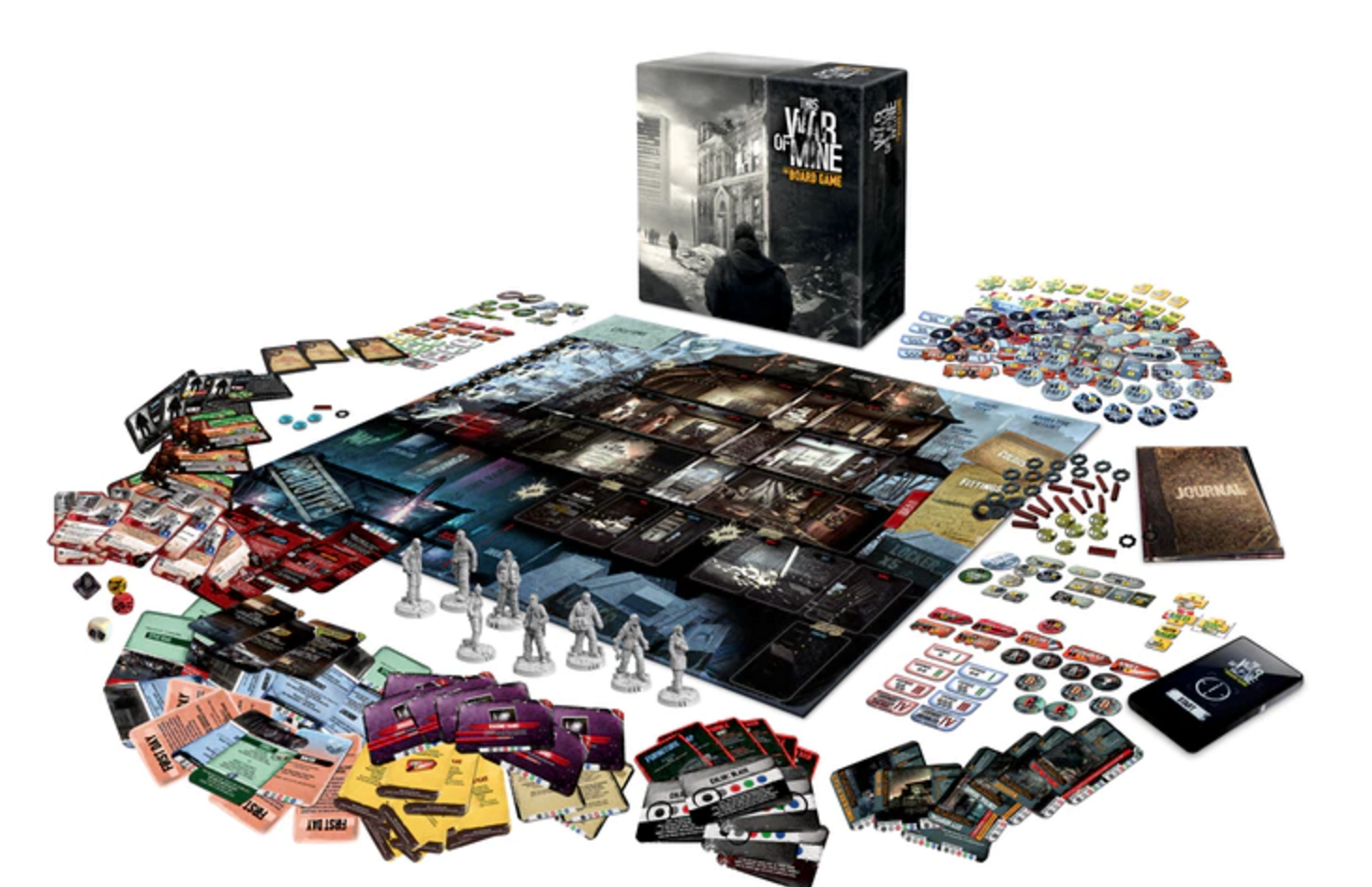 This War of Mine: The Board Game is a faithful recreation of the original, electronic experience. It's an adaptation that, if I'm being perfectly honest, might actually be a little too faithful.

What its authors have created is an elaborate game of solitaire that simulates This War of Mine's original gameplay loop nearly verbatim. Outside of the fact that there are bits of cardboard on the table and gorgeous miniatures to move around, this tabletop version doesn't appear to be doing anything novel to differentiate itself from the original source material.

That's not necessarily a bad thing, but it is unusual.

The basic concept of the game is that up to six players are responsible for the care and feeding of four or more civilians trapped inside an urban warzone. The engine driving the game is the "Event" deck, which accounts for things like the onset of winter and the escalation of fighting between warring factions. Somewhere near the bottom of that deck is a "Ceasefire" card, and in order to win the game players must get two of of their characters to live long enough see the end of hostilities.

The game turn is broken up into daytime, dusk and evening activities before looping back around to the dawn of the following day when the next Event is drawn. Play proceeds until the ceasefire is called, or until only one survivor is left alive.

During the day players will make small improvements to their shelter, using scavenged resources like wood and other materials to make beds or workshops. At dusk there's a chance that visitors could come calling, offering the opportunity to trade or add characters to your party. This is all just maintenance however, as the real tension of the game happens at night when small groups of survivors range out into a deadly city under siege.

Our prototype included six of the 12 playable characters, rendered in high quality resin.

To go exploring, players lay out several "Map" cards representing known features of the location that they're raiding — a locked back door, or the entrance to a cellar. That gets supplemented with a deck of cards from the "Unknown" deck, which is hidden from view. Players can either choose to deal with the challenges that they can see, or burn through the unknown events for a potentially higher reward in the form of bandages, ammunition and other rare resources.

Just about every single card pulled during exploration raises the noise level, and the higher the noise level the more chance there is of triggering an encounter. If that encounter is with other survivors or thugs, it's likely to turn violent. Combat uses a dice-based, press-your-luck style mechanic with more highly-skilled and more heavily-armed combatants getting more chances to land a hit.

While exploration itself is a delight, combat isn't very much fun at all. It plays out inside a small spreadsheet built into the game board and consists largely of moving tokens to the right until they accumulate enough damage that they die.

Ultimately, while the ruleset supports up to six players, multiplayer is accomplished simply by handing off the decision-making responsibility for each phase of the turn to the player on your right. Player one gets the morning, player two the afternoon, and player three gets to go exploring.

There aren't any mechanics in the game for betrayal or intrigue of any kind, which feels like a lost opportunity.

Players are simply handed control of the whole game, hotseat style, until all of the cards on the table are gone. There aren't any mechanics in the game for betrayal or intrigue of any kind, which feels like a lost opportunity. You should feel free to argue, the slim instruction manual says, but the final decision always rests with the player currently in control.

While the multiplayer aspects of the game left me cold, what excites me the most about This War of Mine: The Board Game is a unique feature called the Book of Scripts. Inside will be more than 1,000 narrative vignettes, keyed to nearly every card on the board, which will play out choose-your-own-adventure style during the course of play. These vignettes can be triggered by doing just about anything, and often take the form of a "Reality Impact," something unexpected that happens during a particular phase.

Only a small selection of the Book of Scripts was included with the prototype we were given, which makes it hard to really judge its impact on the game. Also in the works is a mobile app, which will the designers say further add to the game's immersion while managing things like the Book of Scripts content, an optional timer and a save system. 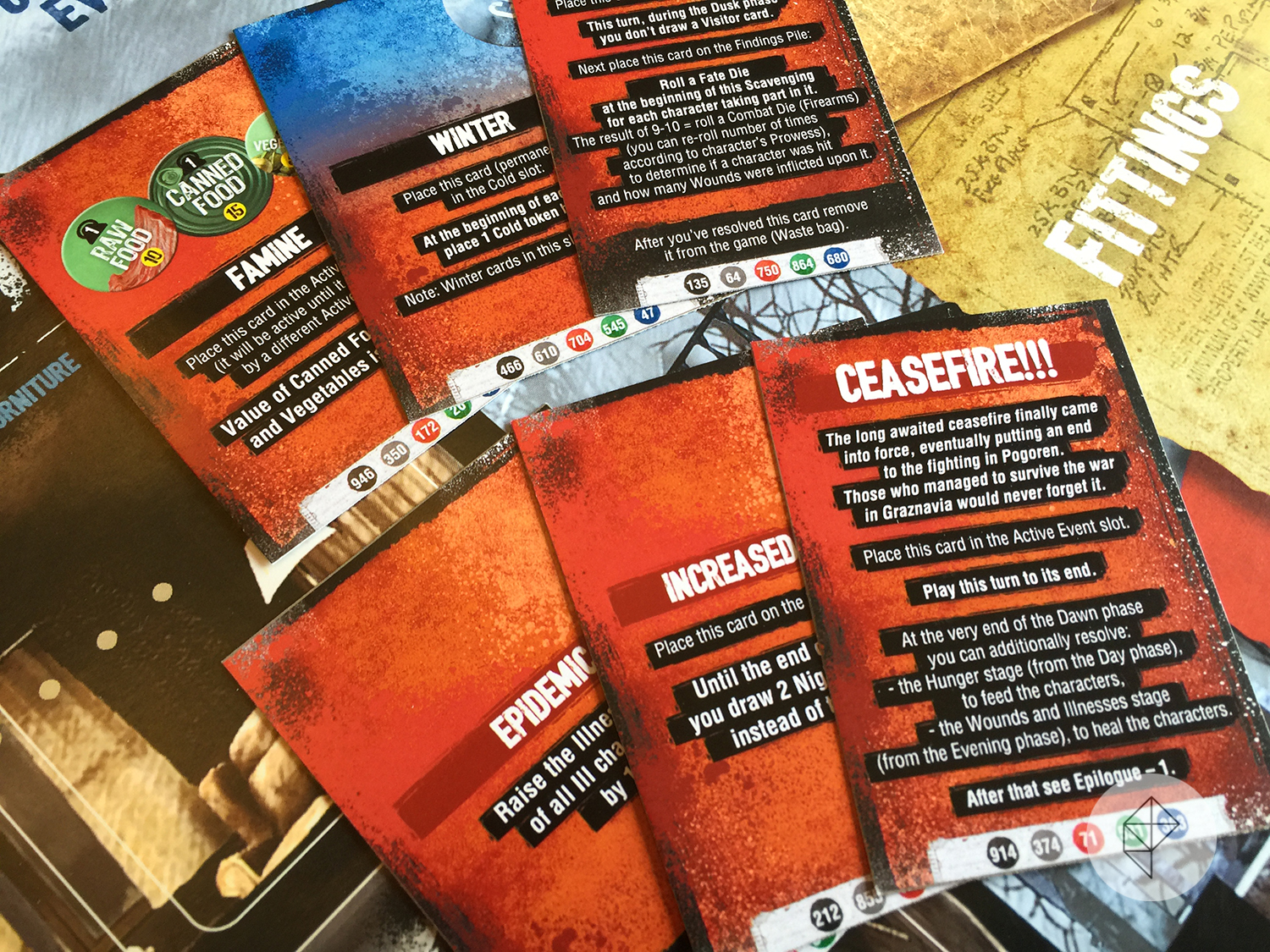 A selection of the game's Event cards. The numbers at the bottom reference the Book of Scripts, and are color-coded by the amount of cruelty and violence they represent. Those with a weak stomach are encouraged to remove certain colors from the game.

With less than two weeks left in the campaign, the project is already successful and includes a few nice add-ons that won't be in the final retail copy. At the time of publication it's raised more than $270,000 on a $58,000 ask. The base game will cost you $72, and is expected to ship in February of next year.

We plan to give our final impressions on the game when it ships.