The next afternoon, you receive your first assignment — find the campers who are setting off fireworks and get them to stop. On your way there, you'll need to stop at the nearest cache box for some rope.

Leave your tower and head west. You'll find lots to talk about with Delilah on the way.

Instead of heading directly to the cache box, you can go south and then east. Follow the Thorofare Trail on your map as far as you can. (You'll pass through a small gap in a rail fence; that's your indication that you're on track.) Rock will eventually block the path, but on a flat rock near where the trail ends, you'll see a turtle that you can report to Delilah, pick up and name. If you take it with you, it'll show up in your watchtower for the rest of the game. 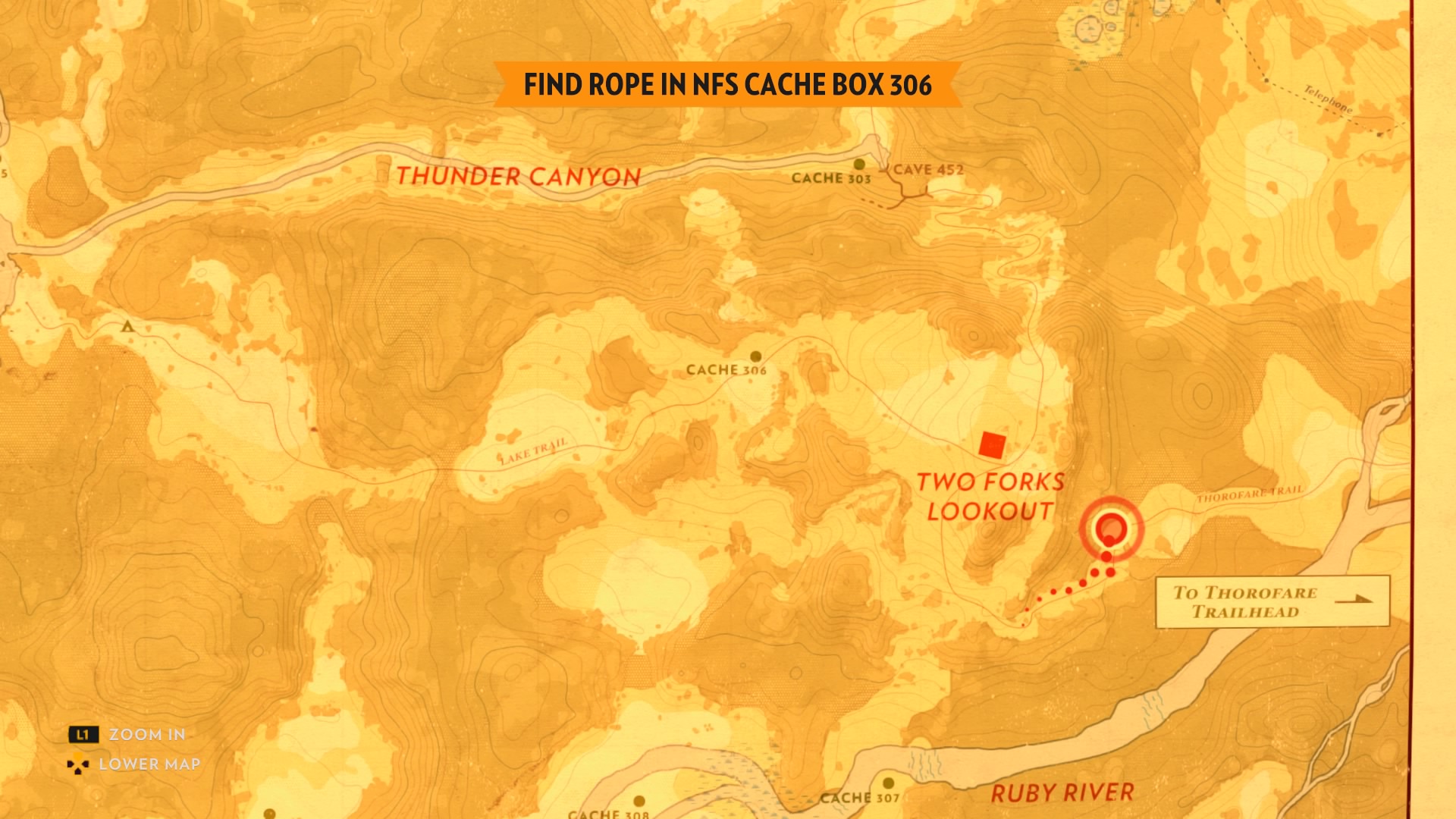 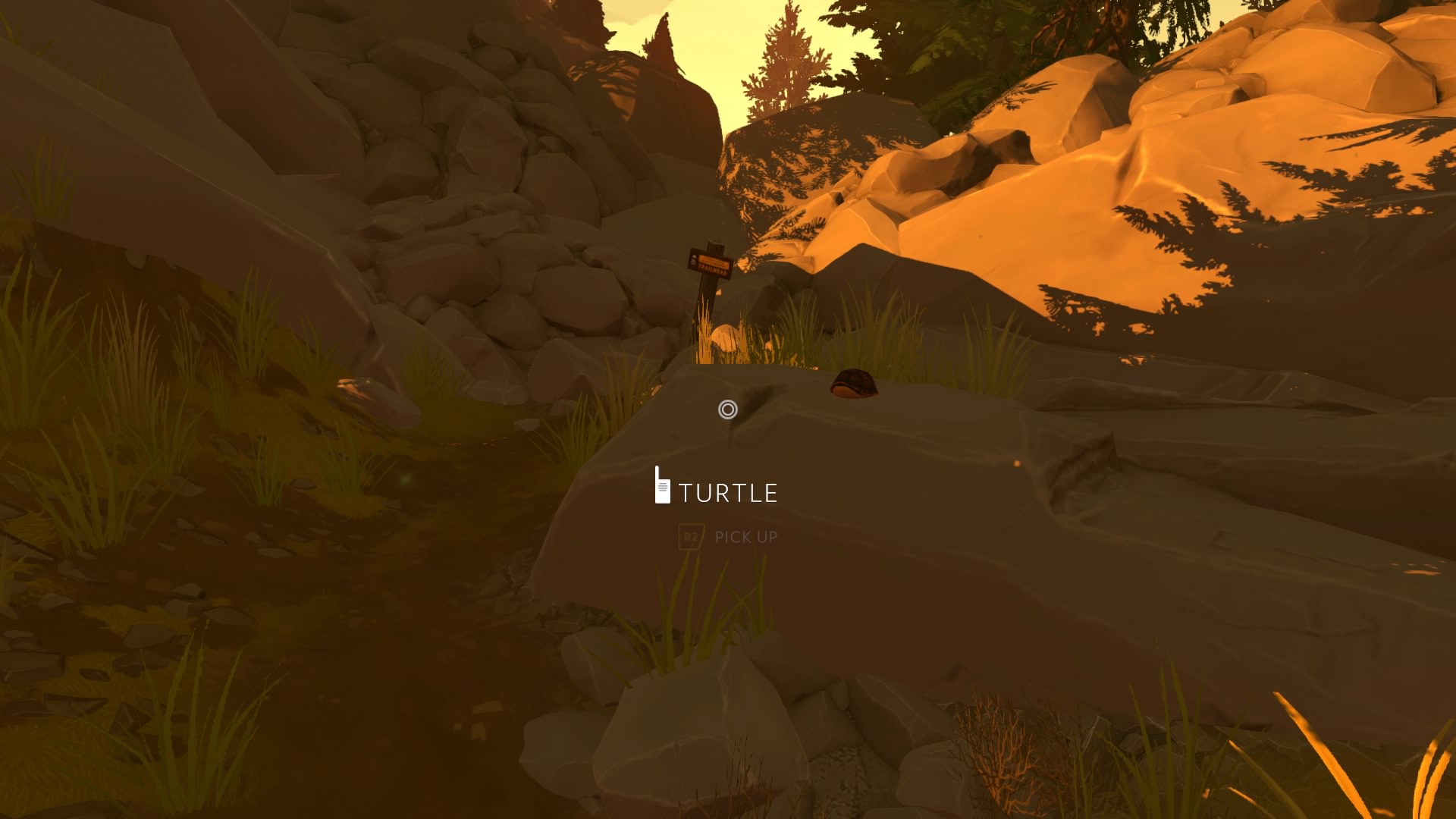 If you want a pet but don't feel like making a major detour just yet, you can also find the turtle in two other spots:

The turtle will show up at whichever of these locations you visit first during the game and will stay there until you adopt him.

Use your map and compass to make your way to Cache 306, down the trail to the northwest of your cabin. Enter the extremely secure combination lock code Delilah gives you to open the box and grab the old rope inside. While you're here, be sure to copy the info from the map inside — it'll highlight some trails and park features. 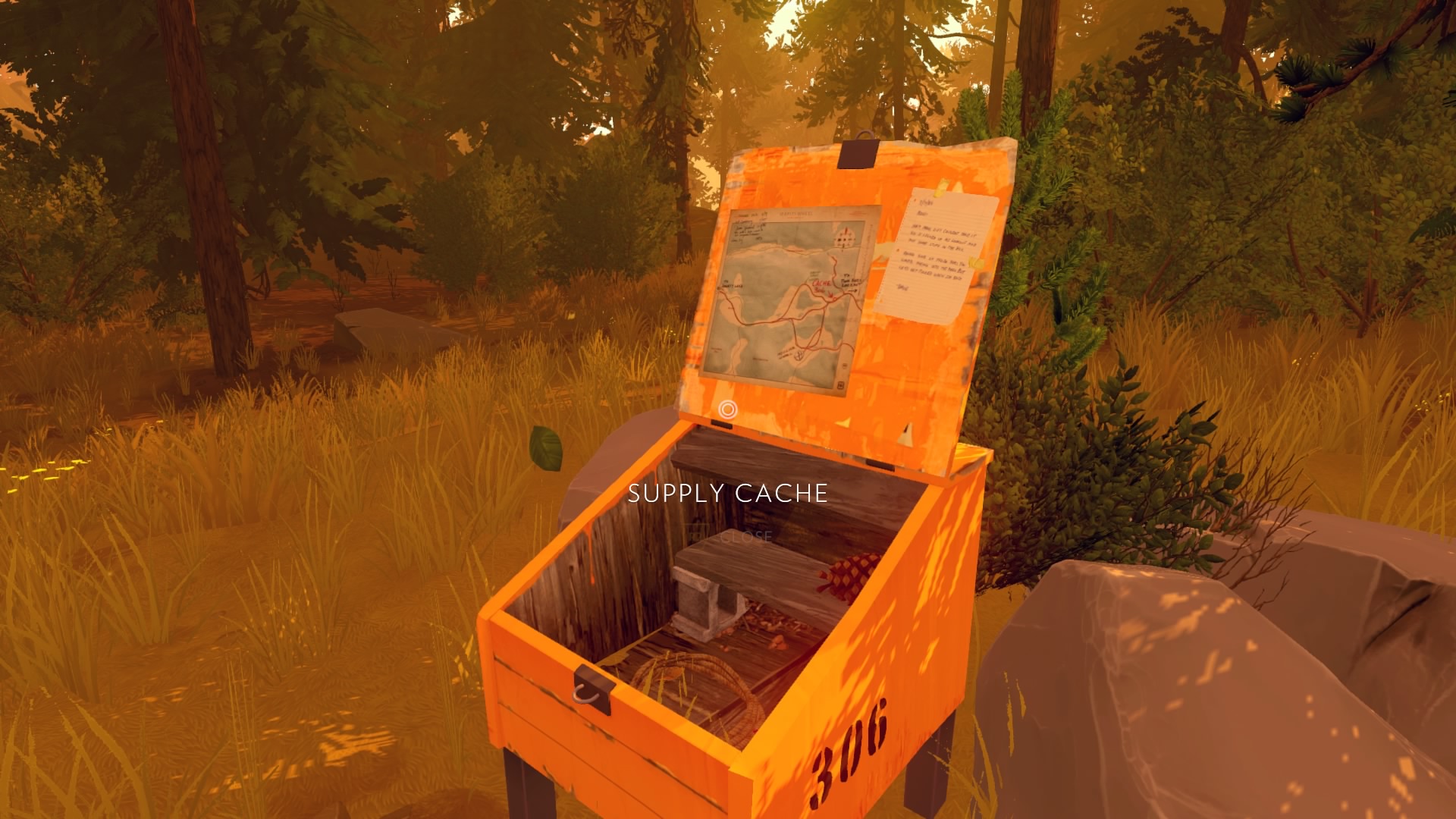 The first in a series of notes between two rangers who used to be stationed at Shoshone. Read the note, collect it if you like, and chat with Delilah about them.

There's a granola bar in the cache box. You can pick it up and eat it if you like, though Delilah will warn you against it if you talk to her about it.

Optional: Talk to Delilah about the medicine wheel

You can take a detour south from the cache box to see a bunch of old stones arranged in the shape of a wheel. Delilah will tell you a little more about it.

Optional: Talk to Delilah about the clawed-up tree

Apparently, you're out here with bears. Delilah will remind you of that.

Soon, you'll reach a shale slide with a spot you can rappel down. If you talk to Delilah about it, she'll let you name the spot.

Snap your rope onto the hook, swing down, and away you … AAAHHHHH! 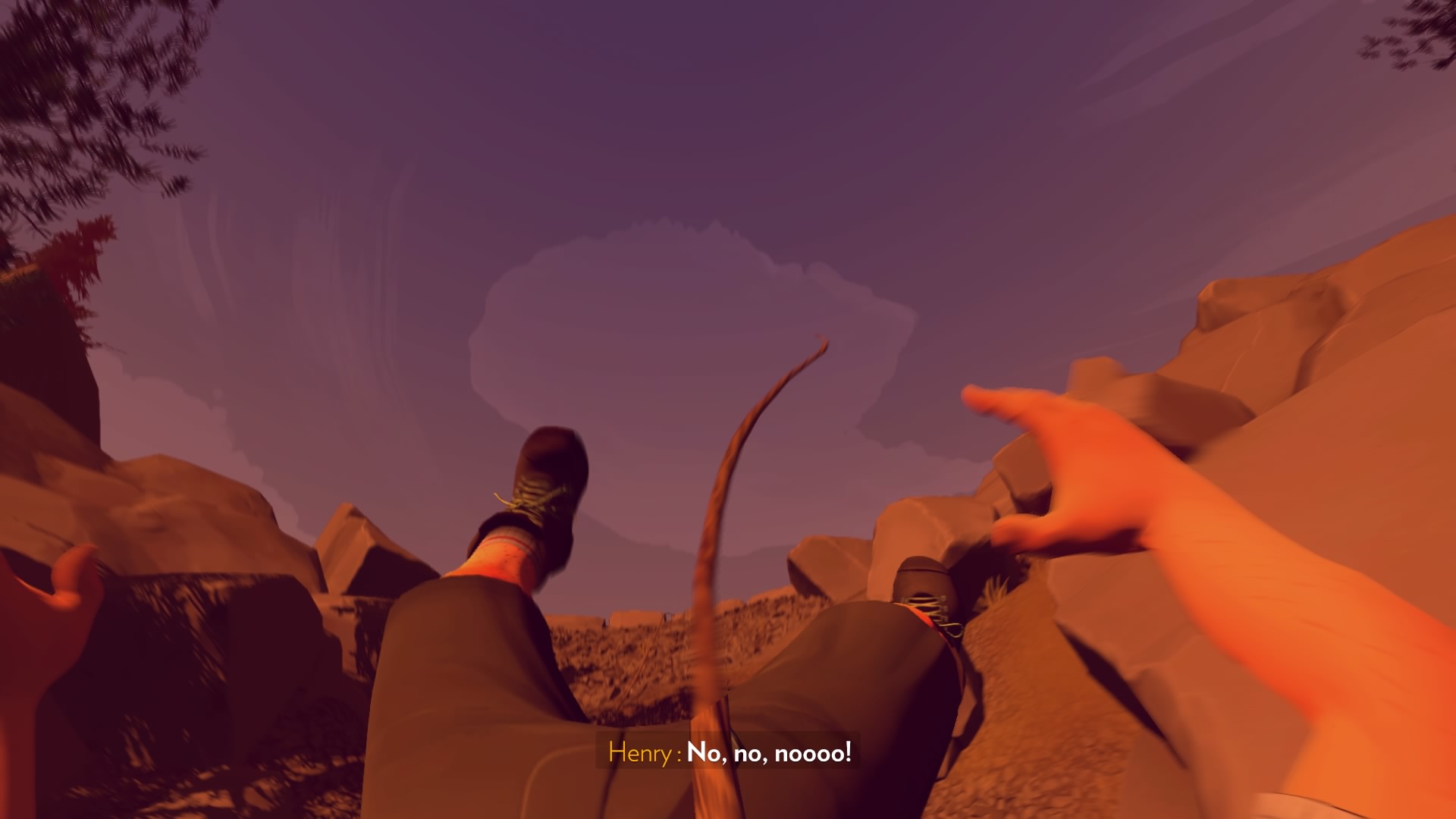 When you come to after falling down the slide, report the broken rope to Delilah, then keep moving toward the lake.

Optional: Talk to Delilah about the meadow

As you move west toward the lake, you’ll walk through a sunny meadow. Looks like a nice place to go camping. Delilah thinks so, too.

Soon, you'll find the spot where the campers were setting off fireworks. There's lots to report to Delilah here — an untended campfire, beer cans, a bottle of whiskey, a bundle of bottle rockets, two backpacks … and two sets of women's clothes. Uh-oh. (You can clean up the beer cans if you like and confiscate the whiskey and fireworks. If you take them, they'll show up in your watchtower later.) 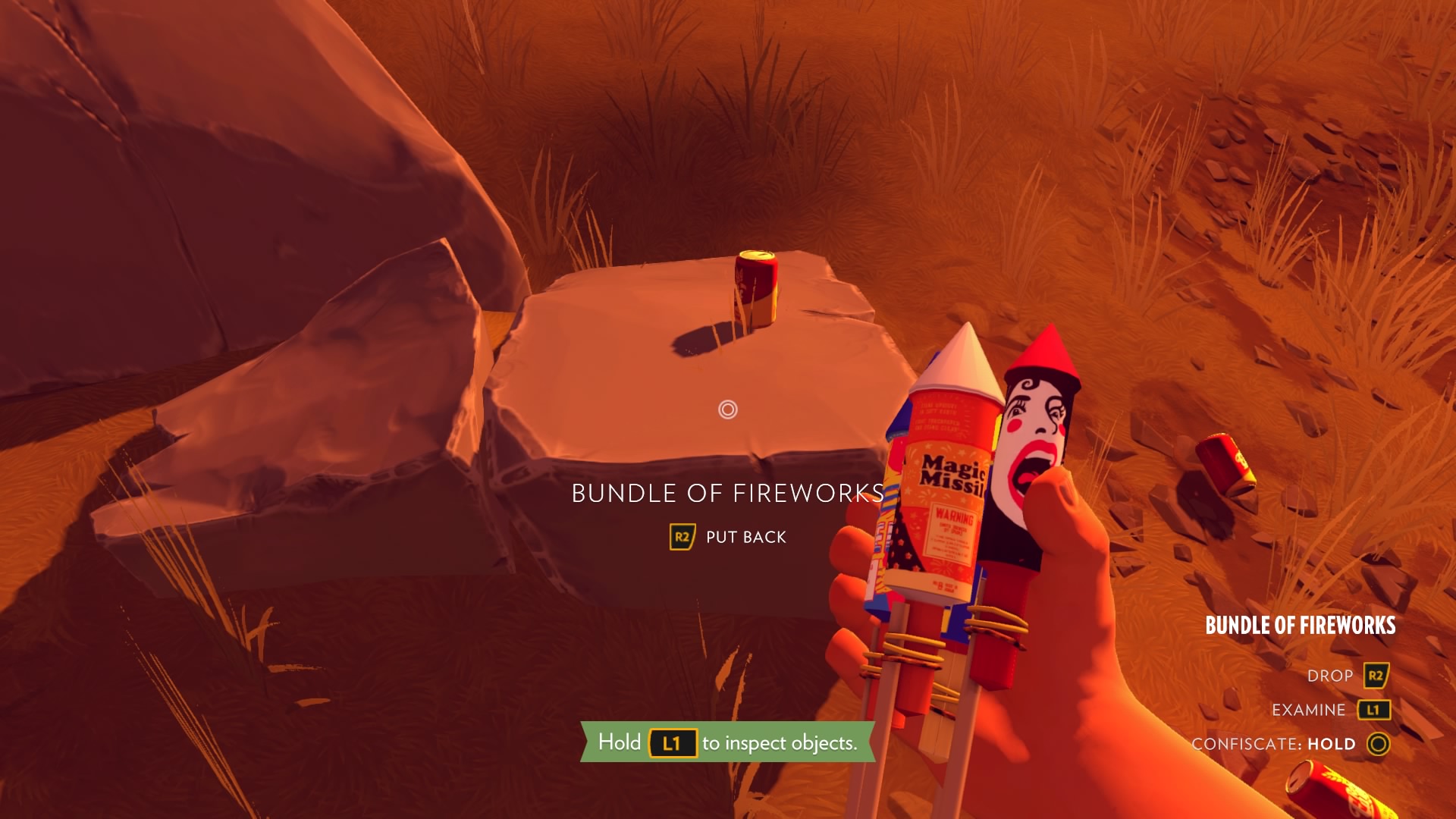 Head up to the rocky area north of the campsite to find a raccoon, which you can report to Delilah if you want her to make fun of you. 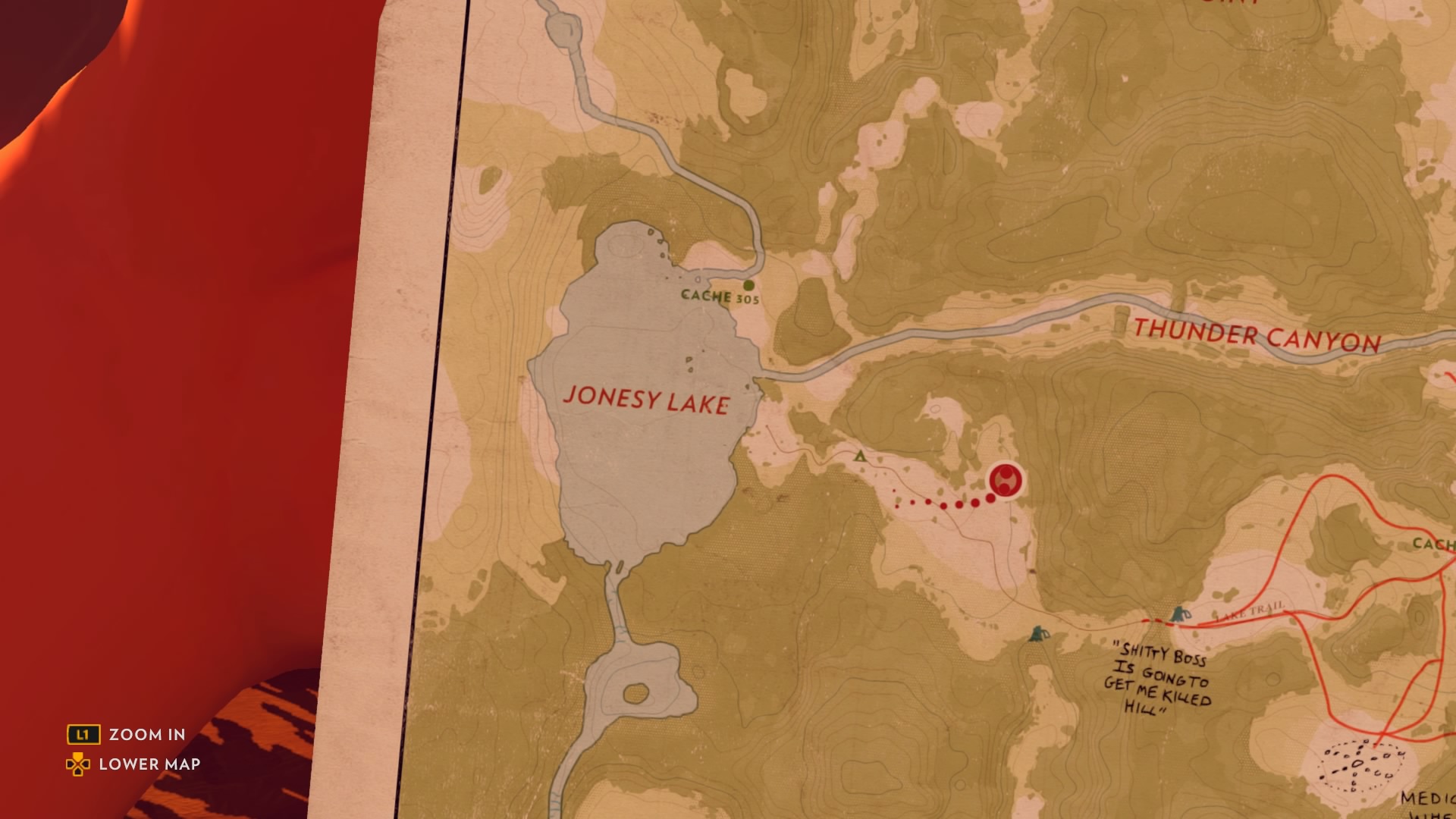 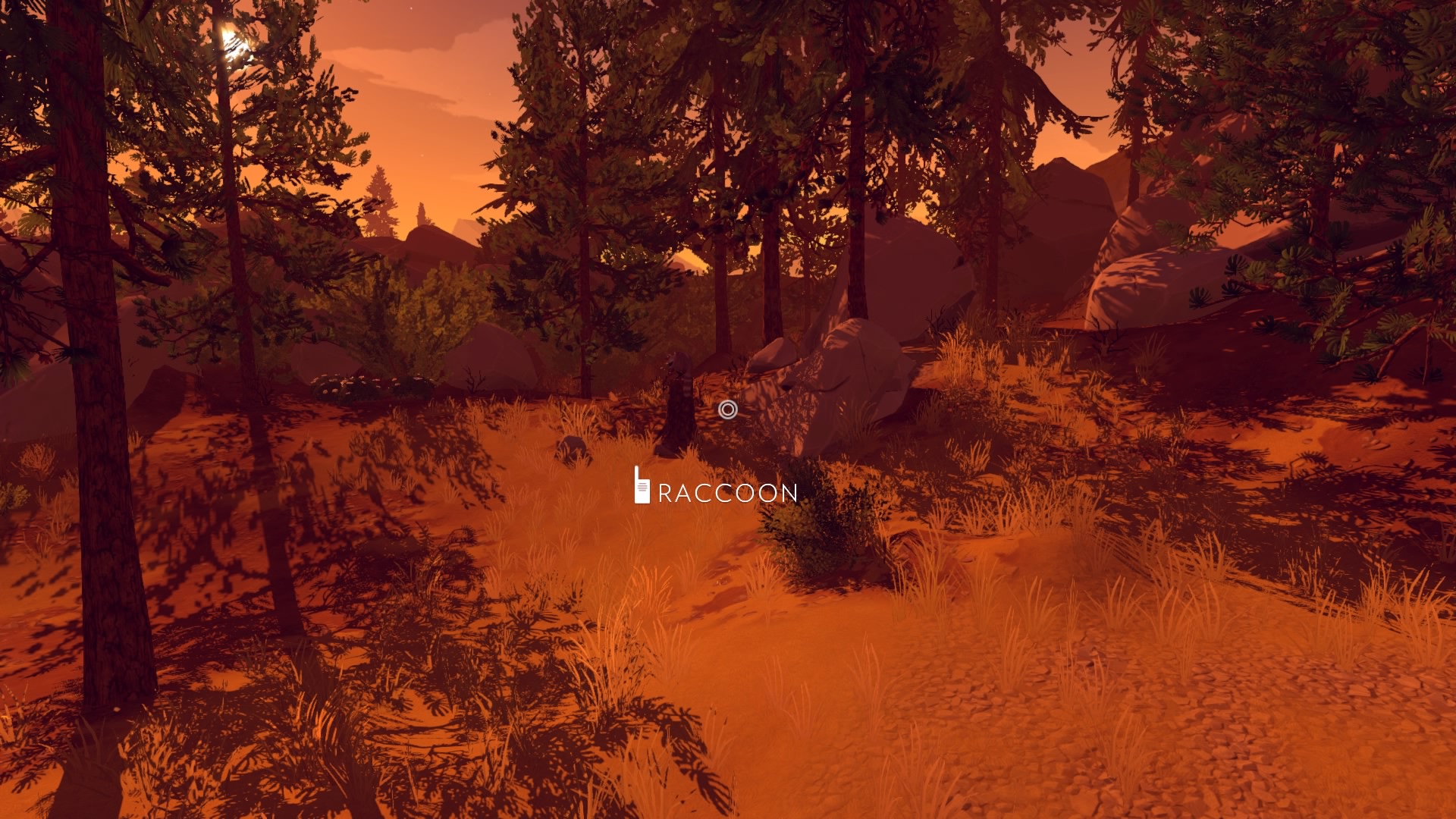 As you make your way toward the lake, you'll find two sets of women's underwear. Report the presumably naked women to Delilah, and marvel at how much she legit does not care. Your mission is unchanged.

When you finally get to Jonesy Lake, the ladies in question are too far away for you to see anything compromising. Stand on the shore of the lake and look out at the rocky island in the middle of the water. The two shadowy figures waving sparklers are the drunk teens you're looking for. 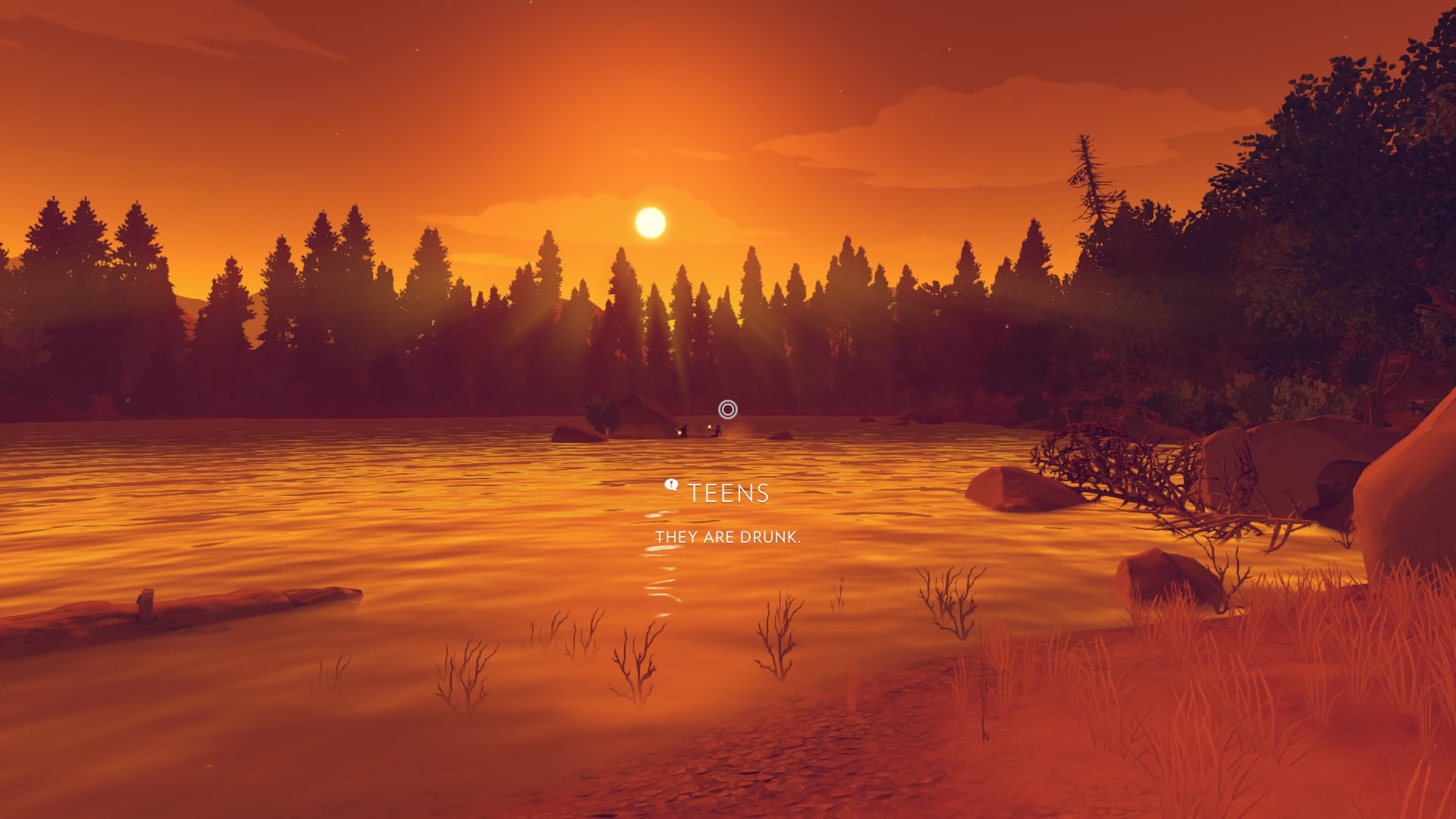 Yell at them until they leave … or just loiter until they get creeped out and make themselves scarce. Either way, they're gone now.

Optional: Jam to some tunes

Just northeast of where you came out of the woods is the boombox the teens brought to the lake with them. You can pick it up and enjoy the sweet ‘80s-style grooves until you need your hands again … or you can throw it in the lake. If you grab the boombox before or during your conversation with the teens, you get some additional dialogue options about how expensive it was.

Time to head home. You can't get back up the shale slide without a rope, so head north and then east into Thunder Canyon. Delilah will chat with you as you hike and the sun sets. Eventually you'll come across Cache 303, where you can update your map again and grab a flashlight. 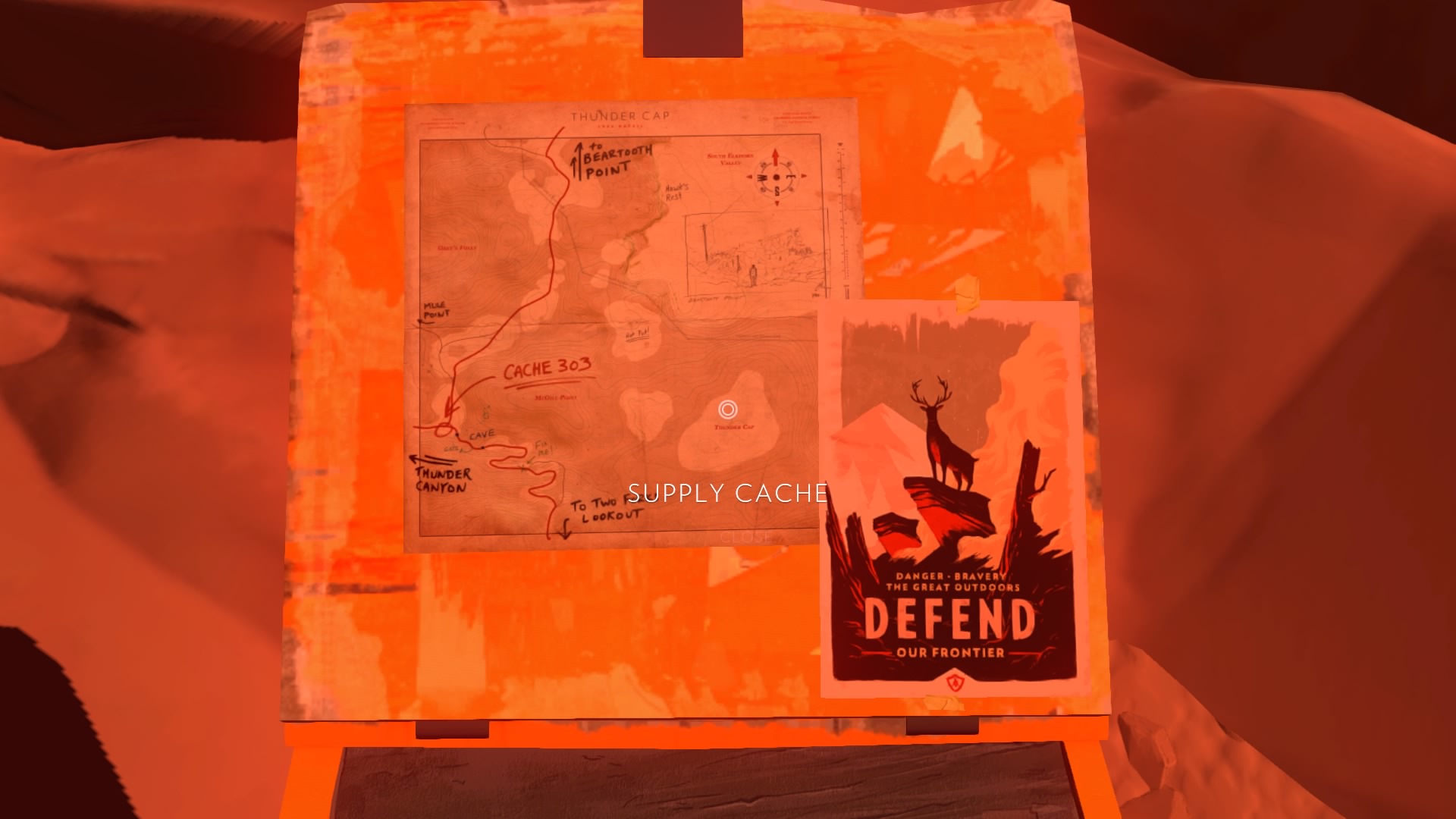 Optional: Talk to Delilah about the deer antler

Inside the cache box is a deer antler. Not terribly useful … or is it? (No, it is not.)

Head into the cave and chat with Delilah about the locked gate. You can opt to play with the cave's echo while you're inside — and yes, the three times you can select this option give you three different sounds, so try them all while you're there.

Climb out the other side. You'll spot a shadowy figure shining his flashlight on you. Delilah doesn't think this is anything for you to worry about, and by the time you climb to where the figure was standing, he's gone. 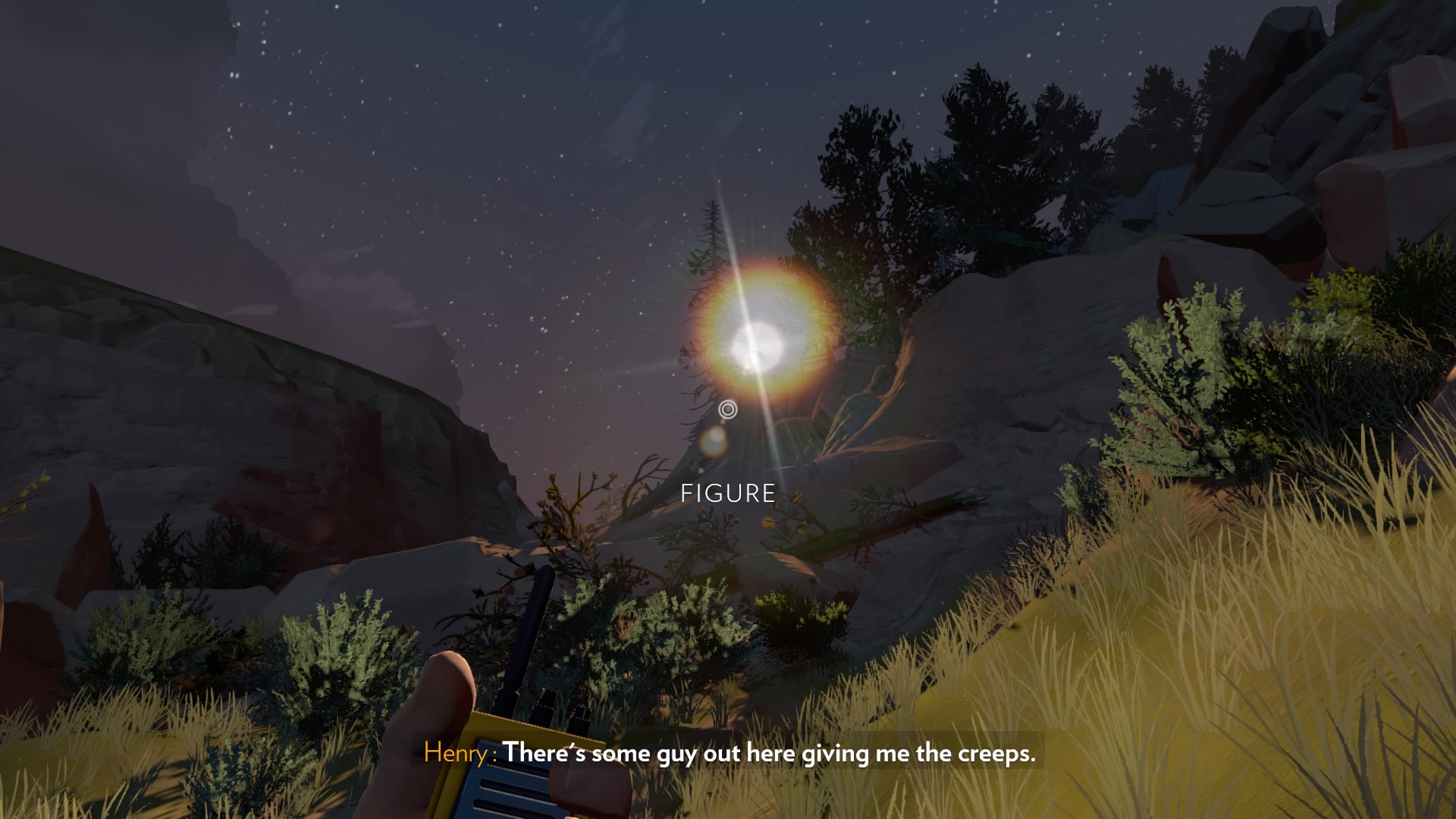 Keep working your way down the winding path back to your watchtower.

On your way back, you'll accidentally break a trail closed sign to the north of your watchtower. Let Delilah know the good news that the trail is open again.

Optional: Talk with Delilah about the outhouse

The outhouse is in the same clearing as your watchtower, just to the north.

Optional: Talk with Delilah about the generator

The generator is right next to the outhouse.

There is a big cutout sign featuring Forest Byrnes behind the outhouse. Neither you nor Delilah are fans of the cartoon ranger.

When you get back to your post, you discover your typewriter on the ground outside — someone's broken into your place! Let Delilah know as you rush upstairs to survey the damage. When your conversation with her ends, so does Day 1.