Alice Through the Looking Glass review: An unsalvageable mess

There's a reason that some movies should be left as singular entities. Not everything needs a sequel, to be a part of a franchise or has to build a cinematic universe around itself to mean something.

Alice Through the Looking Glass, the sequel to Tim Burton's 2010 Alice in Wonderland, isn't just outstandingly boring and mediocre, but there seems to be little reason for it to actually exist. The characters take a two-hour journey through the mystical land of Wonderland, but don't experience any growth. The blatant manipulative tactic to get audiences to care about someone we didn't the first time around just screams of desperation.

Alice in Wonderland itself felt unnecessary when it was released, so it's baffling why Disney would think the film needed a sequel six years later, but here we are.

Unfortunately, the result is just as disappointing as to be expected, with little to be excited about and even less of a reason to watch this in theaters.

Quite frankly, no one should have to suffer through this film

The biggest problem with Alice Through the Looking Glass is how plain and uneventful the movie is from beginning to end. It tries to make itself appear grand, using the magic of CGI to create a world that appears semi-inviting, but even that manages to fail spectacularly. Everything that appears on screen feels like it's been done before and it's hard not to sit through the entire film without questioning why we needed this movie in the first place.

Alice Through the Looking Glass follows the blonde-haired adventurer, played by Mia Wasikowska, as she reenters Wonderland after leaving the fantastical land six years prior. Upon reuniting with all of her friends, however, she learns that the Mad Hatter, played by Johnny Depp, is suffering from a terrible bout of depression over the loss of his family and only she can travel through time to try and bring them back.

Along the way she meets a cast of new characters, including Time himself — played less obnoxiously than one might expect by Sasha Baron Cohen — and learns the valuable lesson that while you cannot change the past, you can always learn from it.

For those that might not remember, that's also one of the themes from the first movie: learning from your past and embracing that knowledge to change the future. It's what led Alice to finding her hidden courage in the first movie and it's what leads her in the sequel to going on a whirlwind adventure by herself. 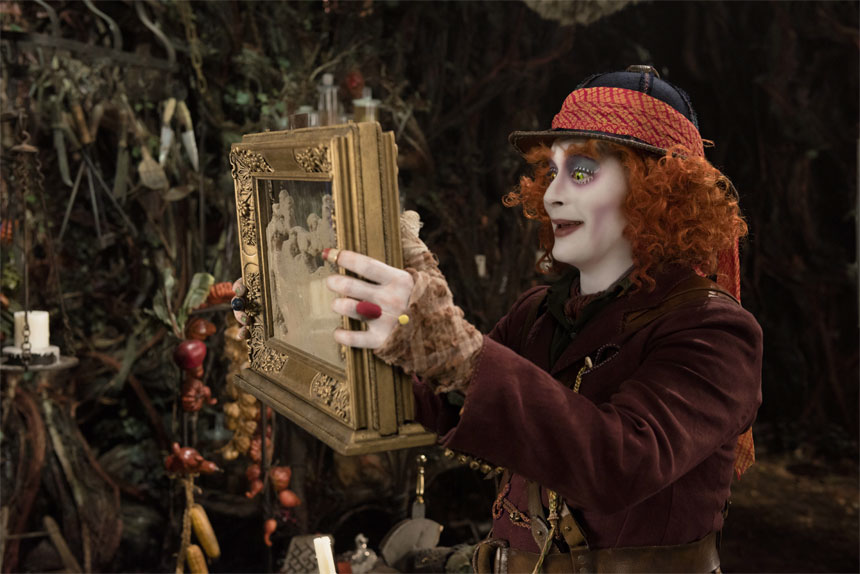 In order for a sequel to work, there needs to be a continuation of development on behalf of the characters, a reason to care about their success or failure and a more in-depth look at what happened in their lives to make them the person they are. Alice Through the Looking Glass barely delivers on the first and last part of that equation and completely skips the second aspect all together. If you don't provide people with a reason to care about whether the Mad Hatter is reunited with his family, why are people going to sit through a two-hour movie?

Quite frankly, no one should have to suffer through this film.

It would be one thing if the spectacular moments Alice Through the Looking Glass was going for were actually spectacular in any regard, but everything that happens is so unbelievably dull that it's difficult to remain focused on what's happening on screen and not think about what you should make for dinner instead.

There's no reason a movie like this needs to be boring. There aren't any rules governed by reality that it needs to abide by; for example, Alice doesn't have to worry about the fact that time travel isn't real because she exists in a world where everything and anything is possible. But if there aren't any limitations on what she and her comrades can and can' do, why does it feel like they're restricted to doing only the most redundant and boring feats?

Simply put, the movie is a mess. It doesn't know how it's supposed to exist in a world founded by Burton in 2010 and while trying to find some kind of cohesive way to continue the story, just ends up repeating many of the same mistakes the first one did.

There is, however, one aspect of the film that I will commend Disney and director Bill Condon for, and that's its portrayal of women.

Alice Through the Looking Glass finds Alice captaining her own ship and cast of men as she travels around the world, looking to conquer various lands as part of the British empire. Her attempts to continue to lead an extraordinary, solitary life at sea are almost ruined by a man who'd rather see her unhappy than use her talents to help their country.

When Alice isn't in Wonderland, the story focuses on her constant conflict with him and her conversations with her mother, who would like to see her act how a proper lady should in that time period. Alice, however, refuses to be silent and abide by the archaic rules that are enforced upon her, choosing to fight the both of them the entire way until she can get what she wants. At one point, she's admitted to a psychiatric ward and diagnosed as suffering from female hysteria, a common "affliction" that women were misdiagnosed with by doctors during the early nineteenth century, for attempting to break out of the mold.

The idea that Condon tries, rather successfully, to get across is that the early nineteenth century was not a great period for women who didn't want to abide by societal rules imposed on them. Instead of making Alice a victim to her time period, Condon uses her as one of the first renegade icons to take on those now ridiculous ideologies.

Everything that happens is so unbelievably dull

Unfortunately, the portrayal of Alice as a renegade character, a bottle rocket of determination and fight, doesn't do much to save the movie. It was nice, however, to see the film embrace and explore the idea that a led female character could succeed despite living in an oppressive society that doesn't want her to.

Alice Through the Looking Glass could have been something, well, if not spectacular, at least decent, but it doesn't even manage to accomplish that. There's little about this movie that warrants buying a ticket to see it in theaters, and there's even less of a reason to seek it out once it's available on demand or through Netflix.

The bottom line is that there was no reason this movie needed to exist outside of Disney hoping to make some extra cash off of it and those holding nostalgic adoration for Burton's original movie. The cash grab is blatantly obvious and neither Disney nor the cast of the film appear to even try to hide it.

Alice Through the Looking Glass is a disastrous result of an industry that doesn't believe a film is successful unless it has a sequel, even if that sequel reeks of rancidness upon its release. Alice went through the looking glass and disappeared into an entirely new world, leaving the real world behind her. It's a shame she came back.