Ten years ago, Blizzard never would have made Overwatch.

This is not a knock on either the company or the game. It's simply the state of the industry right now. Blizzard was once known for its juggernaut of an MMO and other big-budget sequels. What became Overwatch began life as a game from that era. Titan was an epic, sci-fi action massively multiplayer online game in the vein of World of Warcraft, designed to operate on the scale of that behemoth.

But over the course of almost a decade, Titan became a boondoggle, doomed in fits and starts to become one of the most whispered about failures of the modern gaming era. And by the time Blizzard canceled Titan, the industry had changed. Blizzard had started focusing on smaller projects, games like Hearthstone and Heroes of the Storm, which are easier to support and create new content for. But from the ashes of Titan, Blizzard found Overwatch. A continuation of the same philosophy behind those smaller projects, Overwatch is a tighter, more focused multiplayer shooter that strives to do just a few things — but it does them very, very well.

Overwatch the latest in a long string of hero-centric action games that have been dominating the video game world these last few years. Blizzard's take on the genre is a shooter with an emphasis on class synergy and cooperation. In the world of Overwatch, lone wolves are left to die.

As a multiplayer shooter, Overwatch follows in Team Fortress 2's footsteps pretty closely, sticking with simply defined objectives in matches. Every match is some variant of "capture this point" or "defend this point." While not wholly original, these basic objectives accomplish one important thing: They force constant clashes between a wide range of bizarre heroes, all striving for the same strip of land.

Overwatch’s cast of characters is staggeringly diverse, even within their basic classes of Offense, Defense, Tank and Support. Take two Tank characters, for instance: Roadhog and Winston. Tank characters are identified by their massive size, and while both Winston and Roadhog are unquestionably large and have a ton of health, that's about where the similarities end. Roadhog is a slow-moving, post-apocalyptic pig man (seriously) with a hook to drag people within range of his shotgun. Winston is a hyper intelligent gorilla from the moon (seriously) with insane mobility thanks to his leap and a defensive shield that helps keep the team alive. That sort of diversity is especially impressive when you consider that it extends across the 21 currently playable characters in the game (with more planned to be added at some point after release).

Granted, some of these characters do fall into familiar archetypes. Soldier: 76 plays like he just walked out of a Call of Duty game, and Torbjörn has a lot in common with Team Fortress 2's turret-building Engineer. But, more often than not, these characters feel unique within Overwatch itself and are extremely fun to play.

While I easily found intense matches while playing as an Offense character, I was surprised to find that my enjoyment extended to playing as supports and healers. Unlike most healers, where your task is simply to follow someone around giving them the occasional buff, healers in Overwatch must constantly juggle responsibilities and opportunities. Zenyatta, a robotic yogi, is able to toss two metallic balls, one for healing friends and another for weakening enemies. Each game ends up feeling like a hellacious balancing act, trying to keep your friends alive while they take down targets you've marked.

Abilities designed around teamwork are common throughout the entire cast. Mercy, another healer, is essentially harmless on her own. She's slow-moving and has a puny pistol. But if she targets a friendly player, even across the map, she can unfurl her wings and slingshot over to that player faster than any other character in the game. She can place herself right in the thick of an objective, heal a Tank and make them an unstoppable combo.

These character combos add depth and strategy to Overwatch, following the easy-to-learn, hard-to-master adage. The downside is that new players may be frustrated as they begin their journey. This may be a consequence of all players essentially starting from scratch, but more than half of the games I played in Overwatch felt like absolute blowouts, where nary a single objective was captured.

This makes for a frustrating experience if you're on the losing team, constantly running into an unbreakable wall of turrets and space gorillas. And if you're on the winning team, winning this way feels boring. Some of the blame for these upsets presumably falls on matchmaking, which is struggling to determine who is good or not as Overwatch launches.

But some of this also falls on Overwatch’s map design. Certain maps, such as a snowy Russian military base or a Japanese village, are oriented around single chokepoints where the attacking team must stream into certain death. Upon crossing these chokepoints, these maps open up and offer multiple attack routes to the objective, but getting through that first hurdle is a frustrating endeavor.

These hurdles are particularly tricky to overcome when you're playing with randoms that don't feel like cooperating. Since Overwatch is so focused on teamwork, playing alone is pretty miserable. While there are emotes to indicate your request for a timely heal or to group up, you'll regularly run up against a squad on voice chat who is dialed in to ensuring you won’t survive more than 10 steps.

This is less of an issue in series like Call of Duty, where a single player can swing a match with some impressive streaks, but that's really not possible in Overwatch. Unless you're able to convince your friends to join you on this journey, you're going to have a tough time. With just two or three friends, though, the game becomes immeasurably more tactical.

When you're not busy strategizing with your friends, you may want to take a minute to enjoy the beauty of Blizzard’s art direction. The game is bursting with color and looks more like a new Disney XD show than a dark, gritty shooter. Even "scary" characters like the undead Reaper spout pop culture references and sport goofy alternate costumes. Maps are set around the world and feel equally bright and fun, with sun-dappled Grecian streets to a steampunk London subway system. For a game that's about all-out slaughtering the other team, it's refreshingly Pixar-ish...without the heartbreaking "dead wife" scenes.

If you end up falling in love with these characters and this world, you'll be surprised at how little backstory there is to find within the game itself. Discovering the story of Overwatch requires heading online and watching Blizzard's incredibly well-produced (if stiffly written) shorts on the world and its characters. (You can also catch up on the lore right here.) Within the game there's almost no backstory beyond an introductory cutscene that lays out some vague basics.

If you don't care about the lore (after all, you've saved the world before, haven't you?), you may ask yourself what's forcing you to keep playing. That feeling of "just-one-more-game" exists, simply because Overwatch is so well designed, but it's hard to wait out miserable blowouts, especially when there's very little to "work" for. Upon leveling up, players are granted loot boxes which unlock a variety of cosmetic upgrades. Unfortunately the vast majority of loot box rewards are dull accessories I never used, such as spray paints or player icons. Alternate character skins are somewhat common, but the rarest legendary drops only come around about once in 15 boxes. Without paying real money, that could easily take 10 hours to earn just through playing, and even then there's no telling whether you'll actually like the skin you unlock.

This frustration is slightly eased by the ability to earn coins out of loot boxes. You can spend that currency on anything in the game, though it's going to take a while to build up the sums you'd need to unlock some of the cooler skins.

This is a long way of saying that Overwatch places a heavy emphasis on in-app purchasing if you're looking to customize a handful of characters. This practice has become the norm in free-to-play games, but seeing it in a $40-60 title is discouraging. Even Activision's own Call of Duty: Black Ops 3, which offered a similar system, had dozens of cool unlocks tied to player skill. Overwatch has hardly any.

Overall content is equally limited in Overwatch. Compared to competitively priced shooters, there are considerably fewer modes (just three King of the Hill variants) and no campaign mode to speak of here. Even with 21 playable characters and 12 maps, it still ends up feeling like a barebones package against the competition, at least at the game's launch. 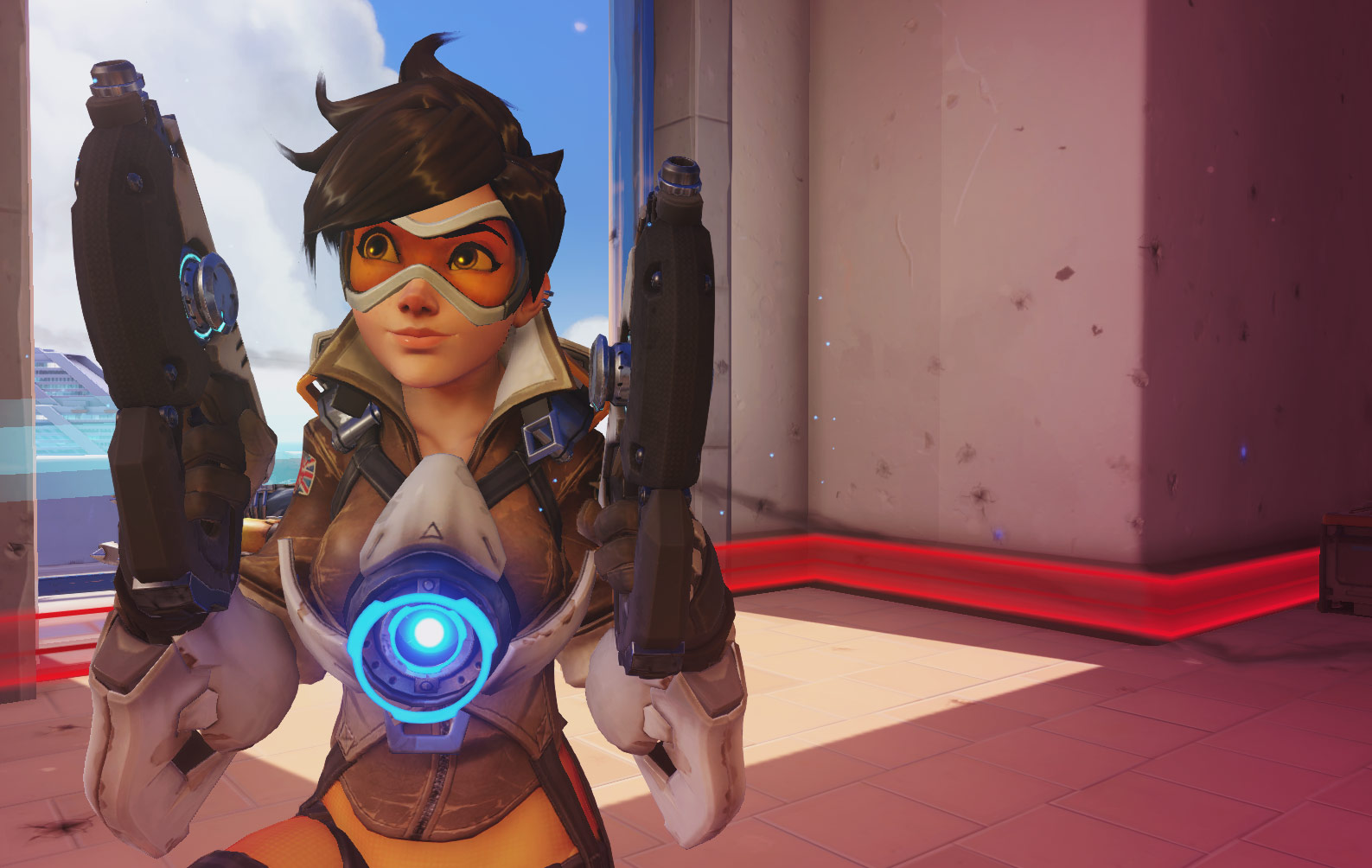 While the PC version of Overwatch can be run at much higher resolutions, all versions of the game are graphically pretty comparable and on-par with one another, running at a steady 60 frames-per-second.

It does feel, though, that the console version got the short end of the stick in some areas. A majorly annoying omission: Console players can't bring their party with them if they decide to leave a game. On the PC, this is an option, but on console, the only way to leave a game is to leave the party outright. This becomes especially annoying as friends filter online and request invites, since each invite essentially requires another disbanding.

Another unfortunate issue: If you're playing on PS4 or Xbox One and friends request to join your party, you'll be given a pop-up to hit Y to accept or the N to decline. This is particularly tricky given that the Xbox controller only has the former of those buttons and the PS4 controller has exactly none of them. Whoops!

Overwatch can be great, but needs friends to back it up

There's no question that Overwatch is a masterfully designed game. The wide array of amazing, unique characters, and the original ways they interact with one another, make for a peerless teamplay experience in the shooter space. Some issues, like a dissatisfying progression system and a hostility to solo players, hinder the overall experience, but the core of Overwatch remains strong throughout. It's an easy recommendation to make, so long as you've got some friends to back you up.