The Witcher 3: Blood and Wine walkthrough: Turn and Face the Strange

Share All sharing options for: The Witcher 3: Blood and Wine walkthrough: Turn and Face the Strange

The quest begins once Geralt receives the letter from the messenger boy. Yennifer speaks of an old researcher named Professor Moreau. He specializes in witcher mutations.

Begin the quest by inspecting the map Yennefer enclosed. It will take you to a graveyard. There are many gravestones in the graveyard so you'll have to locate the one belonging to Professor Moreau. You'll find that it's been robbed. Use your witcher sense to follow the grave robber's trail.

That will lead you to the professor's laboratory in the flooded ruins of the Valley of the Nine. As the name suggests, that location is underwater. You'll have to swim around in order to find what Geralt is looking for. The ruins are right in the center of the marker on your map. Swim downward, and watch out for drowners along the way. Swim under the flooded ruin until you see a blue portal. Swim through it to enter the ruins. 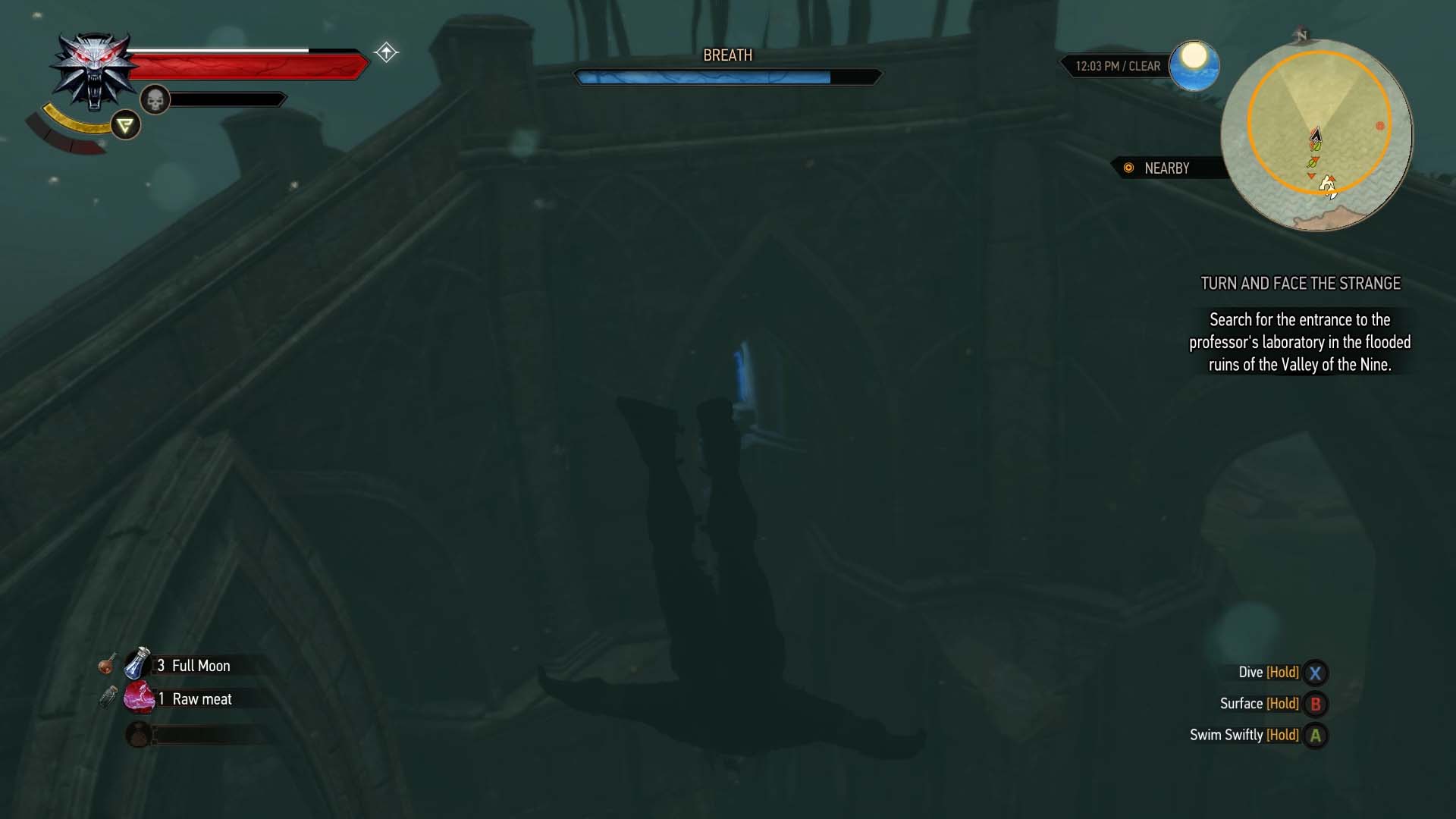 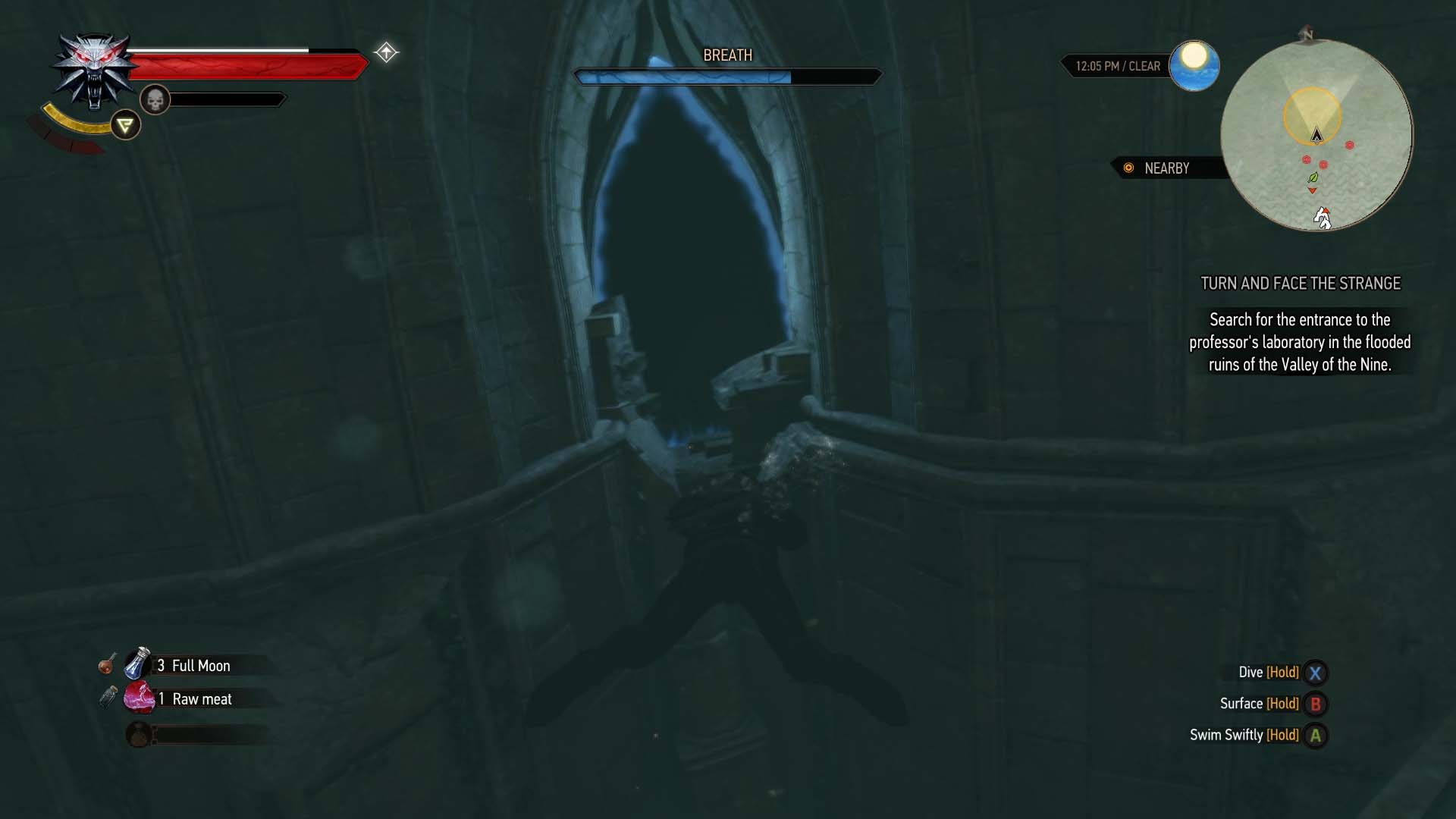 Head down the stairs to find a path of floor spikes that periodically spring upward. Rather than taking the risk, jump off the ledge to the right of the spiked path. Open the chest below the ledge and to the right to find Toussaint Color Guardsman's Boots. Once you have those, follow the cliff that is just under the spiked walkway until you safely reach the other side. You can go back up that walkway to get past a smaller walkway of spikes. A chest on the other side contains some consumables and the Melltith Silver Sword. It does 454-556 damage, so take the risk if that's worth it.

Head back down the stairs where two guardians will attack you. They are common panthers and are vulnerable to beast oil, but you should be able to take them down without it. In the room just past the guardians, you'll find Toussaint Color Guardsman's Armor. Before you jump in the hole in the ground to progress, head straight ahead and jump the gap in the floor.

In the next room, make a right to find a chest. The chest if filled with Dimeritium ingot, three glowing ores, two lesser glyphs of aard, crystalized essence and three florens. Now jump into either of the two holes in the ground. They lead to the same place.

Follow the path and jump on the boulder at the end of the hallway. Another guardian will be there. Fortunately, it's just one panther this time. The next room has a long rope that leads to a platform down below and a stone door on the opposite end of the room from the entrance. Witcher sense highlights two squares on the walls closeby. Shoot them with your crossbow. Each stone unlocks part of the stone door, but you'll need to find two more. One is on the wall to the left of the door. The last stone is up and directly across the chasm above the rope. Shoot them all to unlock the door.

Enter the next room, and grab the gold necklace at the base of the statue. Watch out for the gargoyle ambush. His attacks do a lot of damage, so protect yourself with the Quen Sign. The gargoyle is vulnerable to dimeritum bombs, elementa oil and the Quen Sign. Once it's defeated, loot it to get the gargoyle paw. Place the paw in the stand by the statute to activate many surrounding portals.

The puzzle is simple. You have to walk into the portal that the statue is facing. Some rooms have multiple levels, so you'll have to figure out how to get to the correct portal. Entering the wrong portal will send you back to the beginning. Here's how to get to each correct portal:

Now you're in the laboratory. Use witcher sense to explore the lab and take what you want. Find three crystals to the left of the entrance. Each crystal gives some insight on what Professor Moreau was working on: He was trying to cure his son of witcherism, but ended up strengthening him. That's good news for Geralt.

The missing ingredient in the research is giant centipede albumen. Fortunately for you, there are giant centipedes in the room next to the laboratory. Head through the crack in the wall to venture into a cave. There will be two pale widow centipedes there. They constantly burrow, so dodge when they are about to pop up. Dodge their acid spit attacks, get two or three quick attacks in and then back away. They are vulnerable against insectoid oil and Yrden Signs. Take out the two pale widows and head to the next part of the cave. There is one more pale widow to battle. Kill it and grab the giant centipede albumen. Blast through the wall at the end of the cave to wind up back in the laboratory. 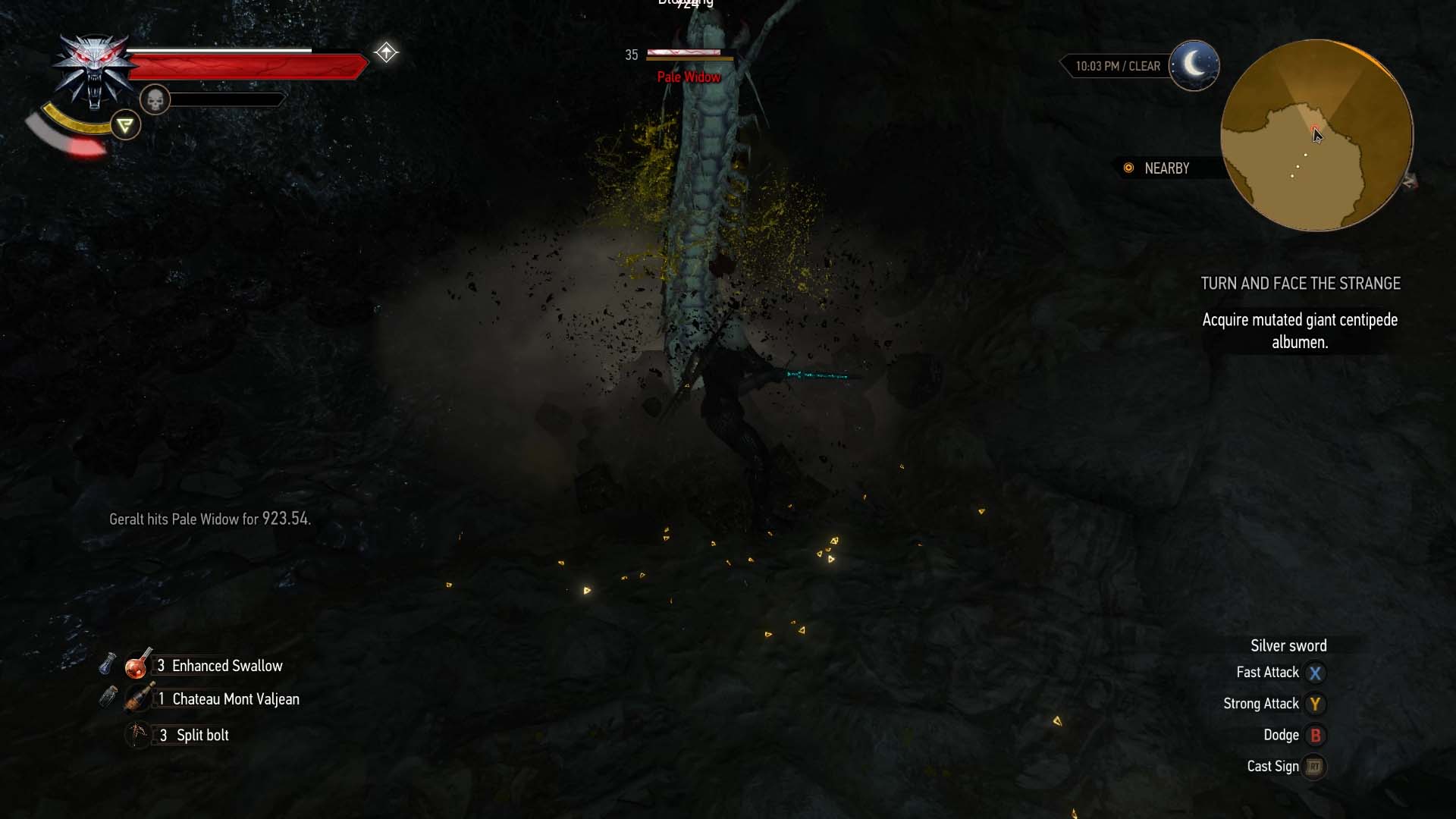 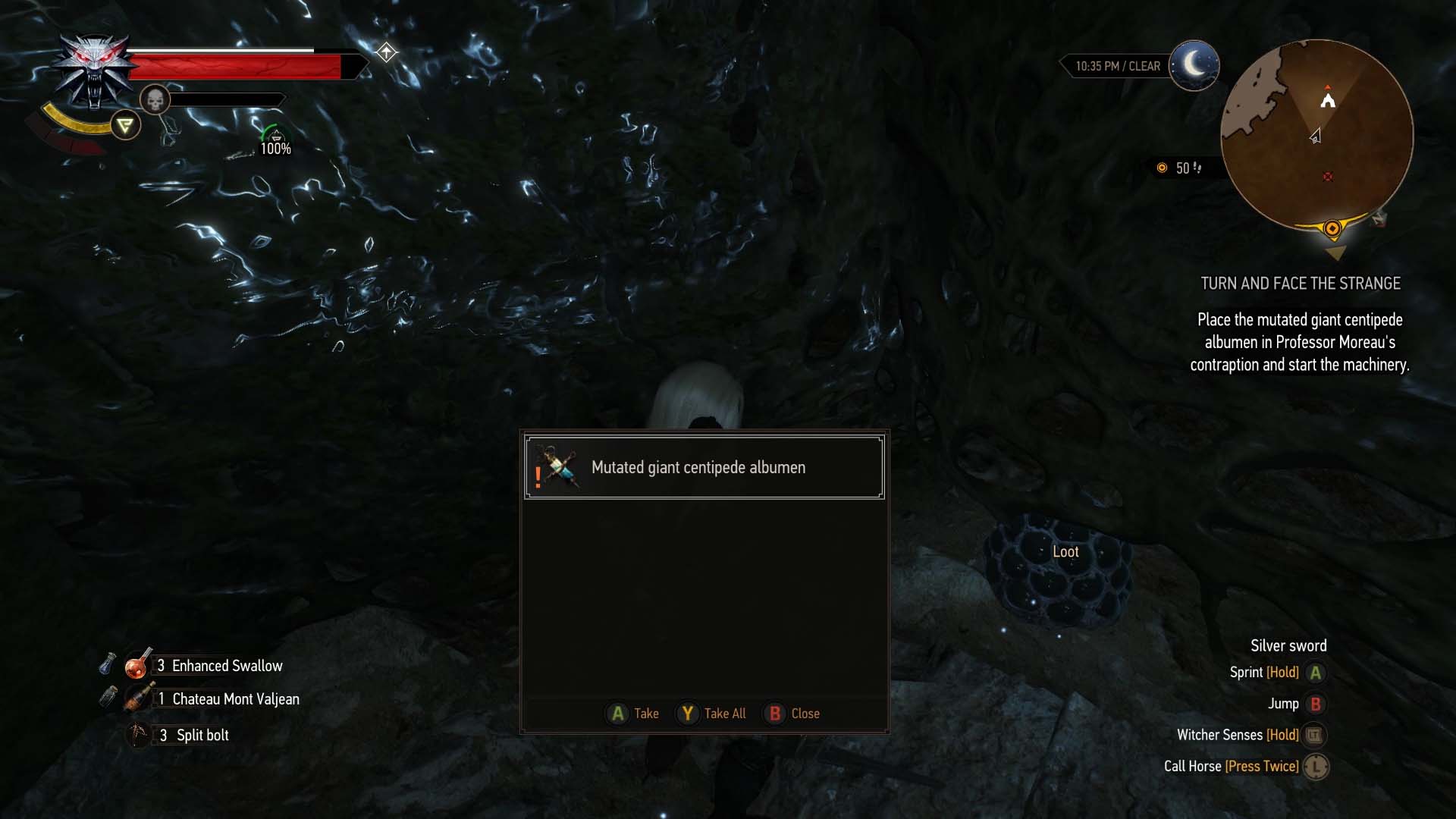 Place the albumen into Professor Moreau's machinery, take off all of Geralt's clothes (you have to do this manually from the inventory screen), and step into the contraption. The process unlocks Geralt's special mutations tree. Each mutation gives Geralt a huge edge in combat. You can purchase the powerful mutations with ability points and mutagens.

Hit the crystal on the wall with an Aard Sign blast to leave the laboratory. This will activate the exit portal and complete the mission.