After taking a few steps, you'll receive a letter from a messenger. It's from Yennefer. This will give you the quest Turn and Face the Strange, which speaks of a professor who conducted research on witchers. You can inspect the grave of the professor for this quest.

Back to the quest at hand. Make your way toward Regis' residence. Knock on the door to learn he's not home. Use witcher sense to find another way in. Witcher sense will highlight a tomb that leads underground. It's just southwest of Regis' front door.

Head underground, and kikimore workers will be waiting for you. They're vulnerable to insectoid oil, white honey and Igni signs. Be sure to use the Igni sign on any kikimore eggs you find. Once you burn the eggs, a Kikmore Warrior will pop out. It's a worthy foe that packs a powerful punch if you allow it. It's vulnerable to the same attacks as the workers. Dodge one of its attacks, hit it with a couple quick slashes and back off. Repeat the process until it falls.

Straight through the underground tunnel, use Geralt's eye to reveal an illusionary wall. If you get close enough to it, Geralt will automatically reveal it. Casus Foederis, a silver sword, is behind the wall as is a letter for a side-quest called A Knight's Oath.

Continue onward to meet with Regis who will give you some more insight on Dettlaff. Regis needs Geralt's help in concocting a potion to aid in finding Dettlaff. The first ingredient is saliva of a spotted wight. To prepare, spotted wights are vulnerable against Yrden Signs, Igni Signs, and necrophage oil. With that in mind, head to the wight's lair.

In the wight's lair, find the spoon key in the room to the right of the entrance. Read the note attached to the spoon key will unlock the Spoontaneus Profits! quest. Head downstairs to the lower level and inspect the cauldron. Geralt will need to hide in the closet on the other side of the room and wait for the wight to return. Before you head there, grab the armor master items from the chest along the wall.

If this is your first time heading to Corvo Bianco after receiving the deed for the property, you'll meet Barnabas-Basil Foulty. He's the majordomo of Corvo Bianco and will give you the option to show you around. After getting the tour of the property, you can opt to buy a weapon grindstone and a armor table for 1,000 crowns each. They can be found on the property the following day. Sprucing up the property allows you to sleep there, decorate the living quarters with trophies and stash unwanted items.

Once it has been fully renovated (it takes three days after giving Barnabas-Basil the coin), head to the cellar, as Barnabas said the workers found a hidden room. Use the Aard Sign to blast the weak wall revealing an alchemy table. Corvo Bianco has nearly everything you need in your journey.

After you've finished touring your new home, head back to Regis to give him what he needs. The concoction still needs one more ingredient: the blood of the same species as Dettlaff. Fortunately, Regis is also a vampire. But, of course, it's not that simple. Regis' blood needs to be in an agitated state. You'll need to head Tesham Mutna to slay several beasts. The bloodletting should drive Regis into an agitated state. Regis will take you there after the conversation.

Once there, follow Regis into the ancient cellar. Be sure to loot the boxes and chests along the way. Regis will give you bait to place along the tunnel entrances once you reach the bottom. Place the bait on the ground. If it's covered, use the sign Aard Sign to remove the debris. Talk to Regis after you place the bait. He'll step into a cage so he doesn't harm Geralt once he becomes enraged. 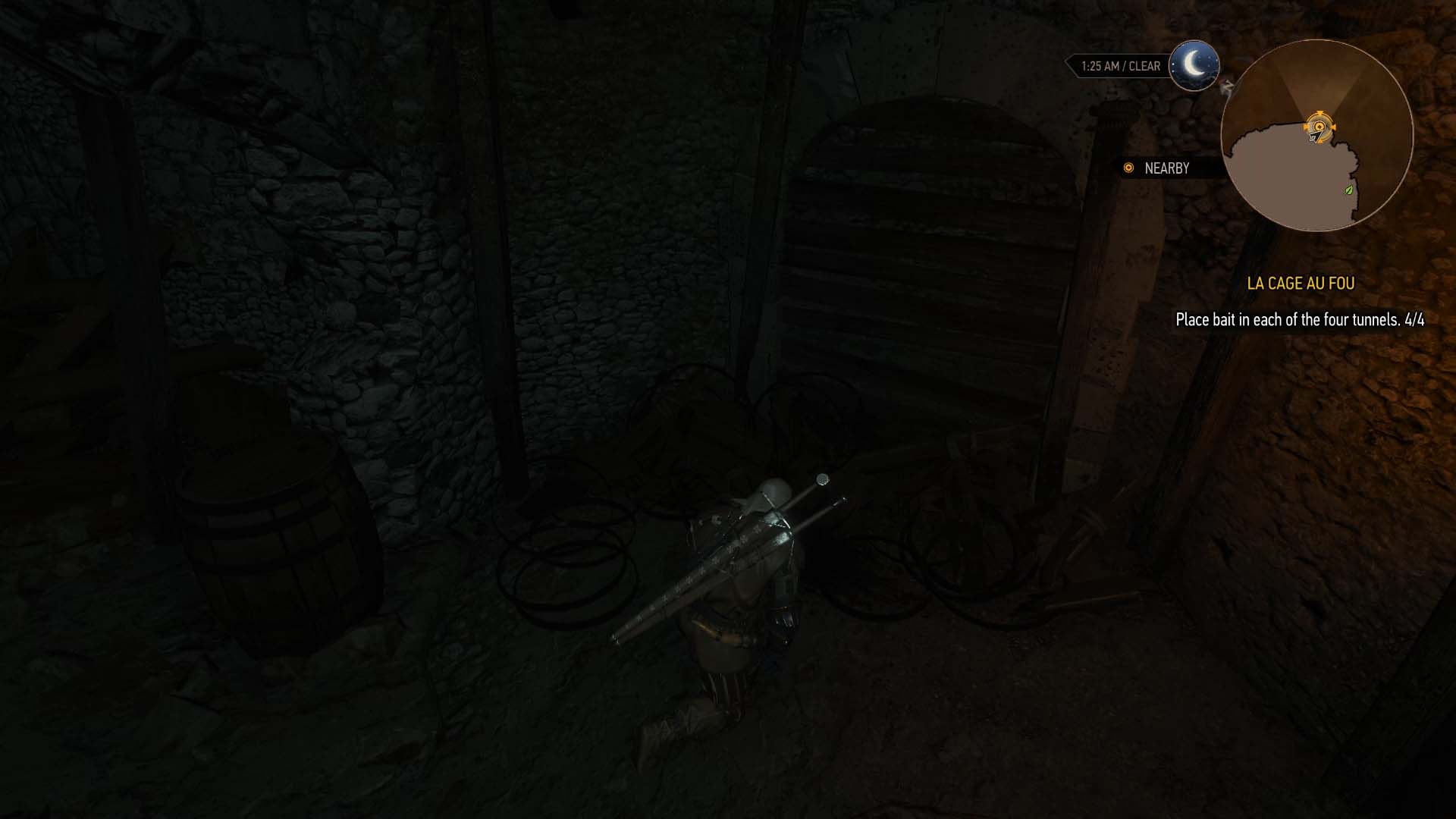 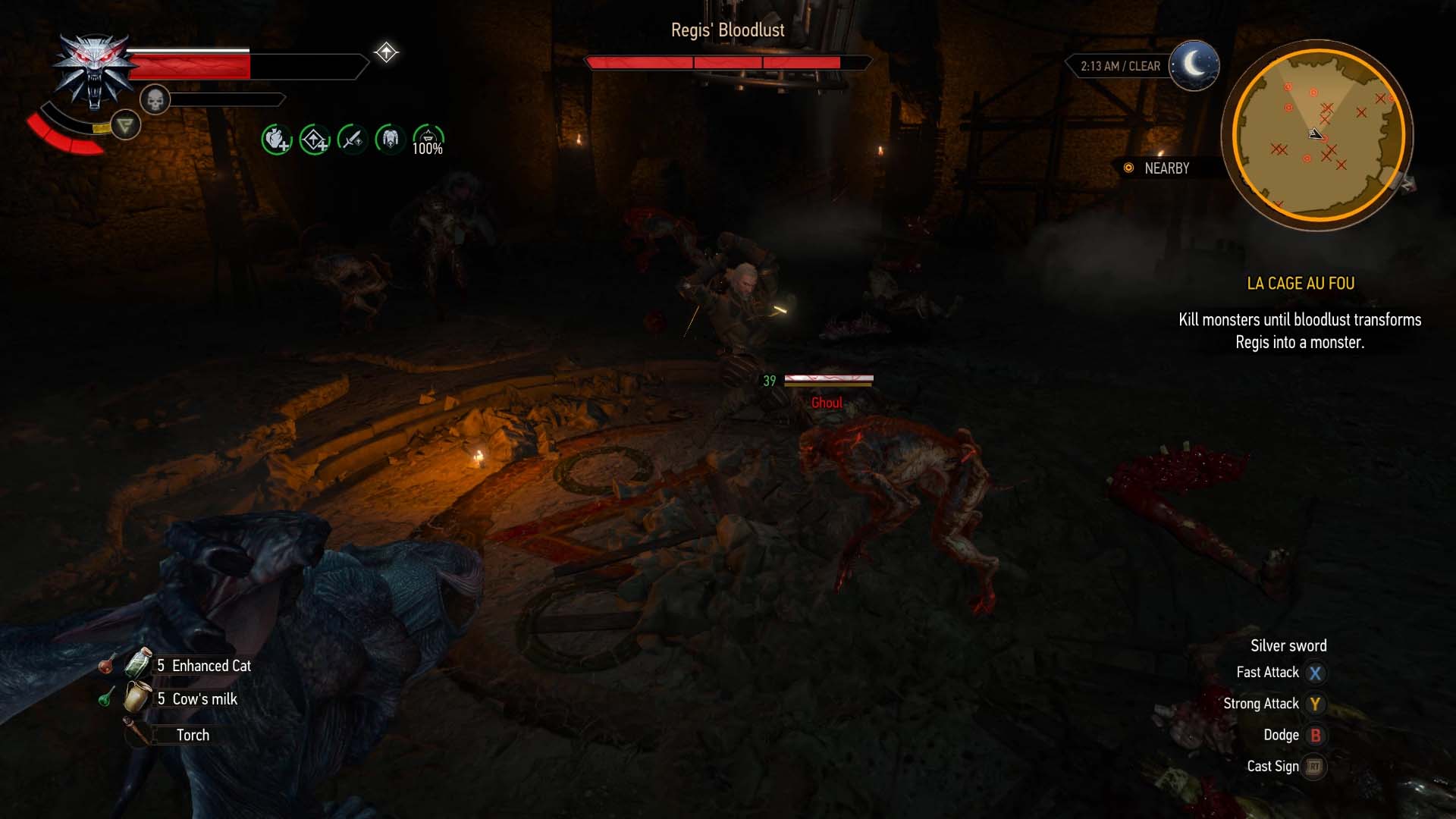 An assortment of enemies will bombard Geralt, including drowners, ghouls and scurvers. Beware of the scurvers who explode when they're near death. Since the enemies try to overwhelm you, take advantage of the Quen Sign, which will protect you from harm. Geralt's dodge is your friend in this encounter. Once Regis' blood meter is full, the fight will end, regardless if you've killed all the enemies.

The concoction is complete thanks to Regis' blood. This brings you back to Regis' home. Geralt drinks the potion, which shows him visions of Dettlaff's past and completes the quest.