The Witcher 3: Blood and Wine walkthrough: Be It Ever So Humble

Share All sharing options for: The Witcher 3: Blood and Wine walkthrough: Be It Ever So Humble

This quest will literally put Geralt in a fairy tale. Make your way through the strange wonderland. Stick to the paths. The minimap won't be much help in the beginning of this area. When you reach the broken bridge, jump down and head upstream. That's where you'll run into Syanna and the next boss: The Wicked Witch.

The Wicked Witch flies around while trying to spill hot stew on you. Just before she swoops down to spill the stew, use the Aard Sign to knock her out of the air. This is when you can strike. Hit her with a few attacks, but be sure to dodge her pot slam. That will stun you and send her back in the air. She'll summon another enemy if that happens. Kill the enemy before focusing back on her. 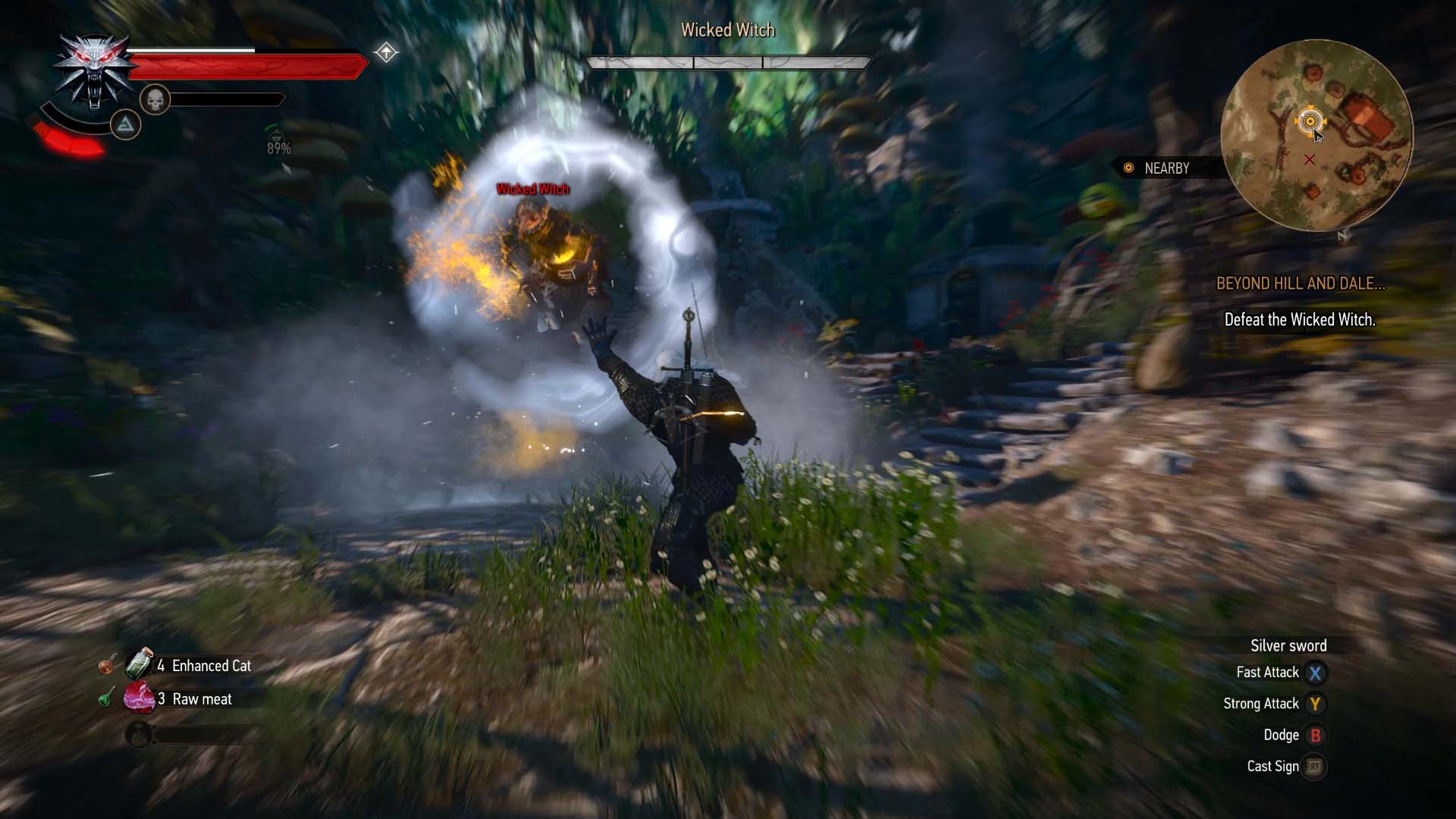 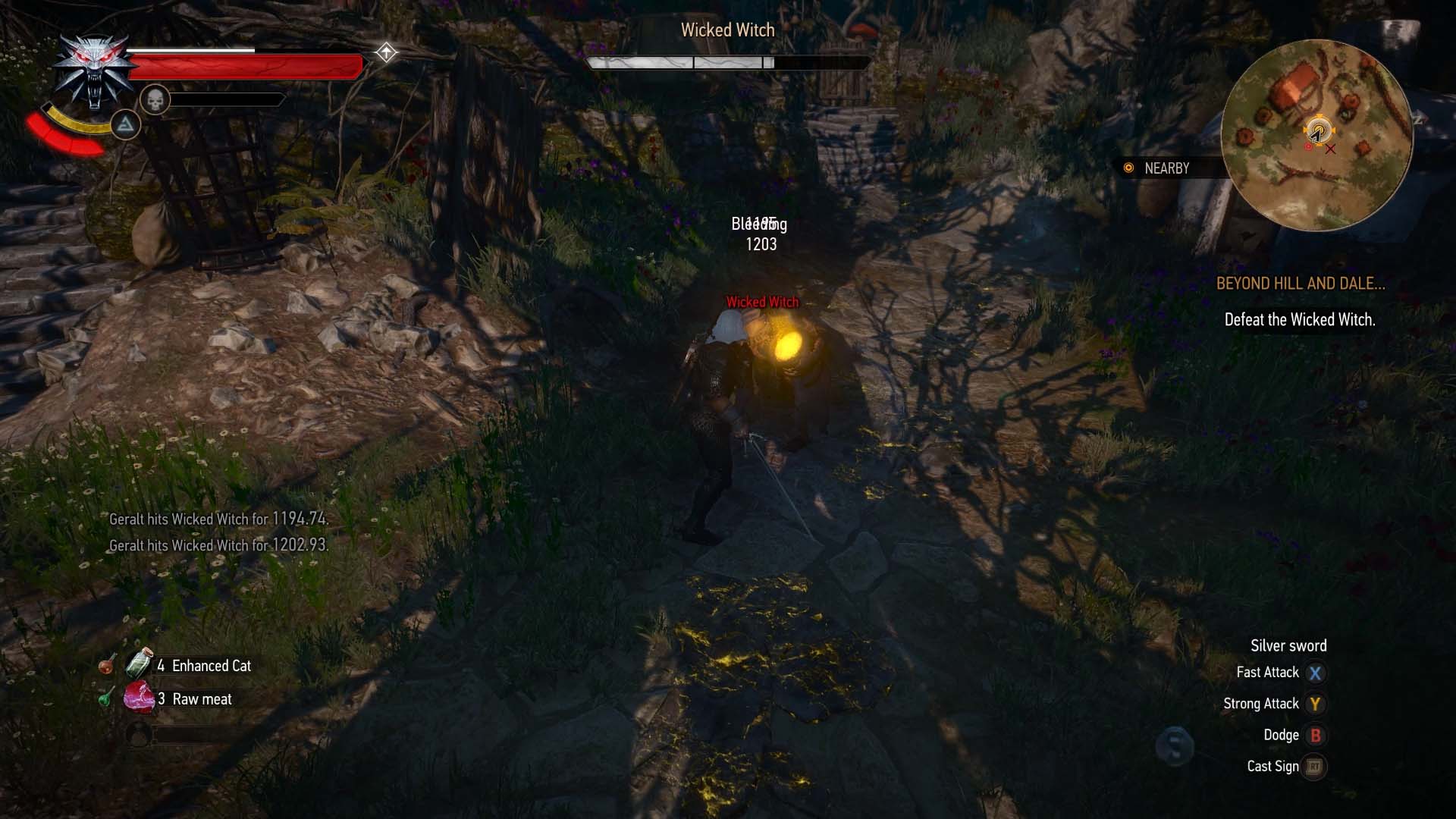 After she'd defeated, talk to Syanna to see if she can put an end to the fighting in the real world. In order to get out of the fabled world, you'll need to find three magical beans. Follow Syanna to find the beans. You'll meet pixies and wolves along the way. They aren't too difficult to take care of. Find the boy who cried wolf after killing the wolves. He'll give you some information about the beans. 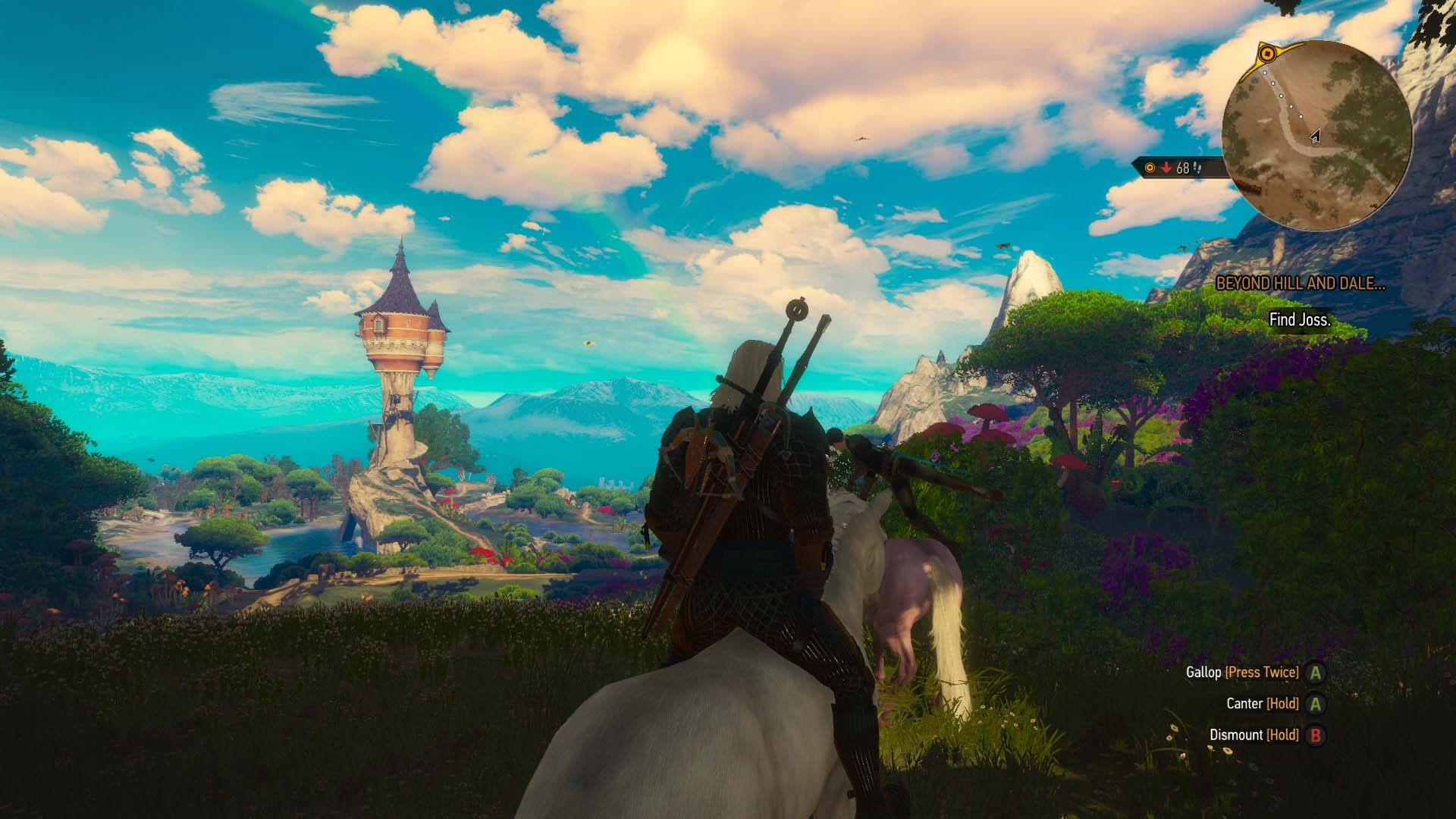 The boy who cried wolf is just one of the fairy tales you'll have to visit to find the beans. The others include the girl who sells flint, the three little pigs, little red riding hood, goldilocks and the three bears.

Find The girl who sells flint on the street. She stopped selling flint and has resorted to selling drugs. Be sure not to miss her, as she has something you will need later in the game. Talk to her and buy a ribbon that she possesses that belonged to Syanna. You can play a round of gwent for it, or pay 500 crowns. Be sure to get the ribbon one way or another. It comes in handy later. 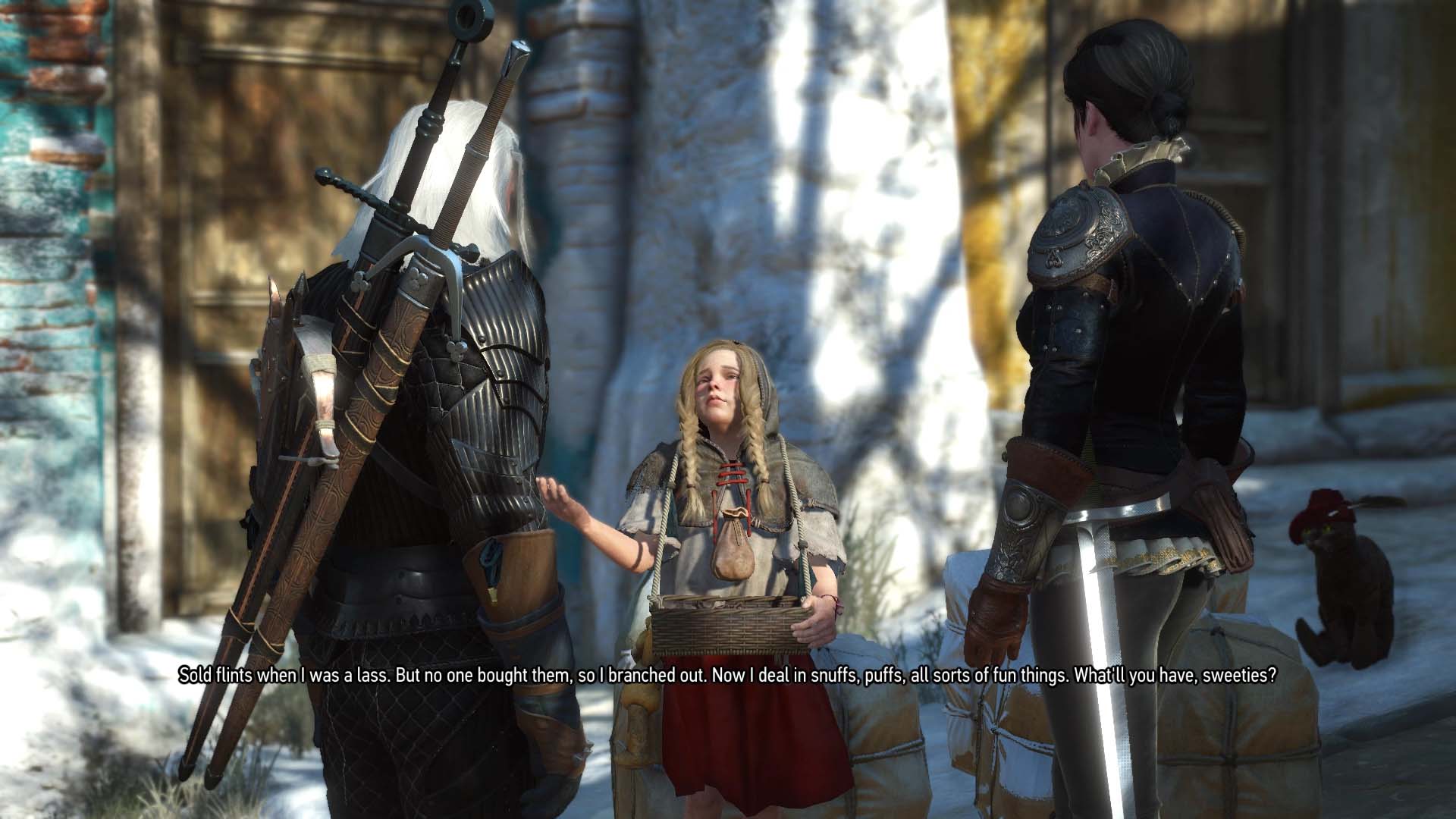 Next are the pigs. Only one house remains. Use the Aard Sign to blow the last house down. Three actual pigs will run out to attack you. Kill them and search the house for the beans. Find the blue bean in what remains of the house.

After the pigs have been defeated, check out the tall tower in the center of the world. That's where Rapunzel lives, or in this case, she's called "longlocks." Be careful while climbing. One misstep will send Geralt plummeting to his death. Once you reach the top, you'll discover Longlocks' grim end. She hanged herself with her own hair, but you'll have to battle her ghost for the yellow bean. Her attacks can be powerful, but they only come one at a time. Use the Quen Sign to give yourself some added protection against her attacks. After achieving victory, you can dive off the balcony into the water below Assassin's Creed style.

You can visit the three bears if you want to get into a fight with three actual bears, but there's no bean in it for you. The last bean lies with Little Red Riding Hood. Talk to the big bad wolf outside her house. It seems he's a drunk and a murderer. He killed Little Red Riding Hood and her grandmother. He just wants something to do in exchange for the bean. Syanna has to play the part of Riding Hood, and Geralt has to stand in as the grandmother. You'll have to get the red hood from Riding Hood's corpse. Jump in the nearby well to retrieve it. Of course, the result is a battle with the wolf. The wolf is fast, but only attacks with one hit at a time. Dodge attacks to find an opening. Once it's defeated, Geralt will slice open its stomach and retrieve the bean. 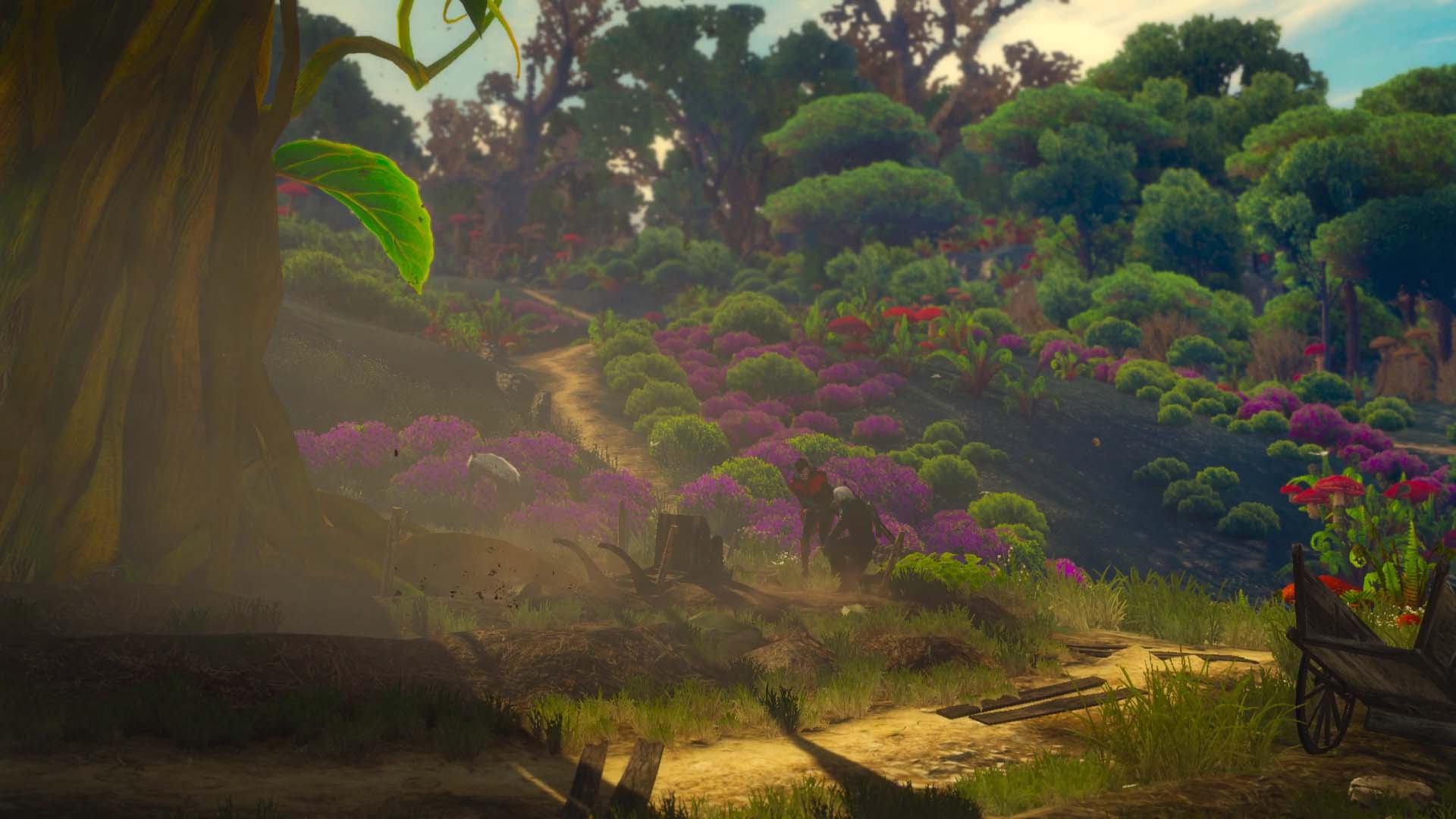 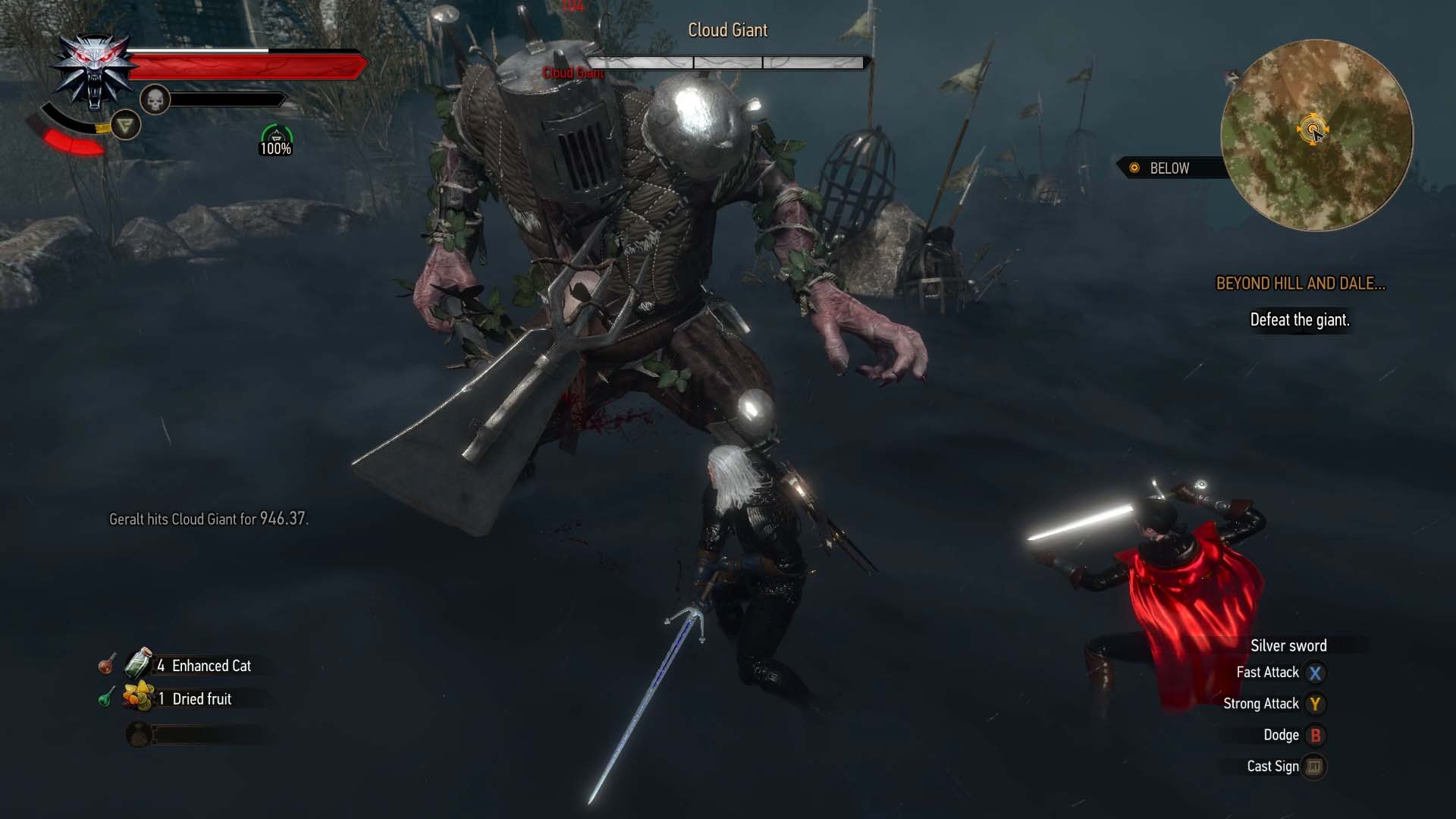 Head back to the entrance of the area to plant the beans. Kill the pixies and use your witcher sense to find the spot to plant them. Geralt and Syanna climb the beanstalk to freedom. What waits at the top of the beanstalk? A giant. Slay the giant to continue the quest. After killing the giant, Syanna will suggest she and Geralt engage in some … extracurricular activities. You can accept or refuse her advances based on the answers you give her. 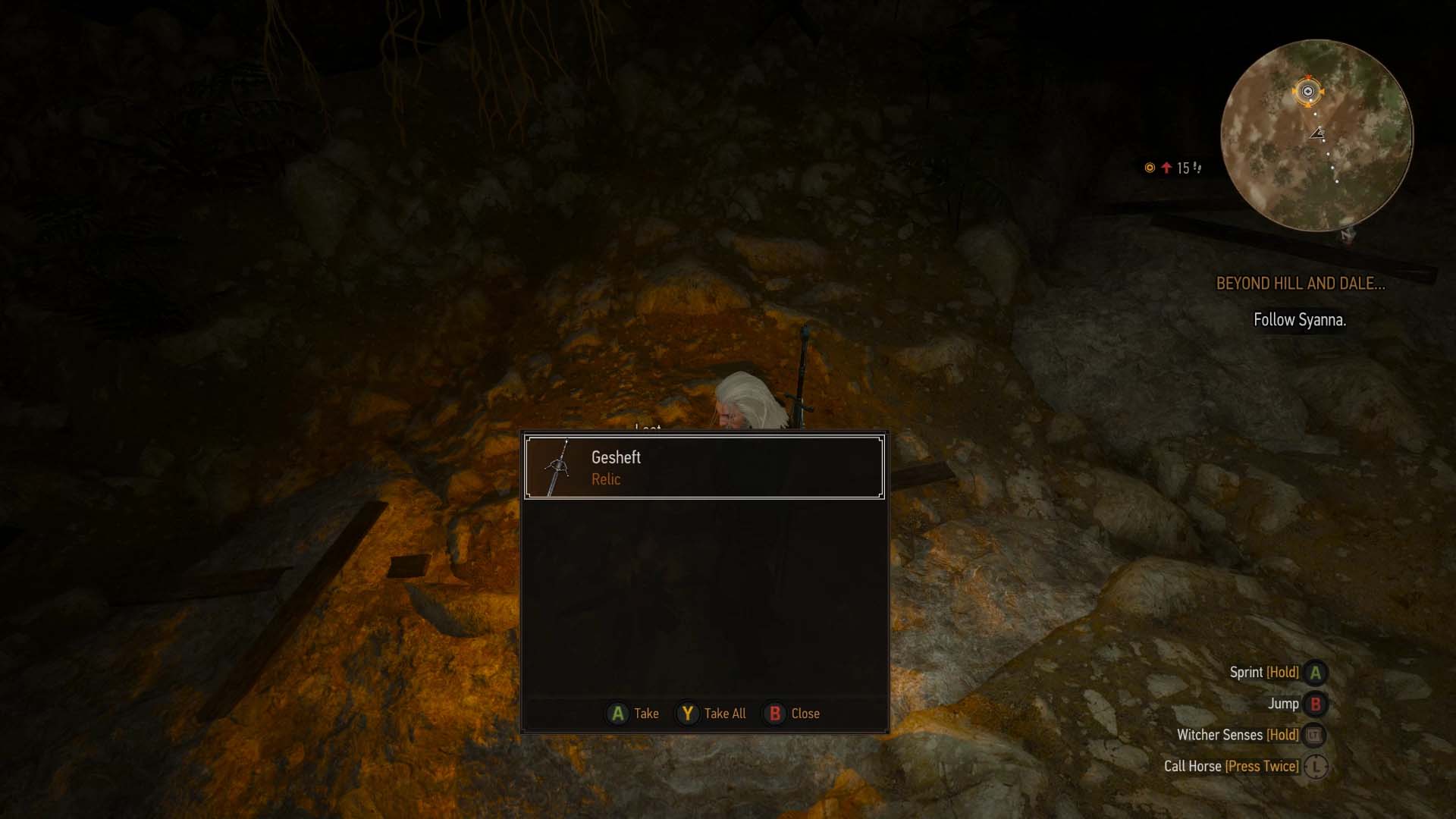 Once Geralt and Syanna have had their fun, head forward toward the castle. Instead of taking the bridge right through the front door, follow the glowing white orb called the will of the whisp. It will take you below the bridge and lead you to a new silver sword called the Gesheft. Make your way through the cave and back to the castle. Walk into the castle grounds and jump into the well, thus ending the quest.

The Night of the Long Fangs
Table of contents
Tesham Mutna